I love buying Eira toys. She always seems to know when I’ve brought home something new, and she loves to sit and wait for me to unload my shopping bags or Amazon boxes to see what new toy she got. During all my toy-shopping experiences, Playology toys kept popping up, whether in the toy aisle or online. They look like regular rubber toys, but there’s a whole section devoted to them at my local pet store. They’re also quite a bit more expensive per toy than Kong and Nylabone products, which got me curious: what’s so special about Playology toys? What is Playology, anyway?

After some Internet digging, I discovered that Playology toys are scent-based. The theory is that because each toy is infused with a certain smell, it will attract a dog’s attention for longer than your average chew toy. According to the Playology website, dogs will like scented toys more than flavored toys because they have a sense of smell that’s 10,000 times more powerful than that of humans, while they only have 20% of the taste buds humans do.

Playology uses bits of the real protein advertised on the toy and infuse it into special foam and rubber ingredients to create bones, balls, rope tugs, and chews.

Taking a Chance on Playology

I finally decided to get Eira a Playology bone to see what the fuss was all about. I chose a yellow chicken-scented bone, and immediately noticed that Playology organizes their scents by color: for example, all their red balls, chews, and ropes are beef-scented. All their yellow balls, chews, and ropes are chicken-scented. Blue is peanut butter, black is bacon, yellow is cheddar cheese.

It’s a neat marketing strategy that simplifies the choosing and buying process for the customer.

True to form, Eira was waiting for me when I got home with her new yellow chicken-scented Playology bone. 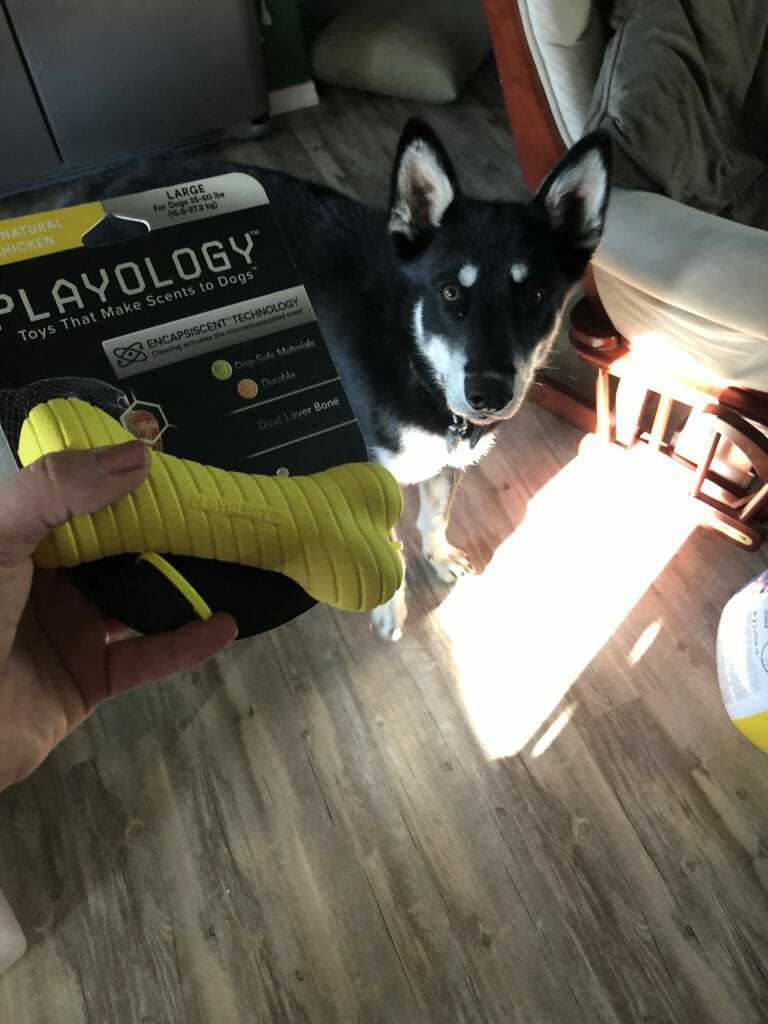 Eira waiting for me to give her her new Playology bone.

I opened it and gave it to her, and she sniffed at and then took it in her mouth. See for yourself in this video:

I must say that Eira seemed to like it, but not love it any more than a Kong or Nylabone toy. She chewed it for a few minutes, batted it around on the floor, and then left it alone.

It all felt rather anticlimactic, especially for the price of the bone. 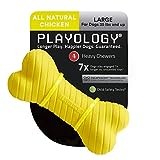 Note that the bone doesn’t smell like anything to me, which I take as a good thing! I don’t really want the smell of chicken hanging around the house all day.

The next day, Eira seemed more interested in her Playology bone. My son did, too. He threw it for her for a large portion of the morning, and she enjoyed chasing and fetching it—almost more than she fetches other toys, actually. Maybe because of the smell? She’s also less possessive about this bone than she is about her beloved Nylabones, which makes me doubt Playology’s claim that scent beats taste when it comes to dog toys. 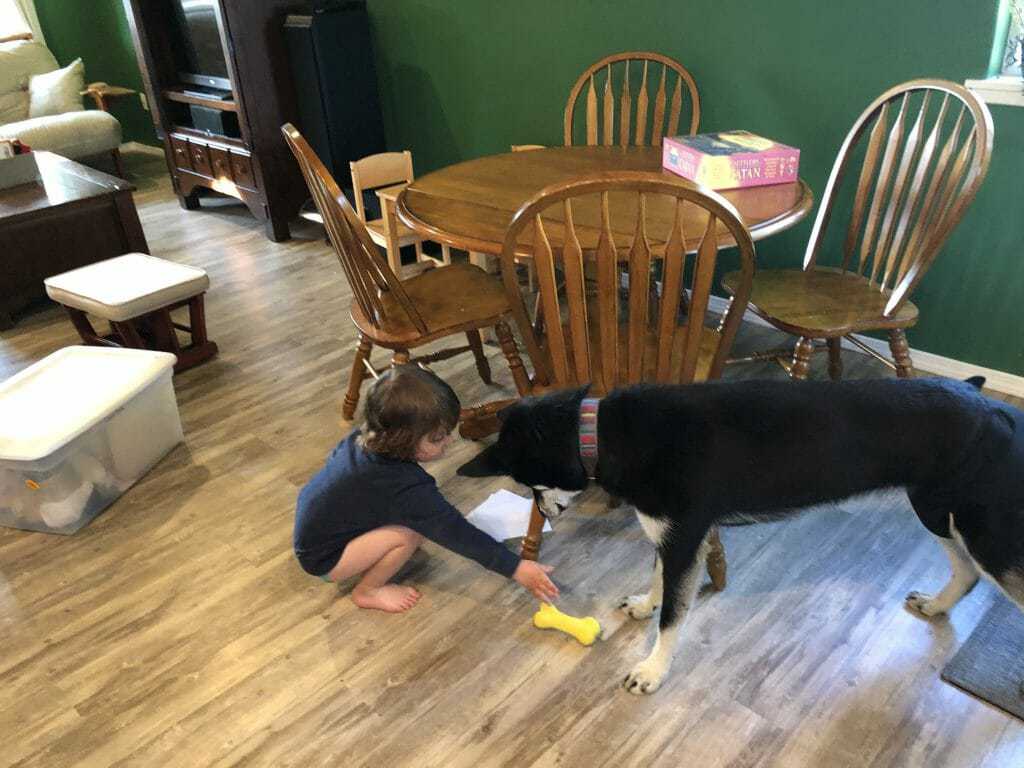 Eira and my toddler playing with the Playology bone.

Still, Eira seems to enjoy the bone. She hasn’t chewed it to bits like she does her Nylabones, but she does keep it near. This could be because of the smell, or because she just likes it. 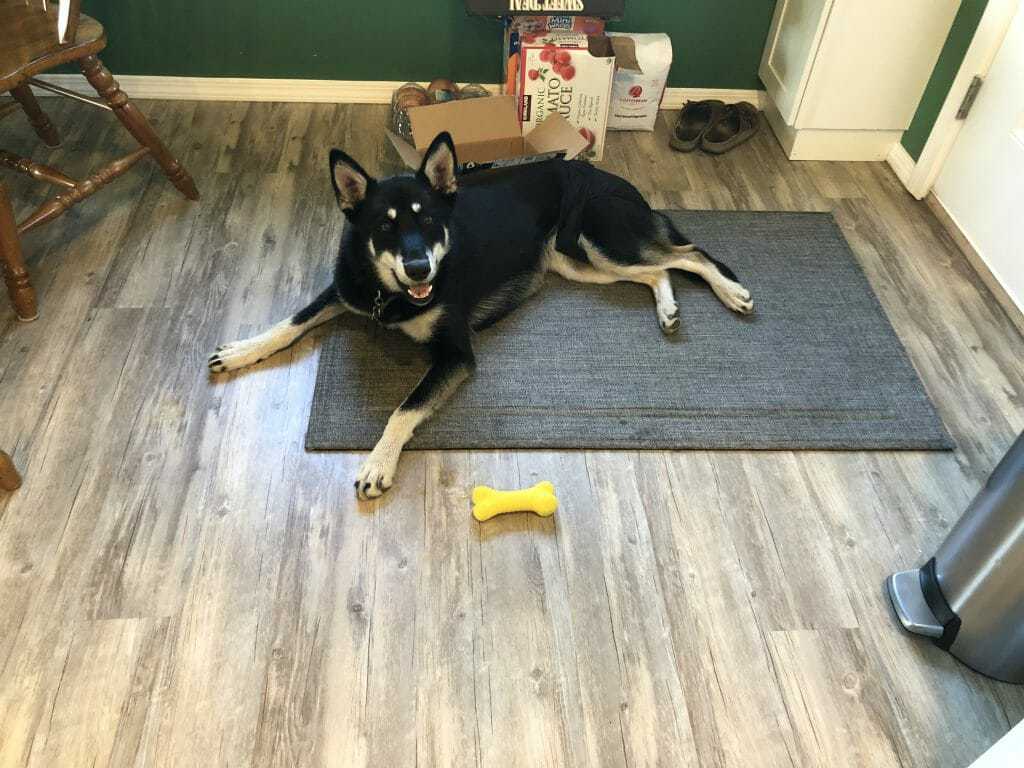 Eira keeping her Playology bone near.

From what I’ve heard from friends who’ve tried the Playology bones, some dogs seem to adore them while others play with them like they do any non-scented or non-flavored dog chew. One major benefit is that these bones and chews do appear to be virtually indestructible, so it’s possible that you’re paying for high-quality chews more than anything scent-based.

Here are the Playology chews that Eira’s dog friends have liked. I like the Playology toy’s durability so far and may just purchase a few more for that reason more than anything else.

Dogs apparently love the bacon scent, so it’s the next one we’re going to try! Playology also seems to have lots of customers loyal to its pebble chew, which has several nubs and ridges to keep a chew session exciting. Make sure to get the appropriate size for your dog to ensure safe chewing. 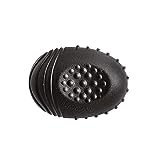 Eira loves cheese. So does my toddler! If he has a sense of smell anything like Eira’s (I’m sure he doesn’t), they’d be playing tug-of-war with this ball in two seconds flat. This ball also squeaks, which will boost its fun status in Eira’s mind because she adores squeaky things. What dog doesn’t?

It would also probably fit inside a Chuckit! ball launcher. It could even be an easier ball for your dog to find in tall grass because of the pungent smell. 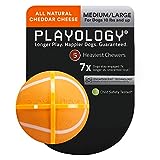 Have you ever heard of a rope tug toy that smelled like peanut butter? Neither have I! But Playology sells one, of course, and I think Eira would love it. She’s a huge fan of Kong’s peanut butter paste—and playing tug-of-war. This rope is said to last longer than your average rope tug, which is a huge plus if you have a chewer on your hands. 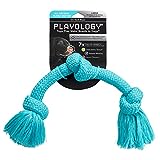 Now that Eira has a chicken-scented bone, I want to get her a beef-scented one. Because beef is a red meat, it would seem to attract dogs more than chicken would. I’ll probably wait until her chicken bone is worn down more, though. If that ever happens. Because as I said, she’s been intermittently chewing on her chicken-scented bone and it’s holding up extremely well.

Maybe she’ll get a beef-scented bone at Christmastime. 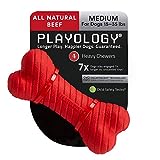 The jury’s out on whether the smell of these toys means anything to Eira. There are signs that it could, and signs that it makes no difference. Still, the quality of the toys is worth seeing for yourself—and it’s possible that your dog will adore the different scents even more than Eira does. 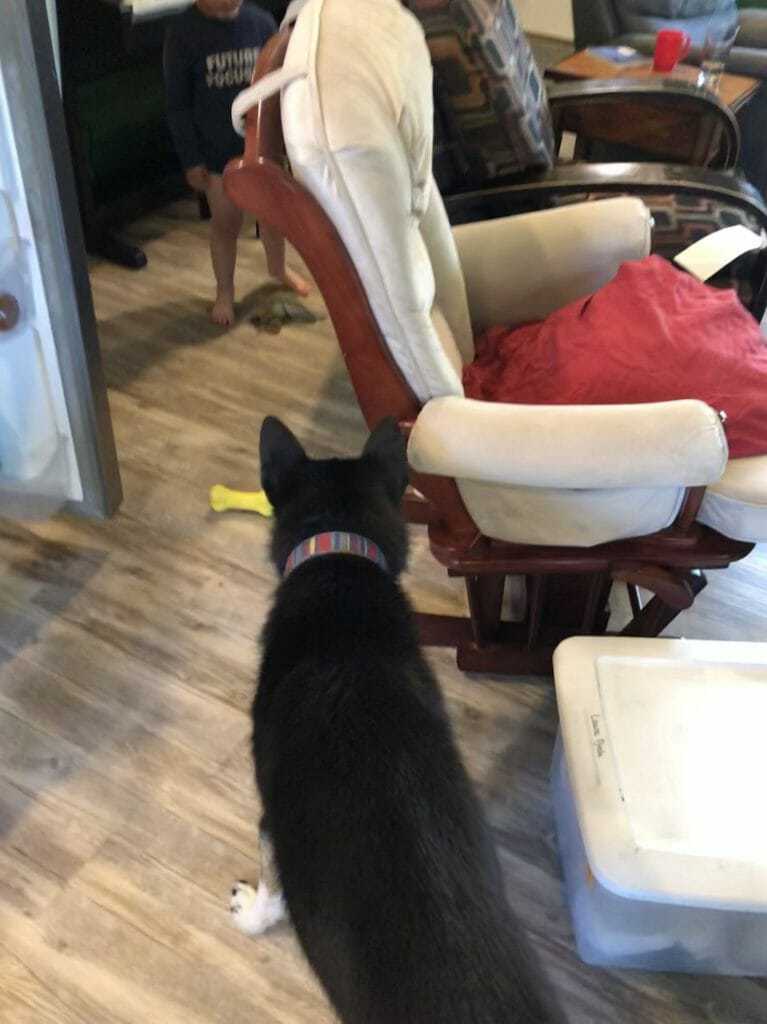 Have you ever tried giving your dog a Playology bone? If so, what did she think? Let us know in the comments! 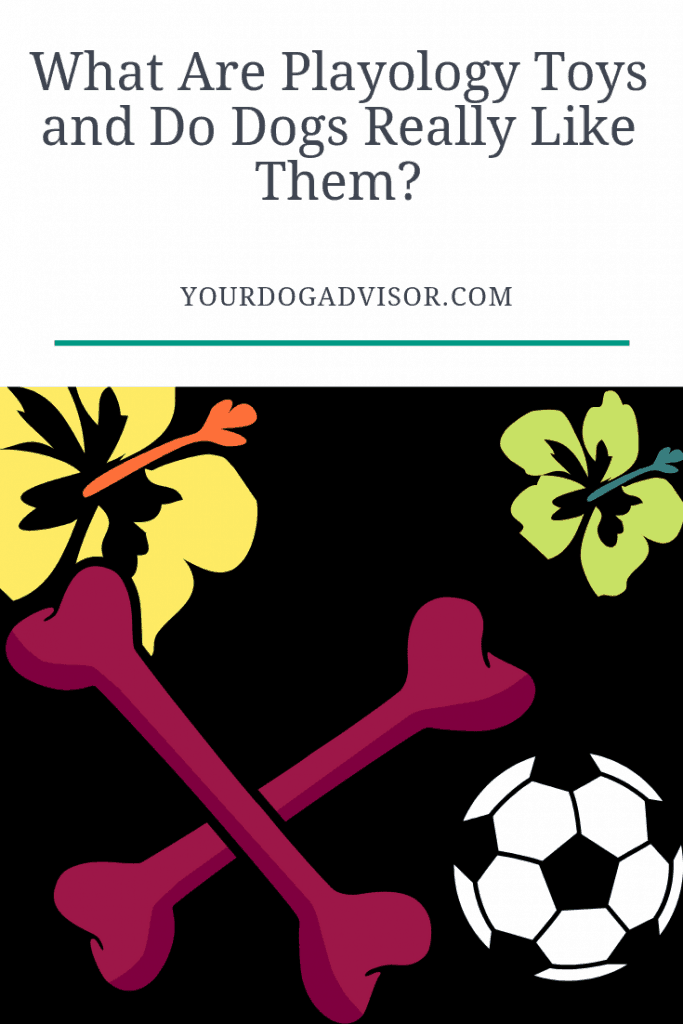