If you have a big dog or just a dog who loves to chew things to bits, you have probably spent a fair amount of time in your life looking for indestructible toys. Not only do the toys have to be indestructible, but they also have to be fun. The more elements, the better. An indestructible toy that a dog can chew, chase, and fetch? That’s the best. I’ve had German shepherds and German shepherd mixes my whole dog-loving life, and every single one of my dogs has loved to destroy things. Clancy used to chew tennis balls until they were reduced to slabs of depleted rubber. She chewed with her whole jaw, all her life, so that by the time she passed away her teeth were dulled from chewing. Bella, her daughter, was similar. Once, when we were at the vet to check on Bella’s hot spots on her tail, I gave her a ball to play with while we waited.

She slid under my chair, taking her ball with her. Over the next half hour, she methodically peeled back each strip of bright yellow fabric covering the tennis ball and then split those strips in two. By the time the vet finally came out to get her, Bella had a tidy pile of shredded tennis ball in front of her and a skinned rubber carcass in her mouth. I’m glad she was able to relieve her stress that way, but I wished the tennis ball would’ve lasted through the actual veterinary procedure and examination.

There is one brand of toy that, by its name alone, suggests that it can handle dogs that love to chew, strip, and destroy toys. It’s the Tuffy brand, and I’d never tried it before a couple of weeks ago when I got Eira her first TUFFY toy. She loved it almost immediately. Even though dogs don’t see color like we do, I’d wager she was drawn to the red color, and the fact that she could chew and chew and tug at the binding and nothing would happen. As in, it didn’t fall apart. 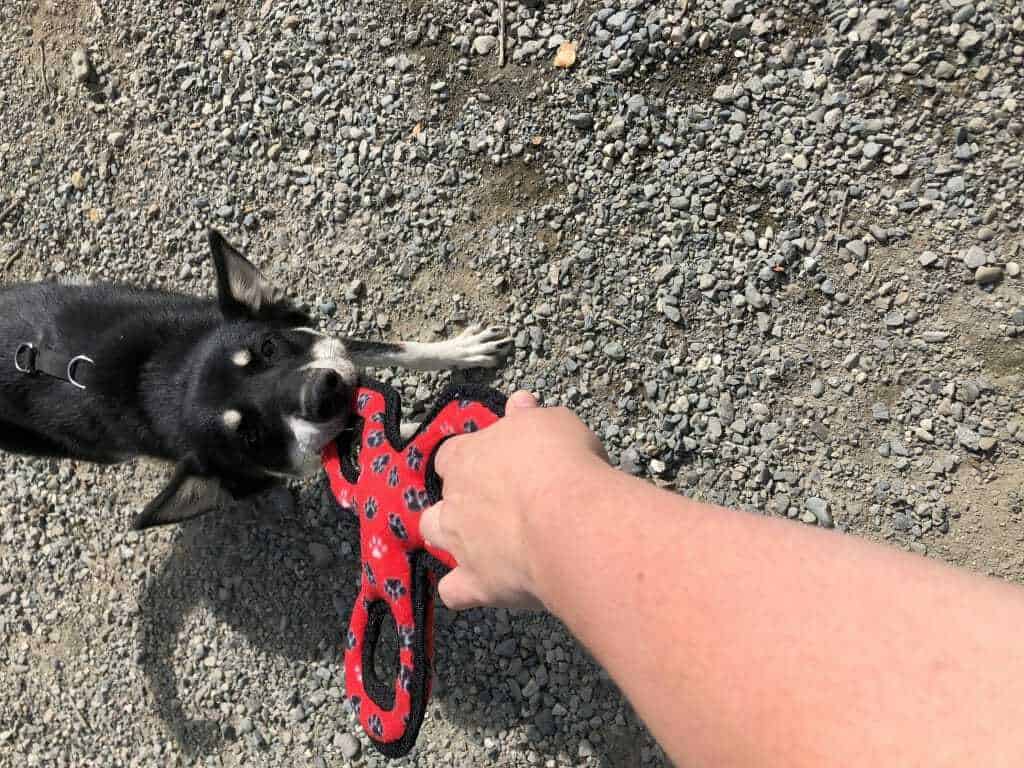 Eira and I play tug-of-war with her favorite TUFFY brand toy.

Eira is getting spayed in a few weeks and you’d better believe she’ll be bringing her favorite red TUFFY along with her to ease her nerves and give her a piece of home while she’s recovering at the animal hospital.

If you’ve never heard of TUFFY toys, it’s high time you met the best ones.

(No, really. Trust me. These toys are the best!)

This adorable, fluffy white sheep is hiding a secret: it’s no fluffball that’ll fall apart at first nip. No, this sheep is a TUFFY sheep. A durable barnyard animal. Your dog can tug, chew, stomp, fetch, and slobber all over this thing and the only thing that’ll happen is that its white wool will turn gray. But that’s okay, because what matters is that your dog is having fun with a toy that won’t fall apart. Made with up to four layers of fabric and extremely durable stitching, the company says this sheep isn’t necessarily for chewing. Try telling that to your dog’s jaw, though. Because of my experience with other TUFFY toys, I’ll bet this sheep holds up just fine to chewing, but if you want to play it safe, keep an eye on the sheep when your dog is playing.

This Tuffy sheep is made of four layers: one of durable fleece, one of luggage material (that’s right, the stuff that suitcases are made of), one layer of plastic in the middle, and filled with just enough fuzz to make the chewing bouncy and fun. (But not so much that, in the event your dog labors and toils for years and years and finally does rip this sheep apart, your house will be covered in fuzz.)

Another plus to this sheep and other TUFFY brand toys? They’re machine-washable, which pretty much solves the gray wool problem. Even if the sheep’s wool gets stained, you can at least wash it and know it’s clean. You could also just toss this toy into the water to clean it off, because — that’s right — it floats. Could this TUFFY toy get more versatile? 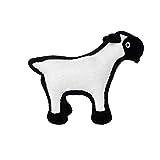 This toy is like a Nerf ball, but made of TUFFY’s soft, super-durable material. You can throw it into water (it floats!) or across a field, or hide it for a quick game of hide-and-go-seek. This ball is available in four fun colors and patterns: Red Paw, Camo Blue, Pink Leopard, and Yellow Bone. Choose whichever color fits with your decor, or whichever one attracts your dog’s eye the most. Or get them all and toss them for multiple dogs and let the fun begin! TUFFY rates its products on a scale of 1-10 of “tuffness,” on which this toy scores a 9. That’s pretty high. Our barnyard sheep friend gets an 8. To prove how tough the Ultimate Odd Ball is, know this: instead of one layer of luggage-grade material, it has two. Your dog would have to really work hard to rip this ball apart. I just don’t think it’s possible without many weeks of dedicated chewing, and even then, I feel like the ball would stay in one piece. It’s that tough. 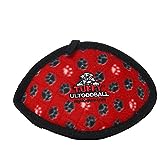 Ahh, the TUFFY 3-Way Tug. A source of Eira’s deepest joy and gladness, this tug is perfect for many things. Eira loves to fetch her tug, chew her tug, and tug her tug. Even my toddler loves hanging out with Eira’s Tuffy Tug. 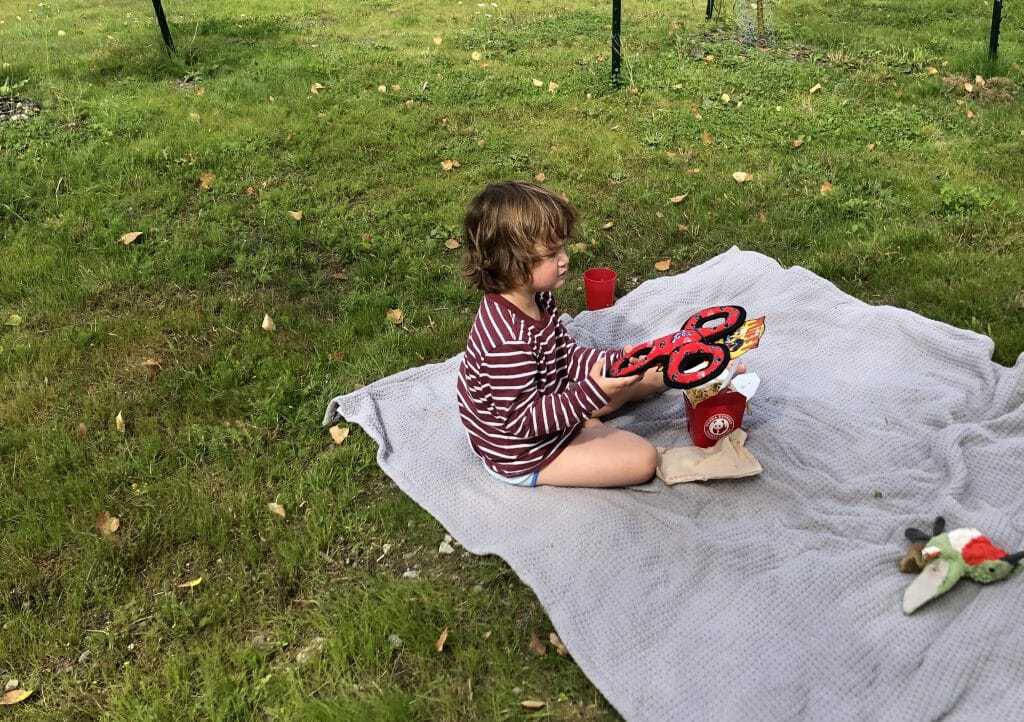 My toddler forsakes his own cherished hummingbird toy for Eira’s TUFFY tug.

When I first gave Eira her TUFFY tug, she caught right on to what she was supposed to do. Just watch the video below:

Isn’t that sweet? She got right to her work of chewing and hasn’t looked back since.

Because this toy has three spacious handles, two people and a dog can play tug-of-war with it. Or one person and two dogs. Or three dogs! Now that would be fun to see. Eira literally plays with this toy daily, and when I throw it for her, it flies surprisingly far. Because Eira’s TUFFY is red (although it’s available in four colors, like the Odd Ball), it’s easy to find our tall backyard grass.

I know she will eventually wear this toy out — maybe after a couple of years. And then I’ll have to get her a new one. It’s her ‘cozy’ toy, the one she goes to after she gets scolded for trying to jump up on the counter. Her comfort and joy. It’s a little pricier than most stuffed dog toys, but we’ve said this before: the TUFFY is no regular stuffed dog toy. 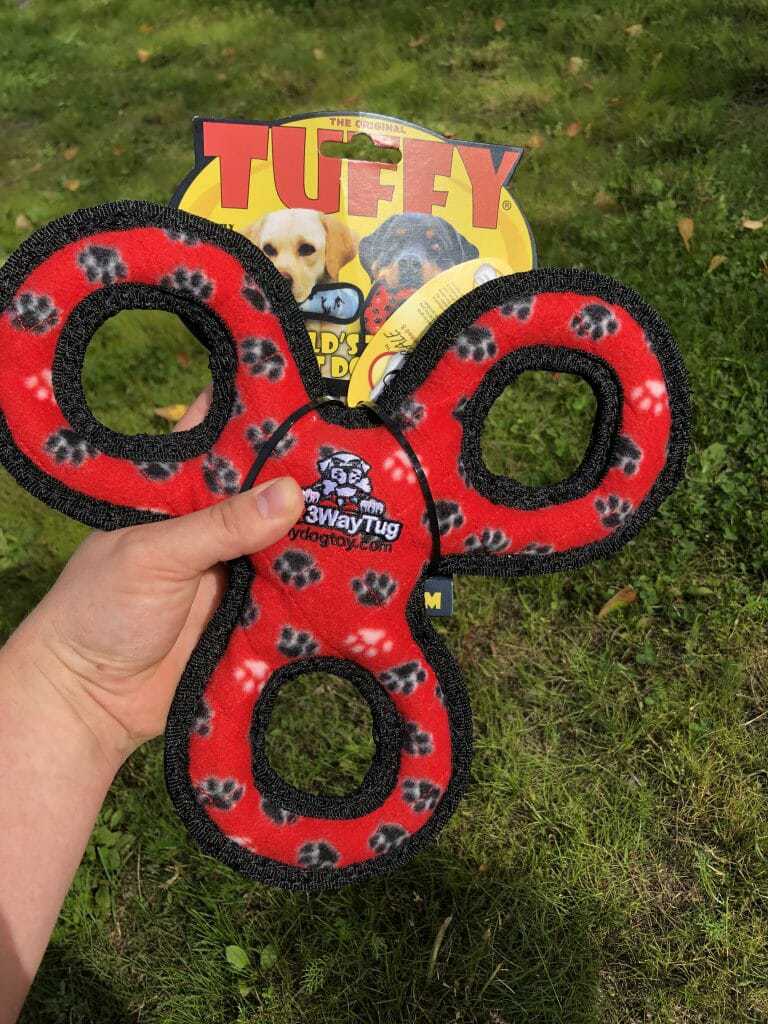 Just look at that thick edging and triple-stitching. This toy is made to last. 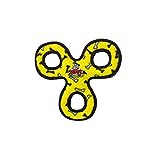 Because TUFFY is the coolest toy brand ever, it of course has a dinosaur line. You can buy a stuffed pteradactyl, moosasaurus, destructosaurus, stegosaurus, T-rex, or triceratops. One of these dinosaurs is definitely on Eira’s Christmas wishlist. Or maybe all of them. The neat thing about TUFFY’s dinosaur line is that the dinosaurs, unlike the barnyard sheep, feature limbs and wings and fun appendages like that. (More to chew and tug, am I right?) You can get them in the large or junior (just a little smaller) size, which means just about any dog can enjoy chewing, dragging, tugging, and drooling on their own TUFFY dinosaur.

The dinosaurs are only a 7 on TUFFY’s tuff-scale, though, so definitely keep an eye on your dog while she plays with her pterodactyl or triceratops. Oh, and to make these dinosaurs even more attractive to your dog, there are squeakers buried inside.

A squeaky, super-tuff dinosaur. What more could your pup want? 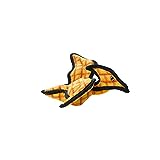 If you have the type of dog who sniffs out even the tiniest bit of stuffing and then stops at nothing to get to it so he can spread it all over the carpet, fear not. TUFFY has a toy for your dog: the durable dog ring, which has no stuffing whatsoever. Just those four durable layers of material and a fun shape that you can roll down the hallway or living room floor for your dog to chase. Not only that, this ring earns the highest durability rating on the TUFFY Tuff Scale: a big fat 10. How’s that for durable? 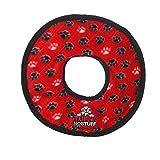 While every dog toy company out there makes a frisbee, including Kong and Nerf, TUFFY’s frisbee is special. Why? Because, first of all, it’s extra durable. A 9 on the TuffScale. AND, like all the other TUFFY toys, it’s soft and fluffy. This is probably my favorite thing about TUFFY’s toys: they’re extra soft and fluffy without sacrificing extreme durability. I think they’ve cornered the market on that particular quality, and I’m their devoted customer for as long as they continue to make strong, fluffy dog toys. (Eira, too.) This frisbee is made with TUFFY’s four signature color/pattern combos, and it’s edged in durable fabric with lots of stitching. Even though it’s a slightly stuffed fabric toy, this thing flies. Your dog will have the best time sprinting across your yard to fetch the TUFFY Ultimate Flyer Dog Toy. 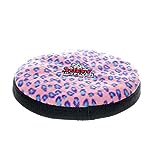 Looking for another no-stuff TUFFY toy for your dog? This soft tug-of-war bone has TUFFY’s highest TuffScale rating: that’s right, a perfect 10. It features two handles so you and your dog can tug back and forth, back and forth, until one of you flings the other into the air (or hopefully lets go before then!). You won’t have to worry that this toy will break in two, because it’s a TUFFY. And after your lively game of Tug, your dog can trot off to the corner and have a good, relaxing chew. 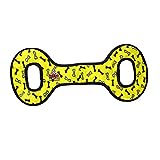 Have you ever tried a TUFFY toy for your dog? I can’t believe I’d never heard of TUFFY before this year. I definitely would have grabbed ten TUFFY toys for my German shepherds to play with. They would have had a blast. 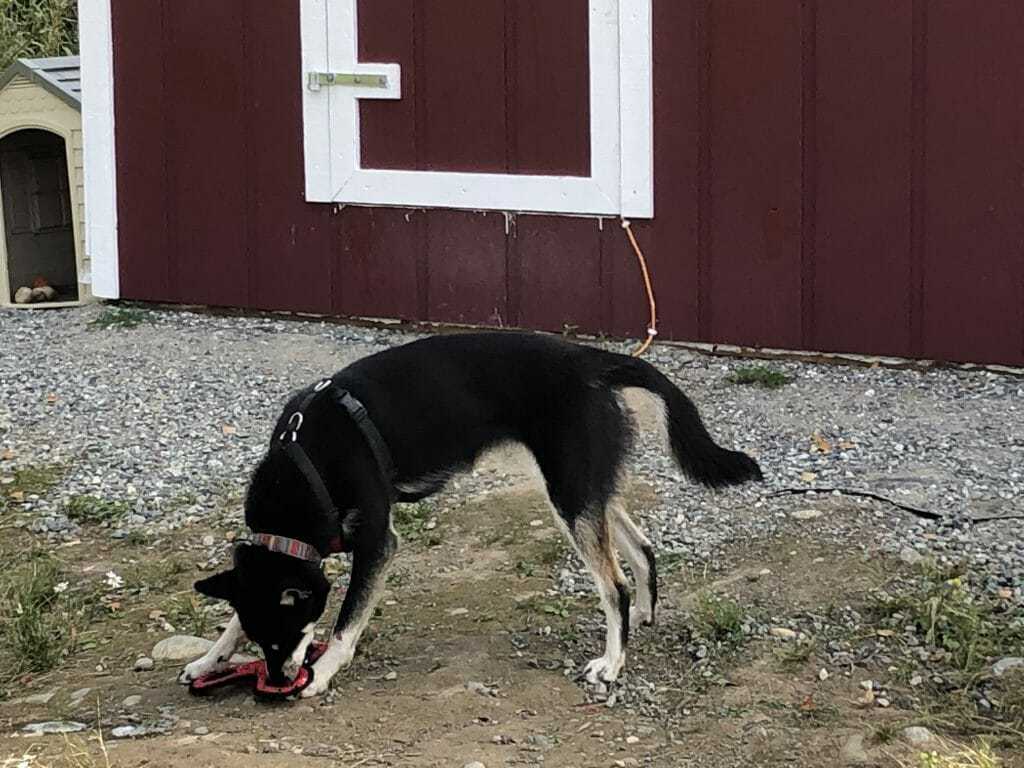 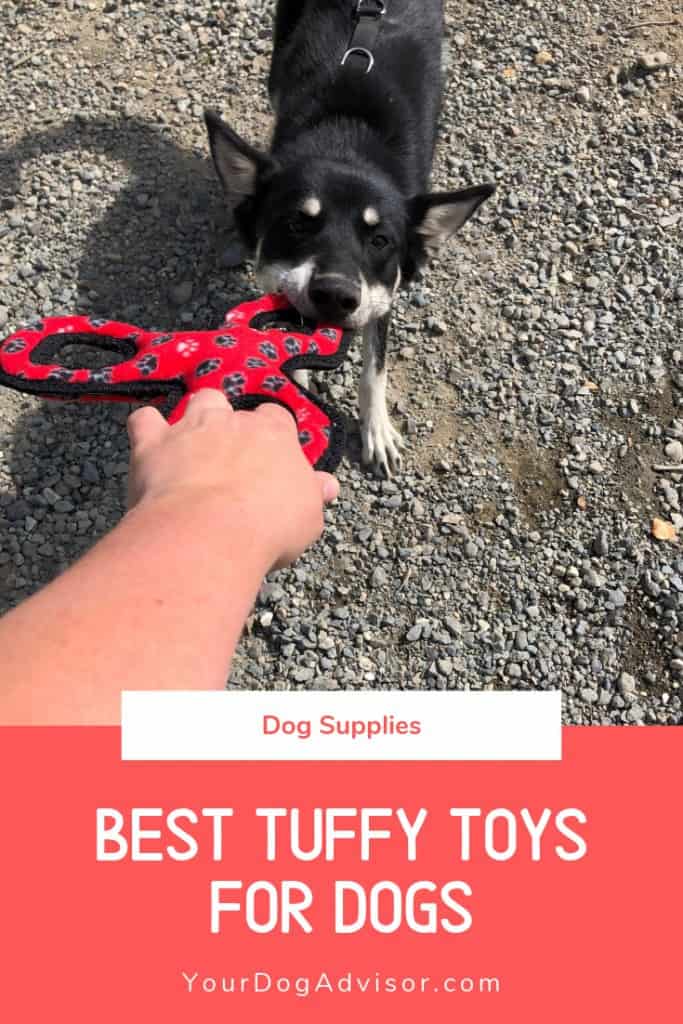