There’s nothing better than helping your dog satisfy her instinct to chew, chew, chew. Especially if you give her something safe, tasty, and fun — and something that’s not a treasure your dog dug out of your closet, like a shoe. I’m a firm believer in keeping several chew toys in Eira’s toy box so that she can pick and choose what she feels like chewing on any given day.

Since we first tried the great Benebone several months ago, Eira has gone through two more — I made sure to buy her new ones once I noticed large chunks coming off her old ones, just as Benebone advises dog parents to do. But this time around I decided to get Eira something a little more durable. She’s a pretty aggressive chewer and we’ll be out of town for seventeen days at Christmastime, meaning she’ll be at a pet boarding facility that entire time. I don’t want a Benebone I send with her to get all chunky and worn out (and therefore become a choking hazard) so I went on a quest to find the best dog toys for aggressive chewers like Eira.

Here are the best options I found.

My son now goes to preschool part of the day, so for two and a half hours every day, Eira gets me all to herself. She’s a huge fan of this Eira-mom time. Such a fan of it, in fact, that she would be highly satisfied if I pet her the entire two hours. Since I have plenty of work to do after I’m done with a nice Eira-mom cuddle sesh, I knew I had to find a bone that she’d chew and not destroy — and that I could put treats into. 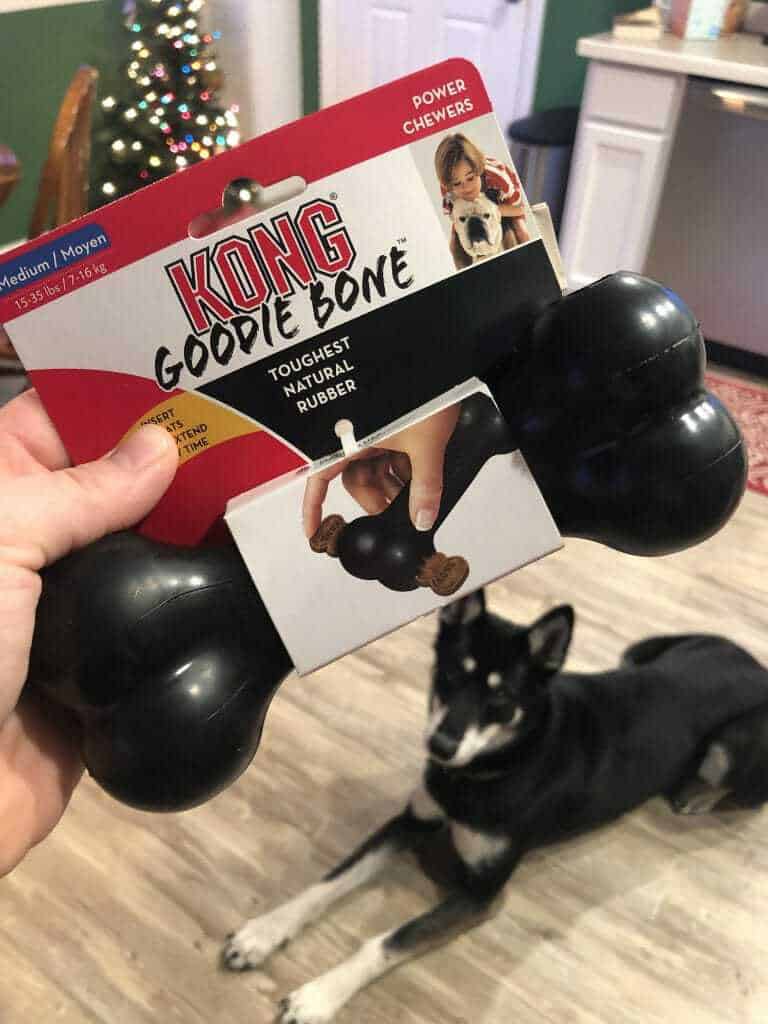 Eira eagerly waits for me to open her Kong Power Chew Goodie Bone.

Made of Kong’s toughest, most durable natural rubber, these things don’t even dent with heavy chewing. It’s amazing. But my favorite part is that you can stick treats into both sides of the bone — or if your dog likes string cheese more than dog treats, like mine does, you can slice a piece of string cheese in half and shove it into both ends of the Goodie Bone. 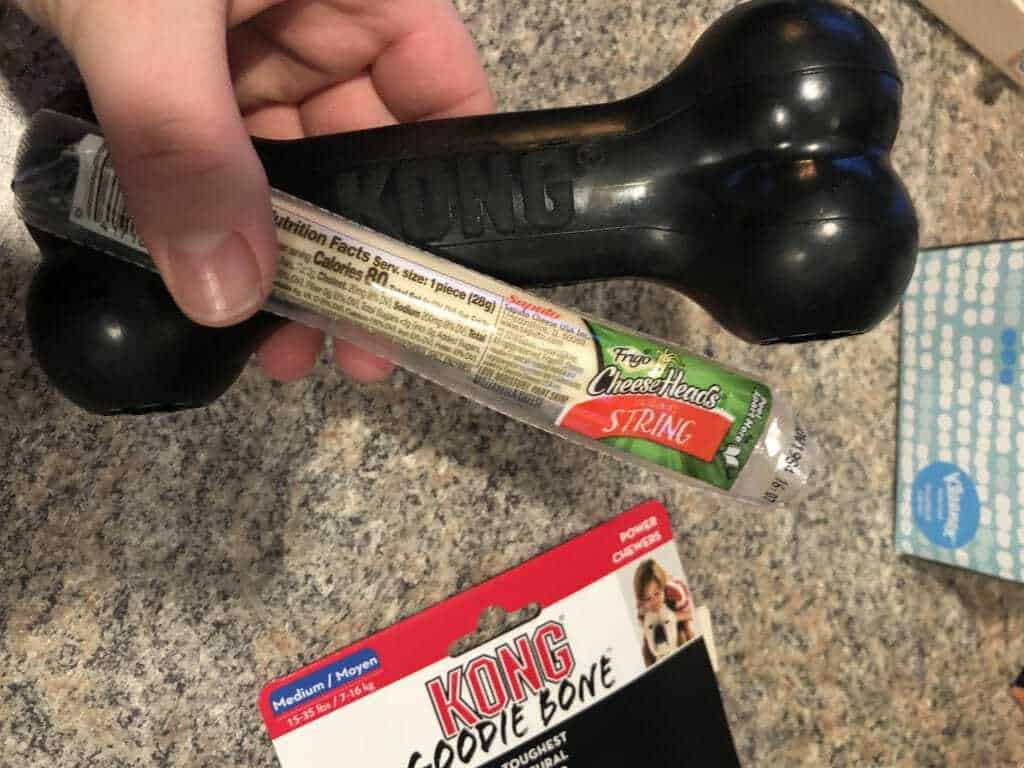 Eira’s about to get some string cheese — but she’ll have to work for it!

I say ‘shove’ because the string cheese is a tight squeeze. But that’s a good thing. It takes Eira about half an hour to get all the cheese out of the two holes. 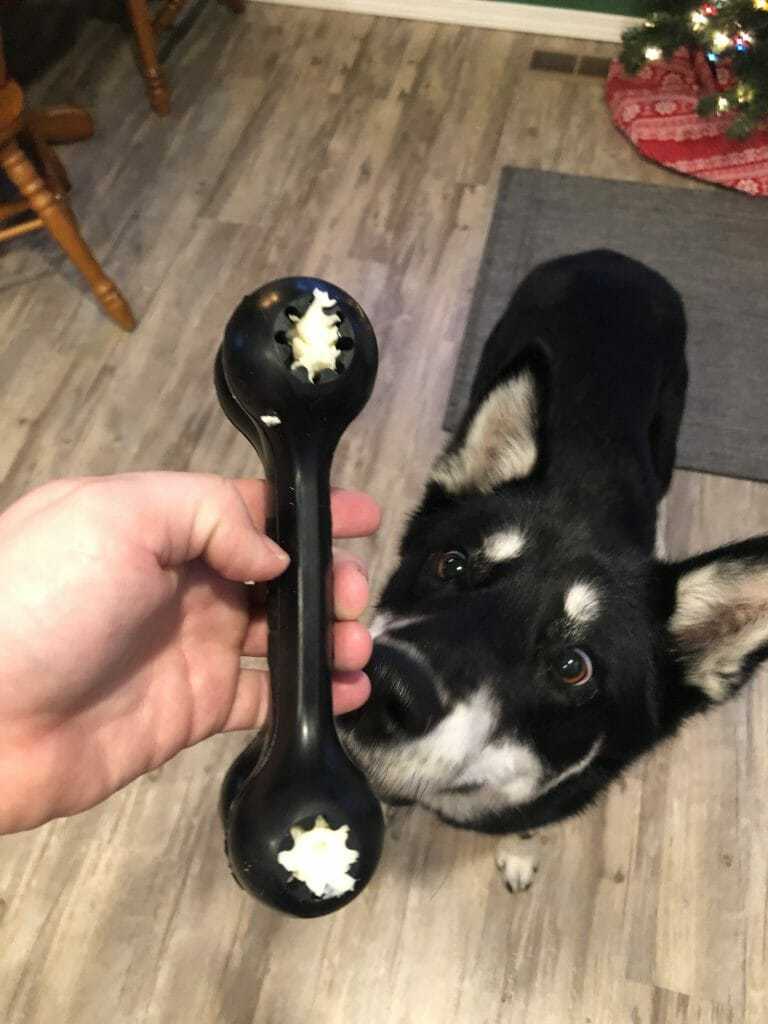 Look at those wild, thrilled eyes! Eira can’t wait to start working away at her Goodie Bone to get the yummy cheese inside.

She has to chew, lick, and nose the holes to get the cheese free. So she not only gets some therapeutic chewing in, but she also works her brain a bit and is rewarded with soft bits of cheese throughout the entire process. And unlike a regular Kong, where sometimes things get stuck forever (and then get kinda stinky and gross) in that one big hole, stuff doesn’t stay in the Goodie Bone’s two smaller holes for long. 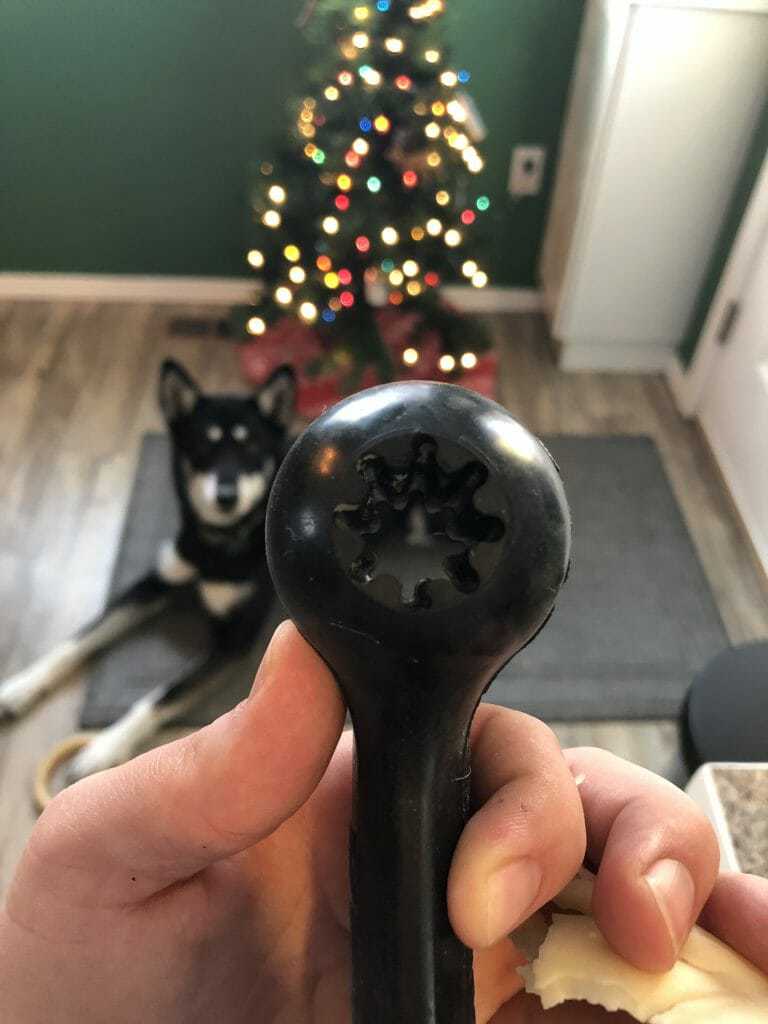 I love how the holes are small enough that it’s hard for the dog to get the food out, but not so hard that they eventually give up and stuff rots in there.

Eira’s been enjoying treats in her Goodie Bone all week, chewing the heck out of those end sections, and she still hasn’t made any dents in the rubber. That’s pretty amazing, if you ask me! This is definitely a toy that will accompany Eira during her Christmas stay at the kennel. 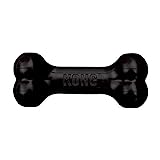 My German shepherds, Clancy and Bella, could not get enough of ball toys. They chewed tennis balls to a pulp and Kong balls almost to shreds between the two of them. This would have been the perfect indestructible ball for them to chase, bury, and chew. It’s the size of a large tennis ball or baseball, so perfect for chewing but not so small it presents a choking hazard, and it’s made from extra durable rubber. The brand, Monster K9 Dog Toys, is so confident in their product that they offer a lifetime guarantee on the ball.

If your dog happens to chew it despite its extreme toughness, they’ll give you your money back or another ball, no questions asked. That’s good faith in a product right there. 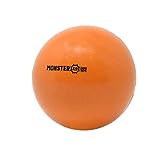 Does your dog get easily bored with all the regular-looking dog toys on the market? Try this exciting, spiky, bright yellow pineapple toy. Scented and flavored like a tasty pineapple and textured with all those pinappley ridges, this toy keeps your pup entertained for hours — and it does not fall apart. You can even put kibble or treats inside and see if your dog can figure out how to release the goodies from the pineapple. Put some peanut butter paste in there too and watch your dog endlessly lick at his pineapple toy.

The best thing about this toy — in addition to its durability — is its unusual and exciting shape. Find it below! 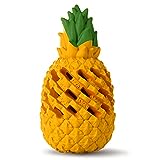 After walking past this enticing ring several times at the store, I finally decided to buy one for Eira. Aside from her Benebones, it’d been a while since she’d had exciting new toys, so I brought home the Nylabone Dura Chew Power Chew Ring.

Like all Nylabones, it’s got an enticing flavor throughout the bone (like Eira would ever chew it down to the middle — it’s way too strong) and that flavor keeps dogs coming back for more gnawing sessions. 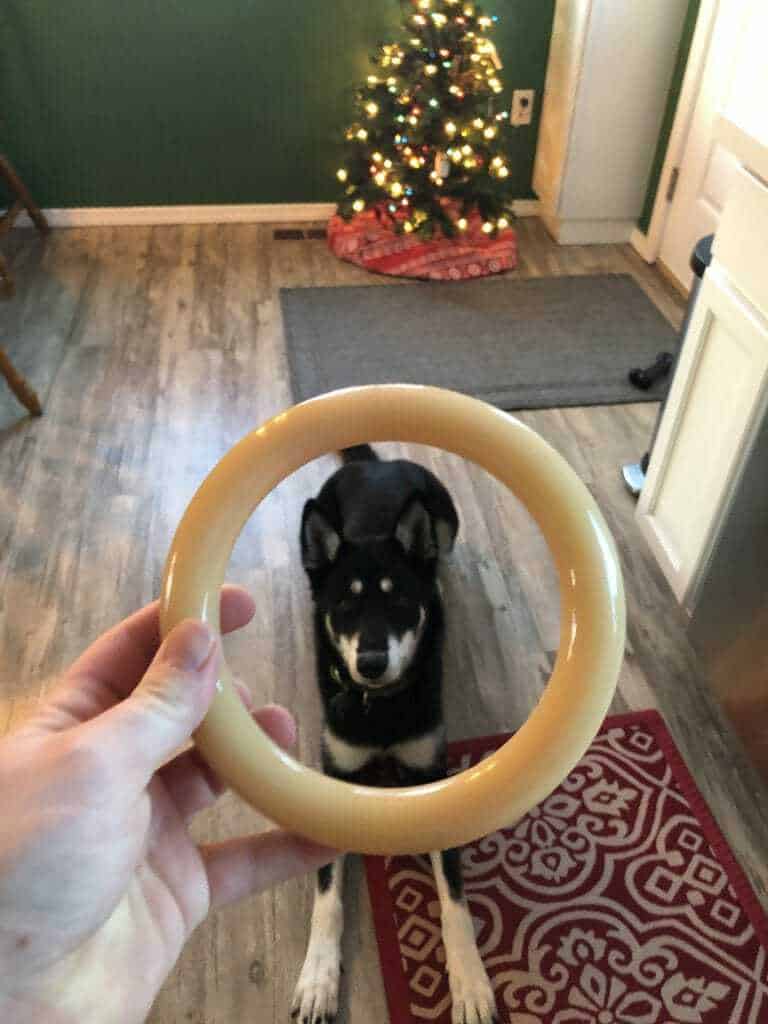 Eira and her Nylabone Power Chew Ring. She loves it, and I love how cute she looks when framed inside of it like this.

While this ring is extra durable, it’s not so hard that it hurts Eira’s teeth. It isn’t made of rubber like the Kong Goodie Bone, but of hard nylon. As Eira has chewed it, little ridges come off the ring, as they do in a Benebone. But I’ve noticed they come up more slowly than they do in the Benebone, and since they’re tiny (rice-grain sized) I’m not worried. Once they get big, it’ll be time to toss the toy. But I have a feeling that won’t be for a while. 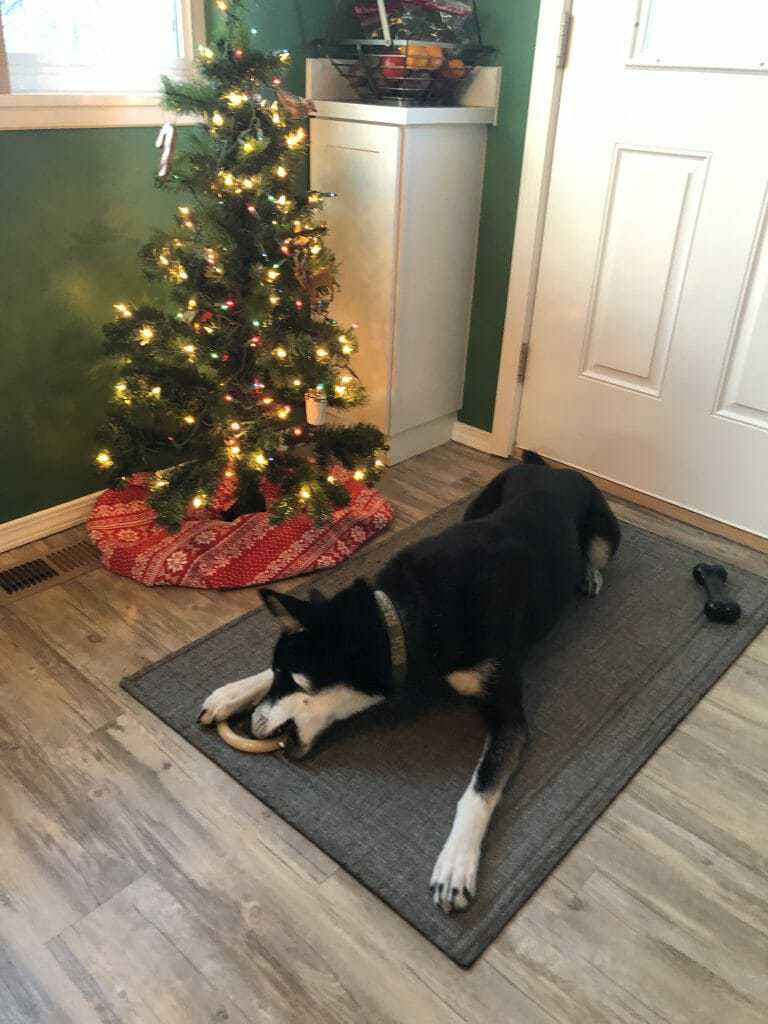 Not only can your pup endlessly chew this bone without ruining it, but she can also chase it. I love throwing it on our hard floor and watching Eira scramble after it. It often twirls around tantalizingly on the floor as she tries to grab it with paw or mouth. Once she does grab it, she settles down for a relaxing chew session. Unless my toddler heads over to her and grabs the toy for another throw! 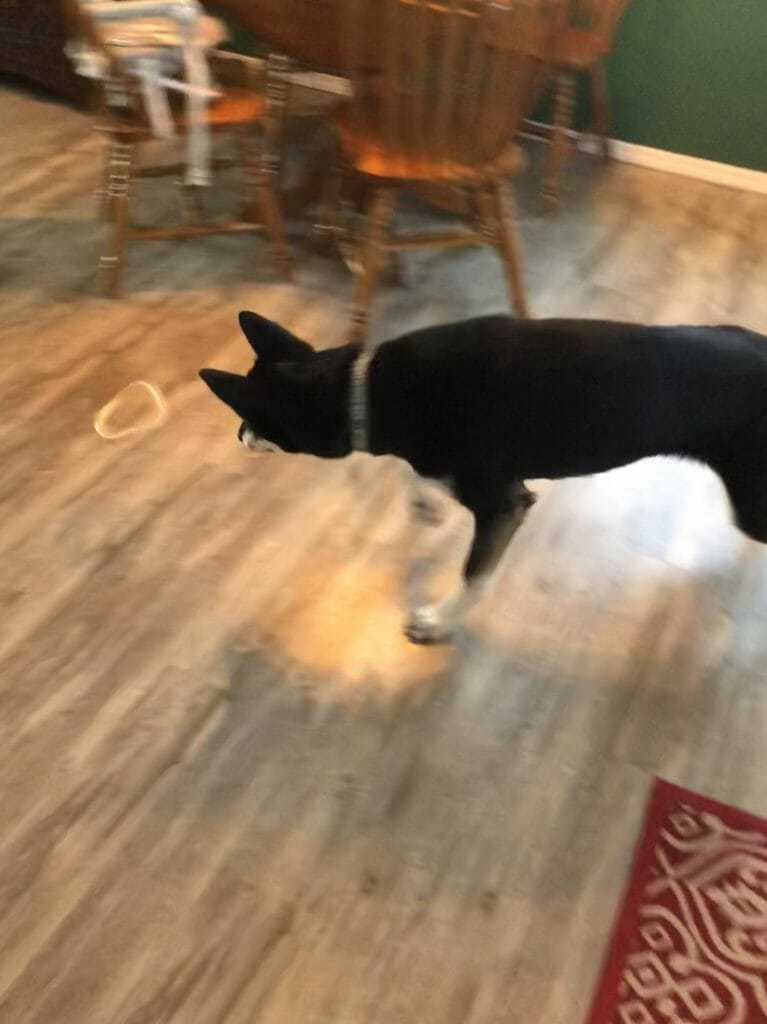 Can you spot the Nylabone? It looks rather distorted in the photo, but rest assured that it doesn’t twist into strange shapes in reality.

The Dura Chew is marketed for Extreme Chewers, so if Fido can’t stop ripping softer bones apart, it’s time to try a Nylabone ring. Make sure you always supervise your dog when he’s chewing any chew toy to make sure he doesn’t somehow chew off a big chunk and choke. There’s a small chance of that happening with any toy, ball, or stick, of course, and you don’t have to sit there and watch your dog chew for hours. But be in the same room as your pup just in case. Don’t leave him in a crate with a Nylabone for hours while you’re gone. A Kong Goodie Bone for Power Chewers would be better in that situation. 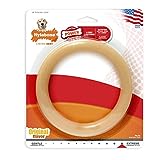 I love West Paw toys because they’re made and manufactured in my old hometown of Bozeman, Montana. They make some awesome puzzle toys, but because we’re talking about aggressive chewers right now, take a look at their Zogoflex made specifically for aggressive chewers. The Zogoflex has a triangle-like design with large, soft nubs for your dog to hold onto with mouth or paw. But don’t be fooled by the softness; this toy won’t fall apart. It’s made well, and it’s made to withstand even the most powerful jaw.

Plus, it’s got an opening on the bottom that you can stuff with treats. Your dog will twist and turn the toy with her paws to chew and look for the treat or paste you put inside.

And while larger dogs are most often associated with aggressive chewing, we all know that small dogs can tear things apart too. Good thing the Zogoflex for Aggressive Chewers comes in both small and large sizes! Oh, and if your dog somehow gets this one yucky, you can just toss it in the dishwasher to clean it.

In case you were doubting their awesomeness, WestPaw also makes an excellent, soft, light, dishwasher safe, power-chewer-safe ball for dogs. It’s got a wavy texture and a nice, spring bounce. AND it’ll float in the water. Tired of tossing soggy tennis balls into the lake, only to have your dog rip them to shreds when they come back out? Get a West Paw Nearly Indestructible Ball. I wish I’d known to get one of these for Clancy and Bella when they were puppies! Clancy especially. She was such an aggressive chewer of tennis balls that her teeth were worn down to nubs by the time she was nine years old.

A West Paw ball will save your dog’s teeth — and it won’t fall apart. You can get it in three exciting colors and in two sizes: small, which is two inches in diameter, and large, which is four. It’s a little pricier than your standard ball, but it’s well worth the money.

If your dog is an aggressive chewer who also suffers from halitosis, try this mint-flavored chew bone for aggressive chewers. Shaped like an exciting stick, the Barkbone contains mint and sodium copper chlorophyll to help keep your dog’s mouth healthy. Plus, it’s FDA compliant and made in the USA from USA-sourced ingredients. In addition to its awesome durability, the bone comes in three sizes: medium, large, and extra large, so that even the biggest pups can enjoy an aggressive-chewing session.

If you have an aggressive chewer, what’s your pup’s favorite, least destructible toy? Let us know in the comments! 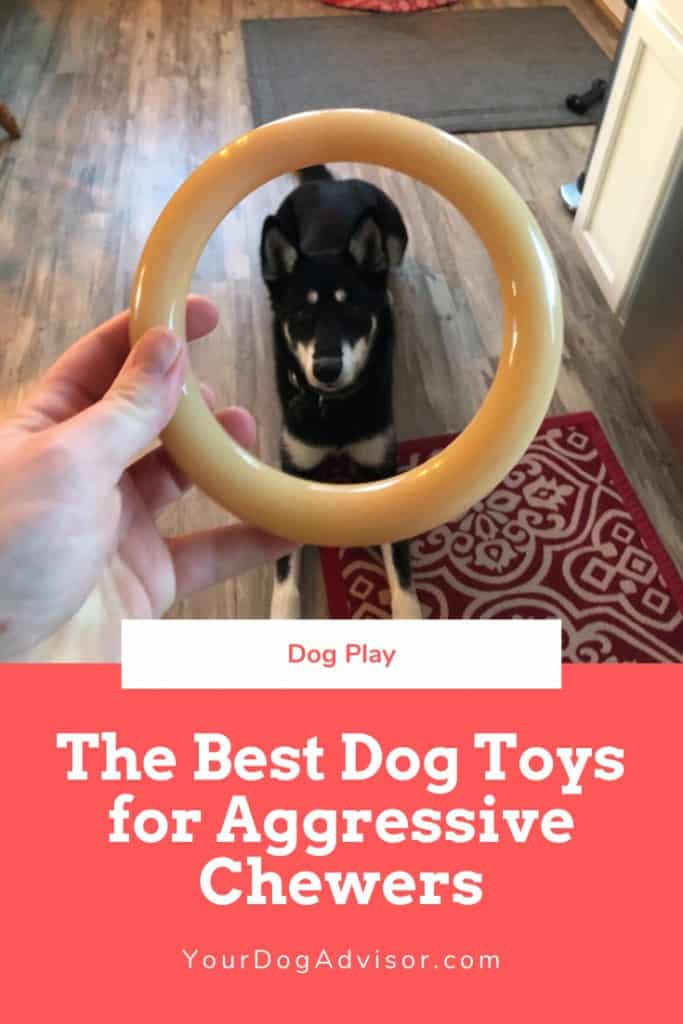