A few days ago, it was so cold here in Alaska that Eira’s eyelashes, eyebrows, and whiskers frosted over within minutes of being outside to go potty. But today, the temperatures have risen to almost 40 degrees, and it’s windy. Eira has been having bursts of extra face-itchiness and discomfort during windy spells in this cold Alaskan valley. In a seemingly unrelated vein, she’s also been getting very slobbery and carsick during even the shortest trips in the truck. She’ll often vomit once she’s out of the truck, poor thing.

The answer is a little complicated. Because yes, the main ingredient in classic Benadryl, Diphenhydramine, is safe for dogs in carefully measured doses. But other Benadryl products like liquid Benadryl, Benadryl for colds, and so on are not.

I decided to get Eira some children’s Benadryl because I want to give her a low, safe dosage. Here’s the safe Benadryl dosage: 1 mg per every pound of your dog’s weight. So a standard Benadryl Diphenhydramine pill has 25 mg — perfect for a medium dog. 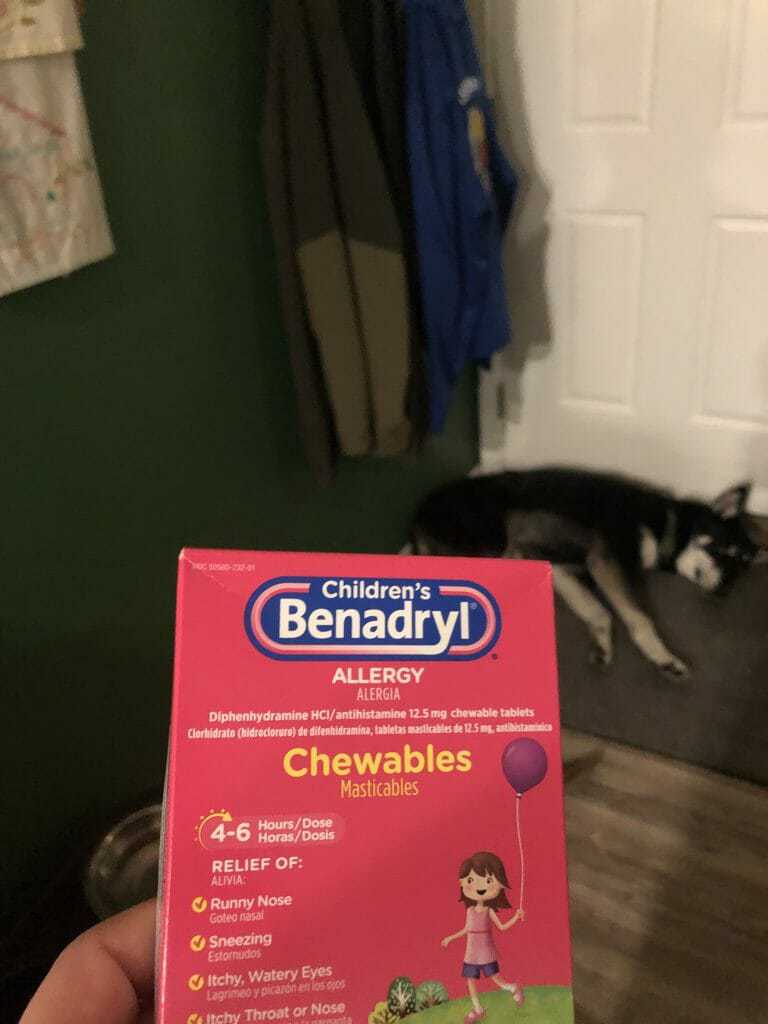 Benadryl chewables can be given to your dog to treat allergies and even carsickness.

So here’s what Benadryl can help treat in dogs.

First things first: if your dog has a severe allergic reaction to something in her environment and is having trouble breathing or is experiencing excessive vomiting or diarrhea, call your vet right away. But for mild allergies like sneezing, itchiness, and so on caused by pollen or whatever mysterious allergens float around on windy days, Benadryl can be a great option to calm the discomfort. Same for if your dog gets mild unexplained hives (it happens) or insect bites that are driving him nuts. 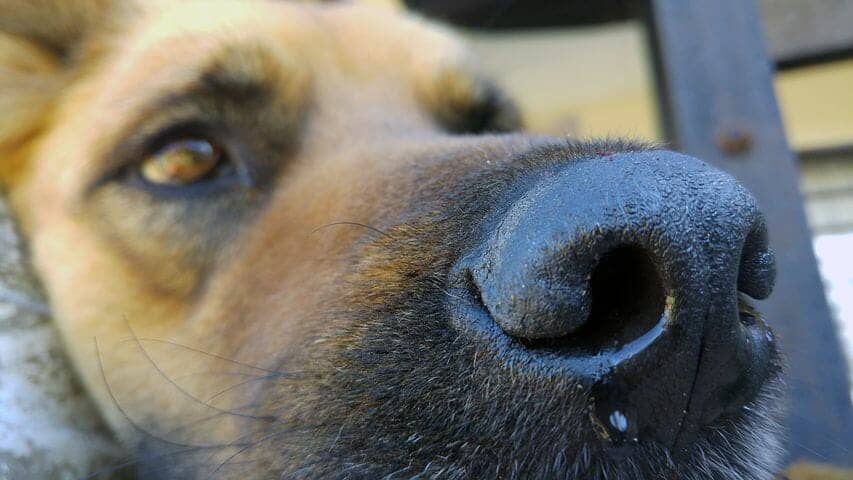 Is something in the air making your dog’s nose itch? Benadryl can be a good short-term solution for your dog’s discomfort.

But before you begin using Benadryl for your dog, check the ingredients list to make sure it does not contain any pseudoephedrine or acetaminophen, both of which can be harmful or fatal to dogs. Some Benadryl products include these medications. Always, always read the label. To be utterly safe, give your veterinarian a call before you give your dog any amount of Benadryl.

Benadryl works by blocking the receptors in the body that receive histamines, which is what the cells release when attacked by allergen triggers. That doesn’t mean the histamines don’t get released, but simply that the body does not recognize that they’re there and therefore does not provide the same reaction against them. The reaction is what causes the sneezing, drippy nose, and itchiness.

Strangely enough, Benadryl can help dogs who suffer from motion sickness, like Eira. Motion sickness isn’t just vomiting. If your dog is drooling, sitting very still, whining, or continuously yawning while in the car, they could be experiencing motion sickness — which happens when the fluids in their inner ear seem to tell the brain the dog is not moving but the dog’s eyes can see that it is indeed moving, and quickly.

The mix of information can cause a lot of discomfort, and Benadryl helps by blocking receptors that cause your dog to vomit or be sick. Benadryl also has a calming effect on many dogs and can ease anxiety about travel.

When NOT To Give Your Dog Benadryl

It’s always best to give your vet a call before you use Benadryl to make sure that your dog is 100% okay to use it. In general, dogs should not take Benadryl if they:

ALWAYS remember the 1mg per pound rule, or even better, ask your vet exactly how much to give your dog. An overdose on Benadryl could be fatal. Administer Benadryl to your dog as directed by a vet, or around every 8-10 hours. Avoid liquid Benadryl because it has alcohol in it, and time-release capsules because your dog metabolizes those differently than regular pills or chews.

How Did Eira Do?

After consulting the vet, I decided to give Eira a child-sized dose of Benadryl before a recent car trip — just 12.5 mg. She weighs about 60 pounds, so I could technically have given her more. 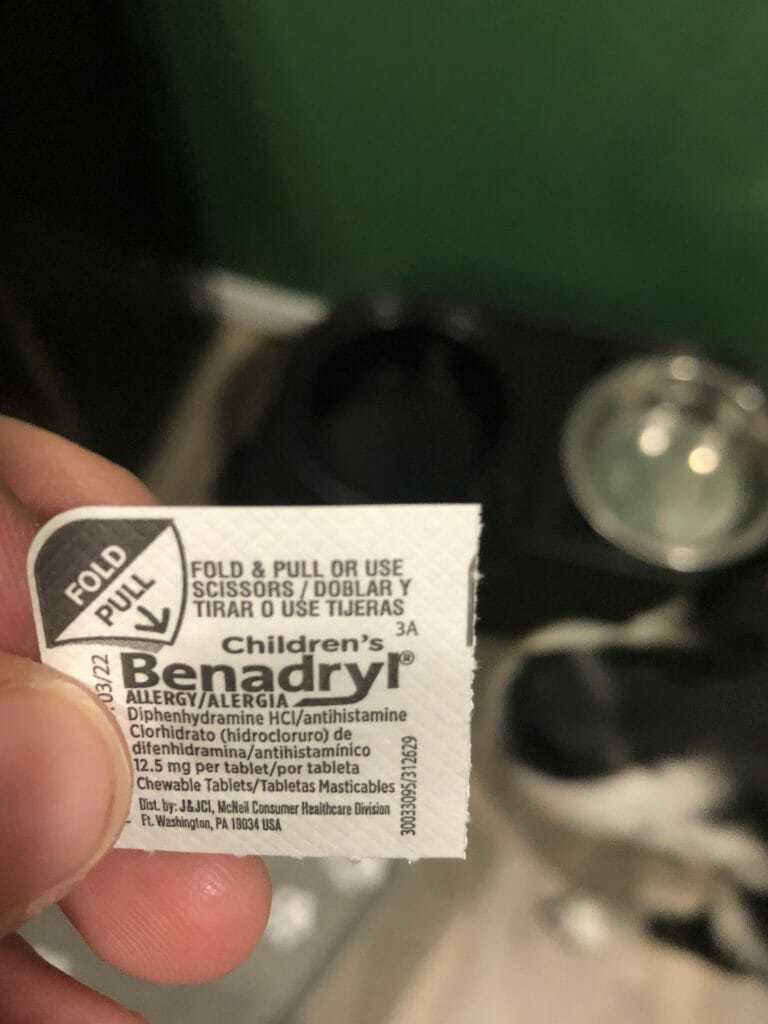 Getting ready to put one Children’s Benadryl tablet in Eira’s food.

I decided the best way to get Eira to consume the pill would be to add it to a can of wet dog food, so that’s what I did. I buried the pill a little so that she wouldn’t see it. 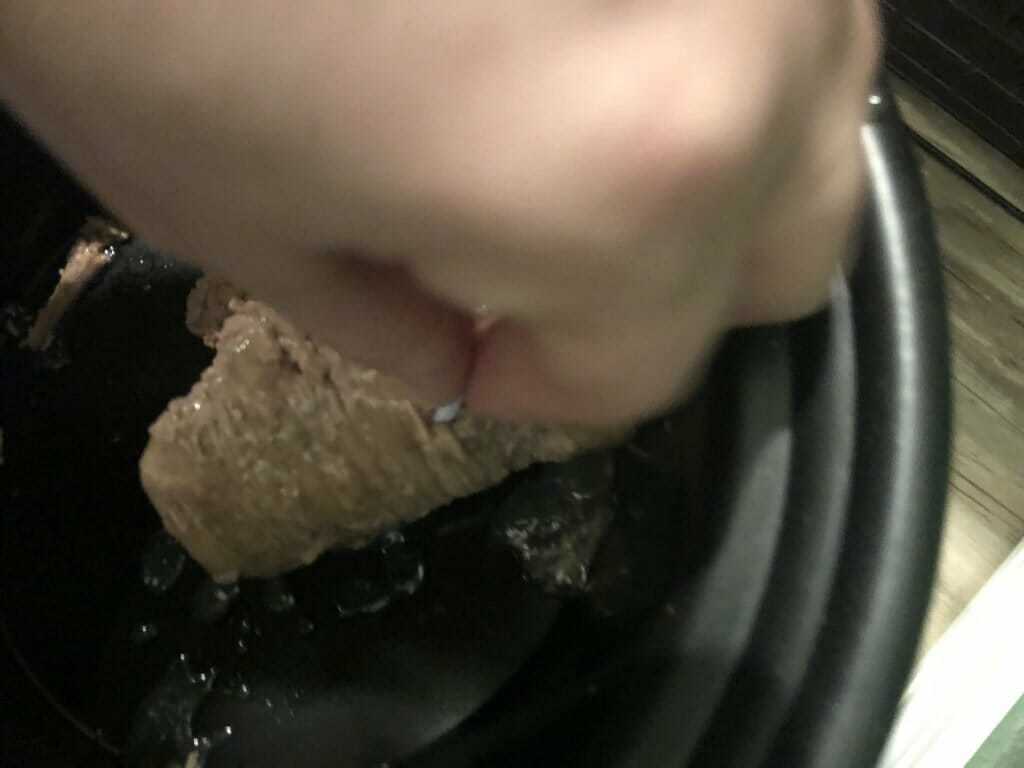 A quick action shot of me burying the Benadryl chewable tablet in Eira’s wet dog food.

She chowed down on the dog food and the Benadryl, and I then waited half an hour before loading her into the crate in the back of my truck. Usually when I arrive somewhere, I open the crate door to find Eira slobbering heavily. One of the remedies you can try before giving your dog Benadryl is opening a window for some fresh air if your dog is inside. But since Eira rides outside in the crate, fresh air clearly doesn’t help her.

So Benadryl it is.

I was nervous to open the door and see her poor slobbery mouth when we got to the pet store, but she was actually curled up in the corner of her crate, looking rather sleepy. No drool! No vomit! She got out of the crate to walk through the pet store and I will say it was a little hard to get her up and out of there. She was feeling drowsy.

But her head cleared up a bit while we got a few things at the store, and then we got back in the car and she promptly laid back down.

For the rest of the day, Eira did a lot of sleeping. Remember that this was just 12.5 milligrams of Benadryl. I always like to give a bit less than the recommended dose because if less works, then less is more.

By the next day, Eira was back to her springy, bouncy self, but without the itchiness and eye-watering I’d seen from the allergens borne on the wind. Today I gave her another tablet because it’s so windy again. When she’s uncomfortable from allergies, she tends to whine and scratch and want you to scratch her face for her…which is fun for a little bit but then gets kind of old! Benadryl helps take care of that and lets her be content to chew her toys.

In most cases and in the appropriate dose, yes. Diphenhydramine is safe for dogs for short-term use and usually under the direction of a vet. But if you keep an emergency kit around for your pup, adding Benadryl to it is a good idea. If you know your dog reacts fine to Benadryl and she isn’t taking any additional medications and isn’t pregnant or nursing, you’re probably fine to give her Benadryl the next time she needs it.

But always, always remember to give Benadryl with diphenhydramine as the only active ingredient.

You can find children’s Benadryl below (often a good choice for small dogs — you can cut it up to the appropriate size for really tiny dogs). 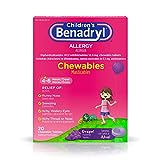 For larger dogs, try this Benadryl: 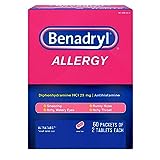 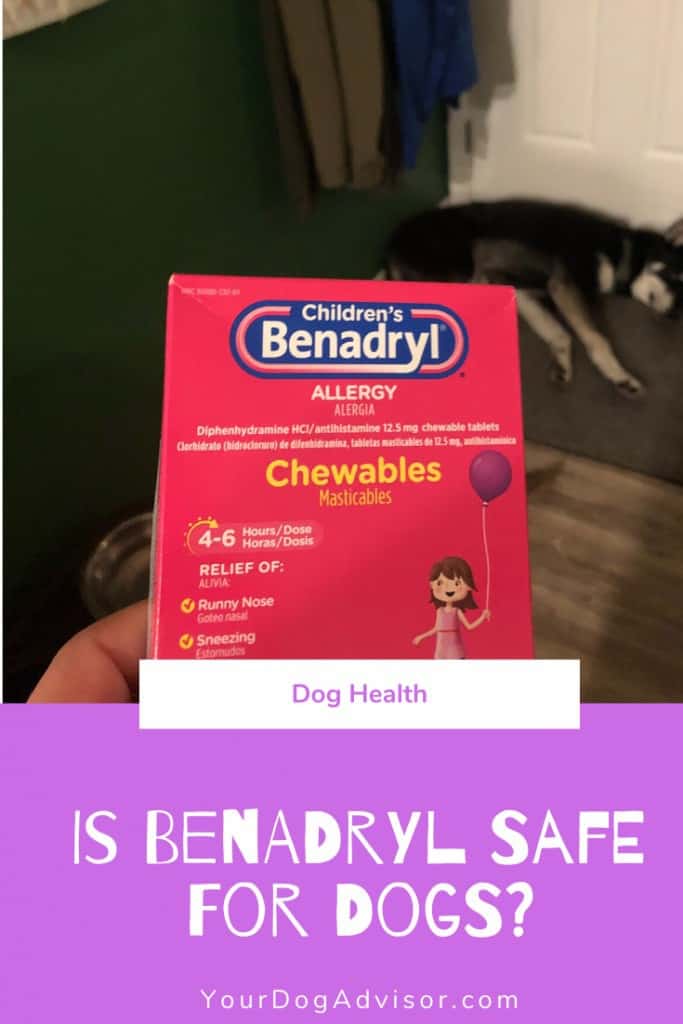