Normally, if you touch your dog’s stomach, it should be soft. It shouldn’t be too fat, but it shouldn’t be hard either. A hard stomach can be an indication of a serious medical condition and should be considered an immediate red flag.

While it could just be from overeating, a hard and swollen stomach could mean something serious, ranging from bloat or GDV to parasites. If you notice your pup’s belly is hard, it’s important to immediately note any other symptoms and call the vet quickly.

It’s especially important to call the vet immediately if you suspect they’re in any pain. Getting them to the vet ASAP can potentially mean the difference between life and death.

Gastric Dilation Volvulus (GDV), also known as bloat, is extremely dangerous. It can kill your pup within hours, so take it seriously and get them to the vet if there’s even a chance they have it.

GDV occurs when a dog’s stomach enlarges and rotates, trapping gases inside and blocking off the blood supply. It’s incredibly painful for them, so you’ll likely notice other symptoms on top of a hard, swollen stomach.

A dog suffering from GDV may have a rapid pulse and heartbeat, vomiting, excessive drooling, or breathing troubles. They may even collapse and be unable to move.

If you notice any of these symptoms along with a swollen belly, let your vet know right away and immediately rush your friend to the nearest emergency clinic. A veterinarian will attempt to decompress the stomach and stabilize the heart. Surgery will likely be required after. 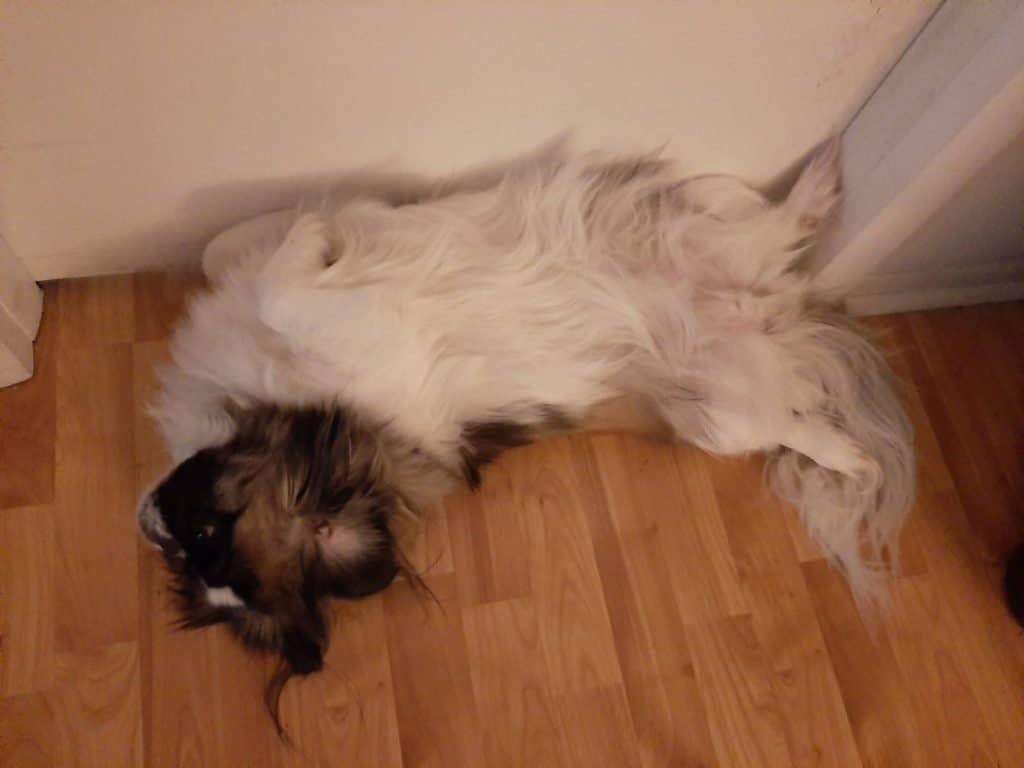 GDV or bloat can be a deadly condition and requires immediate medical attention.

While there’s no clear cause of GDV, there are a few lifestyle choices you can make to help prevent it.

Be especially careful with deep-chested breeds like Great Danes and St.Bernards as they are at a higher risk for bloat. Small dogs can also suffer from it, but it’s not as common. Watch your older dogs as seniors at the ages of 7-12 also have a higher risk of GDV.

Peritonitis is a serious infection in the lining of the abdominal cavity. It’s commonly caused by bacterial infections. It also occurs when the stomach or intestine ruptures. These ruptures can happen from splinters off a bone they ate, tumors, or ulcers.

There are many other potential causes of peritonitis. A liver abscess, pancreatitis, or a rupture of the gallbladder are just a few possible causes. Intestinal ulcers resulting from medications like steroids can also cause it.

Like GDV, peritonitis can cause a hard, swollen stomach and great suffering and even death for your pup. It’s important to get treatment immediately. 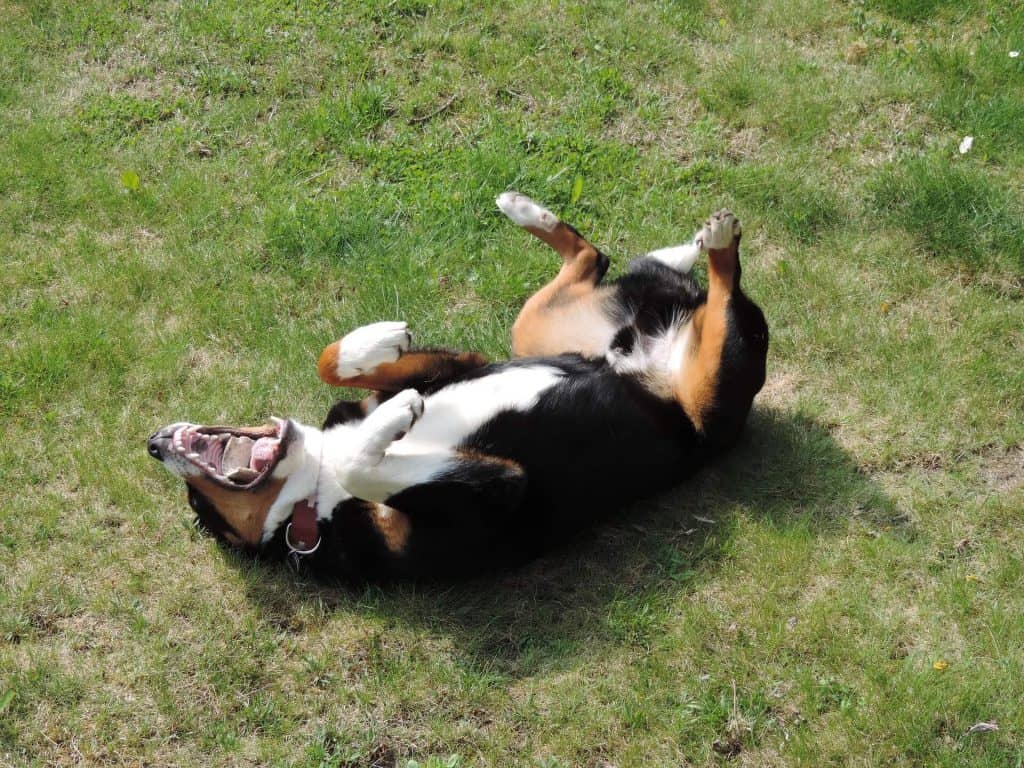 Peritonitis is a serious infection that can cause a dog to go into shock if not treated.

A dog suffering from peritonitis may be listless, vomiting, and unable to move. They may also suffer from diarrhea with black stools and rapid breathing. They can go into shock if not treated.

A veterinarian will likely need to run tests to find the underlying problem causing peritonitic. They will then likely need to perform surgery to correct the problem.

Ascites occurs when the abdomen fills with fluids, which causes swelling in the belly. It can be caused by several different issues like kidney problems, liver diseases, or intestinal problems.

Because it can be an indicator of other serious problems, it’s best to get your pup to the vet. A veterinarian will have to diagnose what problem is causing ascites before it can be treated. Each cause has a different treatment.

A dog suffering from a hard, swollen belly may be suffering from Cushing’s Syndrome. This disease is caused by the overproduction of a hormone called cortisol.

Cortisol is produced by the adrenal glands and helps reduce inflammation, turns food into energy, and helps regulate blood pressure and blood sugar. While it’s a necessary hormone, too much of it can throw off your pup’s systems, causing Cushing’s Syndrome. 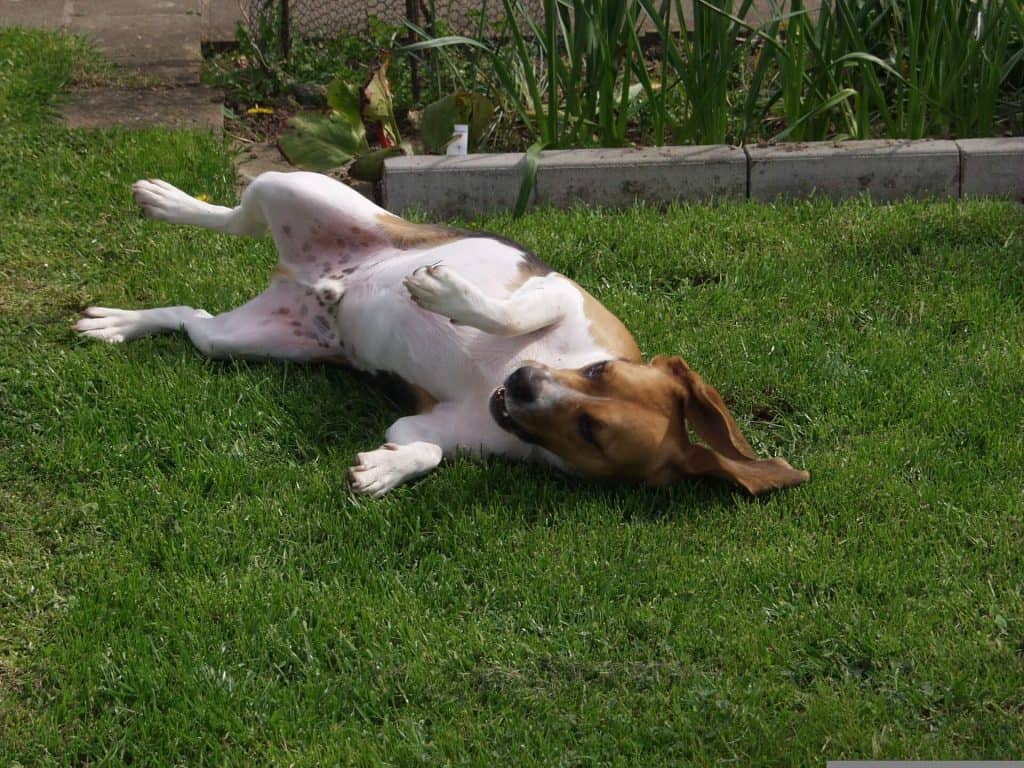 Cushing’s Syndrome is caused by the overproduction of cortisol or a tumor on the adrenal glands.

Cushing’s Syndrome can also be caused by a tumor on one of the adrenal glands that produce cortisol.

If your pup’s swollen belly is accompanied by eating, drinking, and urinating more frequently, it may be Cushing’s Syndrome. They can also suffer from hair loss and excessive panting. Older dogs are more at risk.

A veterinarian can give medications to treat both forms of Cushing’s Syndrome or perform surgery to remove the problem.

If your pup recently suffered a traumatic injury, be on the lookout for a swollen, hard belly. A hard stomach could be an indicator of internal bleeding.

Be on the lookout for pale gums and a fast heart rate. Your pup may also seem weak and lethargic. They may even collapse, which is a major red flag that they’re in trouble.

If you believe your pup is bleeding internally, get them to the vet as it can be a serious issue.

Parasites can be a dangerous cause of stomach swelling. Puppies are especially susceptible. 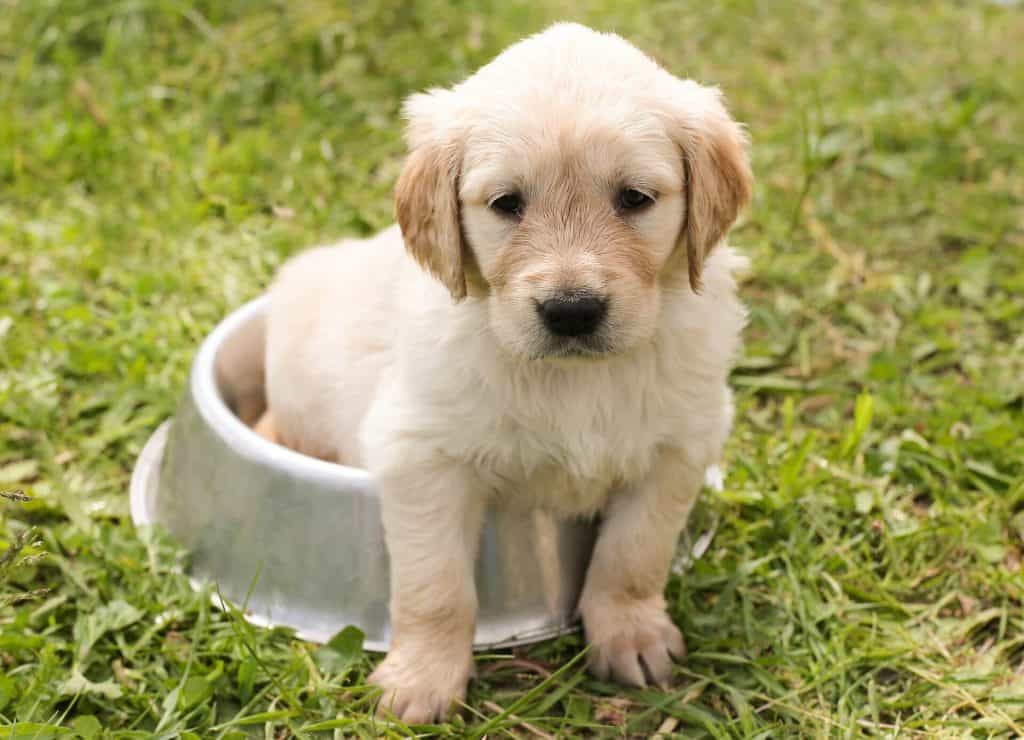 Intestinal parasites can cause a dog to have a hard stomach. Puppies can be at especially high risk.

Roundworms are among the most common intestinal parasite that can hurt your puppy, though they aren’t the only ones. Puppies suffering from an infestation may throw up worms or have worms in their stool. They may also have pale gums, diarrhea, and a dull hair coat.

Make sure your puppy is up to date on all parasite preventatives. Keep them updated on all shots and give them a dewormer if needed.

An abdominal tumor may cause a bloated stomach from fluid buildup, along with vomiting of a blood-tinted substance or coffee-ground-like substance. Stools may also be black in color. If you notice vomiting, black stools, pale gums, or excessive salivating, get to the vet.

Dogs with stomach cancer may also suffer from lethargy, lack of appetite, and unexplained weight loss.

Thankfully stomach tumors aren’t common in dogs, but it’s still better to be safe than sorry.

Sometimes your dog’s belly may swell up if they eat too much too quickly, much like how humans can get a bit bloated from overeating.

Our furry friends don’t always understand when it’s time to stop eating. They may keep going until they literally can’t anymore, making them sick. If they somehow got into their dog food bag or ate way more than normal, they may have eaten to the point of illness. They may vomit and have diarrhea from their overeating.

While this may not sound all that problematic, it’s best not to take any chances and call the vet. An overfull belly can still cause problems. And with how dangerous a hard, swollen belly can be it’s better to be safe than sorry. 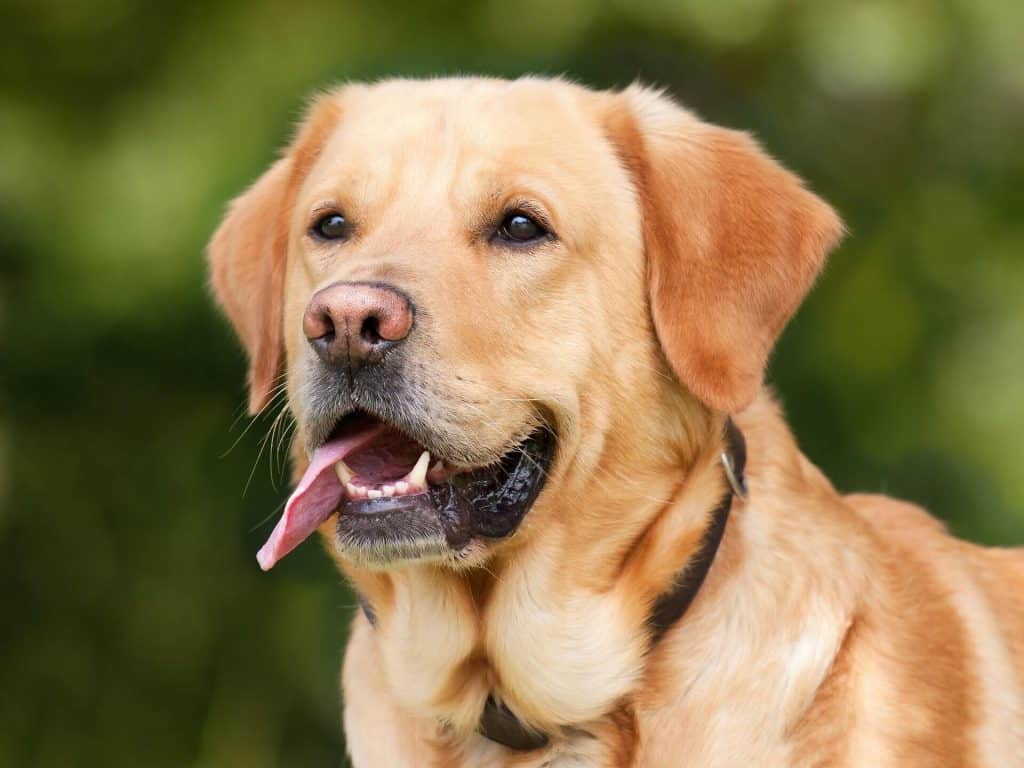 While a swollen belly could be a result of overeating, it’s’ still safer to call the vet.

When to Call a Vet

While some health issues can be solved with a “wait and see” approach, a hard stomach is a different matter.

Just about all of these conditions listed above can be life-threatening to your companion, so it’s best to reach out as soon as you notice a hard belly. While it’s possible they may have just overeaten and the problem may resolve itself, there’s a higher risk that they’re in real trouble.

If your pup’s swollen belly is accompanied by any vomiting, lethargy, rapid breathing or heartbeat, or any other concerning symptoms, it’s especially crucial to get to the vet immediately.

Examine your pup’s stomach often, especially if you suspect there’s an issue. Touch your companion’s belly for unusual hardness, sensitivity to touch, lumps, heat, and swelling. If you find any of these, you need to call the vet to be safe.

Always keep your emergency vet’s information on hand so that you can make the trip as easy and quick as possible. 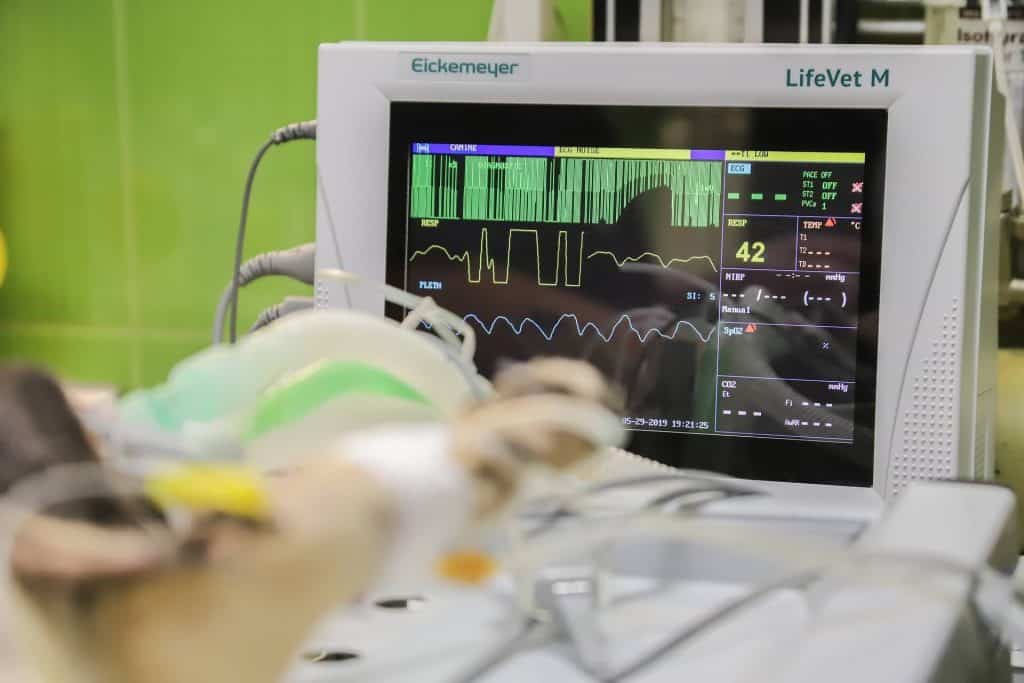 A hard stomach is a major red flag, and it’s best to contact your vet immediately.

For dogs, hard stomachs can be an immediate red flag towards something potentially life-threatening. From sudden, devastating problems like GDV to slower problems like cancer, a hard belly is generally never something to shrug off.

Call the vet immediately if you notice your dog’s belly is suddenly hard or swollen. Especially if they’re showing any signs of pain like excessive panting, drooling, or collapsing.

Even if you think your pup simply ate too much, I would recommend at least calling the vet anyway. The potential consequences of ignoring a hard belly are just too high.

To prevent problems, try to keep your dog on multiple meals a day instead of one large meal. Avoid elevated bowls, and watch their age and weight. If you have a puppy, make sure you’re staying on top of preventatives for parasites, and watch their stools for any abnormalities like worms.

Please take your companion’s stomach problem seriously. A hard, swollen stomach is generally never normal and is pretty much always worth a vet call.