Hiccups are annoying, both for humans and dogs. They come out of seemingly nowhere, and while they don’t hurt us, they can be a nuisance. There’s also a bit of uncertainty about where they come from and how to get rid of them, so many of us just power through them.

Our dogs are no different from us in this regard. They may seem fine one second, and then the next they’re making the weird noise we all know and hate. Thankfully, like with us, they’re more of an annoyance than anything.

They often occur in puppies and can be caused by overeating, overdrinking, or stomach issues. Overexcited dogs may also get them afterward. Some may even get them when they’re cold or overheated.

While hiccups aren’t a problem for your dog on their own, you should be alert if you notice any other issues like breathing difficulties, vomiting, or if they are a constant problem lasting longer than a few hours.

Hiccups are caused by sudden spasms of a muscle called the diaphragm, which is a muscle involved in the breathing process. This muscle usually moves slowly and smoothly, but sometimes it can spasm suddenly, causing a hiccup.

While annoying to both humans and dogs, they don’t normally hurt and should go away within a few minutes to a few hours. Your companion may be a bit freaked out if it’s their first time having them, but they shouldn’t be showing any signs of stress or pain, and it should pass pretty quickly.

Researchers don’t know the exact cause of this reaction. Some believe it’s a mechanism left over from when we were still in the womb. It’s also believed to be a reaction to swallowing too much air, especially in a dog’s case. 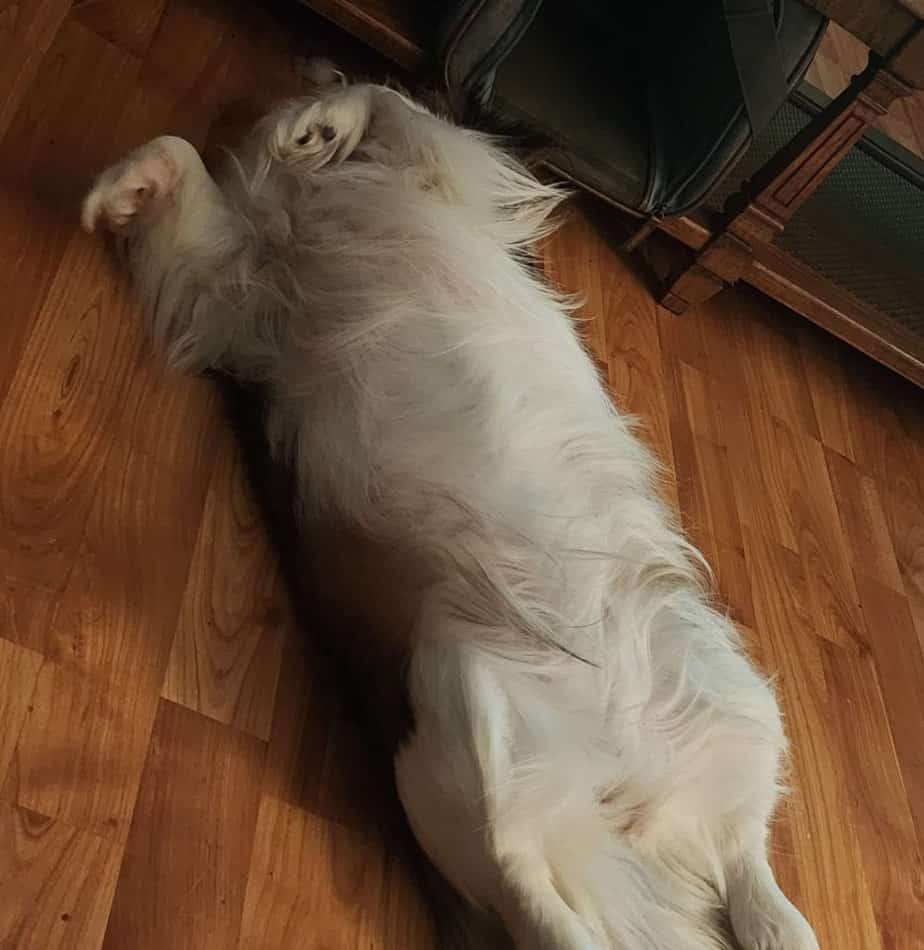 Hiccups are annoying but mostly harmless. They can be caused by a number of different things.

Hiccups tend to occur more in puppies than in adults. Their muscles aren’t as strong as an adult’s yet, which may cause their diaphragms to contact more. They’re also more prone to swallowing air more due to to their high energy and overexcitement.

Even daily hiccups can be normal in puppies as long as it’s not accompanied by any other more series problems like breathing issues. So if your new puppy seems to be having them almost every day, you probably don’t need to worry.

2. Eating or Drinking Too Quickly

Many dogs get hiccups after devouring food too quickly or taking in water too quickly. In their rush, they may swallow more air, causing irritation and contractions in the diaphragm.

If your pup gets the hiccups right after eating their dinner or getting a long drink of water, they probably ate or drank too fast. If this is a constant issue, you may want to consider investing in a slow feeder or puzzle feeder. These special bowls can force your pup to eat their food slowly, which is healthier for them anyway.

Make sure your dog has a consistent water source so they don’t feel a need to tank up all at once. Depending on the size of the house, they should have multiple sources of water they can get to. They should have easy access to water no matter where they are in the house.

You should also make sure that your dog is on a consistent feeding schedule so they aren’t starving by the time you feed them. If they’re too hungry by the time they finally get to eat, they may scarf down their food without even tasting it. Smaller meals spread out over time may be better than one large meal. 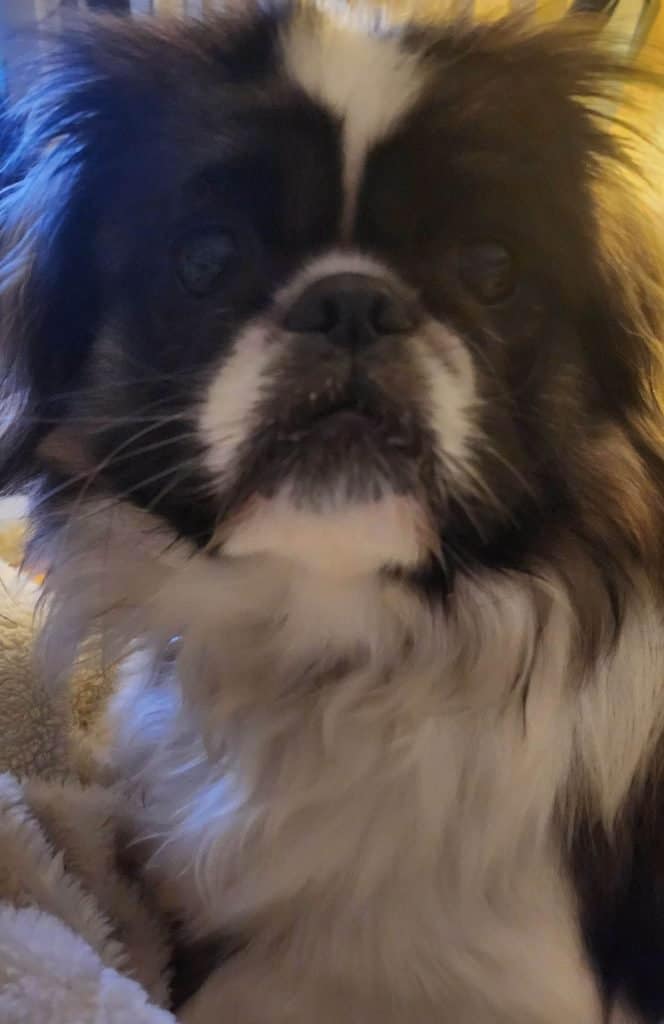 Dogs can get hiccups from eating or drinking too fast. It causes them to swallow more air, irritating the diaphragm.

When a dog gets too excited, their heart rate increases and they may take shorter breaths. All of this can irritate the diaphragm and cause hiccups. If your dog just had a huge, fun play session, they may have the hiccups as all of the excitement impacts their diaphragm.

If your pup has them after getting overexcited, make sure they get a long but slow drink of water. While drinking too fast can irritate the diaphragm, a slow drink can also help calm it down.

Stress and anxiety can also impact your companion’s breathing muscles and cause them. If you notice other signs of anxiety like panting, pacing, or a tucked tail, they may be stressed or anxious about something. Make sure you’re identifying your pup’s anxieties and finding ways to manage them.

If your pup is stressed, anxious, or just needs to calm down, you can try giving them belly rubs and massages. They can help calm your companion’s breathing, which should help get the problem under control.

It’s believed that hiccups can actually be a useful mechanism for helping your pup’s upset stomach. They may help relieve stomach gas. Food intolerance or food allergies can cause problems in the stomach. 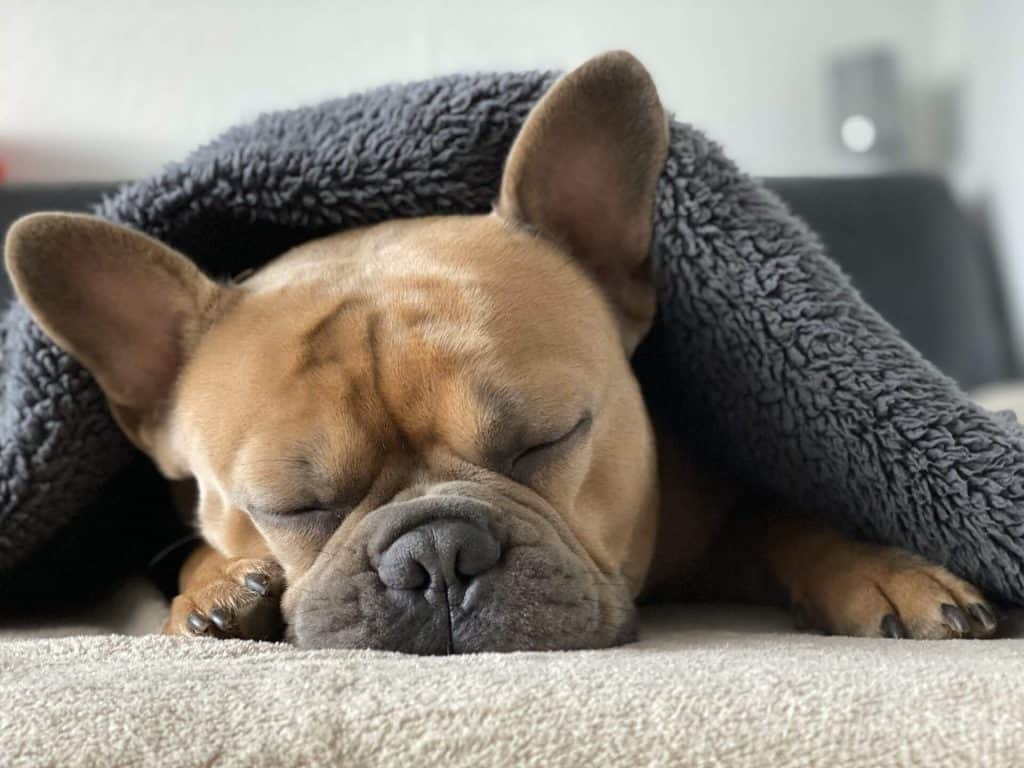 The stomach muscles and the diaphragm also aren’t far apart and it can be affected by an uncomfortable stomach.

Food intolerance or allergies can irritate the diaphragm as well as the stomach.

Some puppies may get hiccups if they get cold. If your pup suddenly has them, check to make sure they aren’t shivering or that they’re not uncomfortably cold. If you’ve been keeping your house cold and think the temperature may be giving your friend trouble, you may want to turn it up a few degrees.

Make sure your puppy has blankets to curl up in and warm beds to lay in. Don’t make them sleep on a cold floor or in a cold crate.

On the flip side, make sure they aren’t getting too hot either. While not the most common symptom, hiccups can be an early indicator of heatstroke.

Make sure you’re not keeping your pup out in intense heat for too long, and look out for any other symptoms of heatstroke. If they show any signs of heatstroke while you’re out in the heat, get them inside ASAP and get them some water and let them cool down. 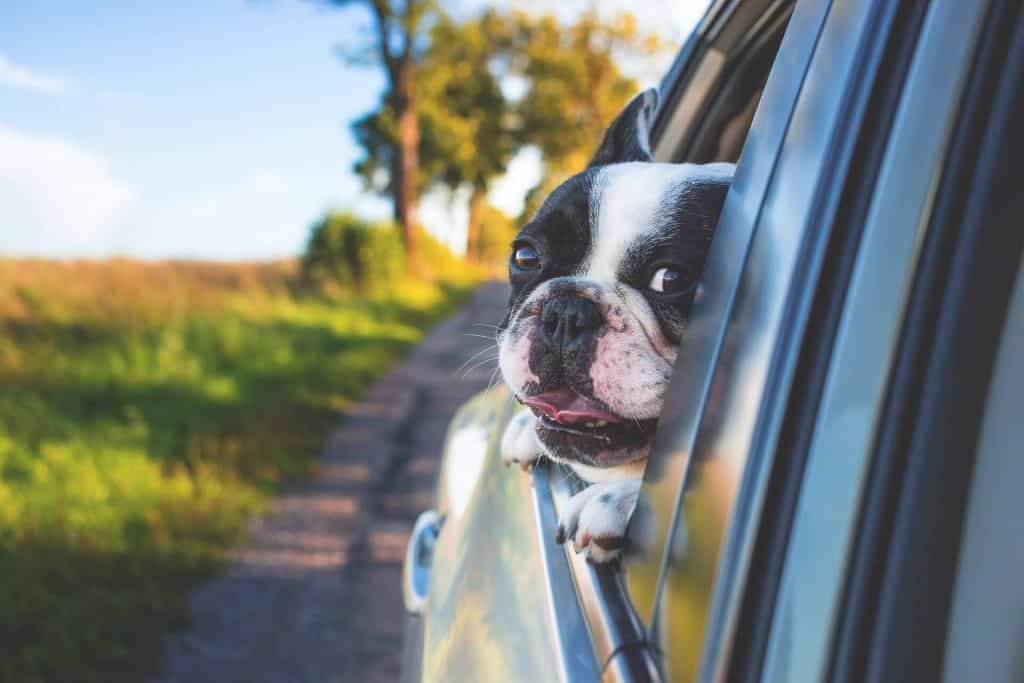 Dogs may get hiccups if they get too hot or too cold. Always be aware of the temperature your pup is being exposed to.

While hiccups will usually go away on their own, there are some small things you can try to help them get over it faster or prevent them from getting them in the first place.

You can try offering your pup a drink of water. Just make sure they drink slowly.

If you offer them water, make sure you stay with them and watch them drink. You never know when a badly timed hiccup can cause them to choke on the water.

Have your companion lay on their back and just rub their chest and belly slowly. Do not offer any food or water during this time as they could choke.

As stated earlier, there are special bowls out there for dogs who tend to gobble their food up in a hurry. If your pup constantly has problems eating too fast, it may be worth investing in one.

It may also help to feed your companion smaller meals spread out throughout the day instead of one large meal.

If your pup is consistently getting the hiccups soon after eating, they may have a food allergy or intolerance upsetting their stomach, as that can also irritate the diaphragm.

You may need to change your pup’s diet to different ingredients that won’t upset their stomachs. They may need food with fewer grains or different meat.

Don’t be afraid to contact your vet if you’re having a hard time figuring out what food is best for your companion. An elimination diet may be necessary to find out what’s causing it. 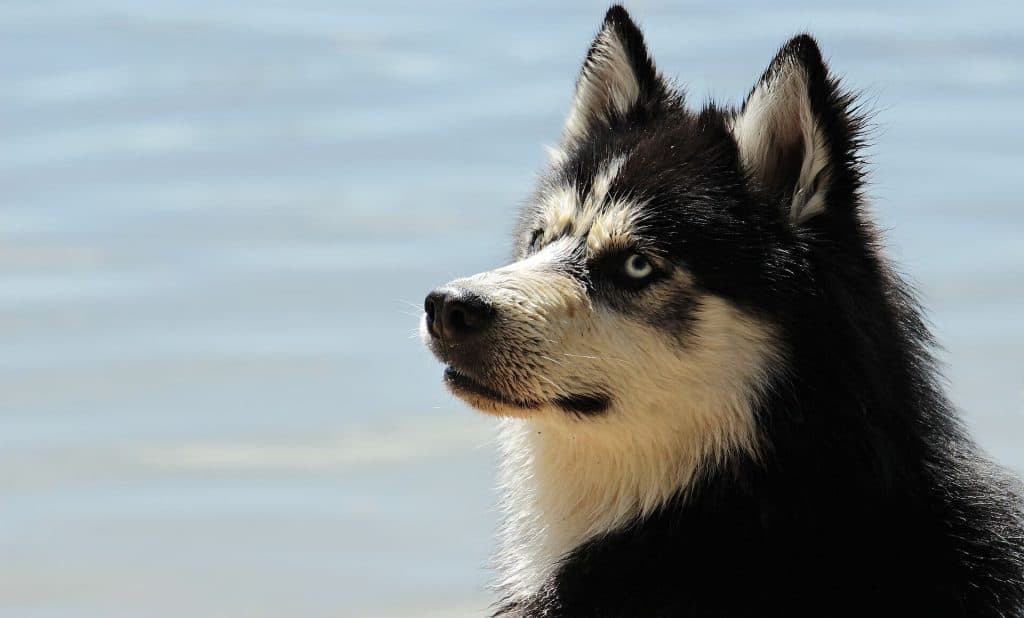 While there are ways you can help, hiccups are usually not serious and your pup will likely get over them on their own.

Hiccups are usually nothing to be worried about. They’ll go away on their own in a few minutes, maybe a few hours at the most. If they don’t go away after a few hours, it may be worth taking note of and looking for any other symptoms and calling the vet.

While usually not anything serious, they can be an early indication of respiratory problems, heart problems, pneumonia, or a stomach problem. If your dog is having any other breathing issues like coughing or wheezing, the hiccups may be a sign of a larger respiratory illness.

You should also be on the lookout for any excessive drooling, vomiting, or any other signs that they’re in pain. Refusing to eat or drink is also a big red flag that something’s wrong.

Never be afraid to talk to your vet if you think something’s wrong with your dog. It’s always better to be safe than sorry. 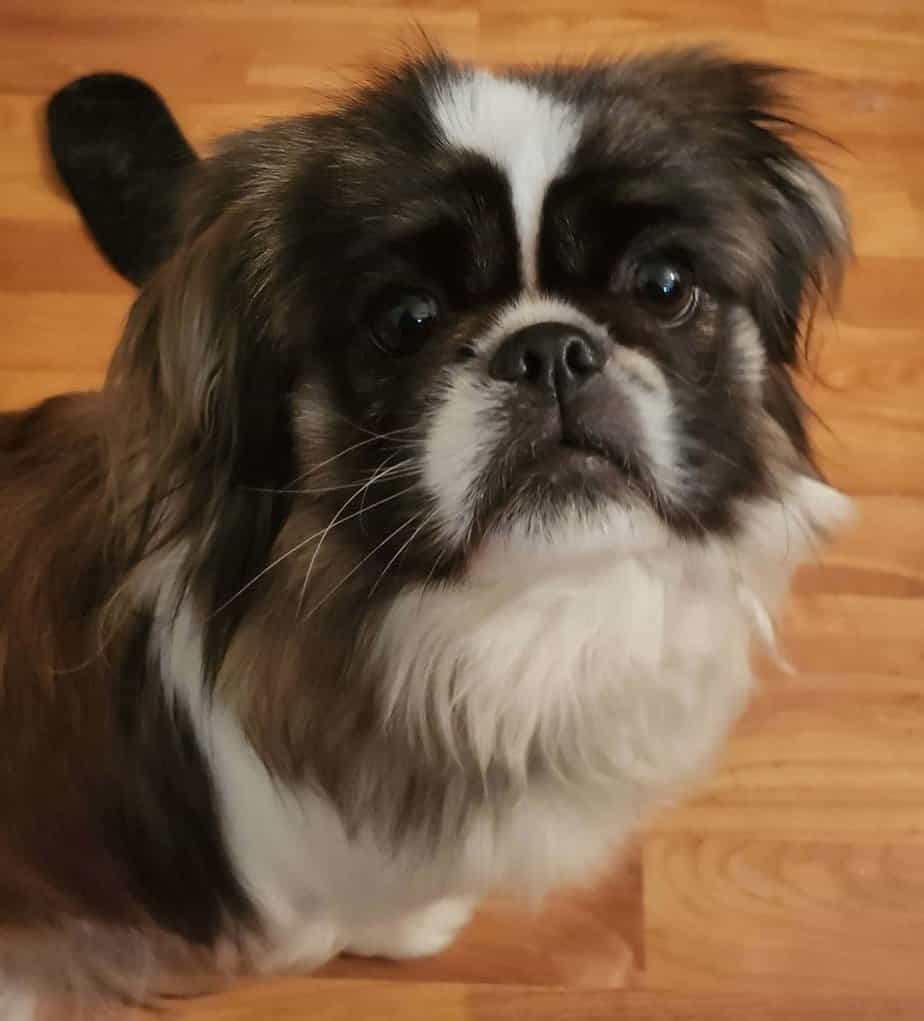 Always call the vet if you suspect that something’s wrong with your companion. Vomiting, breathing problems, and lethargy can be major red flags.

Hiccups can be an annoying mystery, but they’re usually harmless, both for humans and dogs. As far as we know, they’re just caused by contractions in the diaphragm. They are possibly a leftover function from when we were in the womb, which may be why puppies are more prone to them.

They seem to mostly occur after eating or drinking too fast, getting overexcited, getting an upset stomach, or getting cold or too hot. All of these things can cause a dog (or a human) to take in more air, irritating the breathing muscles and causing them to contract, causing the annoying hiccups.

When soothing them, you can try offering your pup some water, giving them a belly rub, or taking them on a short walk to distract them. Just make sure you don’t overexert them and don’t try to give them a huge meal or drink until the hiccups pass. You don’t want them choking.

While they are usually nothing to worry about, it’s always important to be on the lookout for any other signs of pain or difficulty breathing or swallowing. Vomiting, diarrhea, and lethargy are all red flags. Hiccups also should not last longer than a few hours. Always contact your vet if you’re worried something’s wrong with your dog. 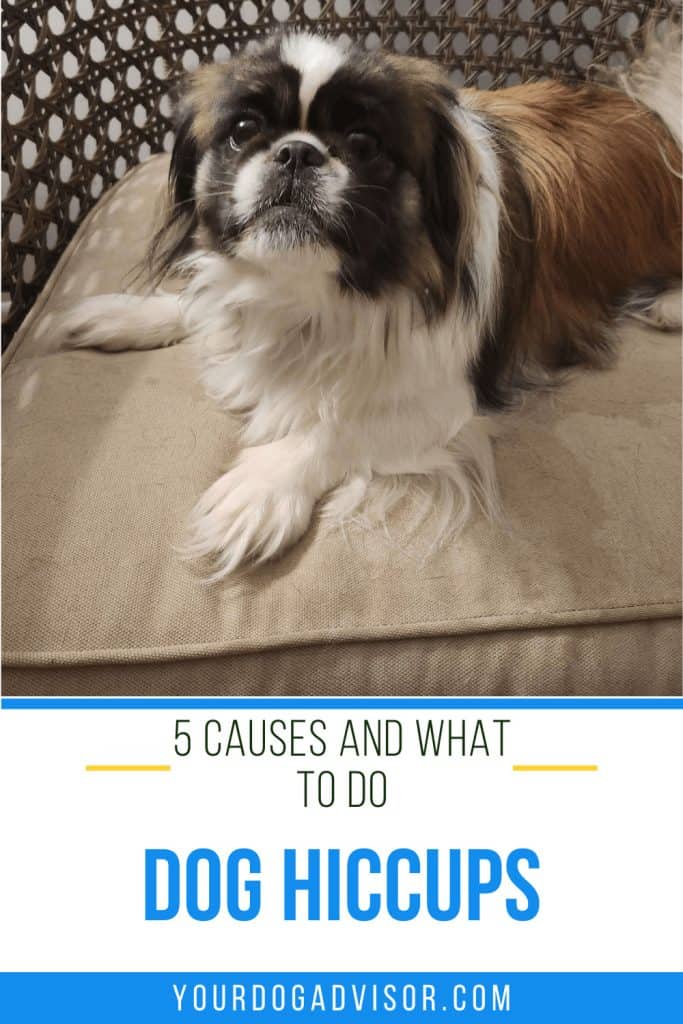 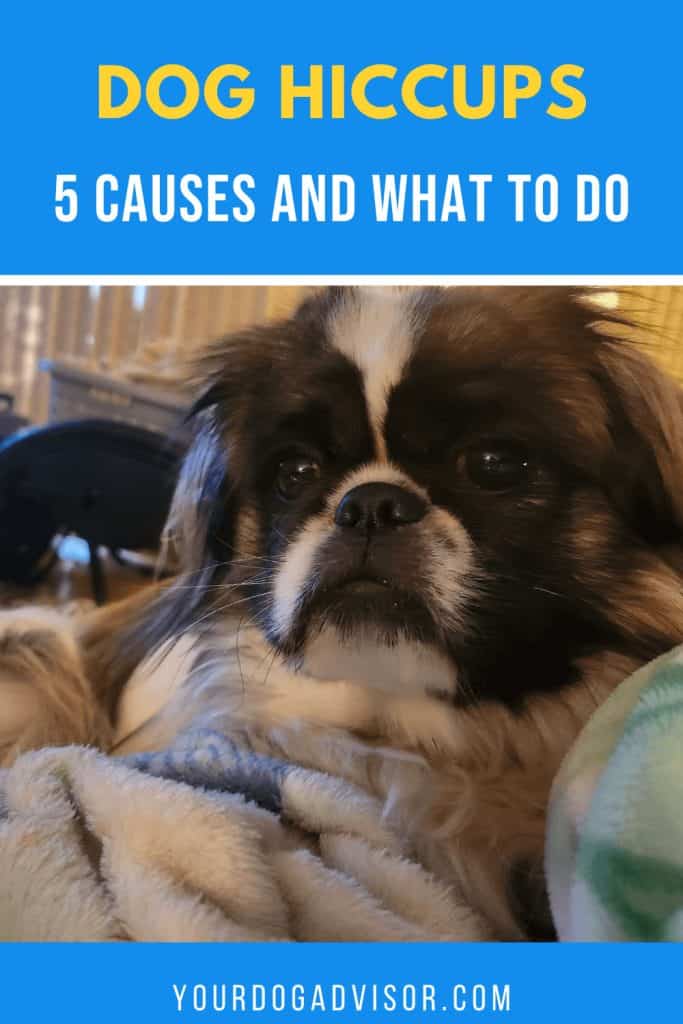