We love our dogs. So naturally, we love showering them with affection, which may mean kissing them. Some of us smooch them on the head, the nose, or the face. For some of us, it’s as natural as tail wags are to them.

But do our companions actually like this gesture? Of course, we want to think they do. But the answer isn’t so simple and can vary between individuals.

The truth is, dogs don’t naturally like kisses. They don’t even know what they are. But as you have probably seen in your daily life or on the internet, that doesn’t stop humans from loving on their companions, and many of them seem to like it and many show affection back.

While they may not know what they are at first, our companions can come to like kisses. A study shows that dogs can experience feel-good hormones from being smooched by their humans. This is probably because they learn to associate them with love and happiness as time goes on.

That said, it’s important to know what their natural instincts say and how to judge when leaning in too close to a dog is a bad idea. Not all of them want kisses, especially not from a stranger. Some individuals may not even want them from their favorite person. 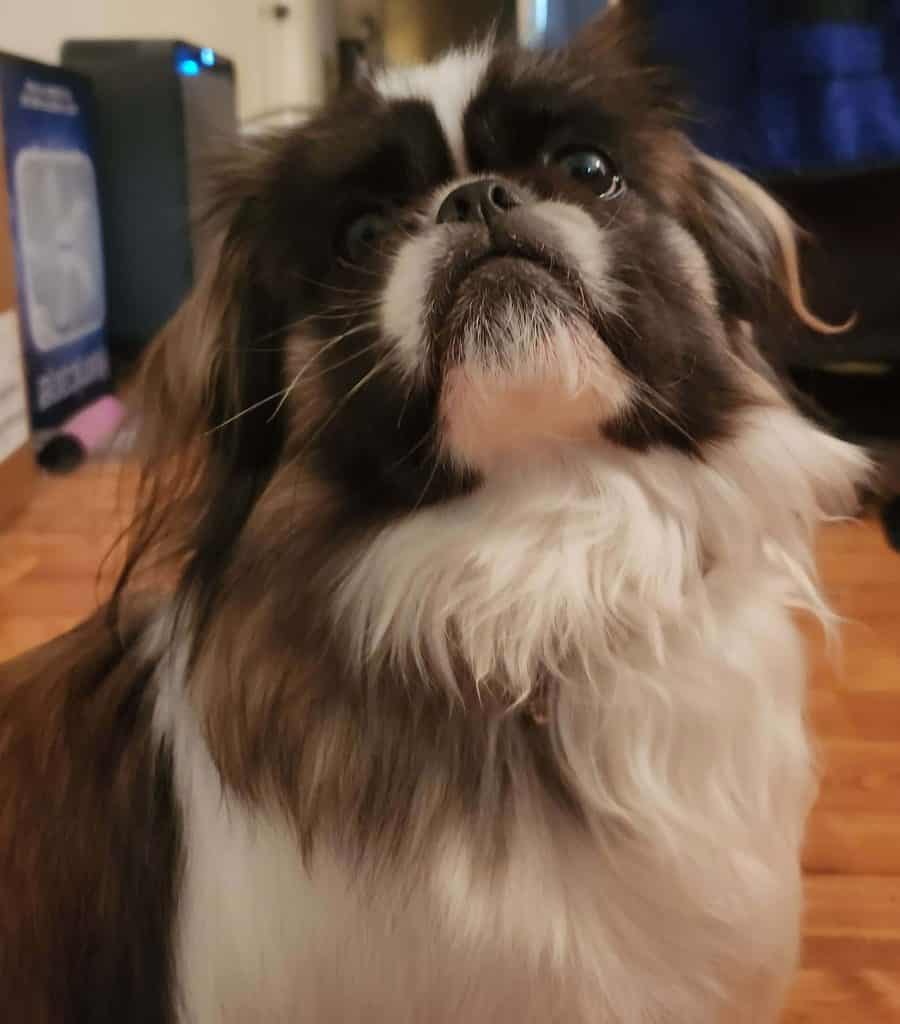 Do Dogs Know What Kisses Are?

Our furry friends aren’t naturally born knowing what kisses are, at least not the human version. It’s not in their genetic code or something they’ve evolved to recognize. So they may be confused at first when you smooch them, especially young ones who haven’t experienced human affection yet.

Even licking, which is often seen as their version of kissing, isn’t necessarily the same. They may eventually lick us because they learn that we like it, and so they keep doing it. But they don’t necessarily know what it means to us.

As your pup continues to live with you and receive kisses, they may get used to them and learn to associate them with affection. They may grow to like them because of that, but they don’t understand what they are or why we like them.

Dogs have different instinctive habits than humans, having evolved from wolves in the wild. They may not naturally like making eye contact, and they may be nervous about being faced head-on.

Our habit of facing loved ones and trying to smooch them may not translate well for every individual. They may even take our attempted affection as a threat or challenge. Keep in mind that they likely have no idea what we’re doing or what our intentions are at first. 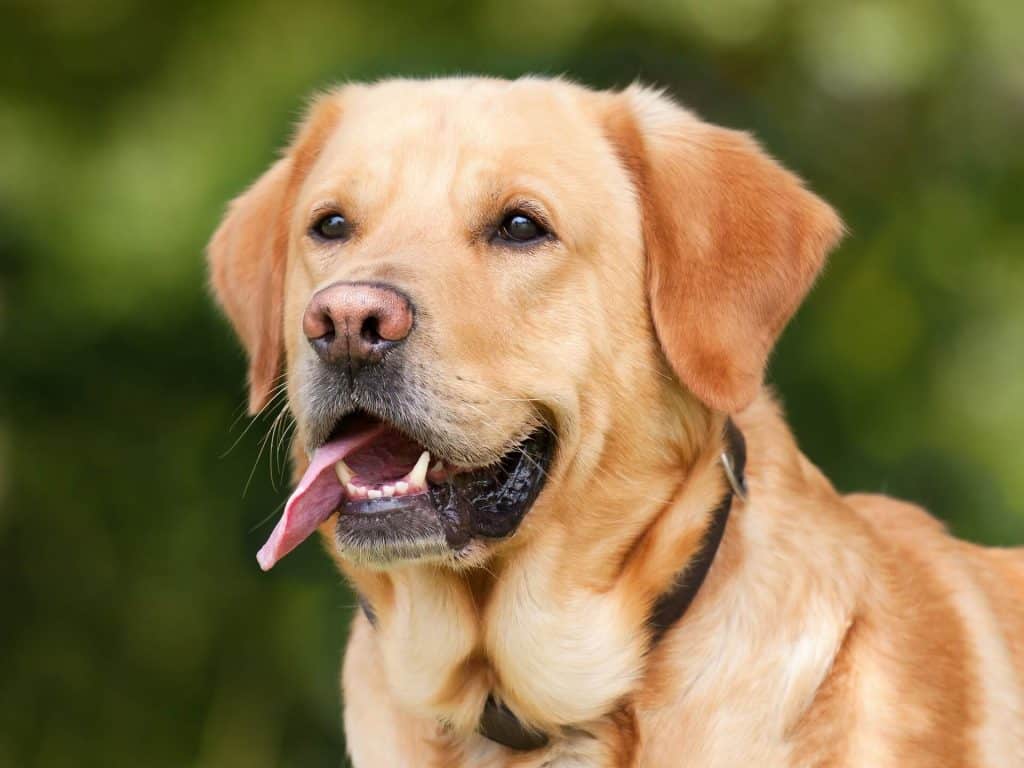 Our companions may instinctually dislike making direct eye contact or having someone lean in close to their faces.

While dogs can learn to like kisses over time, it’s not a good idea to immediately try to smooch a new pup, especially one who hasn’t gotten used to human behavior. Let them get used to you and your different behaviors first.

Never try to smooch or hug a dog who looks scared or threatened. They may see it as a threat and instinctively lash out at you.

Our furry companions are pretty quick learners and can figure out what we do and do not like. They can also sense our emotions and find out when we’re happy or sad.

Because of this, our companions can learn to enjoy kissing. As time goes on, they associate our smooching as a sign of affection and happiness. Kissing them makes us happy, and that makes them happy too. Many dogs come to love the action as a result. Some may even beg for them.

Giving your pups treats when you smooch them can also help them associate the action with good things. As they associate them with treats and good emotions, they’ll often be more and more open to it.

Our companions love making their humans happy. While they don’t naturally understand what kisses are, they can learn to like them if they learn that they make you happy. 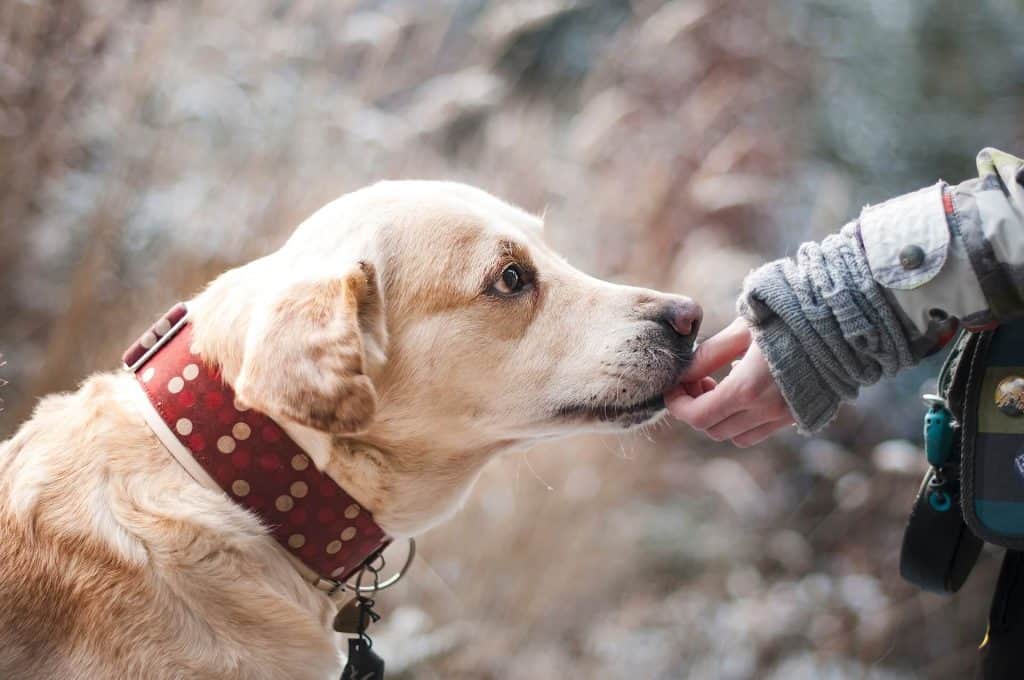 Dogs can learn to like or at least tolerate our forms of affection because they can tell that we enjoy them.

Your pup may lick you in the face, on the hands, etc. as their own way of showing affection. We take this as their way of kissing us, but that’s not necessarily the case.

While licking can be seen as a sign of affection, it’s mainly a survival instinct. Dogs may lick to communicate submissiveness or to learn more about another individual. They also use their tongue for cleaning. While it can release feel-good hormones, it’s not always meant to be a form of kissing.

That said, they may learn to lick their humans as a sign of affection over time. They learn over time that licking us makes us happy, so they keep doing it. They don’t realize we consider it kissing, they just want to make us happy.

Different dogs have different triggers just like humans do. While one pup may grow to love smooches, another may always hate them. They may make some pups uncomfortable. Some may just tolerate them for their favorite person’s sake. For some individuals, it may depend on their mood.

Always watch a dog’s body language when considering any form of affection. If they don’t like making eye contact or being approached from the front, they probably aren’t going to let you lean in that close to their face. If they seem standoffish in any way, trying to smooch them may get you hurt. 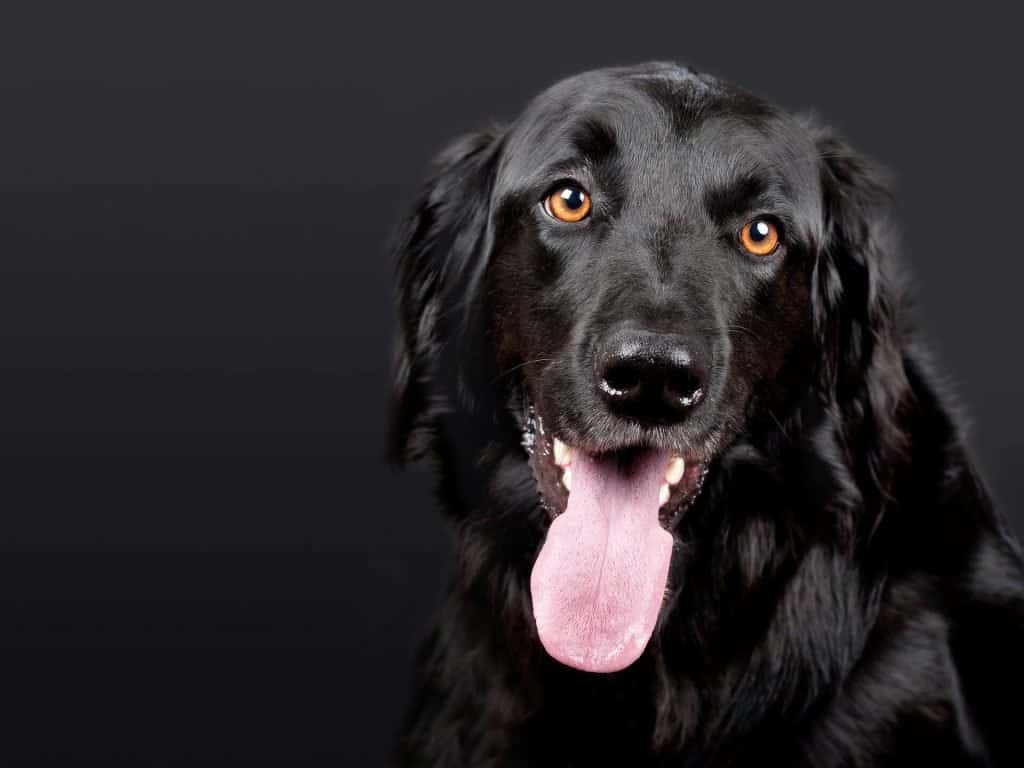 Different individual pets have different thresholds for what they will tolerate. Some may eventually like being kissed, some may not.

If your pup turns their head away or averts their eyes when you try to lean in too close to them, that can be a red flag that they don’t like it. They may also stiffen up or lick their lips.

Even if you’ve had a pup for a while, they may just never be comfortable with a human getting in their face. If that’s the case, respect it. Don’t force your forms of affection on to your companion.

Don’t take it personally if your pup never warms up to your form of affection. It doesn’t mean they don’t love you. Some individuals just aren’t okay with certain forms of affection, just like humans.

Also keep in mind that your companion may have a past of abuse, neglect, or another traumatizing experience that may make them more reluctant to accept a human getting in their face.

Never get in the face of an anxious dog to try to smooch them. Don’t try to reach out and hug them either. If your pup seems anxious, getting in their face or hugging them probably won’t help. Look into other ways to ease their anxiety.

We love kissing our furry companions, but that doesn’t mean they feel the same way. The reality is, they just don’t understand what we weird humans are doing. But that doesn’t always mean they hate it either.

Our companions can learn to love kisses through learned experiences. As they associate them with experiences of love and affection (and maybe treats), many come to love them. Some may even learn to lick us back, even if they don’t understand why that makes us so happy.

While many dogs learn to love smooches, many others don’t. Always make sure you’re watching a pup’s body language and never get in the face of one who isn’t familiar with you or wants their personal space.

Respect your companion’s boundaries and never force kisses or any other form of affection on a dog who doesn’t want them. Be patient with any new pets and learn what they are and are not okay with before showering them with affection. 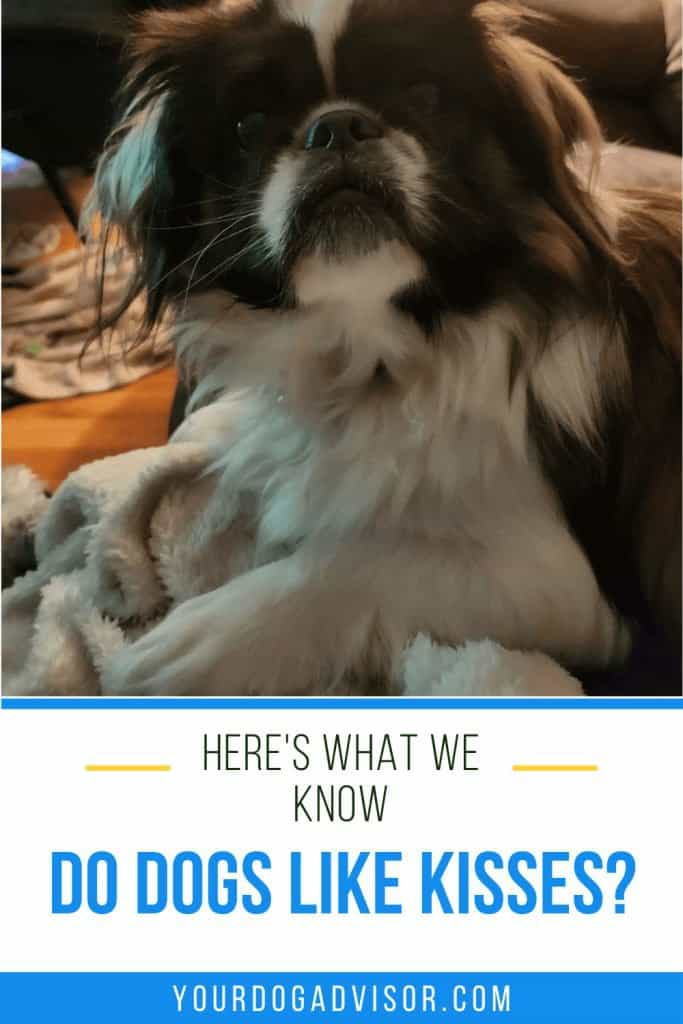 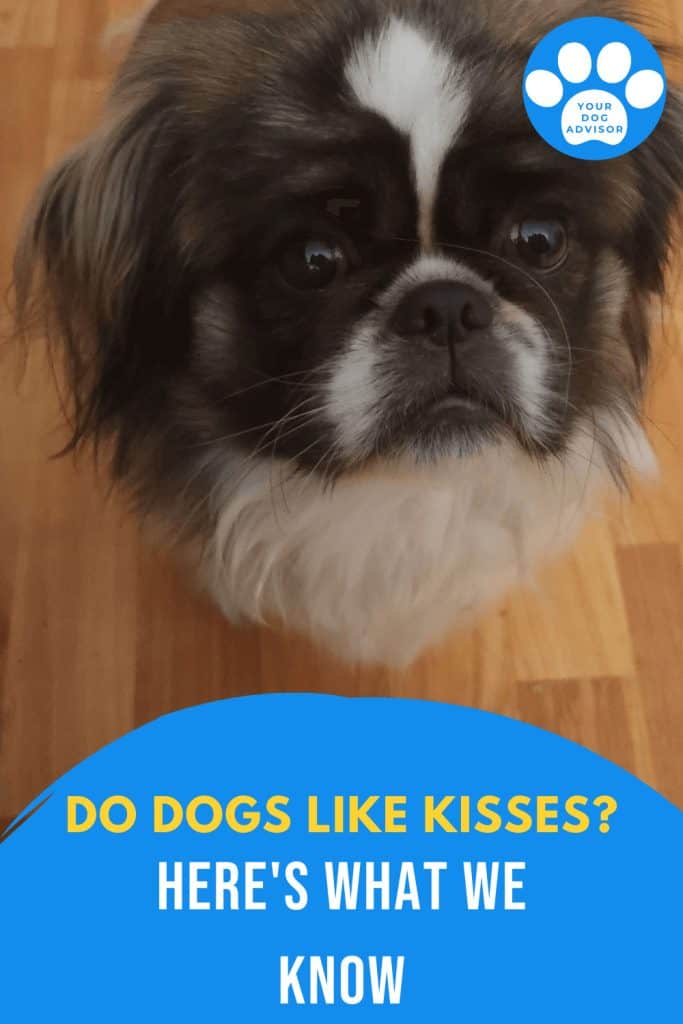