Potty training a puppy can be a frustrating experience with many setbacks. It’s easy to get angry when things go wrong and your puppy is peeing on your fancy carpet, no matter how hard you try to train them to go outside. A range of things can cause a puppy to refuse to go outside, ranging from anxiety to potty training issues or even health issues.

If your puppy is suddenly refusing to pee outside, it can be easy to get frustrated and start yelling at them, but try to focus that energy on finding the cause instead. If your puppy is refusing to go to the bathroom outdoors, there’s probably a valid reason. It’s not like they want to upset you.

There could be a health problem like a UTI, or something may have happened before or after meeting you to make them scared of the outdoors. Either way, it’s best to pinpoint the cause quickly and address it before your companion makes a habit of it. 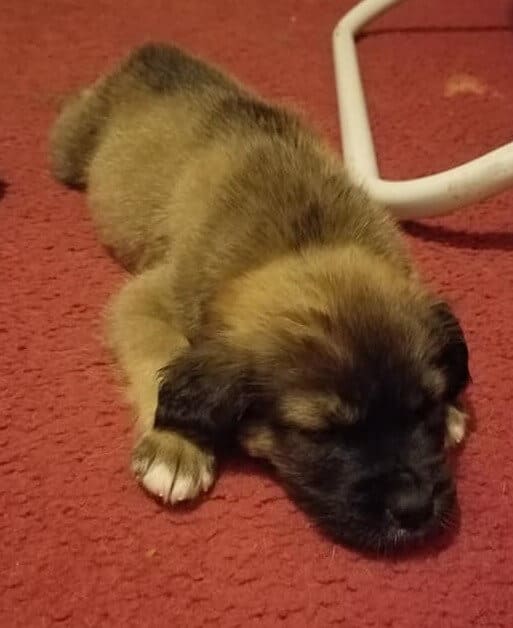 If your puppy is refusing to pee outside, it’s best to pinpoint the reason and address it quickly.

Potty training is a crucial part of your pup’s future. You need to make sure you’re getting it right to promote proper behavior in the long run. If you make the slightest mistake, you may unintentionally promote the wrong behavior.

Teaching your furry friend to go to the bathroom outside is a long process that takes time and patience. Make sure you’re taking them to their designated area on a regular schedule and rewarding them whenever they get it right. You should be taking them out several times a day, no more than 10-15 minutes after eating, drinking, or playing. Puppies have small bladders and can’t hold them long.

If they mess up and have an accident, get their attention and move them to the right area if possible. Don’t ever harshly scold or punish them.

While you want to give them treats for going to the bathroom, make sure you wait until they’re done peeing first. If you interrupt them with treats and praise, they may not finish until they return inside and realize they still need to go.

Make sure you stay consistent with your training throughout puppyhood. It’s easy to think you’re done and ease up after a month accident-free, but slacking off can easily throw your dog off and cause accidents and confusion.

Anxiety is one of the biggest reasons why a puppy may refuse to pee outside. If this seems like a sudden issue, consider if anything scary has happened while you two were out walking recently.

It could be a scary run-in with another dog, a scary loud noise from a motorcycle, or a scary experience with a human. If something has scared your pet once, they’re going to be scared to go out there again. And if they’re too nervous to relax, they aren’t going to pee.

Try to find a quiet, calm spot away from people and other dogs for your puppy to use the bathroom. You want their outdoor bathroom to be a safe space. Keep the route consistent at first. Let them sniff around as much as they need to feel secure.

Some dogs may just be nervous about the outdoors in general, especially if they aren’t used to it. It’s a big world with a million scary things in it.

If your pup is too focused on their surroundings and refusing to walk, they may be intimidated by something. If your pup seems fearful or distracted during walks, try to keep them focused on you with treats, preferably their favorites.

Make sure you’re keeping track of your dog’s stressors and managing their anxiety. You may want to consider calming supplements or other methods to help ease their anxiety outside.

The first thing you want to do if your puppy is refusing to pee outside is rule out any medical problems. There are quite a few common issues that can cause constant urination and for your pup’s bathroom schedule to get thrown off.

There’s no point worrying about your potty training routine if what your pup actually needs is a vet visit.

UTIs are among the most common health problems that can cause potty issues. They can cause your pup to feel the need to go frequently even if there isn’t much to get out. This can throw off their schedule, causing them to go inside instead of outside.

If you just went out and your pup is still peeing inside, watch and see if they’re straining. Your pup may also cry out if it’s painful. Be on the lookout for any blood in their urine or licking of their genitals. They may also be drinking more water.

While UTIs can be a pain, a vet can diagnose and provide antibiotics for them. If you suspect your puppy has a UTI, go to a vet to have it confirmed. 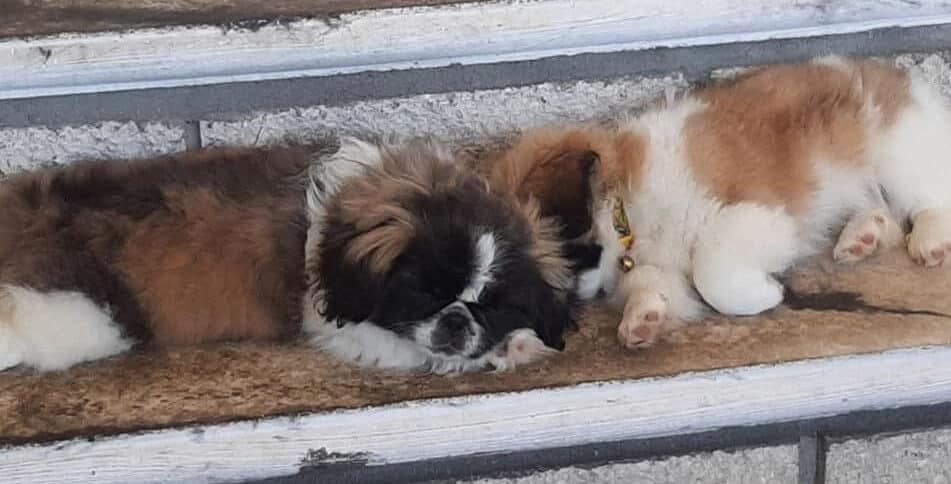 UTIs and other health problems can mess up your pup’s bathroom schedule and cause them to pee inside more.

Kidney infections can also cause your companion to have even less control over their bladder. They may urinate more, drink more, and strain to urinate. In more serious cases, they may also lose weight, appetite, and they may vomit.

Kidney problems can be serious and even life-threatening. If you notice any of these symptoms, go ahead and call a vet. It could just be a UTI, but either way, it’s best to get it diagnosed and treated.

Kidney disease is more common in older dogs, and it’s not likely for a young puppy to have it. That said, it’s important to catch it as early as possible if your pup does have it.

Pets can get diabetes just like humans. It’s more common for the older population, but young ones can still get it.

Excessive thirst and increased urination are potential early signs of diabetes in your puppy. This may mess with your puppy’s bathroom schedule and make it harder to go when they’re used to going. They may also have an increased appetite while also losing weight.

Diabetes can be managed with a vet’s help. It’s important that you get it diagnosed as early as possible if you suspect your puppy has it.

Marking can become a serious behavioral problem, especially among males. Dogs who are marking territory aren’t peeing because they need to go or because they’re sick. For them, marking is a social behavior that helps them assert dominance.

Rather than leaving a puddle somewhere, your pup may be leaving small amounts of urine on items or spots to indicate ownership.

If you catch them in the act, react how you would with any accident: get their attention to correct them, take them outside, and praise them with treats when they go where they’re supposed to. 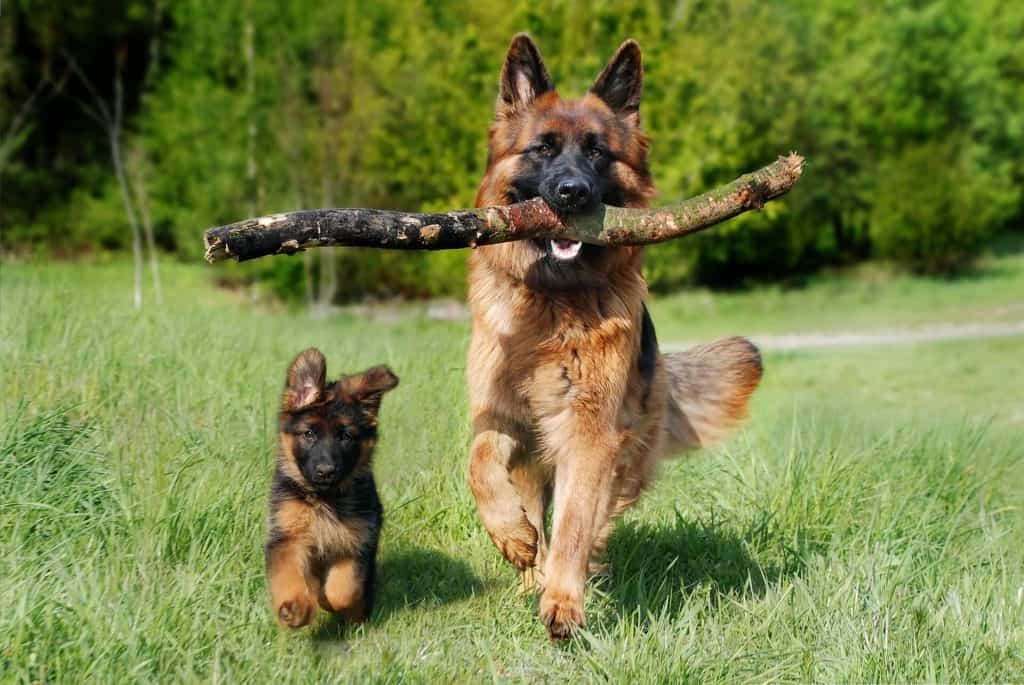 Puppies may pee in your house more frequently when marking territory.

Like with any training, getting mad and yelling won’t help them understand what they did wrong.

If your pup is marking, they may be more eager to mark on new stuff you bring in, so make sure you keep those off the floor and out of reach.

If your dog has started marking, it may be time to talk with your vet about getting them spayed or neutered. The longer you let it go on, the more likely it is to become a habit.

Dogs prefer to stay on a consistent schedule, and they can get easily mixed up if you suddenly change it up on them.

If you take them out to pee at a significantly different time than they’re used to, they may not need to pee at that time. But they will still need to go later, so if you don’t take them out then, they’ll end up going inside.

Keep your puppy on a consistent schedule as much as possible to reduce confusion and accidents. Once they’re used to peeing at a specific time, that’s usually when they’ll go.

Whatever the reason, not all dogs are immediately ready to go and be done with it. 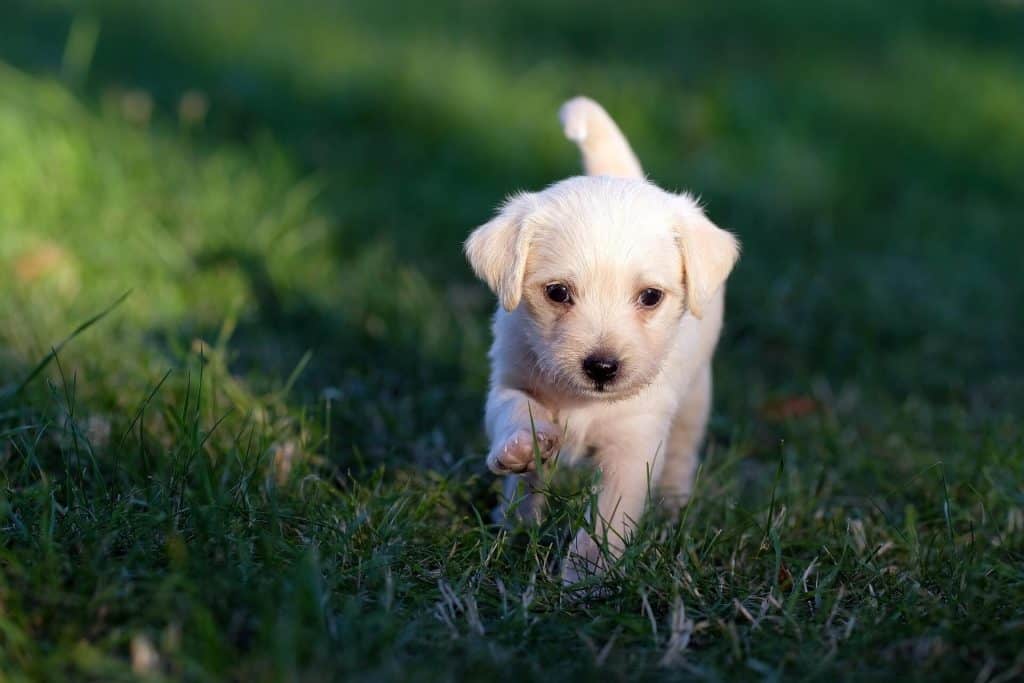 Make sure you’re giving your dog enough time outside to do their business. Rushing them will not make them go any faster.

If your pup needs some time before using the bathroom, give it to them. Rushing them will not make them go faster, and will just make you more frustrated. If you don’t give them enough time and drag them inside, they’ll inevitably go on your floor. I’ve learned this the hard way several times.

Make sure you’re not constantly distracting them to play or talk with them. They may need to focus to find the right spot and pee.

You should be giving them at least 10-15 minutes before giving up. If they really refuse to go at that point, you can take them in and put them in their crate for about 15 minutes before trying again. Not as a punishment, but just to make sure they don’t wander around and go on your floor.

Make sure you’re keeping your puppy confined while they’re still in potty training. Keep them confined to their crate when you can’t watch them, and keep them in a small space where you can see them when you are watching.

If you give them too much room early on, they’ll inevitably wander off, lose control of their bladder, and pee before you can notice and get them to their designated area.

Dogs don’t generally like to pee where they sleep, so they’re less likely to pee in their crates or near their sleeping space. If you can’t watch them, it’s best to keep them there until they have full control of their bladder. Make sure your pup’s crate is the right size for them. 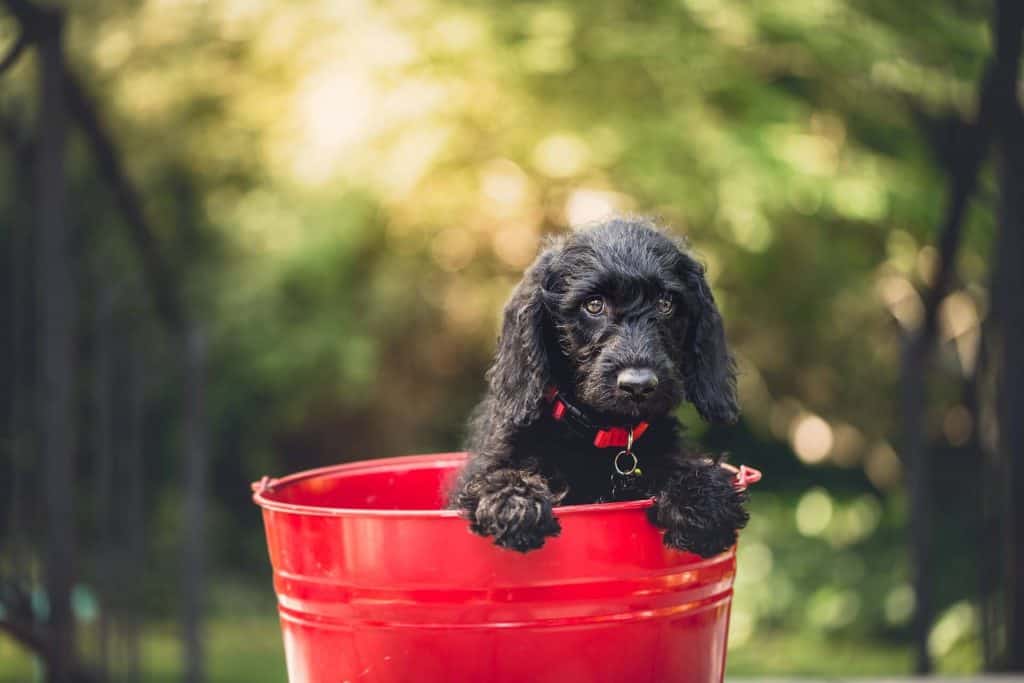 Make sure you’re watching your dog while they’re in potty training. Catch any accidents quickly and show them the correct place to go.

Getting Your Puppy to Pee Outside

It’s frustrating when your puppy won’t pee outside, but there’s almost always a valid reason for it. Puppies aren’t doing it to be spiteful or mean. They may be on an inconsistent schedule, they may be scared of something outside, or they may even be sick.

It’s important to stay patient with your furry friend and calmly narrow down the cause of the behavior. You may need to make some adjustments to your potty training routine, or you may need to head to the vet to solve a health issue.

Whatever the problem is, you want to solve it quickly. If it’s a health issue, you don’t want your puppy sick for long as they don’t have strong immune systems yet. You don’t want it to become a bad habit either. You want to find the cause and address it quickly so you both can get back on track with your potty training. 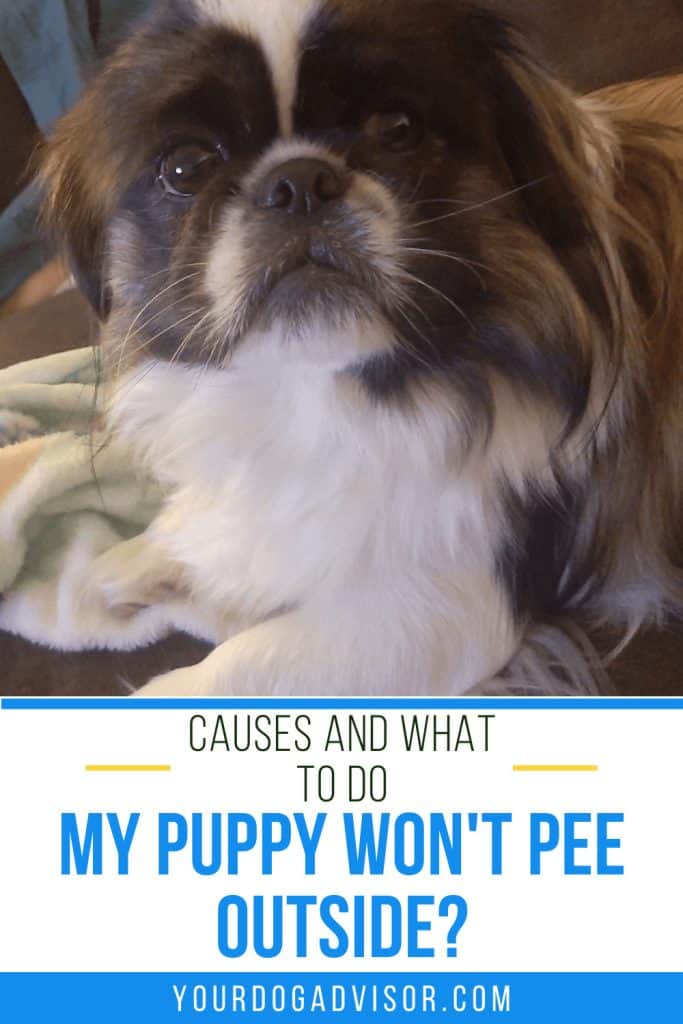 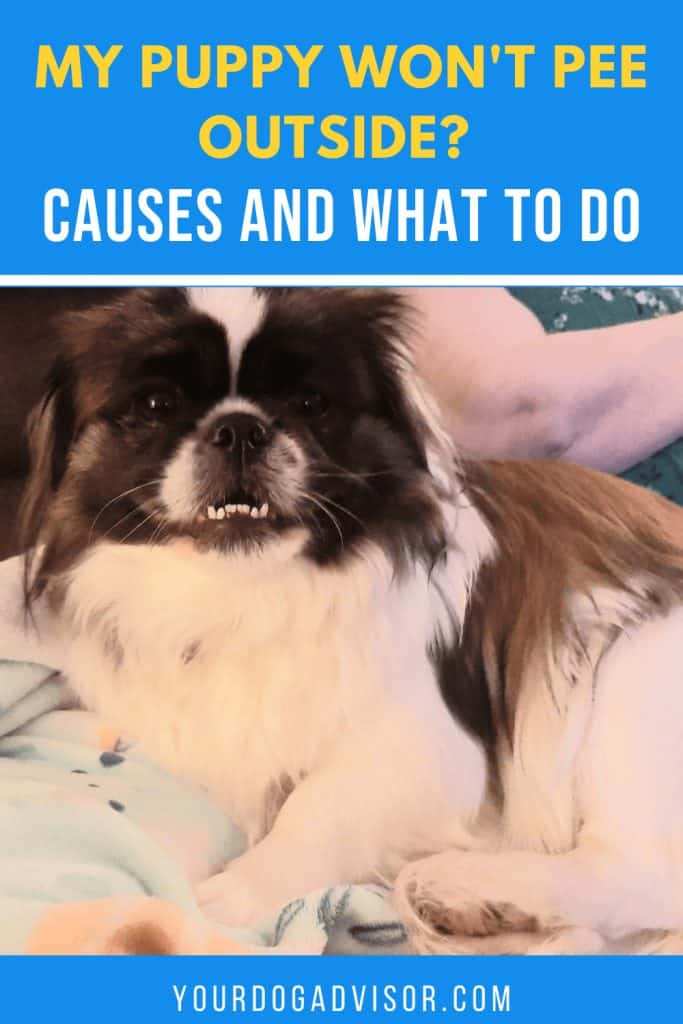