Puppies pee. A lot. It’s a fact of puppyhood and something you just have to push through.

Still, there is the chance that something’s actually wrong. Because puppies usually urinate so often, it can be hard to determine if you need to rush to the vet or if you’re panicking for nothing.

It can be tricky, but it’s up to you as the owner to pay attention to your dog’s bathroom habits and behavior and when know when to call the vet. There are some things to keep in mind before freaking out and picking up the phone to make an appointment.

How Many Times Does a Puppy Normally Pee?

Puppies pee several times throughout the day, especially in their early months. This is why pad training can be so useful as it gives them a place to quickly go without harming your floors.

Young pups can only hold their bladder for a couple of hours, with one hour added for each new month in their lives. For example, a two-month-old puppy may need to go every 2-3 hours. At three months, it may be 3-4 hours. 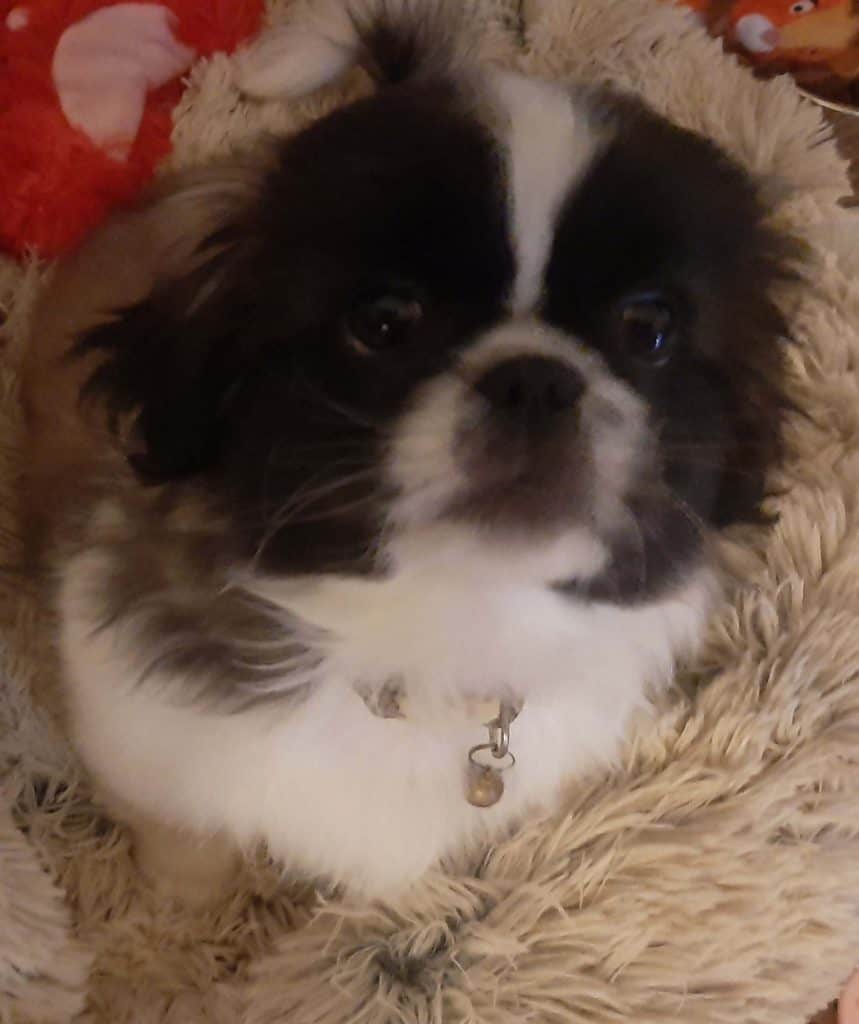 Puppies can only hold their bladder for a couple of hours depending on how many months old they are.

They need to go no longer than 10-15 minutes after intense playing, a large drink of water, or a meal. They also usually need to pee soon after waking up. It doesn’t matter if they just went an hour ago, they’ll probably still need to go again.

Smaller dog breeds have naturally small bladders and may need to go even more. A Pekingese may not have the same bladder capabilities as a German Shepherd.

As you can imagine, young puppies can end up going countless times a day depending on their age. As they grow they’ll need to pee less and less, but in the early days, you shouldn’t expect them to hold it for long.

Your pup should have more control over their bladder by 5-6 months of age, though it may still vary depending on breed. That said, they’ll still probably need to go right after meals, drinks, or naps.

Outside of the usual bathroom schedule every couple of hours, some other behavioral elements may cause a puppy to urinate.

Puppies have tiny bladders that they have little control over. Too much excitement may cause them to lose it and pee right on the spot. They may urinate out of excitement when they’re happy to see you or having a ball playing around the house.

Getting them to the bathroom immediately after playtime or keeping a pad close by where they usually play is helpful for preventing accidents from overexcitement. 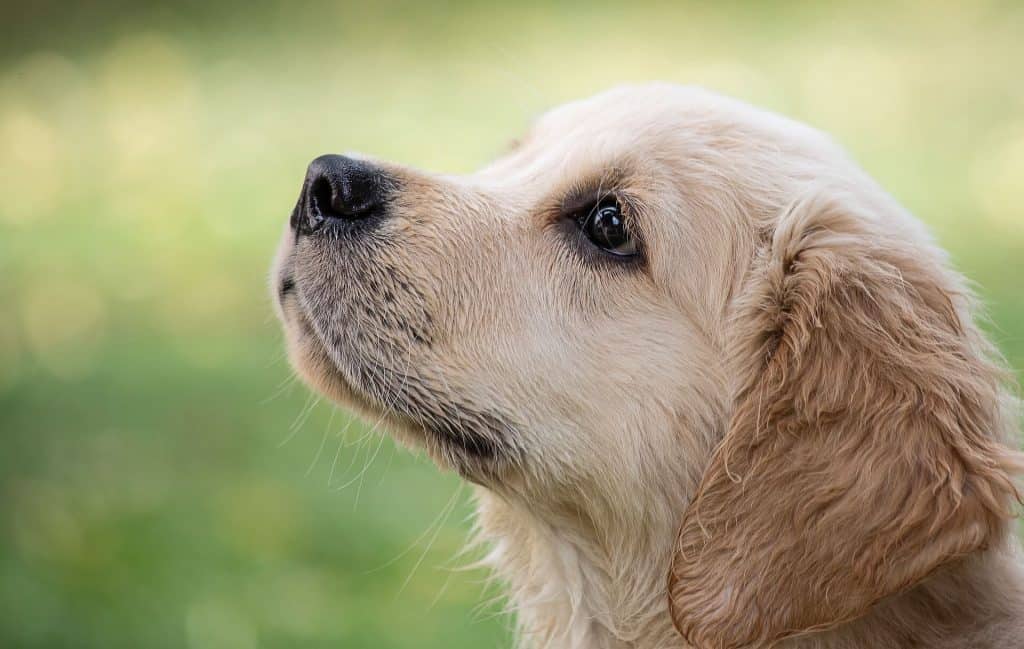 An overexcited puppy may easily lose control of their bladder, even if they’ve already gone recently.

A scared puppy may pee out of fear. Whether it’s harshly scolding or scaring them, a loud noise, or separation anxiety, puppies tend to lose control when they get scared.

Don’t get angry at your pup if they urinate out of fear. You will only make it worse.

If anxiety seems to be a constant issue with your pup, make sure you look into ways to manage it.

If your puppy notices that peeing is going to get your attention, they’re more likely to do it just to get playtime out of you.

To prevent this, make sure you’re spending plenty of time playing with them without them having to fight hard for your attention. If they have better ways to get your attention, they’ll do it.

Keep them occupied with walks, fun games, and one-on-one playtime to ensure your pup doesn’t feel the need to misbehave to get your attention.

Any time a puppy tanks up on water, they need to relieve themselves very soon after. If you’re not getting them to the bathroom on time, they may end up losing it where they’re at.

Puppies also need to relieve themselves very soon after waking up. They’ve been holding that tiny bladder in for longer than usual, after all.

Failing to get your pup to their designated bathroom spot on time can lead to an accident. Accidents can also happen while a puppy is still beginning potty training.

Keep in mind that your pup is going to need to go after tanking on water or sleeping regardless of the last time they peed. It’s not unusual for them to pee on their usual bathroom break and then need to go again in an hour after drinking, playing, or sleeping. 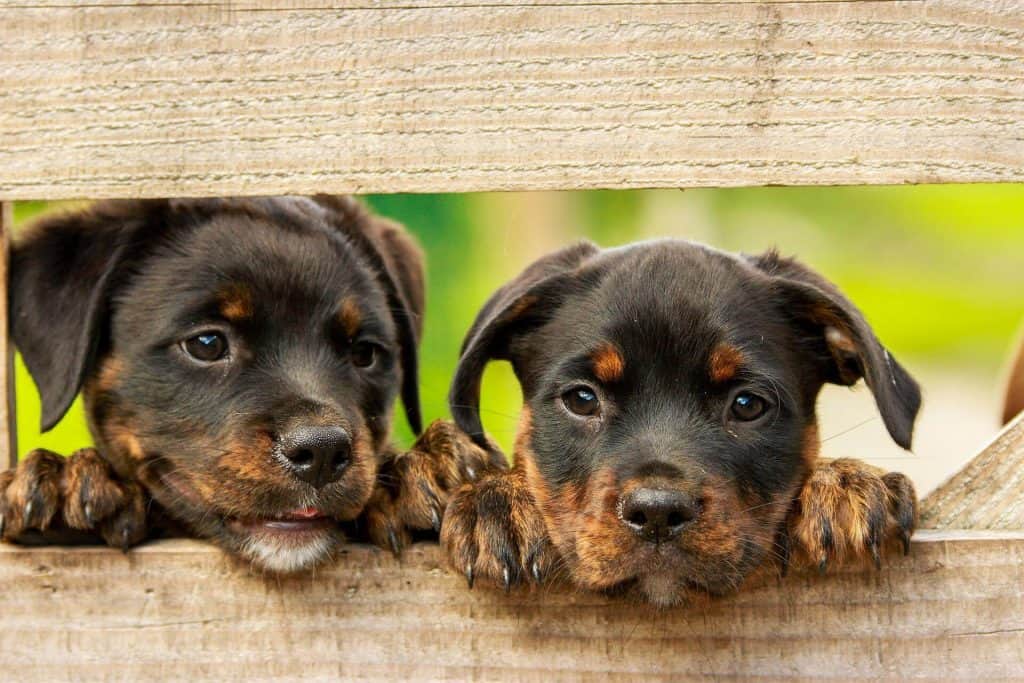 Puppies need to use the bathroom very soon after playing, drinking, or sleeping.

While peeing a lot isn’t necessarily an issue for young puppies, it is important to watch for any health issues and take them to the vet if you feel they’re getting sick.

You don’t want to take any risks, especially with puppies.

Urinary Tract Infections (UTIs) are a common cause of frequent urinating. Humans deal with it often too.

You can tell your pup has a UTI if you see blood in their urine or cloudy urine, or if they’re whimpering or straining to urinate. They may also lick around their private areas.

If your pup was doing well with their potty training and now they’re suddenly having accidents all over the place, they may have a UTI or a bladder infection. They can be treated at the vet with antibiotics.

We may not think about kidney stones in dogs, but they can happen. When they do happen, it’s important to see a vet to make sure they can pass it properly. Stones can cause obstruction and infections.

Kidney stones are more common in females and especially in toy breeds. They may cause bloody urine, frequent accidents, urinating in small amounts, or painful urination.

Kidney infections can arise from stones and cause your pup to need frequent bathroom trips. They can cause bloody or smelly urine, excessive thirst, and a fever.

Bladder stones are more common in dogs than kidney stones and can have severe consequences if not dealt with.

Dogs suffering from bladder stones may have bloody urine and they may strain to urinate. They may feel an urgent need to empty their bladder, but can’t.

If they are completely obstructed, they may have the opposite problem and not urinate at all. Obstruction can be life-threatening and painful, so make sure to get to the vet quickly if you’re worried that a stone is involved. 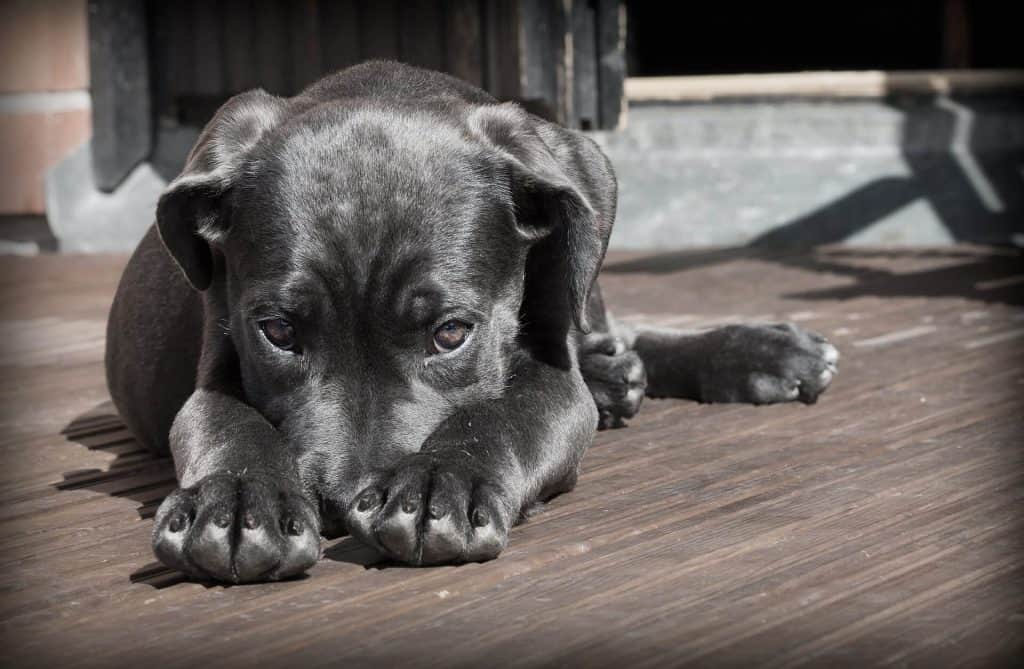 UTIs and kidney infections can cause frequent urinating as well as painful urination and blood in the urine.

You may not think about diabetes and dogs together, but they can get it just like people.

Diabetes occurs when the body can’t produce enough insulin or use it effectively, causing glucose to build up. A dog may have high blood sugar as a result, and their kidneys may end up overworking themselves trying to absorb and filter glucose.

A dog may be dealing with diabetes if they’re peeing in their sleep, drinking an excessive amount of water, and of course, urinating more often as a result.

Diabetes can be a serious problem that can strike early, so it’s important to visit the vet if you suspect your pup has it. While there’s no permanent cure for it, there are ways to manage the symptoms.

Certain medications may cause your puppy to pee even more than usual. As long as it’s a medication prescribed by your vet, they should tell you beforehand so you’re prepared. This is usually just a side effect and nothing to worry about.

Make sure you’re keeping track of all medications your pup is taking and their side effects. Only give your puppy what your veterinarian prescribes.

When to Call the Vet

It can be hard knowing when to call the vet because constant urination in a puppy isn’t that weird by itself. It’s their thing.

But if they’re suddenly consistently losing control every hour or two without any other environmental elements causing it, there may be something wrong. It can be especially alarming if they were getting potty training down perfectly before.

If they haven’t just tanked on water, woken up from a nap, or ran circles around the house, they generally shouldn’t be urinating every hour or multiple times an hour. 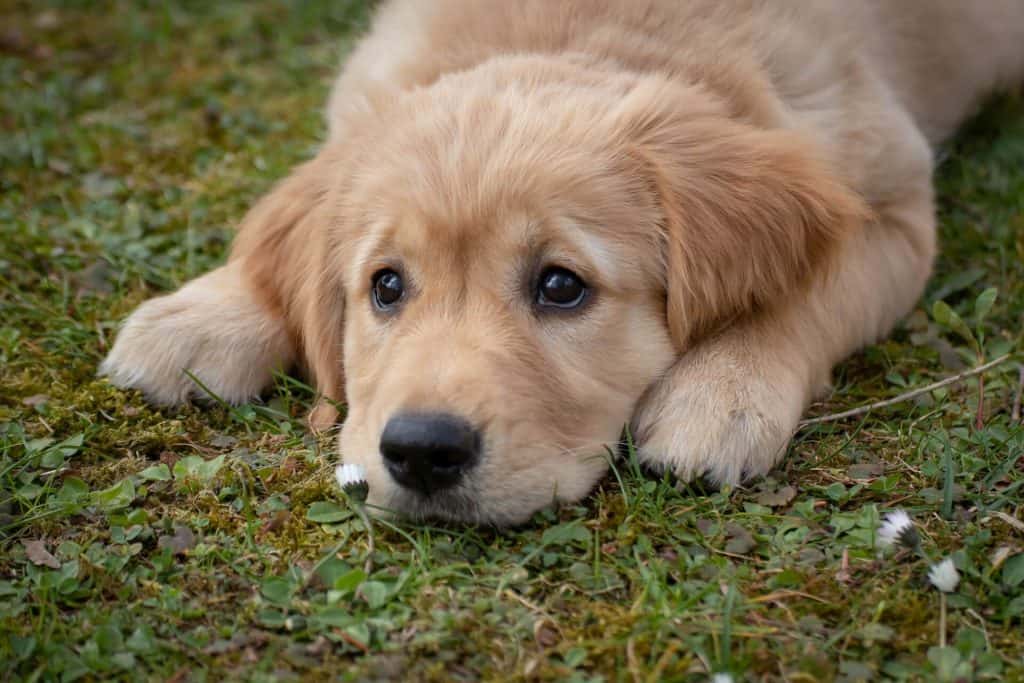 It’s important to call the vet if you suspect that your pup is peeing more than they should be.

You may also want to keep your puppy’s exact age in mind. If your puppy is getting close to 6 months old, they should have a bit more control of their bladder, so if they’re still going every hour, there may be a problem.

If they’re still only a few months old, it may not be as much of a concern, but you should still watch for any other signs of pain or sickness.

If you think they’re peeing too much, check where they’re urinating for any blood or foul smell. If you see any blood or discoloration, get to the vet ASAP. They will likely run urine tests and any other tests needed to determine if it’s a UTI, kidney infection, or something else.

Watch your puppy’s behavior as well. If they’re licking their privates excessively, drinking more than usual, or don’t seem as energetic as usual, you may want to take them to the vet.

A fever may also be a sign of a problem. If you can’t tell when your dog has a fever, you can check their temperature with a pet thermometer. 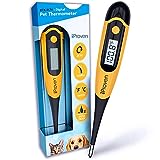 As a general rule, it’s always better to be safe than sorry. It’s important not to take risks with puppies, whose immune systems aren’t fully developed yet. If you think something is wrong, go ahead and call the vet. 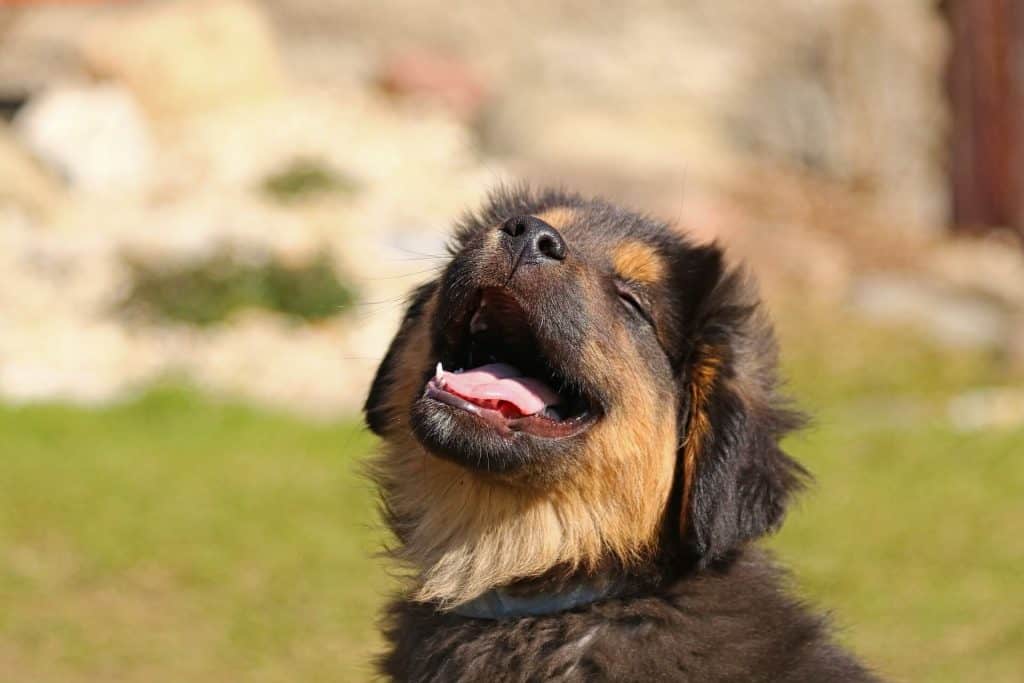 If your pup is peeing excessively, check their urine for blood or an odor and watch their behavior for any sign of pain.

Puppies have tiny bladders that can’t hold much until they’re about six months old, maybe a little older. Peeing several times a day is a natural occurrence for them.

If your two-month-old puppy seems to be urinating almost every other hour, you probably have nothing to worry about if everything else seems normal. That two-hour period already seemed like a lifetime ago to their current tiny bladder.

As your pup grows older, they should have to pee less and less frequently. If a six-month-old is still needing to go every hour or two, there may be a problem.

Check your pup’s urine for anything unusual like blood, discoloring, or a bad odor, and make sure to call the vet if you find anything off. Your pup may have a UTI or another infection that needs medications.

Also, watch your pup’s behavior. If they’re drinking more, seem to be in pain when urinating, or seem feverish, take them to the vet.

Peeing a lot is usually normal for puppies. Discomfort, blood, fevers, and excessive thirst are not. Watch your puppy’s behavior closely to ensure that their constant peeing is normal and not a cause for concern.