When introducing a new dog into your home, it’s always best to go about it slowly and cautiously. In many cases, dogs will hit it off from the get-go (in fact, you might even see them become fast friends).

However, in some instances, things can take an ugly turn. And what happens when one of the dogs is aggressive? Do you introduce them at the same time? Do you separate them? Or do you wait until they’re comfortable and feel safe before bringing another dog into their home?

The answer is not quite simple. If you have a pup at home that has past aggressive tendencies towards other dogs in the past, it can get a bit difficult for it around a new dog. It will most probably gnarl, growl, or maybe lunge at the new dog.

When that happens, you may not only have negative opinions about your dog but also about yourself. And it’s true; it doesn’t look good when you are invited to a dog party or a casual friend’s meetup, and your dog lunges at other dogs. But, with a few specific strategies in place, you can control things from going out of hand.

In this guide, we will share a few strategies proven to work while introducing two dogs when one is aggressive. 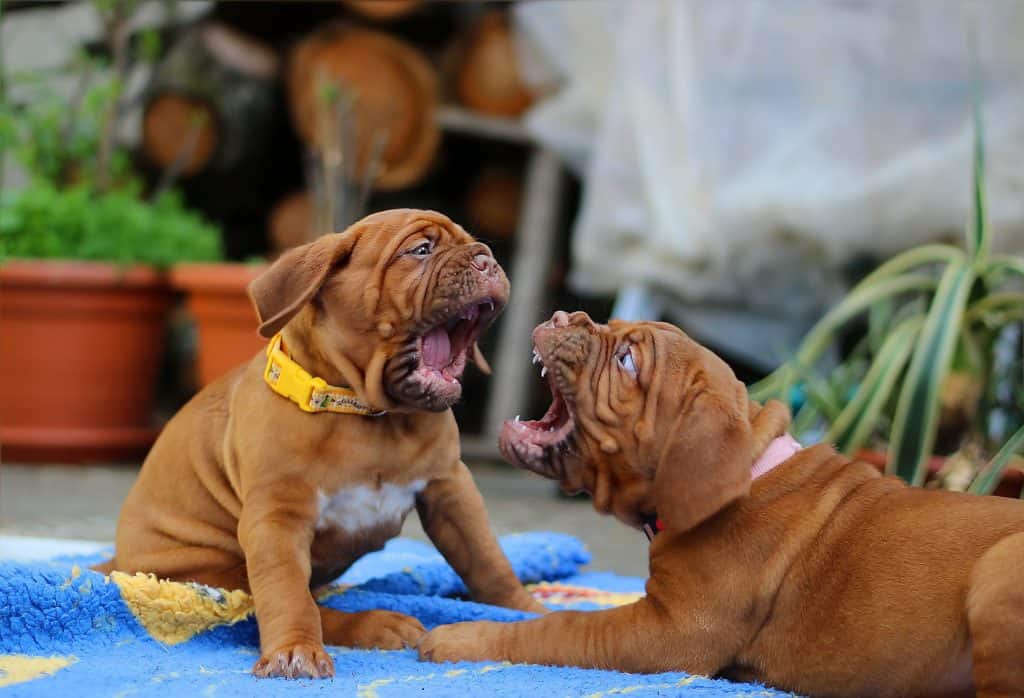 An aggressive dog at home may have difficulty adapting to a new dog if it has had aggressive tendencies in the past.

Should I Adopt a Second Dog if My Dog is Aggressive?

Before you even think about bringing a new dog into your home, you have to assess a few things.

You are a dog lover and want new fidos around. But, you hit the wall with your current dog, who isn’t precisely the socializing type. It reacts and lunges at other dogs as soon as they enter the house.

There is no need to worry, though; you aren’t the first owner to face the situation and most probably won’t be the last.

Following are a few questions you should ask yourself before bringing a new dog to the house.

As social as dogs are, there are slight misconceptions that they need constant companionship. But that’s not entirely the case with all dogs. They simply enjoy the company of their owners and don’t require much attention from other dogs or people, just like Chihuahuas, who are extremely possessive of their owners and don’t appreciate other dogs or strangers lurking around them.

If your dog is outgoing and social, he will likely get along with other dogs, though you should always keep an eye on any new dog in the family to ensure there are no issues.

If your dog is more introverted, he may not get along with other dogs and may even have issues with other dogs outside your home. That is common, especially in shelter dogs who develop a strong bond with their owners and don’t appreciate the inclusion of a second new dog in the family.

You can also use your dog’s behavior around other dogs to determine its personality. Dominant dogs are typically more outgoing and less fearful. Submissive dogs generally are shyer and more likely to cower. Following are a few different types of dog tolerance.

While many dogs are naturally friendly, others take some time to warm up to strangers. They will be a bit wary around them and will surely keep their guards up. Some dogs are more social than others, but no dog is truly antisocial.

If you have a social dog, chances are he’ll be happy to see anyone who comes to your house. Whether it’s a stranger or a familiar face, they can expect a wholesome greeting from your fido. He’ll probably be eager to greet guests and play with other dogs on walks, and there’s a strong chance he will be excited to see other friendly dogs.

If you’re looking for a dog that will be friendly with everyone he meets, then consider adopting one of these breeds:

A dog that is dog tolerant is not necessarily a dog who is friendly to all dogs. It might not be interested in interacting with other dogs or slightly indifferent towards them as long as they don’t breach its personal space.

This type of dog may be fine with other dogs — or not. But on the leash, it doesn’t bark, growl, or lunge at other dogs and appears relaxed and easy-going. It may show interest in other dogs — wagging its tail or moving toward them — even if it doesn’t play with them or make friends immediately.

Territorial behavior can be a sign that your dog is fearful or anxious. A territorial dog may be afraid of approaching people or other dogs because they perceive them as a threat to their territory or possessions.

This behavior is often seen in rescue dogs who have been abused or neglected by humans in their past life or have been replaced by other dogs. Like humans, dogs can sense if a new dog has replaced them, and as a result, a feeling of possessiveness ensues. They may have learned to view everyone as a potential threat and will react accordingly when they feel threatened by someone entering their space, especially dogs.

Aggressive dogs have a strong, innate desire to protect their territory and people. But, they often have no friends and rarely ever ease up around other fidos. Even if they do, they have strong instincts to guard, point and contact other animals (humans and canines). When these instincts are triggered, they often escalate quickly into a bite incident.

Dog Aggression modification is a challenging feat, especially for new owners who lack the experience in properly socializing their pups from an early stage of life. But all hope is not lost; with consistency and hard work, behavior change is possible and can be dealt with.

Dog-aggressive dogs need additional support, patience, and direction from their guardians to succeed in dog-dog interactions. 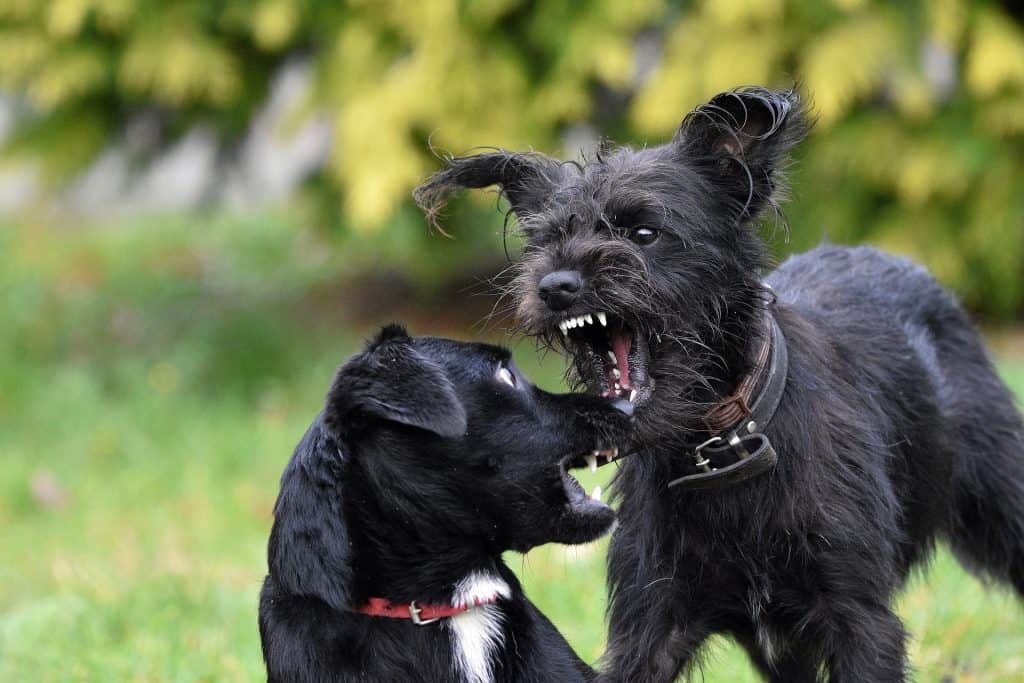 It’s challenging to modify dog aggression, especially for new owners who haven’t properly socialized their dogs from an early age.

When you’re ready to bring another dog into your home, it’s best to do so slowly and cautiously. Mainly space and distance help when introducing two dogs when one of them is aggressive. That will make both dogs feel more comfortable and the new one safe in its new environment.

The following steps will help you to introduce dogs successfully into your home.

Set Rules From The Start

When introducing your new dog to your current dog, you need to set some rules from the start. It is essential that both dogs know what to expect and what is expected of them. You can use verbal commands, hand signals, or even treats to help your dogs understand.

Rules can range from “no licking” to “no growling.” Make sure your dogs know what they are. You can use verbal commands, hand signals, or even treats to help your dogs understand.

If at any point in the process either dog starts exhibiting aggressive behavior towards the other dog, then stop the action immediately by using a loud noise such as a whistle or yelling “No!” and separate them immediately by putting them in another room or crate until they calm down. 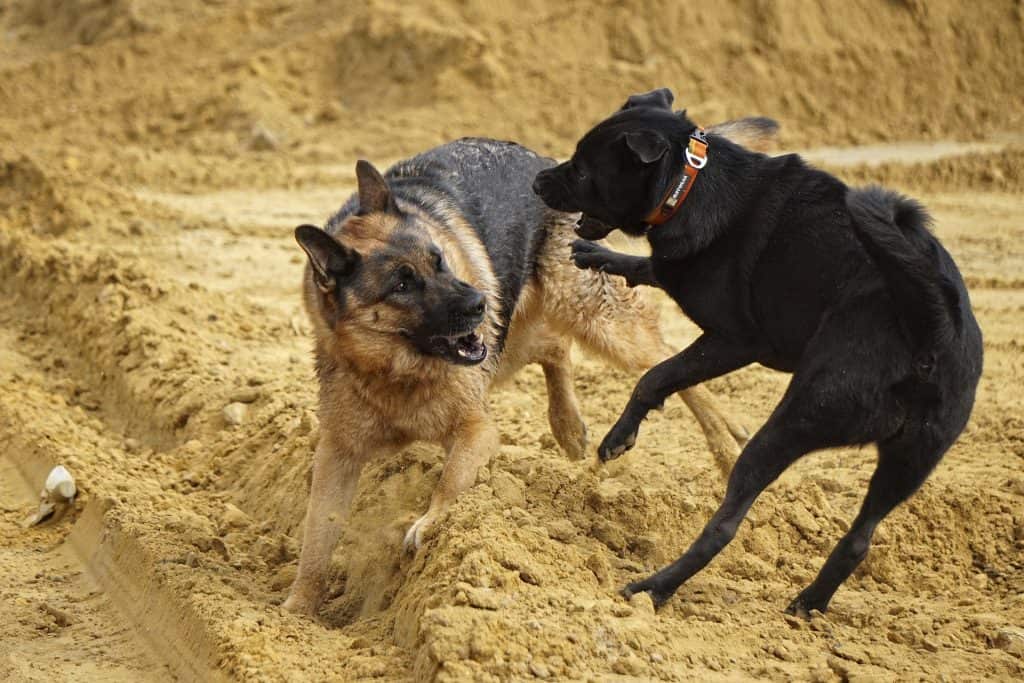 It is important to establish some rules from the start when introducing your new dog to your current dog.

Start With One Dog on a Leash

One of the best ways to get your dogs to get along is by bringing them together on a leash. That gives each dog a chance to sniff and get used to the other dog’s scent. It also lets both dogs know they must behave around the other dog.

When you bring one dog into your home with another on a leash, ensure they each have their own space. Don’t let them get too close to each other until they have time to sniff and get used to each other’s scents.

Walk Both Dogs Together

The first thing you need to do is get both dogs comfortable with each other on a leash. That can be done in the house, where there is less danger of them getting into trouble.

If one dog is more aggressive than the other, keep them separated until you are sure that they will be able to get along. If you are walking two small dogs together, it may take a while for them to get used to each other.

Once your dogs are comfortable with each other on a leash, take them for a walk together. Choose a place free of unnecessary distractions like traffic and neighborhood dogs that could potentially disturb the aggressive dog. Hold their leashes so they are at a safe distance from each other and can get used to each other’s walking and personalities.

If they seem interested in one another, slowly move closer until they are side by side or even walking next to each other if they seem comfortable enough (it might take some time).

If things go well and they are comfortable with being next to each other, try taking them off leash! The goal is for them not only to be able to walk together but also play together!

After the walk, bring both dogs inside. They should still have their leashes, so they are at a safe distance from each other. Let them get used to each other’s scents inside the house. If they seem curious about each other, let them sniff at each other’s faces through the leash without pulling it tight. If one dog seems afraid of the other or tries to show dominance by mounting the other, separate them immediately and try again later.

Once they seem comfortable with being near each other in a non-threatening situation, slowly move closer together while keeping your attention focused on both dogs at once. If they seem calm and relaxed while you are doing this, continue until they are within two feet of one another (or less if there is any sign of stress).

Watch For Signs of Tension

You can’t expect your dogs to become best friends right away. It takes time and patience.

The first time you let your dogs meet, the goal is for them to smell each other and get a feel for the other dog’s scent. When introducing them, don’t force them together or push them into contact if they don’t seem interested in doing so on their own.

If one dog starts acting aggressively toward another, take them back inside and try again later. If you see signs of tension, like one dog growling or one dog staying as far away from the other dog as possible, you need to backtrack. Let both dogs walk away and try the introduction process over again.

If you find yourself in a situation where you need to introduce a new dog into your home, take things slow. It’s not as simple as one might think. Dogs who grow up together in the same household can sometimes become aggressive towards each other, especially if they are males. The simple steps mentioned above will help the process go more smoothly and lead to two loving dogs that enjoy each other’s company.