We are not going to lie; dog-to-dog aggression can be a bit embarrassing, especially when strolling around the park or having a friendly neighborhood talk. It showcases a lack of discipline and, yes, can be a bit reflective of the owner’s training. But, we all know that a friendly dog suddenly showing aggression has nothing to do with training. There could be a number of reasons for it – one strong one being boundaries!

In general, however, an aggressive dog can be problematic for owners. They can’t let them out. Nor can they take it out on a run or a walk. There is always this feeling in the back of the head that something might go wrong. They might attack another dog or could get injured. Or worse, get taken away by animal control.

Well, you are not alone. It’s not uncommon, and owners experience this once or twice in their pets’ lives. But how do you manage the situation and ensure this doesn’t happen again? It’s actually simple – training and hard work.

There is no shortcut to a pup’s behavior and aggression. Like children, they need to be cared for properly and steadily. For example, a German Shepherd rarely shows aggression if appropriately trained. But, if there is no proper socialization and it faces an unforeseen situation, the end result will be pretty much obvious.

Luckily, nowadays, there are many tricks and techniques dogs respond positively to, and in this guide, we will be sharing a few that can significantly impact your fido’s behavior. 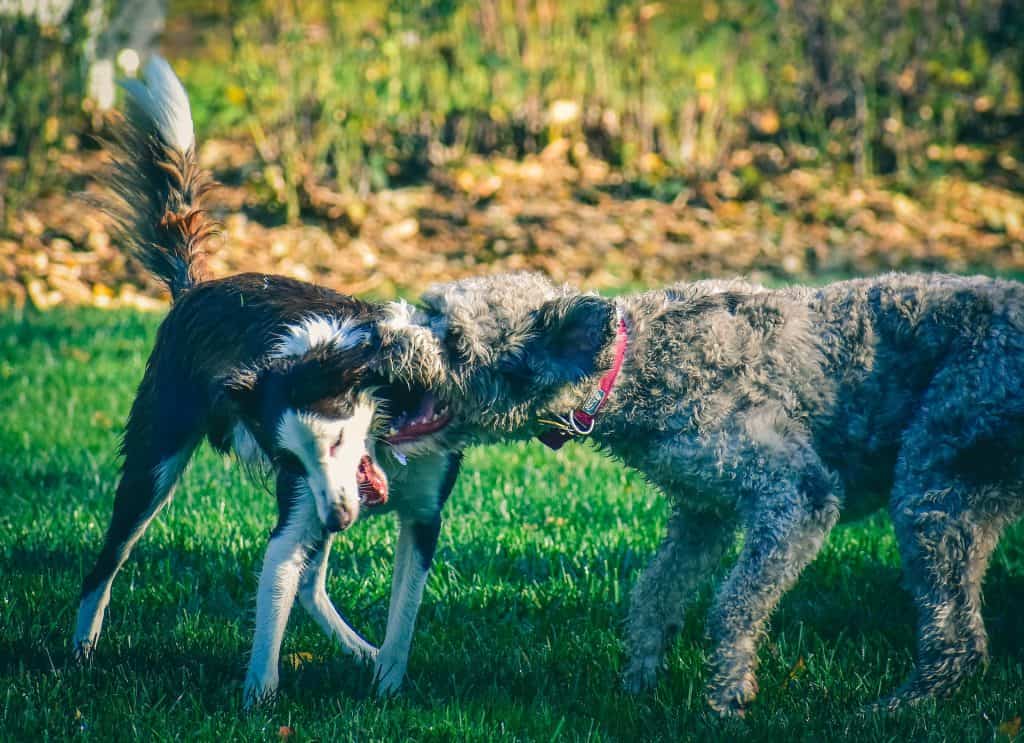 It is important to understand and acknowledge the different types of aggression in dogs to stop and modify aggressive behavior.

What Are the Different Types of Aggression in Dogs?

There are many types of dog aggression; the key to stopping and modifying aggressive behavior is understanding and acknowledging it. Below is one of the most common types of aggression exhibited by dogs that can help you manage your dog a bit more easily.

Territorial aggression, as the name indicates, is directed towards anyone, dog, human, or any other animal that invades your pup’s personal “territory.” The boundary, mainly, is marked around the house or the yard where it likes to spend most of its time.

The reason it’s the most common form of aggression is because a number of strangers come and go to your house daily. While your dog grows habitual to most of them, it still does react to the new ones unless adequately socialized from a young age.

This form of aggression comes into play when your dog feels threatened by someone or any other dog that comes close to their most valued things. It could be their owner, as in the case of Chihuahuas, who are extremely possessive of their owner. Or it could very well be a toy.

A dog mainly manifests frustration-aggression if kept on a leash or confined to a small space for too long. Primarily, the reason is overexcitement, and when it doesn’t receive the treatment it deserves, it gets frustrated and manifests these emotions as barking, growling, and lunging.

Dogs with a high prey drive are more prone to this form of aggression. For example, wolf hybrids have a strong and high prey drive. They can’t be kept around small furry animals or other small dogs, as they will most likely try to hunt them.

This predatory chain of instinct always comes into play around small animals who try to run around such dogs. Even a small game of chase can trigger the predatory response, and your dog is most likely to follow its instinct.

But, almost every dog has a prey drive, whether high or low and as long as it’s kept within means and not directed towards children or other pet animals, you have nothing to worry about.

Almost every type of aggression listed above except the predatory form roots in fear or anxiety. There is no doubt that dogs cannot express themselves intelligently, and their only mode of communication is barking if it’s threatened. If the going gets tough, the behavior grows a bit more offensive, and there’s a strong chance your dog might growl, lunge, or even bite.

The best way to address this aggression type is by providing comfort and removing your pup from the stressful situation. Help them gain confidence by practicing self-control and get in touch with a professional trainer if necessary. 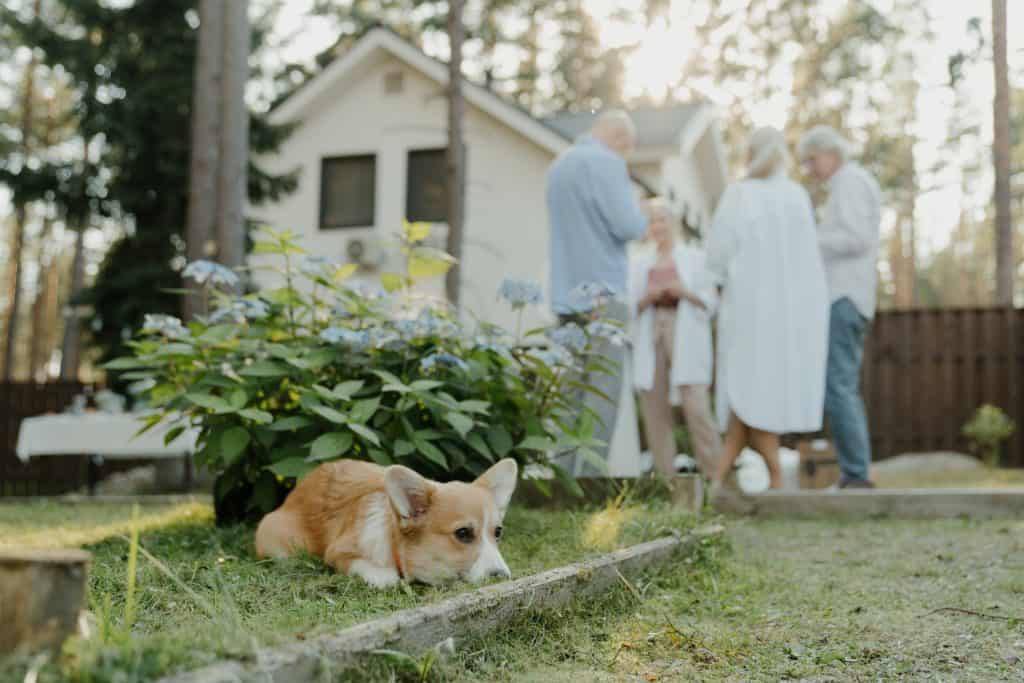 If necessary, work with a professional trainer to help your dog gain confidence.

How to Stop Dog Aggression Towards Other Dogs

Obviously, there is no treatment option available for dog-to-dog aggression unless the root cause is an underlying health condition. Behavior modification, sensitization to other dogs, and eliminating the underlying fear or stress around dogs are the gateway to a better and well-rounded pup.

Desensitization has been a proven procedure to end uncalled aggression towards other dogs. It basically requires the gradual exposure of a dog to the trigger and present the trigger in such a way that it no longer influences your pup’s daily mood.

Whether it’s fear, anxiety, or a stranger your pup doesn’t like, slowly introducing it to these new stimuli can surely help it overcome its endeavors. The goal is to normalize the change in its life so it doesn’t react strangely whenever a new dog or a stranger comes along.

So now as you understand the basic concept behind desensitization, it’s time you know how you can desensitize your pup to other neighborhood dogs.

Now, as you have a rough idea of desensitization, it’s time to move on to the next step, and that’s the bread and butter of the entire process. Desensitization and counter-conditioning go hand-in-hand. The former eases your fido around other dogs, but the latter encourages them to socialize with them.

Your pup’s anger or aggressiveness around other dogs is primarily due to their negative experiences. But, if you replace them with positive ones, those negative feelings fade away gradually. Your pup will be more at ease around other canines, and that’s basically counter-conditioning.

That may sound complicated, but in fact, it’s not. There are many ways to start, but positive reinforcement works like a charm when desensitizing your pup or encouraging new activity.

Whenever your dog comes across a new friendly fido and maintains the decorum, reward it with its favorite treat. That will come off as encouraging, and after a few hits and misses, it will get a hold of the routine. Dogs love their treats and will surely keep a cool head to get them.

As a dog owner, you are responsible for the safety of everyone around you and, foremost, your own pet. But, an aggressive attitude of a dog toward others could cause accidents and injuries.

As we discussed earlier, your pup is more likely to react negatively to unforeseen situations than towards the ones it’s mostly expecting. If you are on a walk in a familiar neighborhood around familiar dogs, your dog is less likely to react to them. It will be calmer as it’s not anticipating any unfamiliar situation in terms of play or confrontation.

But, if the situation is changed and a nearby dog starts barking at it, obviously, a fearful dog who is already going through a behavior modification will follow suit. That’s the reason you should begin to walk your mutt in neutral environments that are familiar and create less distress for your canine.

As a dog already in quite a lot of distress, it’s not advisable to socialize much with other dogs, especially if there’s been a recent episode of aggression. But, still, if you think your dog is okay for a friendly meetup, do it around familiar dogs, and even with them, keep it short.

After a friendly meetup with one or two dogs, most owners immediately decide to go to dog parks. While there is nothing wrong with that, if your dog is at a place where it’s not intimidated by other friendly dogs, this might not be a very good idea for a dog that’s still on edge.

During the meetups, however, after a few minutes, you must divert its attention towards yourself. Positive interrupts are not only functional around dogs but are also quite beneficial to human interactions.

The play is to divert your dog’s attention at the right time before it obsesses over other dogs. And, to do that, you must keep a few treats around. You might not be able to distract it with your voice, but the smell of their favorite treat? They can’t ignore that, of course.

So, to keep your dog tamed and happy, do try to keep these sessions short. 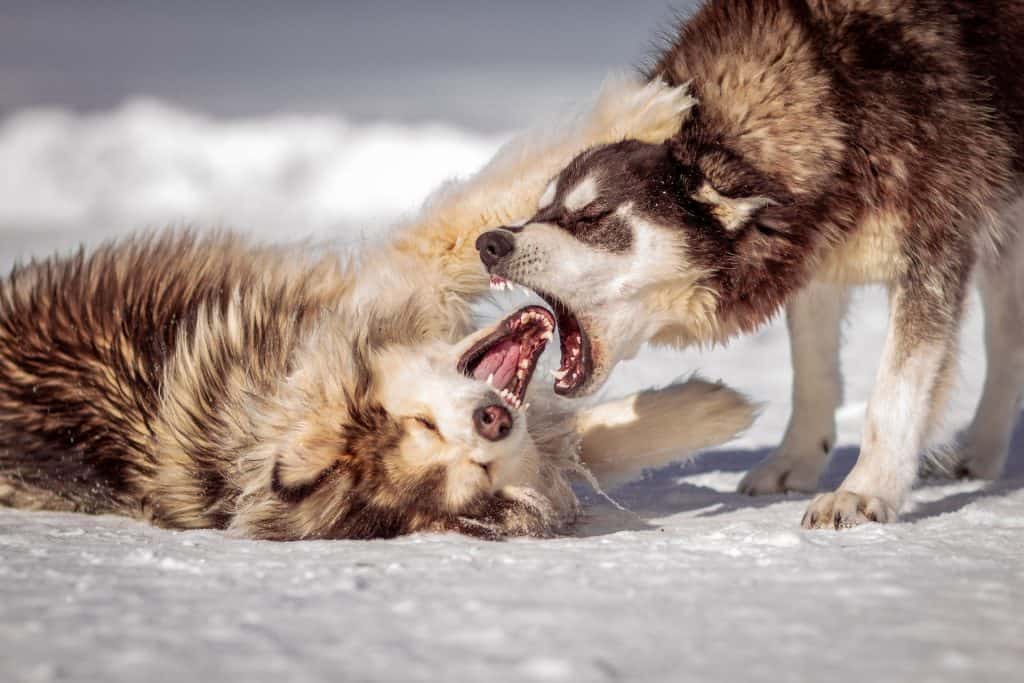 However, when you meet up with your dog, you must divert his attention towards you after a few minutes.

Create Space or Block the Other Dog

It’s one of the most proven strategies to avoid dog-to-dog aggression, and it simply involves blocking the view. If your dog can’t see or get close to another dog, there will be no unnecessary aggression from both parties.

There are several ways to implement this step. As soon as you notice a dog passing by, you can change your direction or slow down and develop some distance between the two. The best strategy, however, is to block its view. Try standing behind a car, or if there is no suitable barrier around, you can try blocking the view with your body.

Many trainers and dog experts don’t recommend turning back as soon as you see a dog coming around. There are two significant flaws in that – one being diverting your dog’s attention. If you suddenly change directions seeing a dog, your dog will immediately sense it as a threat, and there is a sure guarantee it will constantly look back until satisfied.

The second is if your dog is filled with other neighborhood dogs, you can’t possibly outrun them all. The best solution is to simply create space. If there is enough space between your pup and the others, there is a good chance even if an encounter happens; your dog will not react. 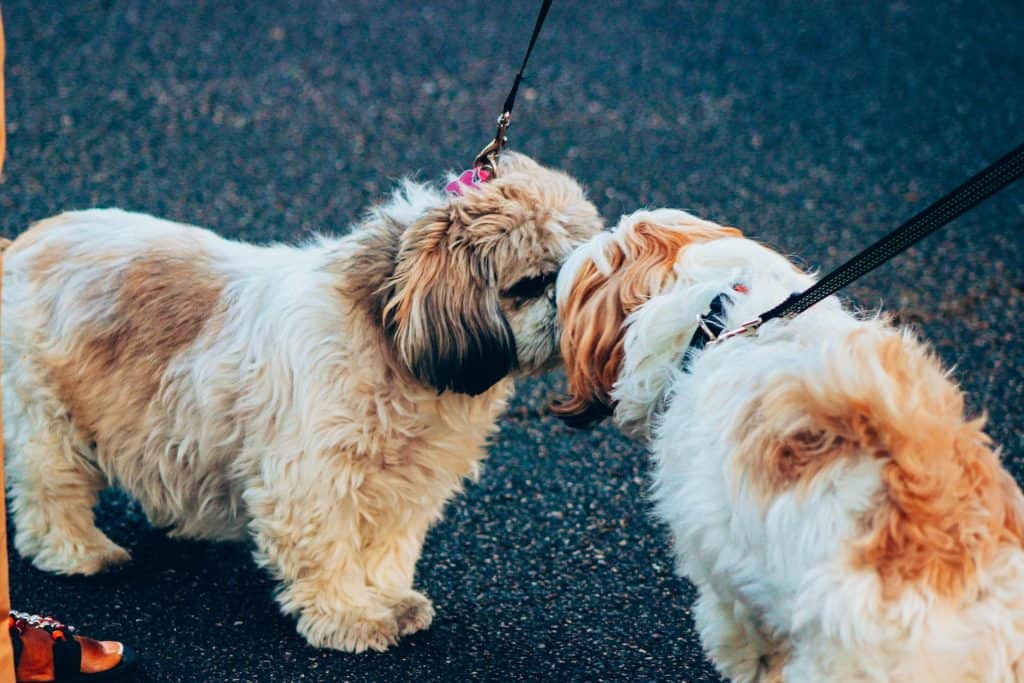 A little guidance can go a long way in keeping your dog calm and preventing accidents from happening.

Dog-to-dog aggression can be a bit overwhelming for owners, especially new ones. It’s tough work and requires patience and perseverance. But, with the proper guidance, you can help your dog stay calm and avoid unnecessary accidents and injuries.