There is a certain allure that wolf-dogs possess. Their majestic build, wild eyes, and dignified presence attract owners from all walks of life. And is likely the reason these types of dogs have grown in popularity over the last few decades.

But these canine chimeras aren’t without controversy. Some see these magnificent beasts as just another breed of dog, while others believe them to be every bit as wild and unpredictable as their pure-bred wolf forebears. Begging the question of whether these animals make good pets or whether they should even be kept as pets at all.

Before you consider getting a wolf hybrid you need to understand what exactly wolf-dogs are, what they will require of you as an owner, and where these beautiful animals come from.

What is a Wolf Hybrid?

Strictly speaking, a wolf cross is any canine that has a pure wolf predecessor in its traceable lineage.

Many of the original wolf-dogs available for sale were 50/50 crosses between a purebred wolf and a dog. Today it is more common to have litters from two hybrids or from a hybrid and a dog. The more pure wolf a hybrid has in its line, the more expensive they usually are. 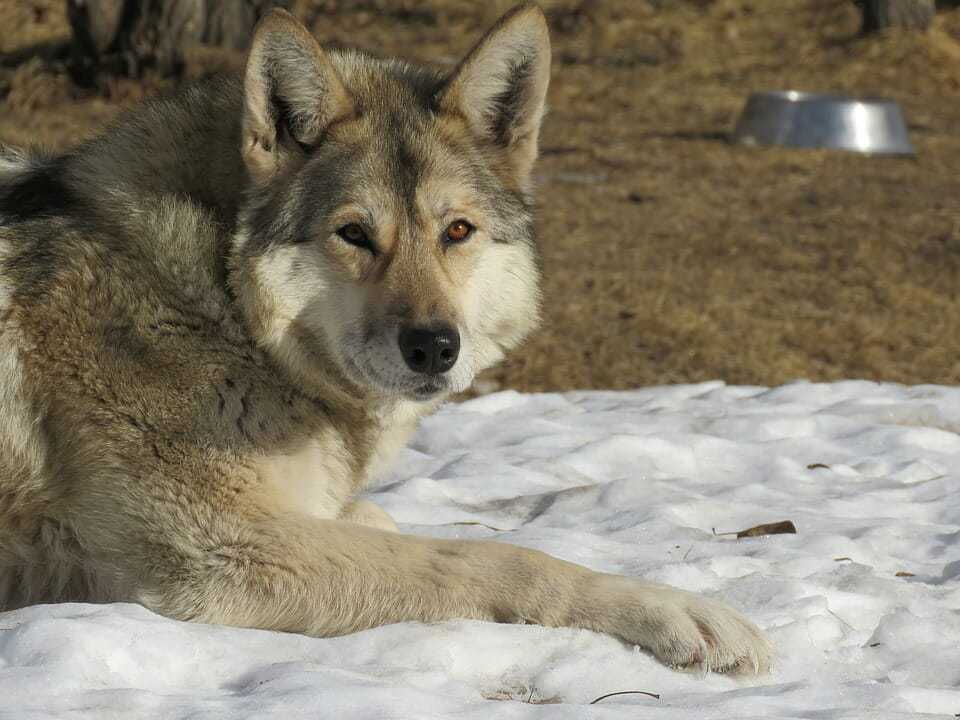 Wolf-dogs vary in physical appearance based on the type of wolf and type of dog used in the crossing. Most of these dogs found in homes today are only a very small percent wolf.

The most common dog breeds used in hybrid crosses are malamutes and huskies, though many large dog breeds have been used. The type of wolf used can also vary, with gray, timber, and arctic wolves being the most common.

Because wolves and dogs are so closely related, their hybrid offspring remain fertile. Meaning, they can be back-crossed with wolves, other hybrids, or dogs, to create a litter that is more or less wolf-like. However, it is impossible to know how the DNA of the two parents will interact to create a pup. Some puppies from a direct wolf-dog cross may act more like wolves while others act mostly like dogs, and still others show a good balance between both parents.

Different people tend to have different answers when it comes to whether or not wolf crosses make good pets. And that has a lot to do with the variability in litters that we just discussed above. A wolf-dog that has mostly dog characteristics is likely to make a fine pet for the right owner. While a hybrid that has a lot of wolf traits may be a challenge for even the most experienced dog owner. 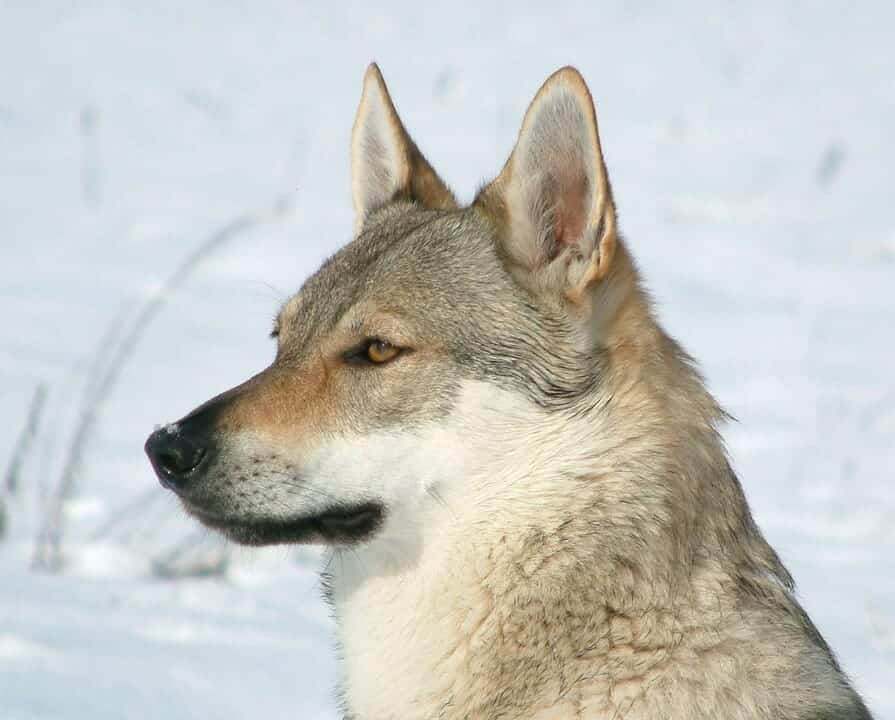 Wild canids are built to travel great distances in search of food. Wolf-dogs retain these same instincts, which can often lead to problems in a domestic environment.

If you’re considering a wolf-dog, you need to prepare for the possibility that your new pet may be more wild animal than loyal companion. Even if you do luck out and end up with a beautiful, majestic looking wolf hybrid that acts like a lap dog, they are still likely to retain some of their wolfy traits.

Pros of Owning a Wolf Hybrid

There is a reason wolf-dogs persist despite how difficult they can be to own. Here are some of the reasons people are attracted to hybrids. 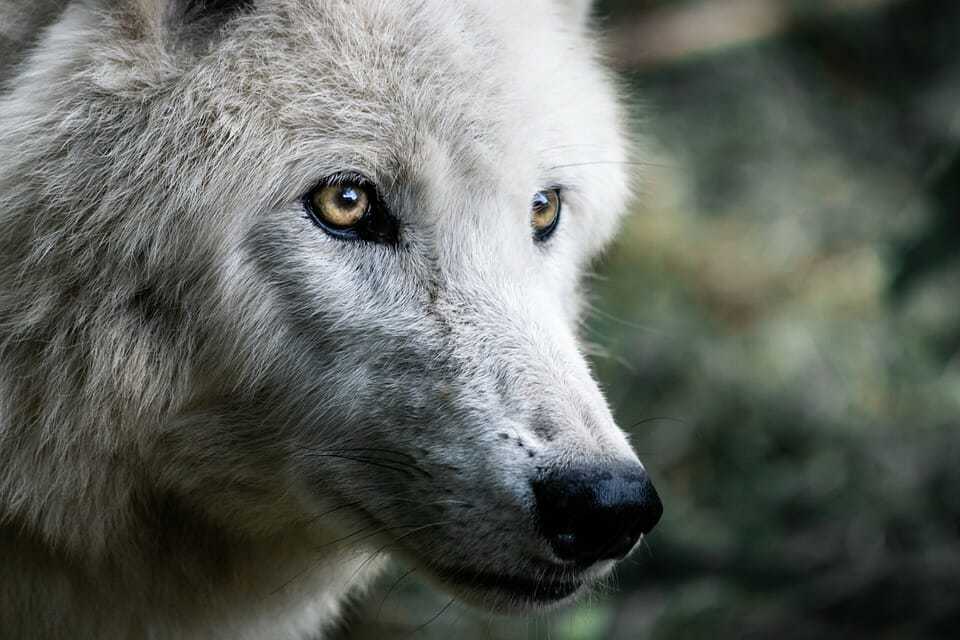 The appeal of wolves is not hard to see. They are beautiful, graceful, and mysterious creatures. It’s no wonder humans sought them out as companions early on in history and continue to do so today.

Cons of Owning a Wolf Hybrid

Despite their beauty and charm, it’s important to remember that these animals are part wild animal, and no matter how well you socialize or train them, that will never change. Here are some downfalls of the wolf-dog you should consider before committing to one.

Watch the video above to learn more about what makes this primitive dog so difficult to own.

What to Consider Before Getting a Wolf-Dog

There are plenty of wolf-dog owners out there who have no regrets about their pet. But there are just as many who ended up having to give their hybrid up or worse because they were ill-prepared for what they were buying.

Before you get a wolf-dog, there are a few things you must consider.

First, and most importantly, you need to look into your local laws. Many states consider wolf-dogs to be wild animals, requiring a special permit in order to own one. Even states that consider hybrids dogs often have city and county laws dictating whether or not you can own one where you live.

If your state doesn’t consider a wolf-dog a dog, then there can be some serious implications even if you do get the right permits. The biggest issue has to do with the rabies vaccine. Because canine vaccines aren’t approved for wild canids, your hybrid could be euthanized if they bite someone, even if they are fully vaccinated. 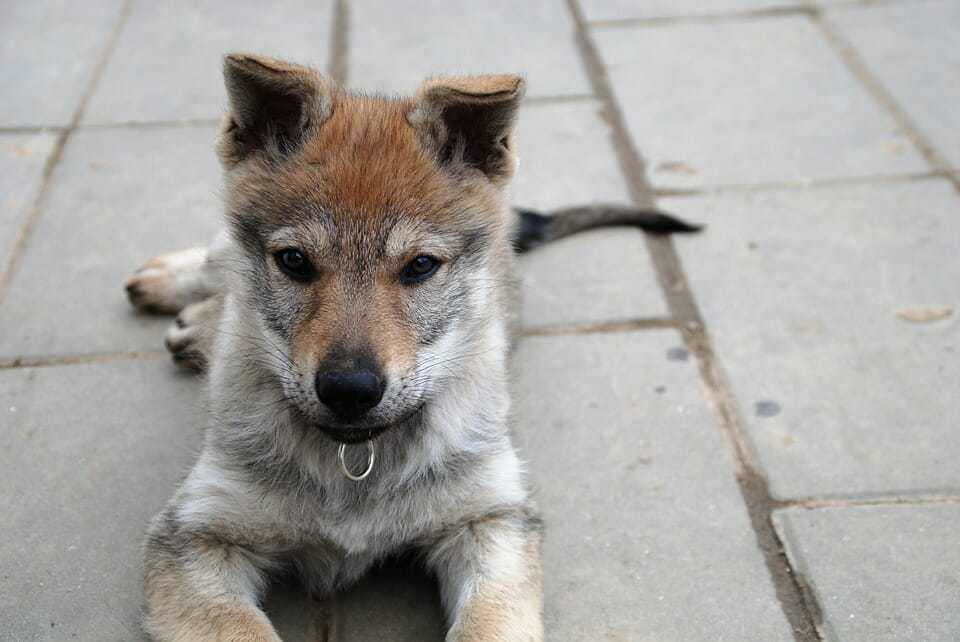 Wolves mature more slowly than domestic dogs, yet the socialization period for puppies is much shorter. Both of these facts lead to challenges for owners of wolf-dogs.

With this in mind, the second biggest thing to consider is containment. A wolf-dog at large is at a much greater risk of being euthanized than a normal dog. If your municipality doesn’t allow these pets, you may not have the option of getting your dog back if animal control picks them up. And since they wouldn’t legally be allowed to be adopted out, the worst is likely to happen.

Unfortunately, this is the fate of too many wolf-dogs in America.

To keep your hybrid safe, you will need a fully fenced yard. Not even six-foot privacy fences are enough to keep some of these dogs in, especially if there are trees or other things to climb up or propel off of. Since wolves are highly energetic, intelligent animals, locking your wolf-dog in a kennel all day isn’t likely to end well either. These animals do best in large yards with extra-high fencing.

Because wolves are pack animals, they can get lonely easily. They do well with other large dogs and require at least one for companionship. But they will also need a lot of attention and activity from you. A short walk won’t be enough for them, so don’t even consider one of these for a pet unless you can commit to long hikes or other active outings at least a few times a week.

No dog should be left unattended with a child, but hybrids can be especially dangerous due to their skittish nature and powerful physique. They are not a good option for homes with infants or young children. Even with proper socialization, they often cannot be trusted with small pets or livestock. 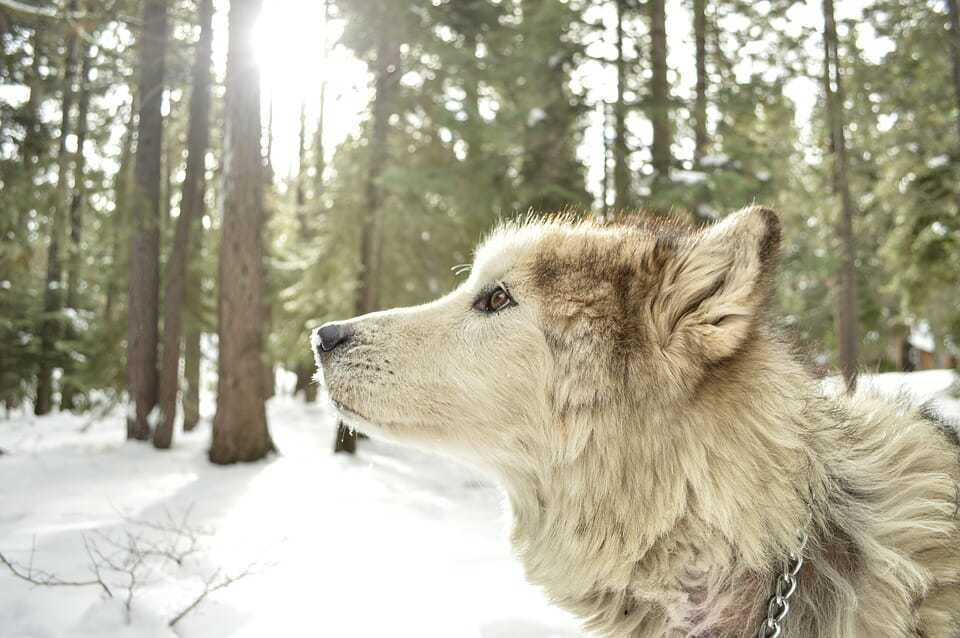 If you are dying to own a wolf, but are now realizing you may not have the right lifestyle for it, why not get a wolf-look-a-like instead? Many northern breeds and mixes are indistinguishable from a true wolf-dog.

Where Do Wolf Hybrids Come From?

One final thing to consider before getting a wolf cross is where these animals typically come from.

An argument can be made that if an animal is part dog, then it can be treated as a domestic pet. But, at some point, a pure-bred, wild-at-heart wolf was needed for the breeding of these animals. Wolves, even those bred and raised in captivity, are still not pets. They have deep-rooted instincts that drive their behavior and make them a poor fit for the typical domestic situation.

And, unfortunately, most of the wolves used to create wolf-dogs aren’t just subjected to “typical” dog ownership. More often than not, they are kept in secure kennels with little room or opportunity to practice their natural behaviors. Even if the breeder’s intentions are good, the temperament of a pure-bred wolf dictates this kind of incarceration, especially if the owner’s main use for it is as breeding stock. 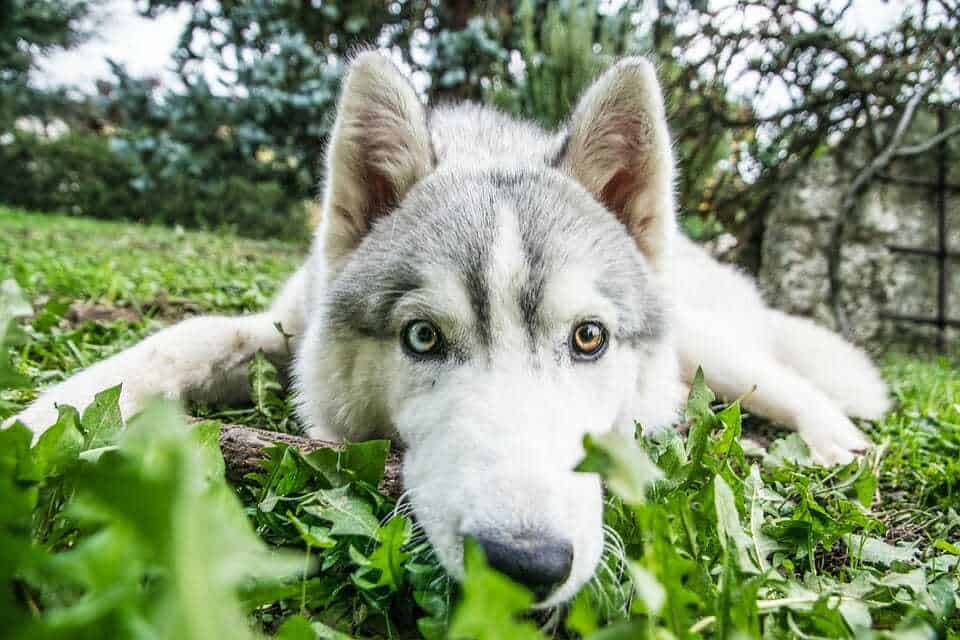 Wolf, hybrid, or just a husky? It can be hard to tell the difference between these types of dogs, and that’s something many unethical breeders count on.

Another problem that crops up in the wolf-dog market is the sale of crossbreeds that resemble wolves but don’t actually have any wolf blood.

Hybrids can be a profitable niche for breeders. And, since all crosses look a little different, it’s easy to pass off a malamute mix litter as a part wolf and sell them for a few thousand dollars each. When, in reality, they are just mixed breed dogs that would normally be given away for free.

If you wouldn’t knowingly buy a dog from a puppy mill, then you may want to think twice before buying a wolf-dog. But that doesn’t mean your dream of owning one of these extraordinary dogs is dead.

Because they are so difficult to keep, hybrids frequently end up with wolf-dog rescue groups. The wolfiest among them are often placed in sanctuaries where they have space and ability to let their wolfy instincts out. But those that have a lot of doggy traits can be adopted out to the right home.

Do you still want to bring a hybrid into your life? If you believe you have the right home and lifestyle to give one of these unique canine chimeras the special kind of attention they require, consider reaching out to your local wolf-dog rescue today. 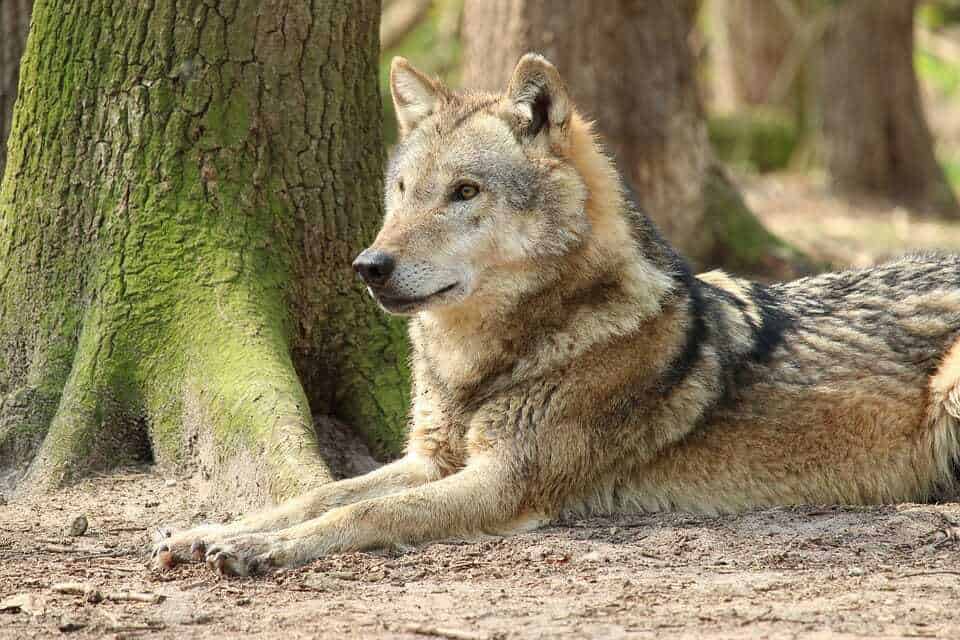 Wolf-dog rescues work to place shy and fearful dogs in sanctuaries while adopting out candidates that will make better pets. If you have the right lifestyle and knowledge to own one of these majestic animals, why not save a life by adopting instead of buying?

Do you enjoy independent or challenging breeds but aren’t sure if a wolf-dog is right for you? Check out these Ultimate Breed Guides to find the right canine for your lifestyle. 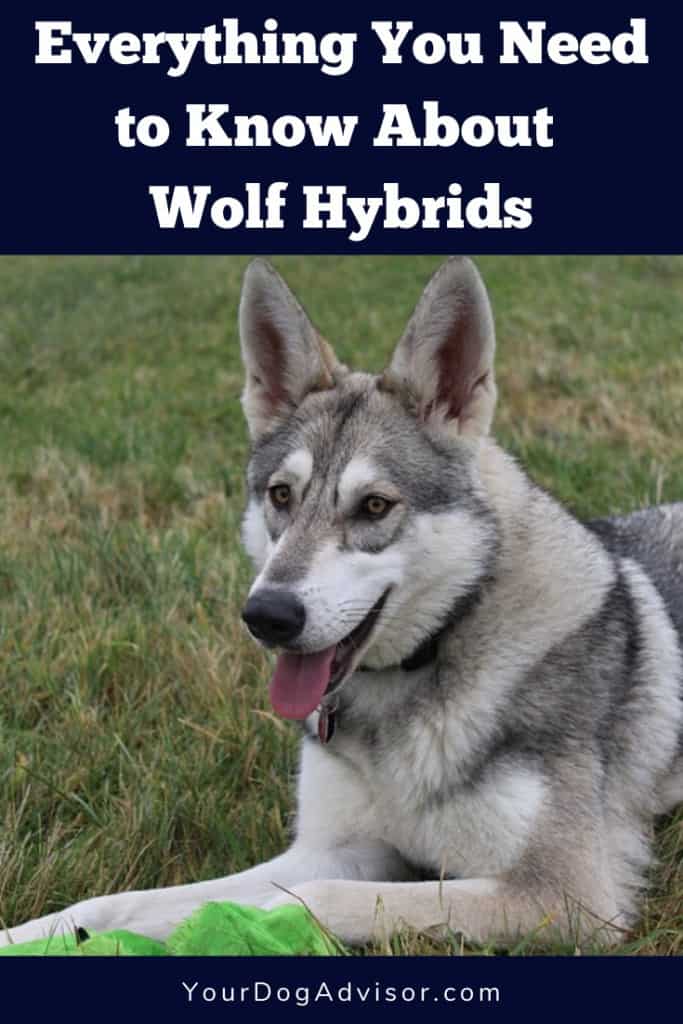