Anyone who has ever cared for a dog with atopic dermatitis knows how heartbreaking and frustrating the condition can be. Also known as canine eczema, it manifests as severe itchiness accompanied by red, irritated, inflamed skin. Severely affected dogs will often bite, chew, rub and lick these itchy areas incessantly, sometimes until they bleed. What’s more, until recently, there were very few treatment options that could offer the dog much relief without also causing a barrage of unwanted and side effects. 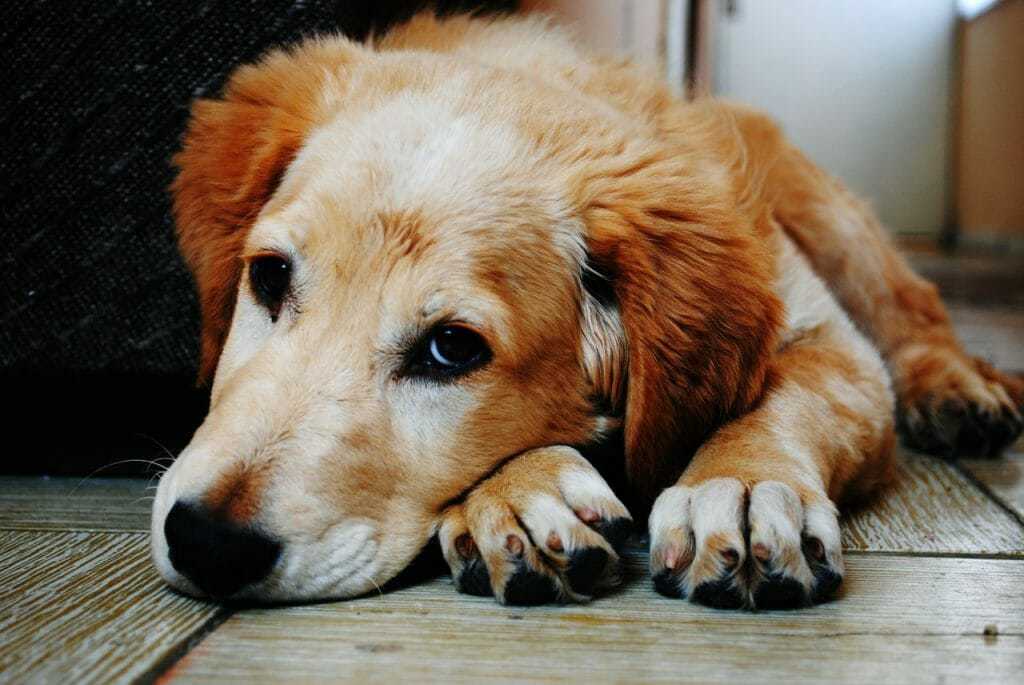 Then, in late January 2014, the French pharmaceutical company Zoetis launched a new drug, with the trade name Apoquel (oclacitinib maleate). Billed as a “novel therapy” for the treatment of dogs with allergic dermatitis and/or atopic dermatitis, the drug targets the Janus kinase pathway, which is directly involved in the inflammatory response that causes itching. Early clinical trials showed the drug to be remarkably effective in reducing or completely eliminating the symptoms of atopic dermatitis, sometimes as soon as 24 to 48 hours after the first dose.

Since then, Apoquel has become a staple in veterinary medicine for treating dogs with dermatitis associated with allergies and/or eczema. Disturbingly, however, after-market studies of the drug’s long-term safety and efficacy are scarce. And there is disagreement among veterinary professionals as to whether or not the medicine is safe for long-term use.

How Does Apoquel Work?

Apoquel is a JK-1 inhibitor, a type of immunosuppressant drug. In some ways, it is similar to the corticosteroids prednisone and prednisolone. But unlike steroids, it targets specific mechanisms in the inflammatory response. Its method of action closely resembles that of the drug Xeljanz (tofacitinib), a JK-1 inhibitor used to treat rheumatoid arthritis and psoriatic arthritis in humans.

According to data compiled by Zoetis, Apoquel performed significantly better than a placebo in clinical trials. In one 30-day placebo-controlled study involving 436 dogs across 26 veterinary clinics throughout the United States, 67 percent of dogs in the Apoquel group had resolution of their symptoms, while 29 percent of dogs receiving a placebo improved. The reduction of symptoms was greatest during the first seven days of therapy and leveled off after that.

Apoquel also performed better than prednisolone in a 28-day trial involving 123 dogs treated at 12 veterinary clinics across Australia. In that study, the major difference in the two drugs was seen at the 14-day mark. The comparative benefits leveled off by day 28. 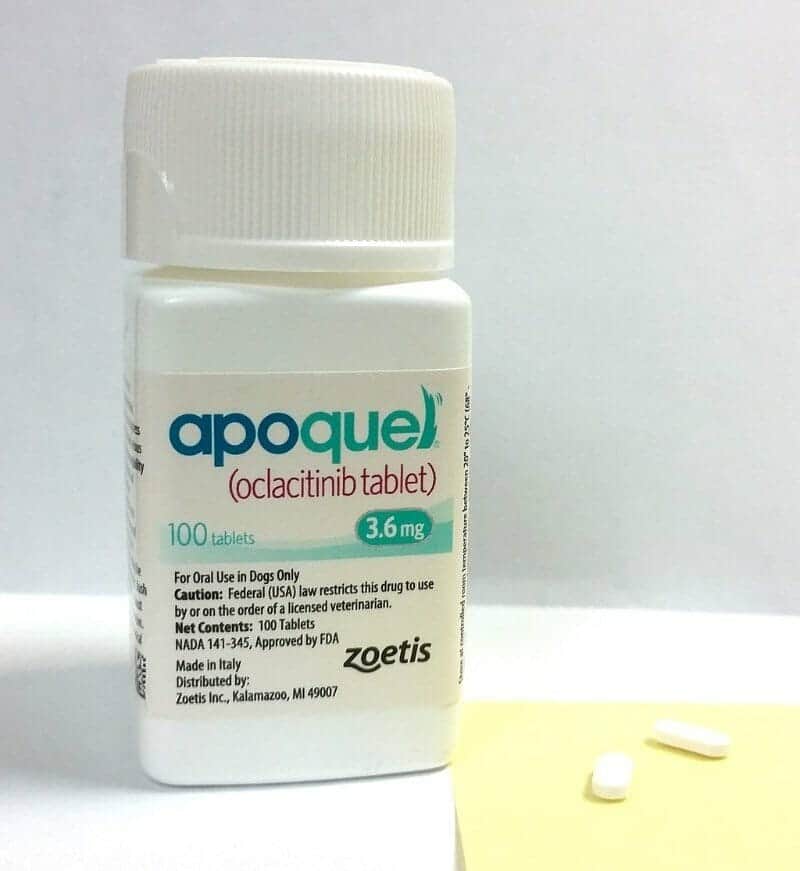 Apoquel, made by Zoetis pharmaceuticals, is a commonly prescribed treatment for atopic dermatitis and skin allergies in dogs.

The results of the Zoetis trials have been echoed in clinical practice, according to several published reports. University of Wisconsin Veterinary Care, for example, writes that they obtained:

Dr. Melissa Eisenschenk, DVM, DACVD of the Pet Dermatology Clinic in Maple Grove Minnesota, reports similar results for most dogs. She cautions, however, that some dogs develop recurrent symptoms when they are tapered from twice daily dosing to once-a-day dosing after two weeks. (Apoquel is not FDA approved for twice-daily dosing for longer than 14 days due to the risk of serious side effects.)

Prior to the introduction of Apoquel, steroid medications such as prednisone and prednisolone were a mainstay of treatment for dogs with atopic dermatitis and/or severe skin allergies. However, steroids, while effective, have many unpleasant and potentially dangerous side effects.

The Safety Profile of Steroids

According to VCA Animal Hospital, all steroid medications have the potential to cause significant short-term and long-term untoward effects, even when properly prescribed. Although veterinarians strive to minimize these issues by prescribing the lowest effective dose for every patient, most dogs will experience at least some of the following when receiving steroids for even a short period of time: 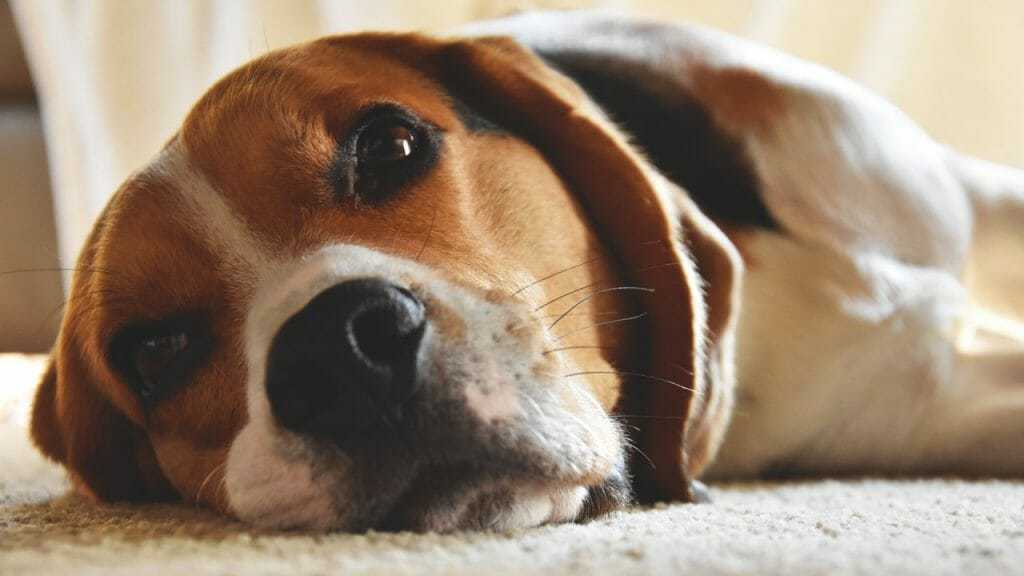 Dogs treated with steroids may become lethargic and overweight.

Additionally, dogs treated with steroids for more than three or four months are at risk for other, more serious effects.These include:

Long-term steroid use has also been associated with fatty changes in the liver and a predisposition to diabetes and pancreatitis, all of which can have serious implications for the dog’s health.

The Safety Profile of Apoquel

Because of the high incidence and severity of steroid-related side effects, most veterinarians welcomed the introduction of Apoquel — an apparently much safer alternative — with proverbial open arms. According to early data from Zoetis, the drug had been proven safe and effective and shown few unwanted effects. Transient vomiting, diarrhea and poor appetite were the most frequently reported negative side effects during clinical trials.

That said, JK-1 inhibitors work by suppressing naturally occurring substances in the body known broadly as cytokines. An integral part of a dog’s immune system, cytokines act by “signaling” other cells to behave in certain ways. For example, cytokines called interleukins signal the immune system to release substances that promote inflammation, an essential part of the body’s response to injury. (Think redness, swelling and pain at the site of a sprained ankle.). Interleukins also play an important role in hematopoiesis, the process by which the body makes red and white blood cells.

Another cytokine, interferon, “talks” to other cells in the body when it detects the presence of pathogens (microbes capable of causing infection), signaling them to mount an immune response. And then there’s tumor necrosis factor, a cytokine  involved in regulating cell proliferation, cell differentiation and cellular death. It plays an important, albeit poorly understood, role in both promoting and inhibiting the growth of cancer cells.

Obviously, cytokines are a ubiquitous and very important part of a dog’s immune system. And while Apoquel was designed to hone in on only those cytokines that create the “itch” response, in practice its reach is actually far wider than that. And that’s where some of the concerns about Apoquel’s safety come into play.

Since Apoquel was introduced in 2014, only one study has been conducted to evaluate its long-term safety. Published in 2015, the study looked at 247 dogs who were taking Apoquel for up to 630 days. The research assessed both the drug’s efficacy and the incidence of untoward side effects and health-related events.

Overall, the incidence of serious side effects in dogs taking Apoquel was relatively low. Still,  there were some significant disparities between the health effects seen in dogs who took Apoquel over a long period of time and the side effects encountered in Zoetis’ short, placebo-controlled trial. According to a 2016 letter from Neal Bataller, ME, DVM, Director of Surveillance and Compliance at the FDA Center for Veterinary Medicine, dogs taking Apoquel  long-term had a higher incidence of:

These side effects are consistent with Apoquel’s FDA-approved package insert, which states the drug may increase susceptibility to infection in some dogs. What’s more, the company’s failure to include these and other health related events in its promotional materials was deemed “misleading” by the FDA.

In addition to heightening the risk of infection, there is considerable evidence that Apoquel may worsen pre-existing cancers or exacerbate precancerous conditions in susceptible dogs.

This appears to be substantiated by the number of dogs who developed cancer during the aforementioned study, even though the overall incidence of new cancers was low.

According to  Deva Khalsa VMD,the researchers who conducted the 2015 study reported that  between day 51 and day 320:

Additionally, one dog developed symptoms of advanced liver disease and was euthanized before a diagnosis was made.

Apoquel also caused a host of serious and sometimes life-threatening health events in dogs between 6 and 12 months of age. In a clinical trial that looked at the safety and efficacy of Apoquel in dogs in this age group, the incidence and severity of adverse events was so great that Zoetis stopped the study and added a statement in the package insert warning that Apoquel is not recommended for dogs under 12 months old.

The adverse events seen in these dogs included: 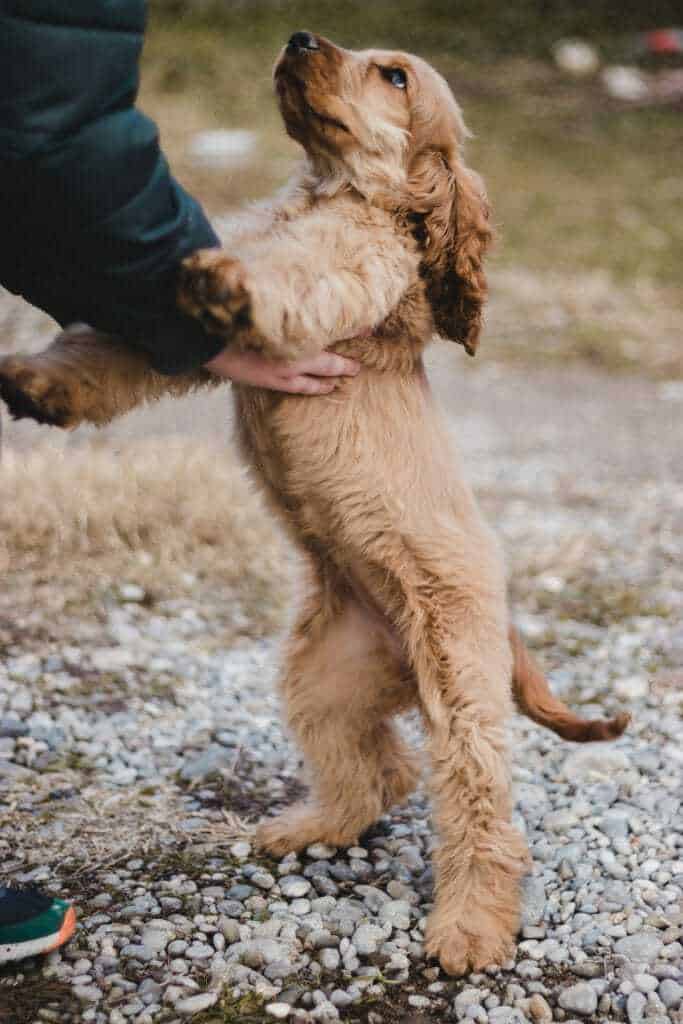 Apoquel in the Real World

With all this said, the truth is that virtually all drugs come with a risk of side effects. Antibiotics literally saved the world from the scourge of infectious diseases.Yet thousands of people have died from allergic reactions to those life-saving drugs. And today, their indiscriminate has led to the rise of antibiotic resistant bacteria such as methicillin resistant staph aureus (MRSA) — deadly adversaires that we have little power to stop. Every positive has an equal and opposite negative. That’s nature’s law.

So, the important question we should be asking about Aporquel isn’t, “Is it safe?” since safety is a relative term. Instead, dog owners should ask themselves and their veterinarians,  “Do the benefits of Apoquel outweigh the risks? Is it worth exposing my dog to the possibility of infections or cancer to give him a better quality of life? “

For most veterinarians, the answer appears to be “Yes.” My vet believes the drug is perfectly safe when given at the recommended dose and has prescribed it for my dog more than once. And Dr. Melissa Eisenschenk, who claims to have treated close to 1,000 dogs with Apoquel, agrees —  with the caveat that dogs should be screened for liver disease (a side-effect of JK-1 inhibitors in humans) and have blood work done at least once a year.

Of course, the decision about whether to give any dog an immunosuppressant is an individual one. So make sure you speak with your vet about any concerns you have and discuss possible alternatives if you have any misgivings about the drug. 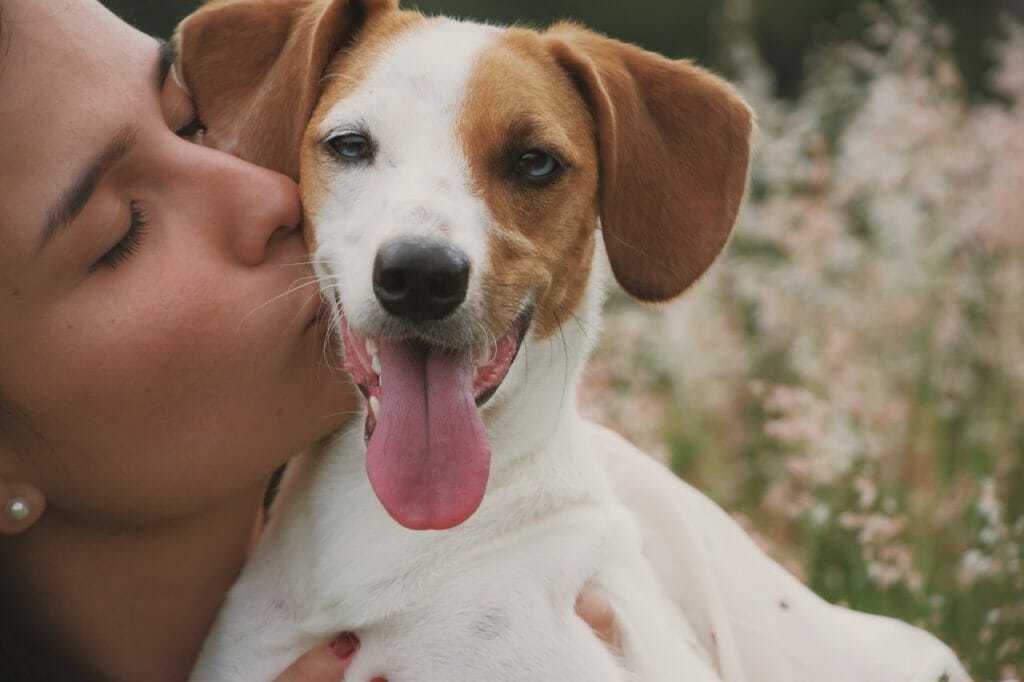 We all want to give our dogs the best life they can possibly have. If your dog is suffering from persistent itching, ask your veterinarian if Apoquel can improve his quality of life. 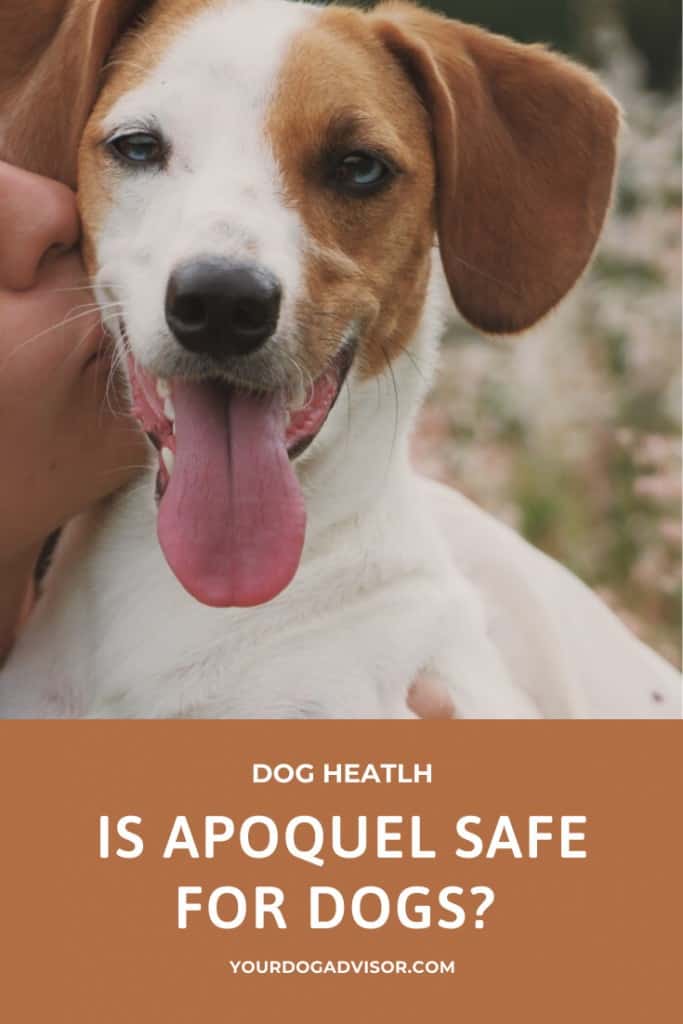