Yeast infections are annoying. They thankfully aren’t life-threatening for humans or our animal friends, but they cause significant irritation and can even indicate other health problems. Unlike humans, dogs can also get these infections on their paws, causing itchiness and redness.

A dog paw pad yeast infection occurs because of an explosion of the fungus in or on the body. They can also be connected to other health problems.

They’re known to cause itchiness, a musty odor, and a discharge from the skin. While they can be treated with some home and store-bought remedies, it’s best to take your dog to the vet if this is your first time dealing with one of these infections.

What is a Yeast Infection?

A paw pad infection is like any other yeast infection with similar causes. They can also occur on the skin or in the ear. They’re known to develop in dark, moist areas of the body where there’s not much airflow.

As the name suggests, these infections are caused by yeast problems. Yeast itself isn’t a problem; it’s everywhere and is mostly harmless. Some varieties of it can be harmful, others can be useful for making things like bread, and others just don’t do anything significant. But when there’s too much of it, it can irritate the skin and cause an infection.

Yeast infections occur when your dog has too much of the fungus built up. They are most common on parts of the skin with lots of folds and moisture, like paw pads. 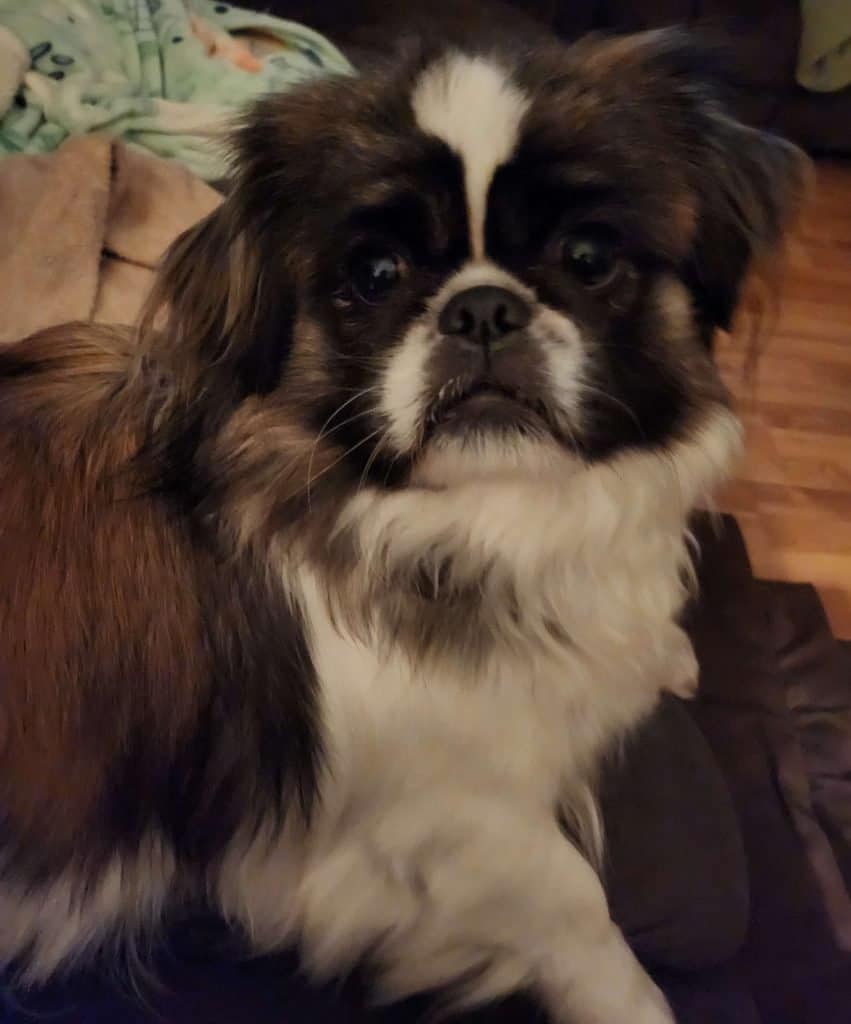 Yeast infections are caused by an overgrowth of the fungus, usually in a moist area that doesn’t get much air like the paw pad.

A dog’s paw is constantly on the ground and exposed to the elements. They get dirty and wet, or they can get cuts. All of this can irritate your pup’s paws and trap moisture, which yeast loves. If the elements irritate your dog’s paw, they may also lick more, which can also make it worse.

The paw pad also doesn’t have a lot of airflow going between those tiny pads you see. It’s easy for moisture and bacteria to get trapped between the toes.

Connections to Other Health Problems

If your dog seems to be having constant infections, you may want to get them checked for other problems.

Allergies can affect the skin, causing infections. Environmental problems like pollen, fleas, and skin allergies can be major triggers.

Food allergies can also affect the skin condition and help infections develop. Make sure you’re watching your pup’s diet, eliminating foods to rule out any allergies if needed.

This bacterial skin infection may help trigger yeast infections in your dog as they negatively impact your pup’s skin condition. Pyoderma can be caused by allergies to fleas, a parasitic infection, or immune disorders.

Your pup may have a pyoderma issue if they have red skin or bumps, circular crusts, hair loss, or flakes of dry skin. There are multiple types of pyoderma, and you may need your vet’s help diagnosing which one it is. 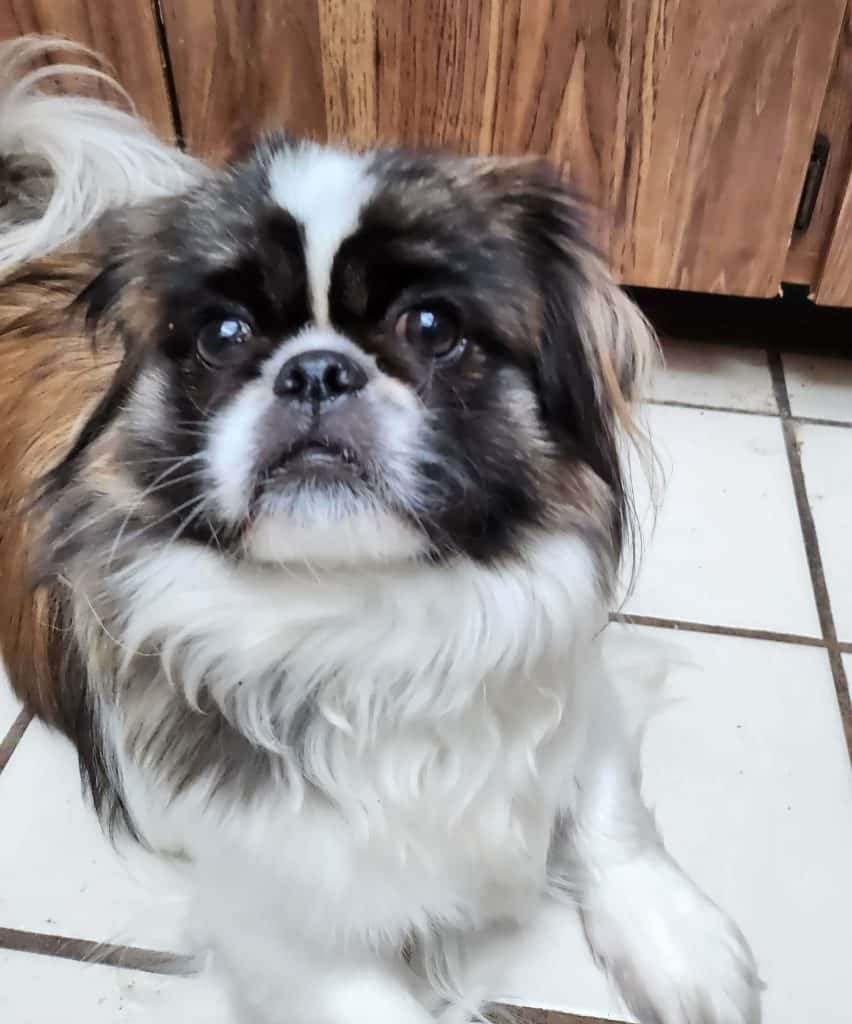 Yeast infections can be caused by other underlying health problems.

Cushing’s is also associated with increased thirst and urination, weight gain, and a pot-bellied appearance. It can also be linked to kidney infections and other problems. While it’s not deadly by itself, it’s best to get it dealt with as soon as possible.

If your dog has suffered a cut or wound– particularly on the paw– all kinds of bacteria and moisture could get trapped in those cuts and cause problems for the skin.

If you notice a cut or wound, it’s best to get it treated immediately to avoid any kind of infection. If it’s a more serious wound, you should go to the vet.

If your dog has a paw pad yeast infection, you’ll likely notice them licking and chewing at their pads a lot. This is probably because the itchiness is unbearable.

If you look at the paws, they’ll probably be red, inflamed, and maybe crusty. These infections also cause a strong, musty odor that you’ll probably notice right away.

You’ll probably notice a gross-looking discharge from their skin or nail beds. This is the fungi overgrowth. The skin may also be thickened and greasy. 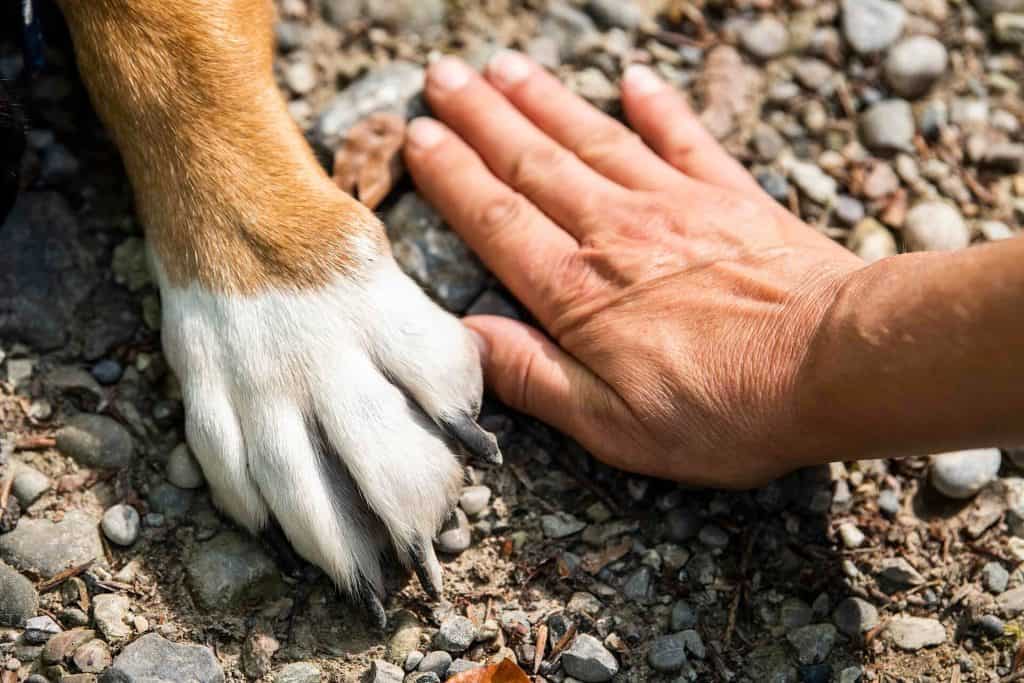 Watch your dog’s paws for redness, greasy skin, discharge, and a strong odor.

If you notice these symptoms for the first time, it’s best to consult your veterinarian first. They can usually easily diagnose your dog’s infection and prescribe medications and advise you. They can also provide oral medications in severe cases. That said, there are some home remedies you can try as well.

Antifungal shampoos are the most common treatment of choice for yeast infections. Not only will they kill the extra fungi, but they’ll also kill any other harmful bacteria. 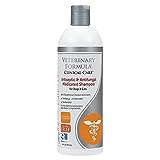 These sprays can help your pup’s skin condition and kill harmful bacteria, including yeast. Sprays and creams with chlorhexidine, ketoconazole, or miconazole are best for yeast infections.

You can use medicated wipes to gently clean in between your dog’s toes. This will clean out the fungi and bacteria. Keeping your pup’s toes clean will also help prevent future infections.

While treatment is important, you also want to prevent your companion from getting an infection in the first place. Yeast infections in general are a fairly common problem, but it’s possible to prevent them by keeping your dog’s feet (and other body parts) as clean and dry as possible.

Dogs use their paws all the time. They walk on and over some disgusting stuff. There’s no telling what kinds of gross bacteria are getting between their little toes.

You’ll want to wash your companion’s feet after walking them, especially if you know they’re prone to infections or they’ve been doing some intense exercise. Sweat may build up between the toes after intense exercise.

Once you’ve thoroughly washed their paws, make sure you dry them off completely. Leaving them wet could backfire and cause an infection.

If you think your dog’s infection is caused by a food allergy, you may want to consider changing their diet, with a vet’s advice if needed. If a food allergy is involved, the infection may just come back after you’ve cured it.

If a food allergy is involved, you should notice other signs like itchy skin and potentially an upset stomach. An elimination diet may be needed to find out exactly which ingredient is causing the problem before making a full switch.

While a diet change may be necessary, make sure you follow the correct steps to introduce your companion to their new food. Slowly introduce small amounts of the new food into their diet throughout the week. Suddenly switching may upset their stomachs and cause diarrhea. 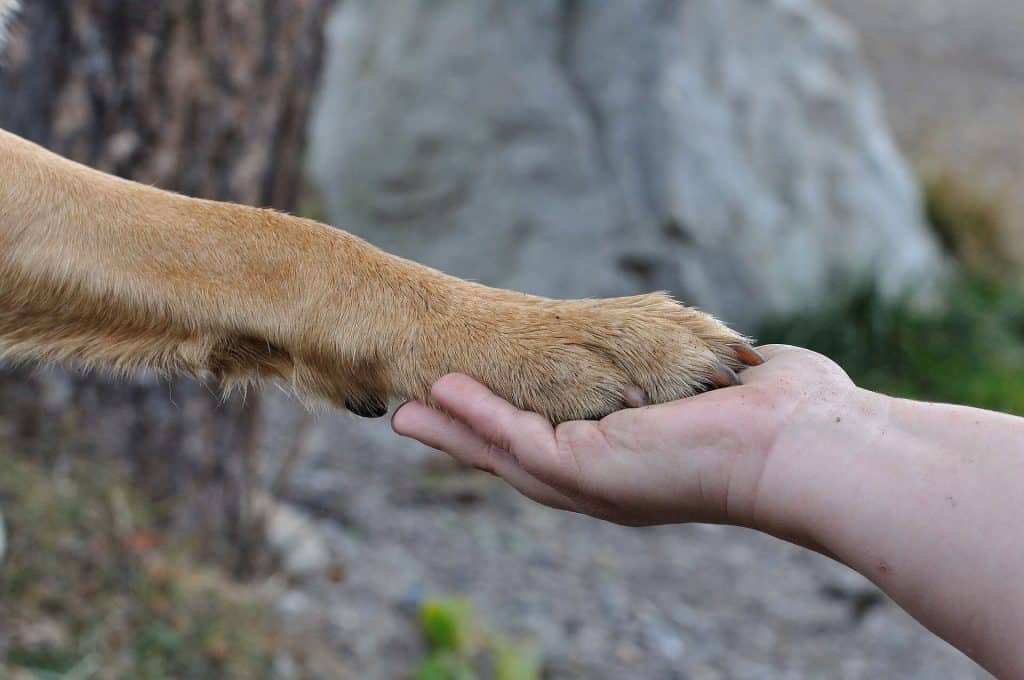 Find and Manage Other Health Problems

As stated earlier, yeast infections can be an indication of another health problem. There may be another skin allergy or an infection causing it, a cut or wound that wasn’t treated, or another disease like Cushing’s causing problems.

Make sure you’re taking your companion to the vet regularly so they can diagnose these problems before they get out of hand. If your pup’s infections are being caused by another problem, it could be a warning sign of something worse.

If you notice any constant stomach issues, lethargy, major skin problems, or anything else noteworthy, call the vet ASAP. Also make sure your pup is up to date on all parasite preventatives, especially flea preventatives.

Yeast infections are a pain, and we can only imagine how annoying they are on the paws. While they aren’t life-threatening, they can irritate your dog and make them incredibly uncomfortable. It’s best to deal with them as quickly as possible.

If you notice their paws are red and crusty with a strong odor and discharge, it’s probably a paw pad yeast infection. It could have been caused by the elements outside, skin or food allergies, or an underlying health problem.

If your pup has an infection, there are remedies including topical creams and antifungal shampoos that can help. It’s recommended that you contact a vet if it’s your pup’s first time dealing with one or if you’re worried it’s connected to an underlying health condition.

Try to get ahead and prevent infections by keeping the paws clean and dry and staying ahead of other health problems. Keep your pup’s immune system and skin healthy to help prevent one of the most annoying infections dogs can get. 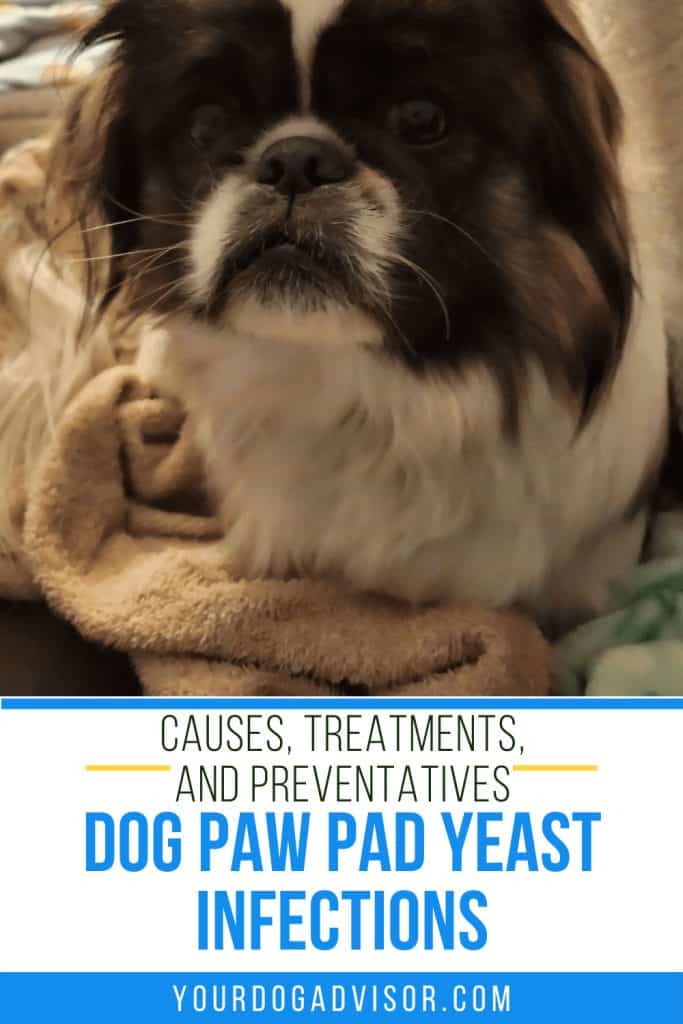 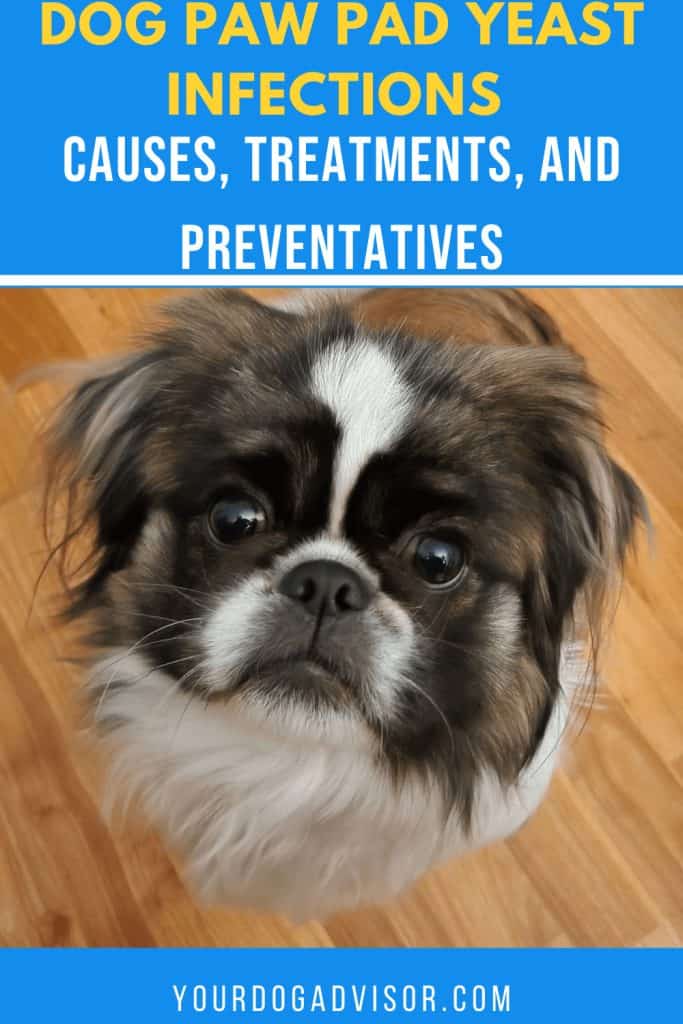