Although a lesser-known breed overall, the Tibetan mastiff is one dog that is sure to leave an impression. These giant, bear-like canines are slowly growing in popularity in the west and have been used as livestock guardians in China and India for centuries.

If you’re considering adding a Tibetan mastiff to your family, you’ll want to do your research first. This breed is as powerful as it is beautiful and, although very intelligent, they are not well known for their obedience skills.

Still think you have what it takes to own a Tibetan mastiff? Keep reading to find out more about his majestic giant. 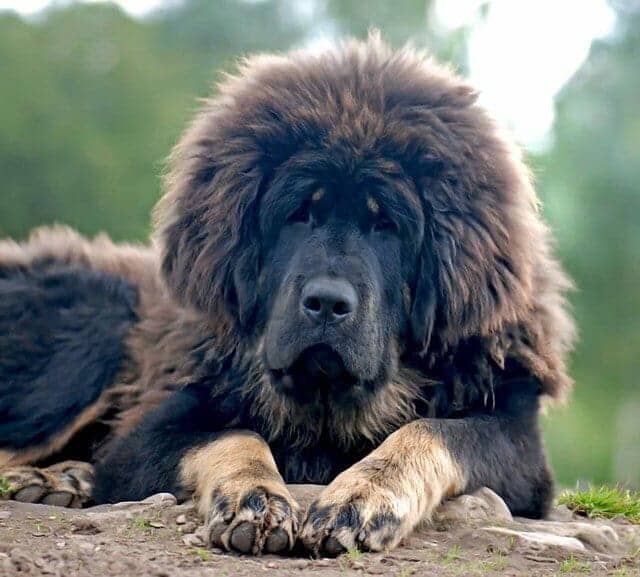 General Characteristics of the Tibetan Mastiff 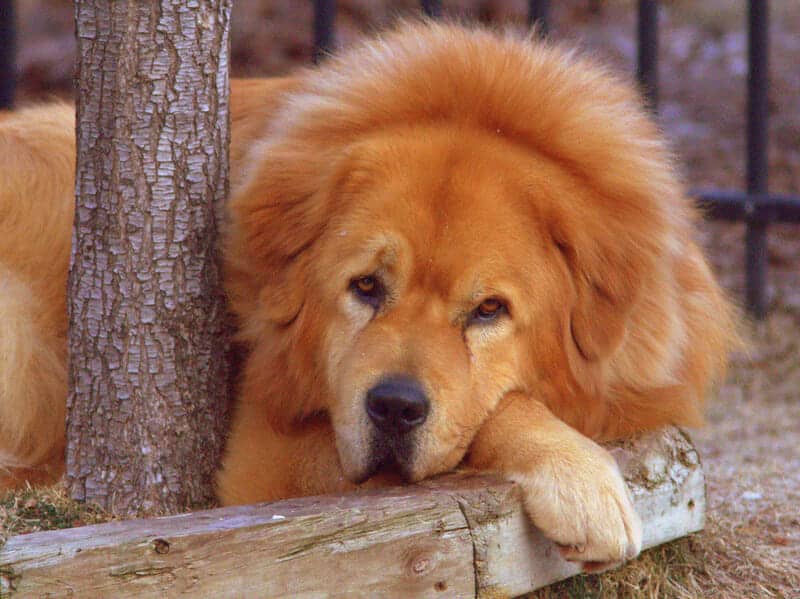 History of the Tibetan Mastiff

Tibetan mastiffs have been used as livestock guardians in the Himalayas and Tibetan Plateau for centuries. Their long coats and formidable size make them the perfect weapon against predators like tigers, snow leopards, and bears.

They are a primitive breed that is well adapted to life in high altitude habitats. It is believed that these types of dogs were bred with the wild Tibetan wolf early in history. This is likely the reason modern TMs have high levels of hemoglobin, which make them resistant to hypoxia and other health problems related to life in low oxygen environments.

More recently, Tibetan mastiffs have become popular guard dogs for homes and property. Chinese and western breeders, in particular, have worked to create lines of extra-large TMs that can sell for thousands of dollars.

More responsible breeders have sought to make the majestic, lion-like mastiff more appealing to the average family by breeding only the most easy-going of individuals.

Recent studies into dog DNA have provided evidence that early versions of the breed may have given rise to more well-known European livestock guardians like the Bernese mountain dog, great Pyrenees, and Saint Bernard. 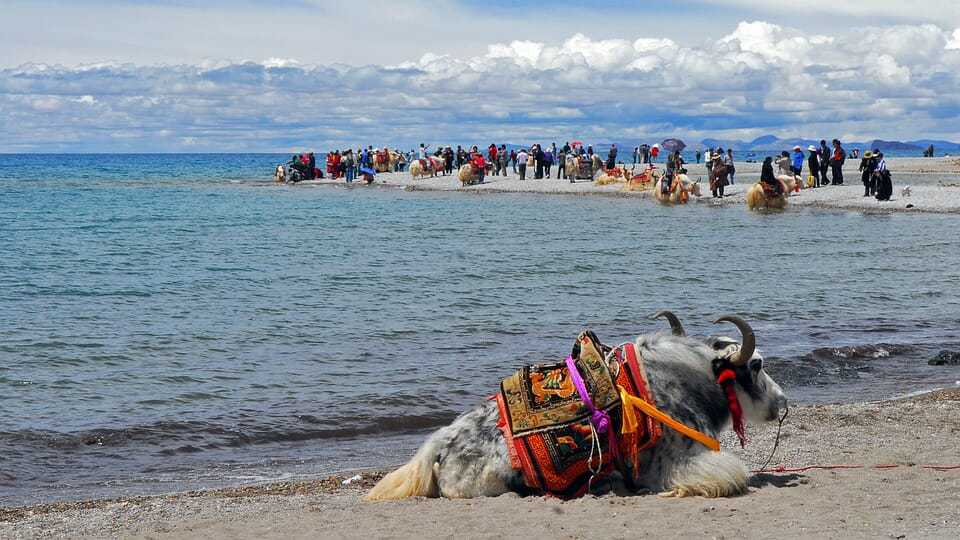 The Tibetan Plateau sits at 16,000 feet above sea level. All people and animals who live in this extreme environment, including the canines, are well adapted to thin air and frigid temperatures.

Like most livestock guardians, Tibetan mastiffs are loyal to their family but aloof with strangers. They have a strong will and independent nature which can make them difficult to train and impossible to keep in tight quarters.

They require a confident owner with experience raising stubborn dogs. With the right amount of exercise and stimulation, it is possible to own one in a more traditional suburban setting, but these dogs would prefer life in a rural environment with a large yard to roam and a job to keep them busy.

In their homelands, these dogs are chained up most of the day and let free to guard the village and livestock at night. This unusual sleep-wake pattern is still alive and well in many TMs found in the west. So don’t be surprised if your TM keeps the whole neighborhood up with its night barking habits.

>>>Need help teaching your dog not to bark all night or all day? Learn how to train your dog to stop barking on command.

As guardians, these dogs don’t take well to visitors or trespassers and may become aggressive in some situations. Proper socialization and training are key if you plan to keep a TM as a companion animal.

While these dogs will do fine with moderate exercise, they are highly intelligent and may become destructive without enough mental stimulation. Frequent hikes are a great way to keep older mastiffs stimulated while dog competitions such as cart pulling and protection sports offer a great way to tire out younger dogs and build a strong owner-dog bound. 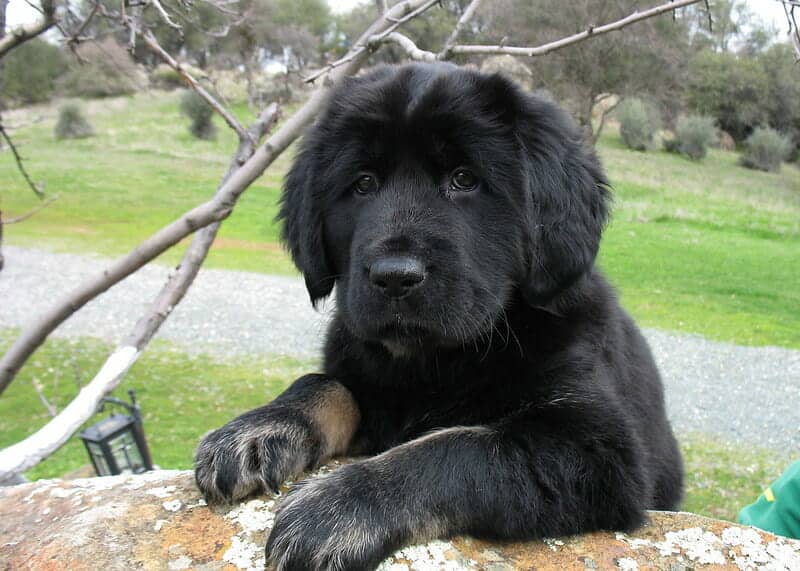 Even as puppies, Tibetans are big dogs that require an experienced owner to care for them. “Puppies” by brentolson / CC BY-NC 2.0

Health Issues are Common to the Tibetan Mastiff Breed

Like many ancient breeds, well-bred TMs are relatively free from genetic disease. Unfortunately, their recent rise in popularity has led to an increase in inbreeding. Many lines, especially those bred in the US, Europe, and China are plagued with hereditary diseases.

As with many large breeds, TMs are prone to joint issues and hypothyroidism. They can also suffer from a wide range of eye issues.

The most common diseases seen in the Tibetan mastiff are:

If you plan to purchase a TM from a breeder, make sure you do your homework. All responsible breeders will allow you to meet the dam and sire, see where the litters are yelped, and speak to previous buyers. They should also have health records available on the breeding pair, as well as their parent lineages. 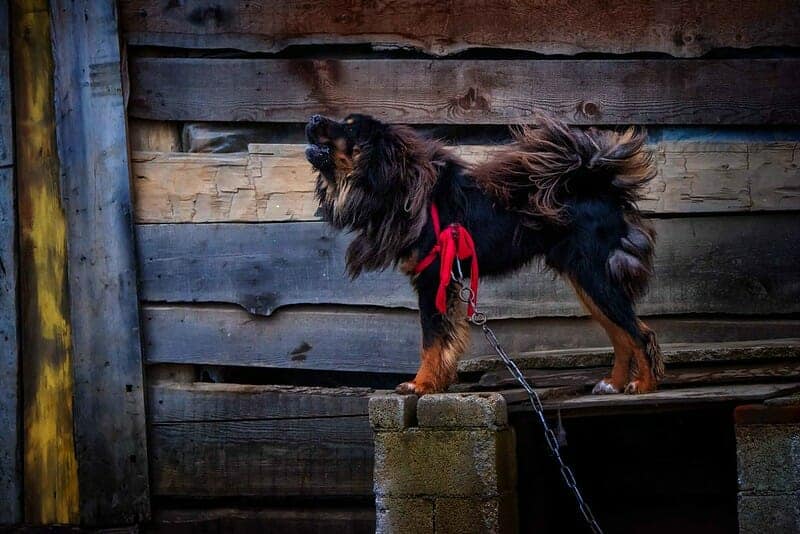 The TMs found in the region of Tibet, Bhutan, and Nepal are typically robust with few health issues. Unfortunately, many of the lines found in China, the US, and Europe aren’t as free from hereditary disease. “Tibetan Mastiff” by Rod Waddington / CC by 2.0

Many less-responsible breeders of TMs use photoshopped pictures to market their dogs and inflated pricing to exaggerate the appeal of their puppies. Larger than normal and expensive dogs don’t always mean a healthier, better tempered pet.

Due to their lesser-known status, there aren’t a lot of purebred TMs available for adoption. But their less-than-easy temperaments mean rehoming happens more frequently than with other breeds, so it’s worth checking with your local Tibetan mastiff rescue.

Do Tibetan Mastiffs Do Well With Children and Other Pets?

While livestock dogs are often thought of in light of their fierce protective qualities, it’s important to remember that guardian dogs also possess a gentle, loving side. If they didn’t they wouldn’t be very good at protecting their herd.

To that end, a Tibetan mastiff who is introduced to children and other pets at a young age is likely to be a very tolerant and loyal sibling. In fact, these giants can be especially adept at putting up with the antiques of young children and puppies. Of course, as strong as these dogs are, all interactions with children should be supervised.

While these dogs may be capable of taking on a tiger if it threatens their herd, they aren’t typically aggressive or predatory toward smaller pets like cats and rodents.

Check out this video to learn more about the ancient lion-dog.

TMs are very territorial if they are on their home turf and should be introduced to new canine housemates slowly and on neutral ground. Away from the house, they tend to be tolerant of other dogs, though some may show aggression towards dogs of the same sex.

Because they typically have dominant personalities, TMs do best with more submissive dogs as siblings.

What to Consider Before Bringing Home a Tibetan Mastiff

While owning a TM might sound like a challenge, it can also be very rewarding, as long as your lifestyle is a good match for their personality.

Here are some things to consider before committing to this breed.

Tibetan mastiffs tend to be relaxed and lazy in the house, but outside, they can be very active. They are also powerful climbers and jumpers, so a tall fence or a lot of property is a must to prevent escape. These dogs also take an extended amount of time to mature, so make sure you are prepared for two to four years of dealing with a highly active adolescent pup. 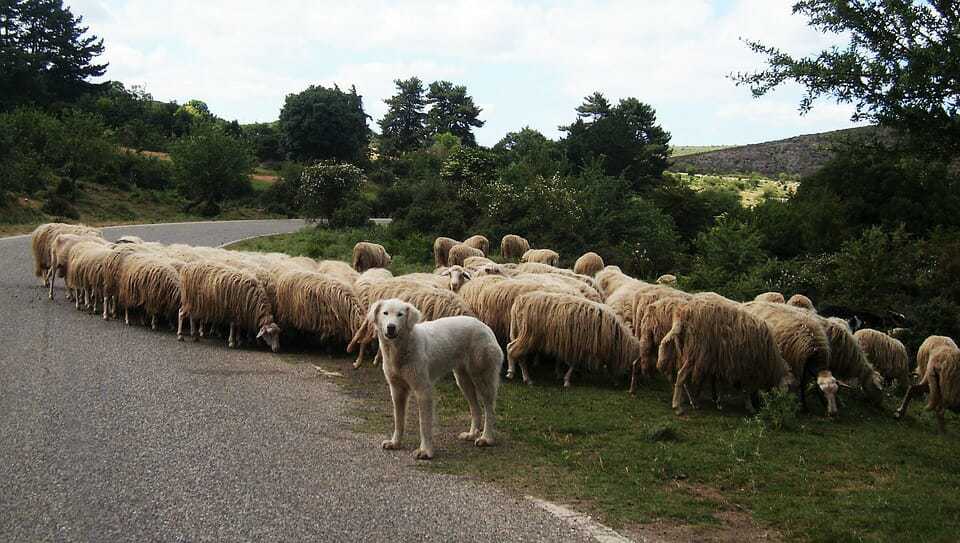 Unlike traditional herding breeds, TMs and other livestock guardians, like this great Pyrenees, don’t have any herding instincts. Instead, their natural drive is to stay with the herd as if they were part of their pack and they will defend it with the same passion as they would their own puppies.

TMs are not typically food motivated and don’t react well to being coerced or punished, so training them can be a challenge. At the same time, they are very intelligent and usually pick up on new behaviors after only a few repetitions. They require consistency and strong leadership and will thrive in relationships built on mutual respect.

While these furry giants tend to have a lot of hair, their coat is easier to care for than many long-haired breeds. Centuries of living in the wild has shaped a coat that is dirt and odor resistant that only sheds once during the spring. The occasional bath and brush are all most TMs require.

>>>Before you even consider bringing home a long-haired breed, you’ll want to see our list of the top ten must-have grooming tools.

These are large dogs that require a lot of food. At the same time, TMs are not known for their appetites and do well checking their own calorie intake. They are not prone to weight gain but stressed or otherwise preoccupied individuals may go on hunger strikes and lose weight. Provide a quality diet that is high in animal protein and fats and free from filler ingredients like corn and soy that may cause digestive upset.

While some especially famous TMs have sold for hundreds of thousands of dollars, you can expect most puppies to cost only a couple thousand. Investing in a well-bred puppy will save you money over the course of the dog’s life, but you should still be prepared to spend over a thousand dollars per year for food and vet care, even for a healthy dog.

10 Fun Facts About the Tibetan Mastiff

Now that you’ve learned everything you need to know about owning one of these majestic mountain hounds from the Himalayas, here are ten lesser-known facts about this breed. 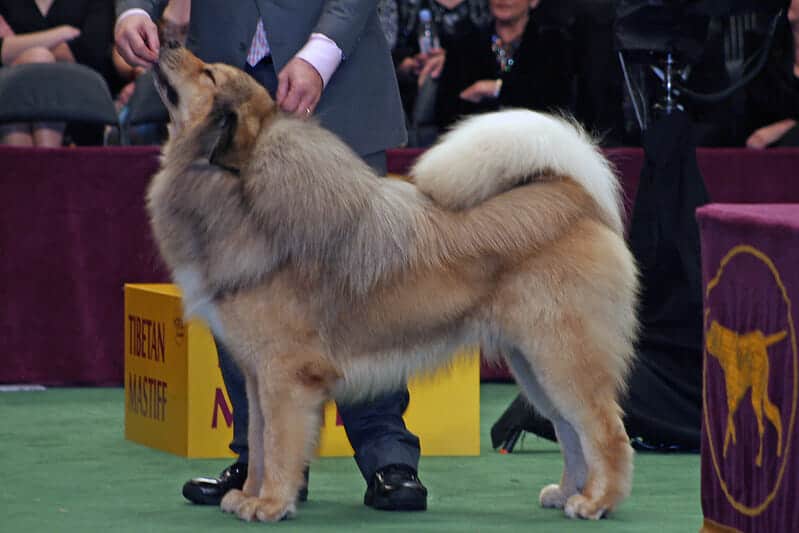 Still looking for the right dog for your family? Check out these Ultimate Breed Guides: 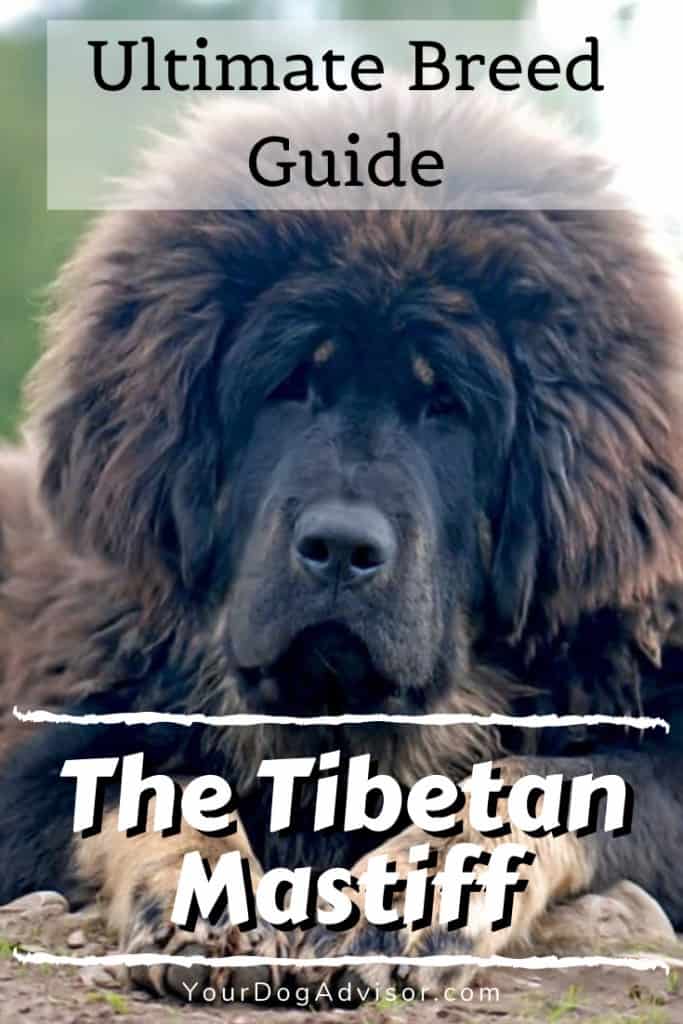