Like all mammals, dogs need to drink water in sufficient amounts to keep their bodies functioning normally. Water is essential to digestion, circulation and elimination, and plays an important role in regulating body heat. Without adequate fluid intake, a dog will become dehydrated and, in time, very sick. Severe dehydration can even result in death. 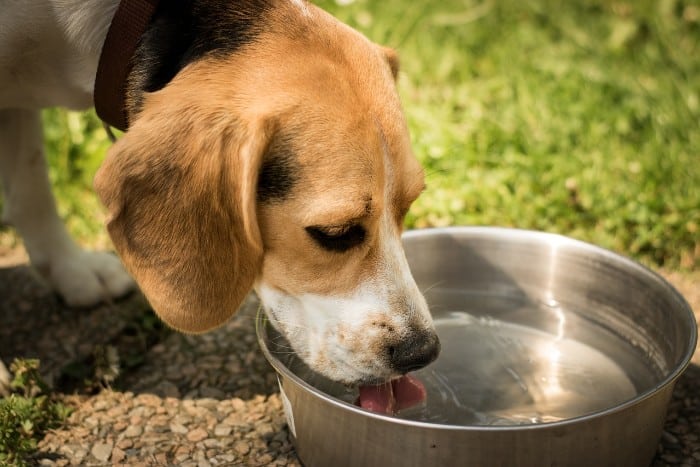 Healthy dogs normally regulate their water intake very well as long as they have plenty of fresh water to drink.

Normally, dogs self-regulate their fluid intake very well. As long as a dog has a bowl of fresh water available, he will generally drink enough water to stay hydrated but not enough to cause him harm. That said, there are a number of conditions that may cause a dog to drink more water than usual, and possibly more than he should. So if you’re wondering, “Why is my dog drinking so much water?” read on to learn what might be going on.

Dehydration is fairly common in dogs. It can happen due to  numerous causes, including overheating, vigorous exercise, vomiting and/ or diarrhea and underlying disease. And while dehydration can be a serious condition, in dogs who aren’t seriously ill, it is generally self-limiting. The dog’s body will detect a drop in blood volume (triggered by too little water) and secrete hormones that trigger the thirst response. So, as long as the dog has adequate water available, he will  drink enough to replenish the fluids that have been lost. Depending on how dehydrated the dog was, that can mean he drinks much more than normal for a while.

To keep your dog well-hydrated, remember to offer him at least ½ to 1 ounce of water per pound of body weight every day. (That’s about a cup-and-a-half to 3 cups of water daily for a 25 pound dog.) Keep in mind, however, that this is the average amount of water a healthy dog should drink. If your dog is exercising heavily, or if the temperature is very high, he will need more. 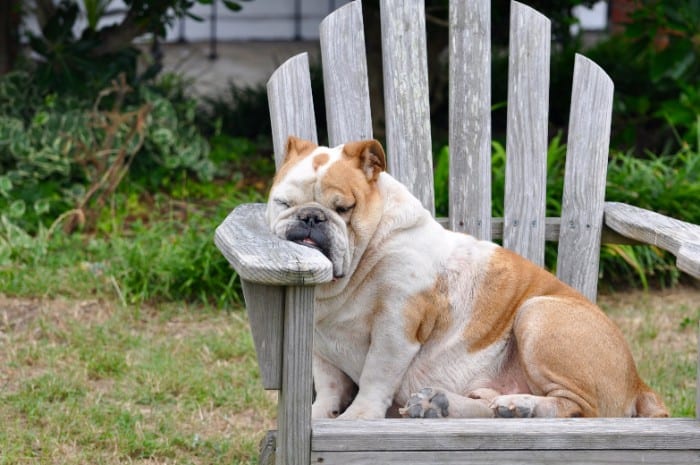 Dogs can get dehydrated if they are outside in the heat for too long.

Vomiting and diarrhea also increase the amount of water a dog needs, though he may not be able to take in adequate quantities if his gastrointestinal issues are severe. If your dog is vomiting and refusing to drink, contact your vet. She may recommend an electrolyte replacement drink such as Pedialyte or fluid replacement via the subcutaneous or intravenous route.

Diabetes is a condition in which a dog’s body fails to make sufficient quantities of the hormone insulin or when adequate insulin is present, but it can’t be properly utilized (insulin resistance.) Insulin is necessary for the proper transfer of glucose — a product of digestion that is one of the body’s main sources of energy — into the cells. When enough insulin isn’t available, too much glucose remains in the bloodstream, a condition known as hyperglycemia. The only way the dog’s body can rid itself of this excess glucose is through the kidneys, which flush it out along with large amounts of water. This results in excess urination (polyruria) and, because the dog is trying to replenish lost fluids, excess thirst (polydipsia.) In many cases, the dog will also be excessively hungry (polyphagia) because the cells of the body are literally starving despite the fact that the dog is eating enough. This triad of symptoms is often referred to by medical professionals as “The Three P’s”.

Diabetes is most common in middle-aged and older dogs, especially those who are overweight or obese. According to the American Veterinary Medical Association, the average age of onset it between 4 and 14 years age, with the majority of diagnoses occurring between 7 and 10 years. In addition to the Three P’s mentioned above, a dog with diabetes may also show other symptoms, such as: 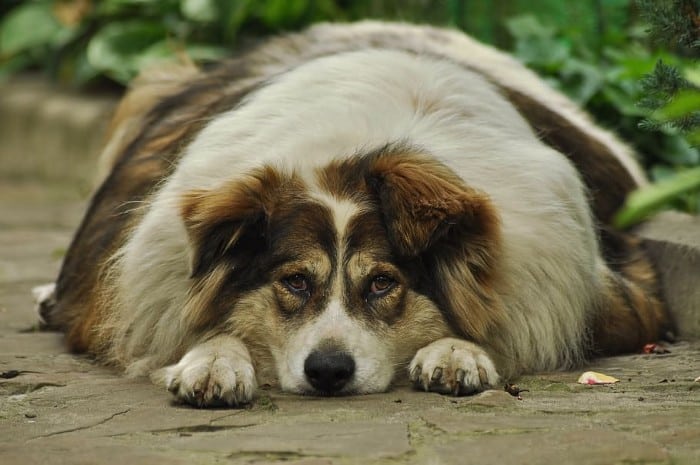 Overweight dogs are more prone to diabetes than dogs who are normal weight.

Chronic hyperglycemia is an extremely serious condition that can damage internal organs, including the kidneys, heart, brain and nerves. It can also lead to cataracts and blindness. If left untreated for too long, high blood sugar can also bring on a life-threatening condition known as diabetic ketoacidosis (DKA), which occurs when the dog’s body — starved of glucose —  begins to break down fat for fuel. Signs of DKA include panting, tiredness, vomiting and a fruity odor to the breath.

If you suspect your dog is suffering from diabetes, take her to the vet as soon as you can. The vet will draw blood and check her urine, which should quickly determine if diabetes is the cause of your dog drinking so much. Diabetes is quite treatable, especially if caught early. Most dogs go on to live long, relatively healthy lives.

Largely seen in middle-aged and older dogs, Cushing’s disease, or Cushing’s syndrome as it is sometimes called, is caused by an excess of the hormone cortisol in the blood. Produced by the adrenal gland, cortisol is often referred to as the body’s main “stress hormone” because it is produced in higher quantities when a dog is under some kind of stress. Cortisol plays a very important role in many bodily functions, including: 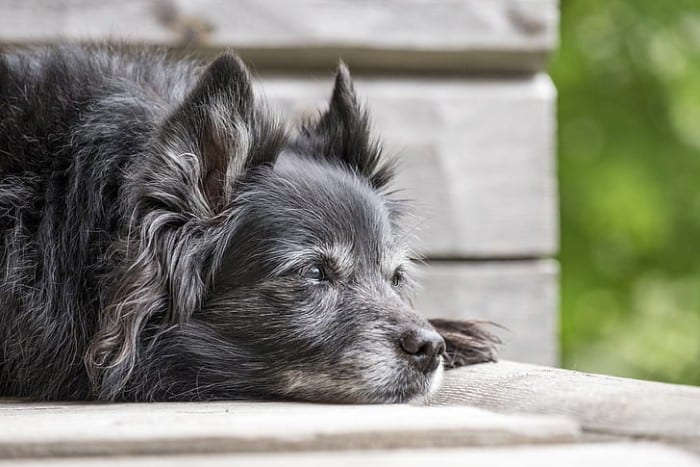 Older dogs tend to suffer from Cushing’s disease more often than younger ones. Symptoms vary, but drinking a lot of water is a common sign.

Some dogs may also develop what’s called Iatrogenic Cushing’s syndrome, which is caused by the administration of oral ot injectable steroids for a long period of time.

In addition to being very thirsty, dogs with Cushings disease tend to urinate more than normal and may be incontinent, especially at night. Other signs of Cushing’s syndrome include:

Cushing’s disease is usually treatable with either medication of surgery. If you suspect your dog is suffering from Cushing’s disease, make an appointment to have him evaluated by your vet.

The kidneys are two bean-shaped organs that sit on either side of the abdominal cavity. One of the most important organs in the body, they are responsible for filtering toxins and other by-products of metabolism from the bloodstream and manufacturing urine through which waste products are eliminated. They also regulate the amount of important minerals called electrolytes in the body, and help maintain water balance and blood pH.

As dogs age, their kidneys become less efficient, and some of their filtering capacity is lost. This is a gradual process, and symptoms don’t usually show up until the problem has been going on for months of even years. According to VCA Animal Hospitals, the average age of onset of chronic kidney disease in small dogs is 10 to 14, but it can occur as early as 7 years of age in larger breeds. 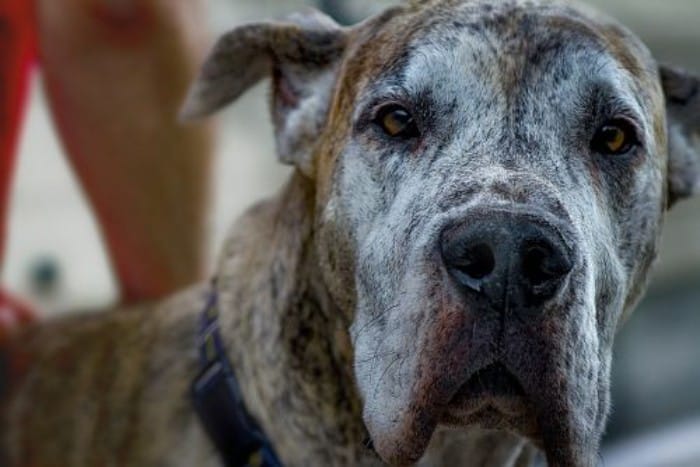 Large breed dogs are more likely to suffer from kidney disease at an earlier age.

As the kidneys become less efficient, waste products and toxins build up in the blood. In an attempt to rid the body of these substances, blood flow to the kidneys is increased. This forces the kidneys to produce more urine, and, hence the dog urinates more. To make up for this fluid loss, she drinks more water as well. These two symptoms —  increased urination and increased thrist — are two of the earliest signs of chronic kidney failure in dogs.

Kidney disease due to aging is generally progressive, but that doesn’t mean there’s nothing that can be done to help your dog. Depending on the stage of kidney failure (that is, how much kidney function has been lost) your vet can put together a treatment plan that can help your dog live relatively well for many months or evern years. With that being said, the earlier treatment is institutued, the higher the likelihood of success. So if your dog is drinking too much water and urinating a great deal, take her to the vet right away.

Pyometra is an infection in the uterus in an unspayed, female dog. It is most common in older dogs who have gone through multiple cycles of estrus (heat), but it can also occur in a younger dog. Symptoms usually show up about 1 to 3 months after the dog’s last heat.

Pyometra occurs as a result of a number of factors. Following an estrus cycle, a dog’s ovaries produce increased amounts of the hormone progesterone, which causes the uterine lining to thicken in preparation for pregnancy. If the dog doesn’t become pregnant, progesterone levels fall off after about two months, but the thickening in the lining of the uterus remains. After the dog goes through multiple estrus cycles, the uterine lining may become so thick that cysts begin to develop in the uterine wall, a condition known as cystic endometrial hyperplasia. This thick, cystic uterine lining also secretes fluid, which creates a perfect environment for harmful bacteria to grow. 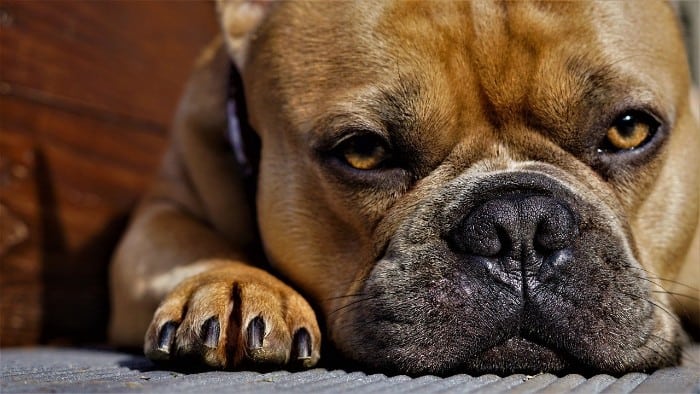 A dog with pyometra will usually appear quite ill and may or may not have vaginal dischage. Drinking a great deal of water is another important sign.

Bacteria may enter the uterus during estrus, when the cervix (the opening at the mouth of the uterus) is open to allow sperm to enter and impregnante the dog. In a dog with a healthy uterus, this isn’t a problem — the normal uterine environment inhibits bacterial growth. But in a dog with endometrial hyperplasia, those bacteria can multiply. When this happens, infection ensues, and the uterus fills with pus. The most common culprit in these infections is the bacteria Escherichia coli (E.coli).

The symptoms of pyometra depend on whether the dog’s cervix If it is open or closed.

Additionally, if the offending organism is E. coli, the dog may be urinating more frequently and drinking a lot of water. This occurs because E.coli excretes a toxin that damages the kidneys, causing urine output to increase. The dog attempts to compensate for the excess fluid loss by drinking more.

If your dog is an unspayed female of any age and she suddenly begins to drink a lot of water, urinate more frequently, and appear unwell, it’s important to have her evaluated by your vet right away. Pyometra is a very serious infection that can be fatal if the infected uterus isn’t removed. But with proper treatment, the dog can be cured and live a long and healthy life.

Sometimes the cause of excessive thirst in a dog isn’t a disease, but the medicine used to treat a disease. Just as in humans, many medications can cause a dry mouth or physiologic effects that increase thirst.

Some of the most common of these include:

Antihistamines are often used to treat allergies in dogs. They have various side effects, including tiredness,lethargy and increased thirst.

Increased thirst is a common occurrence in dogs. Many times, it’s nothing serious. Your dog may just have exercised too vigorously or gotten a little dehydrated playing outdoors. But if your dog is drinking a great deal more water than usual over an extended period of time, there may very well be something serious going on. And since most illnesses respond best when they are treated early, it’s a good idea to bring your thirsty pooch in for a checkup as soon as you can. 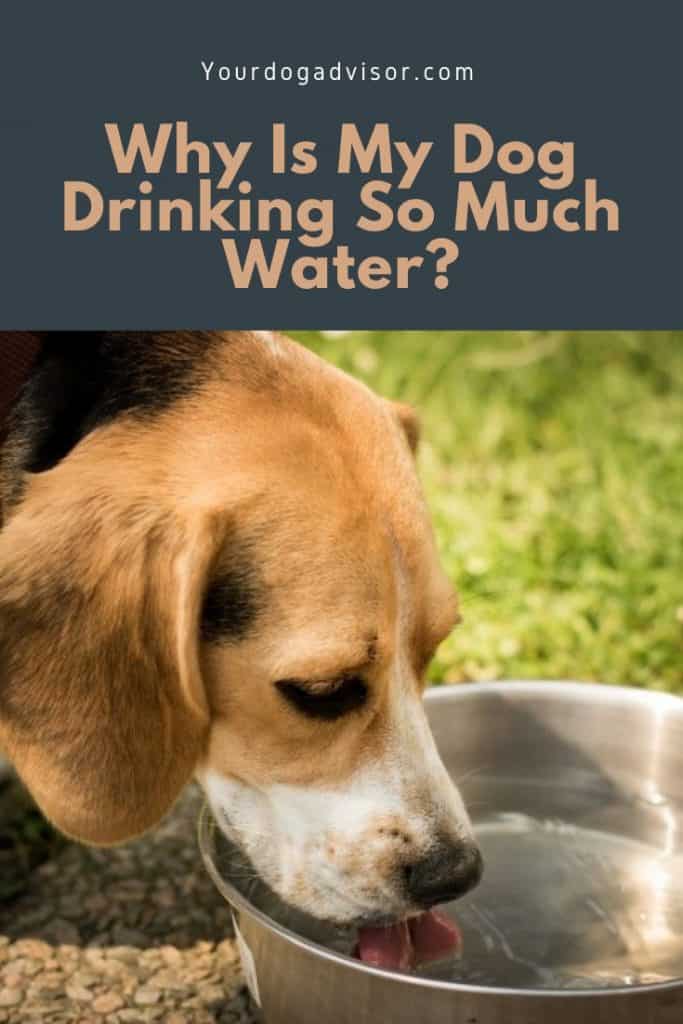