Like humans, dogs can suffer from occasional dehydration, either from repeated episodes of vomiting or diarrhea, exercising vigorously in hot temperatures, or an illness that causes a fever. Diabetic dogs may also become dehydrated due to hyperglycemia (too much sugar in the blood), which causes them to urinate excessively. Even heavy panting (usually caused by being too hot) can cause a dog to lose more water than he is taking in, with dehydration as a result. A dehydrated dog may appear listless and be uninterested in food or water.

Dogs who are dehydrated may also lose important minerals, or electrolytes, such as sodium, magnesium, calcium and potassium, which are necessary to the normal functioning or muscles and nerves and the maintenance of proper acid/base balance in the blood. Severe dehydration and electrolyte disturbances can lead to serious complications, including kidney failure, cardiac arrhythmias, and even death.

Fortunately, most dogs recover quickly from minor dehydration if given adequate water to drink. However, in some cases, especially if the dog has been vomiting frequently or having frequent, watery stools, they may need to have lost electrolytes replaced as well. One way some dog owners try to accomplish this is by giving their dog an electrolyte drink such as Pedialyte. But while this may be a good approach for humans, it’s unclear whether Pedialyte is good for dogs.

Pedialyte, an oral electrolyte replacement drink that has been sold in the U.S. since 1966, was originally created as an affordable way to maintain hydration and electrolyte balance in children suffering from vomiting and diarrhea. Invented by Dr. Gary Cohen of Swampscott, Massachusetts, and manufactured by Abbott Laboratories, the solution is based on a formula developed by the World Health Organization to treat children suffering from acute diarrheal diseases, which are a major source of childhood mortality in the developing world. In the U.S., Pedialyte was originally sold only to hospitals and recommended for the prevention and treatment of dehydration in kids.Then, in the late 1960s, it became available over the counter and was popularized by pediatricians as a therapy for children suffering from an assortment of maladies, from G.I. disturbances, to food poisoning, to too much time in the hot sun. Pedialyte was first developed to help rehydrate infants with gastrointestinal illnesses that caused vomiting and diarrhea.

Today, Pedialyte is popular with pediatricians and parents of young children, as well as teenagers and adults. Although Abbot still recommends that it be used “under medical supervision” it is widely available over-the-counter and is a favorite of many athletes, who consume it as a “sports drink.” Thanks to an aggressive marketing campaign by Abbot back in 2015, It has also been adopted by college kids (and many adults) as a “hangover cure.” According to Abbot, it is safe for most people, with the exception of some with diabetes or kidney disease.

Pedialyte is available in several formulas as well as in powder form. All contain a significant amount of sugar (between 6 and 12 grams per 12 fluid ounces or powder pack), and the following electrolytes:

The Importance of Fluid and Electrolyte Balance

As most of us are aware, water is essential to virtually all of the body’s functions. Water transports essential nutrients into the cells, aids in digestion, and plays an important role in maintaining body temperature within safe parameters. When a dog (or a person) loses more water than they take in over even a short period of time, they begin to dehydrate, or quite literally, dry out. According to the American Kennel Club, some signs that this may be happening to your dog include: Another effect of dehydration in dogs is that the levels of important electrolytes may begin to change.The specific electrolyte imbalances that may develop depend to a large extent on what brought the dehydration on. For example, if the dog is experiencing vomiting and diarrhea, he is likely to have deficits in sodium, potassium and chloride. Conversely, dogs with heat exhaustion or heat stroke  — a life threatening condition in which the body can no longer cool itself —  may have dangerously high levels of these same electrolytes in their blood. For this reason, it is very important that a dehydrated dog receive veterinary care. Blindly treating a dog with Pedialyte or any oral electrolyte solution without knowing what their blood chemistry shows can be a very dangerous move. If the dog is willing to drink fluids and is able to keep them down, plain water is a far safer choice.

If your dog is mildly dehydrated and is otherwise well (for example, she was outside exercising in the heat for too long), offering her water and watching to see if she improves is a reasonable choice. Dogs are very sensitive to even minor changes in fluid status, so a healthy dog should improve markedly after drinking enough water to slake her thirst. Most healthy dogs need about an ounce of water per pound of body weight per day, and a dehydrated dog will need a little bit more. If your dog appears slightly dehydrated, give her plenty of water to drink and watch her carefully to see if she improves.

Correcting dehydration in a sick dog, on the other hand, is a job for your vet. As mentioned previously, giving the dog Pedialyte or another oral electrolyte solution might be safe. But if the dog’s potassium or sodium level is elevated for any reason, giving him a drink containing electrolytes can have serious consequences. This is especially true if the dog is elderly, pregnant, lactating, or has underlying heart or kidney disease. Because of relatively its high sugar content, Pedialyte would also be contraindicated in a diabetic dog.

After the vet evaluates your dog, she will decide on the best way to rehydrate her. If the dog isn’t vomiting and her blood work is near-normal, she may recommend Pedialyte or an electrolyte drink like Hydrade Electrolyte Supplement by Thomas Labs. Rice water can also be helpful, especially for a dog who is having frequent diarrhea. It doesn’t contain any electrolytes, but has the benefit of firming up loose stools. Follow the vet’s recommendations about how much and how often to give these to your dog.

For a dog who is mildly dehydrated and vomiting but appears otherwise well, the vet may give subcutaneous fluids as opposed to trying the oral route.  For this procedure, the vet or a vet tech will insert a medium-sized needle under the skin, usually between the shoulder blades. She will then attach some sterile tubing to the needle and the other end to a bag of IV fluid and drip a predetermined amount of fluid into the subcutaneous space, forming a lump. The exact type of fluid used will depend on your dog’s condition, but it will usually contain a mixture of sterile water, dextrose and electrolytes. The fluid will be absorbed slowly, so this is not a good choice for a very sick or very dehydrated pet. However, it is a great option for dogs with chronic kidney disease because pet parents can learn to do it at home. Severely dehydrated dogs or dogs in whom the underlying cause of dehydration isn’t clear may need intravenous fluids to recover.

Source:Gus Was in the Hospital by Logan Ingalls License: “CC BY-ND 2.0

If your dog appears moderately to severely dehydrated or is presenting with symptoms of shock, your vet will almost certainly opt to give fluids and electrolytes through the intravenous route. To accomplish this, she will insert an IV catheter into a vein in one of the dog’s legs. The area will be shaved  first, both to allow better visualization of the vein and to minimize the risk of infection while the catheter is in place.

Administering IV fluids is a life-saving procedure, but it does come with a few risks. Catheters can become kinked or obstructed, and the amount and rate of fluids administered must be monitored carefully to prevent fluid overload. For this reason, your vet will likely want to keep your dog in the clinic for observation for some time, or even admit her for an overnight stay. During this time, the vet may also check her electrolyte levels and blood pH to ensure they are returning to normal, and do other tests if the reason for the dehydration is unclear.

Prevention Is Better than Cure

Obviously, preventing your dog from becoming dehydrated is preferable to playing catch-up after the fact. The simplest way to accomplish this in a healthy dog is to make sure she has plenty of fresh water to drink, and not allowing her to overexert herself in the heat. As you are probably  aware, dogs don’t perspire like humans do; the only way they can cool themselves is to pant. So if your dog is panting heavily on a hot day, take it as a sign that she is becoming overheated and bring  her to a cool spot and give her some water to drink. Playing with your dog outside on a summer day is fun, but make sure to let her take frequent break in the shade.

With that being said, preventing dehydration isn’t always possible. A dog with poorly controlled diabetes, for example, will urinate in large quantities as the kidneys try to rid the body of excess glucose. Even if the dog is drinking a great deal, this excess urine output usually causes fluid and electrolyte imbalances to occur. Similarly, a dog who is vomiting and having diarrhea may become dehydrated no matter what the pet parents do. In these cases, or in any situation where a dog exhibits signs of dehydration and you’re not sure what the problem is, don’t resort to DIY remedies like Pedialye. Be a prudent pet parent, and call your vet. My Best Friend/Cleo's Fair Share
Buy on Amazon
Bestseller No. 3 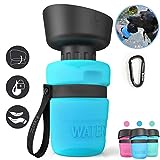