Loyal, versatile, and downright adorable, the Cardigan Welsh corgi may be the lesser-known of the corgi breeds, but they are every bit as deserving of a fanbase. These squatty dogs are surprisingly athletic and capable of accomplishing just about any task that is given to them.

So why aren’t they more popular? Keep reading to find out more about this unique and ancient breed and what it takes to own a Cardi. 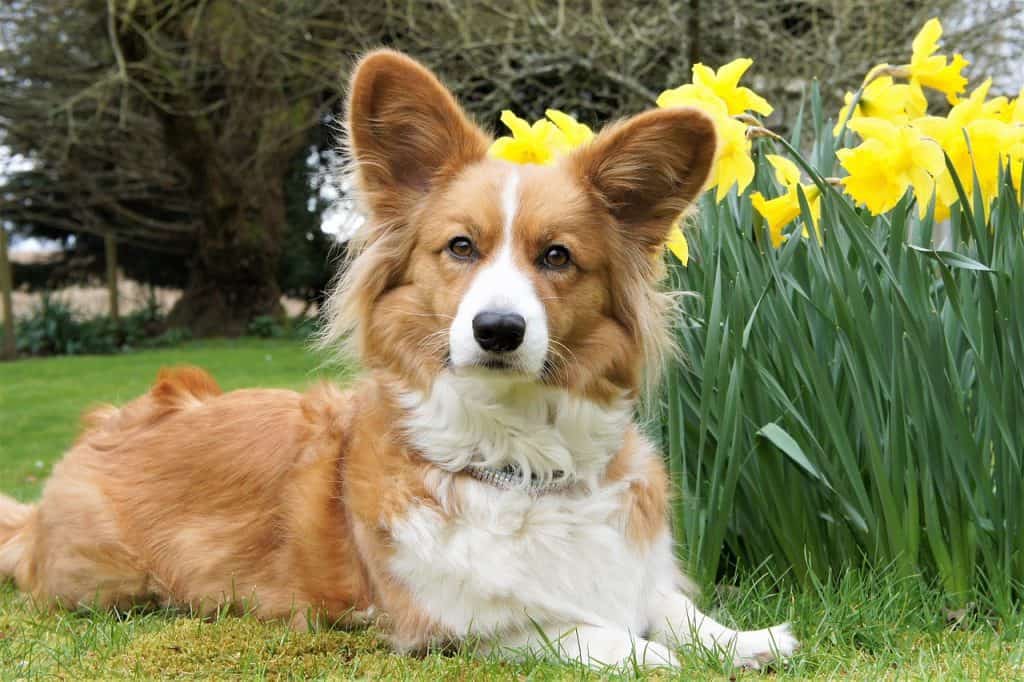 Though less popular than the Pembroke, the Cardigan is actually the older of the two breeds. Their sweet nature and ability to adapt to all types of lifestyles make them a unique dog that really should be more well known.

The History of the Cardigan Welsh Corgi

The Cardi is one of the oldest British dog breeds, with the first accounts of these pups dating back over 3,000 years.

In ancient times, the Celts migrated from Central Europe to what would become Cardiganshire, Wales. They brought with them short, stalky working dogs known as corgis or ci-illathed– “yard-long” dogs.

These utilitarian animals were used for a variety of farm tasks, including guarding the home and livestock and chasing away neighboring herds to preserve the grazing fields for their owner’s own cattle.

The Welsh Cardigan, thought to be derived from the same line as the Dachshund, was perfectly built for these tasks. They were short enough to evade the strikes of kicking cattle, athletic and bold enough to chase away wolves and other predators, and small enough to feed without costing the farmer a fortune.

These original dogs were a similar size and shape to today’s Cardis but with drop ears instead of erect.

About 1,000 years ago, the Vikings invaded Wales, bringing with them spitz-type dogs. Inevitably, this new blood made its way into the Cardi lineage, creating what would later become known as the Pembroke Welsh corgi. This smaller dog had erect ears, a softer coat, and, often, a bobbed tail. 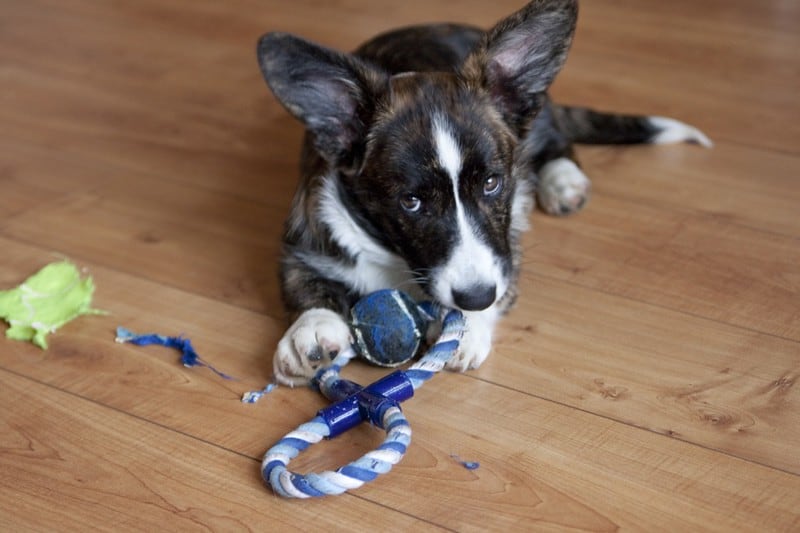 Crossing corgis with European cattle dogs not only added more herding instinct, but it also added a wider color variation to the breed. Red, merle, and brindle Cardis became more common after this period. “Gijs” by Stijn Bokhav / CC BY-NC 2.0

These two types of corgis remained distinct for centuries, with the Cardi seeing some cross-breeding of its own that further distinguished it from the Pembroke Welsh Corgi.

As cattle raising became more popular in the area, the need for a dog that could successfully drive cattle to market and to the fields became more important. The versatile corgi was crossed with different heeler-type breeds to add even more herding instinct. This is likely where the modern Cardi’s erect ears come from.

By the beginning of the 20th century, the corgi breed was well known across Europe. At the time, both corgi types were considered one breed in the show ring. But, in 1934, this finally changed and the Cardigan Welsh officially became its own breed.

It was around this same time that the first Cardis came to the USA. Not long after, the breed was officially recognized by the AKC.

Today, the Cardi still remains much less common than the Pembroke, despite a winning personality and adaptable nature. Those that do know the breed often become obsessed with this tailed-version of the corgi. Few are still used for their original utilitarian purposes, but many companion Cardis participate in doggy sports and recreational herding competitions to showcase their wide range of instinctual skills.

The Temperament of the Cardigan Welsh Corgi

Because of all the jobs the Welsh Cardigan was expected to do as a farm pooch, they have developed incredibly adaptable temperaments.

Their use as herd guardians and property guard dogs means they are adept at alerting their owners to trouble. But, because they were also expected to be gentle and affectionate with family, these long-dogs are anything but fierce. They can be somewhat standoffish with strangers, but usually warm up over time. 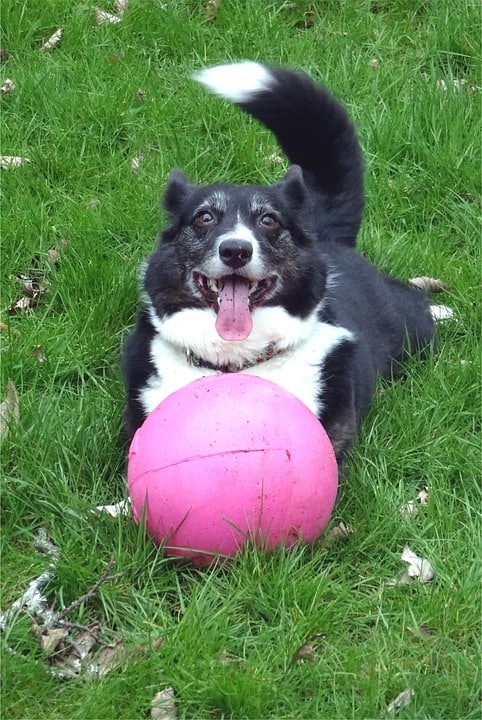 The Cardi is a happy breed with a love for fetching, adventure, and curling up on the couch. They love their humans and as long as you put in the time, they make incredible pets.

While they do have enough herding instinct to drive cattle out on the ranch, they are not nearly as nippy and chase-happy as many shepherds and heelers. Because of this, they tend to be a much better choice of herding breed for families with young children.

The exercise needs of a Cardi also vary depending on their situation. This is a dog that is capable of running through the open fields for miles without end. But they are equally capable of lounging around on the couch all weekend. They tend to adapt to the lifestyle of their owners, making them the perfect choice for city dwellers and ranch owners, alike.

Overall, the Cardi is a social breed that reserves its greatest affections for family. They are just as happy chasing cattle through the fields as they are taking a calm stroll around the neighborhood.

Overall, the Cardigan is a healthy breed with only a few noteworthy health issues that prospective owners should be aware of:

Like the dachshund, the Cardi is at a higher risk for back injuries than other breeds. It is important that owners take special care to assure their dogs do not engage in activities that could lead to spinal injury.

Something as simple as jumping off the couch or slipping on the stairs can cause severe injury to a Cardi. Investing in a solid set of doggy stairs to help your pup get safely on and off the furniture is a must if you plan to let them snuggle with you in bed or on the couch. 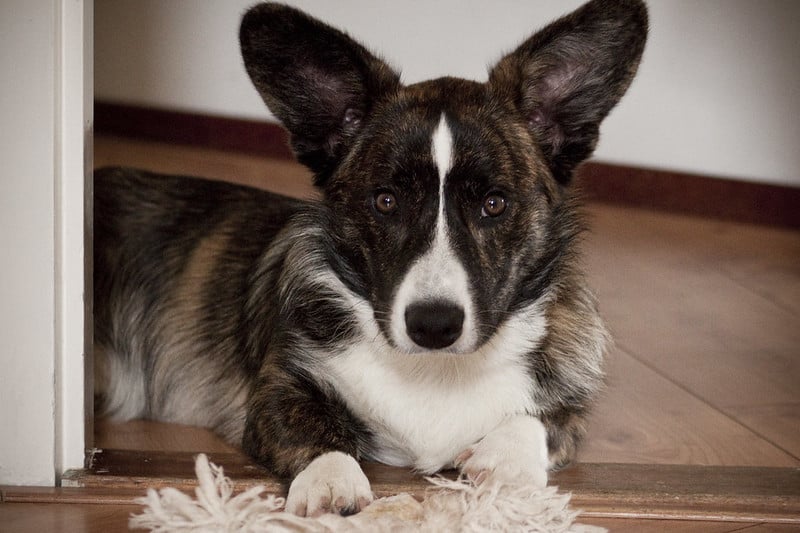 Back problems aren’t always caused by an injury. Overfeeding a Cardi can lead to obesity which can cause strain on that long back and lead to issues. These dogs do tend to overeat if given the chance, so it is up to the owner to make sure they don’t eat more than they burn. “Gijs Welsh Corgi Cardigan” by Stijn Bokhav / CC BY-NC 2.0

No-slip runners on any staircases are also a good idea. But your pup will still need to be reminded to go down the stairs slowly. This can be especially challenging with a young puppy, so baby gates are recommended.

If your Welsh Cardigan does appear to have a back issue, it is important that you take them to the vet right away. Any damage to the spine needs to be treated immediately to avoid long term injury or even paralysis.

Do Cardigan Welsh Corgis Do Well With Children and Other Pets?

Like all herding breeds, some care should be taken with Cardis and children. These dogs tend to really enjoy the company of young humans, but sometimes their herding instincts can cause issues. This is especially true when kids run or roughhouse.

That said, the Cardi is less likely to chase and nip than many herding breeds and is a great choice for most families with children.

In general, Cardis also do well with other dogs. They enjoy wrestling with their puppy friends but tend to get most excited about running along behind them and barking like a typical herder. Their squat size makes them great playmates for both large breeds and small. Just be careful of rough play with heavy companions, as this could lead to a back injury.

With regard to both children and other dogs, the key is to socialize your Cardi puppy with all types of people and animals early on. Puppies that have positive interactions with kids and dogs when young are much more likely to be highly sociable as adults.

Early socialization isn’t just important for assuring your Cardi gets along with children and pets. It also helps these dogs to mature into more confident, better-behaved adults who are much less likely to develop fear issues. “Aren’t I cute When I’m Dirty” by Zara Gonzalez Hoang / CC BY-NC-ND 2.0

This same thing is true of Cardis and other pets. Typically, these dogs aren’t overly interested in small pets or cats (so long as they aren’t actively running). But to be sure your dog will get along well with all the pets in your household, introducing them to a variety of animals as a puppy is a must.

What to Consider Before Bringing Home a Cardigan Welsh Corgi

Think this lesser-known corgi is the right pup for you? Here are a few more things to consider before bringing home a Welsh Cardigan.

As we mentioned above, the Cardi is a unique dog in that it is capable of adapting to a wide range of lifestyles from largely sedentary to extremely active. That said, this breed, like all dogs, does require some exercise for both mental and physical health. This is especially true during adolescence when your Welsh Cardigan is likely to have excess energy to burn.

All Cardis love a good walk around the neighborhood and this is a great start for wearing them out. Hiking, off-leash romps in fenced fields, and even short runs also work well. Most Cardis also really enjoy playing fetch and can become quite ball obsessed. Doggy sports are also another great outlet for the Cardi drive. Because of their short legs and love for fetching, these dogs are prized on flyball teams as they allow for lower jumps for the rest of the pups.

The Cardi is plenty intelligent and can be trained in basic obedience, tricks, and even recreational herding. Many are quite food motivated and almost all are ball motivated. Keep training sessions short and exciting to avoid your Cardi getting distracted or bored.

As with most breeds, training should start early and remain consistent throughout their adolescent years. Any undesired herding behavior or nipping should be addressed early to avoid long term issues. 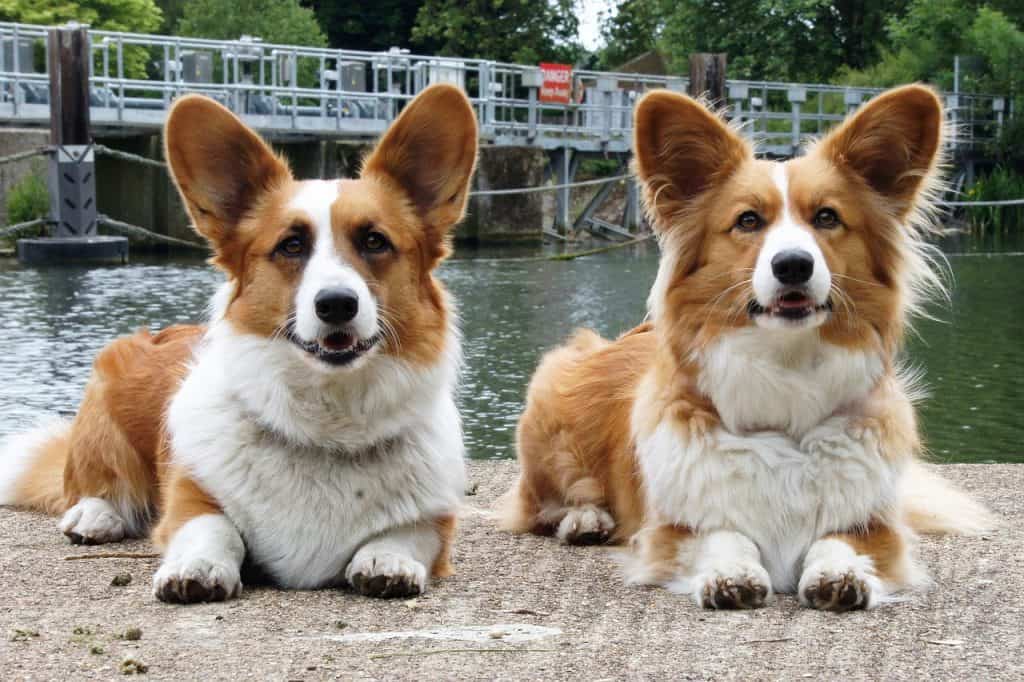 Most Cardis have a thick medium coat, but very slick, short coats and longer feathered coats can also occur.

The Cardi has a thick, medium-length double coat that requires weekly brushing to look its best. These dogs are relatively clean and have little to no odor. Bathing is typically only necessary after muddy outings or during periods of heavy shedding.

Many dogs with dwarfism have uneven wear patterns on their nails, so it is important to keep up on nail trims. Daily teeth brushing is also a must.

Cardigans will do well on most high-quality commercial or home-prepared diets. They are somewhat prone to obesity so care should be taken to balance portion size with activity level. Treats and table scraps should also be kept to a minimum to avoid extra pounds.

Cardigans are rarer than other breeds, a fact that is apparent in the average puppy price. A purebred Welsh Cardigan can cost anywhere between $1,000 to $2,900, depending on the line and coloring.

As with any breed, it is important to do your research before picking a breeder. A reputable breeder should let you meet the mother or breeding pair, let you see the facility, and be happy to provide documentation on all health tests that have been performed. 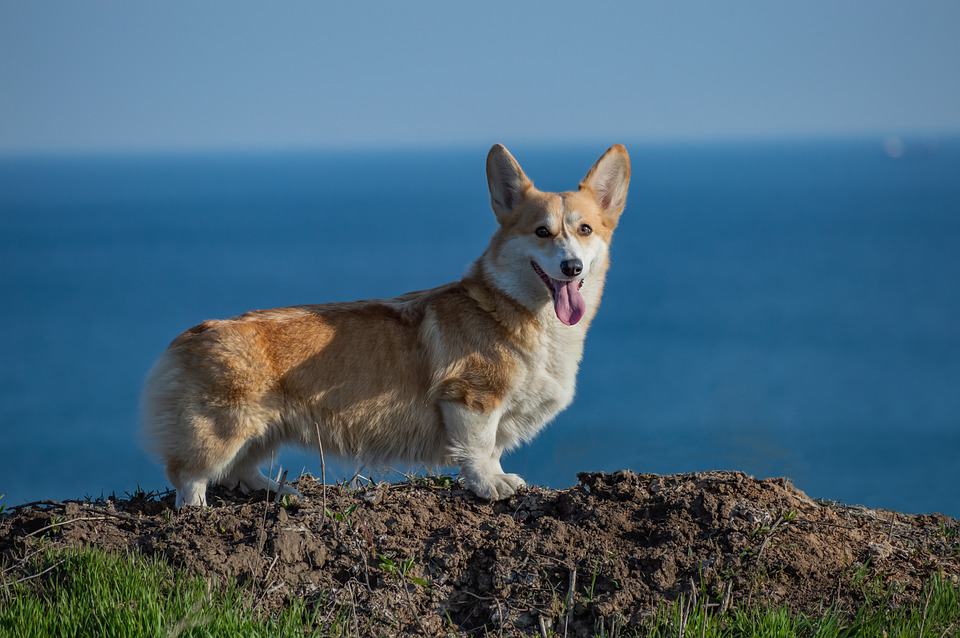 The Pembroke corgi, pictured above, is easily distinguished from the Cardi because of their lack of a tail. Pembrokes also tend to have more petite facial features, smaller ears, and are smaller overall than the Cardi.

Now that you know what it takes to own a Cardi, here are some fun facts about the breed.

Not sure the yard-long dog is right for you? Here are a few more breeds to consider. 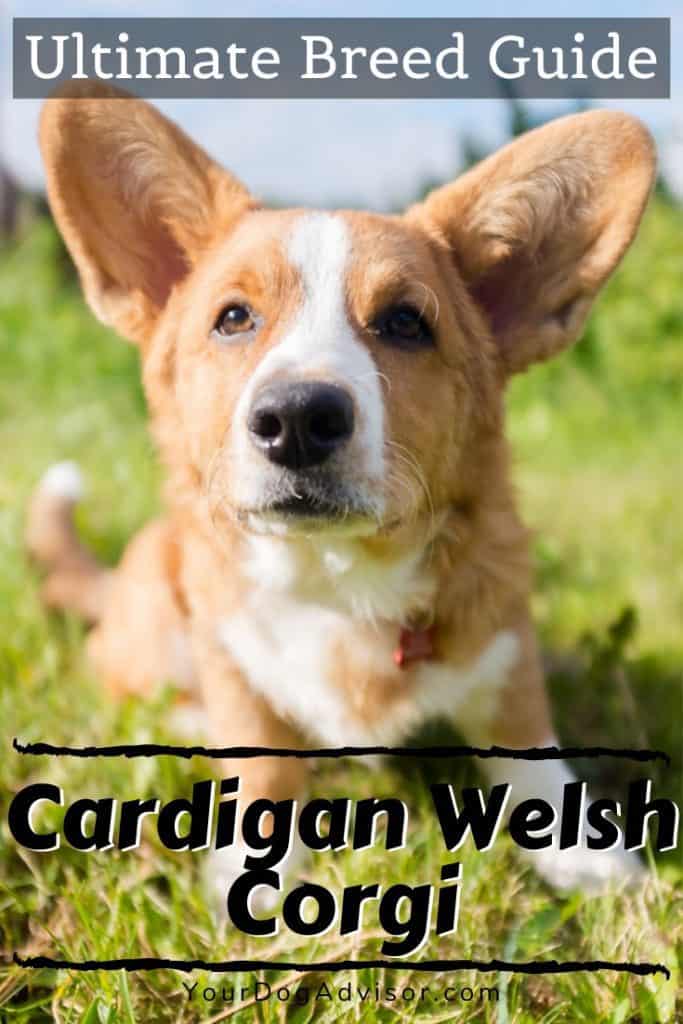