When we brought home my Jack Russell Terrier, Jake, he got into everything. He chewed through every toy we bought him and went dumpster diving in our trash can when we weren’t home. Once, he even ate a whole tube of Neosporin and left the chewed-up container for us to find.

We didn’t want to put him in a crate while we were gone because Jack Russells have so much energy. We were afraid that not being able to run or explore would exacerbate the problem. So, we tried confining him to one room, where he could not get into the trash. He chewed up the door to that room. 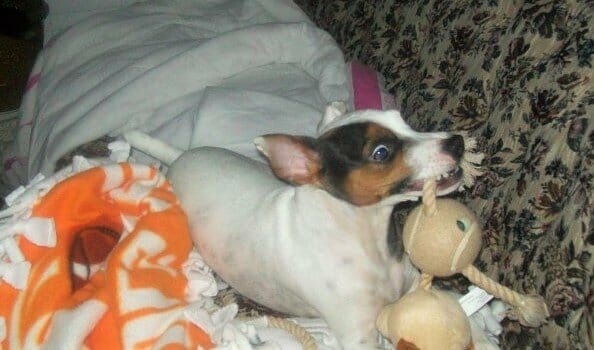 The adorable face that could chew through walls.

Jake continued his destructive behavior until he got good at playing fetch. Fetching gave him a purpose and an outlet for his excess energy. Some dogs hunt; others lead the blind. In his prime, Jake would chase his tennis ball as often as I would throw it.

Playing fetch is a great way for your dog to get fresh air and exercise. Chasing the ball is good cardiovascular and aerobic exercise. The training that playing fetch requires and the scents your dog will find outside are good mental stimulation. Not to mention that you get to spend quality time with your dog every time you play together. I like that playing fetch meets so many of my dog’s needs in one activity.

Jake is now 13 years old and is so lively that people often mistake him for a puppy. There are many factors that predict a dog’s overall health, but I believe that a lifetime of regular exercise helped keep his mind and joints young. He does not have any mobility issues and is still up for the occasional run or round of fetch.

Things to consider before you begin

It is easier to teach puppies and younger dogs how to fetch, but it is possible to teach them at any age. Keep your dog’s age, breed and the temperature outdoors in mind when you choose how long each fetch session should be. Play in a shady spot, if possible. Always take your dog indoors if it begins to pant rapidly or show other signs of heat stroke.

It is helpful to talk to your vet about how much exercise your specific pet needs, since it will vary based on breed, age, and health.

It is also important that you use positive reinforcement only, so your dog does not associate negative feelings with playing fetch. 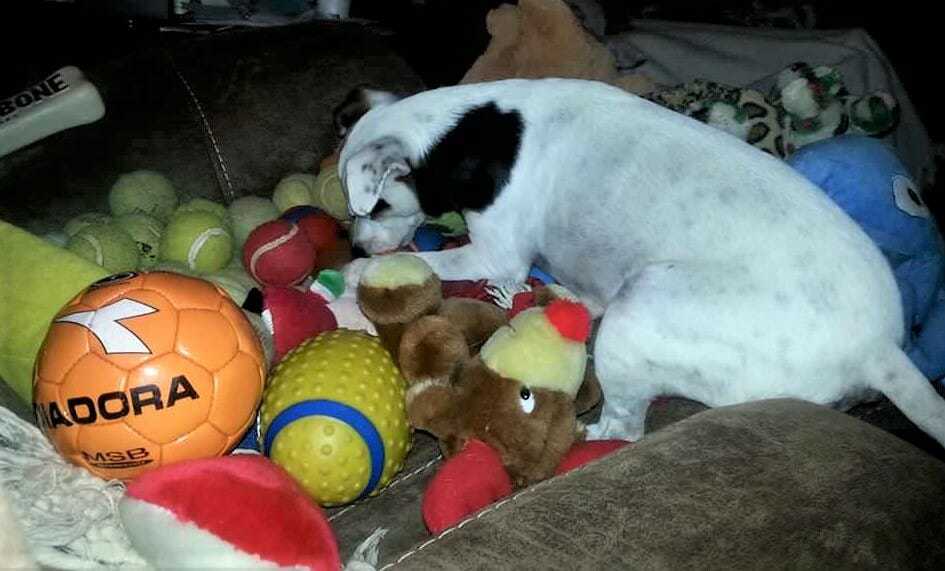 Start with a toy your dog likes. Jake is obsessed with tennis balls and we even found some that glow-in-the-dark and squeak. Some dogs may prefer a Frisbee or a squeaky toy instead. It will be much easier to get your dog to fetch a toy they are excited about.

Make sure that the toy is designed for dogs and is durable, so that it won’t get broken into pieces that are a choking hazard. Sticks are not a good choice because they can break off into splinters and cause internal injuries or infections.

Decide if you want to train your dog to fetch indoors or outdoors. I trained Jake to fetch outdoors because there is more space. Outside, I don’t have to worry about him knocking something over or running into something. He has trouble stopping suddenly with his little legs and will often skid or run past the ball before he can stop. The skidding can be dangerous, considering that we have hardwood floors. Dogs can also get their claws caught in some types of carpet, causing injury.

However, some dogs learn better indoors because there are fewer distractions. Your dog is also less likely to get overheated indoors and cannot run away. This option is ideal if your yard is not fenced in or you have an escape artist.

3. Associate the toy with rewards

Play with the toy in any way they want. Then, wiggle the toy out of your dog’s mouth, being careful not to damage their teeth, and throw it. Many dogs will naturally chase the toy.

TIP: If your dog doesn’t chase the toy naturally, chase it yourself, bring it back and try again.  Jake seems to learn behaviors more quickly when he sees them modeled first. You do not need to chase the toy on all fours or carry it in your mouth.

Reward your dog for chasing the ball, even if they do not bring it back. The reward you use should depend on what motivates your dog. I motivated Jake to fetch by giving him verbal praise. Other dogs may need a treat or a scratch behind the ears to make it worth their while. You can also use a clicker.

TIP: Start by throwing the toy a short distance and throw it a little further after each successful chase.

After the first throw, play with the toy some more and throw it. Repeat and gradually cut out playing with it until you are just throwing the toy each time you get it back. Let your dog get the hang of chasing the toy before you move on to the next step. 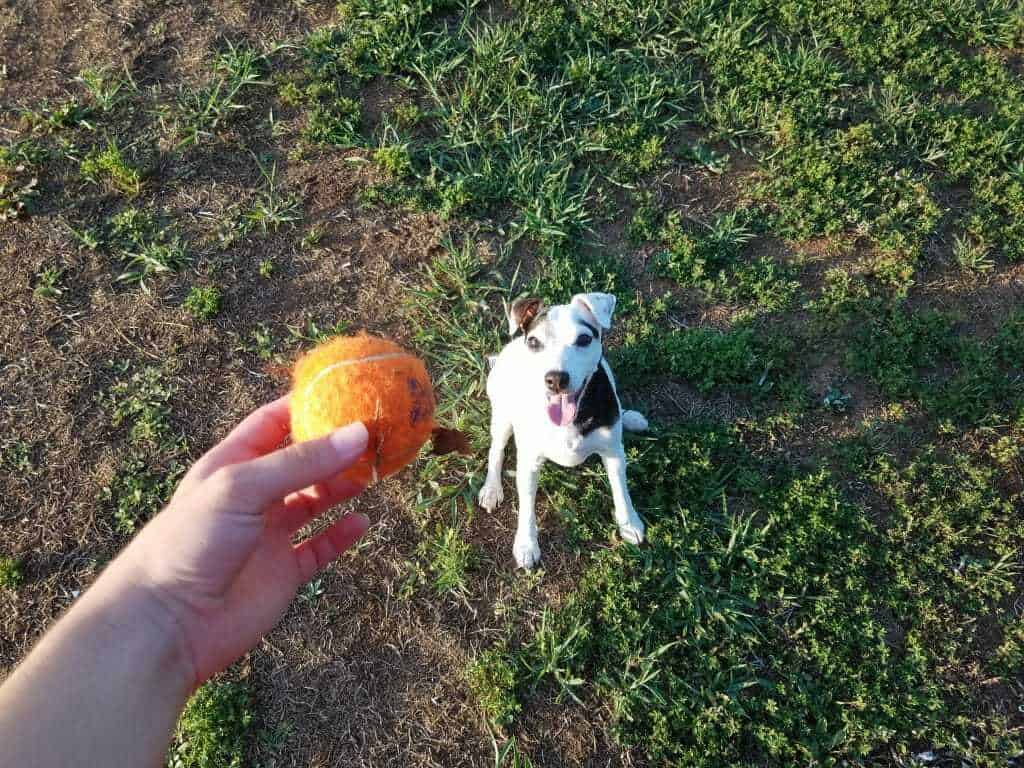 Jake looks at the ball with the same enthusiasm he looks at food with. Fetching is its own reward to him by now.

4. Get your dog to bring it back

Throw the toy and let your dog chase it. When they pick the toy up, start calling them. Reward them the first few times they come back, even if they drop the toy before they get back to you.

If your dog does not respond to being called, use second toy that they like to encourage them to come back. Toys that squeak work best for this step, because it will get your dog’s attention. Do not use a squeaky toy if your dog is afraid of the sound. Then, throw the second toy and pick up the first on while your dog is chasing it

TIP: Again, it may be helpful for you to model the trick.

After they get the hang of chasing the toy and coming back, with or without it, only award treats when your dog brings the toy back to you. You can encourage them to bring it back by pointing to the toy and saying its name. It may also be necessary to bring the toy back yourself a few times and place it in the spot where you were standing before you reward your dog.

TIP: Getting your dog to bring the toy back will be easier if your dog already knows the toy’s name. Jake knows that when I say, “Ball?” that he is supposed to fetch me his tennis ball.

It may be helpful to attach a long string to the toy, so you can pull it back to you each time your dog chases it and does not bring it back. Do not reward your dog until the toy is at your feet. Doing so will help them understand that the toy has to get back to you before they are rewarded. It will also prevent your dog from running away with the toy. 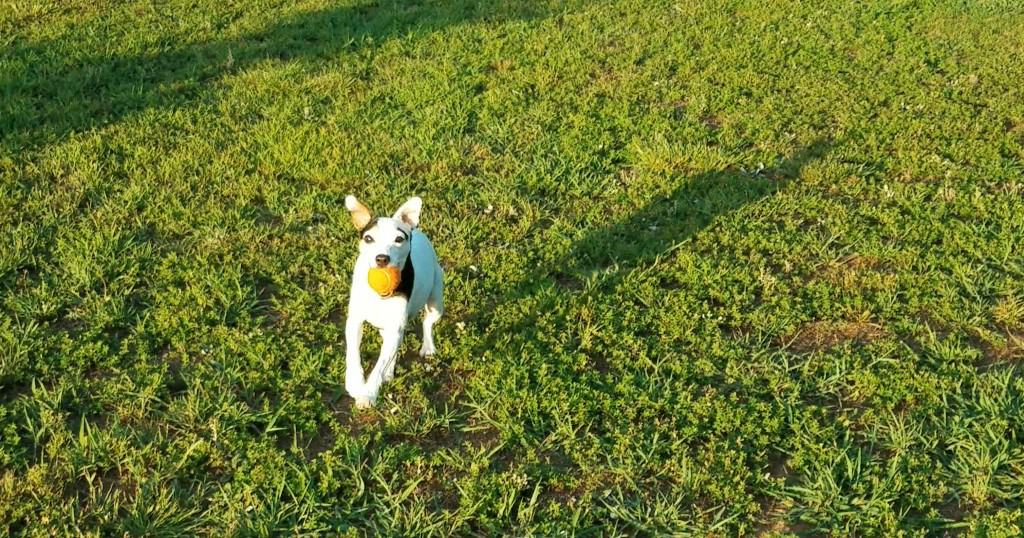 Jake bringing the ball back

5. Teach your dog to drop it

This was the hardest part of fetching for Jake to learn. Have your dog fetch the toy. Then, use a command, such as, “Drop it” and point towards the ground. In my experience, dogs respond better to commands when you include a gesture to illustrate what you want them to do.

Follow the command by tugging on the toy and gently pulling it toward the ground. Be careful not to pull hard enough to damage your dog’s teeth. If you are able to free the toy from your dog’s jaws, place it on the ground and reward your dog before you throw it again. The key to this step is repetition. 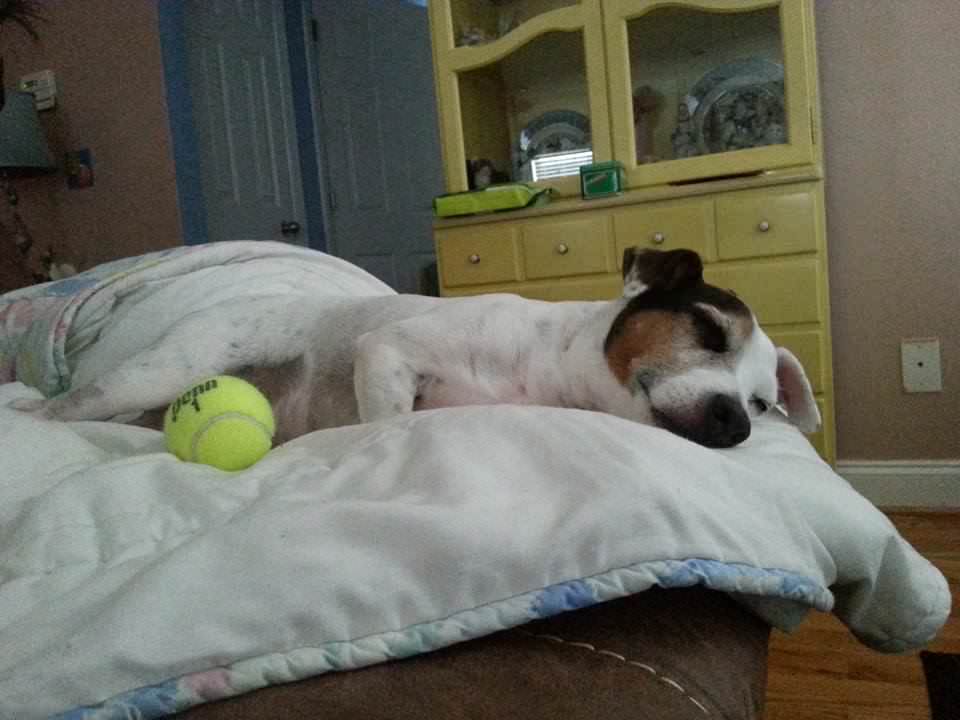 Jake resting with his tennis ball after a tiring fetch session.

Taking it a step further

For most of us, the promise of improving our dog’s health and their relationship with us is enough to make us want to give fetch a try. It’s just something we do for fun and it never leaves our backyards. But others pursue fetch professionally.

Cities all over the world, primarily in the U.S. and Canada, have Toss and Fetch clubs. The clubs have leagues each season to determine which dog and handler team is the best. The best teams will have a chance to compete in the Worldwide Championship.

You can also teach your dog other sports that use fetch, once they master it. In flyball, dogs fetch an object, but they have to jump over hurdles, as well. In dock diving, dogs jump into a pool to retrieve an object.

Wherever fetch takes you and your dog, do not get discouraged and remember to use positive reinforcement. It will take a few sessions for your dog to learn new tricks, maybe even a few weeks.The important thing is that your dog is getting exercise, having fun and bonding with you. 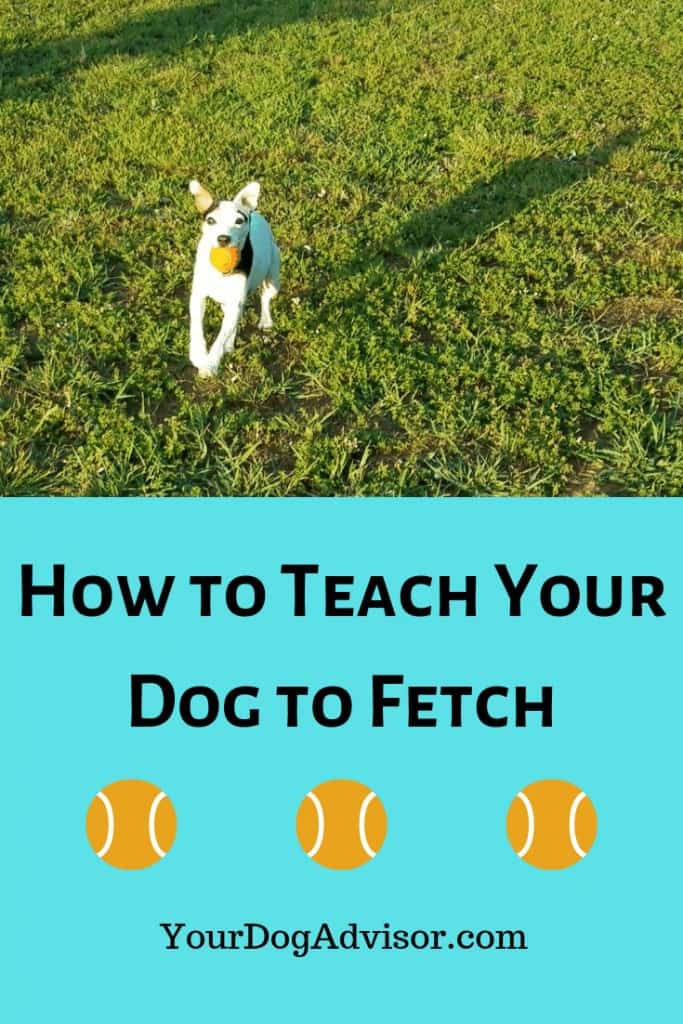