When we first brought our Alaskan shepherd, Eira, home last November, I jumped into training her right away. She was sweet, cuddly, and extremely loud — a problem for my son with sensory processing special needs — so I figured I could train her early. It was essential to get her well trained before she grew big enough to jump on my son and knock him over (he’s three).

At first, I spent time training Eira every single night after my son went to bed. She picked up commands quickly: before long, she knew sit, down, stay, and even come. I could let go of her leash when we were still a ways from the house, ask her to stay, walk a ways in front of her, and then say “come!” and she’d come sprinting toward me. 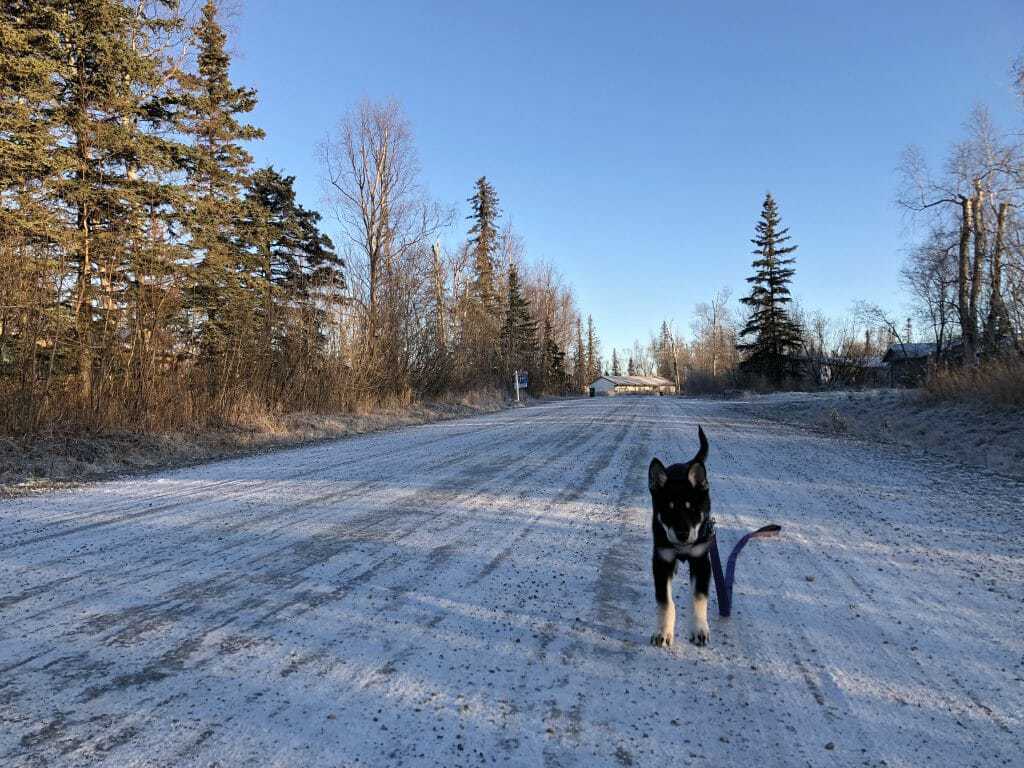 Eira as a young puppy, sprinting toward me on a ‘come’ command. I was so proud!

She was well on her way to being a well-trained family dog.

And then, Christmastime came. Most Christmases, my family heads down to “the Lower 48,” AKA the United States mainland, to visit our extended family. That year, we would be gone for two weeks. Before we’d bought Eira from her breeder, we had set up plans with our neighbor. Our neighbor would keep Eira at her house and we would pay her a small fee to care for her for two weeks. The neighbor said she loved puppies and looked forward to caring for Eira. I left her detailed instructions, including notes on how Eira needed to play outside at least once a day to get her energy out.

Everything seemed wonderful. My toddler, husband, and I enjoyed the warm, relentless California sun — a treat after a largely lightless Alaska winter. But about three days after we’d left Eira with the neighbor, the texts started to come.

Eira was howling all night, keeping the neighbors awake. (I wholeheartedly believed this one.)

Eira had broken the husband’s glasses. (Believed this, too.)

Eira was jumping up on the counter and turning the stove on. (Not so sure about the veracity of this claim.)

To attempt to solve these problems, the neighbors had smacked her with rolled-up newspaper and put her in the submissive position — neither of which were things I approved of. I was angry that she’d done this to Eira.

I agreed that Eira needed to go elsewhere. I knew that being smacked with newspaper and put on her back had probably made her nervous and even more behaviorally unsound.

She didn’t have her rabies shot yet so couldn’t go to a kennel. Thankfully, a friend who runs dogs in the Iditarod jumped in to help and brought Eira to her home for the rest of the two weeks. There was some howling, but after a while Eira grew comfortable there and enjoyed playing with the family’s other house dog. 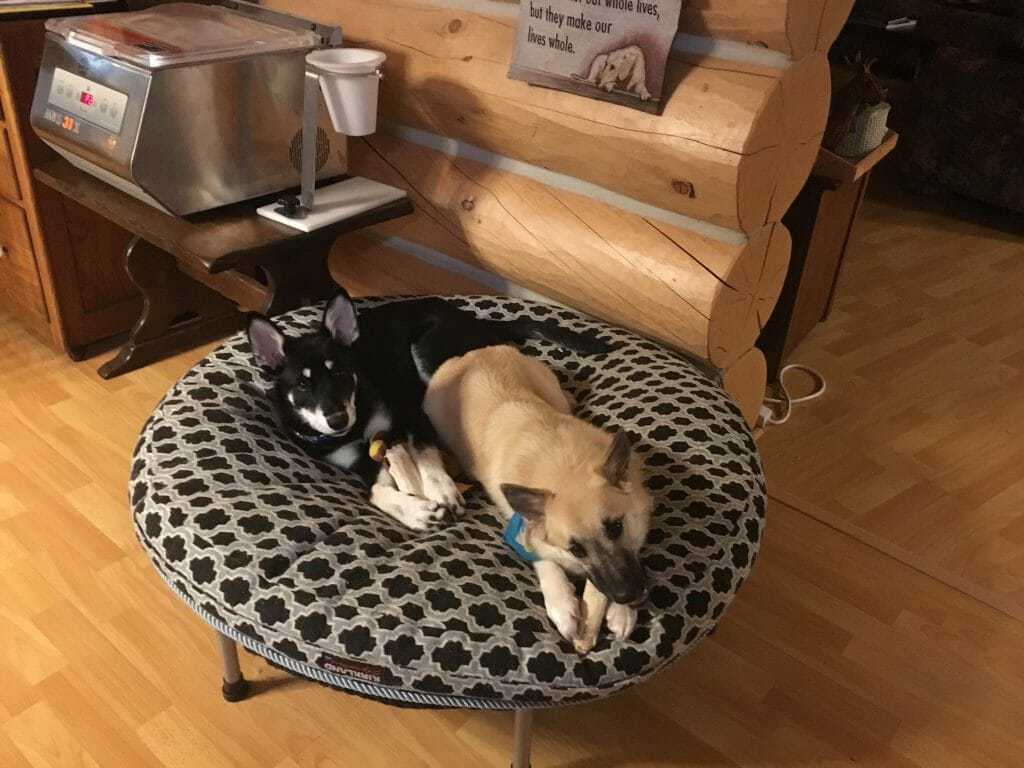 Eira and at the Iditarod runner’s house with one of her dogs.

But when we got home for Christmas, the damage by our neighbors had been done. That, combined with our long absence, meant that Eira had forgotten a lot of her training.

Instead of coming when I called, Eira ran off through the snow and wouldn’t come back unless I coaxed her with giant hunks of burger. It became impossible to leave her off the leash — ever. (Unless she was inside of course!)

And if we’re honest, she never fully got her training back, although getting a Flexi leash helped a lot with being able to let her run somewhat freely and not run off.

Recently, after she got spayed, Eira even forgot her potty training and pooped on our carpet three different times in one week.

Needless to say, we were ready for a new round of training. And that’s where the whistle comes in.

What Is a Dog Whistle for Training?

A dog whistle for training is a special whistle designed for a dog’s ear. It can be loud, like a whistle teachers use to bring their students in from recess. Or it can be a silent whistle, which is quiet to humans and loud to dogs, whose hearing is a lot better than ours! Dogs can hear sounds up to four times farther away than we can, and they can catch higher frequencies (eg, the sound of a silent whistle designed for dogs).

Dog whistles are fantastic for training for several reasons:

What Type of Dog Whistle Should I Buy?

There are a couple different types of whistles you can buy for your dog.

Often used by police dog trainers and officers on duty, these whistles are quiet to the human ear but loud to a dog’s. They’re ideal for police training because they won’t alert a suspect to the presence of a canine officer.

These whistles are also ideal for people who hate the shrill sound of whistles, or who have people in the family with extra-sensitive hearing. Take me, for instance. Because my son is terrified by loud, shrill noises, I train Eira with a silent whistle.

Some trainers claim that a silent whistle won’t do the job as well as a regular one. While I haven’t found that to be true so far, later on in this article we’ll show you our favorite not-silent and silent whistles so you can choose the best one for you and your dog.

Whatever whistle you choose for your dog should be specific to training dogs. The best whistles have adjustable pitch so that you can experiment with different pitches and figure out what your dog responds to the best.

The Most Common Whistle Cues

Eira has such a problem with coming that this is the whistle blast we’re currently focused on. 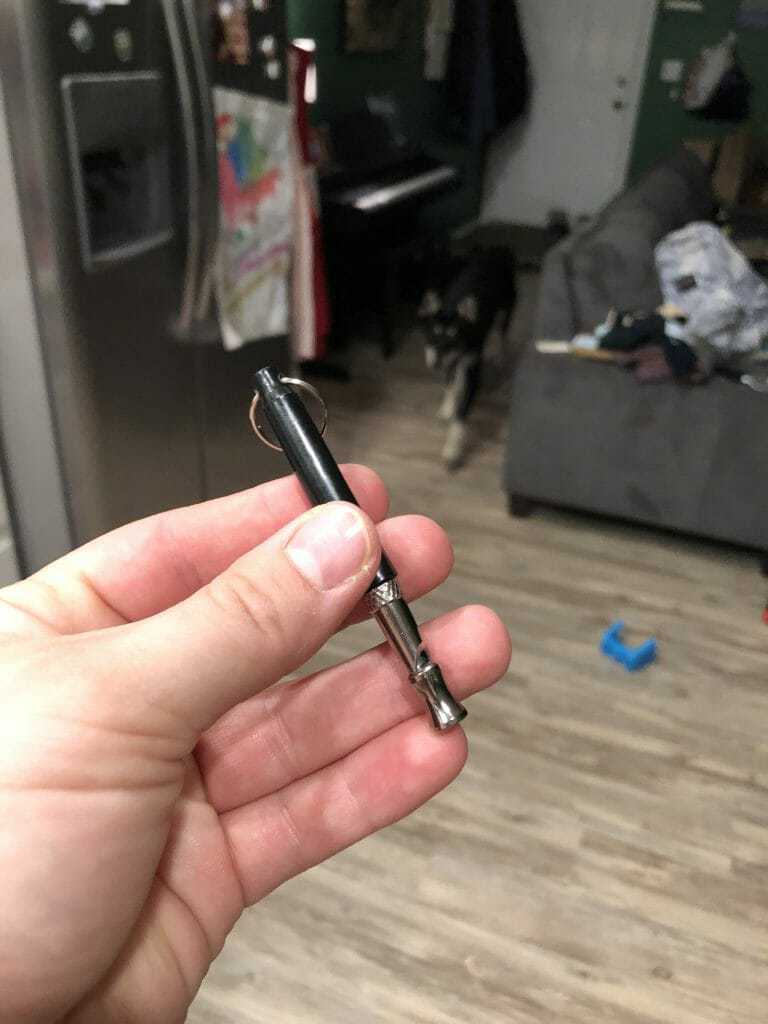 Our “silent” whistle emits a small sound that isn’t annoying to humans but works well for dogs’ ears.

Once you train your dog to come based on the whistle, its three blasts should bring her home from anywhere, near and far, because a whistle’s sound carries much farther than your voice.

Here’s how to train your dog to recall to a whistle.

See how that works? Pretty simple, really, and you need to repeat this positive sequence for about a week, making sure to consistently use three short blasts from your whistle.

You might be asking, “What’s the difference between a long blast and a long trill?” A trill is even longer than a blast. Think several long seconds of steady whistling. That’s what you want to use to train your dog to change direction.

How to Ruin Whistle Training

There are certain things you should understand before you begin whistle training.

Now that you know the basics of whistle training, let’s look at the best whistles on the market.

This ultrasonic whistle is inexpensive and comes in a pack of 2. Made of rust-resistant metal, it also comes with a lanyard so that you can wear it around your neck during training. 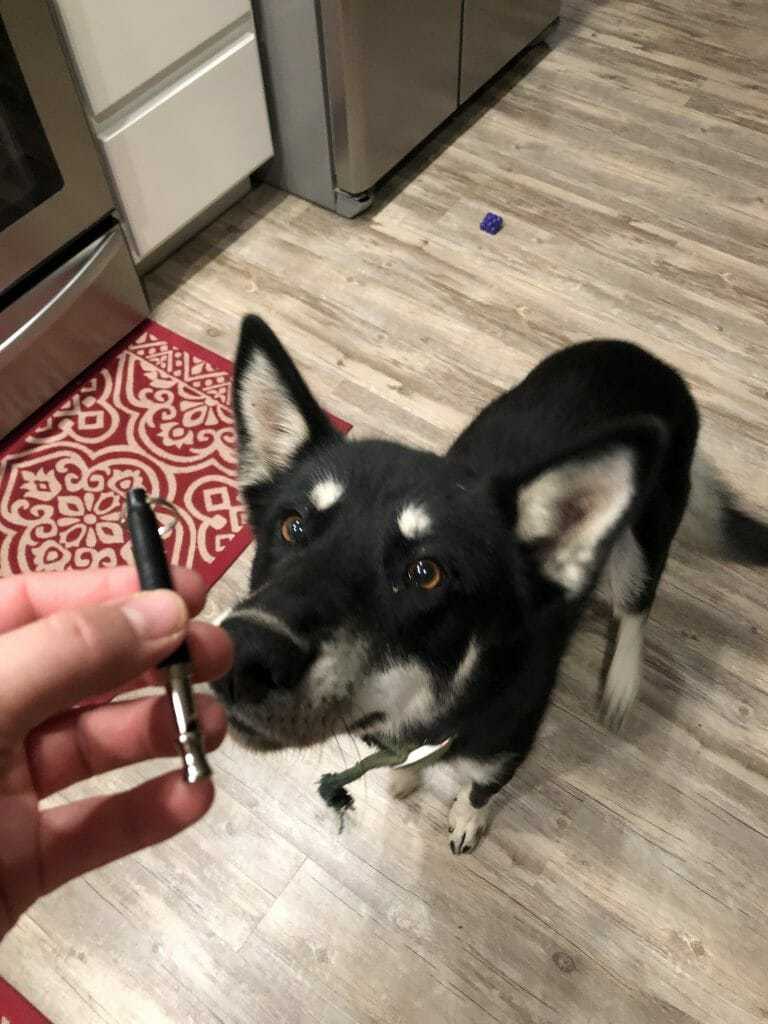 On the product description on Amazon, the sellers talk about the whistle’s power to help your dog stop barking. Remember, this is only true if you TRAIN your dog to stop barking when you blow the whistle. (Use treats and a special whistle that you use consistently to achieve this.) Do not expect to take the whistle right out of the box, blast it, and have your dog stop barking. Nothing is worse for whistle training than you uselessly blowing the whistle at your dog every time she barks. That literally teaches her nothing and becomes a power struggle instead of a positive reinforcement experience.

This sleek whistle is loved by dog trainers everywhere. It’s far less screechy than a whistle for human ears, but it isn’t a silent whistle. There’s no adjustment needed: just unpack the whistle, get your treats ready, and blow. The Acme whistles have fans across the generations, so you can rest in knowing that it’s been a popular whistle for ages when you buy it.

Have you used whistle training for your dog? What did you think? Let us know in the comments! 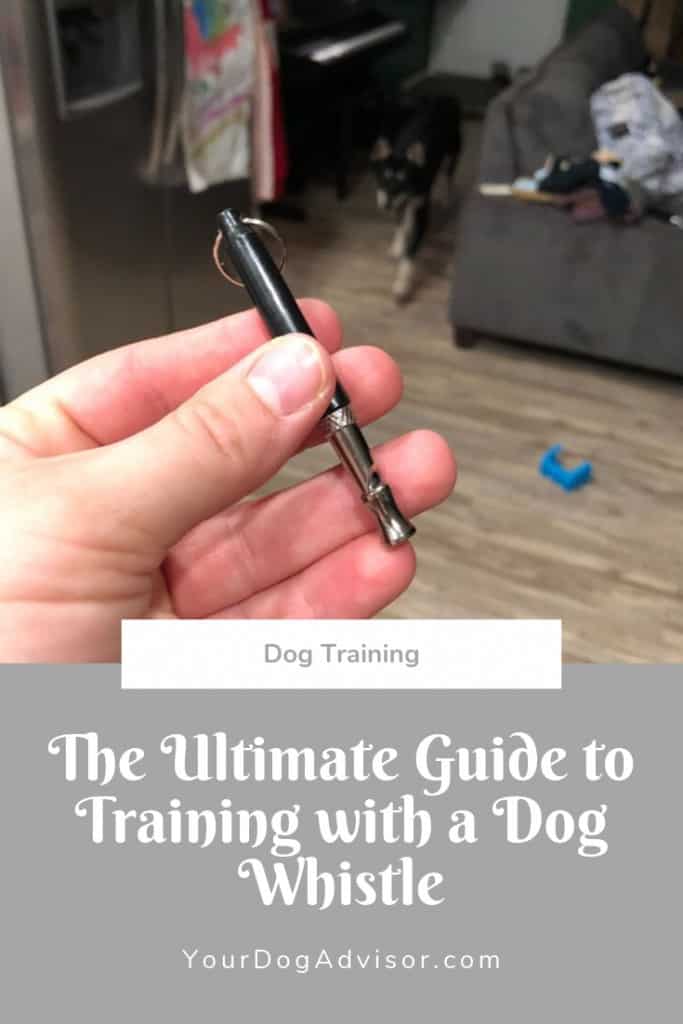