Dachshunds, known as Doxies among their admirers, originated in Germany nearly 600 years ago and have been popular throughout history.  These tiny entertainers consistently make the top breed lists and it’s not hard to see why.  In addition to their adorably pint-sized frames, they are sassy and have a mind of their own.  Although this personality is appealing to many prospective owners, this breed is not without its difficulties.  Doxies can be stubborn and often resist training and housebreaking. With the right amount of patience, consistency, and persistence though, these little hotdogs make fantastic pets. 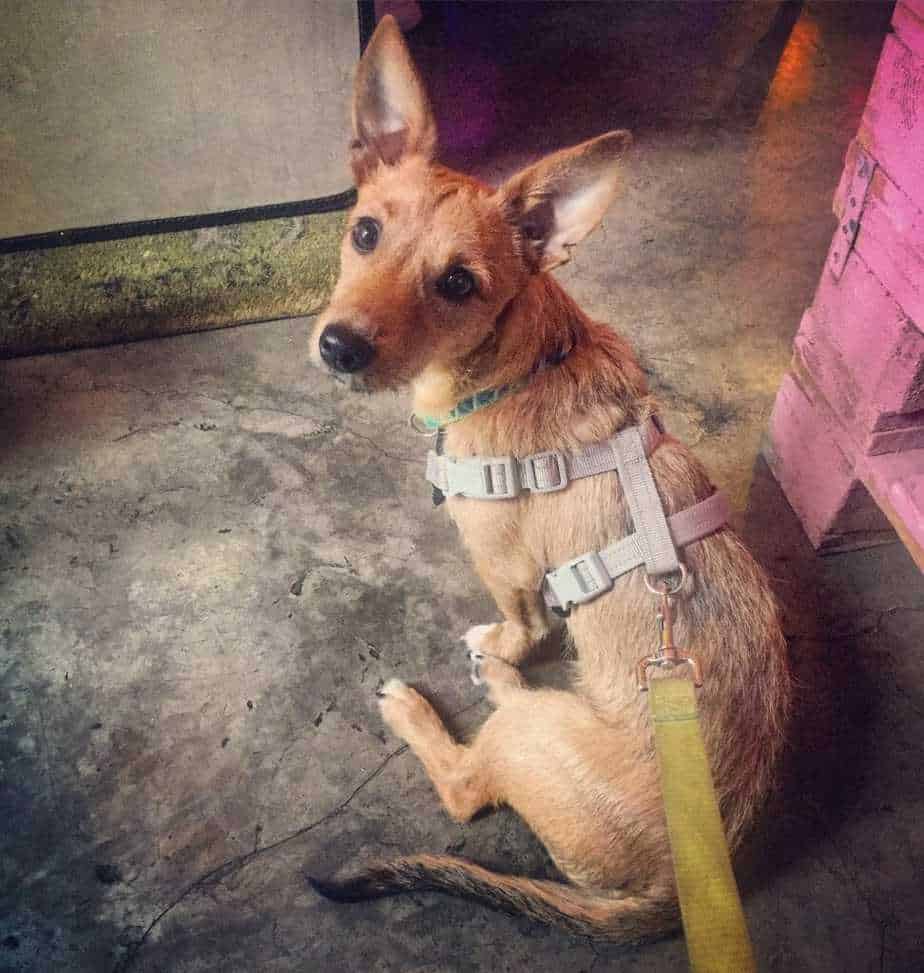 1. They were bred to hunt badgers

The name Dachshund comes from the German words “dachs” meaning badger and “hund” meaning hound.  The Dachshund is literally a badger hound! The size and shape of the Dachshund allows it to easily infiltrate badger holes. Badgers are known to be aggressive and hostile when threatened so hunters needed a dog that was fearless enough to go to battle against its prey.  Dachshunds who are bred to be pets still have those same qualities that are reflected in their big personalities.

2. They are small but mighty 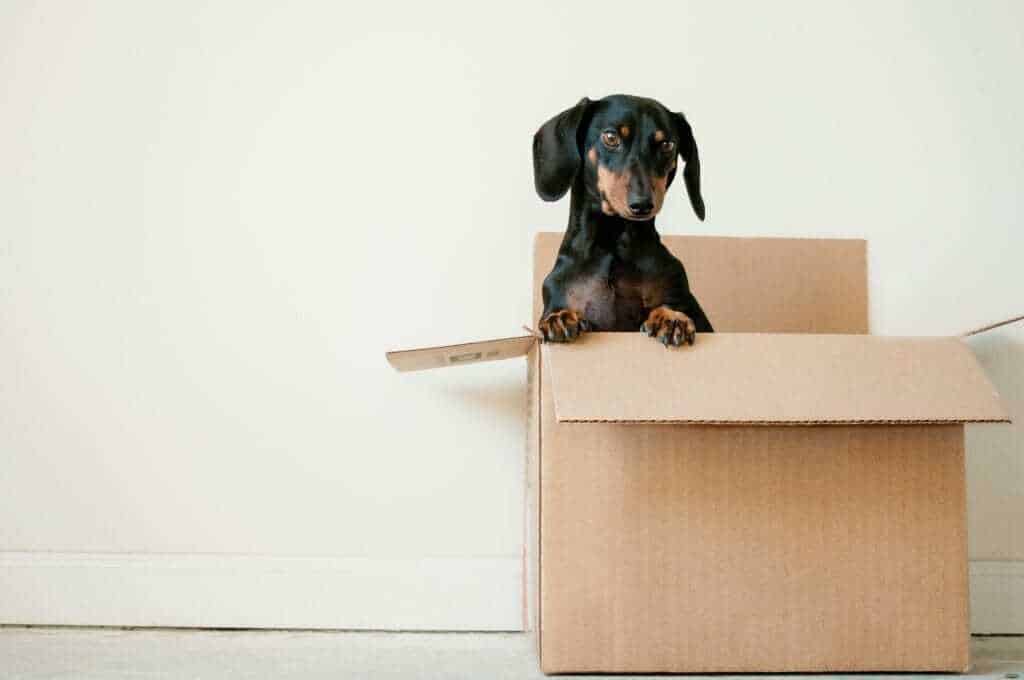 Dachshunds will be sure to keep you laughing

Dachshunds are loved for their bold personalities.  They are the right mix of silly and mischievous. Even when they are misbehaving, it’s hard not to crack a smile.  One evening in college, I was studying for a final exam when my Doxie Molly decided she needed my undivided attention.  After several failed attempts to get me to close my books, she proceeded to raid my clothes hamper. I spent the next ten minutes chasing her as she ran through the house, swinging a pair of my underwear in the air.  Needless to say, she found a way to become the star of the night no matter what it took.

Aside from being celebrated clowns, they are not afraid to tell you what’s what.  Doxies can be very stubborn which can make training difficult. Don’t mistake their stubbornness for unillegence though.  Dachshunds are more than capable of learning a wide range of commands and tricks; they just choose to do so on their own time.  Training that utilizes small food rewards (but beware of overfeeding!) and positive reinforcement works best with this outgoing yet sensitive breed.

Speaking once again to their stubbornness, Doxies can be very difficult to housetrain.  While other breeds pick it up in no time, you may find yourself cleaning up messes for months (sometimes even years).  Consistency is key with Dachshunds. Staying on a schedule to provide structure as well as using extra special treats they only get when they do their business outside can help motivate them.  Some experts even assert that crate training is essential for success.

4. They are obsessed with food

Dachshunds love food.  And while those adorable little legs and big pleading eyes just melt your heart, don’t be tempted to overfeed them.  My Dachshund mix has the uncanny ability to act as if she’s dying of hunger, even soon after mealtime. For an inexperienced Doxie owner, this might prove to be a convincing act.  But be strong; as long as you are feeding them the recommended amount of high-quality food and giving treats sparingly, they should be healthy and lean. Extra weight puts dangerous stress on the back which can cause serious and long-term issues.

5. They run the risk of developing back problems 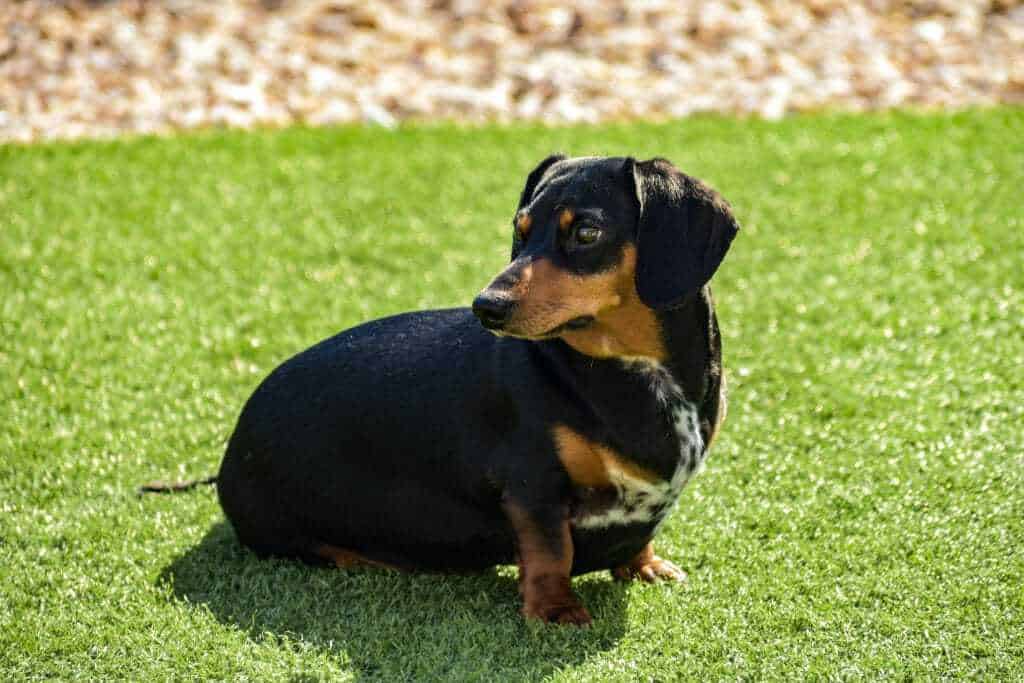 Overfeeding your Dachshund is both unhealthy and potentially dangerous

Dachshunds have a type of dwarfism called chondrodysplasia, which is what gives them their short legs.  This short stature combined with a long spine puts Doxies at risk for intervertebral disc disease, or IVDD.  IVDD can cause mild to severe pain that is either short-term or long-term. A study published in Canine Genetics and Epidemiology in 2016 reported that between 19-24% of Dachshunds will show clinical signs of IVDD during the course of their lives.

This disease occurs when a disc becomes herniated.  In some cases, pain medication and rest can help recovery.  For more serious injuries, surgery may be necessary. Paralysis is an unfortunate outcome for the most severe cases.

To reduce the risk of IVDD owners can take several preventative steps.  Feeding a well-balanced and nutritious diet is key to maintaining overall health.  Food should be fed in appropriate amounts to avoid overweight or obesity. Another important part of general health that will protect the back is regular exercise which strengthens muscles and the spine itself.  Lastly, owners can try to limit their Dachshund from jumping on and off furniture and may choose to carry them up and down stairs. When carrying a Doxie, supporting the back is essential.

6. They have a long life expectancy

Although they can be prone to back problems, don’t be fooled: Dachshunds are generally healthy and can live between 12-16 years.  In fact, the first Guinness World Record was held by a Doxie who lived to age 21! With proper care, you can look forward to a long, exciting life with your sidekick. 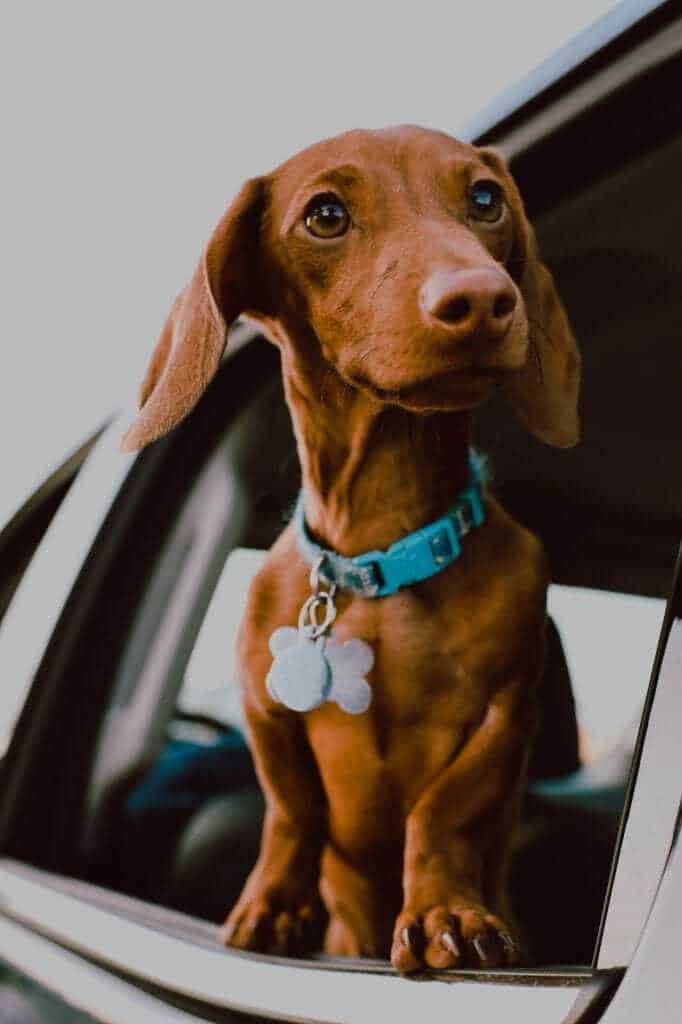 Whether on the road or in the air, Dachshunds are made for travel

Their small size makes it easy to take them just about anywhere which means you’ll never be without your little buddy.  Even the standard size can fit into a travel carrier so trains and planes are no problem. If traveling by car, make sure to buy a proper harness to buckle them in safely.

Dachshunds are pretty adaptable and just want to be where you are so new places are taken in stride.  While it may seem that their small size is limiting, they have been known to hike and even swim. Through all the outdoor activity, just make sure their backs are protected!

8. They come in sizes small and smaller 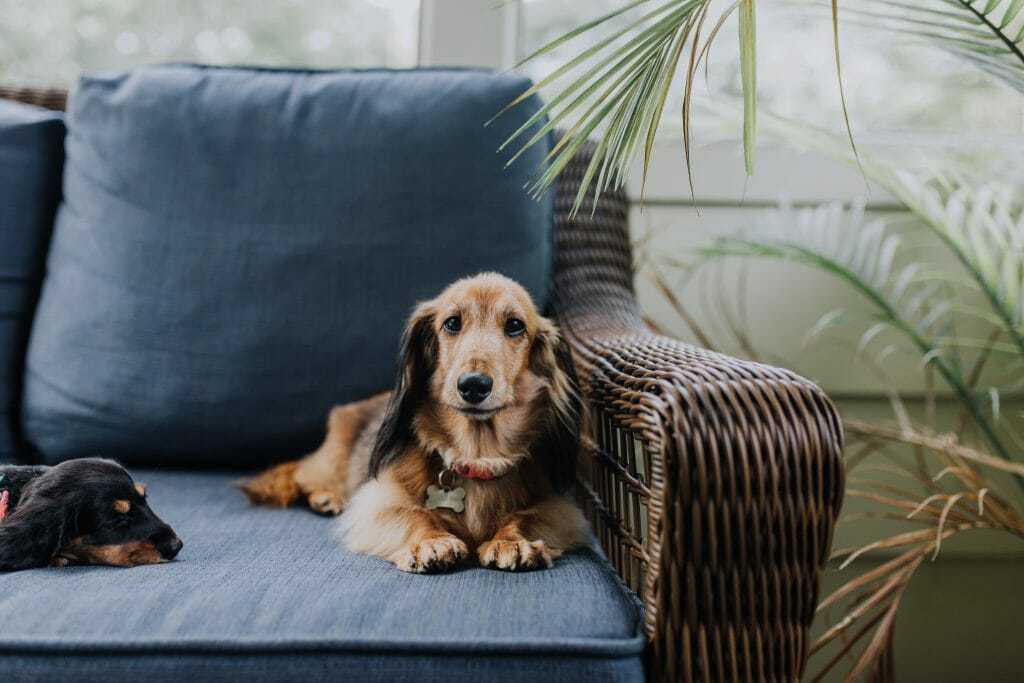 Dachshunds come in standard and miniature sizes.  The standard Doxies stands around 8-9 inches and weighs between 16 and 32 lbs.  The miniature is about 5-6 inches at the shoulder and weighs 11 lbs or less.

In addition to size, you also can choose from three types of coat.  Both the standard and the miniature can have smooth, long, or wire coats.  The smooth variety is fairly maintenance-free and only requires periodic brushing.  The Doxies with long and wire coats need a bit more care to ensure their fur doesn’t become matted.

And the snow.  And the cold. When you’re so low to the ground though, it’s easy to understand why.  Dachshunds are very sensitive to cold temperatures as well as rain so it’s not uncommon to see them decked out in sweaters and raincoats.  These may be cute but they also serve a purpose. Their aversion to weather events may be so extreme at times that they’ll flat out refuse to go outside.  Outdoor gear my help to coax your short friend into the elements.

10. They needed a public relations makeover during World War I

After the US went to war with Germany during WWI, Americans felt passionately against supporting anything German.  This included Dachshunds! The then German Emperor and King of Prussia Kaiser Wilhelm II had a love of the breed which caused many Americans to turn against their pets.  Reports of Dachshunds being killed in public came in from across the country. To combat the fear and stigma, Dachshunds were temporarily renamed. The American Kennel Club tried to market the breed names “liberty hound” and “badger dog,” the latter being a nod to the German translation.

11. They tend to bond closely with one person 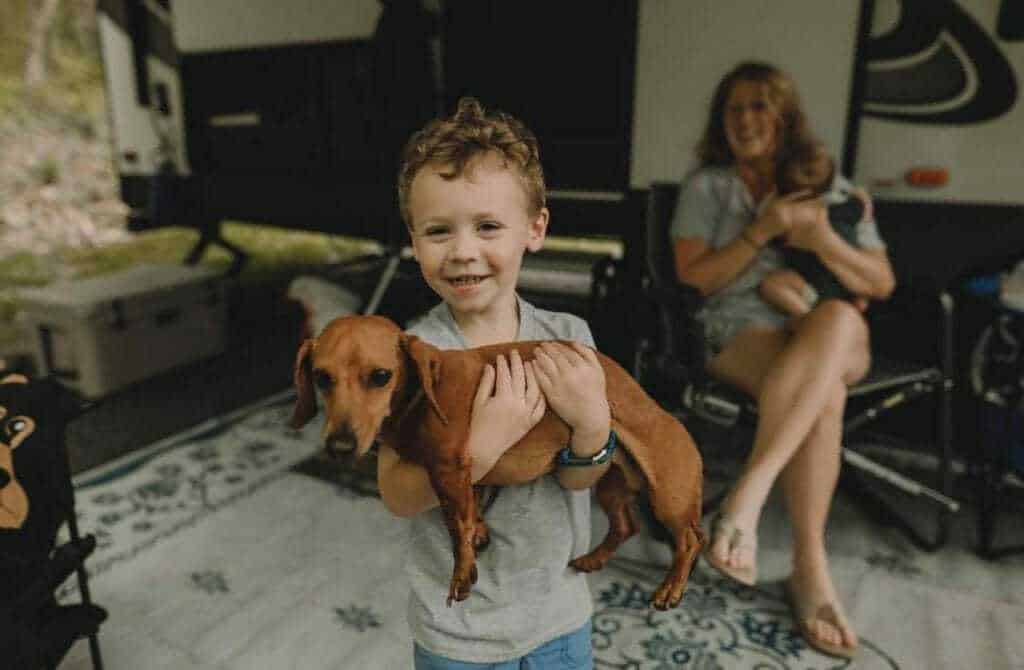 These dogs have a tendency to pick one family member to bond with more closely than the others.  This does not mean, however, that they are one-person dogs. With the right socialization, Dachshunds make wonderful family dogs.  But again, socialization and training is key to avoid any jealousy the Doxie may have when not the center of attention. Doxies do well with children but take care that they are not played with roughly.

Dachshunds are full of spunk and fun.  If you want a dog with a strong personality, this is a great breed to consider.  Dachshund owners will need a lot of patience and understanding but the work you put in will certainly pay off for years to come. 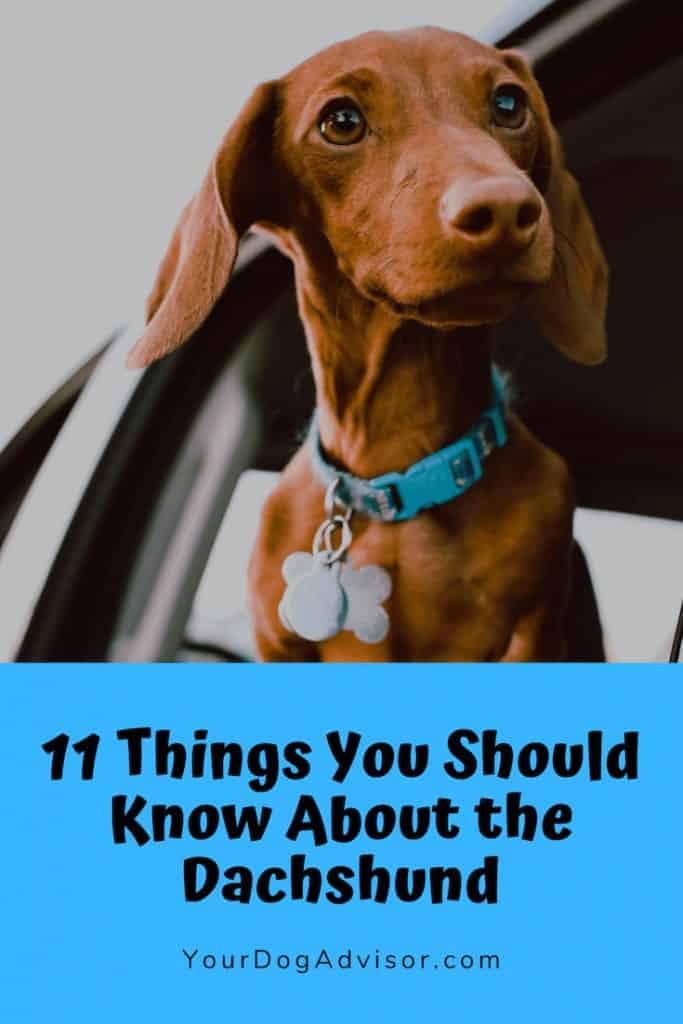