We love our flat-nosed dogs, from pugs to bulldogs. They’re loyal and friendly dogs that you can’t help but become attached to. Unfortunately, flat-nosed dogs come with a myriad of health and breathing problems.

The first time I heard my pug reverse sneezing, I thought he was having an asthma attack. I was terrified and didn’t know what to do other than to rush him to the vet.

According to my vet, I wasn’t the first dog owner to take my dog to see them for this strange behavior and the strange sounds that come along with it.

So, what in the world is a reverse sneeze?

The first time my pug, Champ, reversed sneezed, I rushed him to the hospital.

What is Reverse Sneezing?

Reverse sneezing (inspiratory paroxysmal respiration or pharyngeal gag reflex) is when a dog pulls air into their nose too fast, the opposite of a normal sneeze. It irritates the inside of your dog’s nose, which causes this inward sneeze.

Reverse sneezing can happen in any dog but it’s a more common occurrence in flat-nosed and flat-faced breeds.

When a dog reverse sneezes, they extend their neck while making a choking or snorting sound. They’ll keep inhaling and their legs or elbows might extend out. Some dogs, like my pug, will lick their noses in the process of one of these sneezes.

Since your pup is inhaling so much air through their nose, it makes it harder for them to breathe. So, their chest expands when they try to catch their breath and stop the tickle inside their nose.

They can make a variety of noises during one of these sneezes like: choking, snorting, and some have even compared it to a honking like you hear in geese.

A reverse sneeze only lasts a few seconds to a minute. After the episode is finished, your dog will go back to normal, as if nothing happened. 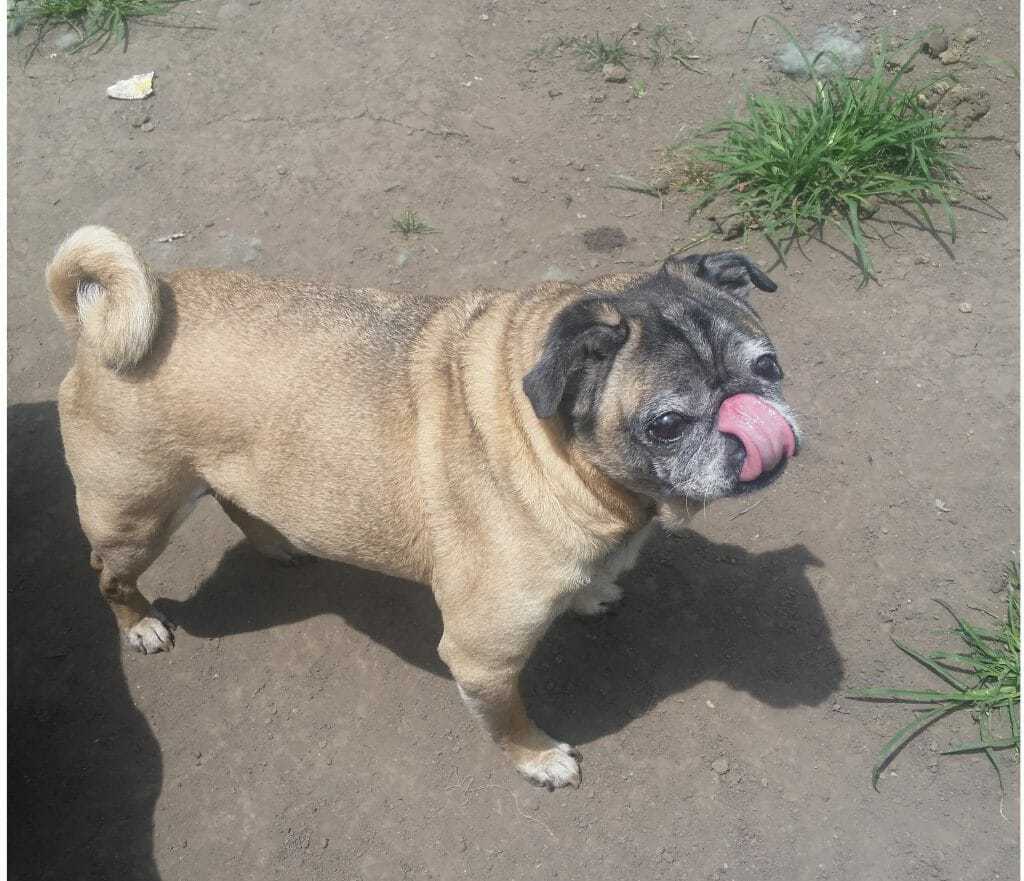 Pugs and other flat-nosed dogs often lick their noses to help them breathe.

Dogs with flat faces and flat noses (brachycephalic dogs) are more prone to reverse sneezing and other breathing problems than any other breeds.

These types of dogs have a long soft palate. The palate is the flexible part of the roof of a dog’s mouth, towards the back of their throat.

These breeds can accidentally pull this soft palate to the back of their throat, which can cause reverse sneezing from the irritation.

Since they also have smaller throats, it’s easier for their throats to get irritated too, also resulting in a reverse sneeze.

Other causes of reverse sneezing include:

If your dog is suffering from chronic reverse sneezing it could be because of:

If your pup only reverse sneezes from time to time, you don’t need to worry about any other health conditions. It’s just as normal for dogs to reverse sneeze as it is for them to have a regular sneezing.

If your dog is in the middle of a reverse sneezing episode, keep calm. If you freak out, your dog will get scared and continue to suck in too much air through their nose. This makes the episode last longer.

When my pug has an episode, I cover his nose for a few seconds. This technique sounds crazy but tons of put owners use it. It works almost every time.

Covering your dog’s nose for a short period forces them to catch their breath and helps end the sneezing episode.

Every now and then, my pug will start sneezing again within a few minutes. So, I rub his throat to comfort him and help ease the itch just a little.

However, if your dog is reverse sneezing quite often, you’re going to want to head to the vet.

Even though flat-faced and flat-nosed dogs are more prone to reverse sneezing, you still want to get your dog checked out for any underlying health issues that could be causing chronic reverse sneezing.

Depending on what’s causing the incessant sneezing in your pup, your vet will have different treatments. 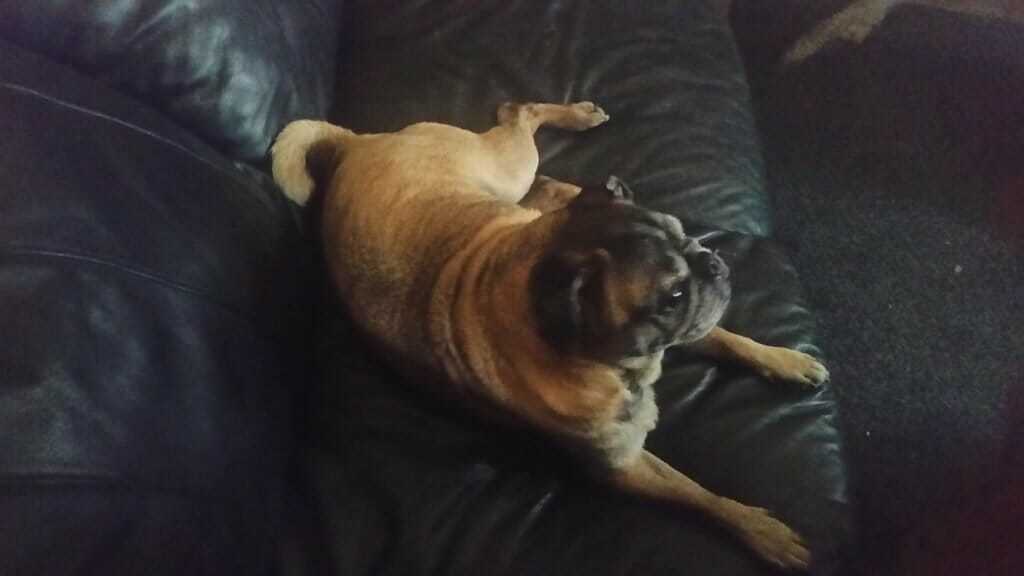 Allergies are a common issue that causes reverse sneezing in dogs.

If allergies are causing your dog’s chronic reverse sneezing, your vet will suggest allergy medication such as antihistamines. You can use the over-the-counter antihistamines that you’d buy for your own allergies.

There are other medications that your vet may prescribe for your dog’s allergies too.

For some pups, antihistamines won’t work so your vet may suggest a steroid shot. These shots are highly effective but there are several side effects to take into consideration before having a vet administer one of them.

Periodontal disease is the most common health issue among dogs.

When this bacteria attacks your pup’s teeth, it destroys their gums and the base of the tooth (or teeth).

This is called an oronasal fistula. This lack of bone makes it easy for food or even dust and other allergens to get stuck in the nasal cavity, causing chronic reverse sneezing.

In order to diagnose your dog with periodontal disease, your vet will exam their teeth and possibly do an x-ray since most of the disease is located under the gums and hard to see with the naked eye.

First, your vet will prescribe antibiotics to fight the bacteria. Once the infection is cleared and it’s not spreading to the rest of your pup’s teeth, your vet will put your dog under so they can do a complete examination of your dog’s teeth and gums.

This exam gives the vet an idea of the best treatment plan and how far the disease has progressed. They may even have to pull any bad teeth that are beyond saving while your dog is still under anesthesia.

Depending on how far advanced periodontal disease is in your pup’s mouth, your dog may just need a strong plaque cleaning.

If it’s further along, there are different procedures your vet will suggest to help save their teeth.

Nasal mites could be the reason for your dog’s chronic reverse sneezing. These creatures are spread from contact from other dogs’ infested with the mites.

These nasty little suckers hide out in the mucus of your dog’s nasal cavities and in their sinuses. They can cause a variety of health problems for your dog, not just reverse sneezing.

Dogs are usually diagnosed when the vet notices the mites in the dog’s mucus sample. They might flush the pup’s nose out to obtain the mucus sample.

There are different types of medication that your vet will prescribe to take care of the nasal mites. As much of a nuisance as nasal mites are, they’re easy to get rid of.

Growths in the Nasal Cavity

Polyps can start to grow on your dog’s mucus membranes. There isn’t a pinned down reason for polyp growths but they do happen.

On the bright side, these types of growths are benign.

In order for your vet to distinguish between polyps and tumors, they will either put your dog under to exam the mucus membranes in your dog’s nose or they’ll perform a rhinoscopy.

A rhinoscopy consists of inserting an endoscope through your dog’s nose and using a mirror to examine the inside of their nasal cavity.

They’ll do a biopsy to determine if the growth is just a polyp or a tumor.

Once it’s determined that your dog has a polyp, the vet will put your dog under to remove the polyp by the root. Pulling it out by the root prevents it from regrowing in your dog’s nasal cavity.

If there’s a tumor in one of your dog’s nasal cavities instead of a polyp, your vet will do an x-ray or even a ct scan to see how advanced the tumor is.

Since these tumors can spread to your pup’s lymph nodes or lungs, it’s important for your dog to be treated as soon as possible.

Radiation is the usual go-to to treat these tumors. Surgery can cause complications since that area is connected to your dog’s vision as well. 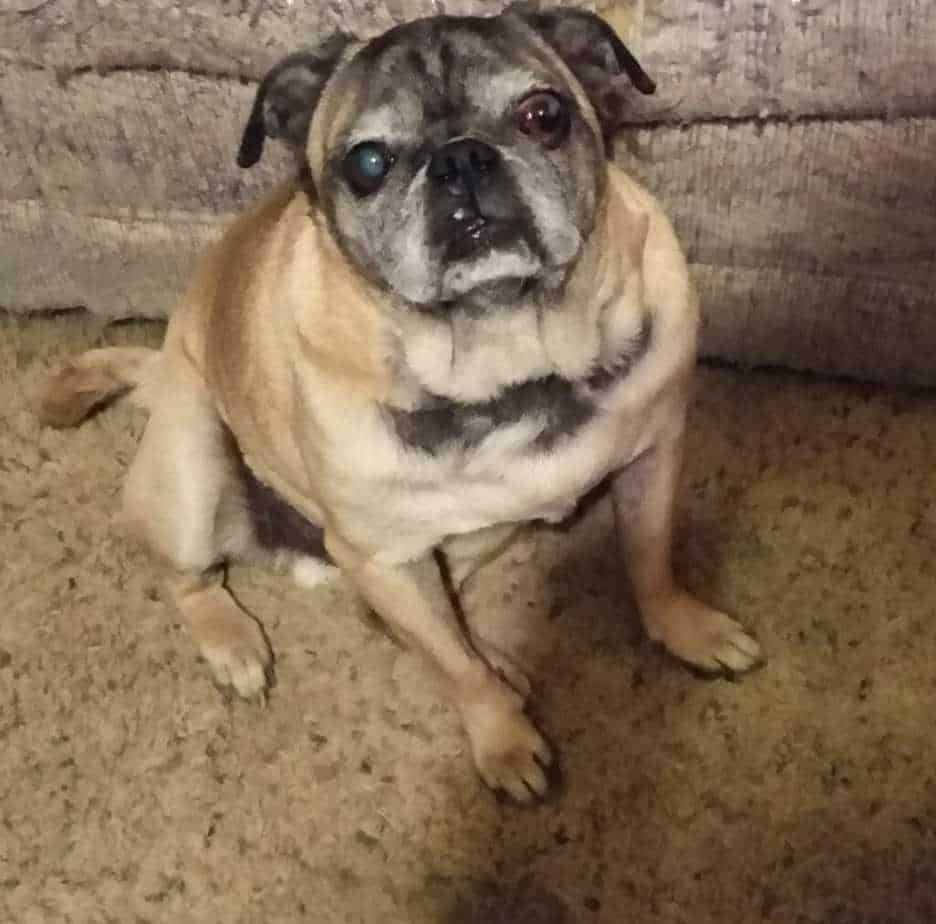 If your dog is suffering from chronic reverse sneezing, you should take him to the vet for a checkup.

Reverse sneezing can be scary the first time you witness your dog have an episode, but if you can spot it, you can make your dog more comfortable during the episode.

Most of the time, reverse sneezing isn’t a big deal and you shouldn’t be worried.

If the episodes last longer than a few minutes or happen frequently, you should take your dog to the vet immediately to rule out anything dangerous causing the reverse sneezing or any other serious conditions happening inside your pup’s body. 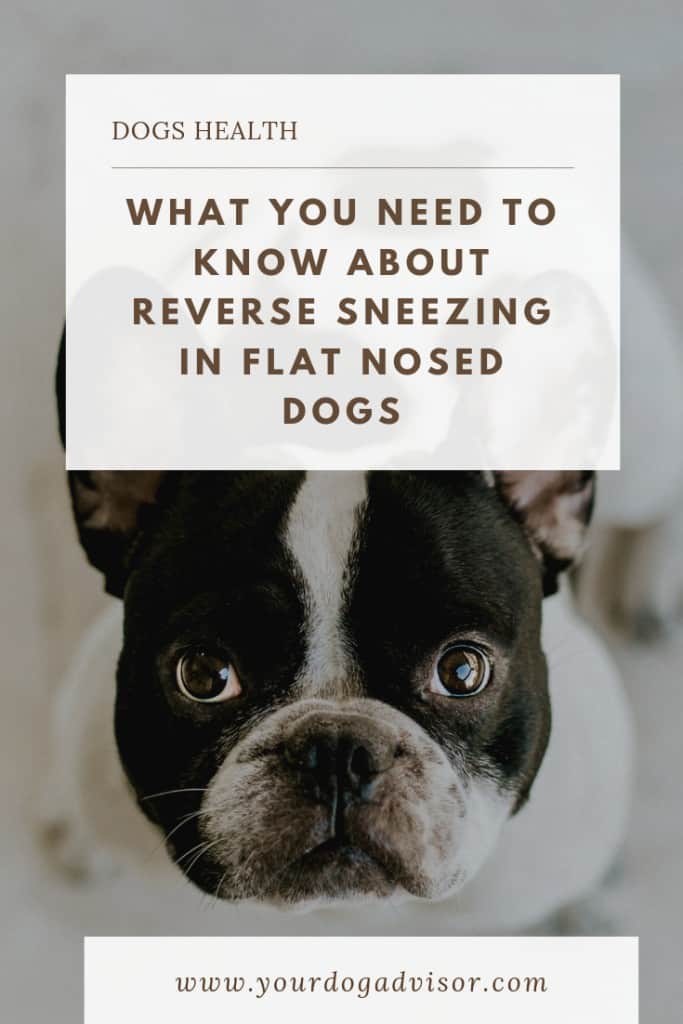