As an owner of a dog with brachycephalic syndrome, I wanted to learn as much as possible about the potential side effects in order to best care for my dog. My Boston Terrier, Nickel, struggles with many of the symptoms of the brachycephalic syndrome and I’m excited to share the many tips and tricks we’ve found to help her and your dog out!

What Is Brachycephalic Syndrome? 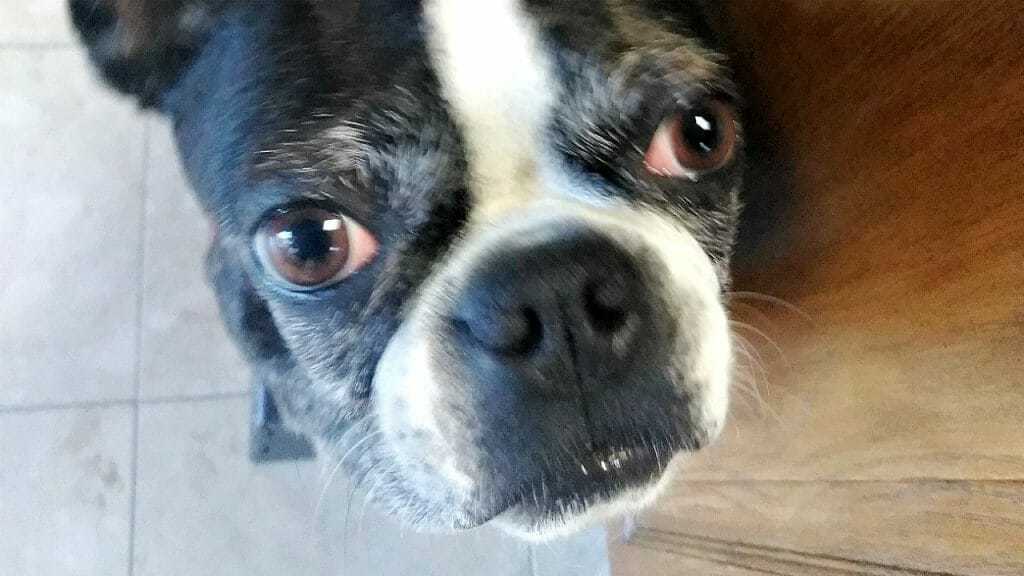 A close look at Nickel’s snout. As a puppy, our veterinarian surgically opened her stenotic nares, which is the area around the nostrils, and this has greatly helped her breathing.

It is recommended that you see a veterinary if your dog is regurgitating or vomiting as these are some of the most serious problems facing dogs with brachycephalic syndrome. One primary treatment is to have your dog undergo surgery to shorten their soft palette, which opens the airway for better breathing, and resectioning their stenotic nares which is the area around the nostrils. My dog, Nickel, had her stenotic nares opened up as a puppy when she was getting fixed. This has dramatically improved her breathing and she is the most athletic Boston terrier that we have ever had. She still snores and will snort occasionally but she is far more heat tolerant and athletic than any other Boston terrier we’ve owned. I would highly recommend consulting with your veterinarian about ways to improve your dog’s breathing and quality of life whether through surgery or other means! 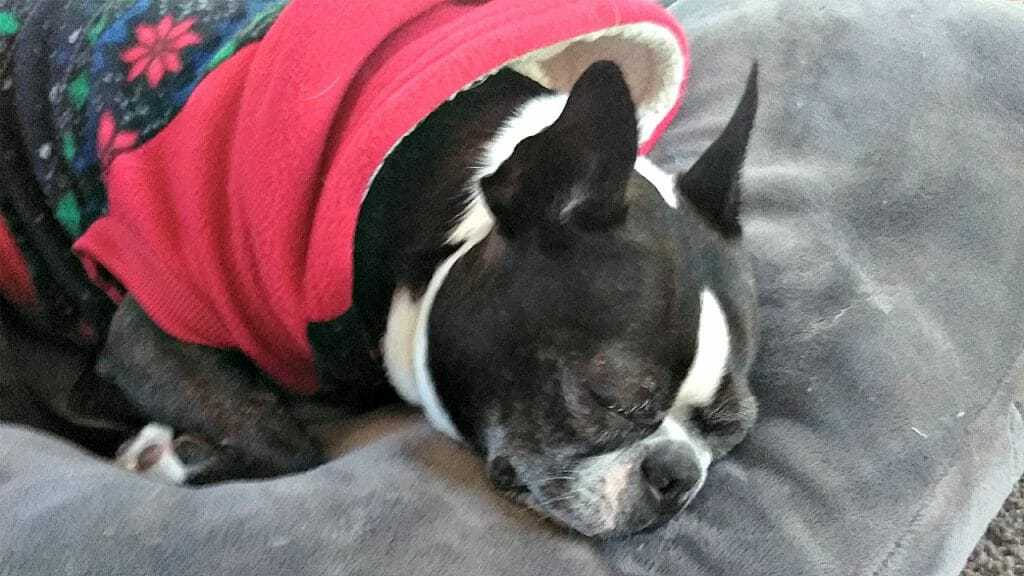 Nickel snoring while enjoying her nap. Her snoring varies and is usually heaviest at night.

What Dog Breeds Have Brachycephalic Syndrome?

There are a surprising amount of dog breeds that have brachycephalic syndrome. Many of these dog breeds are incredibly popular and considered very cute like pugs.

Here is a complete list of all dog breeds with brachycephalic syndrome:

Exercise is very important to any dog’s health, however it is crucial that you watch the heat with your brachycephalic dog as they don’t tolerate heat well. When it’s hot out avoid strenuous activities with your dog, try to avoid the hottest parts of the day, and keep your trips outside shorter. If you are outside take time to stop in the shade and bring water for your dog. Collapsible bowls are a great option for keeping your dog hydrated. Never leave your dog in the car even if you have the window cracked as this can easily cause heat stroke and potential death. It’s ideal that you keep your dog in a cool, air conditioned environment as much as possible.

Other ways to help your pet stay cool include adding a kiddie pool in your backyard, purchasing a cooling mat, and having cold edibles or toys for your dog to chew on. Try placing your dog’s toys in the freezer for one to two hours before playtime.

Please keep in mind that some of these brachycephalic dog breeds are more affected than others. For example, boxers tend to have a less extreme form of brachycephalic syndrome which allows them to tolerate heat and exercise better. However, dogs with thicker coats will need adjustments even more during hot weather. We recommend keeping up with regular brushing to lessen their chance of overheating. All dogs can benefit from some tips about coping with hot weather especially our beloved brachycephalic dog. 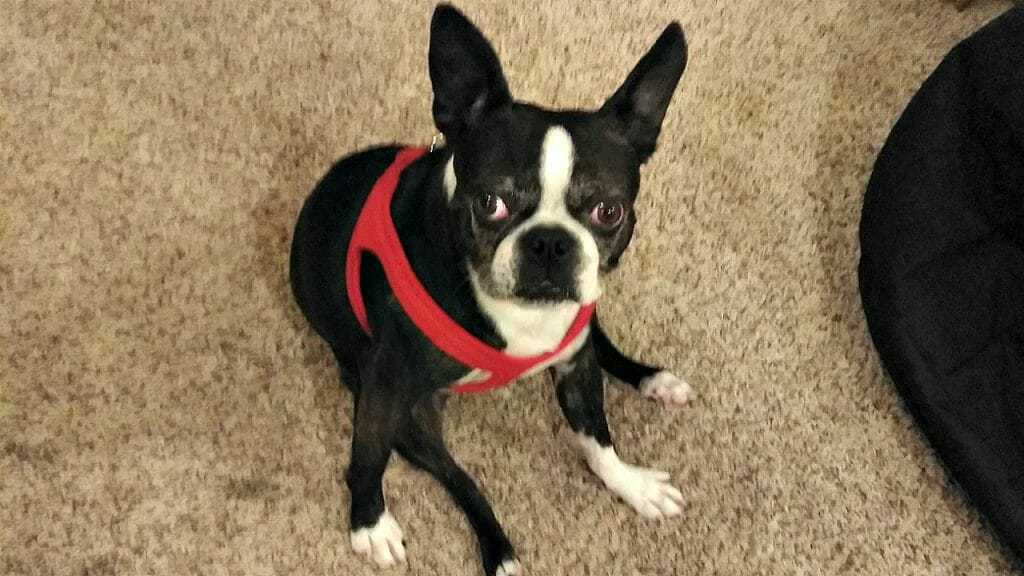 Nickel seems to be most comfortable in a harness rather than a collar around the neck. The harness keeps her restrained enough when on a leash but doesn’t irritate the delicate neck area. Dogs with brachycephalic syndrome have more sensitive necks due to their compromised respiratory system.

Brachycephalic dogs have shorter breathing passages and flat faces which make breathing harder and respiratory distress more common. Choke collars are most often marketed towards larger breeds as a way of controlling them, however these collars can be very dangerous to dogs with brachycephalic syndrome. Choke collars work by applying pressure to the dog’s windpipe when they pull and are often used to train dogs to walk nicely on a leash. Due to the pressure on the windpipe they are a dangerous choice for brachycephalic dogs who are prone to respiratory distress and I recommend staying far away from them to protect your dog’s wellbeing.

Flying can cause respiratory distress for these brachycephalic breeds, especially when your dog is in the cargo hold. Some airlines have even banned dogs like the French Bulldog from flying in the cargo hold as a result of previous medical emergencies which is why vets typically advise against flying with these brachycephalic breeds. Some airlines will allow brachycephalic  breeds to fly year round while others limit the time of year based on the hottest and coldest times of year. If you have a dog small enough to ride in the cabin with you this would be the safest option, so that you can keep an eye on their stress levels and have a safe flight. If you own a larger breed, we recommend booking them a pets only flight or opting to drive instead. 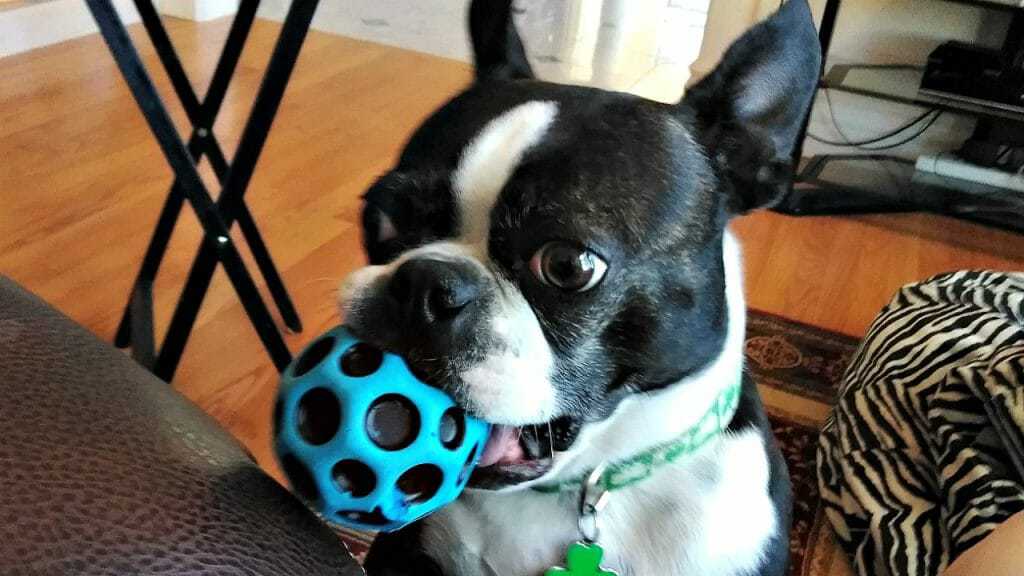 Nickel with her favorite thing in the world – a ball! This is the number one way that Nickel keeps herself fit which helps us watch her weight.

Watch The Weight And Stress

Maintaining a healthy weight is important for any dog breed, but dogs with brachycephalic syndrome are at an even higher risk when they are overweight.. Being overweight puts additional stress on their system as well as putting strain on their respiratory system. In addition, any type of extra stress could also cause anxiety which typically causes dogs to pant. As a result, it’s important to keep your pet at a healthy weight and as stress free as possible.

Dogs with brachycephalic syndrome can live very healthy and happy lives with a few adjustments to their lifestyle. Trust your gut and keep an eye out for any of these warning signs such as vomiting and signs that they are overheated. Your dog will thank you! 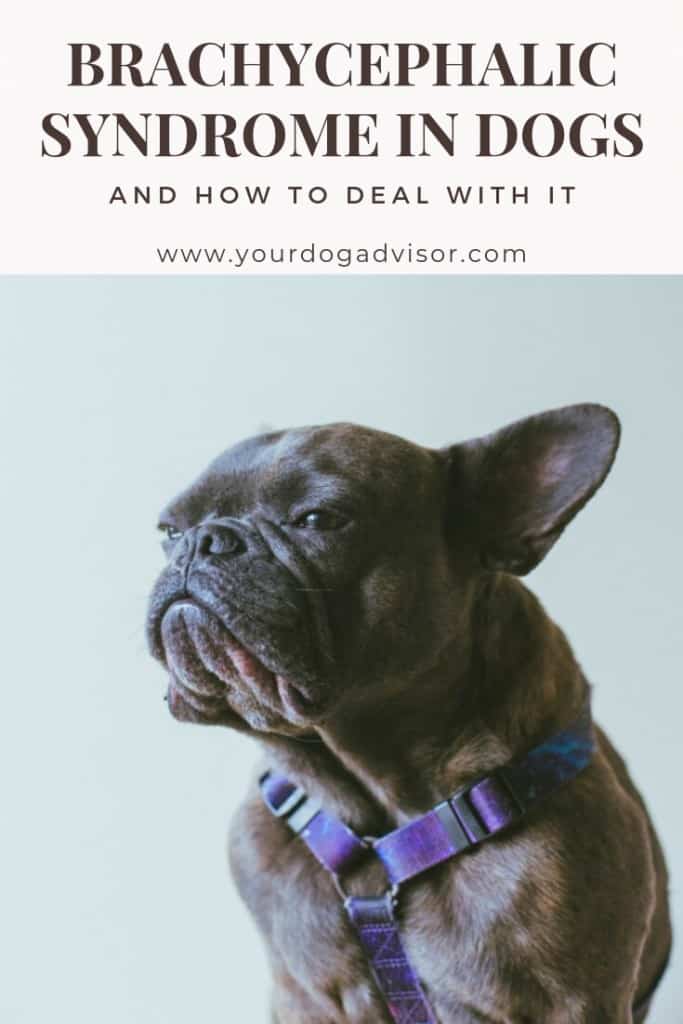