Very few dog breeds have a motto, but the Pug dog is so unique that having their own motto definitely makes sense.

And here it is: multum in parvo – a Latin phrase that translates to “a lot in a little.” That’s a very fitting description for the Pug dog that is both incredibly cute and notoriously full of personality and quirky charm. Pugs originated in China over 2,000 years ago.

The Pug is a very unique package, which means you should know what to expect before you adopt one into your family. Here are 14 things to know about this fun and funny breed.

Pug Other Names: Also known as Mops in Germany, Dutch Pug or Chinese Pug in England

Pug Temperament: Low energy level, likes to be a couch potato. Pugs were bred to be lap dogs

Pugs are members of the Toy Group in the American Kennel Club. They have a long life expectancy, typically from 13-15 years. They’re in the top 20% of the most popular dog breeds in the AKC today, coming in at number 32 out of 193. Pugs are 10-13” tall and usually weigh from 14-18 pounds. If you want to own one of these gorgeous dogs, get ready to pay anywhere between $1,300 -$3,000 for a purebred pug puppy. 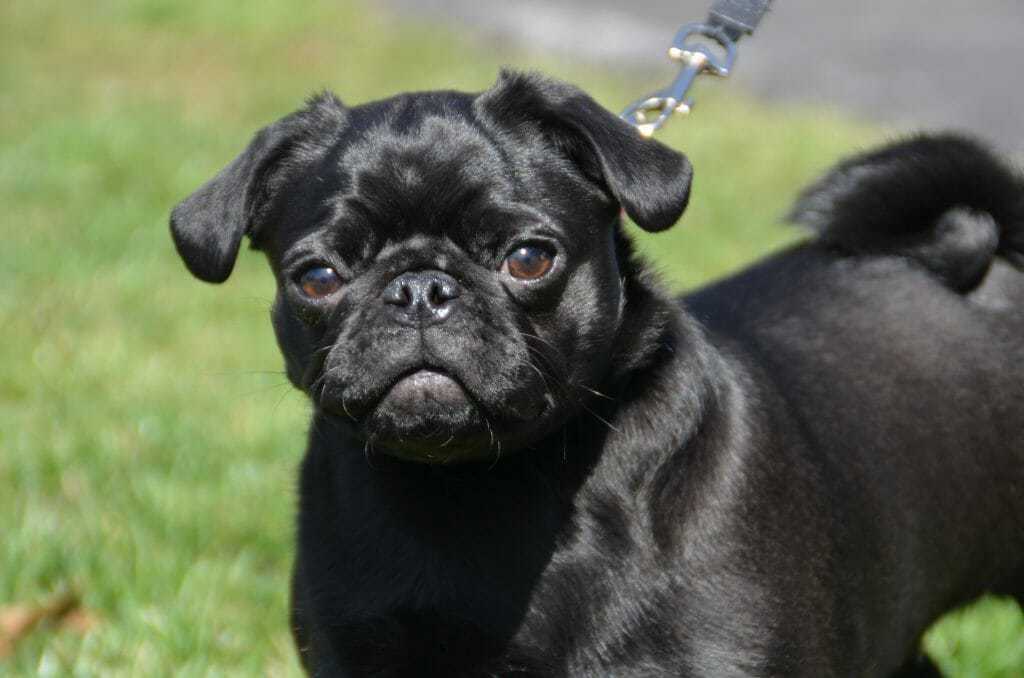 Despite the smaller stature, you can see the large personality and presence that the Pug projects in its instantly recognizable face which has deep wrinkles.

Pugs are known by an impressive number of names around the world.

Most breeds are called by a couple of different names around the world. The Pug is so popular that it has no less than half a dozen different names. In various parts of the world they’re called Carlin (France), Doguillo (Spain), Mophunds (Netherlands), Lo-sze (China), Mopsi (Finland), and in the USA they also go by Pug Dog.

The name Pug is thought to come from one of two places. First is the word “pugnus,” which is Latin for fist, possibly because the dog’s face with its facial wrinkles somewhat resembles a closed fist. A second option relates back to the marmoset monkeys, which were popular pets in the early 1700s. That monkey’s nickname was “pug” and their faces closely resemble that of Pug Dugs. 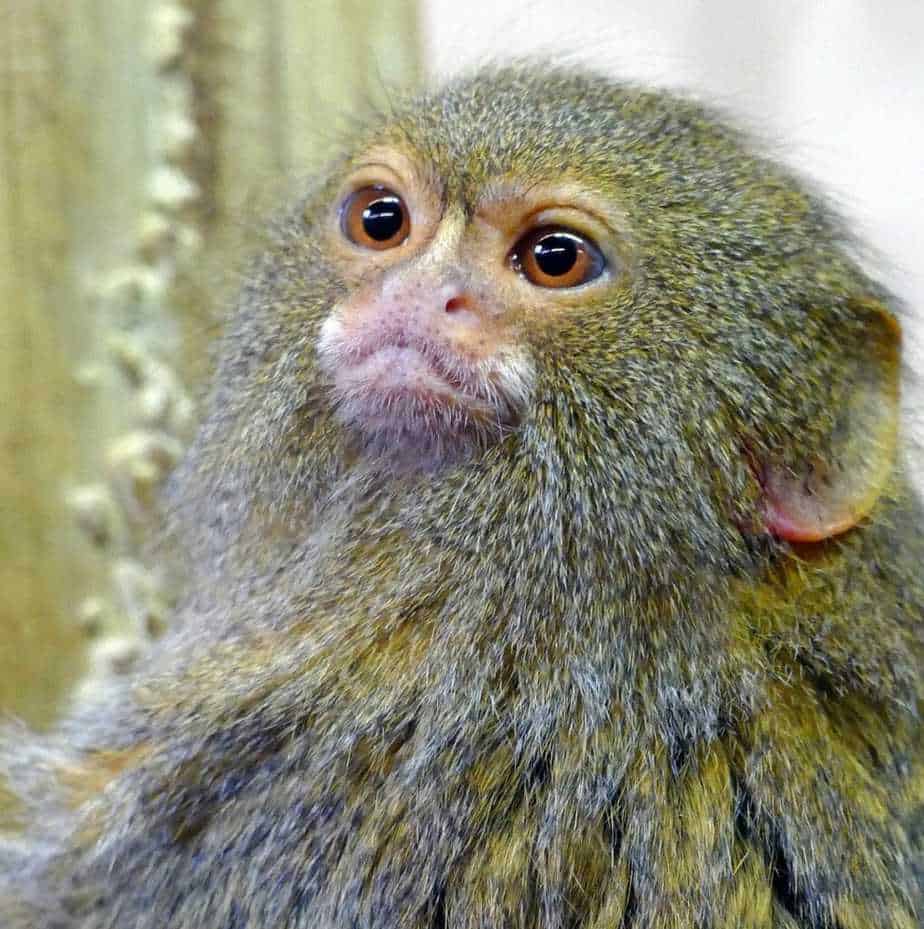 Here is a close-up of a marmoset monkey’s face. You can see the resemblance to the Pug, particularly in the large eyes, the shortened snout, and the small muzzle area. This similarity might be why Pugs got their name, because “pug” was a nickname for this popular pet monkey.

Some pretty famous people have owned and loved Pugs.

When we say “famous,” we’re not just talking about today’s celebrities. We’re talking about historically infamous people. Pugs were the official dog of Holland’s royal House of Orange, and forever cemented their place in the family when they saved the life of the Prince of Orange by barking to warn him of an invasion. William and Mary of the House of Orange loved them so much that they took several with them when they ascended the British throne, and one appears in effigy on William’s grave marker.

There are also stories about how Napolean and his wife Josephine owned a beloved Pug, and Josephine would sneak messages to her husband while he was in prison by hiding them under the dog’s collar when the dog was allowed to visit Napolean in prison. Other famous lovers of this breed include King Louis XiV, Queen Victoria, the Duke and Duchess of Windsor, fashion designer Valentino, and Winston Churchill, who was rumored to have drawn a picture of a pug next to his signature in the letters that he wrote to his wife.

The Pug coloring and coats are simple but remarkable.

There are only two acceptable coat colors per the breed standard: fawn and black. The black dogs must be all black, while the fawn-colored dogs should have black markings, including the ears and the muzzle.

In addition to the color, the feel of the coat on this breed is really beautiful. It’s smooth, soft, and slightly shiny. The dog does seasonally shed so owners should plan to routinely brush their dogs and give them occasional baths. You should also be sure to clean the wrinkles in their face regularly to make sure food and other things don’t get trapped in the folds. They need a high quality diet. 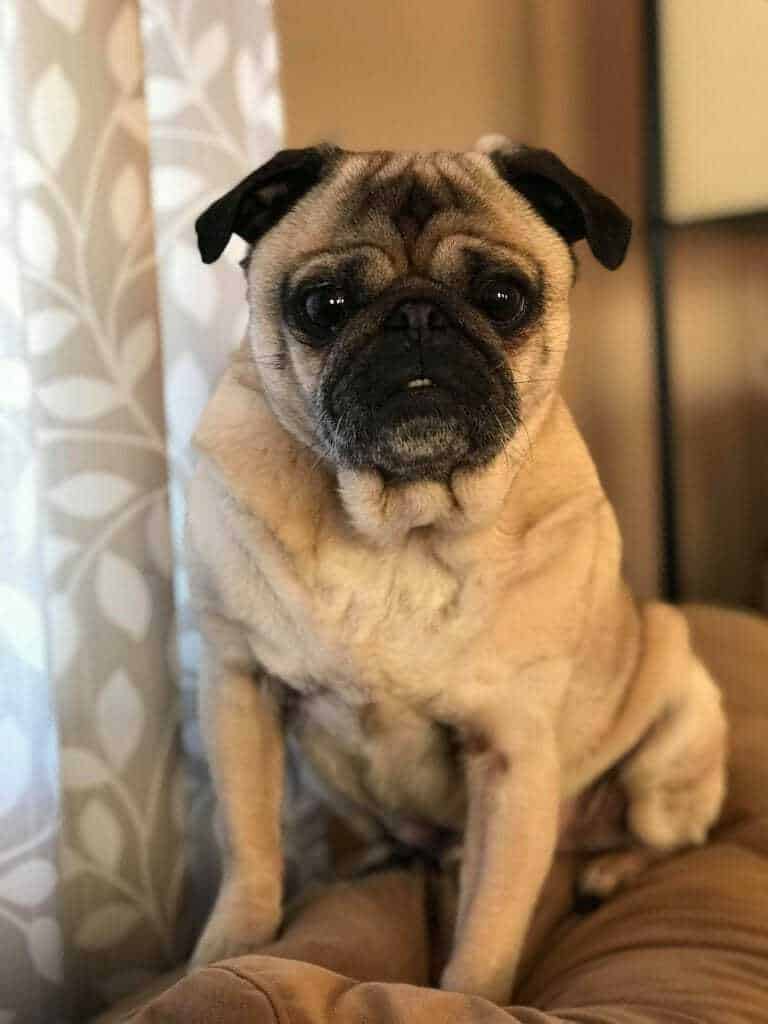 In contrast to black-coated Emi, Reilly is a seven-year-old fawn-colored Pug. His black ears and muzzle are a hallmark of the breed and something that judges look for in dog shows.

Pugs only need a moderate amount of exercise.

If you’re looking for a buddy to binge watch an entire season – or more – of a TV show, this might just be your breed. They don’t require a lot of exercise and very happy to be your couch companion. However, because Pugs also love to eat, they are prone to obesity and should be given a small amount of exercise daily to combat that potential health issue.

The distinctive faces of the Pug can sometimes mean big health problems.

In addition to obesity, there are few other health issues that Pug breed owners must consider, most of which have to do with the facial structure of the dog. Pugs are brachycephalic dogs, which means pugs have a shortened snout on a broader skull. Because of the stunted length, air isn’t given enough space to cool down in summer or warm up in winter before entering the dog’s lungs. This can lead to breathing problems, so the Pug is a breed that should avoid extreme cold or heat and humidity.

Their large eyes can also become problematic. Pug owners should watch out for dry eye and corneal ulcers. Other recommended tests include hip, kneecap, eye, and the Pug Dog Encephalitis test. That last test looks for signs of NME (Necrotizing Meningoenchephalitis), an inflammatory disease of the central nervous system that, while it only affects a small percentage of pugs, is progressive and fatal. 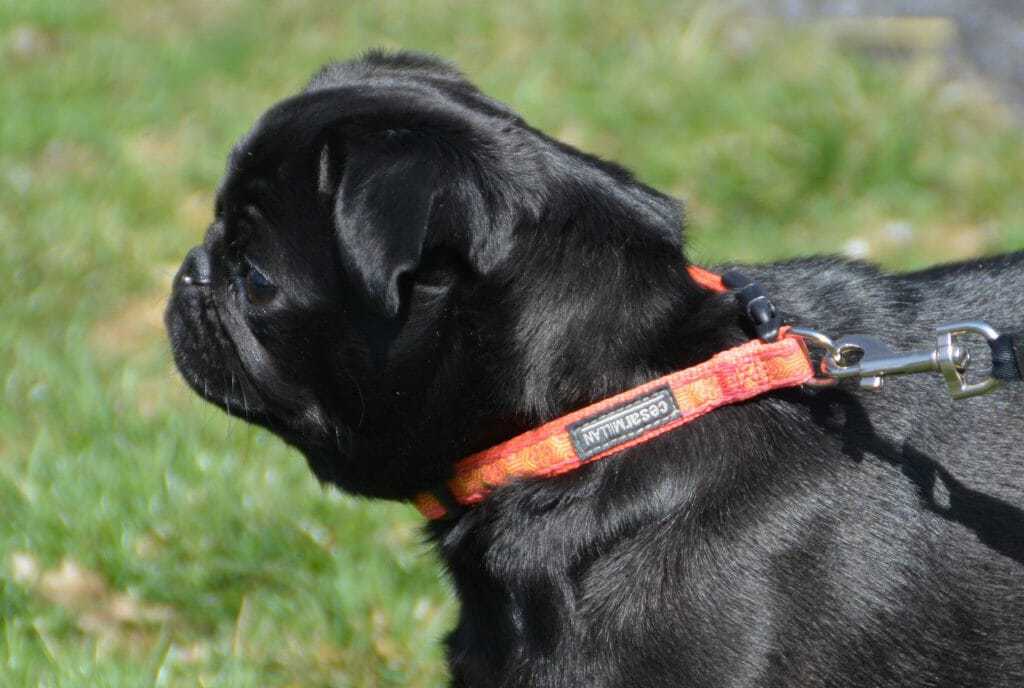 In this profile of a Pug face, you can see how flat her snout is. It’s this shortened nasal passage that can cause significant health problems. To prevent them, you should monitor their time outside during very hot and humid weather.

A Pug’s personality is far bigger than its body.

This breed is known for its fun and quirky personality. The official Pug Dog Club of America (PDCA) says that they are “suspended in life at the irresponsible age of a two-year-old child.” What does that mean? Expect your dog to want to be in your business all the time, show extreme stubbornness when it doesn’t want to do something you want it to do, demand all of your attention, and get mad when you leave. But also remember that two year olds have joyful spirits and are fun to be around, just like the Pug.

In addition to fun, this breed is also notoriously stubborn. On the PDCA website, one owner tells a story about a dog that left a “present” on his pillow every time he left the house without the dog, although the dog was otherwise completely housetrained. Another shares that his dog would only ever fall off a stool when a puppy was directly behind it. The dog didn’t like the puppy, and his “accidental” fall was his way of showing that!

While it’s a scary sound the first time you hear it, owners of this breed should learn to recognize reverse snoring for what it is and learn to put up with it. Reverse sneezing is a snorting sound that happens in dogs with short snouts, and occurs because their palates (the roof of their mouths) extends too far back into their throats, which keeps the dogs from getting enough air. Consequently, they breathe rapidly and the air being forced into the nose makes a snorting sound.

The snorting that you hear on the video is actually Emi reverse sneezing, something common in pugs.

The Pug stars in a children’s book series.

“Pig the Pug” is a series of books about a precocious Pug that goes on a series of adventures. The books are for children in preschool and kindergarten, and they learn manners and proper behavior as they experience life through Pig’s crazy experiences.

The Pug does not like to be left alone.

The pug is one of the more social dog breeds. Pugs crave human companionship and want to be with their people all of the time. If you are a person who is gone from your house for long stretches of time or who really treasures your personal space when you’re home, please consider a different breed. This one will be your shadow. For this reason, pugs are great dogs for apartment living. Pugs don’t need a lot of space because they’ll always be in yours.

Pugs and kids get along, but the ages of each should be considered.

Because this is a small breed with some quirky personality traits, the PDCA recommends considering both the age of the dog and the age of any children you might have in your home before adopting a Pug. In their assessment, younger kids should only be around older pugs. Older kids are fine to be around younger pugs because they understand how to handle and tolerate the dog. If you have kids between the ages of 5-9, the PDCA says they should be fine with “teenage” Pugs, which are anywhere from six to 18 months old.

Pugs have never met a stranger – and that includes other animals.

One of the real trademarks of this breed is how friendly they are. Pugs love every person they meet from the first time they’re introduced, and they want to be everyone’s best buddy. That love extends beyond people and includes all creatures. Pugs get along great with cats, other dogs, and smaller pets that you might own, like gerbils or guinea pigs. While she was being photographed, there were lots of kids outside, and Emi pulled on the leash the entire time, trying to get in on their fun.

The Pug has a long and interesting history.

The AKC traces the Pug’s history back to 400 BC. They really became established 2000 years ago in China where they were developed as pets for the Emperor, who was fond of flat-faced dogs. They were held by the Emperor and his successors as a closely guarded treasure for a long time, and the only way that anyone else obtained them was as a gift from the Emperor himself. It wasn’t until the 1500s that Dutch traders managed to smuggle some out of the Far East and take them back to Europe.

Among its many quirks is “Pug Selective Deafness.” It’s what used to describe a stubborn dog who is off leash and won’t come when called. While this could be an apt description for a lot of dogs, this breed is particularly good at ignoring its owner to do whatever it pleases. The dog’s innate stubbornness gets the better of it, and the Pug often won’t even acknowledge that you’re calling to it as it runs to join in the fun somewhere. For this reason, you should never walk a Pug off its leash. 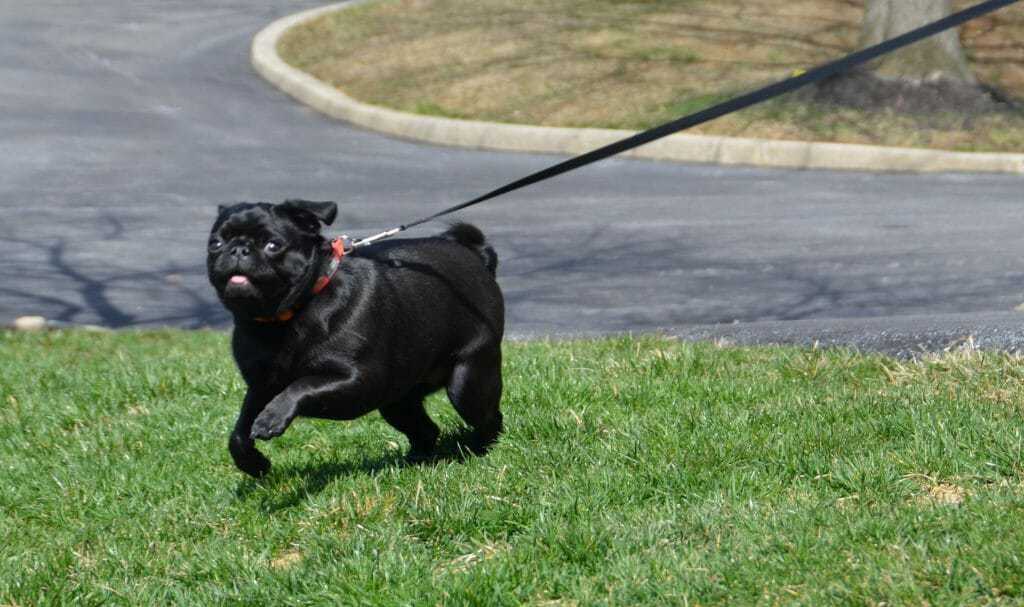 One look at this Pug and you can see that she is excitable and ready to run. Dogs in this breed should never be let off of their leash because the pugs are prone to taking off and ignoring your calls for them to return.

Pugs are smart, funny, and cute animals to have as pets. As long as you’re prepared to deal with some of the eccentricities that define the pug breed, you’ll have a friend for life if you adopt one of these dogs. 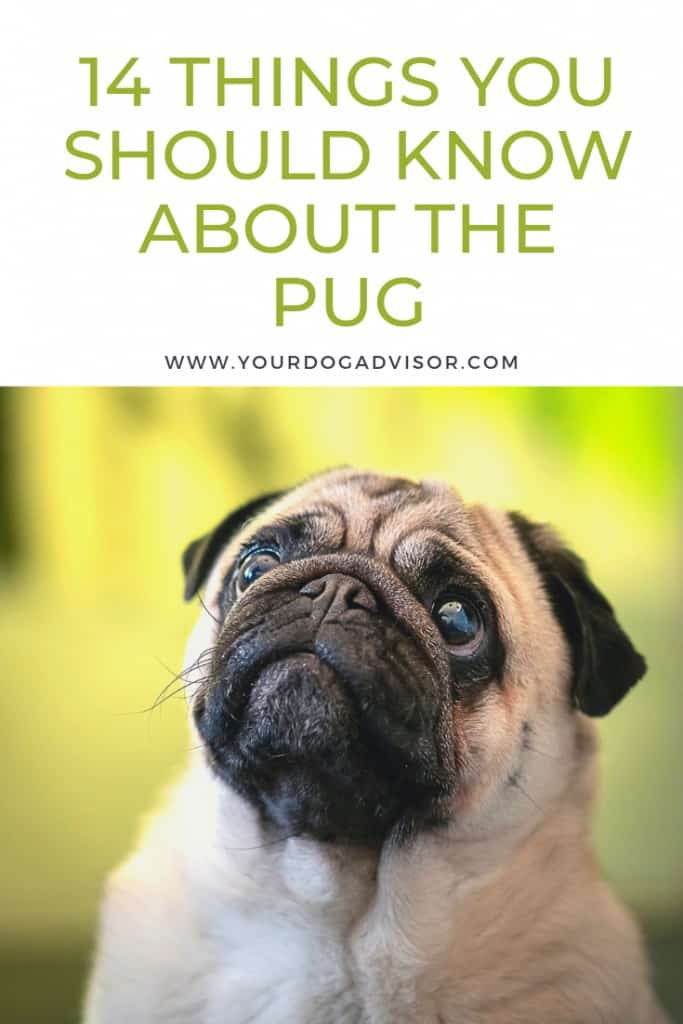