Ever since my wife and I became dog owners I have been wondering: why does my dog lick me? When my wife and I got our Maltese puppy, Schlumpf, back in 2013, he couldn’t stop licking me. At the time, I was overwhelmed to be a first-time dog owner, and since Schlumpf is primarily a mummy’s boy, I suppose I was grateful for any attention the dog gave me. That was why when he started licking me like crazy, I didn’t put up much resistance. I saw it as mere affection on his part.

But over the past 5 years, we have come to gradually realize that the licking problem has become serious in the sense that he can’t stop himself from doing it. When I sweat, he now licks me even more. It’s almost as if the switch to stop the licking gets stuck and he gets trapped in a constant psychological loop.

Considering that dog saliva can potentially be extremely serious to some dog owners, I started finding out the possible reasons why my dog licks me so much. Is it a sign of affection? Here are 6 reasons why some dogs love to lick. 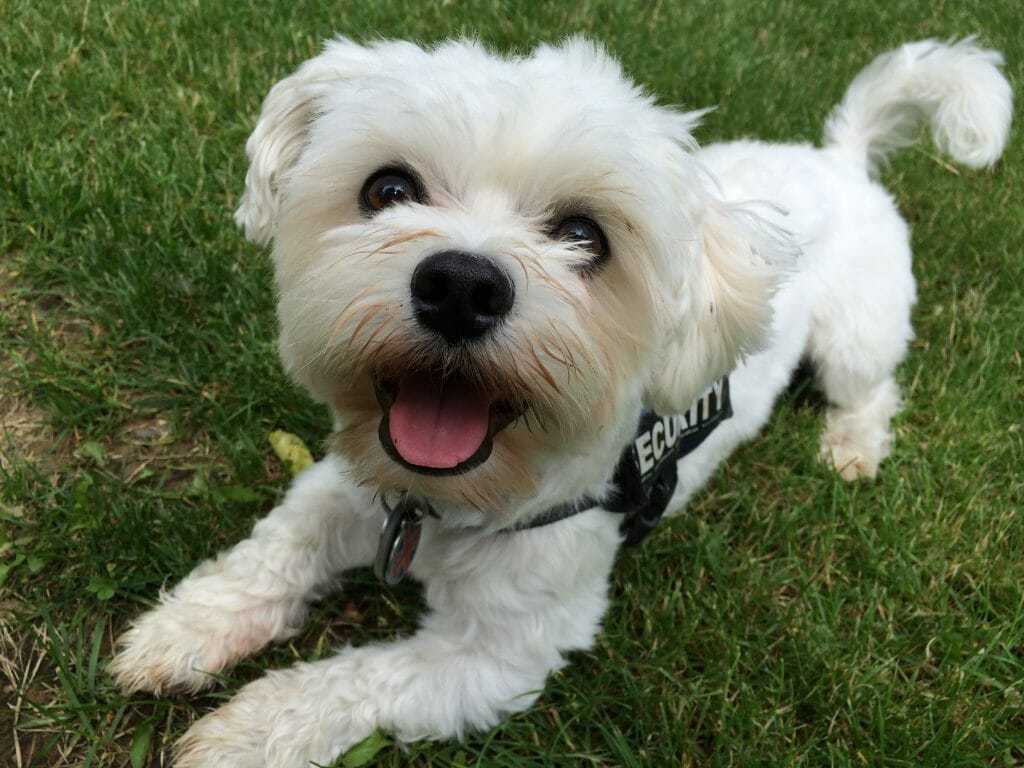 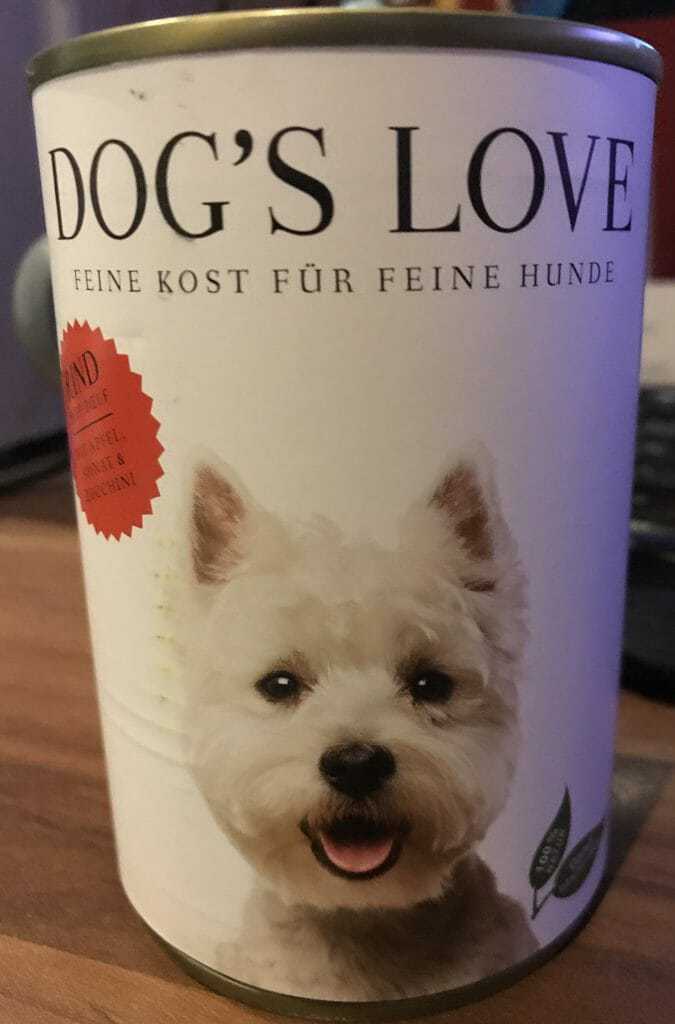 When we first got Schlumpf, we made the deliberate decision to feed him only the best food. We didn’t want to feed him supermarket brand food where there could be any type of “meat” in there. So we pay a bit extra to get him the good stuff. Sure, we feed him treats and the occasional scrap from our dinner. But on the whole, he eats better than we do!

But the obsessive licking has led us to wonder – as well as our vet – if there is not enough salt in the food? Maybe when he smells my sweat, Schlumpf is reminded that he needs more salt and starts licking enthusiastically?

We tried adding more salt to his diet and it made no noticeable difference to the licking. Maybe it was not enough salt, but when we give him a French fry with salt on it, he spits it out. So something tells me this is not the solution. My vet was equally puzzled.

He Can Taste My Medication In My Sweat Glands 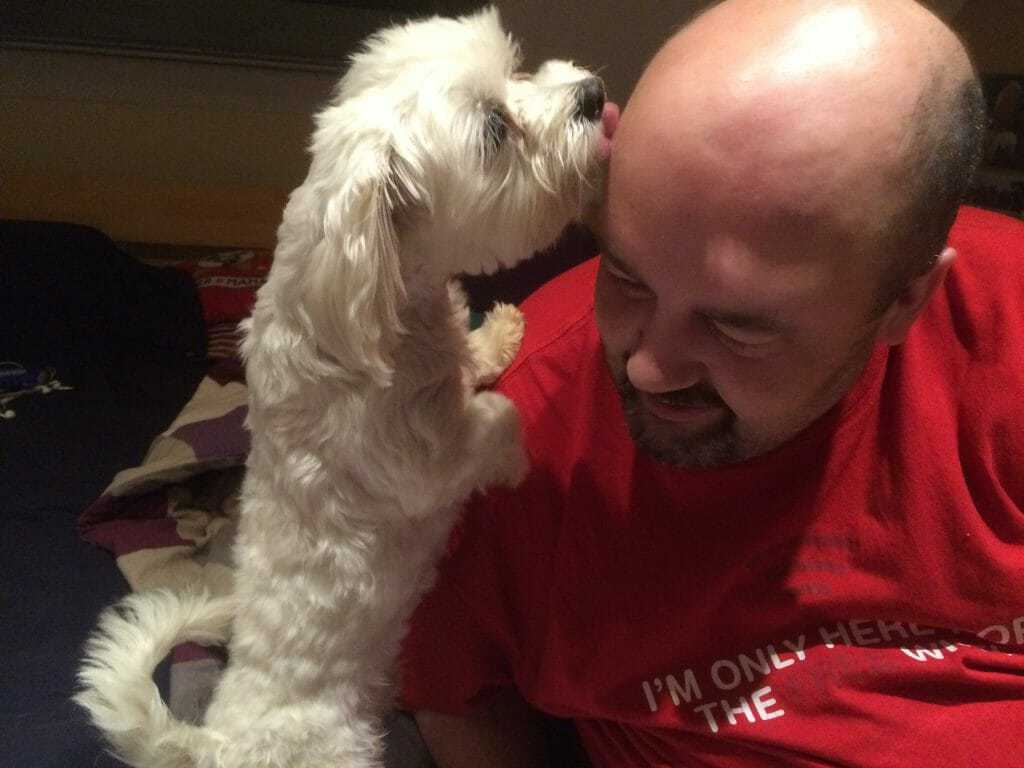 I have to emphasize this is only a theory, but it is one which has been mentioned by several people around us.

I have a variety of health issues which require daily medication. This includes epilepsy, clinical depression, anxiety, and high blood pressure. So you could say that I am fairly medicated up to the eyeballs on a daily basis with what I need to get me through the day.

It has been suggested that Schlumpf can smell my medication through my sweat glands and is attracted to it. That is a polite way of saying that some dogs may perhaps be drug addicts? The medication seems to taste good to him.

If it’s true, it would actually explain a lot. He only licks me, not my wife. So it’s something about me only that makes him want to lick my face, head, and hands. And recently when I started to try to forcibly stop him from licking me, he went rather crazy as if he was having withdrawal symptoms.

Dogs Lick Because They are Anxious? 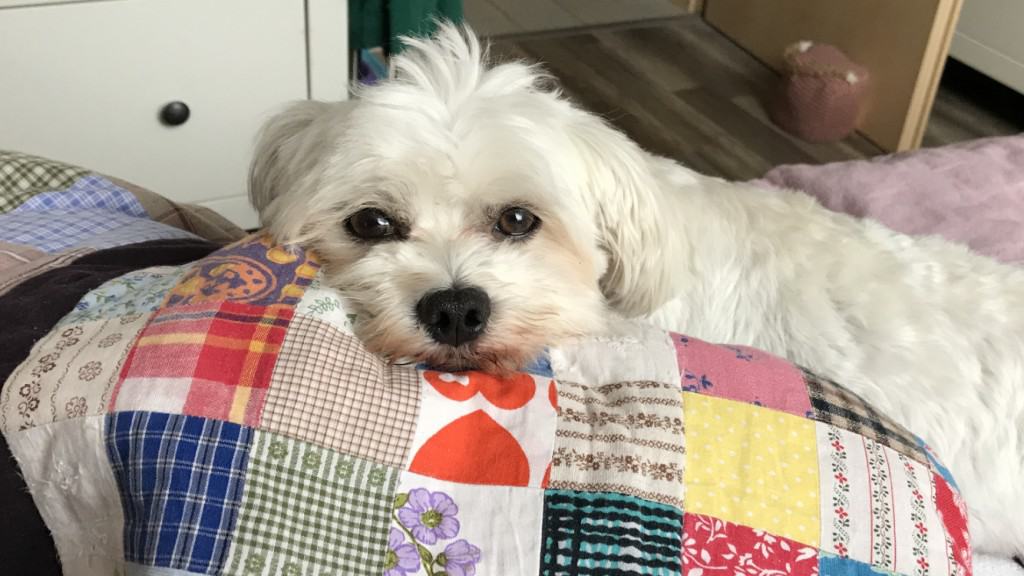 When we are out walking dogs, he barks – a lot. At dogs, cars, buses, people, the whole works. He is lovely and we love him to bits, but sometimes walking with him is not exactly the dictionary definition of relaxing!

It was suggested by a dog trainer that we hired that perhaps Schlumpf has anxiety issues. That he feels the need to protect us when we are outside from things he considers to be risks. So following on from that logic, it stands to reason that the alleged anxiety can be the cause of the licking too.

Schlumpf likes to act macho in front of bigger dogs but in reality, there are some things that scare him such as loud noises and high-pitched noises. The licking could be his way of simply trying to calm down.

Dogs Can Taste Or Smell Food Particles On My Skin 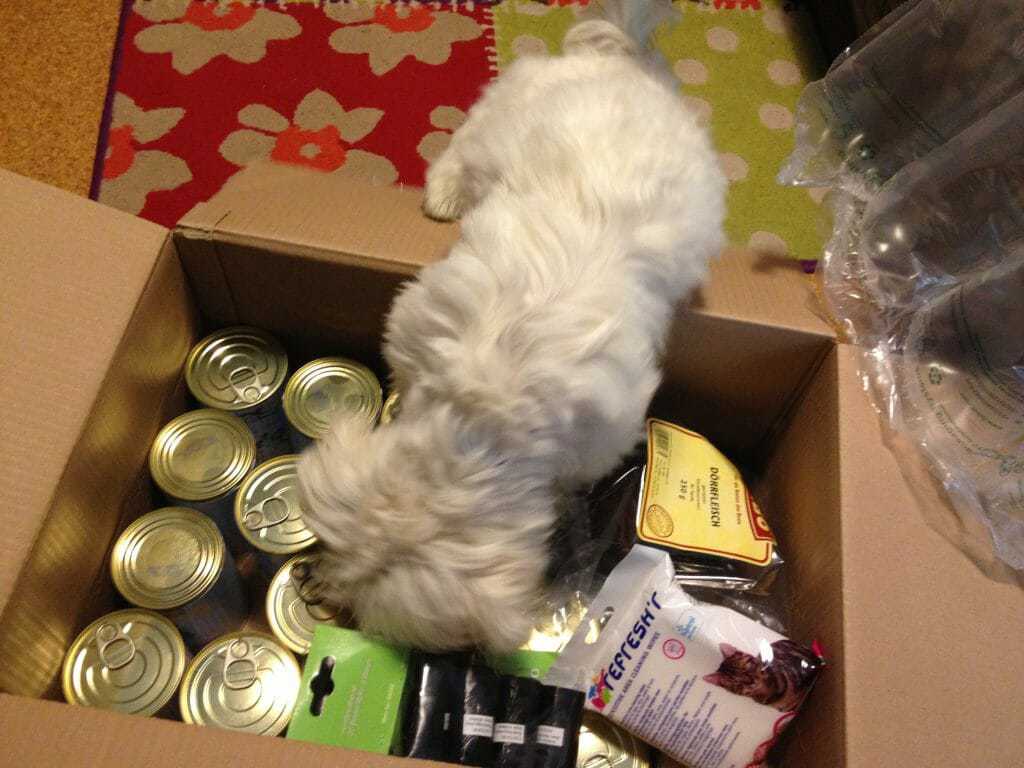 I try to be a tidy eater, but everybody always gets something on their skin or face from dinner. It’s unavoidable. Whether it’s the scent of a delicious sauce, the juice from a tasty steak, or a cornflake stuck in my beard, you can be sure that I will accidentally overlook something. You can also be sure that the dog, with his superior smell, will NOT miss it.

I am not totally convinced of this option for his obsessive licking as he tends to lick behind my ears a lot, and I would sure like to know how I managed to get my dinner round there.

Dogs Are Trying to Say Something 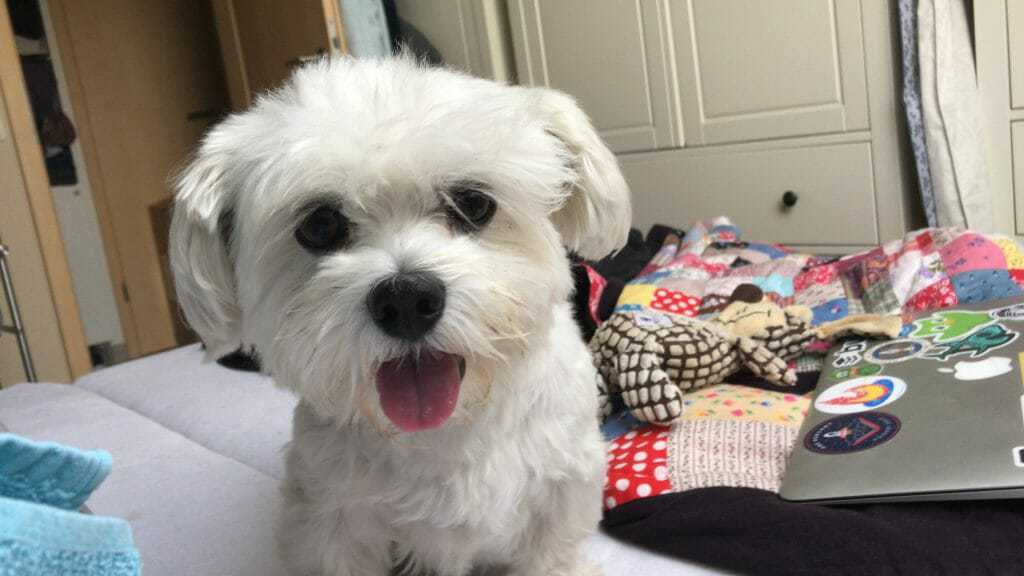 Unless you believe Disney, animals can’t talk to you the way humans can. So dogs have to find other ways of communicating. For Schlumpf, this is often a soft bark (“ruff!”), poking me with his paw, standing on my chest, or pushing his paw into my testicles (he’s not stupid – he knows how to get my attention!).

But some dogs try to get their message across by simply licking you, a possibility raised by famous trainer Cesar Millan. But considering how often and how intensely Schlumpf licks me, I can’t believe there’s something wrong every moment of the day. My dog is licking me so much he must have a lot to tell me? Some dogs have a more pampered life than Julius Caesar. 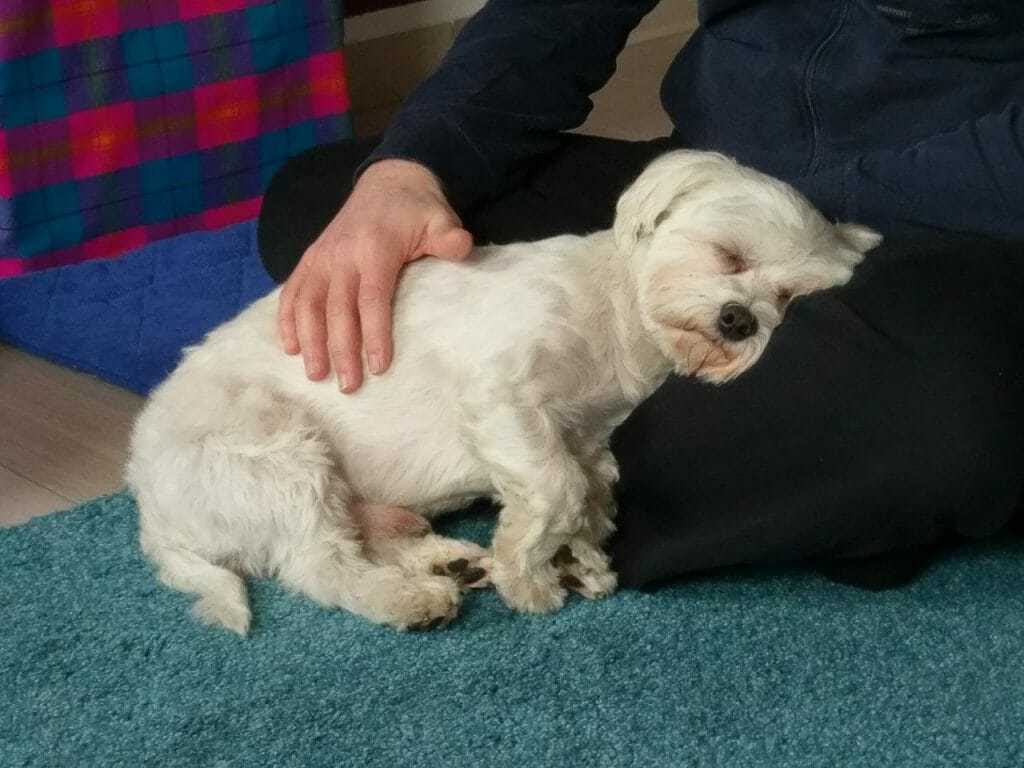 As well as the medication theory, I am more inclined to believe that my dog licks because he is simply trying to be affectionate. Sure he’s overdoing it by a margin of a thousand, but in his mind, maybe it’s just his way of saying “I love you daddy, now feed me!”

He loves his hugs and likes to use me as his comfortable mattress. Maybe it’s just wishful thinking on my part but maybe the dog licks are just a natural extension of that sign of affection? Or do some dogs want attention?

So What Do I Do To Solve This Problem? 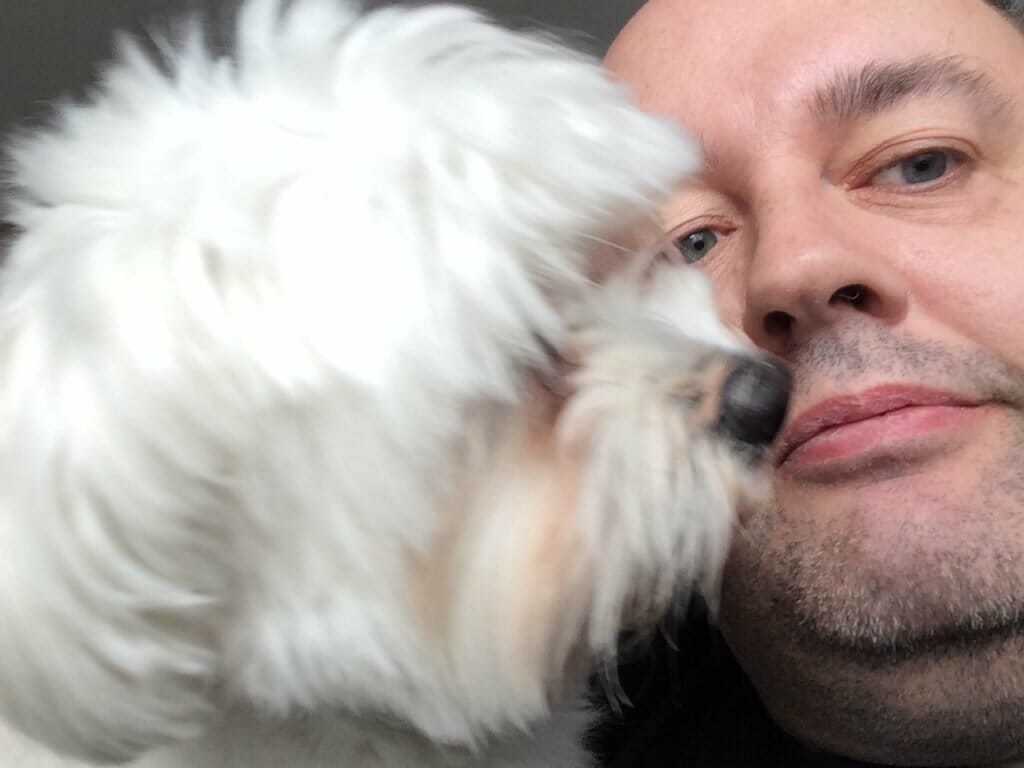 So why does my dog lick me? Both humans and animals express affection in different ways. Humans kiss one another and animals lick. I like to think Schlumpf is just feeling a bit cuddly and chooses to express it in the form of his bad breath and his slobbery tongue. Perhaps some dog breeds may lick more than others to show affection. Licking may also be a natural behavior – as a puppy, a dog would lick the food around the mouth of his mother.

In the end, I probably have to just gently push him away after a few seconds of excessive licking. I don’t want him to think his affection isn’t wanted but at the same time, he has to learn that there are limits. Some dogs love to lick just a little too much.