Hollywood often portrays wolves as dangerous, mysterious animals, but truthfully they have more in common with our beloved dogs than most people realize. Both are beautiful, intelligent, and complex creatures, and both are worthy of our respect. In my time volunteering at Shy Wolf Sanctuary, I had the opportunity to work with wolfs one-on-one and see just how much they share with their domestic relatives. Whether your dog is a Chihuahua or a German Shepard, they all have wild roots, and learning about those roots will help you understand your dog even better. 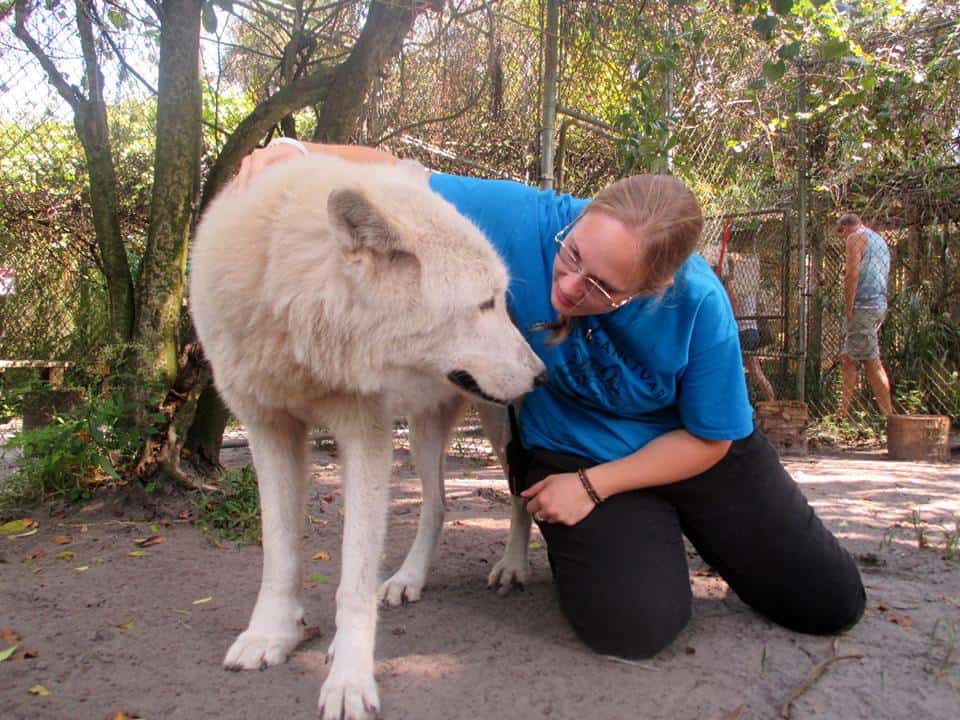 In the time I spent volunteering at Shy Wolf Sanctuary, I had the opportunity to work one-on-one with many special animals including Tien, a gray wolf.

1. Wolves and Dogs Are Closely Related

Despite the huge variety of domestic dog breeds, all dogs descended from wolves. They shared a common ancestor with today’s gray wolves up to 40,000 years ago. To this day, domestic dogs and gray wolves share approximately 99.9% of their DNA. Hybrids between them have been common throughout history and the modern era, as well.

As you might expect with so much shared DNA, wolves and dogs share a lot in common physically. They are incredible runners, great swimmers, and great at hunting—whether they’re chasing a deer or a dog toy.

2. Wolves and Dogs Are Both Carnivorous… Mostly

Wolves are strict meat-eaters, although they will sometimes supplement their diet with greens and berries. Dogs may have begun this way, but evolving alongside humans changed that. Although modern dogs require mostly meat in their diet, they have adapted to tolerate small amounts of carbohydrates.

That said, peanut butter is equally popular between wolves and dogs, and both are curious and willing to try new foods at least once. 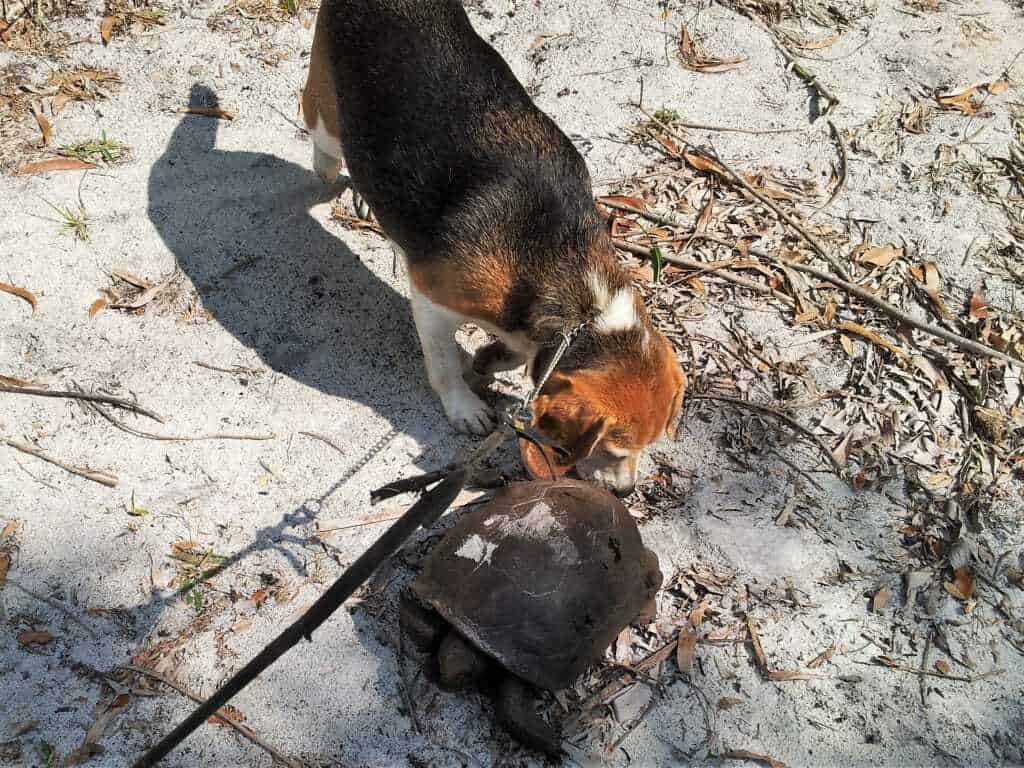 Gunther the beagle inspects a tortoise in the woods in Florida.

3. Wolves and Dogs Are Both Playful

Most people imagine wolves as stoic and serious. And, while they are certainly capable of great focus, they are no strangers to having fun. Wolves and dogs both love to play among themselves and with others. Dogs love to romp around with their housemates, whether they are feline, canine, equine, or human.

Although wolves and humans have a lot less interaction, wolves that are accustomed to human company love to play and wrestle. In the wild, they’ve been known to play with other wolves and also frequently with ravens. On rare occasions, they’ve also been known to befriend bears. 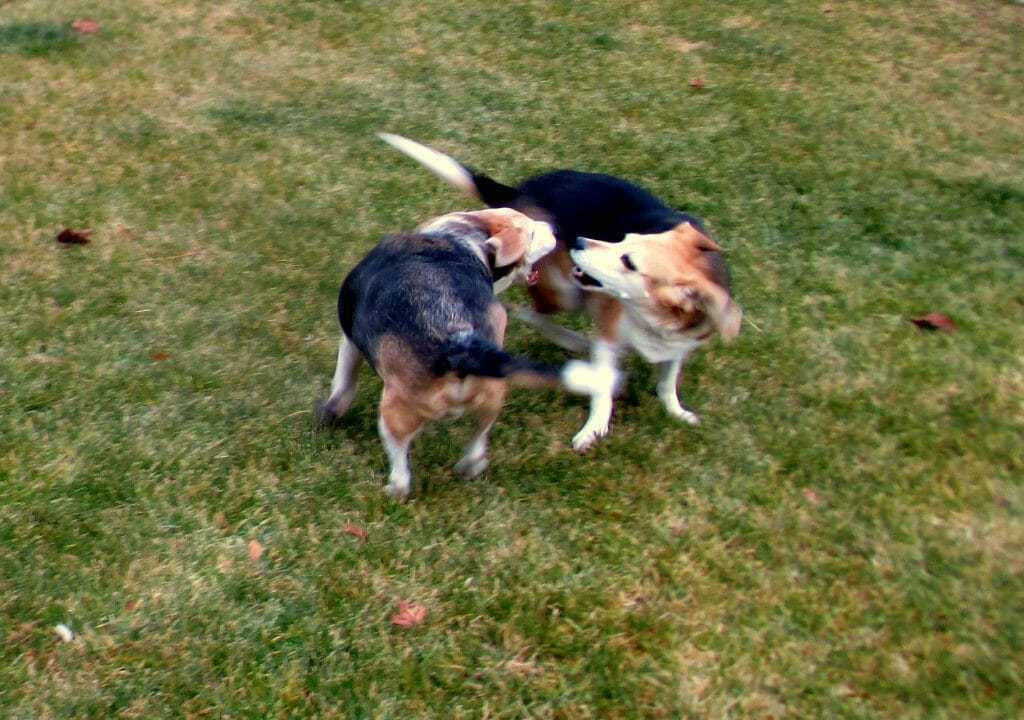 Joey and Gunther love to play, especially before they go for a walk!

4. Wolves and Dogs Both Love Attention

Contrary to popular belief, once you’ve earned a wolf’s trust they bask in attention and happily roll over for belly rubs. Sometimes they have an ulterior motive… such as stealing whatever you have hidden away in your pocket, but the fact remains that they love being doted on as much as their domesticated relatives. Wolves and dogs give thanks for any love shown to them in similar ways, too—by licking your face, wagging their tails, and leaning in for more.

Dogs are more likely to approach strangers, and wolves tend more toward caution, but both species appreciate a healthy dose of love.

5. Wolves and Dogs Use Similar Communication

There are some differences in how dogs and wolves communicate, but there are more similarities. Both howl—although dogs may yip more while doing so—and both bark—though wolves only bark rarely. Both whine and whimper and growl. They share not only verbal communications but also body language. Raised hackles are a universal warning sign between dogs and wolves, and both species wag their tails with joy.

Other nuanced body language is similar as well. A stiff, upright tail is a warning sign. A tail tucked tight between the legs signals fear. Ears perked way up indicate alertness and flattened back show extreme displeasure. And whether they are a dog or a wolf, a tail windmilling in circles is a sign of a very, very happy pup. 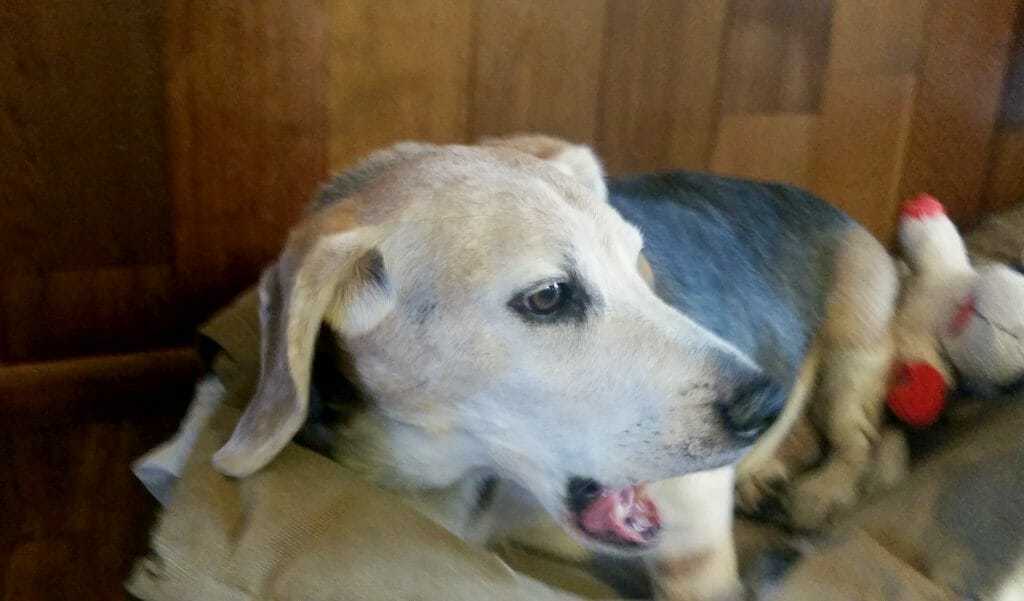 Although beagles and wolves both howl, the sound is very different.

6. Wolves and Dogs Have Incredible Noses

I once heard that a wolf’s (and dog’s) sense of smell tells them as much about the world as our eyes tell us. Both wolves and dogs have pretty good vision, but their noses are so sensitive that they see an entire world of details with it. They can smell what you ate for breakfast, what you have in your pocket, the cut bandaged under your jeans, and so much more.

This incredible sense of smell is what enables dogs to be trained to warn for seizures, dangerous insulin levels, illegal substances, and find survivors in the rubble of a natural disaster. Wolves use this sense in different ways in the wild, especially for hunting, but both species have profoundly sensitive noses. 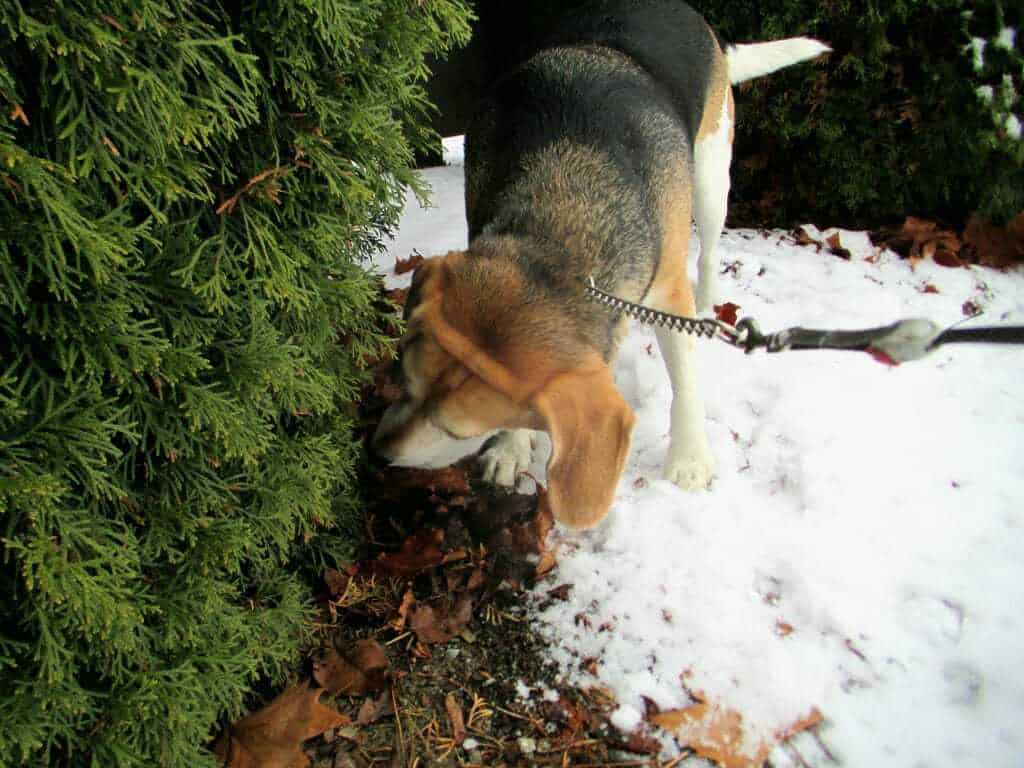 Joey sniffs the base of the shrub where he recently encountered a squirrel.

7. Wolves and Dogs Are Both Social Animals

Wolves, dogs, and humans are all social animals. Because we are social and they are social, it’s no wonder that our ancestors gravitated toward wolves and lived alongside them.

Wolves form a family unit in the wild called a pack. There are a lot of myths about pack mentality and how wolf packs work. The outdated image of wolves fighting ruthlessly to establish an alpha has been proven wrong. In situations with less human intervention, wolf packs are, essentially, extended families. They stick up for each other, they raise pups together, and they take comfort in each other’s company. And while they may bicker sometimes, they don’t fight any more than human families do, and usually, the arguing is over with quickly and peace resumes.

In a way, dogs form packs as well. They bond with other animals in their household and with humans, too. Our dogs take comfort in our presence, look to us for protection (and often offer it as well). They readily learn from us and communicate with us. They are family to us, and we are family to them as well. 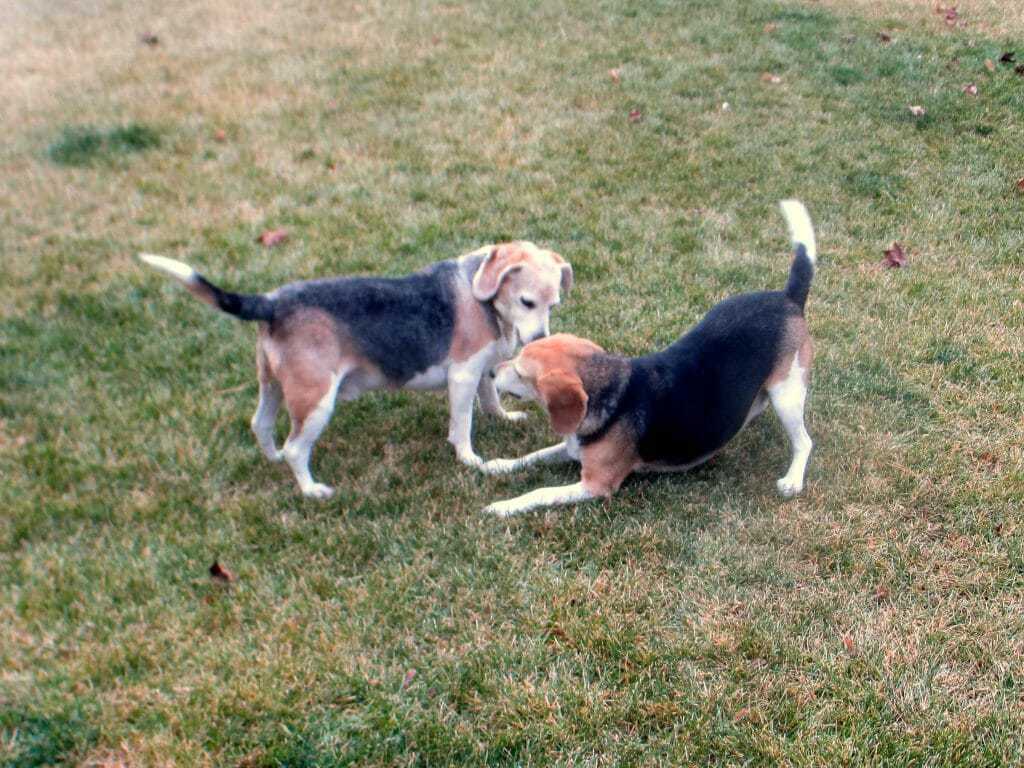 Joey and Gunther greet each other outside in playful fashion.

Your dog might enjoy digging in the backyard, but they aren’t the only canine who loves to excavate. Given enough time, wolves happily dig holes that are ten feet deep. Both wolves and dogs do this in the heat to make a nice, cool spot to rest. They may also dig out of boredom, curiosity (if they smell something tantalizing underground), to hide a prize, or to create a safe space.

If your dog is a professional digger and your yard looks like swiss cheese, there are steps you can take to curb this habit, at least.

9. Wolves and Dogs Have Excellent Memories

Be careful what you say to wolves or dogs. They understand more than you realize and have long memories. They always remember who was kind to them and who was not. When you pull out the wrapping paper or holiday decorations, they’ll remember. Around our house, when the winter décor comes out you can find Gunther staring longingly at the tree or sneaking into closets to look for hidden presents.

Even if you are away for a long time, your dog will remember and miss you. Wolves’ memories are just as long. If you were kind to them, even if it was a long time ago, they will remember and greet you again with love and excitement. If you slight them, though, they will hold a grudge forever and won’t want anything to do with you. 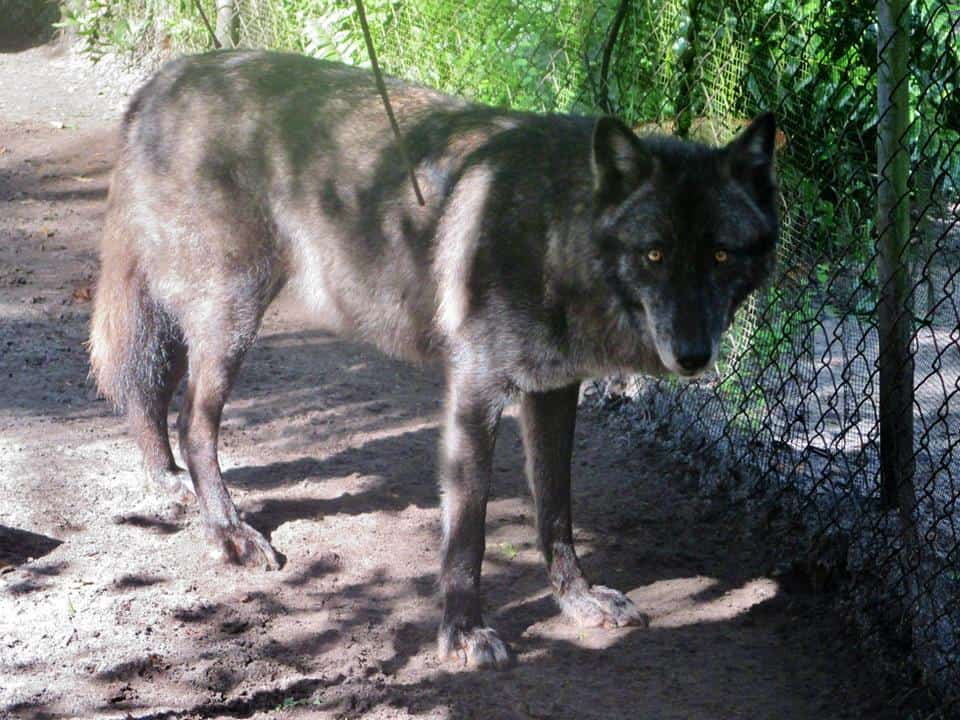 Wolves are cautious by nature, and usually only approach people they remember being safe.

10. Wolves and Dogs Are Both Motivated By Food

Because of their strong sense of smell, wolves and dogs are drawn to the aroma of food and will do just about anything for it. Wolves will bowl over anything in their way to get to food and will follow you anywhere if you hold it—but be careful not to get your fingers caught in the fray. Dogs aren’t too different in this regard, which is why treats are such an effective way to teach dogs new tricks.

It’s easy to see where the phrase “wolf down your food” comes from, too. Wolves can devour a chicken breast in just a couple short seconds. They seem to inhale their food more than chew it. Dogs make a valiant effort to do the same whenever especially tasty morsels come their way, too. 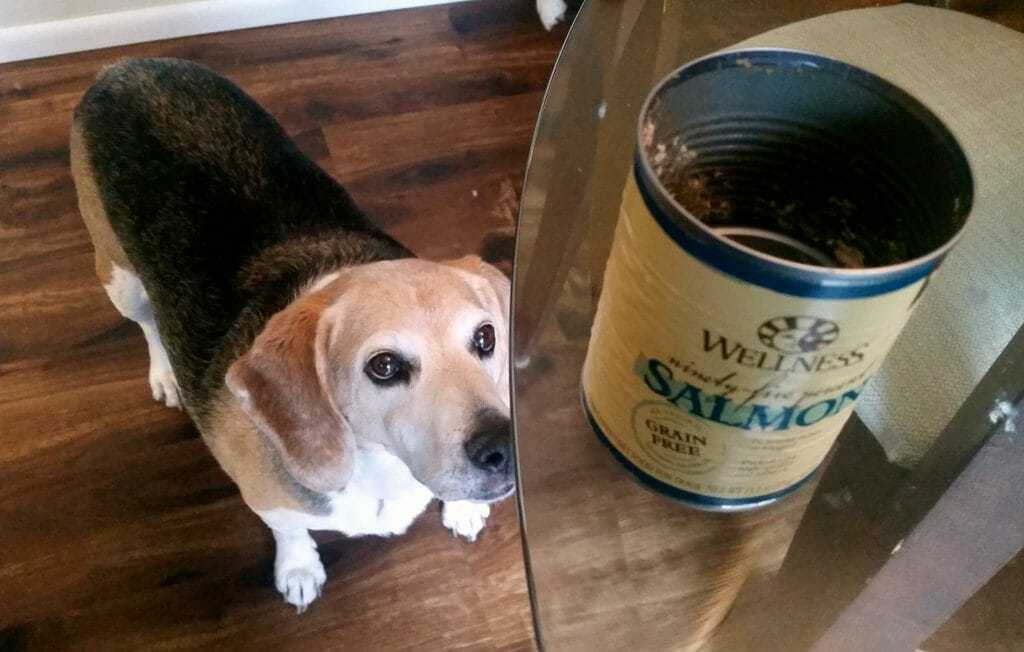 Despite usually being stubbornly independent, Gunther will do anything for a favorite treat.

11. Wolves and Dogs Both Have a Talent for Mischief

Wolves may look regal, but don’t let them fool you. They are expert pick-pockets and will joyfully rob you blind. This isn’t out of malice—it’s out of curiosity. I’ve seen a wolf lay down to beg for a belly rub as a ruse, and then try to very carefully steal the glasses right off a woman’s face. The heist was unsuccessful, but a great example of the incredible mischief that wolves get up to.

Dogs can be similarly devious. I’ve both seen and heard instances where a dog barked at the door to distract their owner and then ran over to eat their owner’s food while they are at the door. Our dogs have a habit of holding things ‘hostage’ until they get their walk in the morning. Important papers, toilet brushes, prized socks…. They don’t hurt whatever they grab—they just use it as leverage to get what they are really after.

Though their mischief can be equal parts frustrating and funny, these tendencies to get into trouble show exactly how intelligent wolves and dogs are.

12. With Either, You Must Earn Their Trust

Wolves and dogs can both be incredible friends to humans when they open up. Building trust is key to befriending them, just as it is between humans. Wolves and dogs must feel safe before they truly let their guard down. Once they do, they are incredible company. Dogs have a huge variety of different personalities, just like people do, and wolves are the same. Some are shy and quiet, others are rambunctious and playful. Others still are calm and steady. No matter what type of personality a dog or wolf has, they are all amazing, intelligent animals full of curiosity and love. 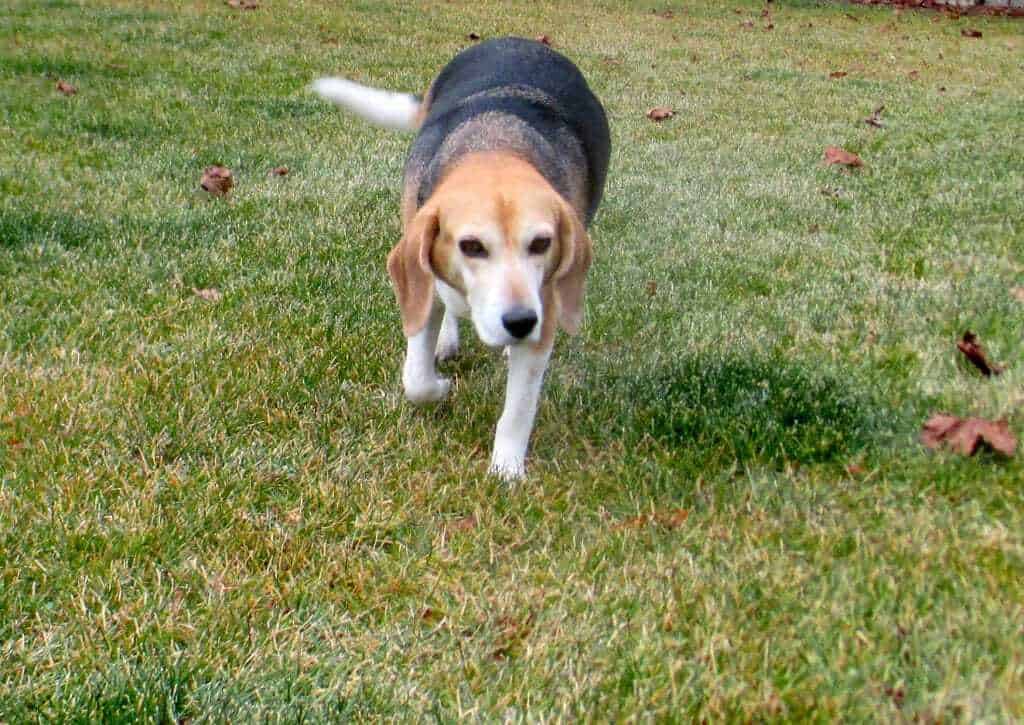 The next time you are out walking your dog or watching your pup play in the backyard, take time to appreciate their wild heritage and remember, no matter how small or big they may be, they have more in common with wolves than we might realize. There is a bit of wolf in each and every dog, and that is something to be admired. 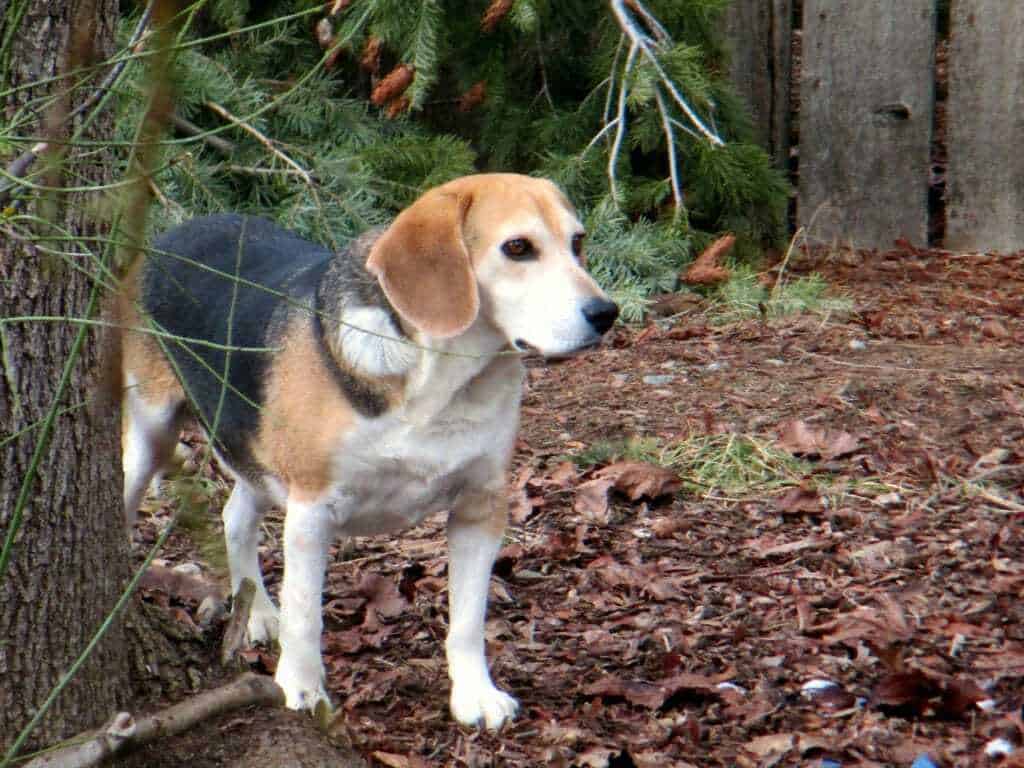 Joey stands vigilant under the shelter of a nearby tree, watching for deer and squirrels.