Pooping is a normal, healthy function. One that we don’t often like to think about with humans or dogs, but it’s a natural part of life. It keeps us healthy and functioning properly. It’s more concerning if something isn’t pooping. Dogs need this function as much as people do.

But how much is too much? If your dog is going several times a day, do you need to be concerned? Is a vet visit or emergency coming up?

It depends on your companion and the habits you and your furry friend have settled into. A dog’s size and breed can factor into it, but so can things like diet and food amount.

As disgusting as it may sound, you also need to pay attention to what exactly is coming out of your pup’s system to determine if there’s a problem.

How Many Times Should Your Dog Poop?

A lot of different factors can affect how many times a dog poops in a day, but the general consensus is that they’ll go between one and five times a day. Any dog needs to poop at least once a day.

A dog’s age, weight, breed, and other things can all affect this. Puppies are more likely to eliminate closer to five times or even more. Their intestinal systems aren’t fully developed and so food is digested quickly. 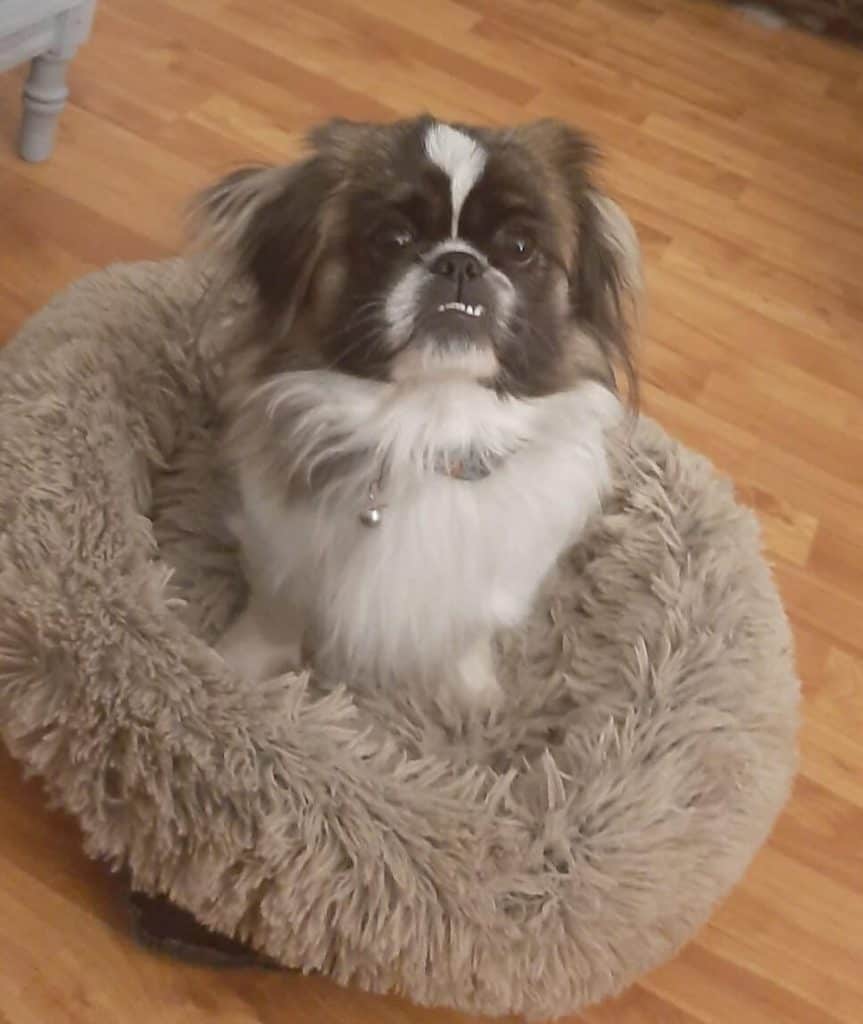 Dogs generally poop between 1-5 times a day depending on lifestyle, size, and breed.

How often your pup will need to go depends on their lifestyle too. If they’re exercising often and moving about more, they may need to go to the bathroom more.

How often you feed them can also factor into it. If you only feed them once a day, they may poop less often than those who eat multiple meals. They digest smaller meals faster than one large meal.

The important thing to note is that once you and your pup settle into a certain lifestyle, their bathroom schedule should also be more or less consistent.

Pooping 2-3 times a day is usually fine as long as that’s how often they normally go. It’s okay if there are a few days where they have one less movement or one more than usual, but it should be mostly consistent.

For example, my Pekingese Freya goes once a day now. Every day she has one movement in the morning. There are a few occasions where she also needs to go at night, but they aren’t normal. These days are usually just when she’s gotten more treats than usual.

If your pup is suddenly eliminating 2-3 times more with no obvious lifestyle changes like feeding or diet changes, something may be wrong. You may need to look at their mess and confirm that there isn’t an issue.

A dog’s diet plays a big role in how many times they’re going to the bathroom. It’s best to get them good, balanced food with plenty of proteins and nutrients and good meat. Avoid foods with too many carbs. 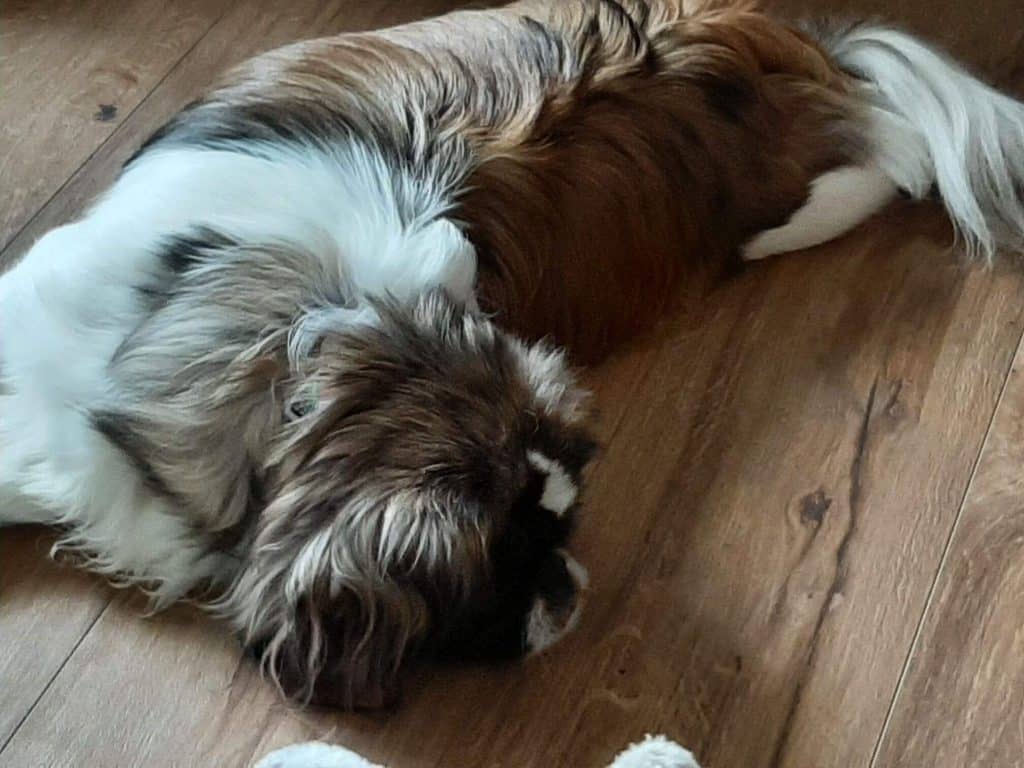 If your pup’s diet isn’t balanced or they have a problem with their food, they may poop more.

Even then, some foods just don’t go with certain individuals. If a food doesn’t work with your pup’s stomach, they may poop more. If they’re eliminating more than normal after a diet change, the new food may just not have the right ingredients for your companion.

Diet changes can also cause upset stomachs and more pooping if you try to switch them to a new food too fast. To avoid this, make sure you’re gradually switching them over to any new foods. Start with feeding them about 80% of their old food with 20% of their new and gradually add more throughout the week.

If you give anyone too much food, they’ll poop more to get all of it out of their system. Not surprising, right?

If you’ve increased your pup’s food portions or just been overfeeding them treats or table scraps, they’re probably going to need to poop more as a result. That said, they still shouldn’t be going more than five times a day.

If your pup is also vomiting, a bit bloated, or seems sick, you may need to cut back on how much you’re feeding them. I know it’s hard to resist, but always remember that they don’t know when to stop themselves. It’s up to us to learn to say no, because they’re not going to.

If your pup is suddenly pooping a lot and multiple times in a short period of time, they may have diarrhea.

Diarrhea is pretty easy to notice. Usually, a pup’s stool will be more or less solid, but with diarrhea, a stool will be more liquid-like and runny. I know it’s gross, but it’s something you need to watch for. Like with humans, it’s an indicator that your pup’s stomach isn’t at 100%. 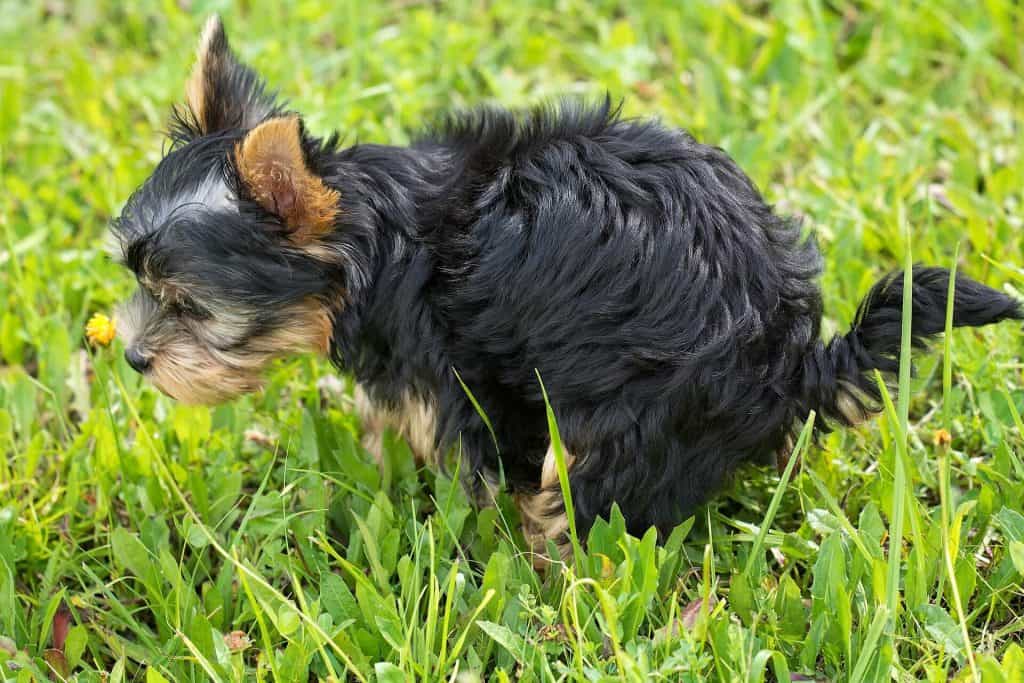 A dog with diarrhea may need to go more frequently. Stools will be runny and liquid-like when they should be solid.

If your companion suddenly has diarrhea, consider what they’ve been eating. They could have had too many treats, or a new treat may have disagreed with them. They could have also picked up something they shouldn’t have.

A pup with diarrhea will poop way more than usual trying to rid themselves of whatever is causing the problem. It should resolve itself within a day or so if it’s not serious. You may need to withhold food for half a day or so while they’re purging their stomach or switch to a bland diet that won’t upset their stomach further.

Certain medications prescribed by the vet may cause a dog to have more bowel movements than usual, especially if they’re meant to deal with constipation. Some medications may also upset your pup’s stomach a little. Your vet should tell you beforehand if this is the case, or it may be on the label.

Always keep track of what medications you’re giving your pup and only give them at the discretion of a vet.

A stressed and anxious dog may eliminate more as a result. Their stools may also be runnier, as anxiety can upset their stomachs. Humans often have the same problem.

If your companion’s environment has changed from a new family member, a new home, a lost family member, or anything else, they may be more stressed than they’re letting on. If you notice they’re going to the bathroom more or that it’s clearly not a healthy stool, they may have an upset stomach from the stress.

Make sure to keep an eye on your pup’s stress and manage their anxiety. Once things settle down, they should naturally go back to their normal bathroom patterns. 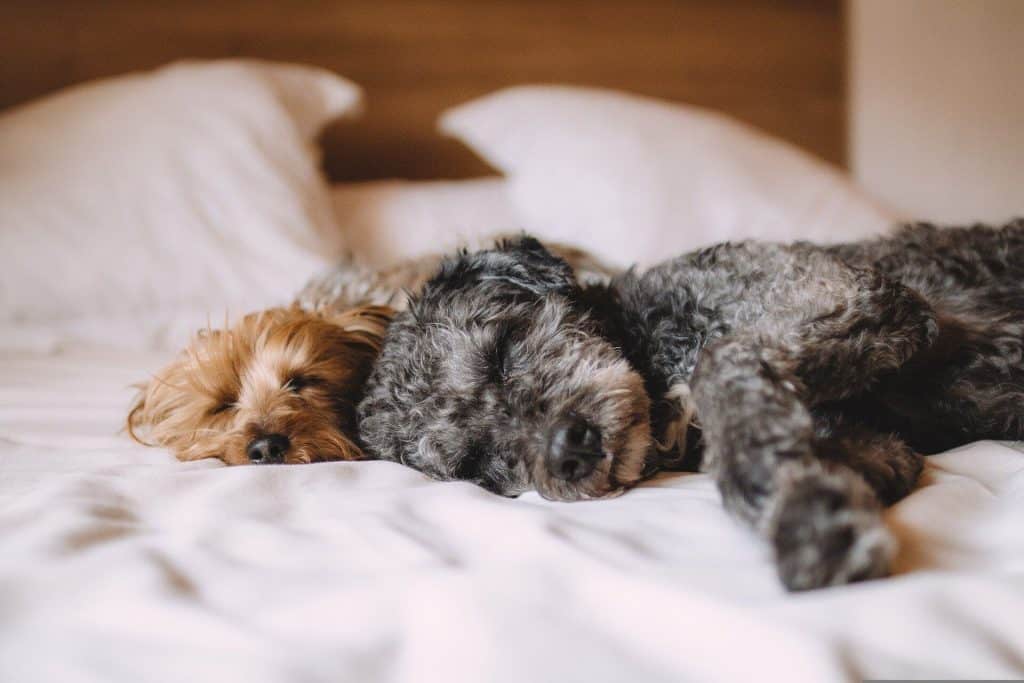 Stress and anxiety can give your companion an upset stomach, potentially causing them to eliminate more.

While an extra movement here and there isn’t a cause for concern, an adult dog shouldn’t be pooping more than five times a day. If they are, you may want to consult a vet, especially if it seems like they constantly have an upset stomach.

It’s also concerning if your pup constantly has diarrhea. Every once in a while is one thing, but it shouldn’t be a constant issue. If they have diarrhea for more than 24 hours or it seems to be a constant occurrence, you may want to consult a vet. If there’s blood in the stool, go ahead and call a vet right away.

It’s always a good idea to keep an eye on what’s coming out of your dog’s stomach. Again, I know it can be gross, but just glancing can help identify a serious issue.

Color can also be an indicator of a problem.

If your pup is pooping more and with any of these colors, they should be watched and the vet should be informed.

Look out for any other indicators of illness. If your pup is also vomiting, dehydrated, or lethargic, those can all be red flags that something is wrong.

Pooping is normal, and your furry companion should be doing it at least once a day. It’s just as concerning if they’re not pooping at all. But too much and of a certain type can indicate a problem.

Know your dog and what’s normal for them. If pooping multiple times a day is a normal thing for them, then as long as the stool looks normal there’s probably nothing to worry about. If they deviate from that number every once in a while, there’s no need to panic.

If you have a puppy, you should expect them to poop often until they grow older. It’s normal for them. On the other hand, older dogs should not be going as often.

Watch what’s in your pup’s diet and make sure they’re getting balanced meals. If their diet is balanced, their bowel movements should also be balanced.

If you think something’s up, keep an eye on what exactly is coming out of them. It can tell you a lot about what’s going on with your dog.

Never be afraid to reach out to the vet if you think something’s wrong, especially if your companion has been pooping liquid or different colors for a day or more. It’s always better to be safe than sorry.