If you’ve ever purchased a toy for your child or for a niece, nephew, or just a friend’s kid, you know that there’s something enthralling about the toy section at any store. Dozens and dozens of companies sell toys that spin, rattle, rumble, talk. Toys that stack, fall, sweep, and drop. Toys that look like every imaginable character on the planet: Mickey Mouse, Buzz Lightyear, Paw Patrol dogs, and more — you’ll find it all at your local toy store. Go into your local dog store and you’ll find toys that squeak, chew, fly, and float. But will you find toys that are all those things and more? Toys that in addition to being tasty for dogs, are also adorable to look at?

And does that even matter? ZippyPaws would say that yes, it does, because every single one of their dog toys are completely adorable. While you won’t find TV characters, you will find hand-drawn characters created by the ZippyPaws team. Think a set of pandas in a green bamboo shoot, or a fun blue donut, or a mailbox with stuffed letters to hide inside.

Some ZippyPaws toys rise above the others — we’ve got the best ones listed here. Stay tuned to find out which ZippyPaws toy my Alaskan shepherd, Eira, loved most! 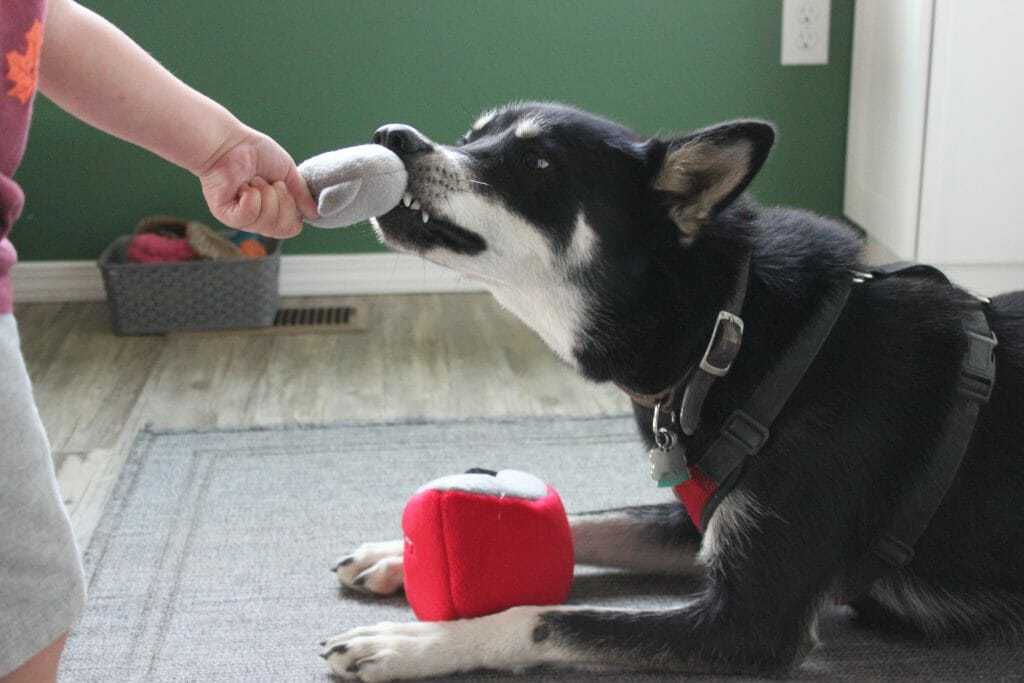 Okay, let’s start with that panda and bamboo set. This bright green fluffy “bamboo shoot” holds three tiny Pandas that you can hide inside and let your dog sniff and dig out. Each panda comes fitted with a round squeaker inside its stuffing for a delectable squeak each time your dog chews it. But make no mistake: this is not a chew toy. If you don’t want your dog to destroy it, put the toy away when you’re not around to supervise! The bamboo hut is an interactive puzzle toy to keep your dog from getting bored — and to give you lots of photo opportunities with your pup. We love this puzzle toy because the panda and bamboo characters are unique: you see a lot of hide-and-seek squirrel toys on the market, but this is the only panda we fell in love with! 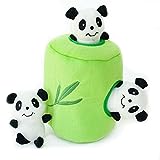 And Eira’s favorite ZippyPaws toy is… the Shark ‘n Ship puzzle toy! Eira loves the bright red “S.S. Zippy” ship, and she and my toddler had a blast playing hide and seek and fetch with the sharks.

They played — I kid you not — for a straight half hour. My son would throw a shark for Eira, and she’d go fetch it before realizing there were two more inside the S.S. Zippy. She’d turn back for one of the sharks inside the red ship, sniff around and use her paws and teeth to extract a shark from its hiding place, give it a few solid chomps and delight in the squeaks. Then my three-year-old would come get the newest shark away from her to throw it before she would realize that — wait! — there was another shark in the ship! So she alternately dug for sharks or fetched sharks and had a ball. The squeaker in these sharks really attracts Eira’s attention: even if she’s searching for a shark in the ship, if my son makes one of the sharks squeak, Eira comes running. 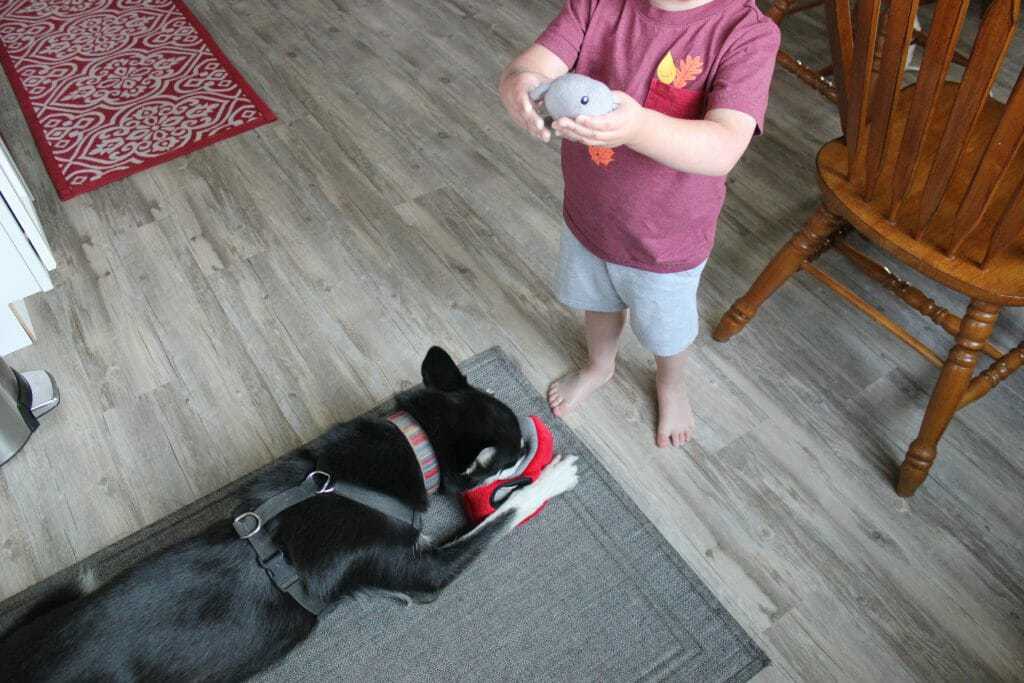 Eira searches for a shark inside the S.S. Zippy while my son gets ready to make one of the other sharks squeak… 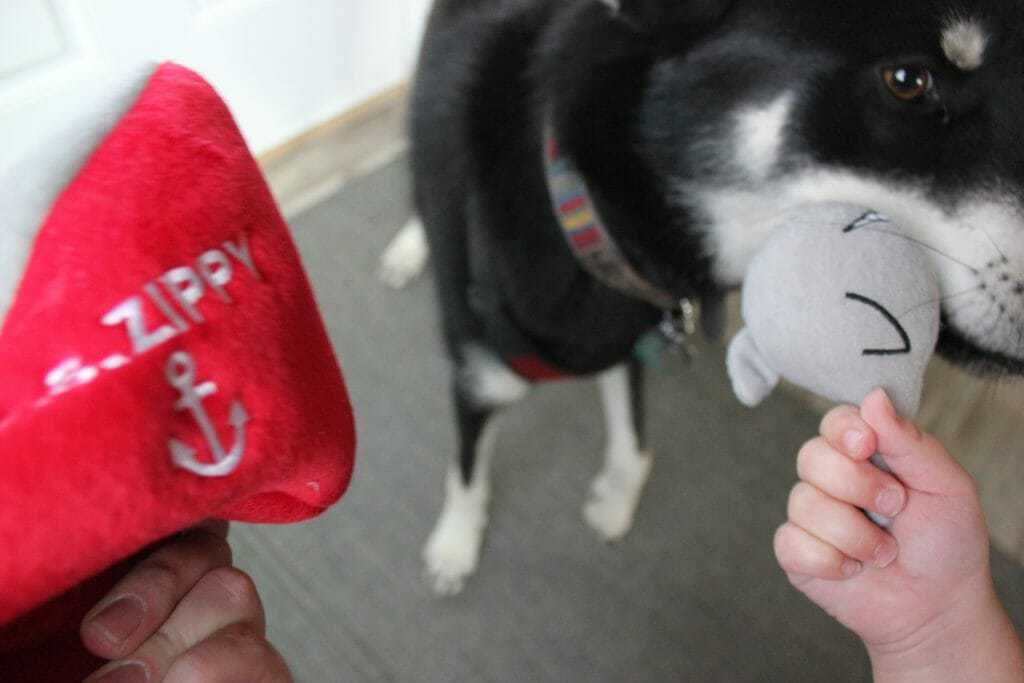 And boom! Up goes Eira to get the squeaky shark.

Even though these are not chew toys, they do withstand the amount of normal chewing that comes in a typical play session. And I’ve found that Eira isn’t interested in decimating the toy, because she only chews it for that delicious squeaky sound. She isn’t chewing like she would a Nylabone or Benebone; she’s chewing for the pleasure of a delightful sound. 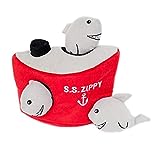 You better believe that once this toy is frayed and ready for replacing, we’ll be replacing it with the…

Unlike the Shark ‘n Ship, the ZippyPaws Holiday Burrow Mailbox only has one hole (with one opening on each end of the upright mailbox) for your pooch to peek into and dig around in — but it still comes with three squeaky letters. If your dog loves to find and destroy your mail, give him this mailbox instead! You can hide the letters deep inside and watch as your dog burrows his nose into the hole to extract each squeaky piece of mail. I love the creativity in this toy: I mean really, where else can you find a mailbox with squeaky, chewable mail for your dog? 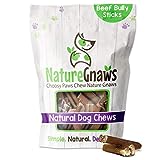 If you gave your dog a cupcake every day, you might find that before long, you had an overweight pup on your hands. That wouldn’t be good for anyone! So instead of giving your dog tasty human treats every day, give her…ZippyPaws squeaky treats!

While this toy may look fluffy and sweet with its specially embroidered sprinkles and lickable frosting, it’s tougher than you’d think. And if you have a huge dog that is really too big to enjoy the ZippyPaws puzzle toys for long, the Donutz toy comes in three sizes — mini, original, and jumbo — to keep any size dog happy. Instead of one squeaker, each Donutz Squeaky Plush Toy comes with two huge squeakers sewn inside.

It also comes in a variety of “flavors”: strawberry, chocolate, blueberry, mint chip, and pumpkin spice, to name a few. 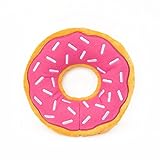 If your dog prefers cupcakes to donuts, this giant fluffy cupcake should suit her needs. It’s stuffed with two huge squeakers for the ultimate squeaky fun, and because it has no appendages (ears, nose, tail, etc) there’s not much for your dog to tear off. Some of Eira’s mastiff friends have this cupcake and it is still intact after weeks of rough play! So if you’re looking for a tasty-looking, adorable treat, this is it. This cupcake comes in blue and pink and is suitable for dogs of any size. 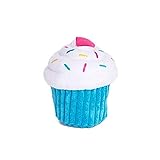 This friendly blue sea-critter features tantalizing tentacles and a hidden grunter. When your dog chews, Oscar grunts. Your dog will go crazy with the fun of trying to find the grunter behind the waving tentacles! If your dog loves to cuddle up with a cozy fuzzy toy, Oscar the Octopus really is a perfect fit: he only has one grunter, so your dog won’t inadvertently make him grunt when she just wants to cuddle. But when she’s ready to play and hear Oscar “talk” back to her, he’ll be ready and waiting with that hidden grunter. 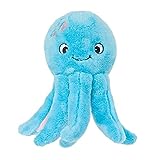 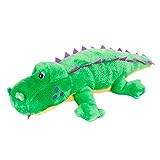 So your dog is one who will rip apart an animal just to get to the stuffing inside…and then spread that stuffing all over your house so that you’ll be finding remnants of it for years to come, and in the oddest places. Fear not, for ZippyPaws has a line of stuffing-free toys that flop deliciously when you throw them or play tug-of-war with your dog. And, if they get ripped in the process, there’s no stuffing to spread all over the place! 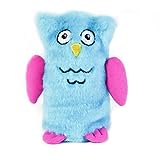 For your bigger dog, ZippyPaws offers a set of long, floppy, stuffing-less woodland critters for your dog to chew, tug, and drag to his heart’s content. Each toy in this set includes not one, not two, but THREE fantastic squeakers to keep your dog entertained for hours. And each animal is 18 inches long, so the size is perfect for your bigger pooches who need more stuffing-free fun to work with. 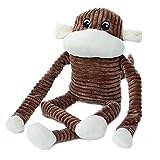 Now you know: ZippyPaws has a whole host of toys that crinkle, squeeze, squeak, and grunt. They’ve got the perfect toy for every dog out there — and even better, ZippyPaws is a relatively new company that devotes a lot of its time, energy, and resources to giving back to dogs and humans in need. So when you purchase a ZippyPaws product, you are helping more than just your own dog.

Which ZippyPaws products has your dog enjoyed the most? Let us know in the comments below! 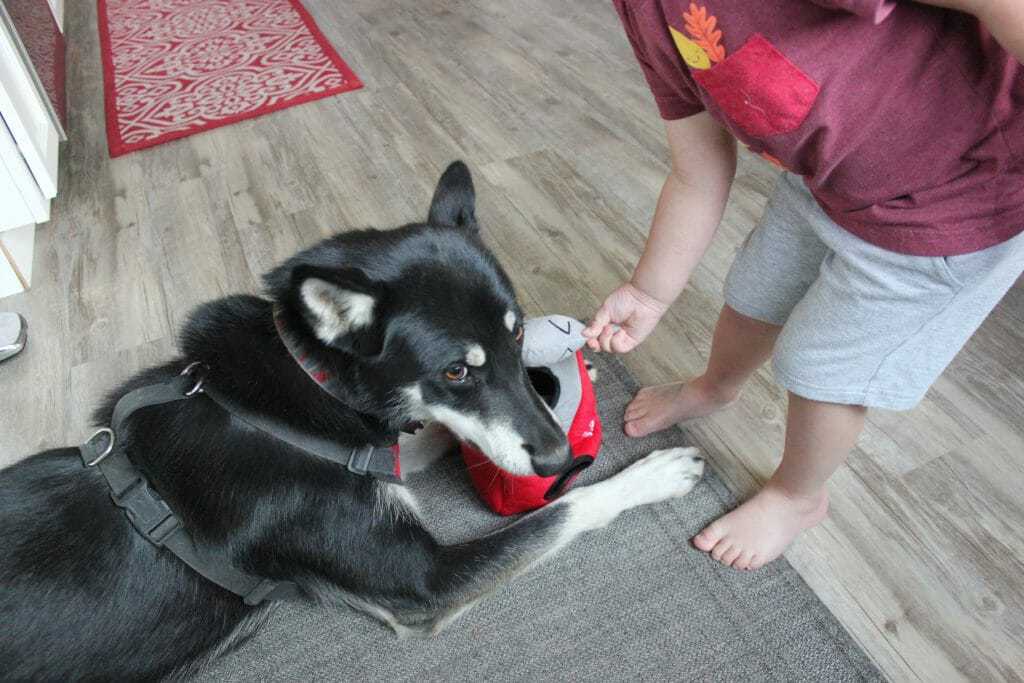 ZippyPaws: fun for the whole family! 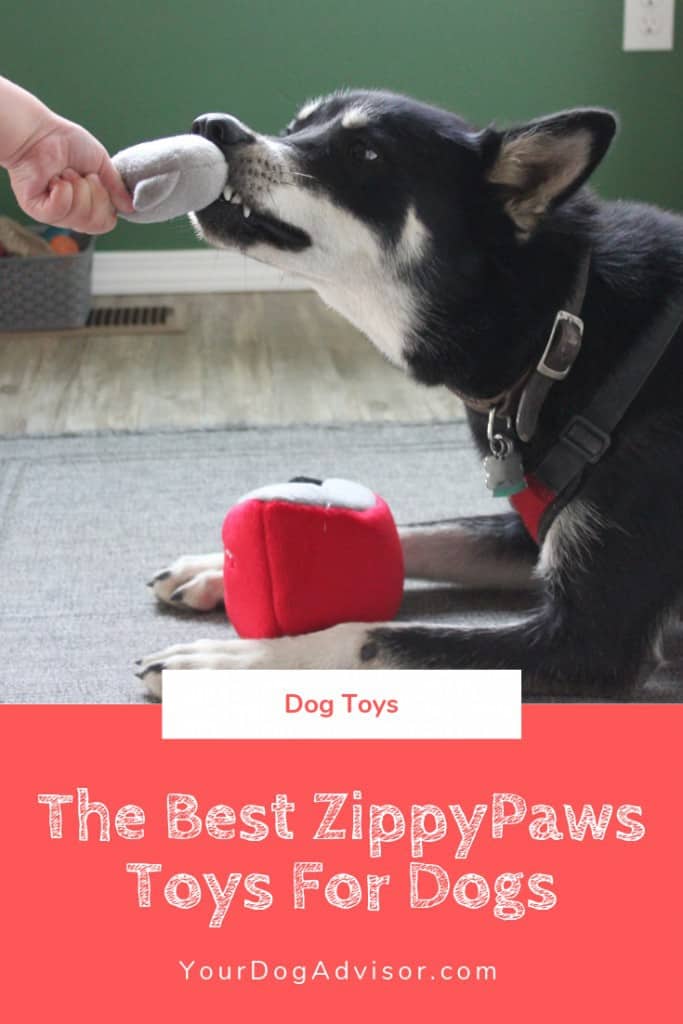