Growing up with two German shepherds meant that I had to find plenty of ways to keep them active, because with German shepherds, activity equals happiness. Neither of my German shepherds wanted to stick around for hours to cuddle. Instead, they’d bring sticks, twigs, even leaves sometimes, and drop them at my feet and then wait, big-eyed, for me to throw the object for them. They were born fetchers, chasers, runners. 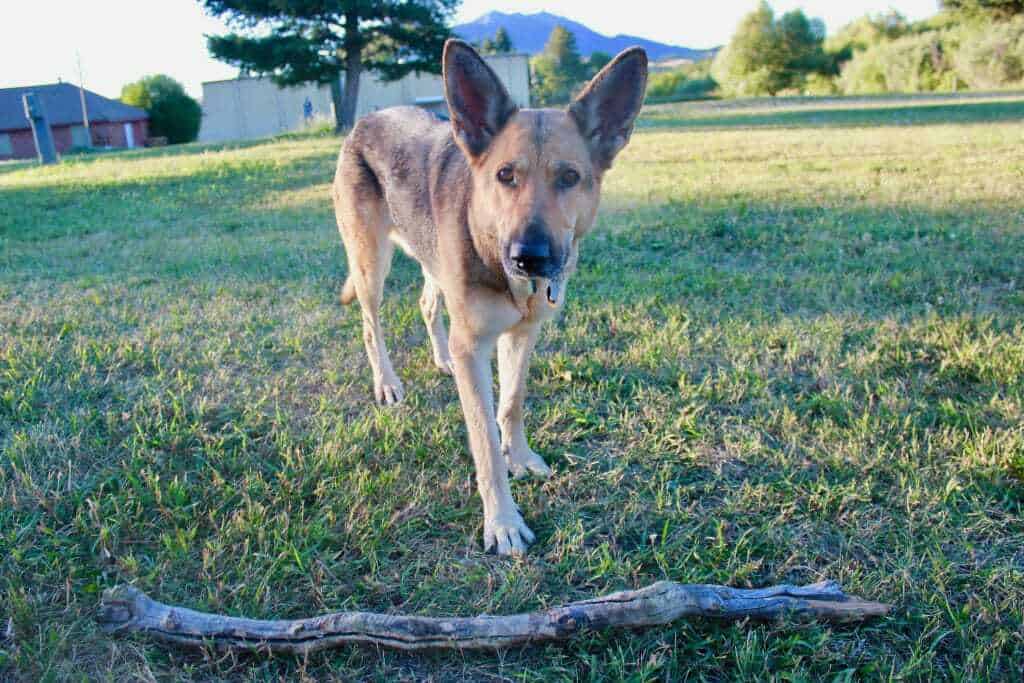 My Dogs’ History With Chuckit! Products

My sweet Bella Marley looks imploringly at me after dropping a stick at my feet.

I can’t even tell you how many Chuckit! Ball Launchers we went through in Clancy and Bella’s lifetimes. Probably dozens. They inevitably got chewed up because as kids, we didn’t always stop them from chewing the plastic of the famous Chuckit! tennis ball thrower. And during the winter months in Montana, we lost hundreds of tennis balls in the snowy field across from our house.

But we were lucky to have that field, and our dogs adored chasing tennis balls on it. Now that my German shepherds are gone, I have Eira, who’s only half German shepherd. She’s not quite as rabid about chasing things as Bella was, but I decided to give her a chance with Chuckit! products anyway. She was almost nine months old when I bought her her first Chuckit! Ball Launcher.

We don’t have a giant field in front of our house, like the one Bella and Clancy had. 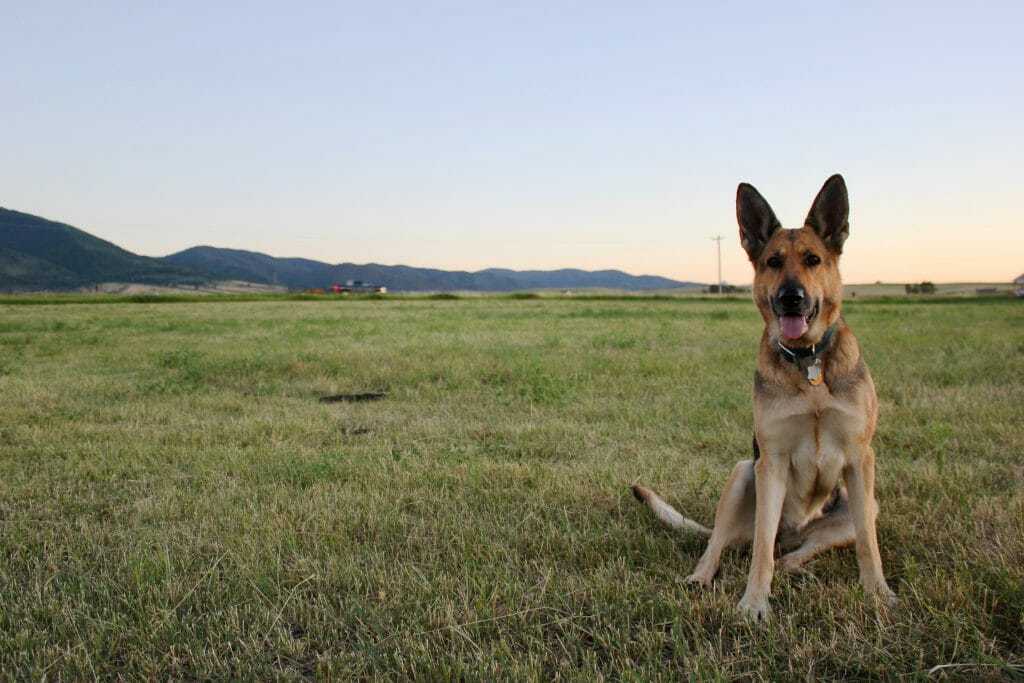 Bella in the giant field in front of our old home in Montana.

But here in Alaska, we do have a decently big backyard. At first, I only tried throwing the Chuckit! with Eira on the leash. She’s still learning how to stick around the house when she’s off the lead—Alaskans say it’s the malamute in her that wants to go exploring. But she is getting better, slowly but surely. 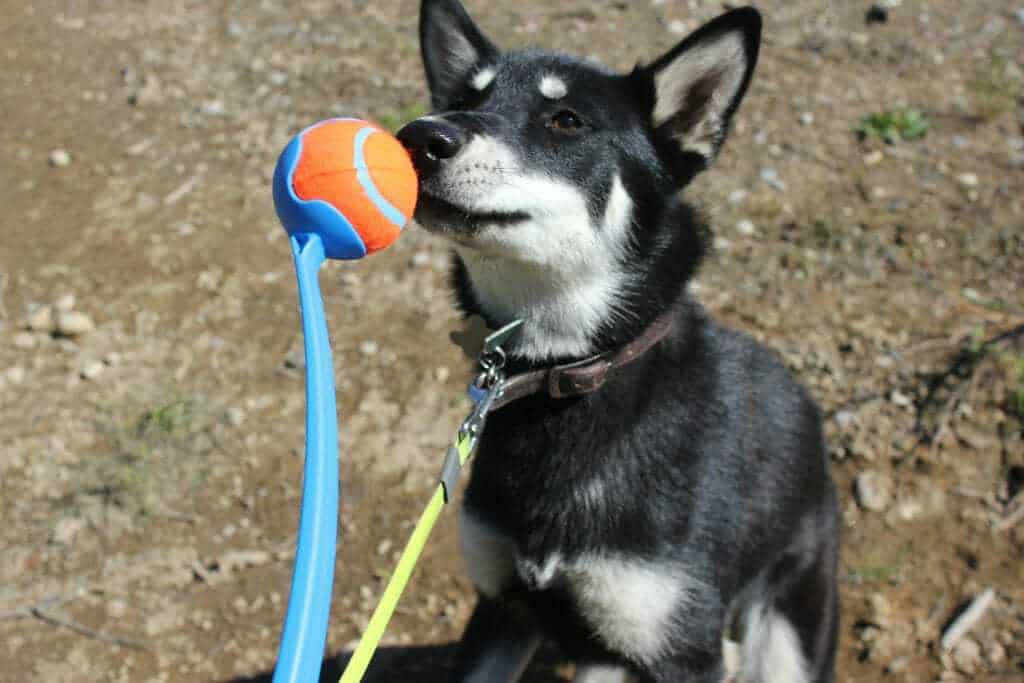 At first, Eira wasn’t sure what to think of her Chuckit! Ball Launcher.

I launched the ball, but not at full force. I didn’t want Eira to yank my arm off the Flexi leash I was holding her on. It bounced along the rocky, undeveloped ground like a mouse scrambling for cover—and Eira loved it. She ran after it, pouncing and pawing like a cat. 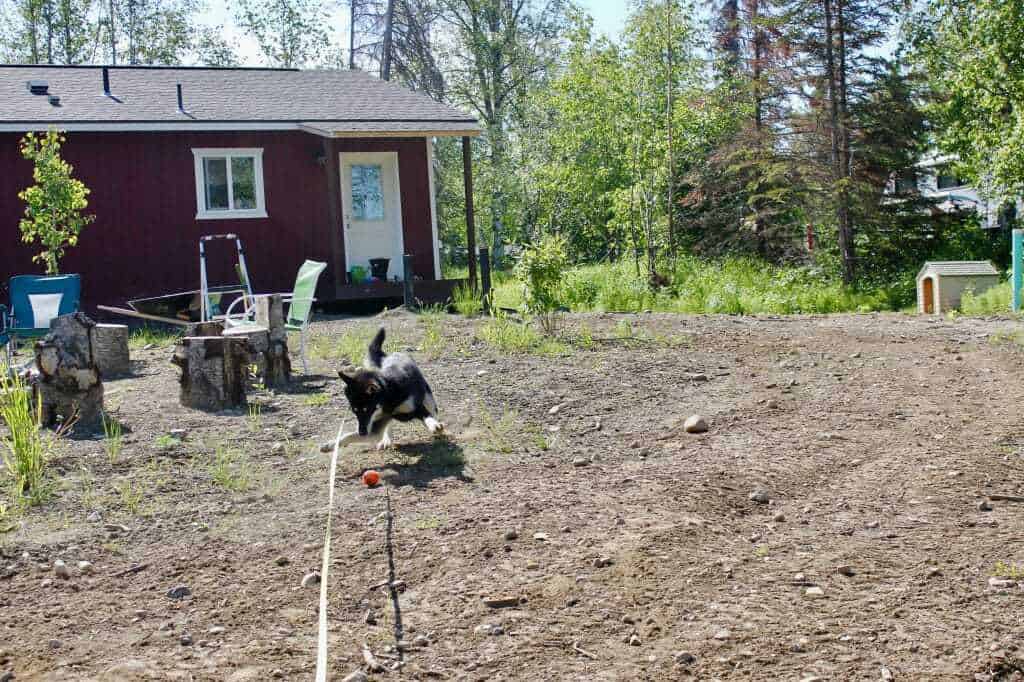 See how she’s pouncing on the Chuckit! ball? It was adorable to watch!

It’s safe to say Eira loves her Chuckit! Ball Launcher. I didn’t want to tire her out, so I only threw it a few times before putting it away. But the Chuckit! Classic Ball Launcher is here to stay. A ball thrower can have its drawbacks, but like many things, when used with moderation it’s a safe and fun toy that bonds you and your dog together.

Out of all her Chuckit! toys, the ball launcher is Eira’s favorite. Watch this video to see Eira and the Chuckit! launcher in action. Note that she’s off the leash—of course she takes off into the neighbor’s yard, but not to worry: she came back!

You can buy your own Chuckit! here. I highly recommend it for active dogs, especially German shepherds and other dog breeds that like to run and chase. 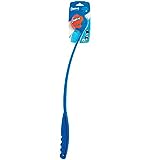 The Chuckit! Zipflight: A Dog-Friendly Frisbee

Because Eira loved the Chuckit! Ball Launcher, I figured she’d also chase a frisbee. But I didn’t want to give her a plastic frisbee that she could chew to bits and possibly choke on. Instead, I looked for a Chuckit! frisbee disc. I found one that looked exactly like a frisbee but was made of durable cloth, but it seemed like it’d be hard for Eira to grasp in her mouth. Instead, I got her a Chuckit! frisbee with a hole in the middle, like a donut: the Chuckit! Zipflight. 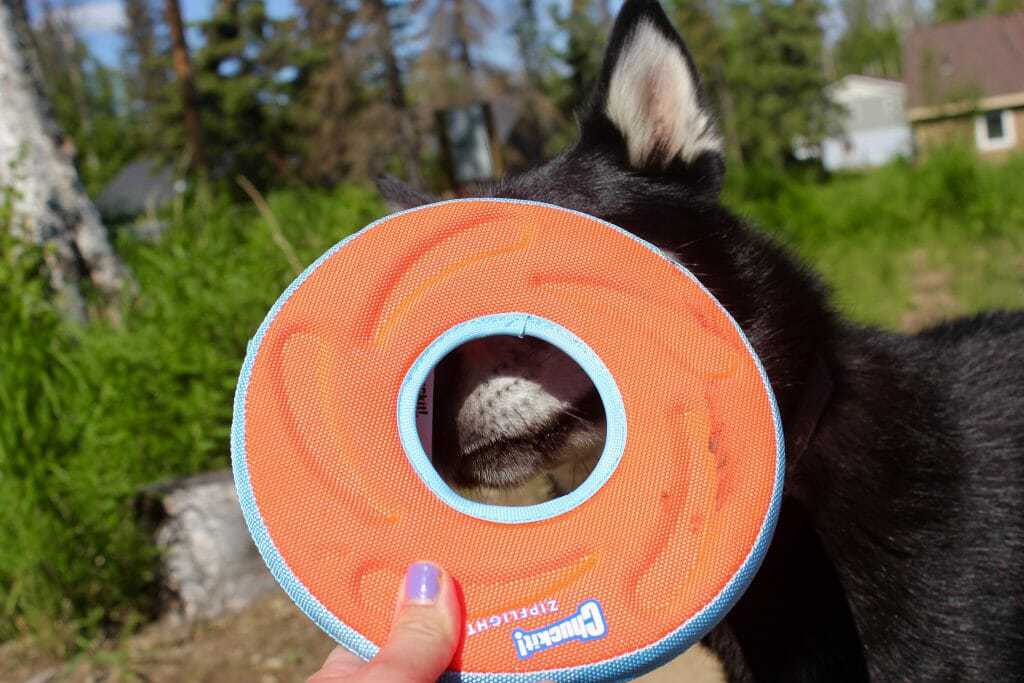 Eira tries to poke her nose through the Chuckit! Zipflight.

Because there’s a hole, there’s less of an unbroken slab of fabric for Eira’s teeth to hang onto. In addition, this disc toy has grooves and padding for extra sensational chewing pleasure. But don’t let your dog chew more than a couple times if you want the frisbee to last a while!

The first time I threw the Zipflight for Eira, she seemed confused. Where did it go? I imagined her thinking. But the second time, she ran right after it—and then lost it (or left it) in the tall Alaskan grass at the edge of our backyard. Thankfully for me, the Zipflight’s bright orange color was easy to spot among the green.

After a few more frisbee-like tosses, I tried rolling the Zipflight on the ground. Eira loved that even more than when I tossed the Zipflight into the air. 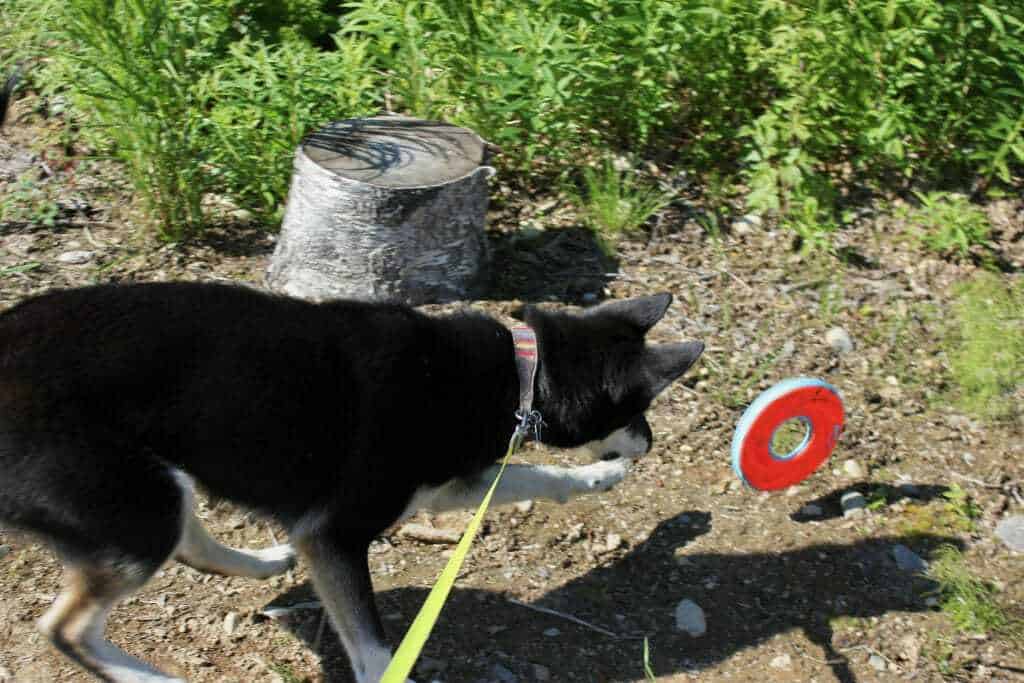 Buy your own Zipflight below. Your active dog will thank you! 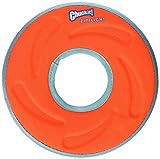 Find them both here: 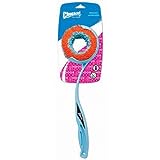 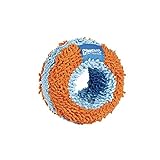 Eira doesn’t have these yet, but I will be ordering her these glow-in-the-dark Chuckit! Balls for our long, dark Alaska winters. Remember how I mentioned losing hundreds of Bella and Clancy’s tennis balls in the snowy field? These Lightplay Max Glow Balls would have solved that problem—at least if we lost the balls mostly at night!

Chuckit! Fetch Balls for the Launcher

The Chuckit! Ball Launcher comes with a Chuckit! tennis ball, but you can also use these durable rubber balls in the launcher. I prefer them because of their durability. Bella used to destroy tennis balls in five minutes flat if she got the chance. 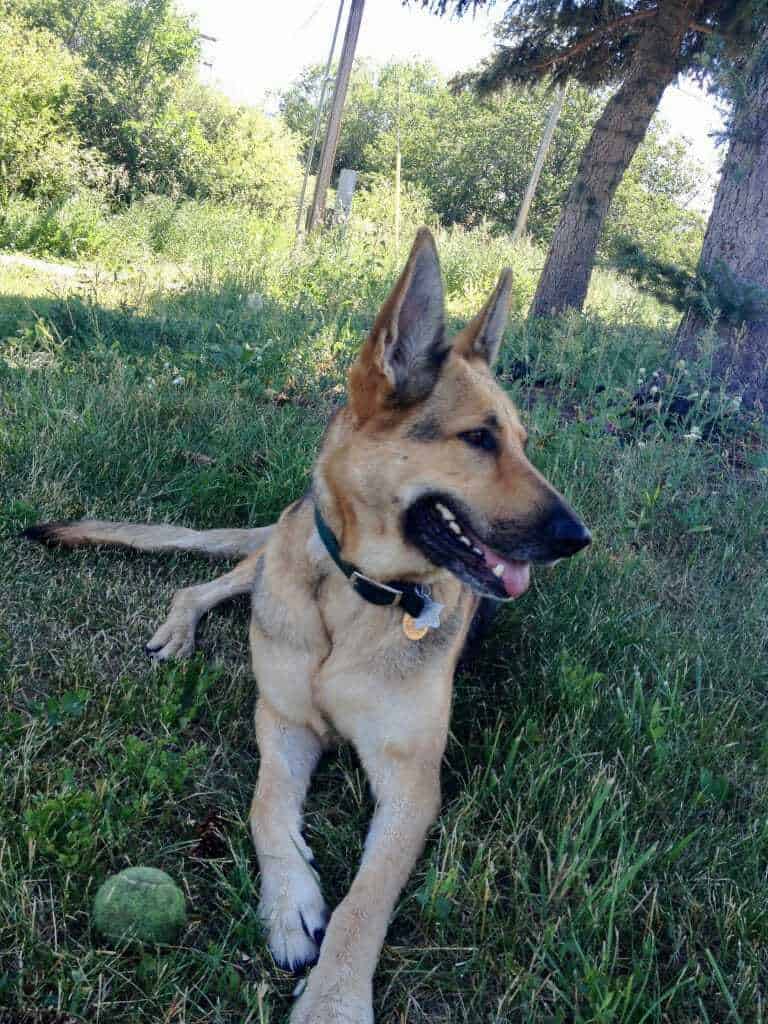 Bella and an as-yet-undestroyed tennis ball. I’m sure it didn’t last another day. She could’ve benefited from a rubber Chuckit! Fetch Ball! 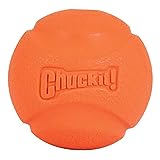 This ball is a treat for your active dog, especially for indoor play when it’s rainy or cold out. It bounces all over the place, true to its name, sending dogs chasing after it. Half the time they end up batting it into some obscure place—like under the couch—and then they get to work their brains to try to figure out how to get the ball back.

You can even fit the Erratic Ball in the Launcher, but it only fits at a certain angle. It’s probably easier just to toss it by hand. 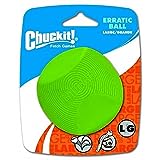 I wish I’d known about this toy when Bella was alive, because she adored water. She would’ve loved this toy. 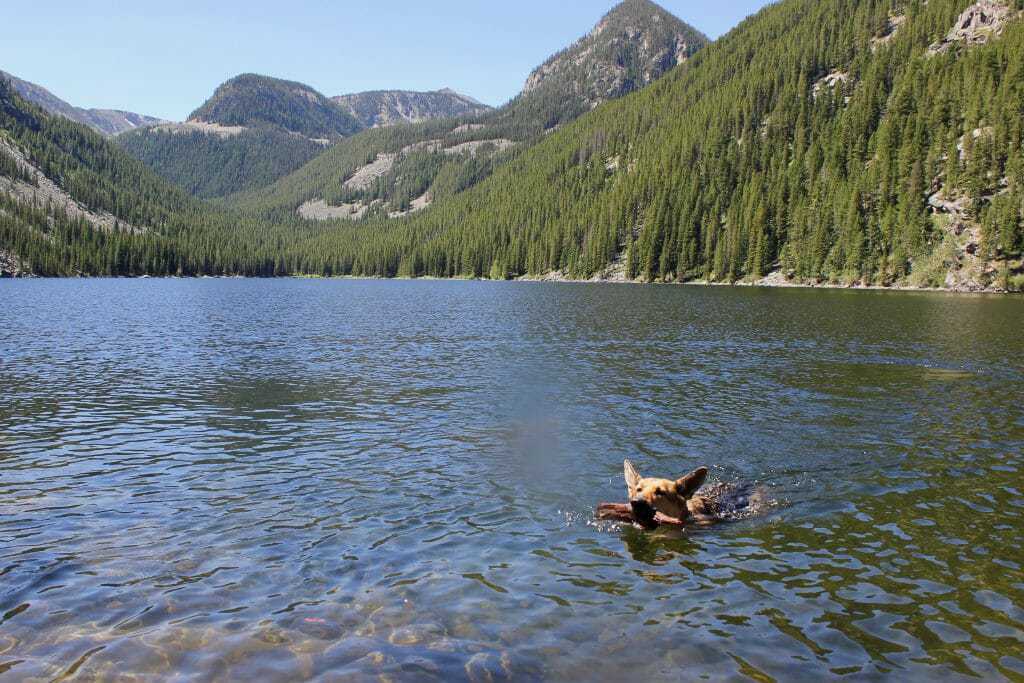 Bella loved swimming to fetch sticks we threw in the water, but sometimes they sunk before she could catch them. A Chuckit! Zipflight would’ve been a perfect solution for her. 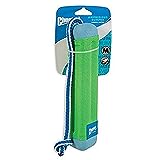 Which Chuckit! toys does your dog like best, and why? 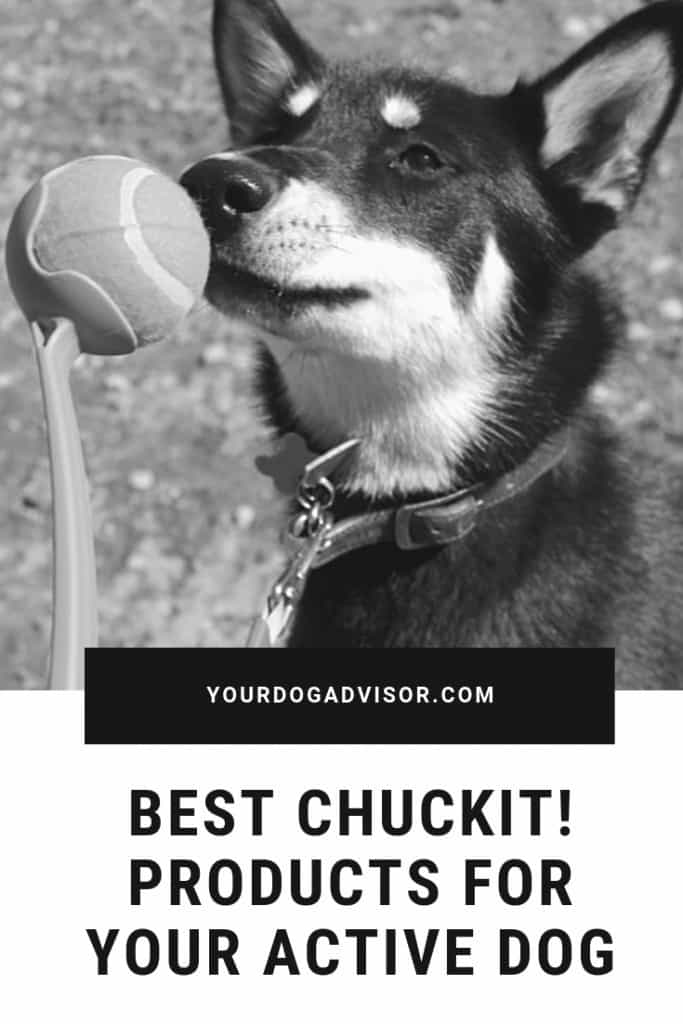