I think it goes with little argument that the universal toy for dogs is a ball. Whether your dog prefers the fuzziness of a tennis ball or the rubber tenacity of a Chuckit! ball, dogs just can’t resist the temptation of chasing, chewing, and fetching those little round rascals. Brands that specialize in dog-related merchandise have been stepping up their game in the last several years to bring ball throwing and fetching to the next level.

One of the most exciting advancements in the fetching game is the Ball Launcher. Ball launchers are designed to hold one or more balls at a time and launch them into the air. The intent is for your dog to retrieve the ball and, with a little guidance, learn to drop the ball back into the ball launcher. The process then continues and all you have to do is watch and enjoy. It’s a great invention that allows your dog to feel both physically and intellectually stimulated and gives the pet owner an opportunity to exercise their dog without leaving their daily responsibilities. You can still keep cooking or catching up on the daily news while your dog is busy playing with its most advanced toy.

This article will provide an overview of some of our most highly recommended dog ball launchers and includes tips on how to teach your dog to use the ball launcher without assistance. Before we jump into the ball launcher arena, let’s discuss what it is about the notorious ball that makes dogs go crazy.

Historically, before dogs became certified house pets, dogs were hunters. Dogs survived by chasing and catching small prey. Eventually, humans took advantage of this natural instinct in dogs and trained them to catch and retrieve food for their owners. The need to chase and capture is ingrained into a dog’s psyche, even though dogs are generally not out hunting for small prey anymore. It’s normally frowned upon when your dog tries chasing and catching the neighborhood cat.

Balls also check off all of the necessities that dogs love. When thrown, balls are fast, and they are easy to chase over and over again. The brand, Chuckit!, makes a number of a great ball toys that are pretty indestructible. For a detailed look at different toys, you can look at our article about the best Chuckit products on the market.

The right ball fits easily in a dog’s mouth and they can carry it around with them wherever they go. My dogs will carry their balls to bed and sleep with them, as if protecting a precious treasure, or a dead rabbit — whichever paints the better picture for you. Furthermore, just like us, dogs love accomplishing goals. Capturing a ball thrown by their own and then returning it is like checking something off their to-do list. It makes them feel good! 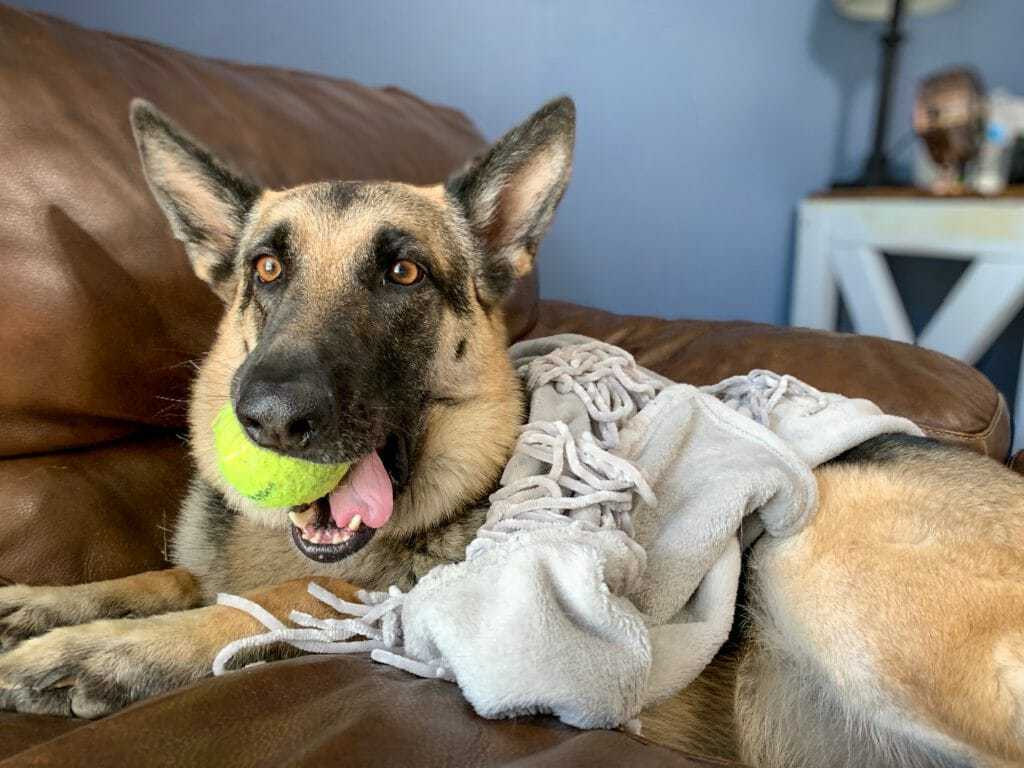 Dogs know that a ball isn’t a squirrel, but the feeling of chasing and retrieving satisfies that internal need that dogs have had since their early beginnings.

How to Train Your Dog to Use a Ball Launcher

First things first, you should your to become acclimated to their new ball throwing friend. Ball launchers can be intimidating to easily frightened pups because of their sounds and the fact that it’s a strange new object in the house. Without turning on the machine, let your dog sniff and get comfortable in its presence. Give your dog treats or praise when they approach the toy. You may even want to practice putting a ball inside and letting your dog stick its nose down in the launch pocket to retrieve it. This will go ahead and help your dog understand that the ball can be dropped there once you turn the launcher on.

Once your dog seems comfortable around the launcher with it turned off, put the launcher at a distance from your pup and turn it on. If you’re using a launcher with a sensor, like the PetSafe Automatic Launcher, the launcher will normally beep to inform both the owner and the pet that its running. Many launchers will also make a noise to indicate that it is ready to throw a ball. Help your dog to understand what these sounds mean by praising them and offer treats. For instance, if your launcher makes a noise to indicate that your dog is at an appropriate distance for the ball to be safely thrown, give your dog a treat and praise them. This will help reinforce that the noise is a sign of something right. 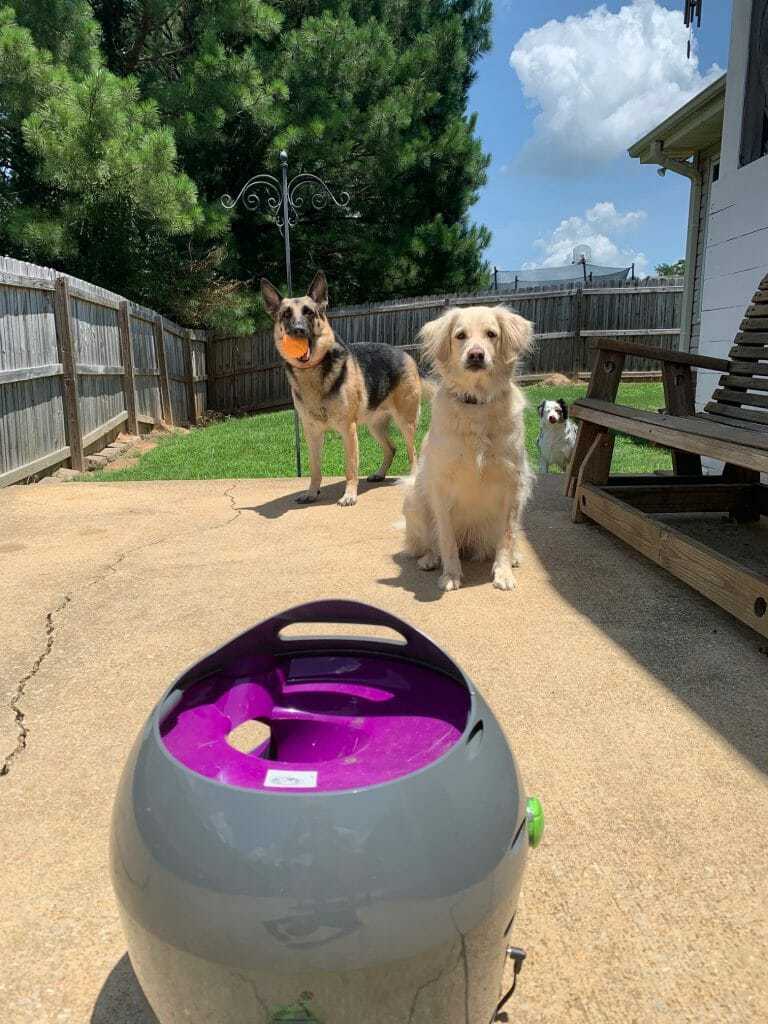 Now that your dog is starting to understand the noises and no longer be frightened of them, let your dog walk beside you to the launcher. Place a ball in the launcher. Normally you have a few seconds before the ball is thrown, so take this time to praise your dog. Once the ball is thrown, allow your dog to retrieve it and return it to you. Do this several times so that your dog understands that this new strange object in the house is a super awesome toy! Reward your dog each time it returns the ball to you.

Once the ball is thrown, allow your dog to retrieve it and return it to you.

If your ultimate goal is for your dog to learn how to play fetch with the machine, use a treat and hold your hand over the launch pocket. Use the command “drop it” or whatever command your dog is accustomed to. Let your dog drop the ball either into your hand or directly into the ball launcher. Reward your pup for a job well done and let the fetching continue. Do this several more times until your dog begins doing it with little guidance. Minimize the use of treats until the lesson is now a reinforced routine.

Let your dog drop the ball either into your hand or directly into the ball launcher.

You may need to adapt these steps to your dog’s personal skill set. Many of the manufacturers suggest you should supervise your dog when playing with a launcher and make sure that you’ve read all of the instructions prior to handling for the first time. Ball launchers are a fun and innovative addition to your dog’s play routine. They help make playtime and exercise a less tiresome task for you, and make it exciting and different for your dog. You may end up being a little jealous of how much your dog loves the new ball launcher over your own throwing skills!

Ball launchers are an awesome addition to your toy arsenal and make spending time and exercising your dog a breeze. Finding the right dog launcher for your dog requires scouring the internet for reviews, comparing prices, and evaluating what will fit not only your budget but also your dog’s preferences. Ball launchers come in a variety of options with different perks and functions. To save you a little time on your ball launcher search, this article will review 5 ball launchers based on cost and functionality. This list will give you a starting point for your search.

The PetSafe Automatic Ball Launcher can hold up to three standard sized balls and will launch a ball between 8ft to 30 ft. The launcher also allows for angle settings, so you can set it to throw lower or higher depending on your dog’s skill level and whether you are using it indoors or outdoors. The launcher comes with an automatic timer to allow for 15 minutes of play and 15 minutes of rest to make sure your pup doesn’t over do it. The PetSafe Automatic Ball Launcher built in safety features make it a great training tool and interactive toy. Price wise, it falls within the average price for automatic ball launchers. 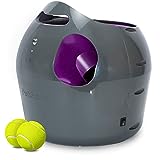 The iFetch Interactive Ball Launcher comes in two sizes: small or large. The difference between the small and the large is the size ball that will fit the launcher and the price tag. The small holds a 1.6 inch ball, perfect for small dogs, and the large launcher uses standard size tennis balls.

The iFetch Too does not have a sensor to detect your dog’s distance from the machine, but instead has the ball pocket tilted and located on the backside of the launcher. This will encourage your dog to stay behind the launcher. The exit portal for the ball once it is launched is at the front of the machine, so your dog will see it thrown and take chase. The ball is launched automatically and without a timer to ensure that your dog doesn’t have time to run back around to the front of the machine and get hit in the snout. The makers still encourage training your dog to stay behind the launcher, just in case your dog decides to get smart and race around to the front. 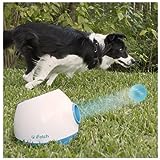 The All for Paws Interactive Automatic Ball Launcher fits a standard size tennis ball and has a throwing range of 10ft, 25ft, and 40ft. The ball pocket is located at the top of the machine making it easy for your dog to independently locate the entry pocket. The launcher has a simplistic design that makes training less complicated. One of the common customer complaints is the noise level. Dogs that are skittish around loud objects may be distracted or frightened by the sounds that the launcher makes while cycling the ball through. Compared to other similarly priced ball launchers, this ball launcher has less safety features and other extras, but if you’re looking for a launcher that will do exactly what it’s designed to do, then this is a launcher to consider. 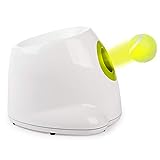 For the most part, ball launchers are generally designed to hold a standard size tennis ball. That’s great for medium to large sized dogs, but what about the small pups? If your dog is on the little side, this ball launcher may be the one for you. The IDOGMATE Mini Ball Launcher  is designed specifically for puppies and small dogs and holds a 1.75in size ball, perfect for those small mouths and teeth. The launcher throws between 10 – 35ft and includes a variable setting, if your dog wants a little surprise instead of a constant throwing routine. This launcher also features a remote control setting so changes to distance or power can be done in an instant. 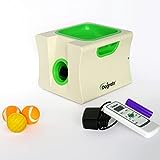 The IDOGMATE Automatic Ball Launcher also comes in what their band calls a “Midi” size, more commonly referred to as the standard ball launcher size for medium to large dogs. This launcher used a standard size tennis ball and includes the same features as the Mini model. This launcher can throw a distance between 10 – 50ft and also uses a remote control for ease when setting adjustments. Both models include a warranty and automatically turn off to save power. In comparison to other launchers with similar features, both models are reasonably priced. 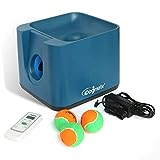 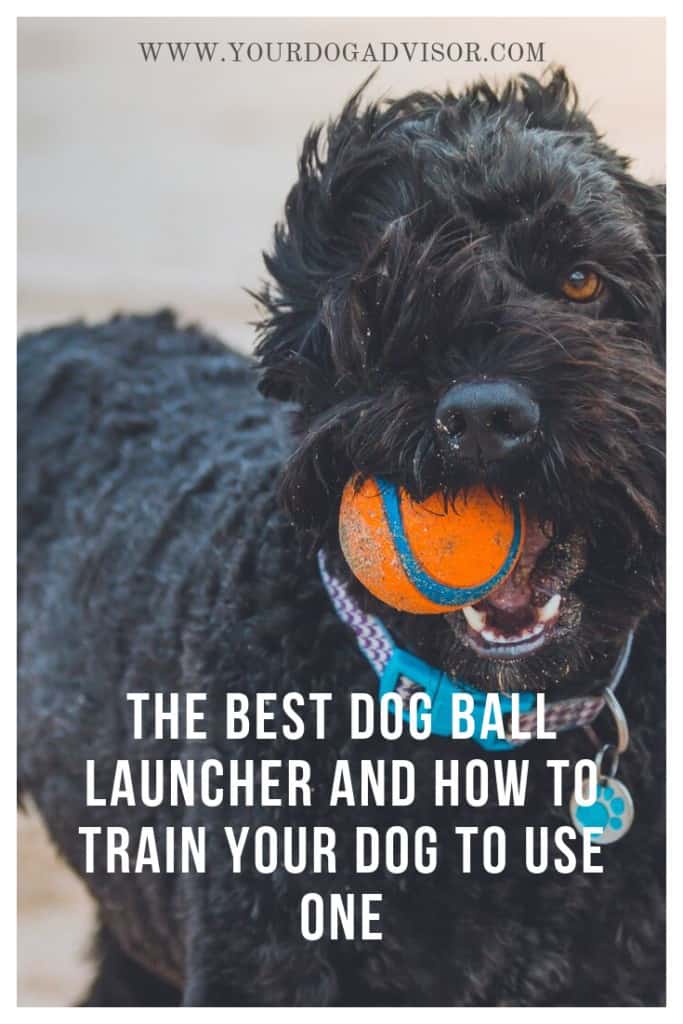