Have you ever been minding your own business when suddenly you feel your dog pawing at you? You could be sitting on the couch watching TV or talking and playing games, and suddenly there’s a paw on your leg. Maybe they leave it there, or maybe they start digging at you with it, demanding you pay attention. So why do they put their paws on us?

There are multiple reasons your companion may be touching you to get your attention, from just wanting you to pet them to needing comfort or even worrying about you.

They Want Your Attention

Dogs can be demanding when they want to be. They live for pets and cuddles, and some of them don’t take no for an answer. I’ve had multiple dogs who will demand I pet them by putting their paw on me and clawing at me, followed by scratching at me if I don’t obey. 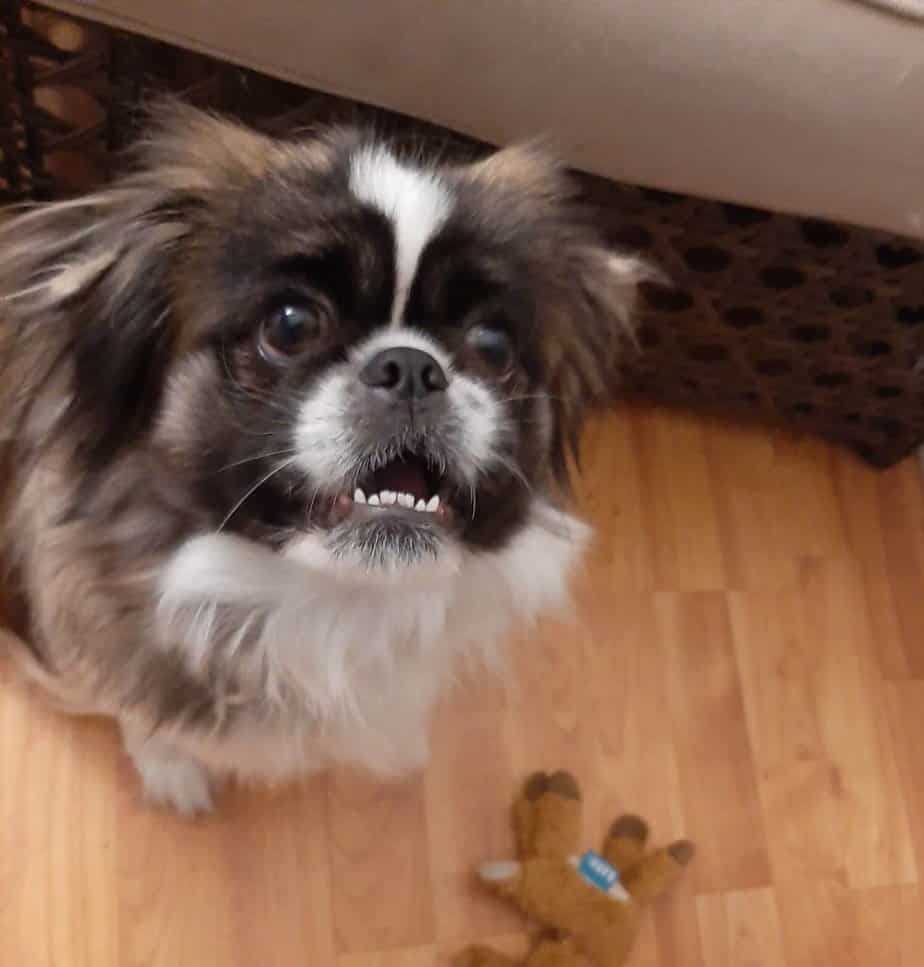 Dogs put their paws on people to communicate, usually to say that they want attention.

If your pup claws at you, they may just want attention. They may be especially needy if they haven’t received attention or playtime in a while. It may be time to stop what you’re doing for a bit and play some games with them.

They may wag their tail or stare at you with a pitiful look depending on the dog’s personality. If you pet them and they seem satisfied and happy, then they were probably just saying that they want you to pet them right now.

Your pup may also claw at you if you were petting them and stopped. They’re saying that they didn’t want you to stop and want more attention. I’ve had a dog who would grab me for attention and then get upset and dig at me again if I stopped.

If your companion is clawing at you while looking at the door or trying to lead you to the door, they probably need to go out for a walk and use the bathroom. It’s possible you got distracted and missed their walk time, or they may just really need to go. Either way, they’re just communicating their needs to you.

They may also be trying to get your attention because they want to play. They like to play with their people, and some of them can be demanding about it. If they’re clawing at you while also maybe trying to direct you towards a toy or trying to play bite you, they may be telling you that it’s playtime. 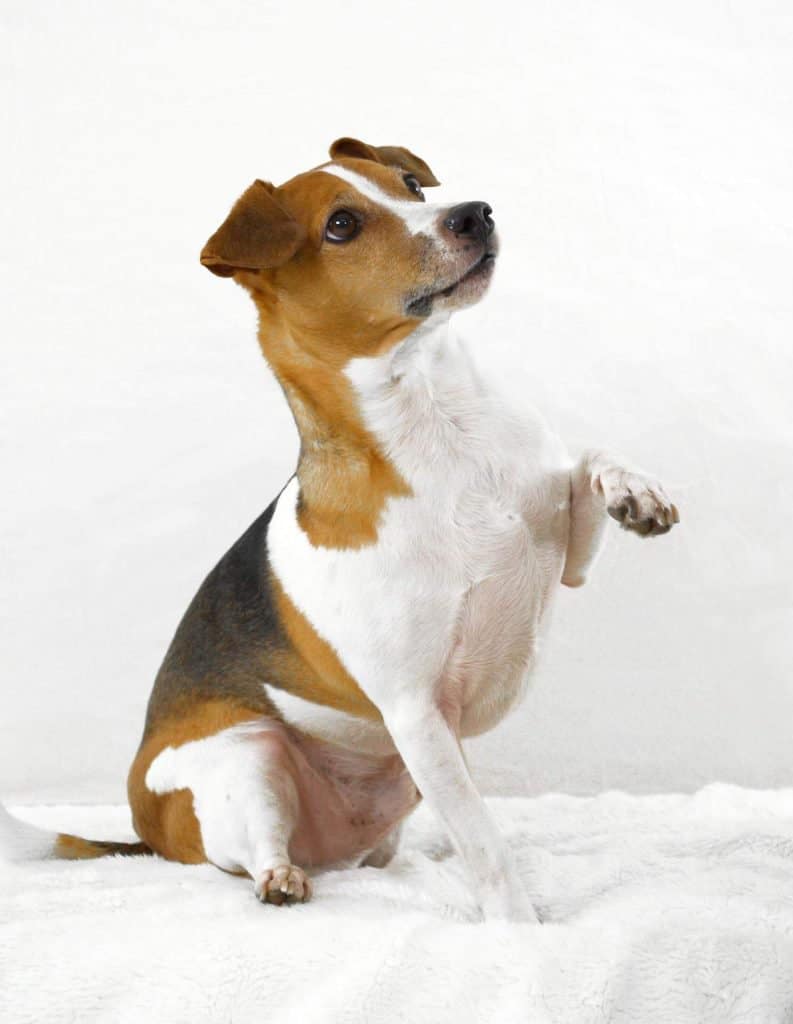 Your companion may be pawing at you for attention, to play, or to tell you they need to go to the bathroom.

It’s Time to Feed Them

Dogs live by a schedule, and they have a general idea of when they’re supposed to eat. And if you miss that time, some of them will let you know.

If you lose track of time and miss feeding time, your hungry puppy may come to you and start clawing at you to let you know that it’s time for you to feed them their meal.

If your pup is grabbing at you because it’s time to feed them, don’t get mad at them for interrupting you and just feed them. They can’t feed themselves, and you don’t want them going hungry because you got distracted.

That said, only feed them if it’s actually time to feed them. The last thing you want is for them to come and grab you whenever they want food.

If your pup paws at you, it’s possible that something’s making them scared or anxious. Take a look at them and see if they’re showing any other signs of anxiety. If their ears are flat or they’re panting, they may be coming to you out of anxiety. Also take note if there’s a storm or fireworks celebration in the area, as both of those can lead to an anxious pup.

I had a dog who would always come up to me and claw at me with a scared face whenever fireworks were going off. She’d even make me hold her paw or try to climb in my lap despite her size. Touching me comforted her when the terrifying explosions wouldn’t stop.

If you think your pup is touching you out of fear or anxiety, don’t just push them away and ignore it. Try to find out what’s making them anxious and help them as much as possible. 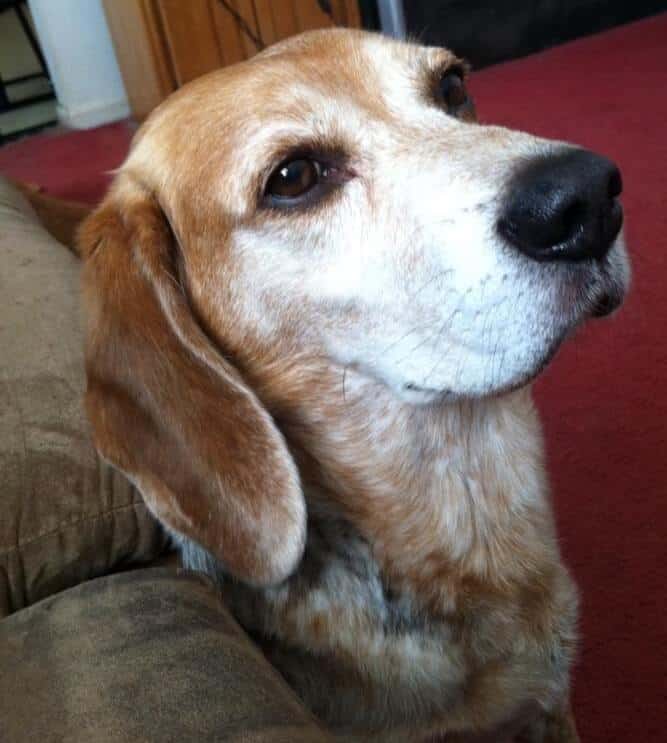 A dog may put their paw on you if they’re scared or anxious about something.

If your furry friend is clawing at you and looks distressed, look for any signs that they’re sick or hurt. It could be something obvious like an injury, or they could have an upset stomach or another health problem.

If you can’t find an obvious reason for their discomfort, keep observing their actions throughout the day and call a vet if you think it’s serious.

Your furry friend can sense your sadness and emotions. They can also tell when you’re not feeling well. And when they know you’re sad, upset, or sick, they want to help you. They may not be able to cure you, but they can offer their comfort and support.

I’ve had plenty of experiences where my dog would grab at me and give me a sad face when I was upset or sick. They didn’t want attention or food, they just wanted to let me know that they cared. It’s a sweet gesture and it really can lift your mood knowing that they’re there for you. 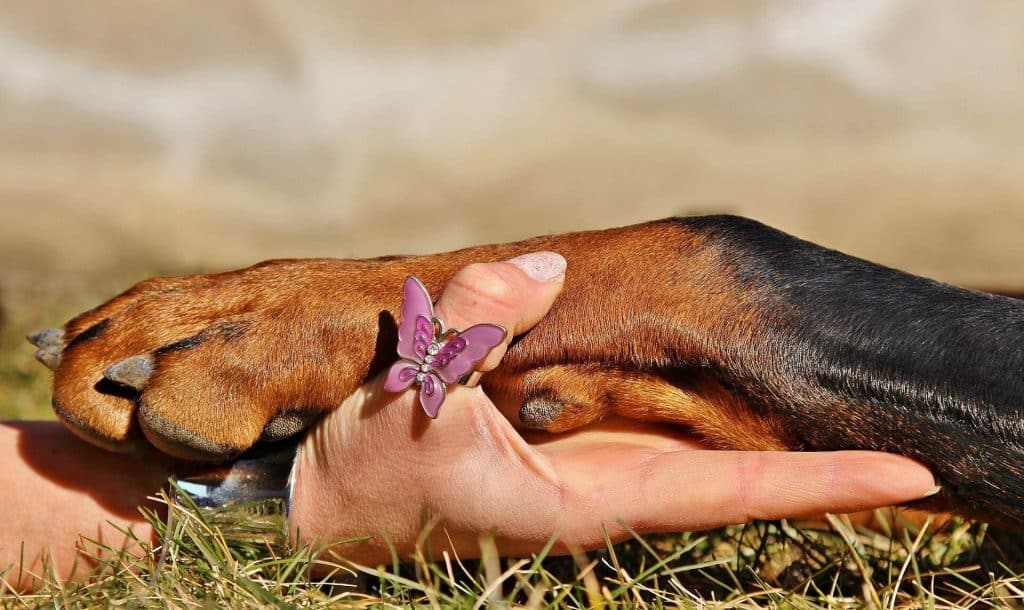 Your companion may paw at you to comfort you when you’re upset or sick.

I’ve also had dogs come grab me to get my attention when I was stressed over something and needed to take a break.

If your companion comes up to you while you’re upset and puts their paw on you, it’s probably not to demand attention or food. They’re just trying to help you in the only way they can.

According to a study, both parties benefit from a human petting their dog. So your companion trying to redirect your attention to them may be a way of comforting you.

Sometimes your pup is just putting their paw on you to communicate that they love you. Just like how they sometimes lay on your feet to show affection, they also sometimes claw at you to show their love.

Dogs love us, but they can’t tell us outright, so they use other means to communicate. Putting their paw on you may just be one way of doing it. They feel a rush of feel-good hormones from getting pets, so they may just be trying to return the favor by petting their human back. 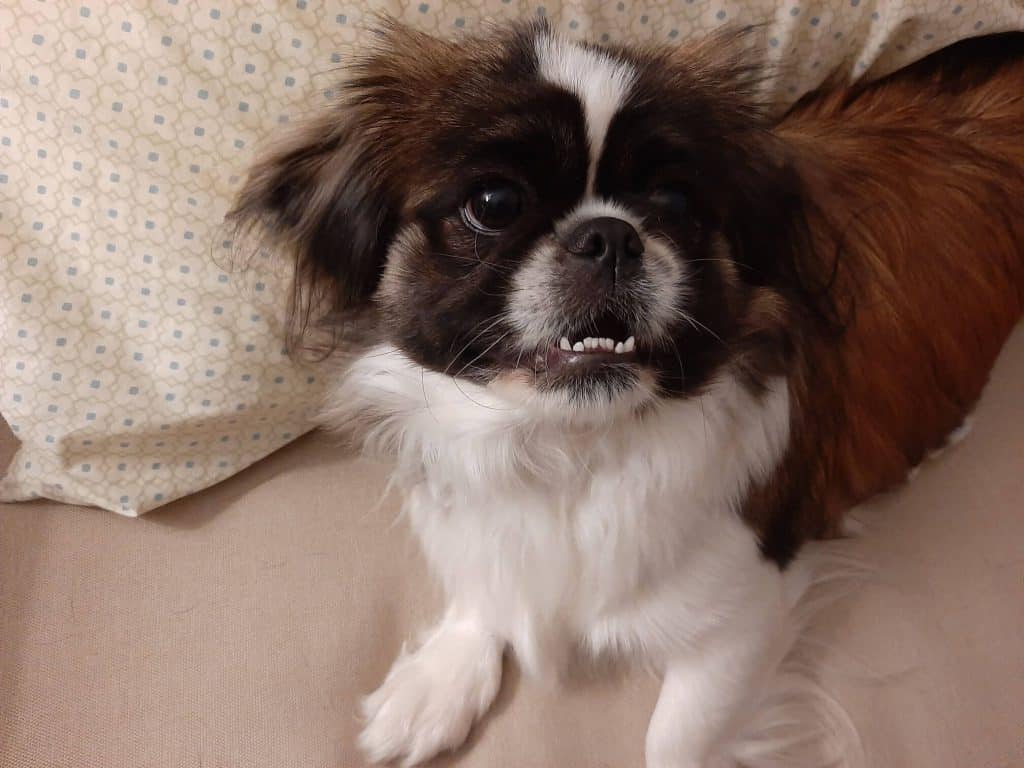 Dogs may paw at you to show their affection.

Stopping Your Dog From Pawing

This is mostly cute and harmless behavior, but if you don’t want your dog clawing at you for any reason, don’t give in and pet them or feed them. Complying with their demands will send them the message that the behavior works.

Make sure you keep your pup on a consistent bathroom and feeding schedule. Also, make sure they’re getting plenty of attention and playtime. If their needs are already being met, they’re less likely to come to you to demand more.

If you think anxiety or pain is the cause, your pup is just trying to communicate a problem to you. It’s best to find out what’s causing the anxiety or pain and do something about it. Make sure to consult a vet if you think that they’re sick or hurt.

Getting upset and punishing your companion is not the answer and likely won’t get you the results you want.

Dogs Can Communicate With Their Paws

If your companion is clawing at you while also trying to direct you to pet them somewhere or direct you to play with them, they likely just want attention or want to play.

If they look distressed in any way when they claw at you, look for signs of anxiety or pain to make sure they aren’t trying to tell you something more serious. If you think that they are trying to tell you they’re sick, take them to the vet. 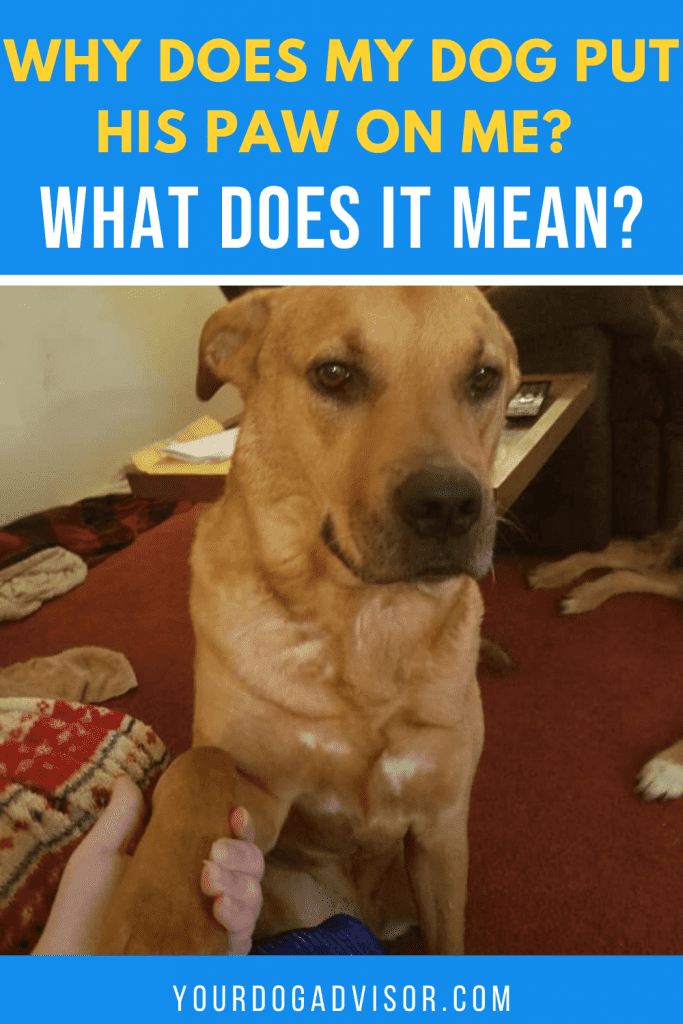 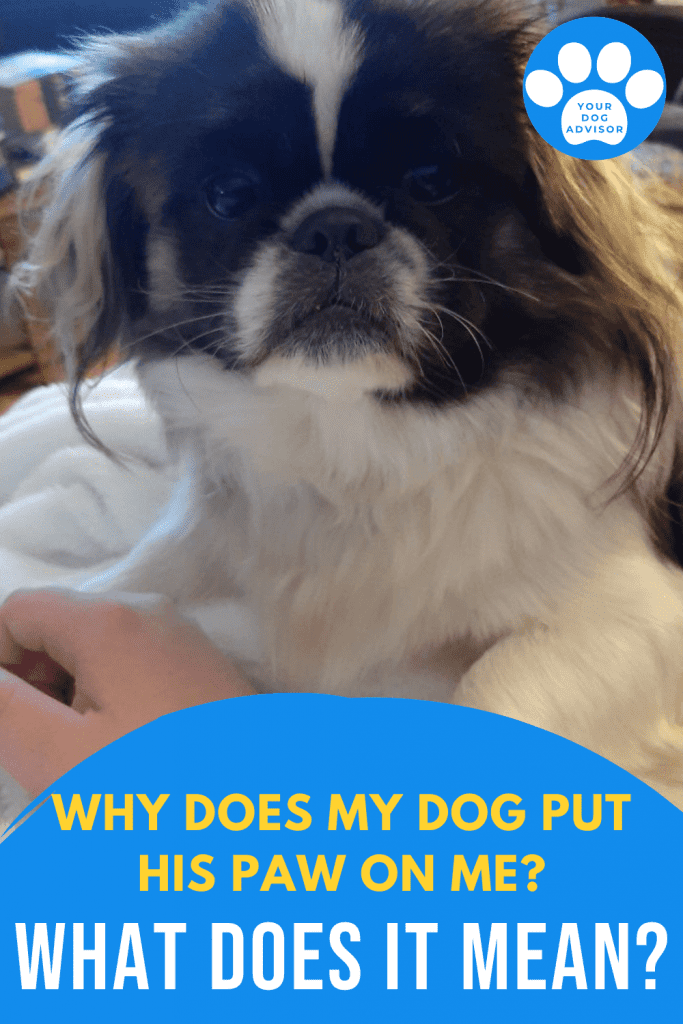