If you’ve lived with a dog for a while, you’ve probably noticed that many of them tend to plop down next to or on your feet. Most dogs I’ve lived with have done it, usually with their favorite person. Some will just plop down on top of you, making it difficult to move. Others are content just to be right next to your feet. Either way, you might be wondering why dogs lay on your feet. What does it mean?

Dogs can lay on your feet for several different reasons, but it all comes down to their pack instincts and their love for you. The instinct to lay on or near you comes from a deeply ingrained sense of loyalty and respect that your pup has for their pack leader. While some may worry about it being a sign of possessiveness, it’s usually a harmless, lovable gesture.

It can be hard to believe sometimes for certain breeds, but dogs are all descended from wolves. Wolves are social creatures known for being pack animals. They tend to stay in packs with a leader or two whom the others respect. When the leader lays down, the rest of the pack will often lay around the leader for safety and warmth. 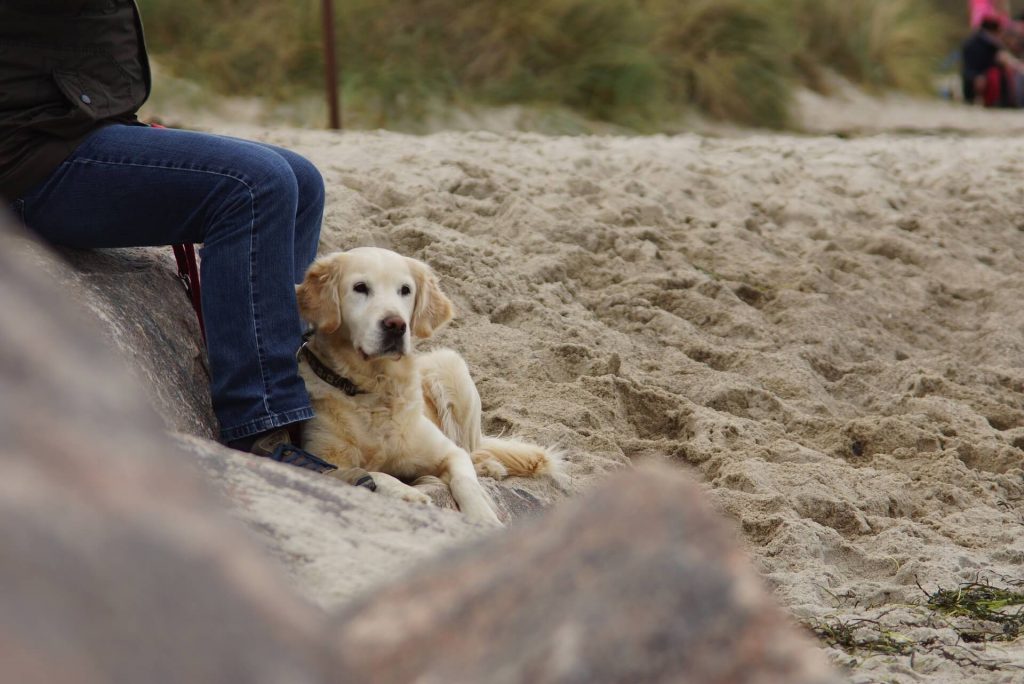 Dogs have inherited pack instincts from wolves, including the instinct to be close to you, the pack leader.

Dogs have continued to inherit those traits, regardless of what breed they are now. You may not think about it much, but your pup sees your entire family as a pack. And that makes you the pack leader. Even if you’re not their favorite human or the obvious person in charge, you may still be seen as one of the leaders.

This is why when training, your furry friend will learn to respect you as the boss and do anything to please you. They see you as their leader. And because of that, they feel safe with you.

They Want to Show Respect

Again, your pup sees you as the pack leader. You are their safety and warmth. So they may just lay at your feet because they respect you. Laying at the feet of their human may be one way your companion shows respect and devotion to you, their leader.

Much like how wolves lay near their leader on instinct, so do dogs. They know who the boss is and who keeps them safe. If your pup is laying near or on you, you can take a bit of pride in knowing that they probably respect and recognize you as their leader. 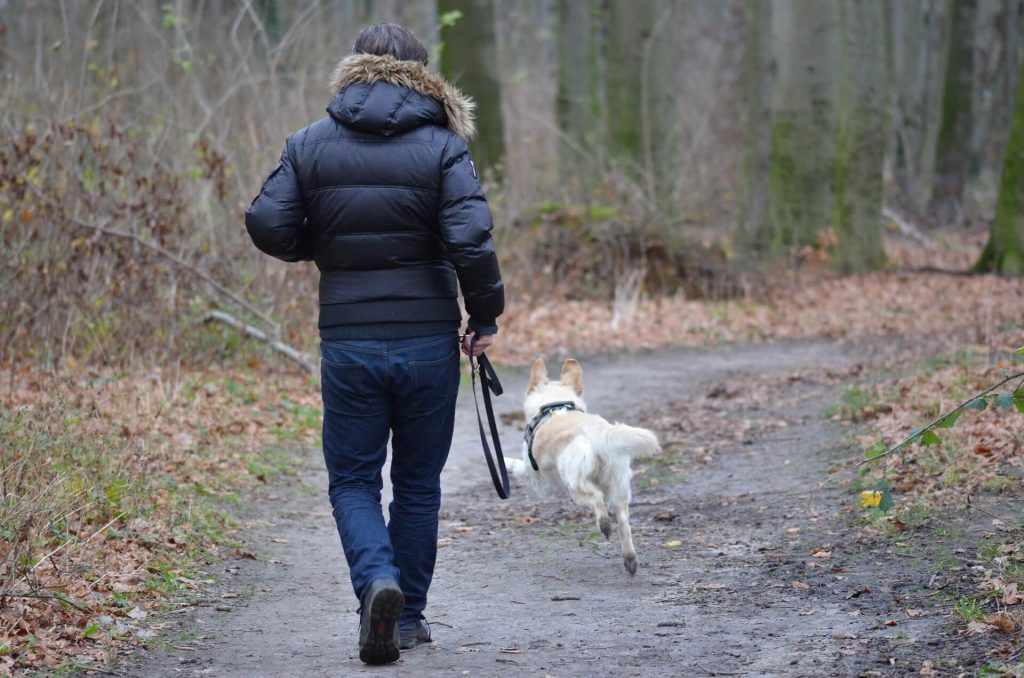 Dogs respect you as the pack leader and may lay on your feet as a sign of their respect.

They Want to Protect

For better or worse, dogs can be protective over the ones they love. Your furry companion wants to protect you and their other pack members, even if we think there’s nothing to protect us from. Sometimes being protective can be a problem, and you should always make sure your pup isn’t being overprotective of you. But in this case, it’s pretty harmless.

Laying near or on you can be your companion’s way of putting themselves in between you and anything harmful. This doesn’t mean there’s actually anything dangerous in the area to worry about, but that doesn’t stop your companion from wanting to protect you anyway.

If you’re not feeling well, your pup may also lay on or near you as a means of comforting and protecting you. They can sense when you’re sad or not feeling well. Any time I’ve been sick, I’ve had a dog right on top of my feet for the entire day. It can be their way of worrying about you and letting you know that they care.

Because they see you as the pack leader, your furry friend trusts you to keep them safe. If anything is going on that could be making them nervous, they may lay near or on you. They feel safer being as close to you as possible.

I had a dog who would lay at my feet as close as possible anytime there was something disturbing like fireworks going on. She was trusting me to keep her safe from the evil fireworks. In some cases, she was also panting and showing other signs of anxiety. 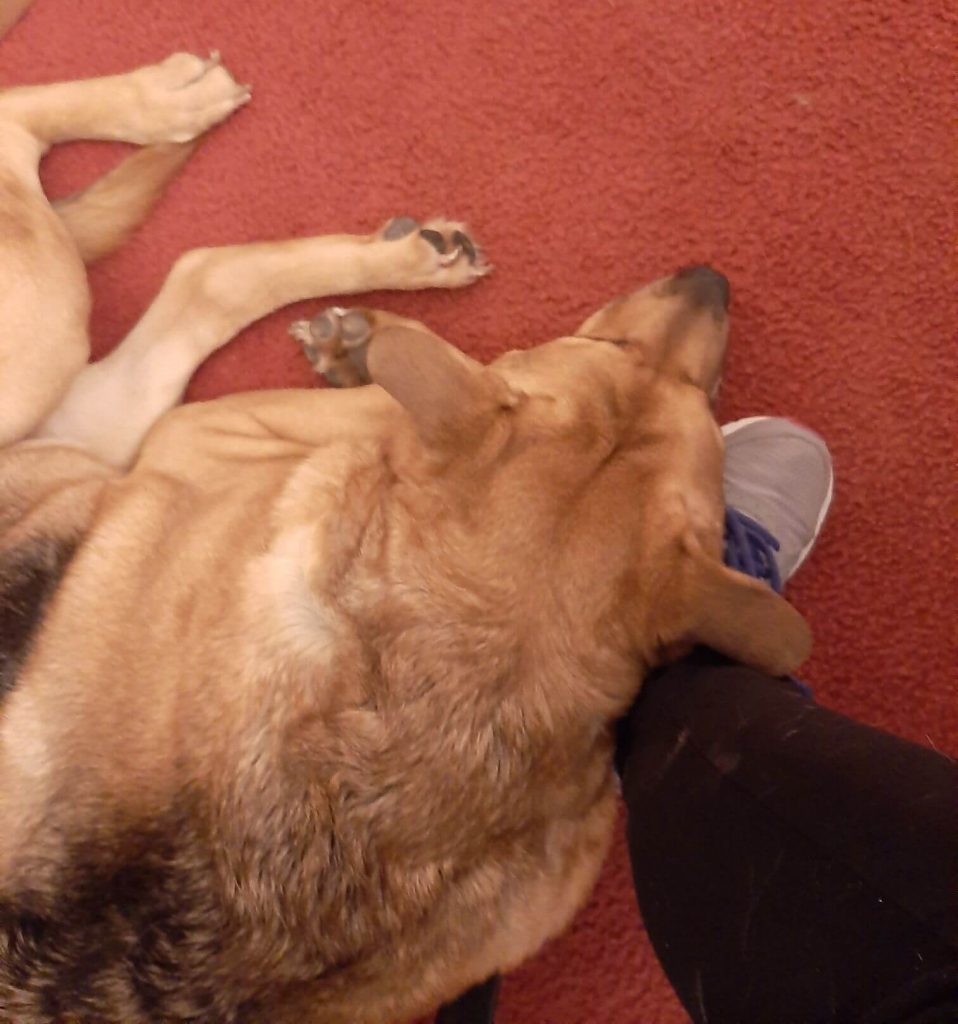 Dogs may lay on your feet to seek comfort because they’re worried or scared. They trust you to keep them safe.

If your companion is at your feet while also displaying signs of anxiety like pulled-back ears, panting, or a tucked-in tail, they may be close to you because they’re scared and need you to comfort them. If you notice this, try to calm them and look into what’s causing the anxiety.

Your furry friend may also feel safer falling asleep near or on you. They know you’re going to protect them, so being close to you and resting on top of you reassures them and lets them fall asleep. This may be why your pup wants to sleep on your feet in the bed or while you’re on the sofa. They could also be there for warmth.

Most dogs I’ve lived with have slept in the bed with me at least once. Almost every single one of them usually wanted to lay on my feet. And it usually didn’t take long after laying there for them to fall into a peaceful sleep.

They Just Love You

Sometimes a dog is on your feet simply because they love you. It can be their way of showing affection. Just like we like to be physically close to people we love, so do they. If your pup is laying on you, it may just be a form of affection and there may be no other meaning behind it.

As I’ve said, just about every dog I’ve ever owned has layn on my feet at least once, even if I wasn’t their favorite. Sometimes it was because they were worried, sometimes it was for comfort, but sometimes there was just no other reason than loving me and wanting to be close.

They may also want to be close in case you try to do something horrible like walk out of the room without them. They love to know where you are at all times and they love to follow you. Being right on top of you gives them an easy way to do that. 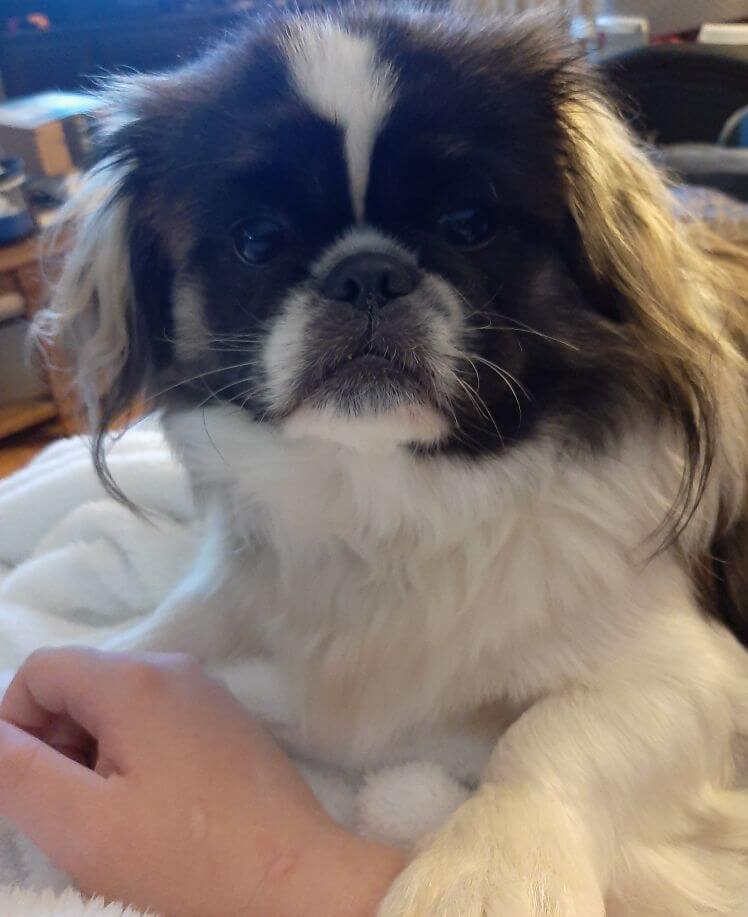 Dogs may lay on or near you just because they love you and want to be as close as possible.

While it’s not the most likely scenario, your pup may be laying on you as a form of possessiveness. They’re laying a claim to you and telling everyone else that you belong to them and only them. If they’re also showing other signs of aggression, possessiveness, or jealousy, it may be a problem.

If they’re also not letting anyone close to you in public or the house, you may need to look into some training to teach your dog not to be so possessive of you. You don’t want you or your furry friend getting into trouble down the road because they scared someone or bit someone for coming near you.

What If You Don’t Want Your Dog Laying on Your Feet?

Maybe you’re worried that your pup is laying a claim to you and will be possessive over you, or maybe you just don’t want your feet going numb every time they lay there. Either way, as cute as it is, not everyone wants their 70-pound German Shepherd on top of them.

If you don’t want your dog to lay on your feet, the important thing is not to encourage them when they do. If they lay on you, don’t pet them or give them positive attention. If you do, you’re telling them that you enjoy having them there, so they’ll keep doing it. That said, don’t get angry and kick them away either. Harshly punishing your pup is never the answer. 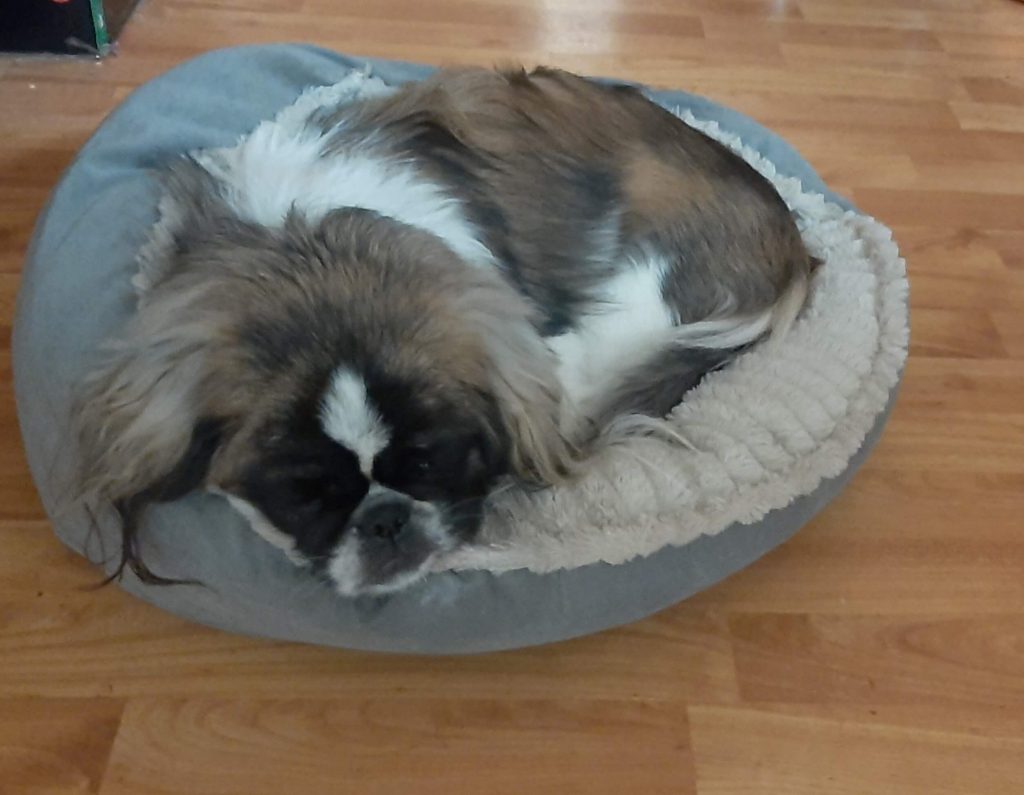 If you don’t want them on you, make sure your companion has plenty of safe places to lay and reward them for using them.

Make sure they have nice, fluffy beds and similar comfortable places to lay. Encourage them to use their beds by praising them when you see them in them, preferably giving them treats. If your pup gets more praise, attention, and treats for laying in their beds, they’re more likely to lay there instead.

Dogs Love to Lay on Your Feet

At the end of the day, dogs lay on your feet because they love and respect you. It means that they recognize you as the leader of their pack, and they feel that they can rely on you to keep them safe.

They may also lay on you because they want to protect you from the world, even if there’s nothing else they can do. Likewise, they may be looking for protection from you. They know that you provide a safe place for them if they’re scared or just want a safe place to sleep.

While it’s usually a positive sign, just make sure that your pup isn’t showing any other signs of possessiveness or aggressiveness towards others who come near. If you’re worried that your companion is getting possessive, look into training methods to put a stop to it.

If you don’t want your pup laying on your feet for some reason, make sure not to give them positive reinforcement by petting them or showering them with affection when they do. Instead, reward them for using their beds with praise and treats. That said, it’s usually just a sweet way of showing affection and bonding with you, so there’s no critical need to make your companion stop. They usually just want to be close to you and bond with you. 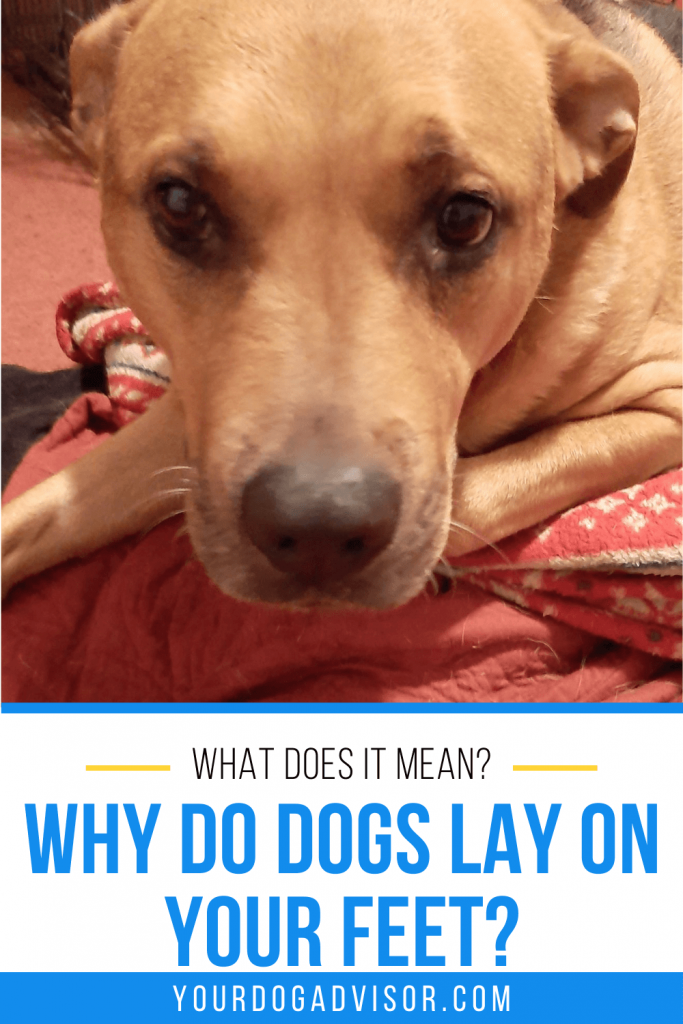 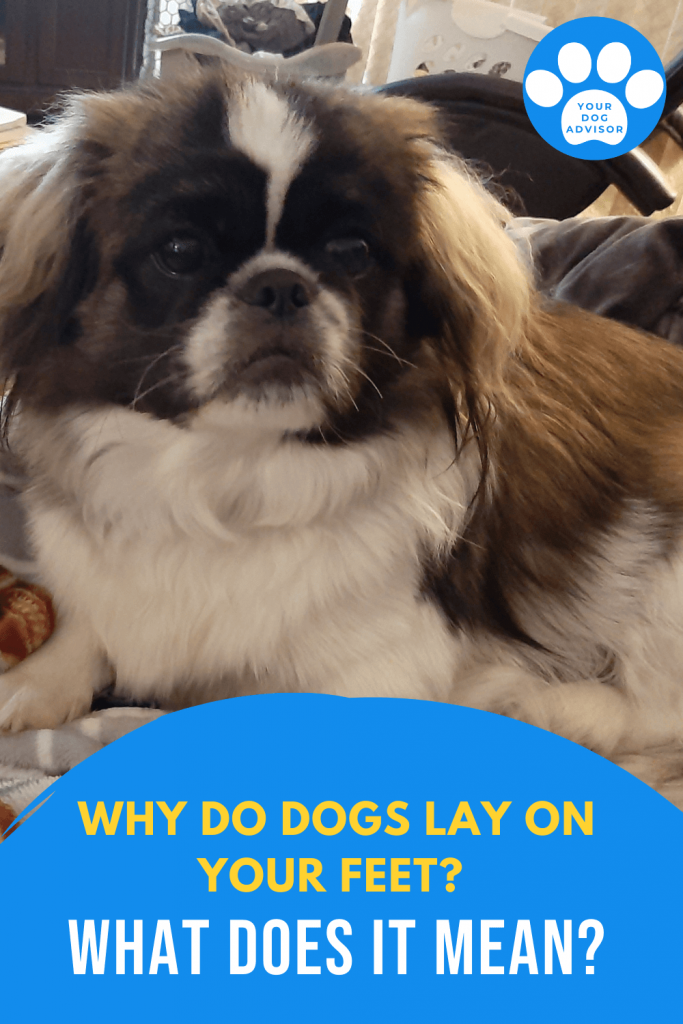