Depending on the breed of dog, you may encounter the use of terms such as F1 or F2. While you may initially feel this refers to some number for breeders, it does mean much more than that.

But before you start to stress, this apparent code is easier to understand than you may have expected. However, to make life easier when explaining, we can look at a specific breed of Doodle dog, the Goldendoodle.

By using an example, it will make it easier for you to follow what we mean as we delve into generational lineage. Ultimately, having some basic understanding of this may prove important when looking at purchasing a puppy or adult dog.

As you will discover later, it may change their appearance, health or even the price you need to pay. So, let’s get on with telling you everything you need to know about these F numbers. 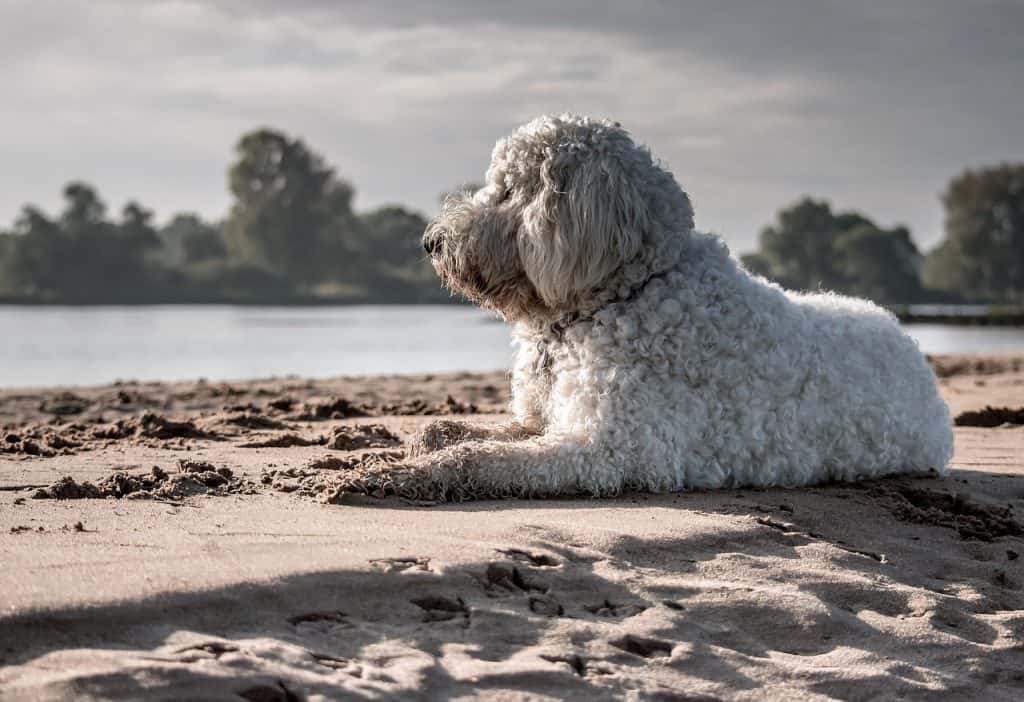 The Goldendoodle is not always as golden as you think.

Those F Numbers Refer to Generations

When looking at a mixed dog breed, you may encounter numbers such as F1 or F2. That’s because it focuses on the generational aspect when you have mixed two breeds together.

The actual F part stands for the word ‘filial,’ and it simply states that the dog is the direct offspring of parent breeds. However, the number part refers to different generations, and you also have options such as F1b to contend with.

So, this is what it all means if talking about the Goldendoodle. However, if you have any other mixed breed dog, then swap in the two parent breeds for your dog.

With that in mind, let’s delve deeper into the F numbers and see what each one means. It really is not as complicated as you may initially fear.

If you see a dog advertised as an F1, it refers to a first-generation mix. Using the Goldendoodle as an example means one parent is a Golden Retriever while the other is a Poodle.

At this point, an F1 Goldendoodle has a perfect mix of genes with 50% Golden Retriever and 50% Poodle. Basically, it’s a straight mix between the two parents, so it’s very easy to follow.

With an F1 dog, you have a pure crossbreed. It’s the perfect choice if you wish to get as close to the original roots of the dog as possible. If you want to own a crossbreed but still prefer one breed over the other, then an F1 is the perfect solution.

From a genes perspective, you still have a 50/50 split between the Golden Retriever and Poodle. This split happens because both parents of an F2 are identical. It means they have the same genetic split, which they pass down to the next generation.

However, an F2 generation can have different physical attributes, as we will describe later.

The F2 Goldendoodle starts to take on more of the coat of the Poodle on most occasions.

An F1b dog is where things begin to change. Here, you have a cross between an F1 Goldendoodle and a Poodle. This explains why the ‘b’ part stands for a back cross, as the F1 cross was ultimately bred with one of the original parent breeds.

Usually, at least in the case of Doodle dogs, this would mean the F1 dog is the male, and the Poodle is the female. However, some breeders will change things around and breed an F1 with a Golden Retriever, depending on the mix they wish to achieve.

If you followed an F1b dog’s description, you might have already guessed what an F2b dog stands for. Here, it refers to an F2 dog bred with one of the original parent breeds.

So, with our example, it would mean an F2 Goldendoodle bred with a Poodle resulting in an F2b.

In some instances, this back cross approach can go to another level with an F1bb generation dog. Here, it refers to an F1b dog bred with the original parent breed, such as a Poodle.

So, if you have an F1b Goldendoodle and breed it with a Poodle, then the result is an F1bb. 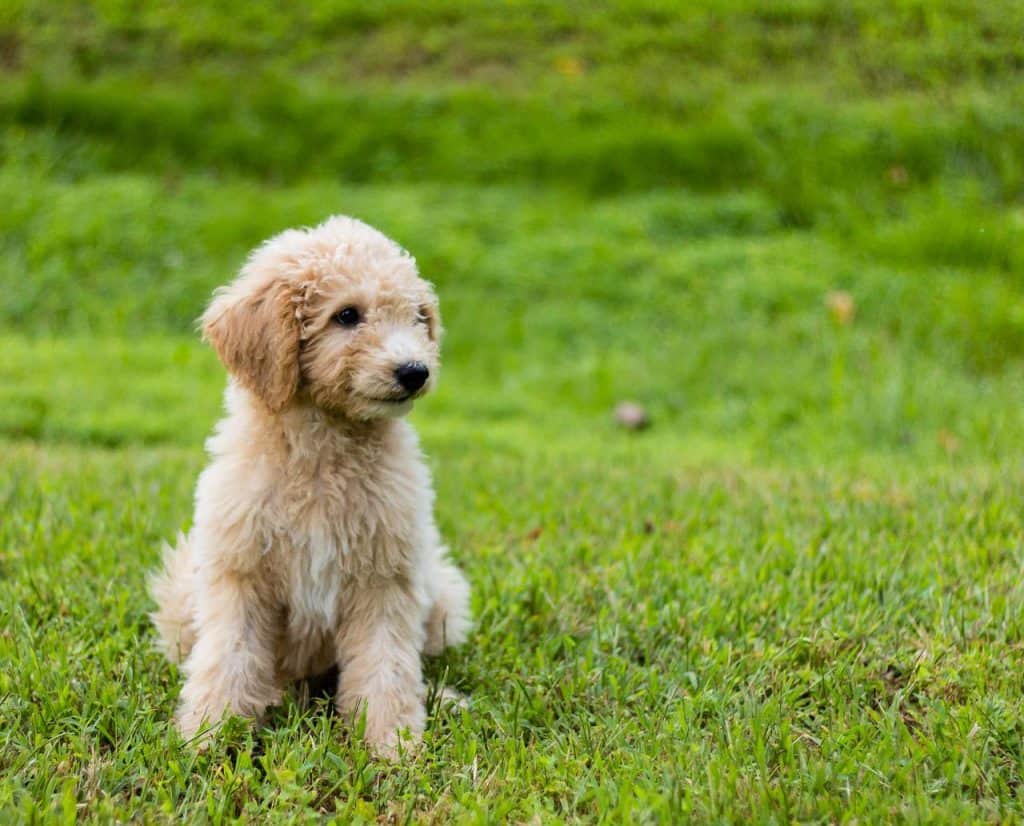 It can be difficult distinguishing between different aspects of the same breed.

The last generation worth talking about is the F3. From a breeding perspective, the dog is now three generations away from the original cross. You then see that an F3 dog results from an F2 dog bred with an F2 dog. Alternatively, it can also refer to an F1b crossed with another F1b.

However, don’t be surprised if some breeders never mention this F3 term. Instead, some will refer to any dog beyond F2 as simply ‘multigenerational’ even though this F3 term does work.

What Difference Does This All Make?

While this may all sound like a lot of letters and numbers, it does make a difference to the actual dog’s physical attributes. Once again, we can stick to the Goldendoodle to better explain what we mean.

It makes sense that, as you move away from the original parents, those things start to change. However, the genetic balance moves more in favor of one breed in some instances, and that is where you start getting some distinct characteristics shining through.

The main area where you will notice a difference between generations is the coat and the levels of shedding in some breeds. Again, let’s look at the different generations and how it changes everything.

If you take it back to the original F1, you have that 50/50 Golden Retriever and Poodle split. Thanks to the Golden Retriever aspect, you would still have a substantial amount of shedding. Yet it’s important to know that an F1 dog will still shed less than the purebred dog, thanks to only containing half of the genes.

However, the coat on an F1 Goldendoodle will tend to share both characteristics. It may mean some puppies have straighter hair while others have more wavy hair. Yet it will remain clear that the hair shows a mix between both parents. 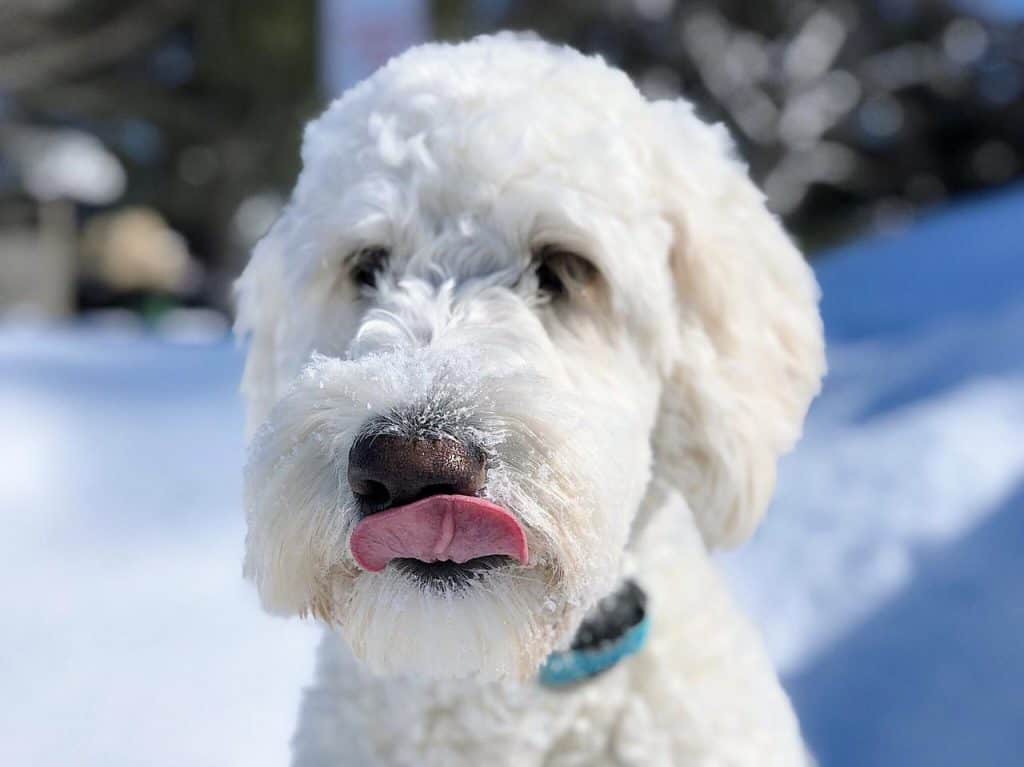 As the dog moves away from F1, the coat takes on more regular properties.

The F2 Goldendoodle is where you enter into some lottery regarding coat and shedding, and it’s all thanks to those genes. But don’t worry, it does mean you end up with an extremely cute and adorable dog.

Where with the F1 generation, you know the dog will have one copy of each set of genes from the parents, it does become more confusing with an F2 generation. Here, an F2 Goldendoodle may receive two copies of the genetic code for a Golden Retriever coat instead of one.

This mix could result in a Goldendoodle with 50/50 genes, but where there is a heavier reliance on the coat and shedding of just one parent. Don’t be surprised if you then have a dog with the bone structure of one breed yet almost the complete coat and shedding levels of the other.

The F1b Coat and F2b Coat

Everything changes yet again when you get to the F1b coat. Here, you have an F1 Goldendoodle, complete with that 50/50 genetic split, bred with a pure Poodle.

From a genetic perspective, this dog would have 75% Poodle genes and only 25% Golden Retriever. That drop of 25% stands for a whole lot when it comes to breeding.

Because this dog has substantially more genes from the Poodle, they will most likely have a wavy coat rather than a straight one. Also, shedding levels will drop as a result as well. In this instance, it would mean the F1b would be a good dog for any individual wishing to own a hypoallergenic dog.

This applies to an F2b coat where the main emphasis is on the Poodle coat yet again. However, if the breeder focused on paring an F1 with a Golden Retriever, then you would expect the coat to look more like the Golden Retriever.

It all comes down to the breeding line.

That makes a massive difference to how an F1bb dog will look. You will clearly see the Poodle in the dog more than the Golden Retriever for a Goldendoodle. This mix leads to a curly coat with very little in the way of shedding. From an allergy perspective, this dog would work exceptionally well. 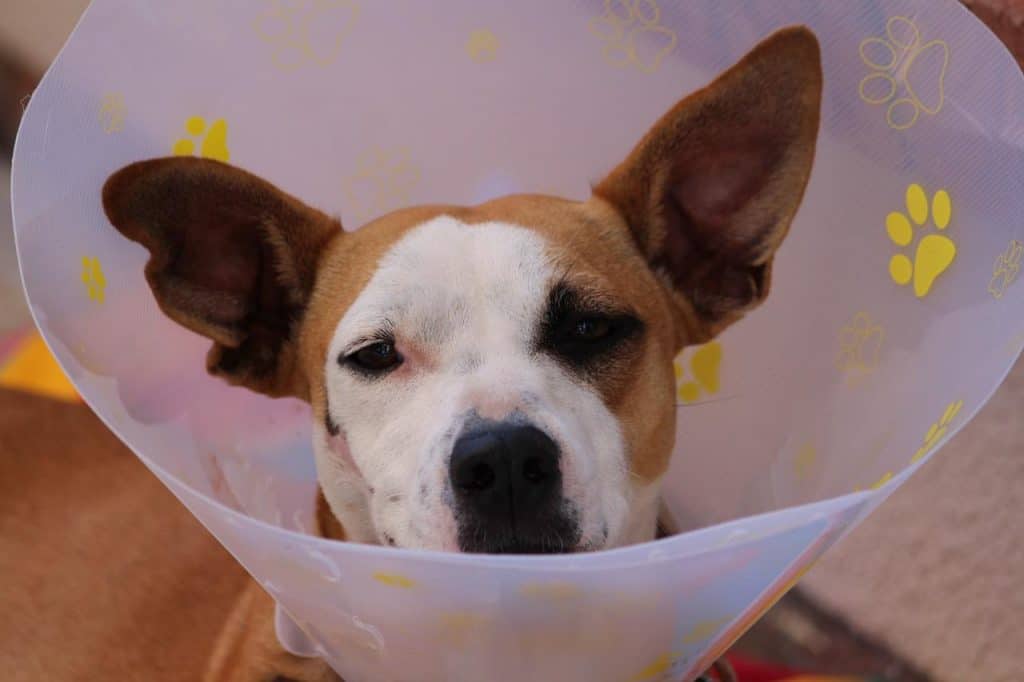 F1 and F2 dogs can have different health issues, which is why having them checked by a vet is so important.

But What About Health Aspects?

While it’s all fine talking about how an F1 dog’s coat differs from that of an F2 or F1b, there is something else to consider, and it’s the dog’s health.

You would immediately presume that an F1 dog would have a high chance of developing illnesses linked to either parent, which is partly true.

However, the world of breeding dogs and these generations is not always as straightforward.

One major positive factor is that both parents are purebred. This differs from other mixed breeds where the lineage is a bit messier.

From a health perspective, if you look at the common health problems of the parents, then you can quickly apply them to your F1 generation. Of course, that doesn’t mean your dog will actually develop those problems.

But overall, it is accepted that an F1 dog has better health than more of a mixed breed.

What This Means for F2 or F1b Dogs

Typically, an F1 dog would have fewer health issues than an F2 or F1b dog. However, that does not mean an F2 dog would typically have poor health.

However, it still stands to reason that the more you move away from the purebred dog, the greater the chance of additional health issues developing. But there is one thing you can do to sort of counteract this, to a certain extent.

If you plan on buying an F2 or F1b dog, ask for information about the parents. You want to know they have been health checked and even genetically tested. This approach can alleviate some concern over potential health problems being passed down through their lineage.

Does it Affect the Price?

Finally, what does this do to the price you should expect to pay for your dog? Well, it does change things, but not how most people expect it.

This price difference is all due to the fact it’s easy to breed two purebreds and know what you will get in the end. When you move to an F2 generation, their popularity increases as they look way more like what people expect the crossbreed to look like. Well, at least in the case of Doodle dogs.

So here’s an example.

Breeding two F1 dogs together comes with some additional issues and difficulties, contributing to the higher price.

Even though we have covered so much regarding the differences between F1 and F2 dogs, the one thing we don’t want is for you to get caught up on this. Ultimately, the most important thing is the character and nature of your dog rather than where they fit in when it comes to generations of breeding.

Sure it may make some difference when it comes to their coat and shedding, but your primary concern is falling in love with your dog and providing them with a beautiful home.

If in any doubt, do ask the relevant breeder for their own explanation, and don’t forget to find out about those health tests on the parents. 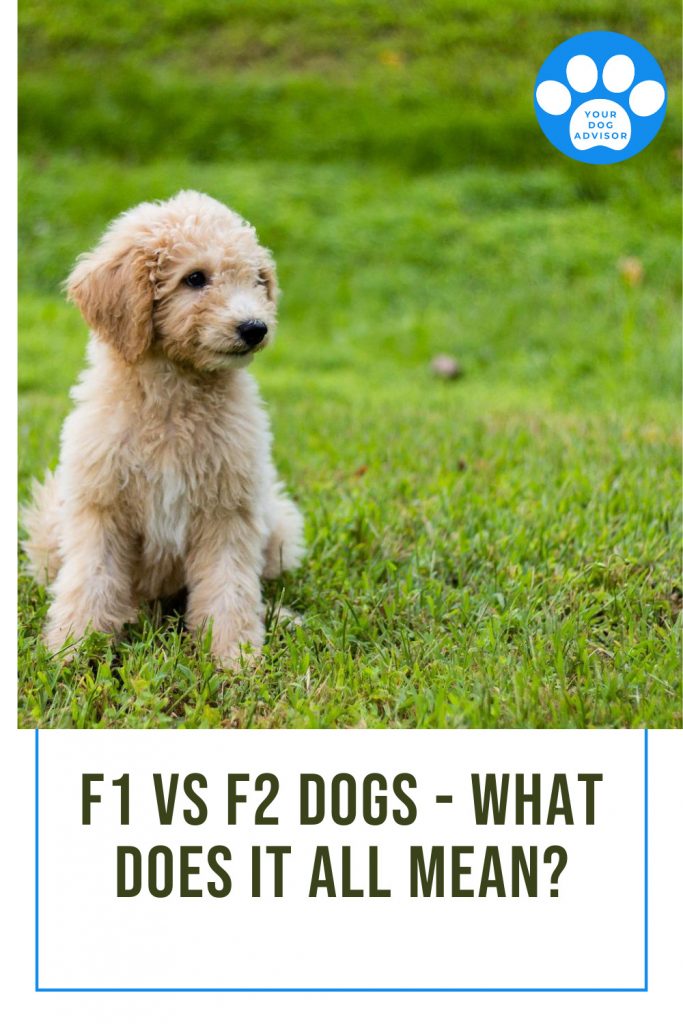 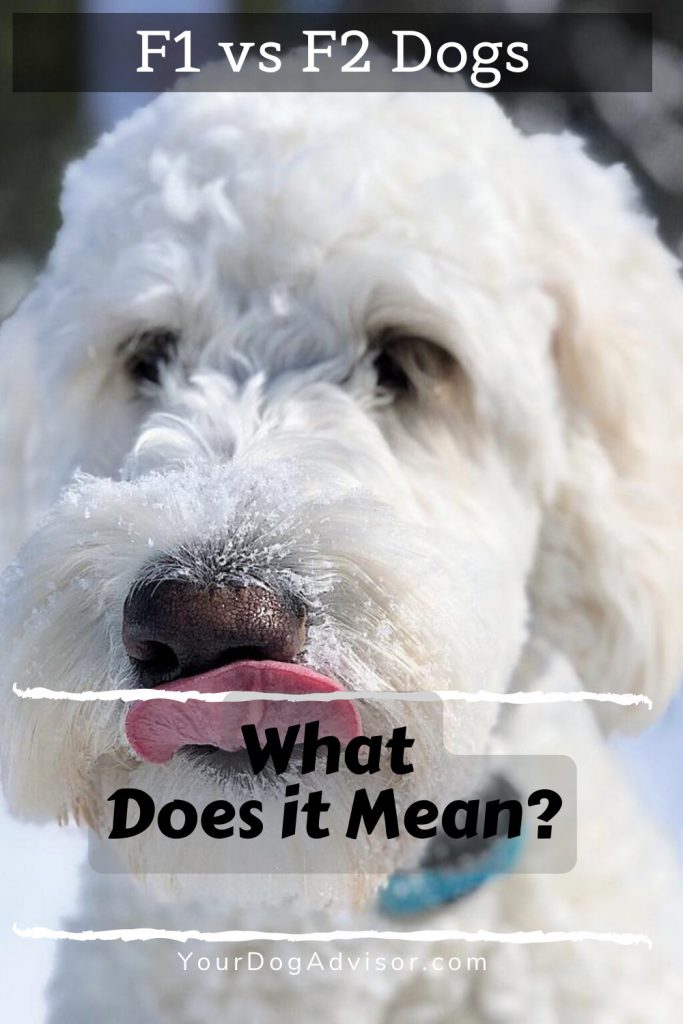