A couple weeks ago, I’d just settled my toddler down for the night (for the third time) and dropped, exhausted, into my own bed. Sleep claimed me quickly, but an hour later a soft whine jolted me awake. I was about to check on my toddler when I heard the sound again and realized it wasn’t my son at all—it was my dog, Eira. She usually sleeps through the night, I thought.

I let her out of her crate and put her outside. I stood by the window, watching to see when she’d finish her random midnight potty needs. But she didn’t go. She paced around and stared at me, big brown eyes imploring me to let her back in.

“What’s going on, girl?” I said, leading her back inside. She wagged her tail once and resisted me when I tried nudging her into her crate. “You can’t sleep on the couch,” I said. I couldn’t trust her to have the entire house to herself all night quite yet…or so I thought.

I offered Eira a little bit of food and water, which she sniffed at but didn’t take. She wagged her tail again, and she didn’t seem sick or injured in any way.

So I straightened the folded sheet inside her crate and closed her back in.

She started whining again two seconds later. And that’s when I realized that the old, flat pillow I usually put under the fitted sheet in Eira’s crate was sitting on top of the crate, not inside it. Like the princess in the old fairy tale “The Princess and the Pea,” Eira could feel all the plastic contours of her crate even beneath the soft folded sheet. 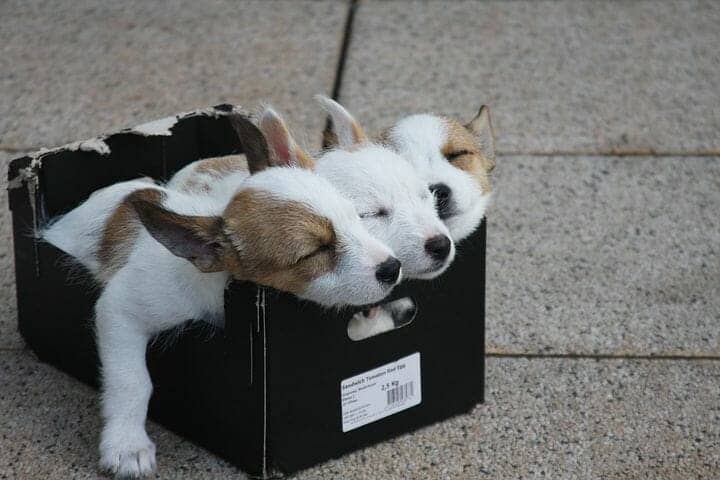 I laughed a little, slid the pillow back under the sheet, and patted Eira good night.

A few hours later, she awoke…again. “What?” I said. “I already put your pillow back!”

I waited for her to stop whining, which she eventually did. But periodically throughout the night, she’d shift noisily around in her crate, waking me up anyway.

Honestly, she slept worse than my toddler for about a week!

Finally, after the sixth or seventh night, I had an epiphany. (Or maybe I just finally decided to actually listen to what my dog was telling me.) After yet another midnight wake-up call from Eira, my weary fingers fumbled with the crate latch. Eira bounded out and instantly curled up on the couch. She was five months old, almost as big as my German shepherd, Bella, had been when she died. She’d been jumping on the couch all week when I groggily let her out of the crate to see if she needed to go outside, or drink water, or have a snack. 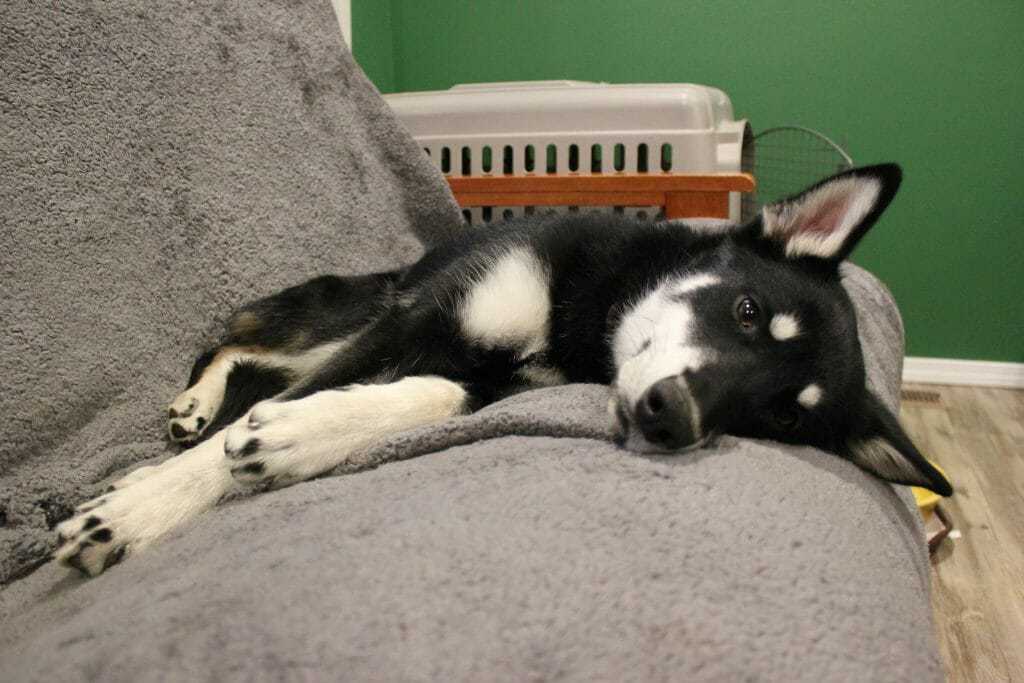 Eira on her beloved couch.

But finally I realized that she was trying to tell me something: she was done with crate-sleeping. After two months of sleeping through the night in her crate, Eira Violet wanted to move on to bigger and cozier places.

It would’ve been easy, I guess, to tell her to get off the couch and get back in her crate. The living room was only half clean: an unfinished plate of macaroni and cheese sat on the coffee table. Cups of water perched here and there. I’d dumped the day’s coffee grounds in the garbage. What if she knocked over the spring-lid can, opened it, and consumed potentially deadly amounts of caffeine? 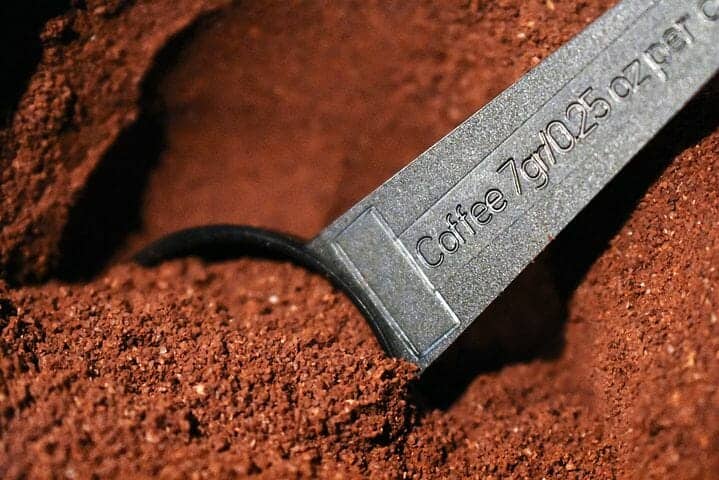 Never let your dog get ahold of coffee grounds-—they’re deadly for canines.

She’s never knocked it over before, I thought. Why would she now? She seemed to simply want to sleep on the couch where she napped during the day.

So I left her there and crept to my bedroom. Since my house is small—just over 1,000 square feet—I could open the bedroom door and easily hear if Eira decided to do some nighttime exploring.

But for the rest of that night, she stayed on her couch. I found her sprawled out, belly-up, when I wandered into the living room at sunrise with my toddler. 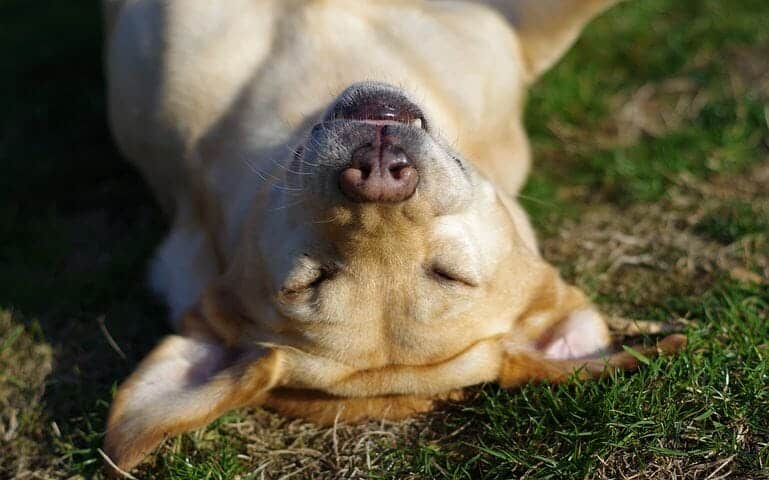 I couldn’t catch a photo of Eira in this pose, but this cute pup will do.

“Look! Puppy!” he said with a squeal. He ran over to say hi to the puppy, who he usually saw in the crate first thing in the morning.

I decided to let Eira sleep on “her” couch from the beginning of the next night. At about one in the morning, I awoke to the sound of her paws clicking on the hardwood floor. Knowing she probably didn’t need to pee, I said, “Eira, go back on your couch.”

She’s still a puppy, so of course she didn’t listen right away. She had to trot over to me first and give me a sweet, sloppy lick on the hand. Then she hopped back onto the couch and curled into a ball.

The next night, Eira didn’t wake in the night at all. Or if she did, she never wandered from the couch. She certainly never tipped over the trash can, or jumped up on the stove and started a fire (one of my great fears, which she has also never done!), or peed or pooped on the floor.

Ever since then, I’ve let my princess sleep on the couch. Now we all get to sleep through the night!

Obviously, if you’ve got a new puppy, you can expect sleepless nights for a while. But if your dog’s been living with you for a while and suddenly starts keeping you up at night, check through this list of possible reasons.

Does She Need to Go Potty?

If your pup’s been sleeping at night without needing to go potty but suddenly starts needing to get up again, take a look at her evening routine. Could you give her a last serving of food and water half an hour earlier, and then push back her final potty break outside to half an hour later than usual? This way, she’ll have time to get all the food and drink she needs into her system and have more time to process it before going out for the last time before bed.

Does your dog wake you up at night to go sniff at her food bowl, hinting that she wants a midnight snack? There are several ways you can help her stay satisfied all night. First, you could feed her smaller, more frequent meals during the day to keep her feeling full for longer. Or, if you suspect the food has a lot of fillers that aren’t providing nutrition, look into purchasing a higher quality dog food. If your dog is always hungry—especially if she’s approaching middle or old age—get her checked out by your vet. She could have a more serious problem that needs medical treatment.

Does She Seem Ill or Injured?

Have you noticed a limp in your pup’s gait, or an increase in vomiting or diarrhea? If pain or sickness is keeping your dog up at night, take her to the vet as soon as possible! You don’t want to prolong injury or illness.

Has Your Home’s Routine Changed?

Maybe you have out-of-town family visiting for a week or two. Or one of your family members is away on a trip. Maybe you’ve even moved to a completely new house. Any of these situations can cause your sensitive dog to feel like her home routine needs recalibrating, so give her time to adjust—and extra cuddles during the day! Reassure her that she’s loved, and that life will feel normal again soon.

Does She Need More Exercise?

Shortly after Eira finally showed me why she wasn’t sleeping well, the snow melted here in Alaska and our exercise opportunities doubled. Now, we go to the park almost every day, and the extra exercise probably helps Eira sleep better. If your pup is restless at night, find ways to get her moving and playing more during the day. You could form a dog playgroup with other pup-loving friends, or take her to a dog park, or simply increase your daily walks from one to two. 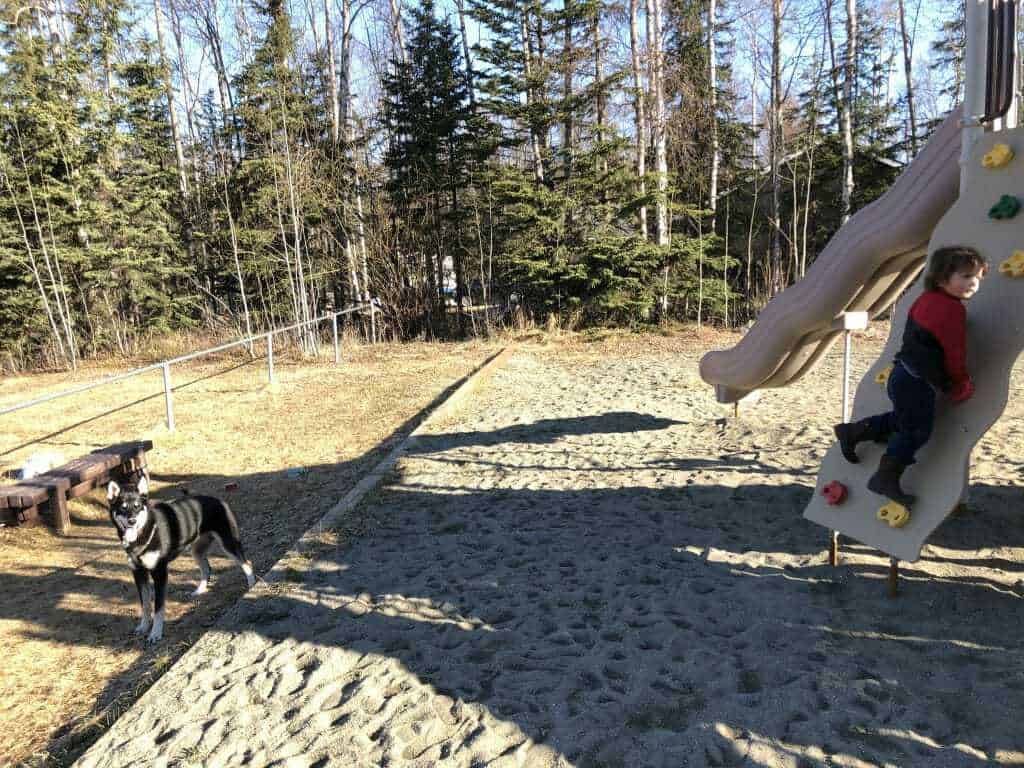 Eira enjoying a trot to our local park.

And Last But Not Least…

Once you’ve ruled out any of the above potential reasons for lack of sleep, get down to the basics. Your dog is a sentient being. She enjoys warmth, love, and comfort. Never think that just because she’s a dog, she should be able to deal with a less-than-comfortable sleeping place.

That’s why they make dog beds squishy. But maybe your pup doesn’t like her dog bed (mine didn’t) or whatever padding you put in her crate. 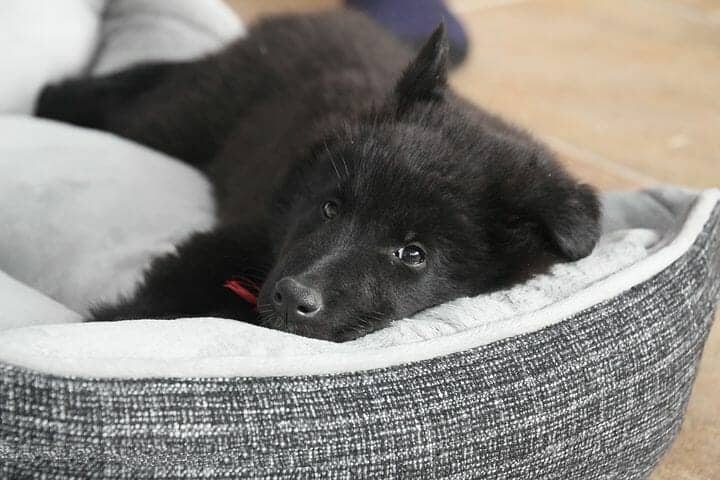 Unlike Eira, this pup sure loves her bed.

My theory for Eira is that she liked her crate fine when she was a younger puppy, but as she grew bigger, she didn’t like being confined to such a small space.

So listen to your dog. Maybe she’s telling you, in her own canine way, that she’s ready to sleep all night on the couch. (Or in your bed, although that’s not an option for me because Eira’s just too big and sprawly!)

And maybe it’s time you trusted her—safely, of course—and let her have her way. 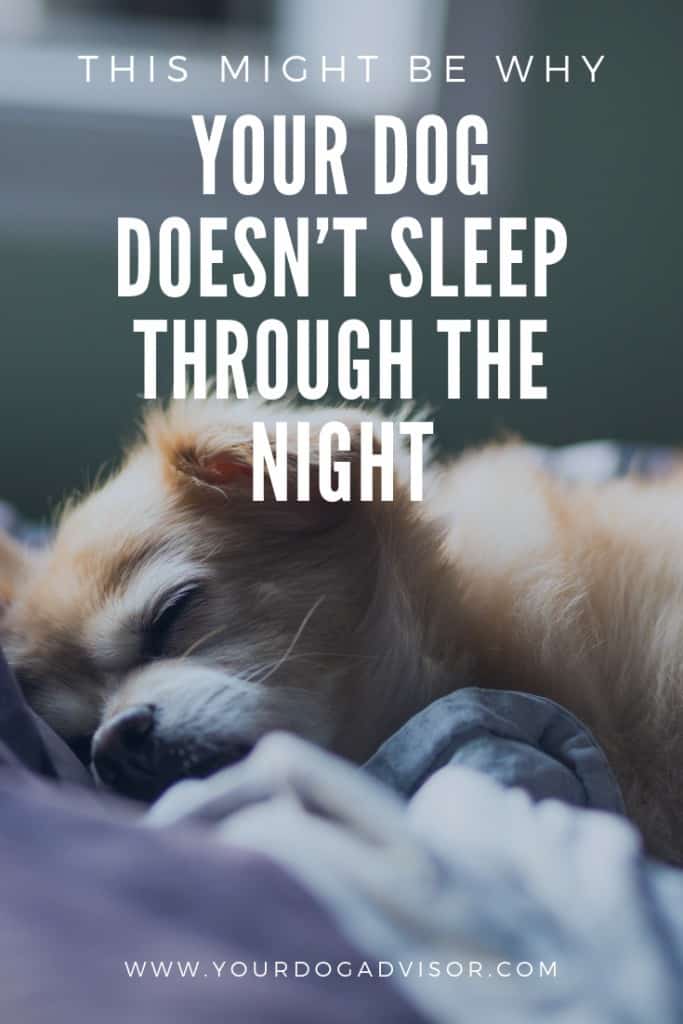