Dogs bark. It’s part of life for a dog parent and it’s usually just a natural form of communication for them. They don’t realize it may be annoying to others and they have no understanding of how loud they can get.

That said, the last thing you want to deal with when you’re trying to go to bed is barking. It’s annoying and makes it hard for you to sleep, and it can disturb your neighbors as well. So if your pup is barking at night, it’s best to find the cause quickly and deal with it.

If your pup is making a ruckus at night specifically, they aren’t doing it to annoy you. They don’t even realize they’re annoying you. They’re trying to communicate something, whether it’s a warning or just a need.

If you’re struggling with a noisy puppy at night, it’s best to find out exactly what they’re trying to say and address it. As tempting as it is, don’t just yell at them or punish them for interrupting your sleep.

If you don’t solve the problem of what they’re actually trying to communicate, they’re just going to start up again later. 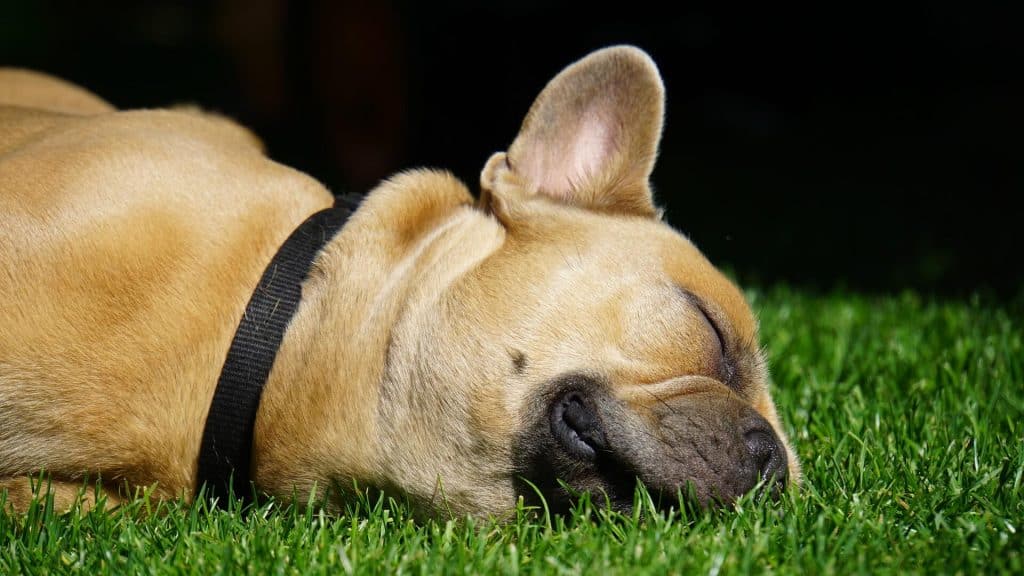 If your companion is barking at night, it’s best to find out the cause and address it rather than yelling or punishing them.

Barking can be a means of communicating all sorts of things, and listening to their barks can be a good step in figuring out why they’re making so much noise, especially in the dead of night when they should be sleeping.

Listening to the pitch of your dog’s bark can indicate what they are trying to communicate. For example, a deep, low-pitched bark or growl may indicate that they think there’s a threat.

It can also help to pay attention to how often they’re speaking and for how long. Rapid barking can indicate excitement or urgency while one or two barks could just be a minor interest in something like a passing animal outside. Constant barking with long pauses in between may be a sign of loneliness.

Instead of getting mad, try paying attention to exactly what noise your companion is making and try to figure out what they mean. You’re more likely to find a solution finding and addressing the problem than yelling at them to be quiet.

Sensitivity to Outside Noises

Many dogs tend to bark and throw a fit if they hear something close by outside. It could be another dog, someone walking by, or a stray cat. There are plenty of things that come out at night that may get your pup’s attention that wouldn’t during the day when there’s more noise.

Dogs may be especially sensitive to the sounds of other dogs. If they hear another neighbor’s dog at night, it may be setting yours off as well. They are pack animals who tend to respond to each other.

They may also feel the need to be on their guard and protect their territory and you. Your pup may be hypersensitive to all of these noises and can’t sleep because of it.

If your companion is startling awake at outside sounds throughout the night, it’s likely the constant sounds are stressing them out. Keep in mind that their barking is coming from stress in this case, so yelling at them or punishing them is just going to add to it.

This isn’t an easy problem to solve since you can’t just explain to your friend that nothing outside is coming to harm you, nor can you explain that the things outside your house are allowed to be there. They just hear threats.

Your best bet is training. Wait for them to stop fussing and reward them with high-value treats for silence. You want them to learn to associate silence with a treat. Make sure to reward them for quiet behavior when they manage to be quiet around their triggers.

If the noises outside are causing anxiety, you can also look into calming supplements and other ways to calm an anxious pup. 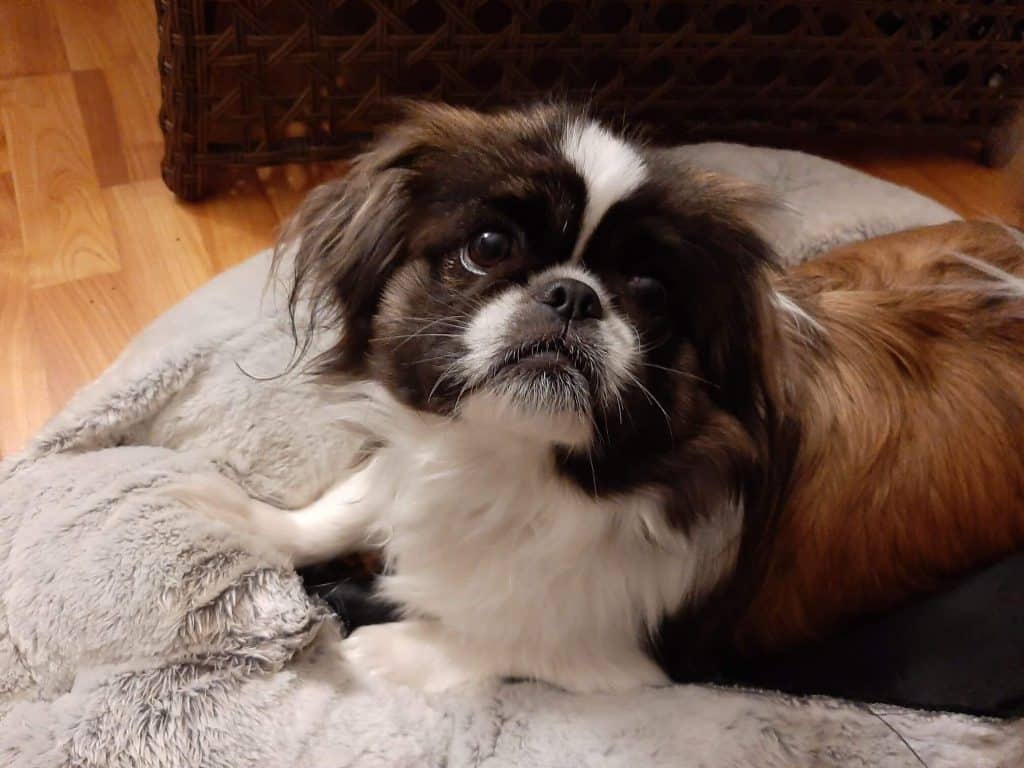 If your pup is sensitive to outside noises, they may be barking out of stress about what’s going on outside.

If you’re leaving your dog alone at night, they may get lonely or even anxious. They may start barking for you to come back to them.

Try not to get angry at your pup if they’re calling for you. Some dogs suffer from intense separation anxiety and don’t want to sleep alone. They can’t help it.

If your companion is refusing to sleep in a separate room from you, try letting them into your room with you. You don’t have to let them on the bed, and you can keep them in a crate if they’re trained for it. Just being near you can help them sleep better.

If your companion is still a bit wired up, they may be making noise for attention. They may just be a bit lonely or still want to play.

Make sure you’re not encouraging bad behaviors by rewarding or even acknowledging them. If your pup knows that making noise and and harassing you can get what they want out of you, they’ll keep doing it, day and night.

Make sure you’re rewarding good behavior and only giving treats and attention when it’s properly earned. With proper training, they’ll know that being quiet and well-behaved is more likely to get them attention than throwing a fit. 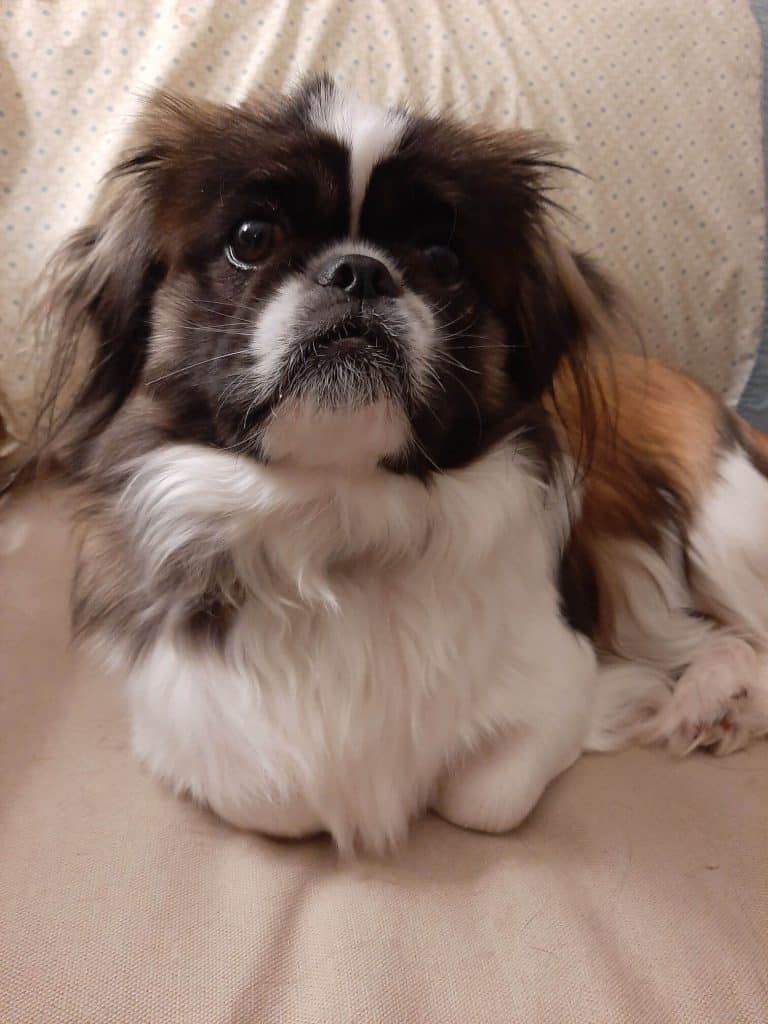 Dogs may bark at night if they’re lonely or have separation anxiety.

Like I said, if a dog is still energized they may not be able to sleep. And of course, that means you shouldn’t be able to either, as far as they’re concerned.

To prevent a hyper, noisy dog at night, it’s important to make sure you’re giving them adequate exercise and playtime during the day. Make sure they get their long walks and fun toys to play with.

Try getting some interactive toys that you two can play with together. Flirt poles and tug-of-war toys are good ways to wear your pup out. 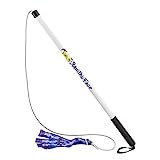 You can also try playing some games and puzzles to get their minds worn out.

If you’re keeping your pup in a crate at night, make sure you two have gone through the proper crate training. If you’ve rushed crate training or haven’t completed it properly, your pup may throw a fit every time you put them to bed in it.

Make sure their crate is a safe space for them, not a time-out corner. If they associate the crate with punishment or negative things, of course they aren’t going to happily sleep in it.

Make sure that the crate you’ve gotten is a good size for your dog. They shouldn’t be cramped with no room. If the crate is causing them discomfort, they may be fussing to tell you to let them out.

The simple solution is to let your companion sleep outside of the crate. If you’re determined to have them sleep in the crate, you may need to start crate training from scratch. 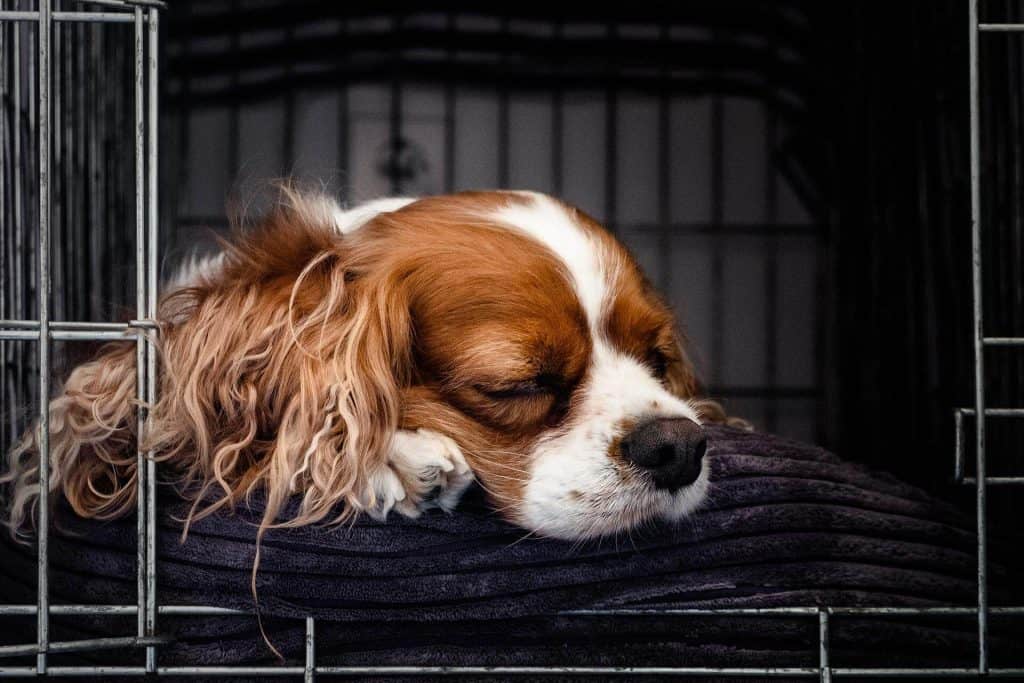 A dog whose not comfortable with their crate may bark at night if left in it.

Dogs can’t tell us directly if they’re sick or uncomfortable, so barking may be the best they can do. If your friend is whimpering, shrieking, or makes a high-pitched noise like they’re in pain, it’s important to find out what’s wrong.

Make sure they aren’t in any pain or sick. They could be suffering from joint pain depending on the season or age, making sleep difficult.

Keep the weather in mind. If you have cold winters, make sure your house is kept at a warm enough temperature for them to sleep. Make sure your pup has warm beds and blankets.

If you keep them outside at night, bring them in if it’s cold, raining, or hot. Don’t make them sleep outside in nasty weather. Even if they have a dog house, it may not be comfortable enough for them to sleep.

If they suddenly start fussing or whimpering at night like they’re in pain, watch their actions carefully during the day to see if it’s part of a larger problem. Watch where they’re going to sleep at night and pinpoint what’s triggering it.

Make sure their needs are being met during the day. If you’re not feeding them enough or giving them enough water, they may not be able to sleep because of the discomfort. We don’t like going to bed on an empty stomach either.

If you’re feeding them and they still seem painfully hungry at night, consider moving their feeding time closer to nighttime. Some dogs just burn off all that food by bedtime if they’re fed too early.

Don’t hesitate to call the veterinarian if you suspect there’s a larger problem with your furry friend. 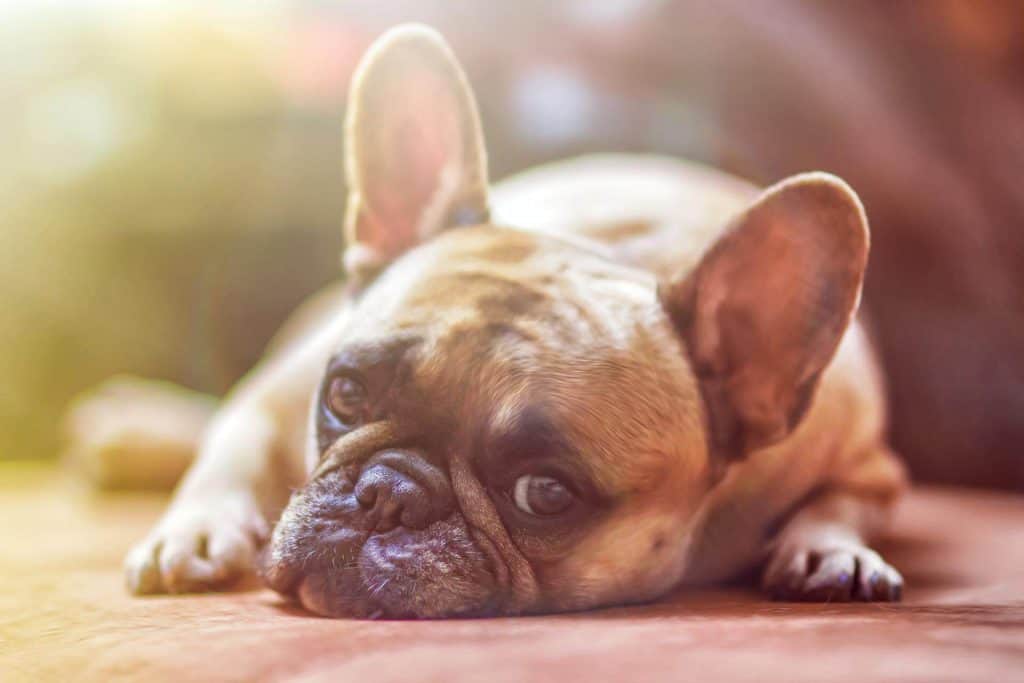 If a dog is barking or whimpering at night, they may be in pain or uncomfortable.

Late-night barking can be a pain and it can get you in trouble with your neighbors. But rushing to shut them up by yelling or punishing can just make the problem worse, no matter how tempting it is.

If your dog suddenly starts fussing at night, your best bet is to pinpoint the exact cause and address it so they can go to sleep.

If they’re lonely or anxious, let them sleep near you. Consider anxiety supplements or other anxiety soothers if outside noises are making them too anxious to sleep.

If they’re in a crate, consider crate training practices or let them sleep outside of it.

Make sure their sleeping areas are comfortable and aren’t the cause of their discomfort. They should have access to warm beds and blankets and should not be left out in the cold.

Keep your pup as active as possible during the day and make sure you’re spending enough time with them. You want them to be worn out and satisfied at bedtime.

If you suspect that your pup is barking or whimpering in pain because of a health problem, contact the vet. Contacting a trainer may also be in your best interest if you can’t get your dog’s behavior under control. 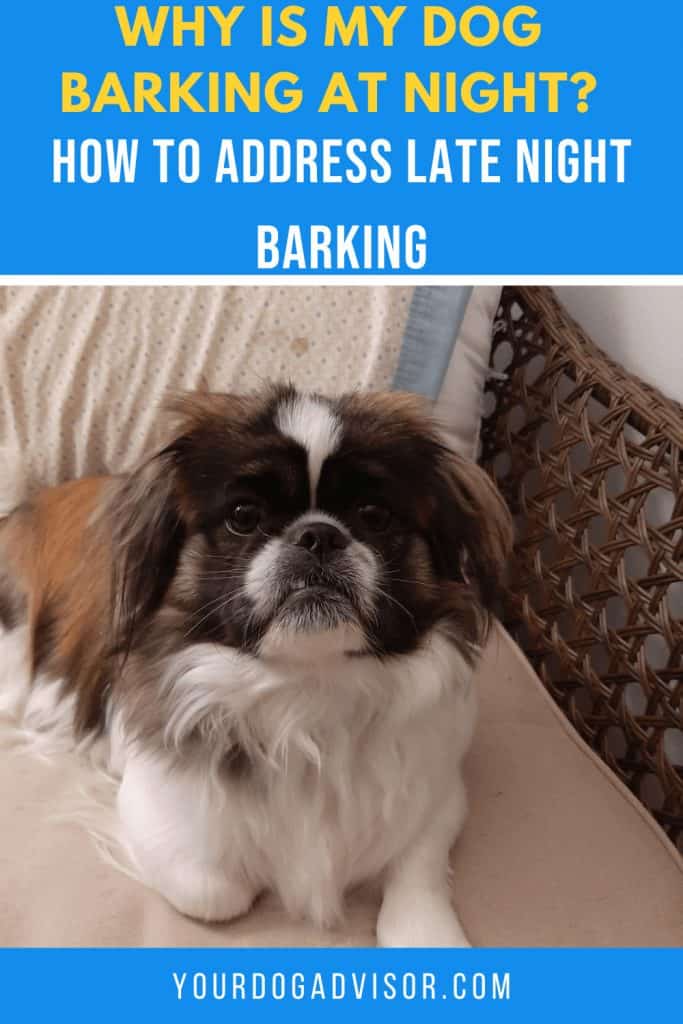 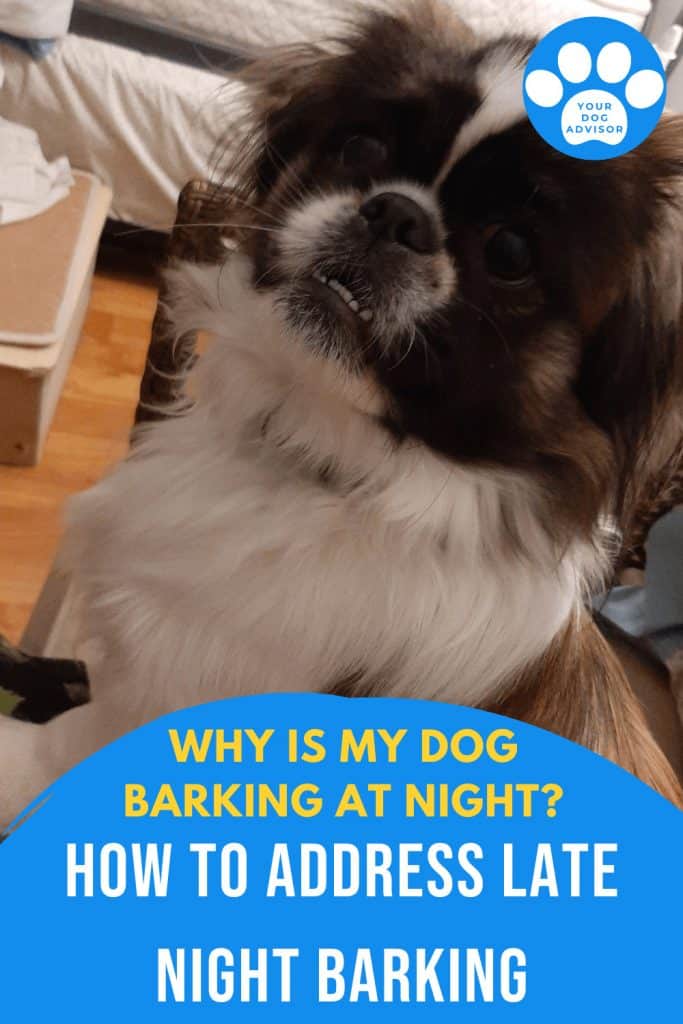