The Cavachon’s popularity is on the rise, and with good reason. Descended from the Cavalier King Charles Spaniel and the Bichon Frise, the Cavachon inherited traits from both parents, including their beautiful coats, friendly natures, and general adorability.

Sometimes spelled “Cavashon,” these dogs are loyal, loving, smart, and the perfect addition to any family.

Below are 11 standout traits of the uniquely memorable Cavachon:

The Cavachon is a Fairly New Breed

The Cavachon is credited to the Glenedon Kennel of Virginia, who bred their first litter in 1996 with their Cavalier King Charles Spaniel and Bichon Frise. Like with most hybrid dogs, breeding was intended to weed out health defects from both parent breeds while preserving those breeds’ more admirable traits. In many ways, this venture was a success, leaving Cavachons with the King Charles’ gentle-nature and the Bichon Frise’s striking intelligence.

Cavachons are typically classified as F1, F2, or F3 Cavachons. An F1 Cavachon has a purebred Cavalier King Charles Spaniel and Bichon Frise for its parents, and its temperament and appearance are the most predictable. An F2 Cavachon has two F1 Cavachons as parents, and an F3 has two F2 parents. F3 Cavachon puppies of the same litter tend to vary the most in terms of size and personality.

Since its parents are considered toy breeds, it’s unsurprising that the Cavachon runs on the tiny side. They’re usually between 12-13 inches long and 10-30lbs, and their small size makes them perfectly suited as lap dogs. 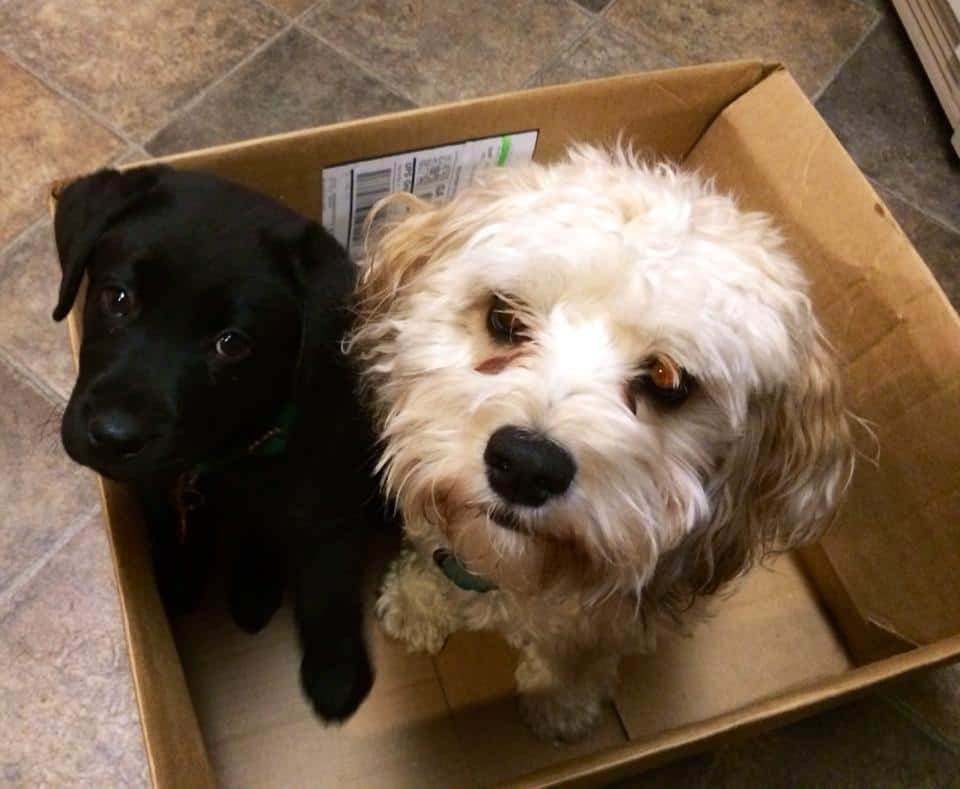 “If I fits, I sits.” My Cavachon puppy, Buddy, is small enough to fit in a box–and with his friend, Sheba!

The Cavachon’s small size means he’ll do well in apartments and condos, though he’s perfectly suited to a larger house as well (especially one with a yard for playtime). And unlike other small dogs, Cavachons aren’t yappy, so your neighbors will love them, too!

He’s Loving and Gets Along with Other Animals

Many small dogs have a reputation for being nippy, but not the Cavachon puppy! This breed loves indiscriminately, and it’s welcoming to friends and strangers alike. Their gentle temperament makes them particularly good as therapy dogs. For this reason, Cavachons don’t make ideal guard dogs, but what they lack in guard dog abilities they make up for in much needed end-of-day cuddles.

Cavachons love children, though you should always keep an eye on their interactions (due to their small size, playtime could possibly turn too rough for them). They’re also good with other animals, and if socialized early, Cavachons easily befriend other dogs and even cats! 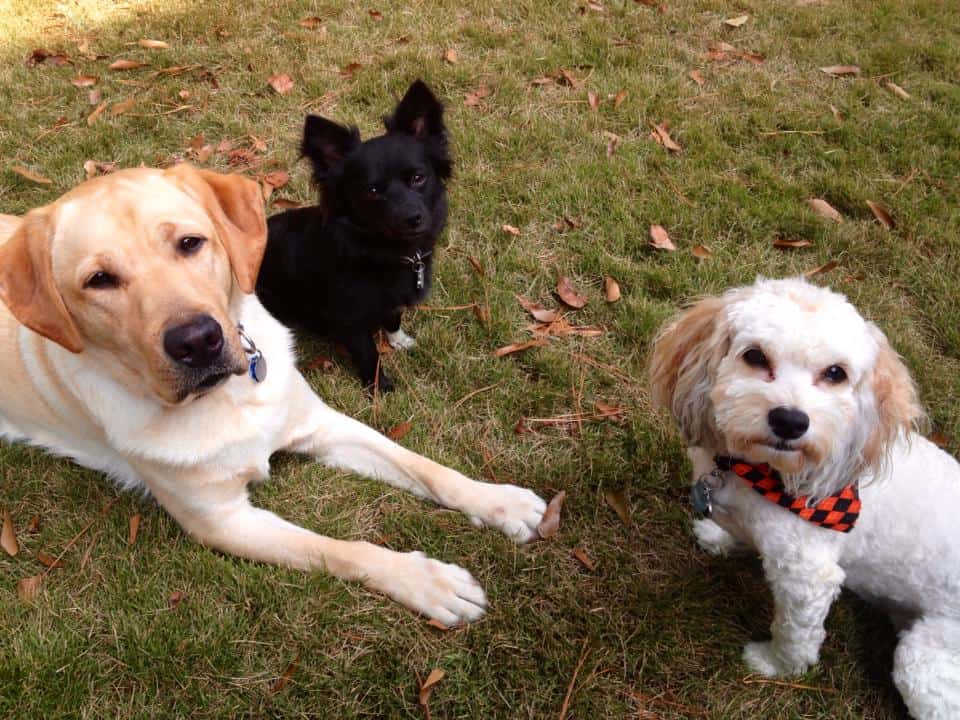 Cavachons are Considered a Designer Breed

The Cavachon has quickly become a desirable dog, in part because of the recent popularity of other designer dogs like the Cockerpoo and Goldendoodle. In a recent poll, Cavachons ranked in the top 15 for the UK’s favorite dogs, and in the US, they consistently rank among the most popular mixed breeds. Because of its popularity, adopting a Cavachon can be pricey, and average adoption costs will vary between $700 and $2000.

You Need to Look out for His Health

In general, crossbred dog breeds have less health issues than purebreds. However, the Cavachon puppy isn’t immune to all health issues, and he’s especially prone to ear infections due to his inherited floppy ears. He may also suffer from heart murmurs, flea allergies, and issues with his eyes, including dry eye and cataracts.

Make sure to have your Cavachon tested yearly for Mitral Valve Disease, which is a common but serious heart disorder. If caught early, it can be treated with medication, but if left untreated, the condition can be fatal. Additionally, due to hair growth inside of his ears, be ready to clean your Cavachon’s ears weekly with a dog ear cleaning solution.

When adopting, it’s good to have information about both parents’ health issues in order to better understand your dog’s own health. Since the Cavachon is a mix, they’re more susceptible to illnesses that are frequent in King Charles Spaniels and Bichon Frises.

Good news for allergy-sufferers! Cavachons are hypoallergenic, meaning it’s unlikely they’ll cause watery eyes or stuffy noses. However, the reason they’re hypoallergenic is due to their constant coat maintenance. They’re light shedders, but they’re also hairy, and their coats require weekly brushing. All of this grooming can become costly, so it’s good to learn basic grooming you can do at home.

Though their coats should be brushed at least three times a week, they shouldn’t be bathed frequently, as bathing can strip natural oils from their skin. It’s also a good idea to wipe your Cavachon’s eyes regularly with a wet cloth. Cavachons are prone to tear staining, which can leave sticky discolorations around their eyes.

He Can be a Variety of Different Colors

White, apricot, red, or even a combination of all three–while the Bichon Frise is known for its white coat, the Cavachon comes in multiple varieties. A typical litter includes two to six puppies, and they’ll likely differ vastly in coloring, though their coats tend to be wavy or curly. 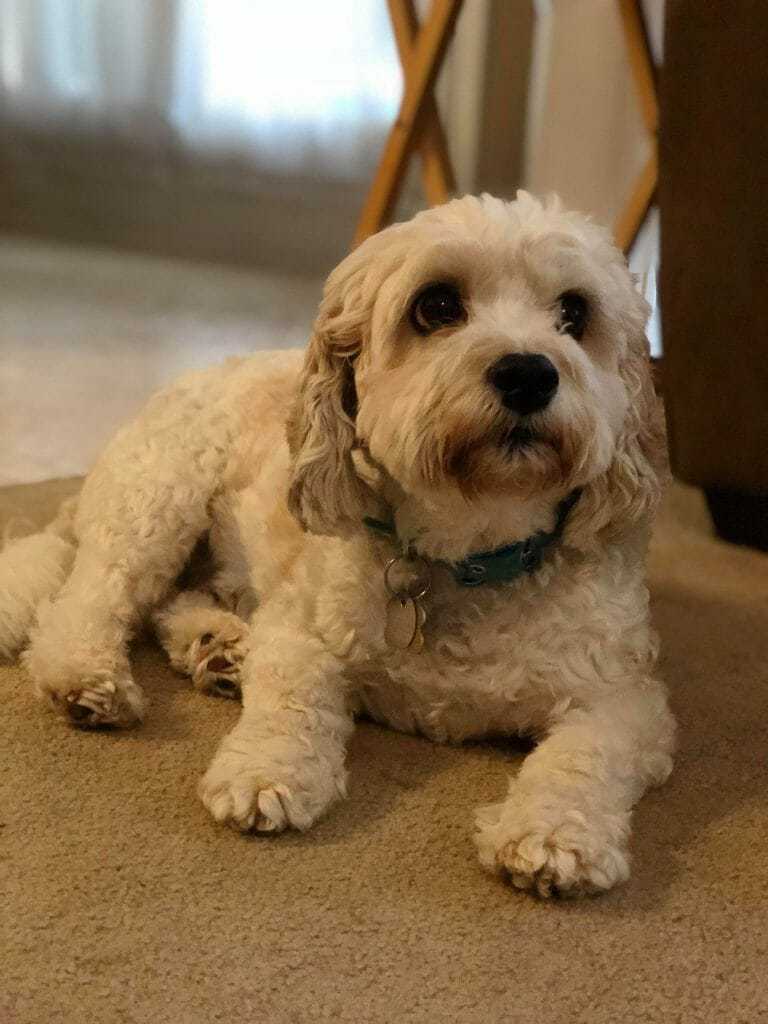 Buddy happens to be off-white and brown, and he easily blends into his surroundings!

Like its parents, a Cavachon’s eyes will be large, circular, and dark. Its nose will be dark as well, and its head tends to be round.

He Can Suffer from Separation Anxiety and Small Dog Syndrome

Because of their loving nature, Cavachons need plenty of human interaction. If left alone for too long, they can become bored, which may lead to destructive behaviors. Relatedly, they can suffer from “Small Dog Syndrome,” which leads to disobedience and excitability. However, these conditions are easily avoidable through training and socialization. If you’re still worried about your Cavachon feeling lonely, you’re in luck, because they make excellent traveling companions.

The separation anxiety and Small Dog Syndrome are the main behavioral issues to watch out for, though there are a few minor behaviors worth discouraging. For instance, if a Cavachon feels threatened by strangers, he might growl at them. Additionally, some Cavachons like to chase small animals (due to the King Charles’ prey drive) or bark when eager to play.

Like many small dogs, the Cavachon can easily live into its teens, with some getting close to 18 years old to 20 years old. However, the older they get, the more health issues they’ll likely suffer, including hip dysplasia and patellar luxation. As they age, make sure to keep up with exercise and vet appointments to keep them happy and healthy.

He Needs High-Fat Food and Exercise

Though they only eat about a cup of food a day, a Cavachon’s meals need to be high-quality, since designer breeds are prone to obesity. Their metabolisms are faster than larger dogs, so they benefit from food that’s higher in fat and protein. For every pound your Cavachon weighs, he needs approximately 35 calories of food.

Cavachons also require daily exercise, and they love to go on long walks. If you don’t have time for a longer walk, make sure to let your Cavachon run around outside (but keep an eye out for digging–they’re adventurous and can get messy!).

He is Smart and Responds Well to Positive Reinforcement

The Cavachon is easy to train, especially if you do it early. My Buddy does especially well with treat rewards, and he’s mastered sit, stay, and paw (if you’re looking for more tricks to help with training, we have you covered).

In the following video, you can see Buddy’s mastery of basic commands (and eagerness to please!):

Big-hearted, easy to train, and loving to a fault, Cavachons thrive on attention, and they easily bond with their owners. Whether you’re looking for a first-time dog or a friend for your current pet, the Cavachon is a great choice and will make a wonderful addition to your family. 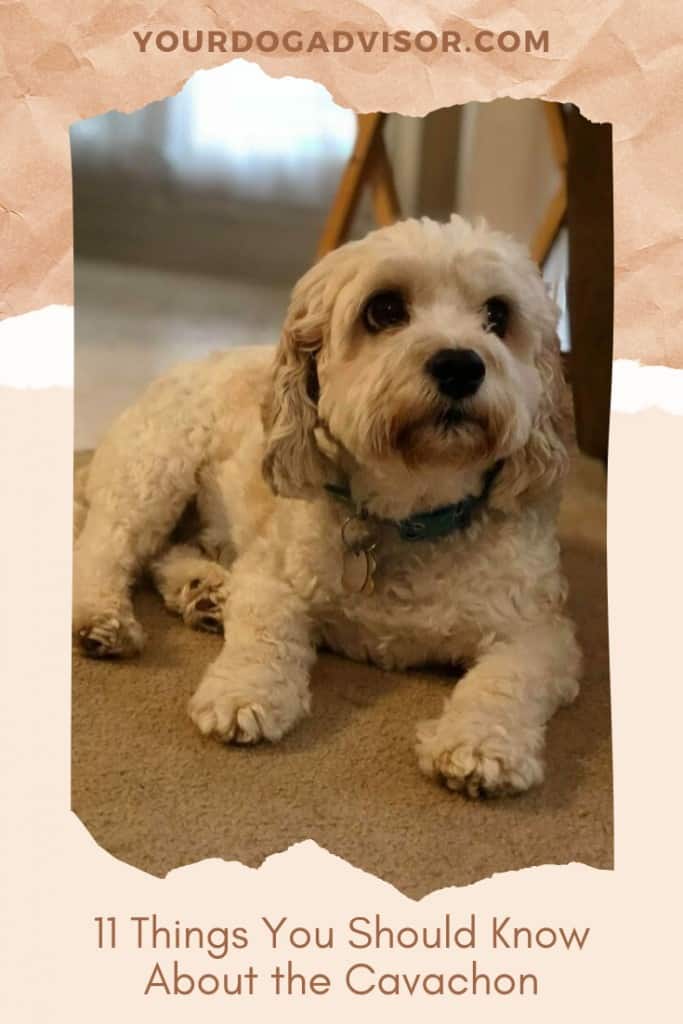