You’ve been doing your online Google searching for hours trying to accumulate a list of must-haves for your next dog. You’ve taken all the quizzes that claim they’ll pair you with your perfect dog breed and you’ve watched plenty of Youtube videos to get an idea of what you want. You’ve finally narrowed down your list to a few key points.

If a Miniature Australian Shepherd is going to be your next dog or you’re still exploring what’s out there, we want to help get you started with our 10 things we think should you should know about this package sized breed.

In the 1960s, breeders in the United States worked together to selectively breed smaller sized Australian Shepherds to create a compact version. The breeders successfully created a new line of dog that was small but kept all of the breed’s desirable characteristics.

If you’re interested in finding out more about the standard Australian Shepherd, you can check out our article here for more information. 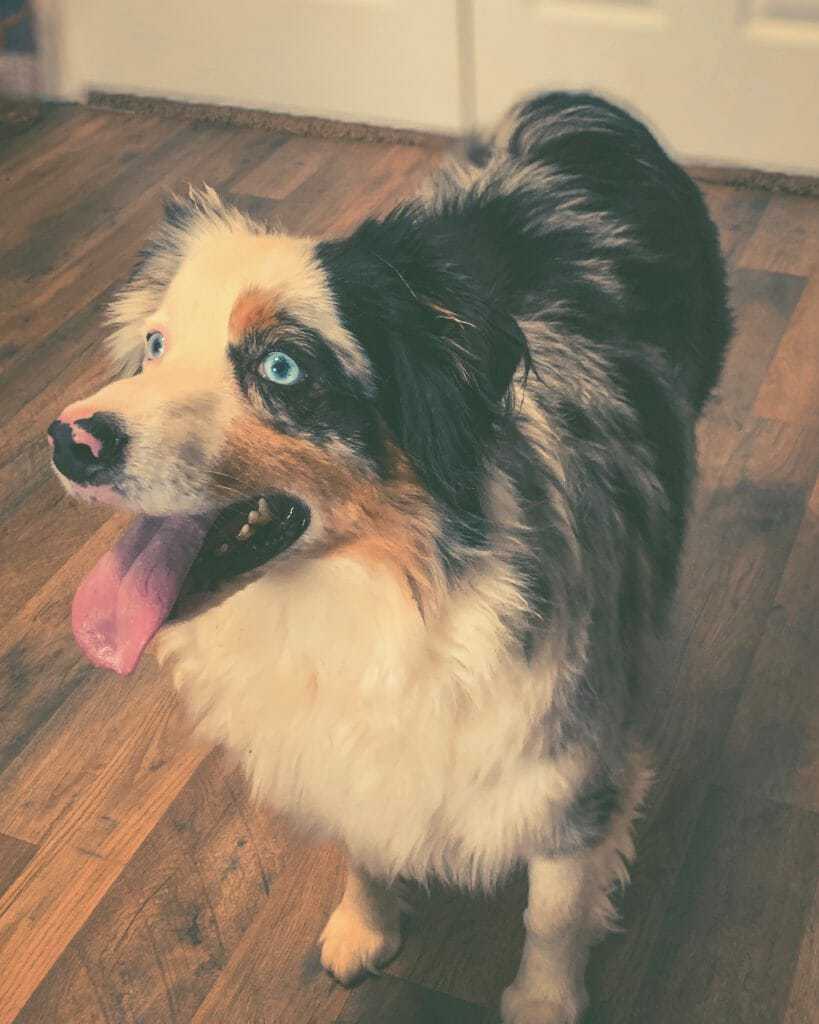 Miniature Australian Shepherds are compact versions of the standard Australian Shepherd. They can weigh between 20 to 40 pounds and stand 13 to 18 inches tall. There is little variation in size between females and males. They are literal snapshots of their standard size big brothers and sisters.

Unlike some breeds, such as the German Shepherd, Miniature Australian Shepherds have bones that are proportional to their body size. Using German Shepherds as an example, you’ll often notice that they have a pronounced angulation to their hindquarters. Miniature Australian Shepherds, on the other hand, do not have any noticeable extremes in their body structure. This allows these dogs to have balanced movements and be quick on their feet. Their small height and weight make this breed a perfect compact pooch.

This dog breed does not require an exhaustive amount of grooming. They normally shed once or twice a year because of their double coat, but are not frequent shedders. During the shedding season, they will need more frequent brushing. As a good routine, brushing can be done weekly. You may find yourself detangling mats from time to time, but aside from that, they are an easy breed when it comes to grooming. 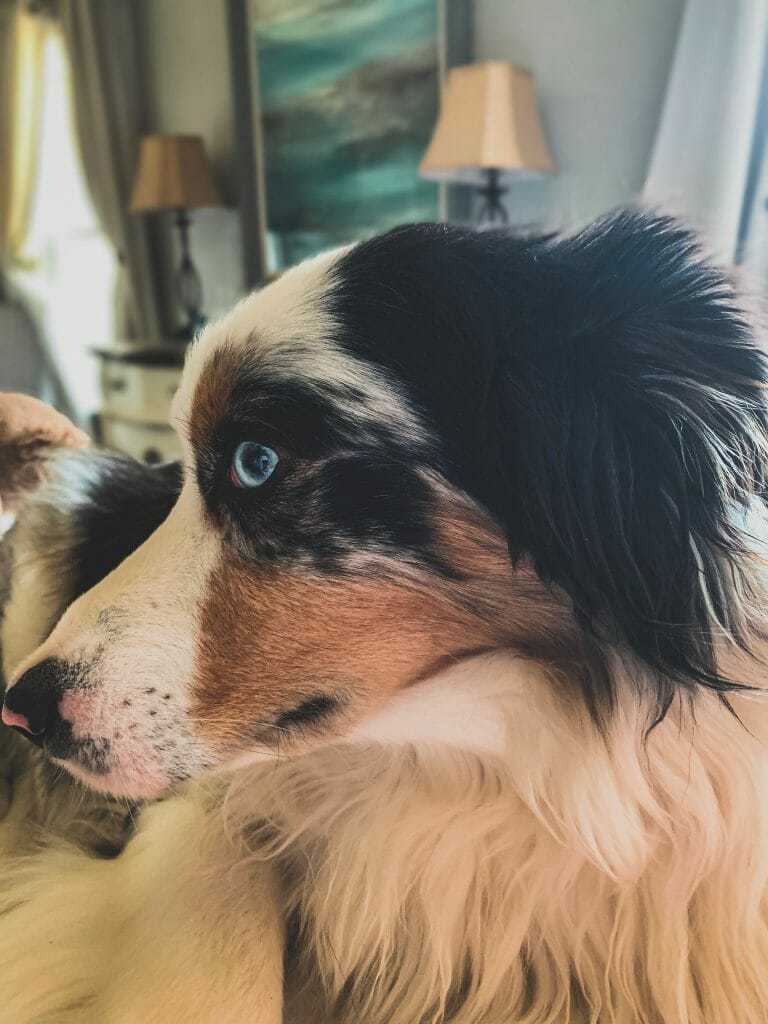 The Miniature Australian Shepherd comes in a variety of colors including black, red, red merle, and blue merle. White and tan spots are common. They have thick double coats that require weekly brushing, but no extra work.Their undercoat is dense and thick while their outer coat is long, water resistant, and wavy or straight.

When most people think of an Australian Shepherd, they think of the beautiful merle coats and bright blue eyes. They can have merle coats, but there are several other coat colors that you might see when you pick out your new puppy from the litter. They can have black, red, red merle, or blue merle coats. White and tan spots are commonly found on each of these coat colors.

Their coats are soft with a dense undercoat and longer outer coat. Their fur can be wavy or straight. Their hair can get long, so an occasional brushing or trimming may be a part of your routine, but nothing that will break the bank or become a chore. 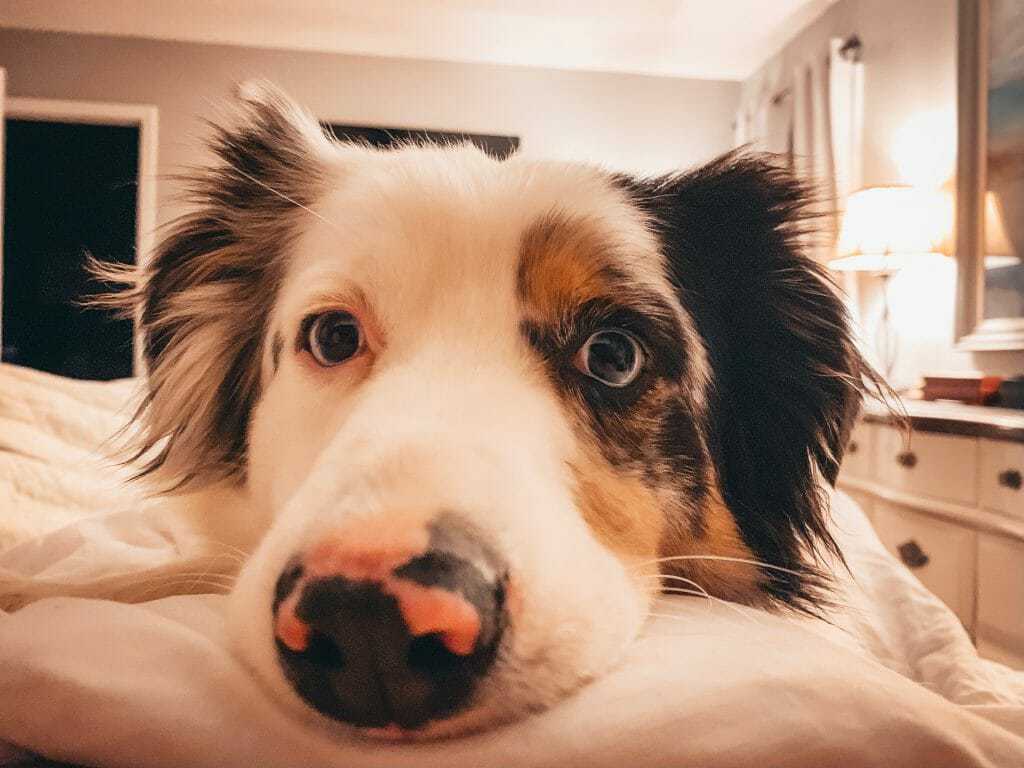 These dogs are the epitome of fun and happy. They love to play, perform, and learn new tricks. They are affectionate and protective and will jump to protect you and your family without hesitation. They are also great companions for children.

They always seem to just look happy. That’s because they are! They are an active breed that loves socializing and playtime. They are affectionate and friendly and do well with children. They love to be with their family and can get a little clingy if left alone for long periods of time. They are also protective and will let you know when someone unfamiliar has knocked on the front door.

You live in an apartment? No problem! You own a lot of land and a farm? Even better! Miniature Australian Shepherds are highly adaptable.  Their small size makes them a perfect resident in an apartment. They also thrive in areas with a lot of open space to run and play, so there’s really no place that a Miniature Australian Shepherd can’t be happy. If you do live in an apartment or somewhere where they can’t run freely, then you will need to take a little extra time out of your day to get in some good solid exercise with your pup.

Miniature Australian Shepherds can generally do well on any diet. A well-balanced diet is always a must. Foods with a higher protein content are great options since they are such an active breed. However, since they are so small, they can be prone to weight gain. If you keep your Miniature Australian Shepherd active, then you won’t have to pay as much detailed attention to their calorie intake. Otherwise, you should keep an eye on your pup’s weight and try to portion control their food throughout the day.

Despite these few health concerns, they are a healthy and rugged breed. Their average life expectancy is between 12 to 15 years. As long as they are kept healthy and active, they can live long and happy lives.

Is the Miniature Australian Shepherd Right For You? 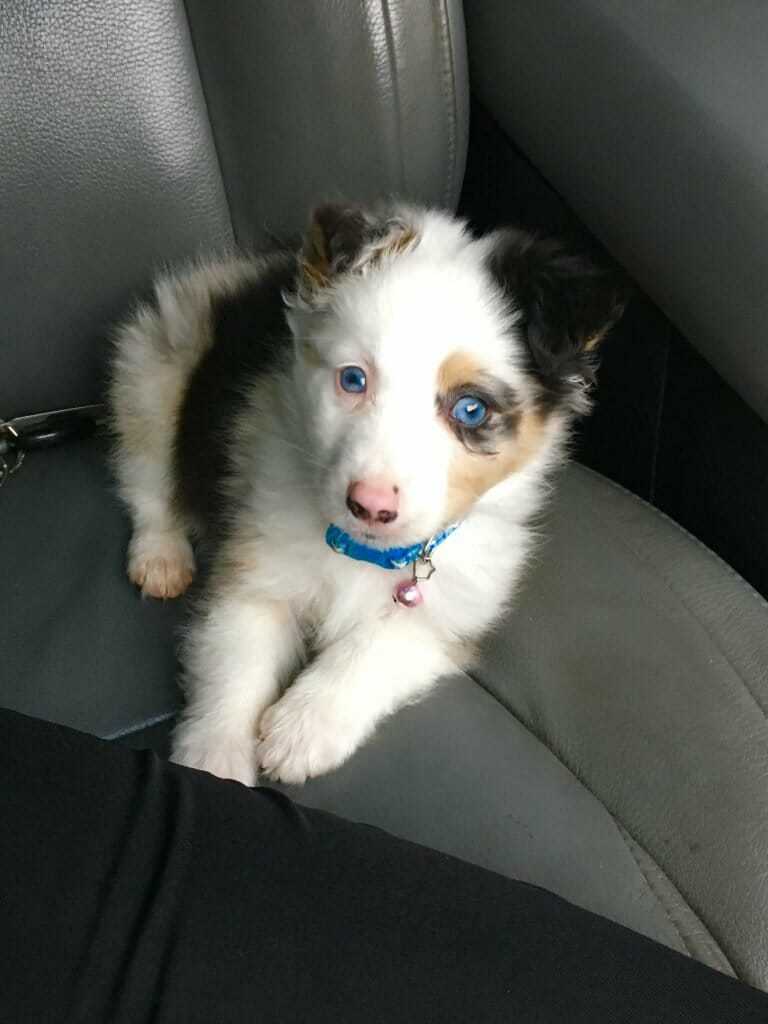 The Mini Aussie is an amazing compact package. They are intelligent, energetic, loving, loyal, and protective. They have few grooming essentials and are a healthy breed. If you are active and looking for an amazing best friend, then a Miniature Australian Shepherd may be just what you’re looking for.

Now that we’ve told you the 10 things you should know about the Miniature Australian Shepherd, here are the high points that we think are key:

This Youtube video below is a great rundown of daily life with a Miniature Australian Shepherd, and it is seriously cute.

They are a special breed. They are full of fun energy, eager to please, and will love you to the extreme. They will protect you in an instant and will be your best friend for life. They are a healthy breed with few serious health conditions. They have few grooming requirements and can do well on almost any well-balanced diet. If you want a dog that will get you excited for playtime and cuddle up with you on the couch during your Netflix binge sessions, then the Miniature Australian Shepherd is the dog for you! 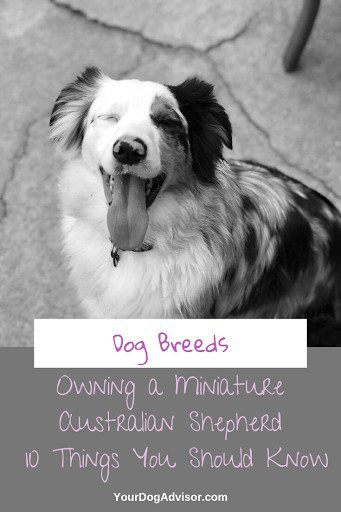