Australian Shepherds are one of the most instantly recognizable dog breeds in the world. With their unique eyes and their copper or merle coats, you know one when you see one.

The dog breed is not just easily identified. They’re also a highly intelligent and very popular breed to own, currently ranking number 16 out of 192 breeds in the American Kennel Club.

What makes this dog such a standout? Here are 15 reasons.

Their coats come in a variety of gorgeous colors.

The breed standard officially recognizes the following colors: blue merle, red merle (liver), solid black, and solid red (liver). It also notes that the dogs are allowed to have white markings and tan points, but they don’t have to in order to show. Blue merle and black dogs should have black noses and lips, and black-rimmed eyes. Red merle and red dogs should have liver (red) noses and lips, and liver-rimmed eyes. 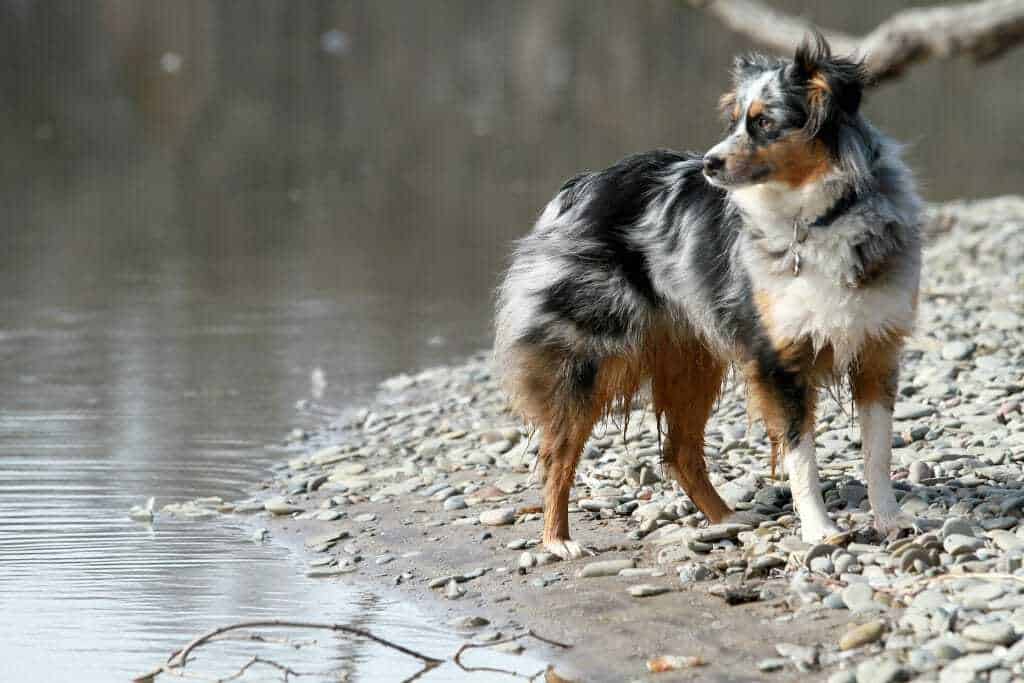 This Aussie has the beautiful merle coloring that so many people associate with the breed. Also note the white and tan markings that meet the breed standard. They also help the blue merle color to stand out even more.

The Australian Shepherd is a solid, medium-sized dog.

If you’re looking for that Goldilocks of a dog that’s not too big or too small, this just might be the breed for you. Males average 20-23 inches tall and 50-65 pounds, while females average 18-21 inches tall and 40-55 pounds. It should be noted, however, that with their fur, they can look a lot bigger than they really are.

Despite their name, these dogs originated in Europe.

It’s a crazy and fascinating story, but the Australian Shepherd was actually first bred in Europe in the Pyrenees Mountains between France and Spain. The Basque people, who were indigenous to that area, took the “Pyrenean Shepherd” with them when they migrated to Australia.

Once in Australia, the Pyrenean Shepherd was bred with collies and other dogs in an effort to create a fantastic herding dog. When the Basques decided to migrate again, this time to California, they took the Pyrenean Shepherd with them once more. Americans fell in love with the dog and dubbed it the “Australian Shepherd” because it had come from Australia with the Basques. Even though it’s paying tribute to the wrong place of origin, the name stuck. Today they’re still called Australian Shepherds, or “Aussies” for short. The dog in the American West was also used in working lines.

The eyes of the Australian Shepherd are stunning.

Without a doubt, the first thing that you’ll notice – and the thing you’ll most remember – about the Australian Shepherd is their eyes. They can have a multitude of colors from brown to blue to green, but many are born with crystal clear blue eyes that are striking. They also often have unique features, like eyes that are each a different color, or an eye that is half one color and have another color.

There is no other breed that can match their unique eyes. Native Americans gave the dog the nickname “Ghost Eye Dog” and came to believe the animal was sacred, all because of their clear blue eyes. 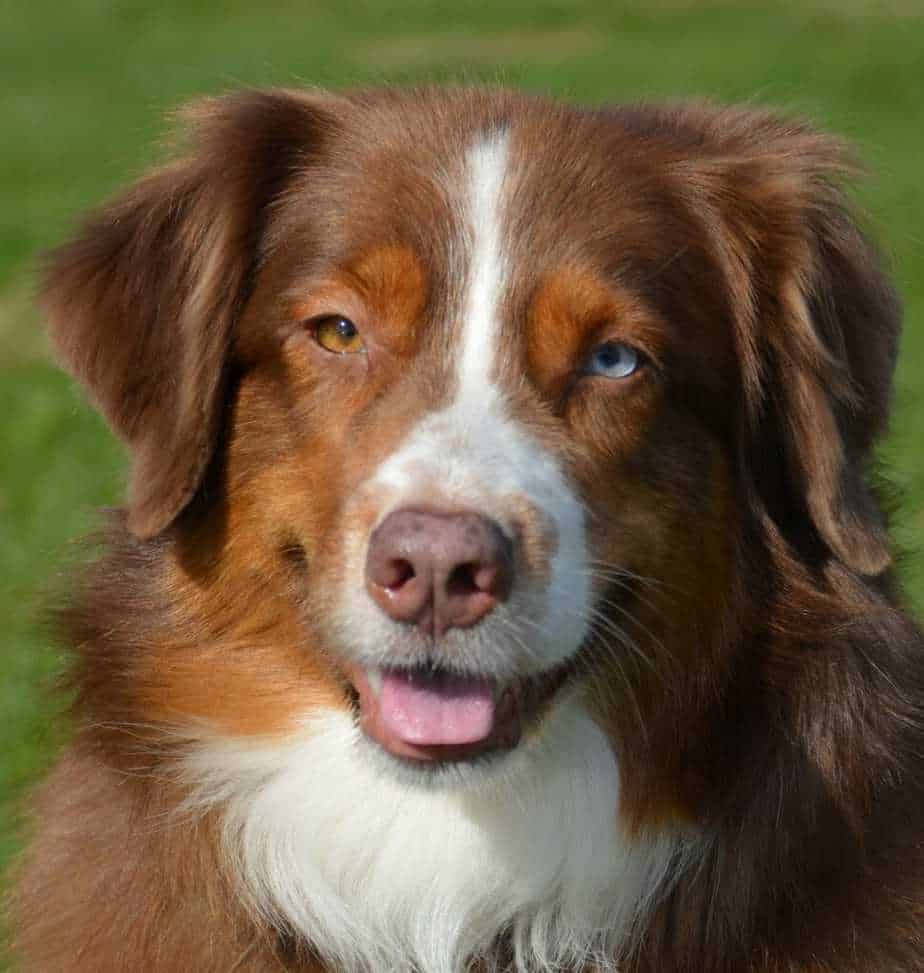 This beauty is a female with two different colored eyes, a characteristic of the breed. One of them is the famed “Ghost Eye,” that distinctly clear blue eye. On this dog, that’s accentuated even more by the solid red color of her fur. Note that her lips, nose, and eye rims are all red, which is required in order for her to meet the breed standard.

The Australian Shepherd is extremely loyal.

Aussies crave companionship. They love their people and they are loyal to their people. When they’re left alone for long periods of time, they can become destructive because they are bored and miss their owners. Because of their extreme loyalty, they can also be very leery of strangers.

Aussies are very smart and trainable.

This is a breed that was created to work. They want to herd, and they want to do jobs. They learn fast and they’re ready to go. Learning tricks and jobs also helps keep them entertained and gives them a way to release excess energy.

Their owner has worked extensively with these two shepherds. Here they perform just a couple of their tricks.

They will herd anything. Literally anything.

This dog was literally born to herd, and they take that job very seriously. They are fantastic at herding cattle and livestock, but in the absence of work on the ranch, they will herd just about anything. That includes your cars, small animals, and even children, so keep an eye on your little ones when they’re around this breed.

Aussies have a strong prey drive.

Aussie owners should also understand that what drives the breed to herd is its strong prey drive. That drive is beneficial to the breed’s ability to herd and catch things, but it needs to be noted that sometimes catching small animals can mean those animals are harmed or even killed, albeit unintentionally by a breed that just wants to do what it was born to do. Consequently, you should carefully watch your dog and restrain it around small animals and small children that you do want the dog to accidentally harm.

The Australian Shepherd can have docked or undocked tails.

Although it’s illegal to dock tails in the United Kingdom and Canada, it is currently not illegal in the United States. The official position of the American Veterinary Medical Association (AVMA) is that tail (and ear) cropping are opposed practices, and the AVMA encourages all breeds to remove docked tails and ears from breed standard. What does that mean for dog owners? Vets are allowed to do it legally, but you might have trouble finding one who is willing to do it because it’s such a controversial issue.

In the Aussies’ case, the official breed standard also notes that tails of show dogs can be natural or docked. Historically, their tails were docked to help them be more efficient at herding. It was difficult to do their job if they were always getting tails stepped on or tumbleweeds caught up in them. Many breeders today still continue the practice despite most of the dogs not serving as herders anymore. However, you will also see Aussies with undocked tails, too. 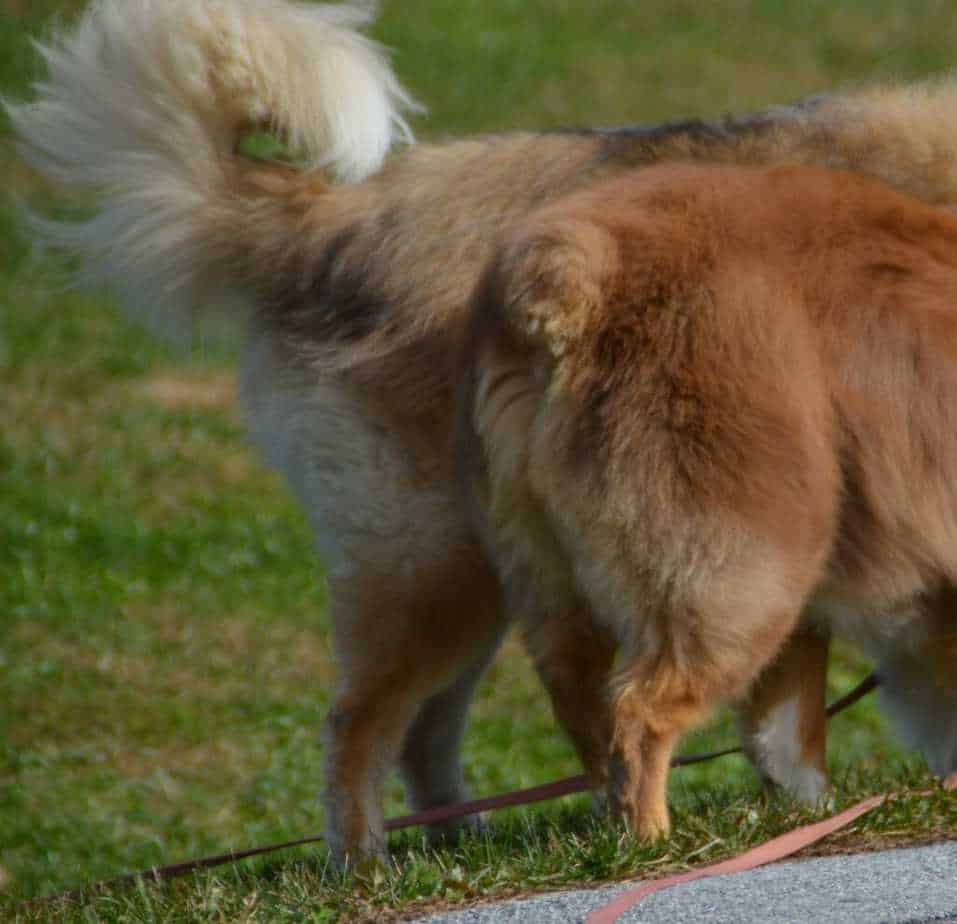 Two Australian Shepherds side by side. One has her tail docked and the other does not. The one with the docked tail had it done by the breeder when she was a newborn puppy.

Brushing is essential to their coat care.

Australian Shepherds actually have two coats: a waterproof top coat and a thick undercoat. Both shed. A lot. During peak shedding times (spring and fall), you’ll need to regularly brush both coats to pull out the excess hair. During off-peak shedding times, a regular brush on just the top coat will have them good to go. They don’t need baths often unless they get into a crazy muddy mess on one of their exercise excursions.

They need exercise – and lots of it.

Because they were born to herd and born to work, they are always looking to stretch their legs and run. They need lots of exercise and make great companions for long walks, runs, or hikes. They would also do well at a home with a fenced-in backyard where they can get out even more energy.

When they don’t get enough exercise, they become restless and bored. A bored Aussie can quickly become a destructive Aussie. Because of this need for movement, and the bad behavior (like excessive barking) that results when they are kept in a small space too long, apartment living is not the best for this breed. 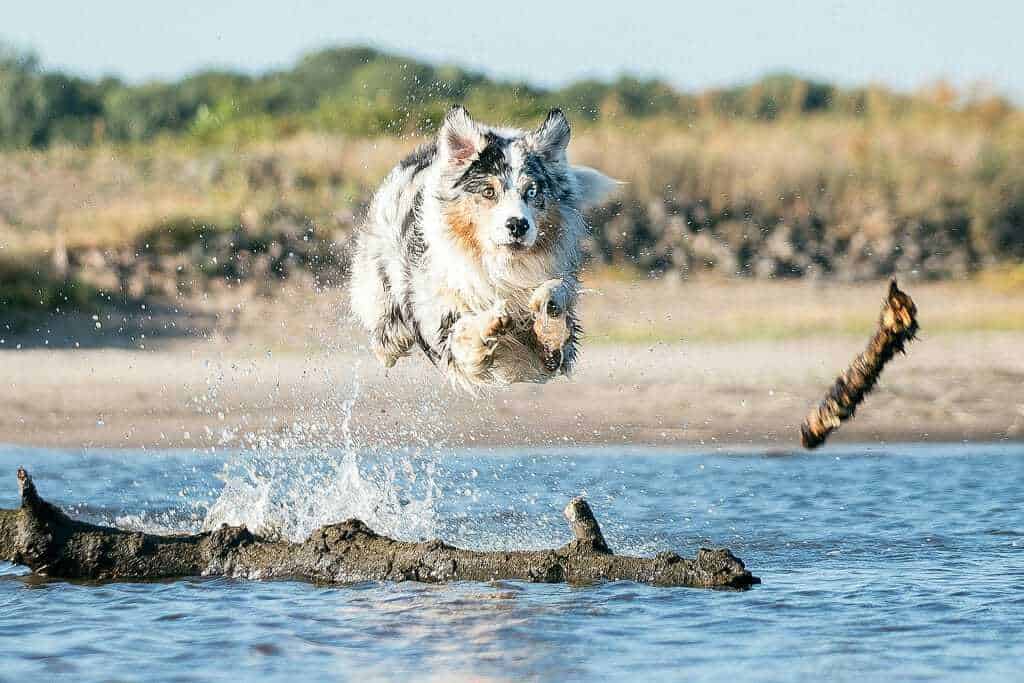 This Aussie takes a huge leap in the water in an effort to catch the stick. This breed thrives on this kind of exercise.

They once performed at the Super Bowl.

Demonstrating this breed’s stunning ability to learn tricks, Hyper Hank, an Australian Shepherd, actually showed off his Frisbee-catching skills during the Super Bowl in 1978. He and his owner were also invited to visit President Carter in the White House.

There is a miniature version of this breed, but it’s called the Miniature American Shepherd.

There is a long history about their name and how the group came to be. Miniature American are identical in appearance to the standard sized Australian Shepherd, just smaller. These little dogs are just as energetic, lively, and herd-focused as their larger counterparts. They measure 14-18 inches for males, and 14 all the way up to but not including 18 inches for females. 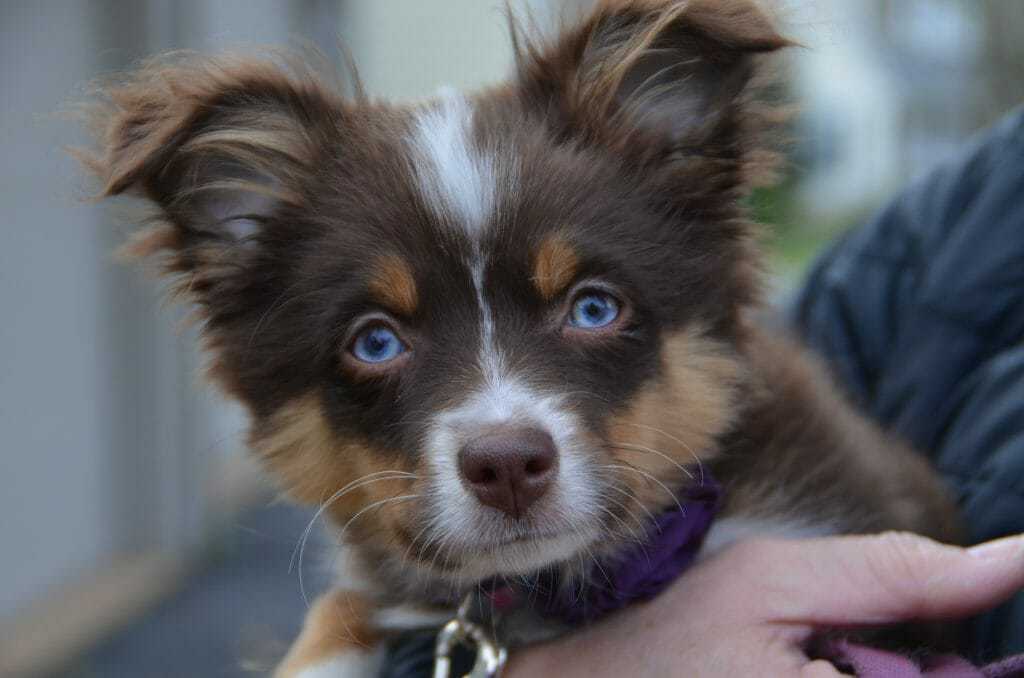 This Miniature Australian Shepherd is four months old and weighs six pounds. It’s estimated that she will be 15 pounds when fully grown. Note the eye on the right of the picture is bi-colored; the top half is green and the bottom half is blue.

Many members of this breed are sensitive to sound and may develop anxiety related to sounds like fireworks and thunderstorms. As with any breed, however, there are Aussies who have this sensitivity and Aussies that don’t. The interesting thing about this breed is that they’re barkers, so they like to make their own loud noise – they just don’t want to hear any other loud noises.

They are great watchdogs.

Largely because of their loyalty and their sensitivity to noise, this breed makes great watchdogs. They’ll be highly protective of their people and bark excessively when new people come to visit. Some can even get aggressive when “protecting” their owners, even from frequent visitors. Training them early will help to curb this behavior.

If you have the energy to match these beautiful dogs and the desire to train them, you may just have found the breed for you.