With warmer weather fast approaching, it’ll soon be time for fun outdoor BBQs. And while you should certainly invite Fido to join you for the party, an outdoor cookout could be a little dangerous for a curious (or always-hungry) canine unless you’re careful.

Here are some things to keep in mind to make your BBQ party as dog-friendly as possible so everybody has fun and stays safe. 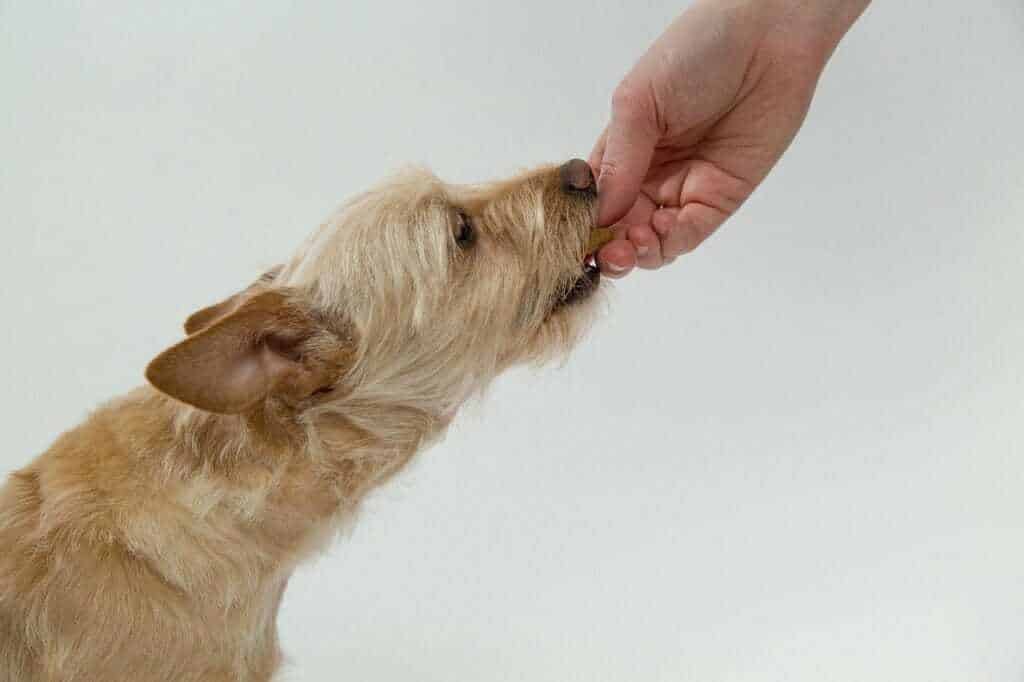 Even small bites can add up to a lot of unhealthy food.

While small portions of grilled meats off the bone (like steak, chicken and fish) are OK for most dogs, these should be fed as a treat and only in small pieces.

Skip any meats that are marinated in spicy sauces or anything too salty, hot dogs (they’re a choking hazard and are full of preservatives and sodium) and anything too fatty. While one or two tiny pieces of meat off the grill are probably not going to hurt most dogs, tons of small pieces do add up and you’ll end up with a sick dog by the time the BBQ is over, according to Dr. Carol Osborne, DVM, an integrative veterinarian and director of Chagrin Falls Pet Clinic in Ohio.

Veggies might just be the healthiest BBQ snack you can share with your pets, especially if you’re grilling things like zucchini or peppers. But onions, garlic, and scallions are a no-no, according to a study published in Frontiers in Veterinary Science. The study, which lists household food items poisonous to dogs and cats, places members of the Allium family high in the list of dangerous veggies, adding that onions in particular can cause vomiting, diarrhea, anemia, and even convulsions.

Corn itself isn’t bad for dogs, but the cob itself can get stuck in the intestinal tract, causing an obstruction that might require surgery. The Pet Poison Online site lists corn-on-the-cob as one of the most dangerous foods you should keep away from your pet during summer BBQs. 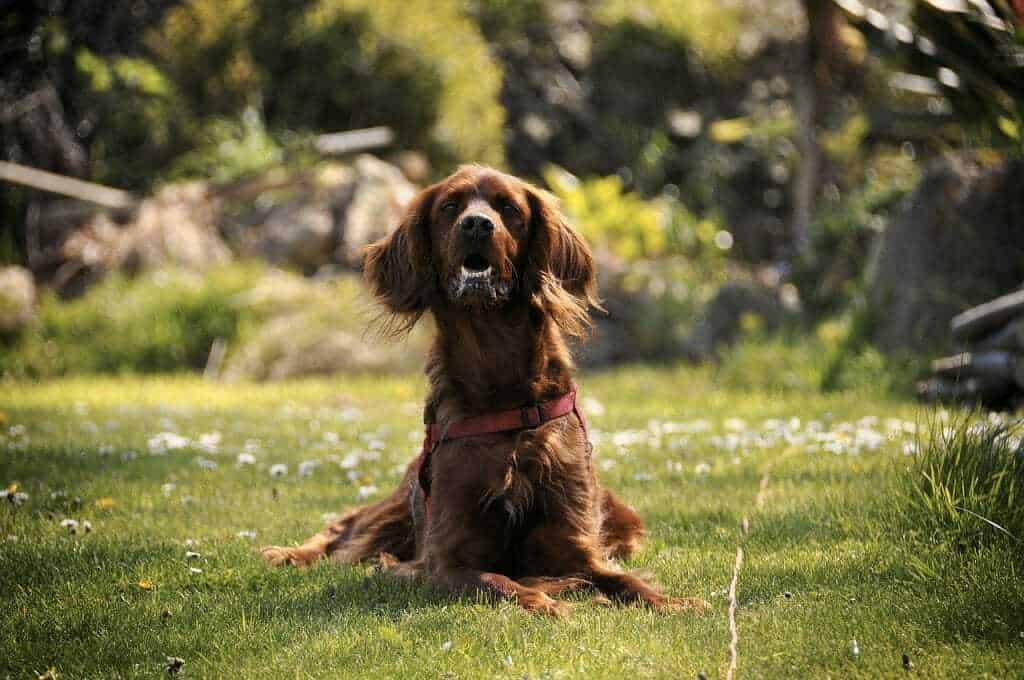 Dogs can enjoy BBQ time without having to eat everything in sight.

Bones are a huge choking hazard. According to the American Kennel Club, cooked bones, especially poultry and pork, can splinter and cause serious damage to the mouth, stomach, and intestines. Not only can they lead to lacerations and perforations, but if they lodge the wrong way when trying to pass through the intestines, they can lead to a blockage that requires surgery and could end up being fatal.

If you’re serving a seafood salad as a side dish, this is another thing to keep your dog away from. “Shellfish shells (crab, lobster) can also cause a perforated bowel, vomiting, diarrhea or constipation, or obstruction,” says Dr. Judy Morgan, DVM, an integrative veterinarian certified in food therapy.

Perhaps one of the biggest health risks during a BBQ is not the actual food, but the utensils you’re using. “Wooden skewers smell like meat and are very sharp,” according to Osborne. “And kitchen twine used to wrap chicken can be a big choking hazard.” 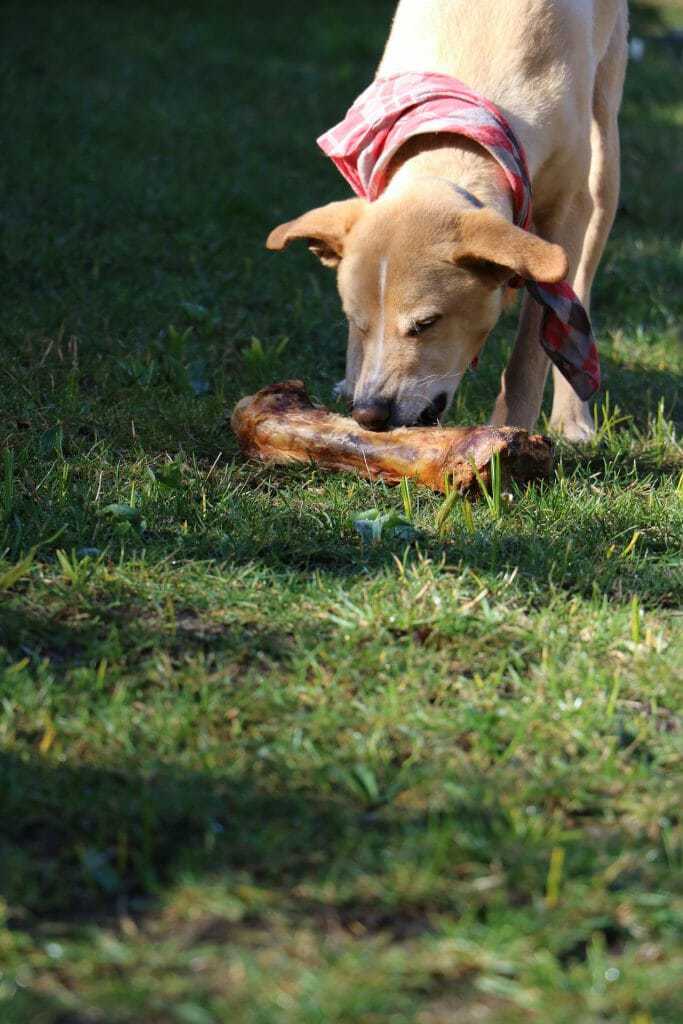 Bones can splinter and cause a lot of damage when swallowed

Keep Your Pup Away From Fat

Fatty meats and fat trimmings can break havoc in your pup’s tummy. This is especially true during a gathering, when you might have several people slipping Fido “just a taste” here and there for hours. Certain breeds like Yorkies and Cocker Spaniels seem to be more prone to pancreatitis.

Things like ribs, rich sausages, and even hot dogs might cause vomiting and diarrhea. At a minimum, they can lead to weight gain, a major cause of disease in pets in the US. Fatty trimmings from meat, as well as gravies, contain a lot of calories and can lead to obesity if consumed regularly on top of your dog’s normal food intake. 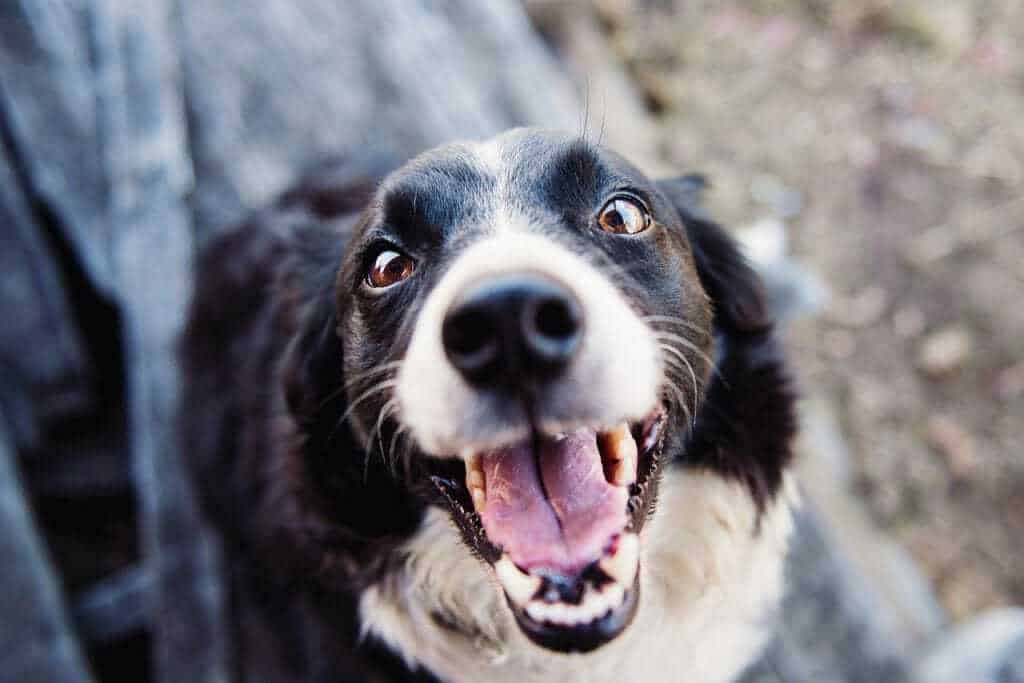 Don’t skip your dog’s regular meal before the BBQ – a less hungry dog is at least less likely to go crazy for the party food.

Don’t Let Him Play Around Smoke and Ashes

While ashes can smell attractive to your pooch – especially if fats and marinades drip into them during the grilling process– you shouldn’t let Fido grab a mouthful. In addition to being a choking hazard (imagine having a mouth full of soot and trying to swallow), ashes can also compress when swallowed and cause an intestinal obstruction.

Charcoal residues also contain a number of dangerous chemicals, including sulfur oxides, lighter fluids, petroleum, and sodium nitrate – all of which can make your pup sick.

If you have a very smoky BBQ grill, you could also be exposing your dog to smoke inhalation, which can cause throat and lung inflammation and make it hard for your pet to breathe. So either make sure you can cover the grill when your dog is around or place it in an area not easily accessible to your pooch. 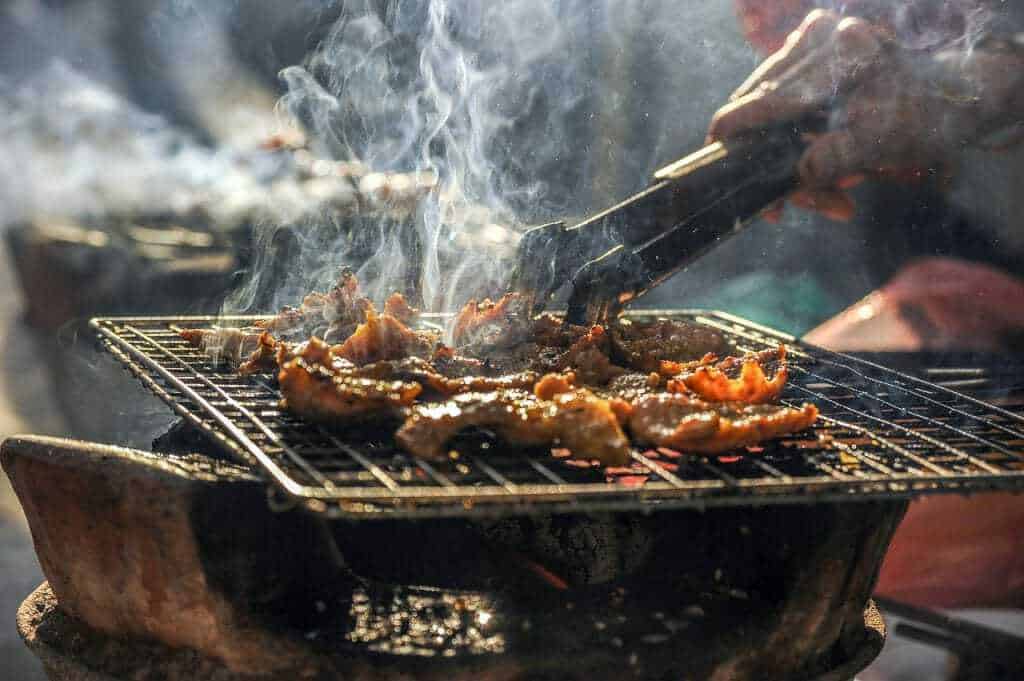 Keep your dog away from smoky grills that can cause respiratory distress and make your pup feel sick.

And Don’t Forget the Small Things

Once you’ve addressed all the main dangers that could be lurking around during a BBQ, it’s time to look at the hidden dangers. Start by making sure that all trash cans with picnic waste are covered and out of reach from your pets. BBQ trash probably smells great to your dog and you don’t want him to accidentally swallow aluminum foil, kebab skewers or plastic wrap because it smells like meat. “Certainly alcohol is not good for our pets either, as well as desserts that contain chocolate,”  Morgan says.

If you’re serving chips and pretzels, keep them away from the edges of the table too – they are full of salt, which in dogs can cause vomiting and diarrhea, lethargy, tremors, and even seizures and coma, according to Pet Poison Helpline.

With a little planning and some supervision, both you and your pup can have a safe and enjoyable outdoor experience that nobody will regret the next day.