If you’re a pet parent, you’ve undoubtedly encountered an unexpected lump or bump on your beloved companion at one time or another (or if you haven’t yet, you probably will!) Perhaps you found a small bump while you were grooming your dog, or noticed an unusual growth on his belly or one of his limbs. These unexpected findings can be very concerning, especially since, if you’re like most of us, “lump” automatically makes you think “cancer.” But the truth is that most of the growths that you find on your dog are harmless, benign tumors, one of the most common of which is a skin tag.

Skin tags are so common, in fact, that most dog owners will encounter at least one on their dog at one time or another. So here we’re giving you a few skin tag facts so you know what to do when you find one on your dog. 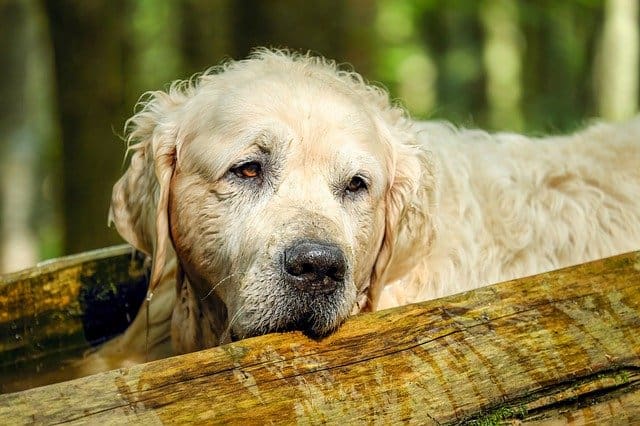 Older, inactive dogs are more prone to skin tags caused by chronic pressure on certain areas, like the abdomen or thighs.

1.Skin tags are not cancer

The term “skin tag” is a generic term for a type of benign (non-malignant) tumor that arises from fibroblasts — tiny cells made of a protein known as collagen that are part of a network of connective tissue that supports the organs, muscles and nerves. Skin tags are also known as collagenous hamartomas, fibroepithelial polyps, or acrochordons. If a skin tag involves the hair follicles and glands, it is called a fibroadnexal hamartoma.

Skin tags can form anywhere on a dog’s body, but are most common on the face, in the armpits and on the legs. They can appear as a single growth — usually attached to the body with a slender “stalk” — or in clusters of nodular growths, usually on the neck, trunk or back legs and thighs. These latter growths are known as nodular dermatofibrosis, and are quite rare, occurring most often in German shepherds. While benign in themselves, they are often associated with malignant tumors of the kidney or the uterus in unspayed females. Unlike most skin tags, they can’t be cured with surgery unless the underlying cause (the malignant tumor) is successfully treated. 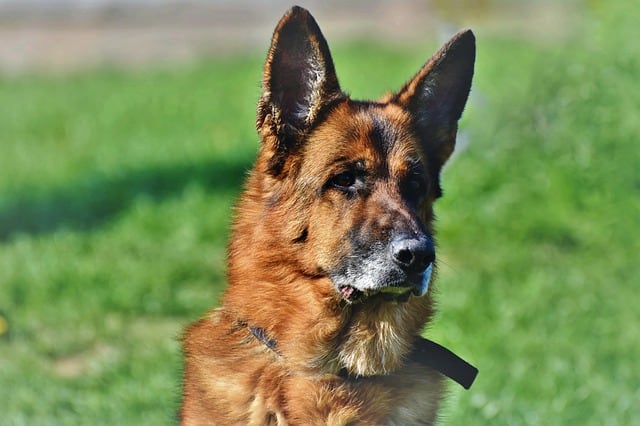 German shepherds are one of the few breeds known to develop a kind of skin tag called nodular dermatofibrosis, which is associated with malignant tumors of the kidney or uterus.

A follicular hamartoma is another form of skin tag which appears as a flat mass covered with thick hair. While uncommon in dogs, when they occur they may grow to up to 2 inches in diameter. These, too, while unsightly, are almost always benign.

2. Doctors aren’t sure what causes them

As is the case with most tumors, both malignant and benign, the exact cause of skin tags is unknown. According to Michigan Avenue Animal Hospital in Ypsilanti, Michigan, many are caused by local reactions to repeated irritation, such as a too tight collar or normal friction in the armpits or groin. Infections such as pyoderma may also cause local overgrowth of fibroblasts and lead to the formation of a skin tag. Follicular hematomas may also develop as the final stage of a viral papilloma or wart.

Skin tags are most common in middle-aged and older dogs, which is probably a reflection of the chronic irritation that causes them to form. An older dog who lies on his belly for most of the day, for example, may develop a skin tag near a mammary gland, while dogs that lie on their sides often develop them on their thighs. With that being said, many dogs will develop skin tags in areas that are fairly well protected from trauma, friction and injury, such as around the eyes or on the upper lip.It’s unclear what causes skin tags in these areas to form. 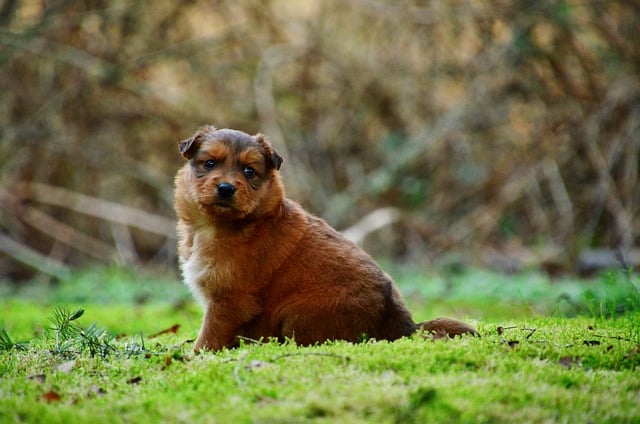 Obese dogs like this little guy are more prone to skin tags than dogs that are normal weight.

With that being said, some conditions in dogs or in their environment may contribute to the development of skin tags. Obesity, for example, is a significant factor, because obese dogs are more likely to have areas on their body where friction occurs. Other possible contributing factors include:

While there is no direct correlation between these factors and skin tags, anything that can irritate your dog’s skin can eventually lead to a skin tag. For this and many other reasons, it’s best to keep your dog’s environment clean, dry and free of toxins, and to use flea and tick prevention regularly.

3. Skin tags may still cause problems

Despite the fact that skin tags are benign tumors that won’t spread to surrounding tissues, there are certain circumstances when a skin tag may need to be evaluated and possibly removed. These include: 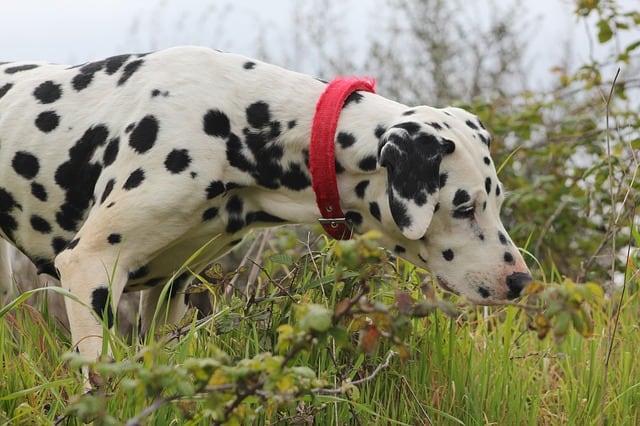 Dalmatians are prone to squamous cell carcinoma, the most common form of skin cancer in dogs. The best way to protect your pooch from this kind of tumor is to keep him out of the midday sun.

The most common type of skin tag found in dogs is a collagenous hamartoma, which generally appears as a long, relatively thin mass attached to the dog’s skin with a slender “stalk.” These are very easy to recognize, and are almost always what they appear to be. However, a number of skin cancers can masquerade as harmless skin tags as well. According to Lake Norman Animal Hospital in Mooresville, North Carolina, the most common of these include:

Squamous cell carcinoma is the most common skin cancer found in dogs. It is seen most often in older pets, especially in light skinned dogs with little fur, such as dalmatians, whippets, white bull terriers and beagles. It also occurs more frequently in Scottish terriers, boxers, Pekingese, poodles, and Norwegian elkhounds.

Squamous cell lesions usually appear on the head, belly legs and hindquarters, and vary in appearance. They may be red, raised, firm nodules, or crusty, dark lesions that look like a wart.

As is the case with human skin cancer, squamous cell carcinoma in dogs is believed to be associated with exposure to the sun (especially in dogs with sparse, light colored fur.) To protect your dog, keep him out of the sun as much as possible, especially during the summer months between the hours of 10 a.m. and 2 p.m. If your light-colored dog must be out in the sun, it’s a good idea to use sunscreen, especially if he’s one of the more susceptible breeds.

Most melanomas in dogs are benign tumors, but the malignant form of this cancer is quite aggressive and dangerous. The most common place for these tumors to develop is on the lips and in the mouth, including the tongue. But they can also appear on the nail beds and as isolated lumps on the skin. Most grow quickly, which helps distinguish them from a benign melanoma or a skin tag.

Malignant melanoma is more common in older, male dogs. Scottish terriers and Schnauzers also have a higher incidence of the disease than other breeds. 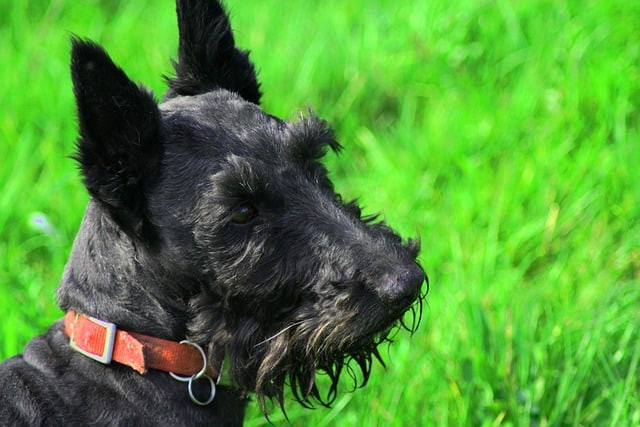 Scotties are especially vulnerable to the aggressive skin cancer malignant melanoma. Any suspicious lump on a dog of this breed should be immediately checked by your vet.

Mast cell tumors account for about 20% of skin cancers in dogs. They can show up anywhere on the dog’s body, and tend to vary in appearance from small, harmless looking bumps, to red, angry-looking ulcers. Because they are so varied in how they look, they can easily be mistaken for a benign tumor or skin tag.

Mast cell tumors are most common in middle-aged dogs, and are seen more often in Boston terriers, Rhodesian ridgebacks, boxers and pugs.

In most instances, skin cancer can be successfully treated with surgery if it is caught early. So if you find a lump on your dog and you’re not 100% sure what it is, have it checked out by your vet. She can evaluate the lesion and decide whether to take a “wait-and-see” approach, or remove all or a portion of the lesion so it can be examined by a pathologist.

For the most part, skin tags on your dog are nothing to worry about. Most vets agree that leaving the lesion alone is the best course of action unless it is in a spot where friction is irritating it, or your dog is licking or chewing it because it’s irritating him. Large skin tags around the face, especially around the mouth, can also be problematic because they may get injured while your dog is eating and then contaminated with food.

With that being said, if you and your vet decide that your dog’s skin tag should be removed, it’s usually a fairly simple procedure.. Many smaller skin tags can be removed with a laser or cryosurgery, which uses liquid nitrogen or argon gas to quickly freeze the tissue, which will then fall off on it’s own in a few weeks. This procedure is quick but painful, so your dog may need local anesthesia and a mild sedative before it’s done. The good news is that once the freezing is accomplished, the nerve endings are dead and your dog will have a painless recovery. 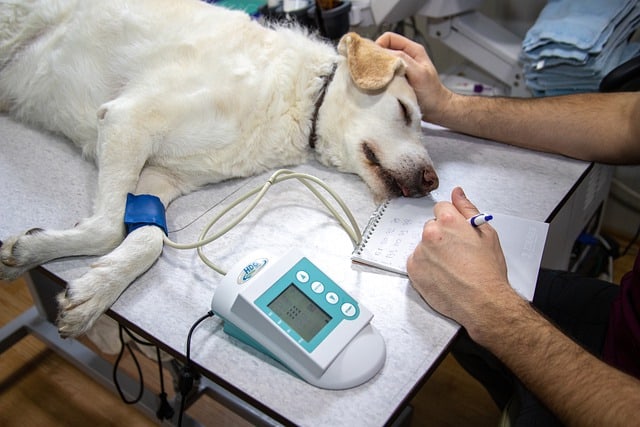 Your dog may need sedation or, in some cases, general anesthesia for removal of a skin tag.

In fewer cases, a skin tag may need to be removed surgically under general anesthesia. If you and your vet choose this route, your dog will need to have blood work and perhaps other tests done preoperatively, especially if he is older and/or obese. However, with proper care before and after the procedure, your dog should do just fine.

Lastly, it should go without saying that you should never try to remove a skin tag — even a tiny one — from your dog yourself. Pulling off a piece of tissue that’s attached to your dog’s body will undoubtedly cause him pain, and he may even bite. Leave surgery to the professionals — then you can spoil him when it’s all done.

Skin tags are generally harmless tumors that many dogs develop as they approach middle age. They are often easily recognizable, but should be checked out by your vet anyway, just to be sure. In most cases, your vet will choose a “wait-and-see” approach. But if the skin tag is bleeding, ulcerated, or appears to be infected, she may advise you to have it surgically removed. Usually a simple procedure, this will permanently “cure” the problem because skin tags don’t grow back. 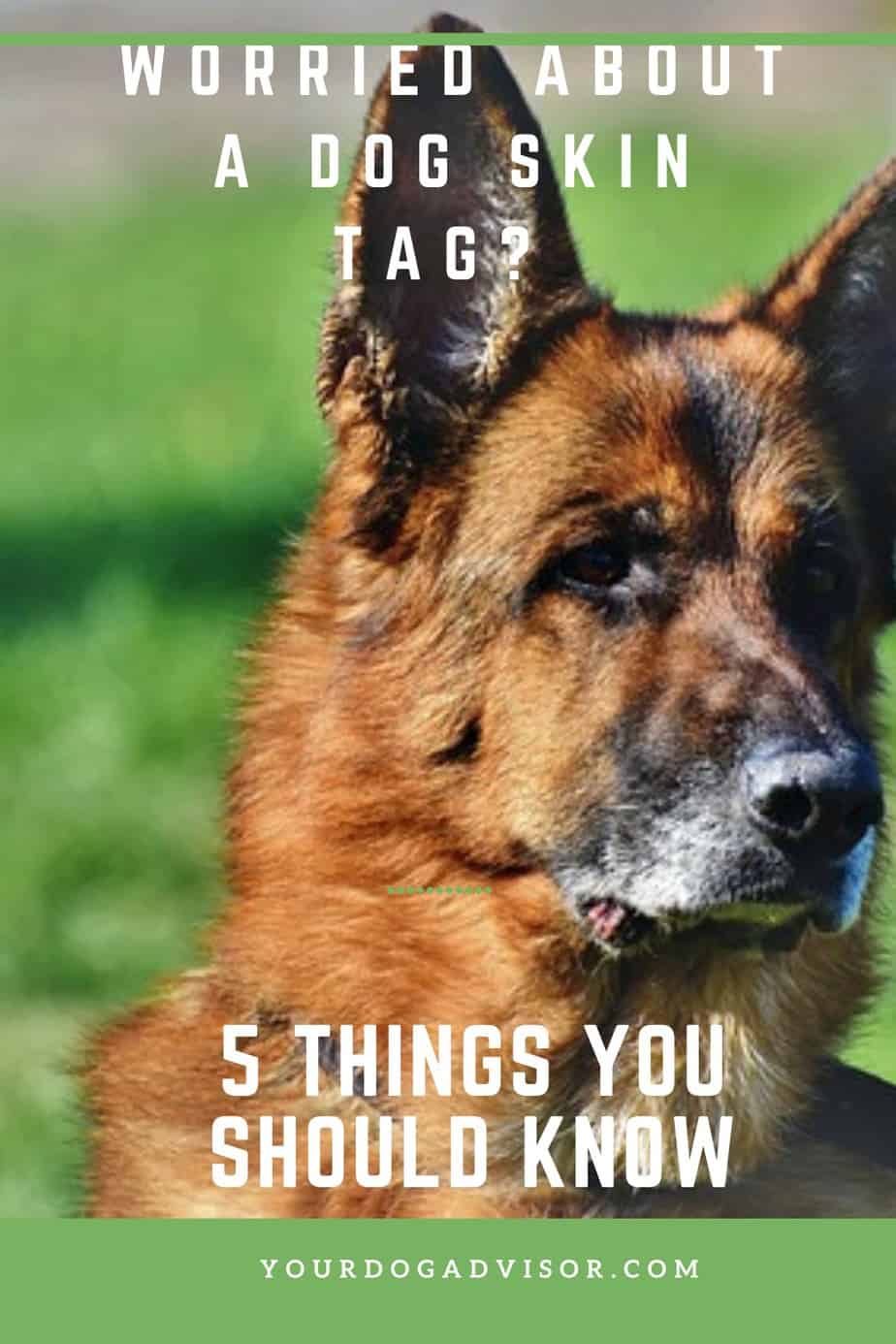 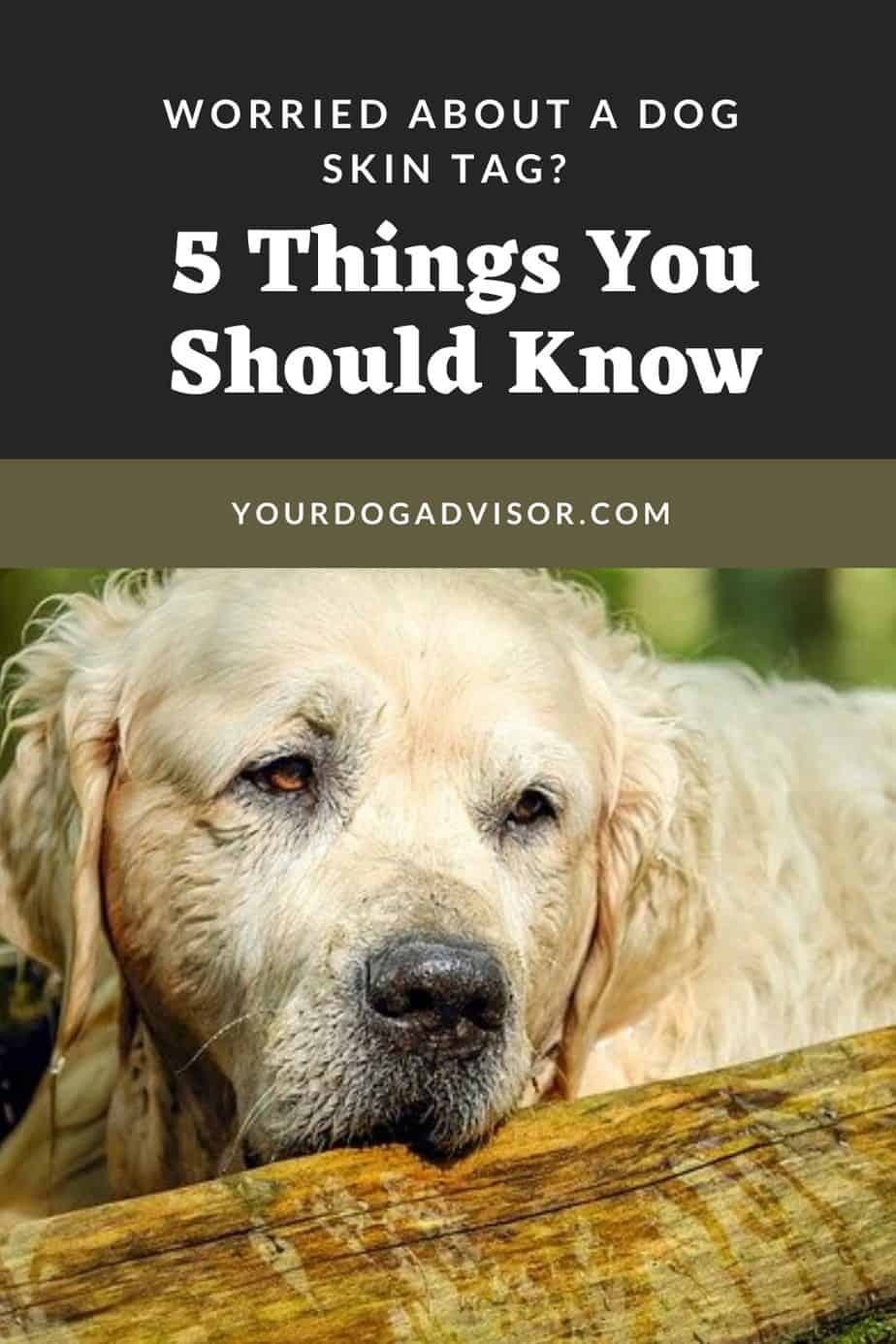