A recent study by the University of Portsmouth found that “Dogs have evolved new muscles around the eyes to better communicate with humans.”

They compared data between dogs and wolves, and came to the conclusion that dogs’ facial anatomies have evolved over time to make it easier to communicate with us.

Here’s a rundown with 11 of the most common facial expressions to look for with your dog, as well as what they mean. 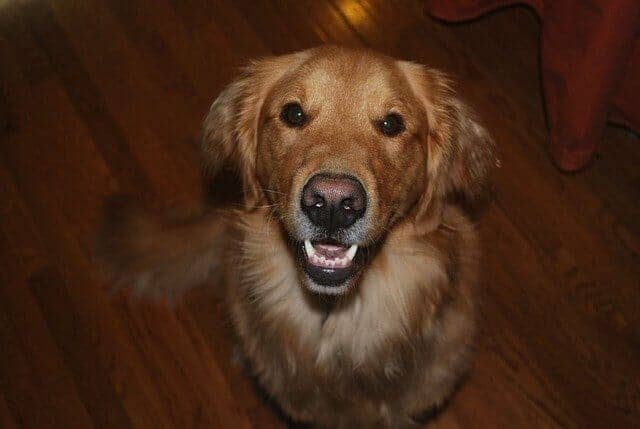 Teeth don’t have to be a problem

This is a facial expression that is often misread by humans, with good reason. Dogs will try to show deference when interacting with people in a non-threatening way, and the submissive grin involves showing a lot of teeth.

Despite being mistaken for aggression, the dog is generally attempting to be friendly. If you’re unsure if it’s submission or aggression, look at some of the other examples we’ve listed first. 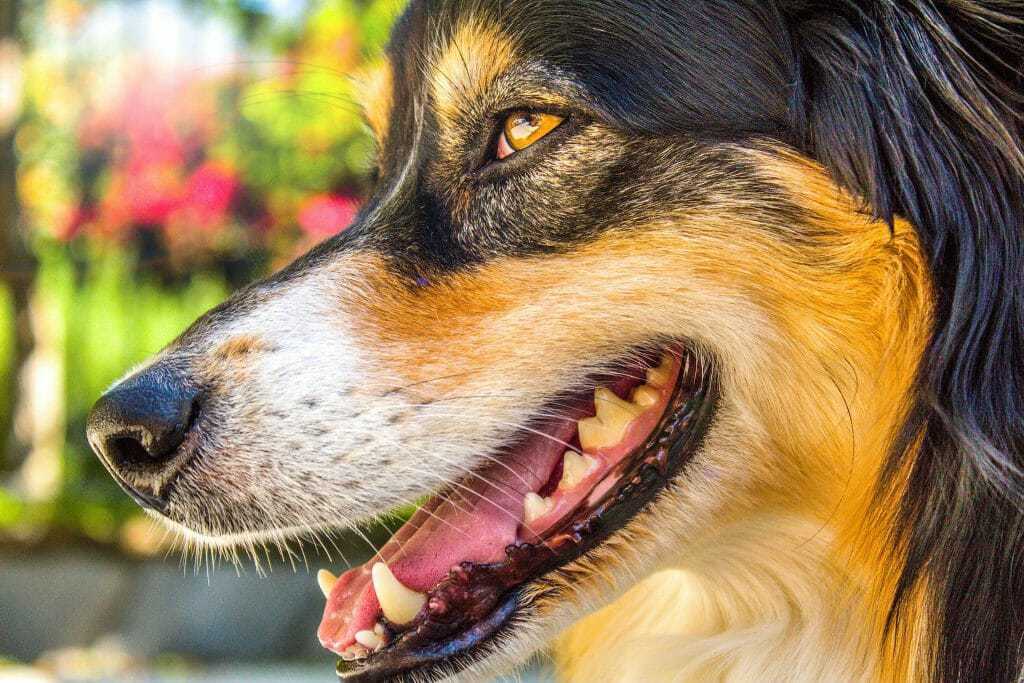 The commissures, or corners of a dog’s mouth

Commissures is basically a fancy word for the corners of a dog’s mouth. There are lots of muscles at work in the area, and they help to make it easier to understand when a dog is attempting to communicate.

A dog will generally be more relaxed if their mouth is slack, and we’ve already mentioned how your pet can grin at you to show submissiveness.

If their mouth has tightened up, it’s best to be wary as it’s often an indicator of stress. Look to areas such as the cheek for telltale signs, and be careful if your pet is baring teeth at the same time.

Some dogs prefer to pull their lips back, showing off their gnashers. If it’s horizontal, they’re generally afraid, while if the lips are pulled back vertically it’s an aggressive position. 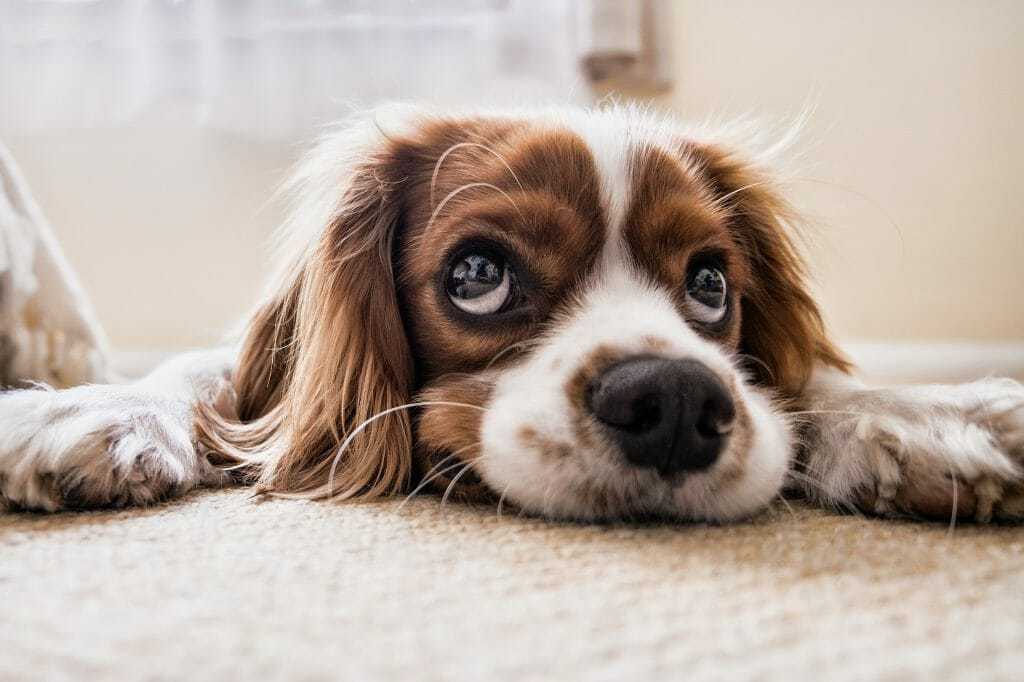 A lowered head in a submissive pose

This is a submissive action, and it’s normal in a healthy relationship between pet and owner.

It’s easy to interpret this as sadness, but that’s often not the case. Deferential signaling is normal for dogs, and they’re usually happy to be the focus of attention.

Ears Up (and Down) 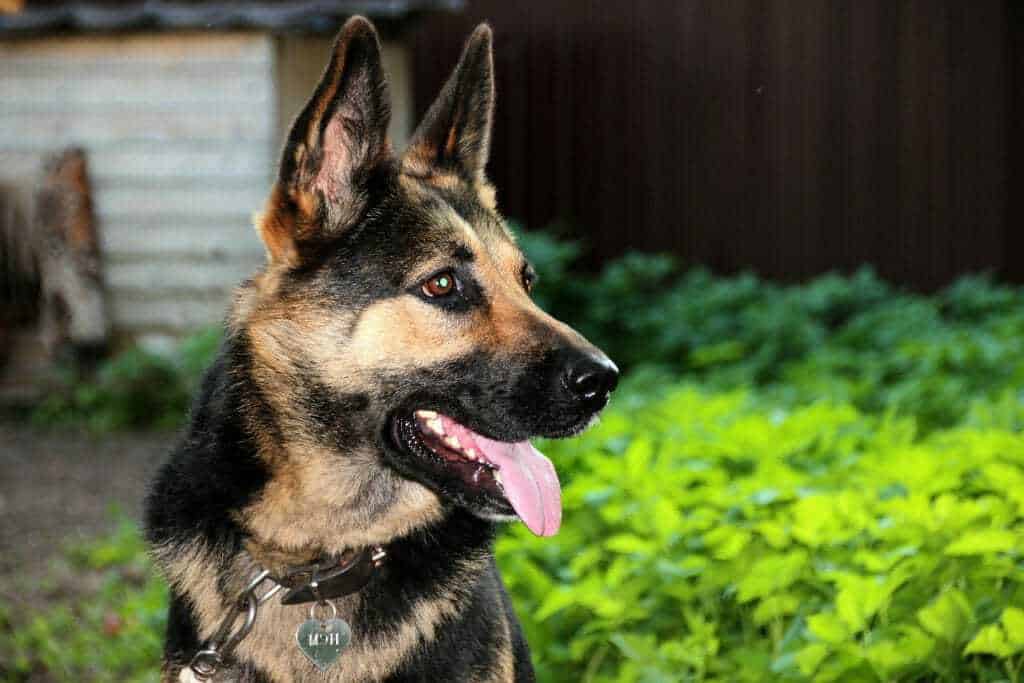 This German Shepherd is focused on something in the distance, and he’s listening intently

The position of your dog’s ears is also a good guide for understanding their mood.

For example, many dogs will peel their ears back while they lick your face, to show that they mean you no harm. Check their mouth and eyes to get a better picture of how they’re feeling.

Flat ears are typically submissive, but it could also be fear if they’re pinned back tightly.

Ears up or forward means that your dog is aware and alert. They may want to play, or they might be looking for a few extra strokes.

A relaxed, neutral position means the dog is at ease, such as when they’re resting. 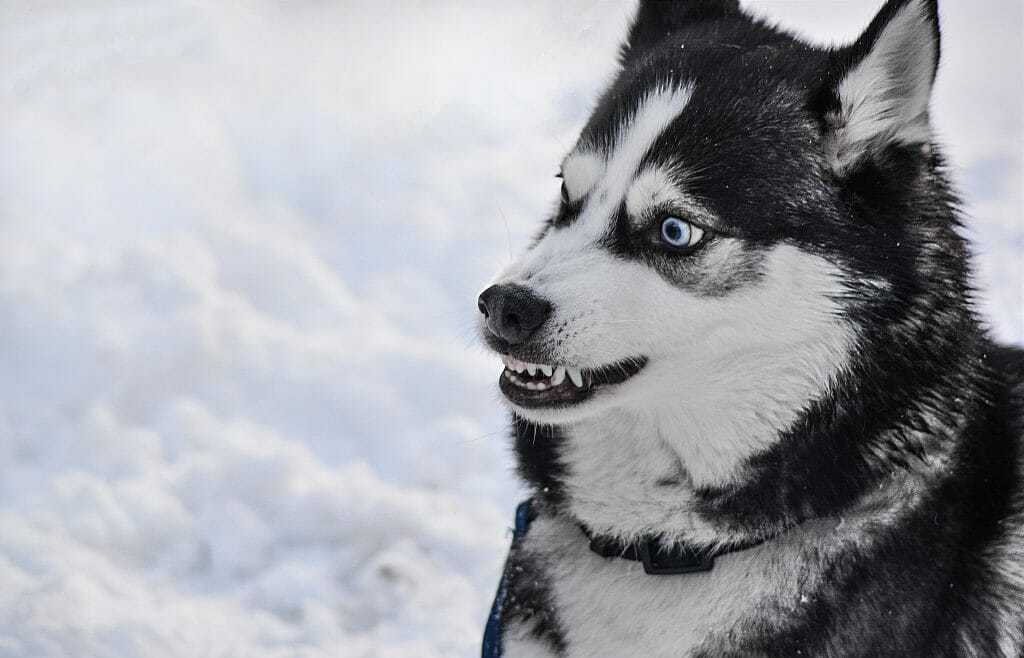 This eye/teeth combo will make most people back off

‘Whale eye’ is a term used to specifically describe when the whites of a dog’s eyes are clearly visible. The sclera can sometimes appear normally, but it’ll often be mixed with other signs of agitation.

As a dog exhibiting whale eye could be fearful or anxious, it’s often best to leave them to relax, or at least until you can identify the source of their agitation.

A hard stare can be tough to deal with, especially if you’re not confident around dogs in the first place. Also known as ‘hard eye’, the fixed stare is different to whale eye, but the meaning is the same. The dog isn’t happy with what they’re looking at.

They may be frozen in place, and it sometimes only lasts for a brief moment as a warning.

However, staring isn’t necessarily an aggressive action. My dog sometimes will look at me for ages if he wants attention, and trainers actively encourage their dogs to stare to understand commands.

My staffie often beams at me with his tongue out, wagging his tail every time we lock eyes. Research suggests that staring into dogs eyes “activates the same hormonal response that bonds us to human infants.”

Needless to say, a hard stare is easy to identify, and you should disengage if you’re unsure. 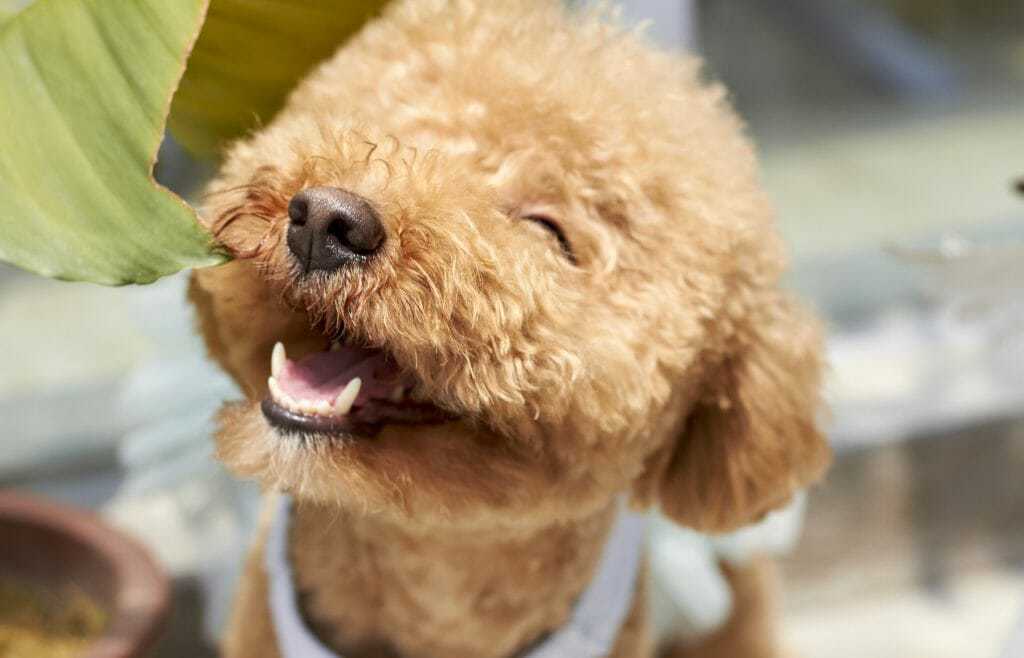 A smiling, calm, happy dog in the sun

It’s generally easy to tell if your dog is happy, especially after you’ve spent a decent amount of time with them. You’ll get to know their facial tics and tells, and they do their best to understand yours.

This is because of the relationship between humans and canines and genetic domestication over time. We’ve evolved to understand a dog’s face, and they’ve evolved to have distinct features and the capability to smile.

It could be a submissive grin, but some dog’s will smile naturally when they’re relaxed and happy.

For new animals, it’s worth factoring in body language, as dog’s will use their entire body to get the message across.

Looking Out For Anxiety 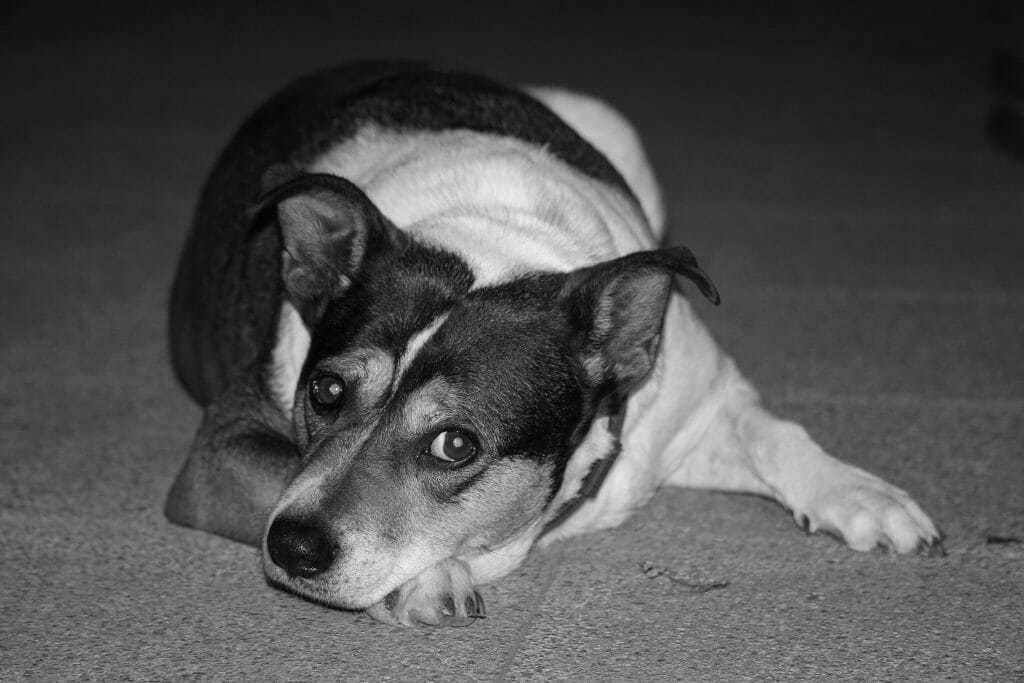 Is this dog anxious, or is he bored?

Anxiety can crop up in a number of ways, from your dog licking their lips frequently to not wanting to play or eat. Most examples won’t be that extreme, but you can use a mix of behaviours and facial expressions we’ve discussed to ensure that your pet is okay.

Although we do have a good understanding of what dogs want, it’s easy to misdiagnose your pet with anxiety. They could just be bored or tired, so it’s important to understand the root cause of why they’re acting the way they are. 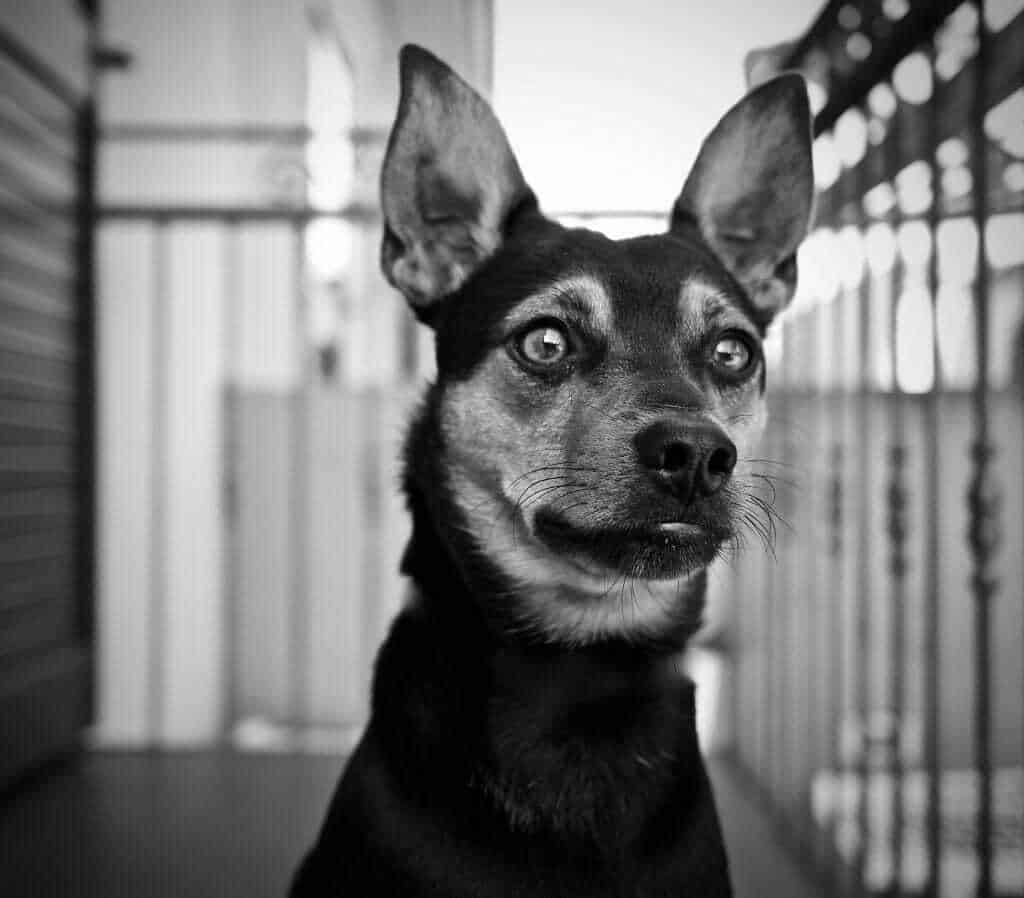 For those without much experience, it’s sometimes hard to tell if a dog is curious, or furious with you.

When my dog was a puppy, he had a habit of running over to strangers unexpectedly in an attempt to say hello and lick their faces. It was unnerving for the vast majority of bystanders, who saw him coming with his mouth wide open.

As we’ve mentioned, studying the ears, eyes and mouth of a dog will make it easier to understand their intentions, although some dogs are just as unpredictable as humans.

For the most part, dogs just want to play, and they’re generally open to making new friends.

You’ll have to be careful if you spot a dog with a tightly closed mouth. It’s generally a warning sign for most animals, and they’re likely to feel tense at the very least. We’ve already discussed the commissures, but a tight V shape is nearly always a sign of discomfort or stress.

It’s similar to some humans, who clench their jaw when they begin to lose their cool. If the dog’s lip is slack there’s no need to worry, but it’s not advisable to approach if you don’t know the animal.

A curled lip is generally used for disgust with humans, but dogs use it as a sign that they want to be left alone. 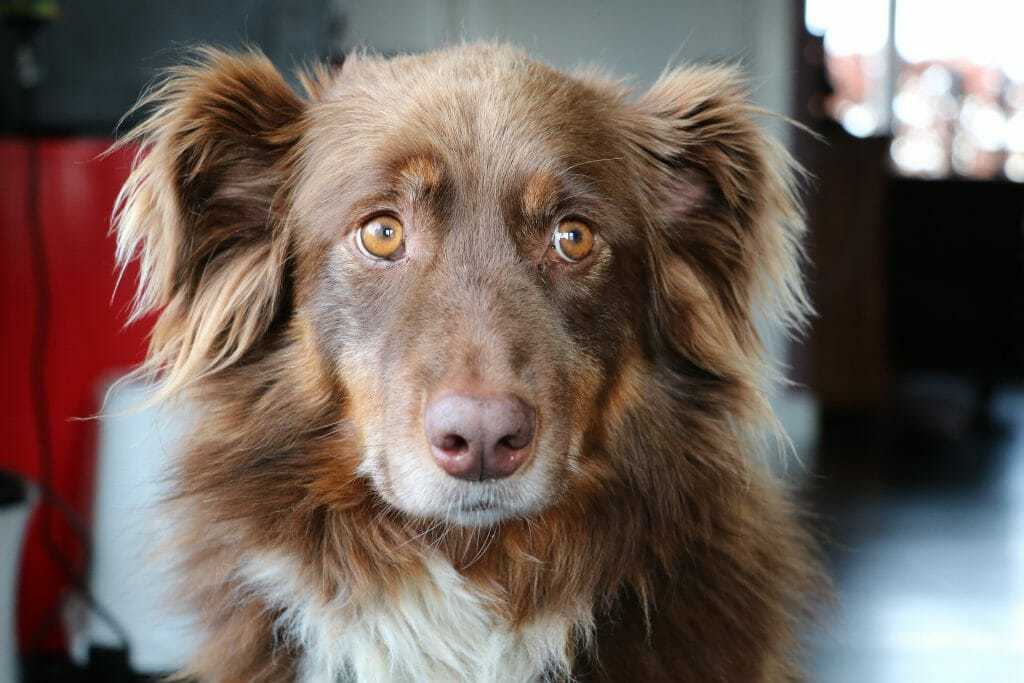 Most owners will be able to recognise ‘that guilty look’ on the face of their dog after they’ve done something wrong.

However, this doesn’t mean that the dog actually feels guilty about their actions. Your pet is simply trying to appease you with behaviour that has worked in the past, and submissiveness is often the best way to get an annoyed human to relax.

They may follow rules you’ve enforced through training and time, but they won’t always understand why they’re doing so.

For example, my dog knows not to eat rubbish as he’ll get in trouble, but he doesn’t get that I’m worried about him choking or having an upset stomach afterwards. As far as he’s concerned, I’m stopping him from having an extra snack. 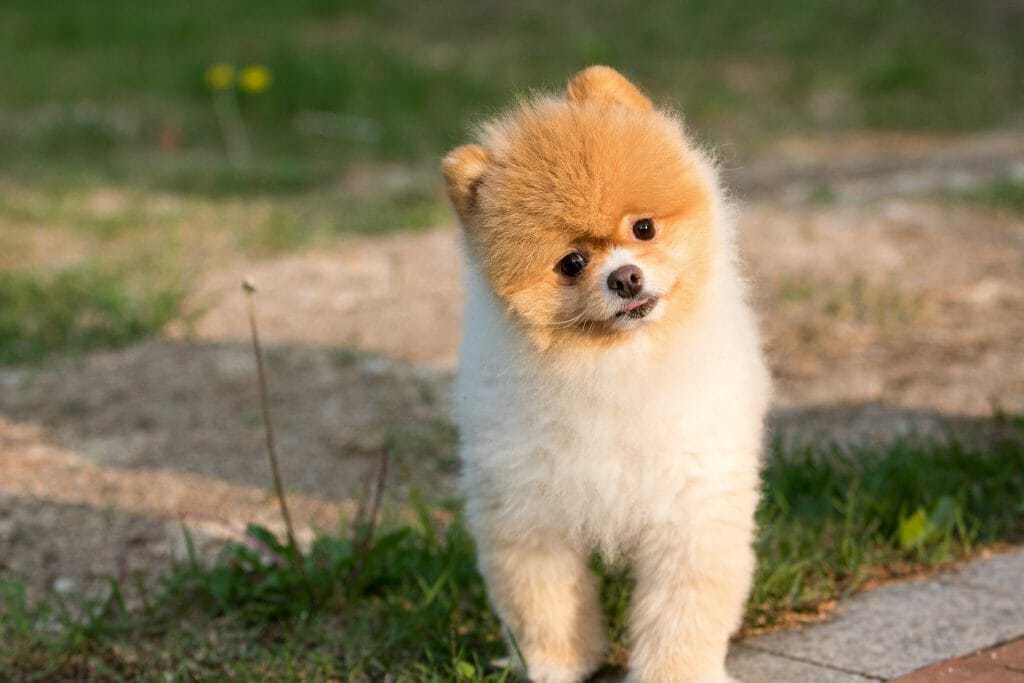 A combination of tilted head and raised eyebrows

Lastly, we have head tiling and eyebrow raising.

Elevation of the eyebrows indicates surprise, and some dogs will raise one eyebrow instead of both.

This is often accompanied by a widening of the eyes, just like with humans. They will sometimes do it to show they’ve seen something of interest.

Head tilting is a gesture used to convey curiosity. For example, a dog will often be completely focused on you or the source of a noise, hoping to identify what’s going on.

They’ll also do it to show that they’re listening to you. It’s a relaxed pose, and some pets tilt their head frequently because they know their owners like it.

Reading your dog’s expressions is never an exact science, but it does get easier over time.

While some tells are more subtle than others, it’s not unreasonable for owners to come to understand a dog’s idiosyncrasies.

Every dog is different, but most will make the effort to let you know how they’re feeling with a range of different facial expressions. Smart dogs also know when they’re being cute, so be careful not to fall prey to giving them whatever they want just because they gave you puppy dog eyes.

Dogs will probably continue to evolve to match our needs, and mutual understanding is key to a healthy relationship with your pet. 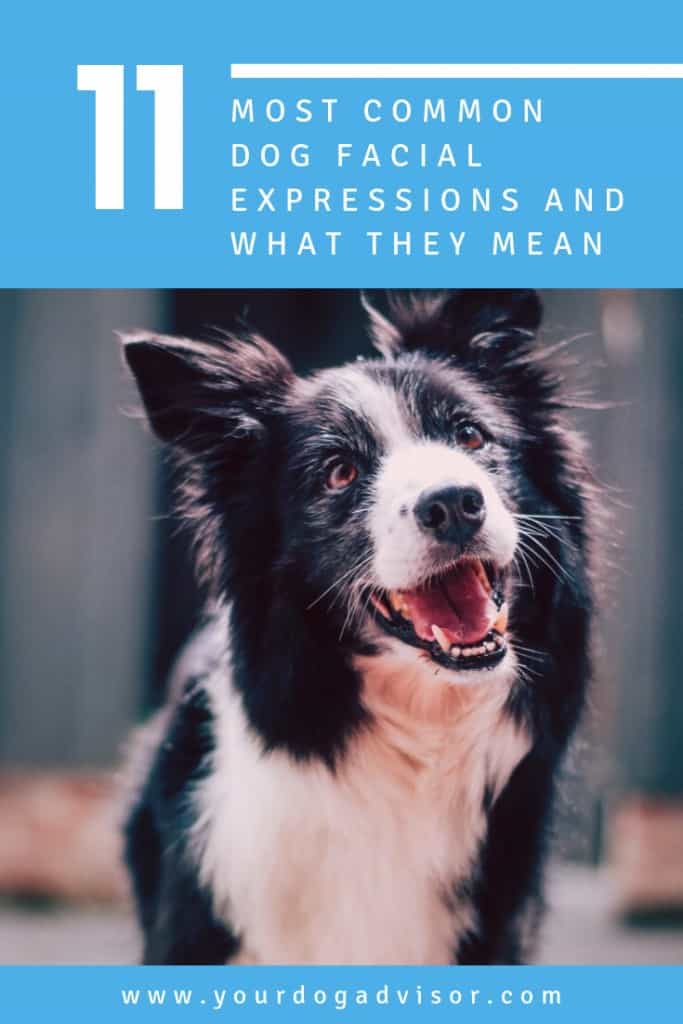