Cairn Terriers are small, scrappy, fun-loving little dogs that make great pets. In fact, The Cairn Terrier Club in the UK calls them “the best little pal in the world.” There are many things that make Cairns great dogs,  but before you decide to bring one home, here are 11 facts that will help you decide if they’re the right breed for you.

1. They Date Back Centuries 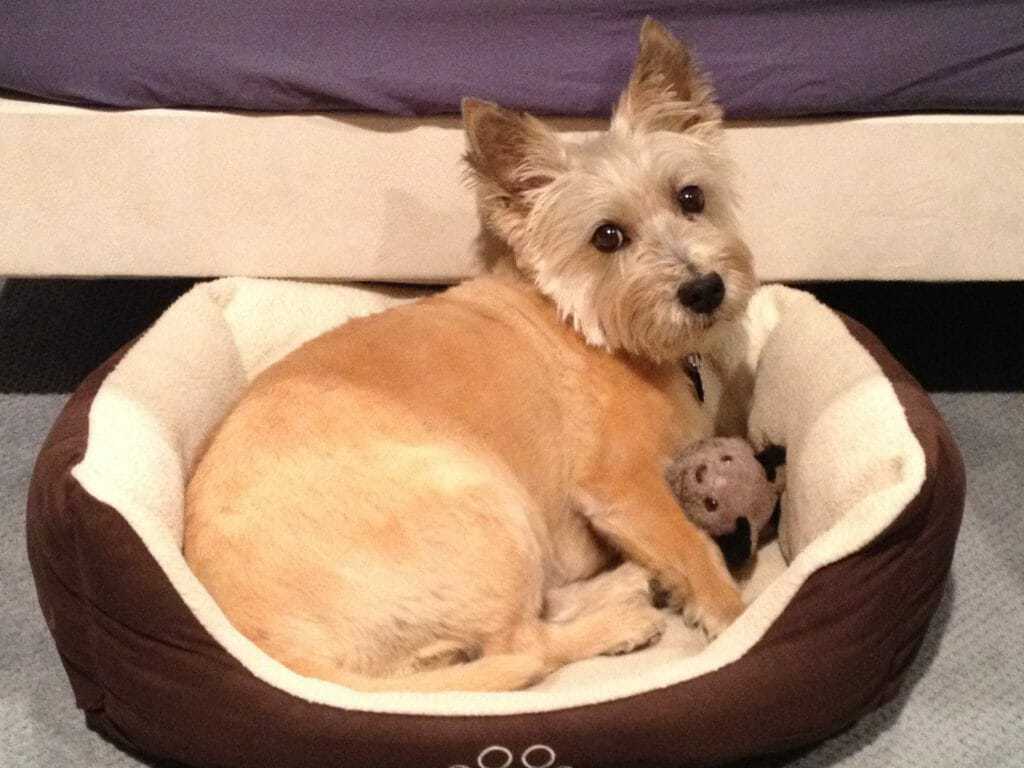 The history of the Cairn Terrier is tangled up with the history of a number of other working terrier breeds from Scotland. For a long time, the breeds were lumped together as Scotch terriers, but according to the America Kennel Club, Cairn-type terriers lived on the Isle of Skye in the Western Highlands from at least the 1600s. However, it wasn’t until 1887 that the name Cairn Terrier actually appeared in print.

Over the years, the Scotch terriers developed differences based on the work they did and this led to differences in appearance that resulted in the breed being separated into Scottish Terriers, West Highland White Terriers, and Skye Terriers. Cairn Terriers were the last to be named, but the Foundation of the Cairn Terrier Club of America notes that the breed is closest in appearance to the original Scotch Terriers. Cairns were officially recognized by the AKC in 1913.

Of the Scotch terriers, Cairns are the only ones that aren’t named after a place. Actually they’re named after a pile of rocks. In Scotland, stacks of stones were used to mark boundaries or grave sites. They were referred to as “cairns.” In the Scottish Highlands, rodents and other vermin would hide in the cairns. Cairn Terriers would find and root out the rats, foxes, otters, and other unwanted animals from the cairns, providing an invaluable service to the farmers in the area. In fact, the little dogs were so hardy, courageous, intelligent, and persistent that they’d do their work regardless of the temperature or other conditions, helping to ensure their farm persisted. 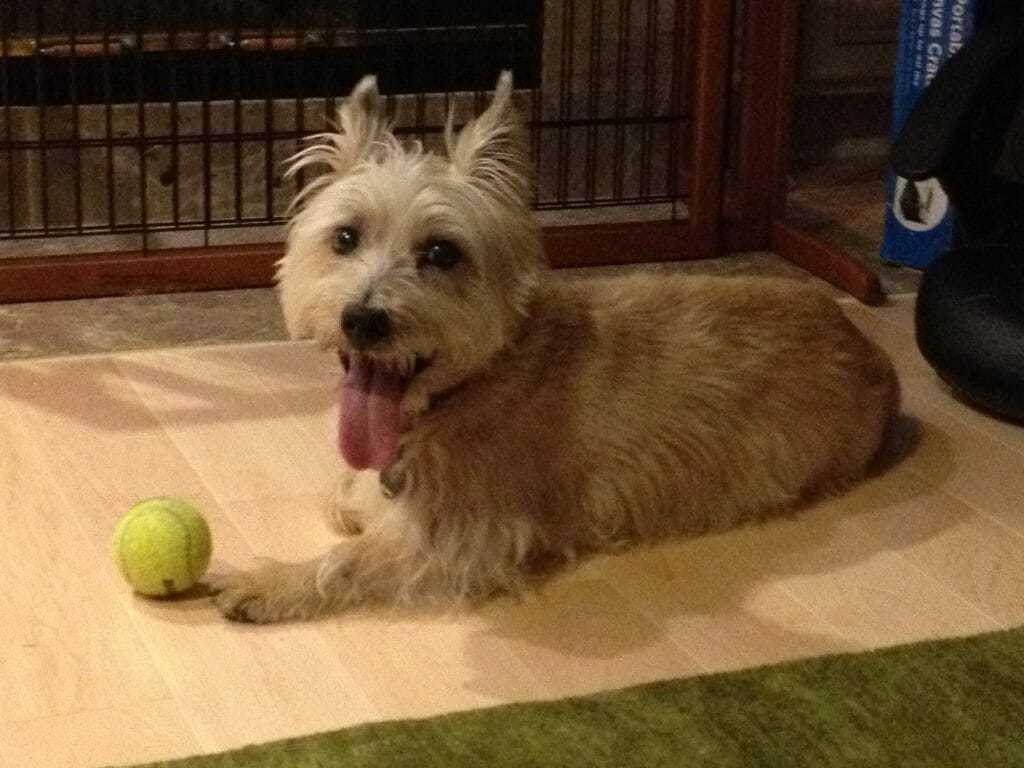 That small size can make it seem like Cairns would make good lap dogs, but due to their history as working dogs that’s not the case. While Cairns are good-natured and friendly, they’re also busy and independent. So although they make excellent companions, they won’t be clingy or sit still for long. For example, our Cairn Terrier Solomon would let me pet him for a few minutes, but when he’d had enough of my attention, he’d move away from me to entertain himself elsewhere.

4. They Can Be Any Color But White 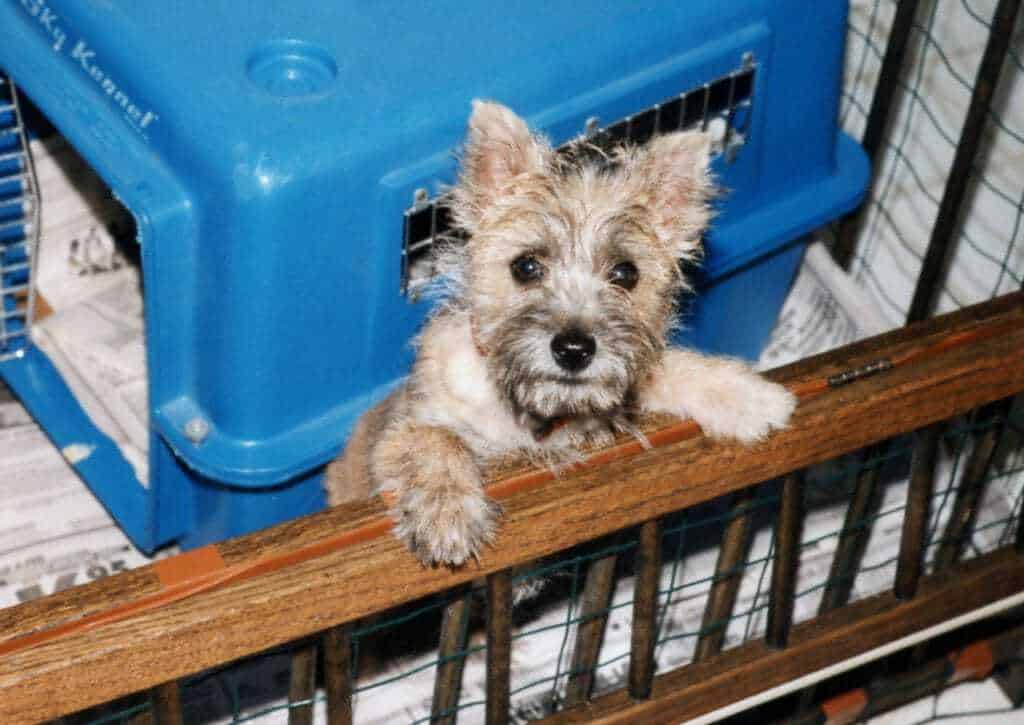 Riggles as a puppy had a fairly light coat.

Many people confuse Cairn Terriers and West Highland White Terriers, but there’s a tell-tale difference: as their name suggests, West Highland White Terriers are always white, meanwhile Cairns can be any color except white. The Cairn Terrier Club of Northern California lists possible Cairn coat colors including cream, wheaton, red, grey, or black. Cairn coats typically vary in color with darker patches on the ears, muzzle, and tip of the tail. They can also change colors from light to dark or vice versa throughout their lives, especially as they grow from puppies into adult dogs. When my dog Riggles was a puppy, his coat was much lighter, but as an adult his coat grew a lot darker, especially on his head and feet. 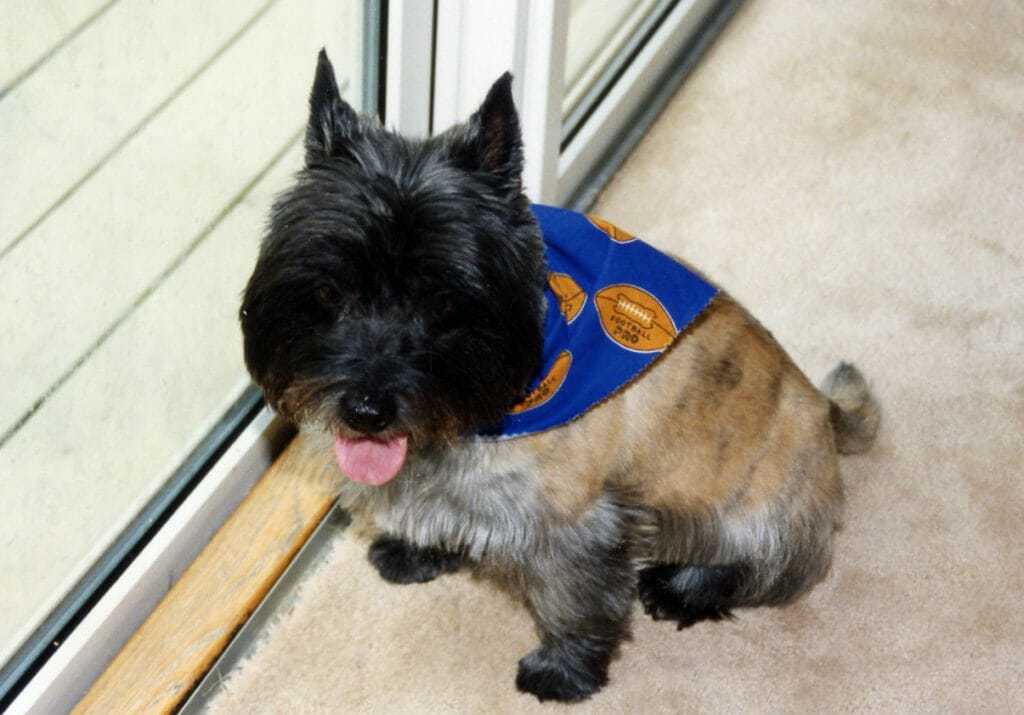 As an adult, Riggles’ coat got much darker.

Cairns have a double coat consisting of a straight, rough, weather-resistant outer coat and a soft undercoat. As a result, the breed’s grooming requirements are minimal. Weekly brushing will suffice to keep up appearances. And every few months Cairns should be hand stripped to maintain its double-coat. Fortunately, the double coat keeps Cairns from shedding too much.

5. They’re Loyal But Have a Mind of Their Own

Cairns are very loyal and loving to their families.  They enjoy being around their people and can be sweet, clever, and funny. However, they also have a mind of their own, and unless they understand that you’re the boss, they may walk all over you. That doesn’t mean you should be harsh or use negative reinforcement to establish your dominance, but you do need to be firm and consistent with the Cairn’s discipline.

Even well-trained Cairns shouldn’t be let off leash under any circumstances. Their natural curiosity will send them running off in all directions and you’ll never catch them until they’re good and ready.

That said, as the Cairn Terrier Club of America observes, each Cairn has their own distinct personality. I have had three Cairn Terriers throughout my life, and while all three shared the basic Cairn traits I’ve mentioned here, each one also had their own unique characteristics. Razzle was sensitive and sympathetic, Riggles was outgoing and enthusiastic, and Solomon was stubborn and charismatic. 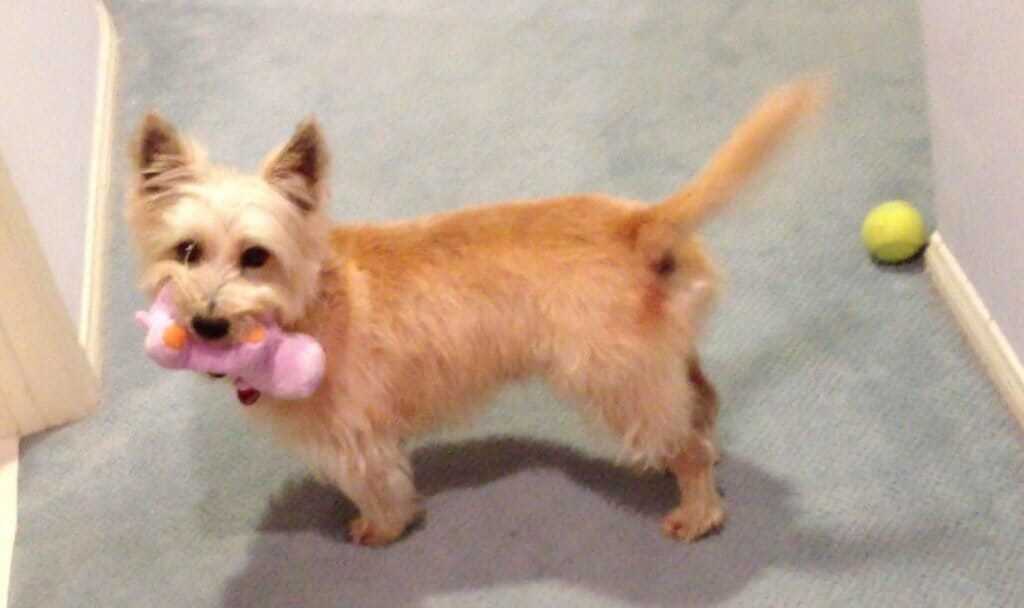 While Cairns can live in many situations, including apartments, they must have at least one on-leash outing a day. They have a strong prey drive and on walks will bark at and run after any rodent or small animal they see. They will also bark inside if they don’t get enough exercise and aren’t properly trained.

In addition, many Cairns like to dig. According to the AKC, they even have unusual feet that are specifically made for digging. Cairns’ front paws are better-padded and larger than their back paws. It’s an adaptation that worked well when they were pursuing vermin in the Highlands of Scotland but could become a big problem in your garden today.

Cairn Terriers have a long life span. On average they’re expected to live between 13 and 15 years. Two of my three Cairns passed away at 13, while Solomon lived to the ripe old age of 16. With regular check ups with the vet and diligent care as they age, Cairns can continue to be active and energetic well into their teens. This was certainly the case for Solomon. He seemed like a much younger dog until the last two years or so of his life.

Cairns are also relatively healthy. As the Cairn Terrier Club of Northern California observes, given the breed’s longevity, large gene pool, and minimal genetic manipulation, most Cairns don’t suffer from congenital diseases. However, the Cairn is prone to some issues including allergies, cataracts, heart defects, luxated patella, and seizures and epilepsy. According to the Cairn Terrier Club of America these issues occur only occasionally. Any reputable breeder should test their dogs for known conditions so you’re aware of any potential problems before you purchase a puppy.

Cairns are smart, which makes it fairly easy for them to pick up on training. They’re also stubborn and prone to test limits, so obedience training is a must for any puppy. And there are certain instinctive behaviors that are all but impossible to train out of Cairns, like chasing rodents and digging.

My most recent Cairn, Solomon, was adopted when he was 11 years old. He was very well trained by his original family and knew a plethora of commands. However, there were many times when he’d try to challenge our authority by not coming when he was called or ignoring our commands unless there was a tasty treat in it for him. We found his behavior endearing and enjoyed seeing him assert himself and express his opinions. If you wouldn’t find such disobedience charming, Cairns may not be the right fit for you. If you’re willing to be positive and consistent with their training though, Cairns could be a good fit.

Cairns are incredibly friendly dogs and tend to love every person they meet. They’re even good with kids, although young children must understand how to properly treat the dog to avoid conflict. Still, Cairns are hardy and solidly built so they won’t be overly concerned with the odd physical mishap, like a stepped-on foot. I grew up with Cairn Terriers and know from experience they’re a lot of fun to run around with as a child.

On the other hand, Cairns aren’t always generous towards other animals. If they’re socialized properly they will adapt to other dogs and even cats living in their household. They may not be as tolerant towards other animals outside of the house, though. For example, my family’s dog, Riggles, enjoyed meeting other dogs almost as much as he did people. If he saw a cat, squirrel, chipmunk, or pretty much any other animal however, watch out! He’d bark like crazy and do his best to chase after them.

10. The Most Famous Cairn Starred in The Wizard of Oz

Many people are more familiar with Cairn Terriers than they think because one of the most famous movie dogs of all time was a Cairn: Toto from the 1939 movie The Wizard of Oz. The dog’s real name was Terry and in reality he was a she! Because of their association with The Wizard of Oz, Cairns are sometimes referred to as “Toto dogs.”

Cairns have appeared in numerous other TV shows and movies, including I Love Lucy, Mad About You, and Mr. Robot.

11. There Are Many Cairn-Specific Rescue Groups

If you’re interested in adding a Cairn Terrier to your family, instead of going to a breeder, another option is to adopt a dog through the numerous Cairn-specific rescues that exist. While you may have to wait a little longer to get a dog this way, you’ll be helping a Cairn who’s truly in need. There are many region-specific rescues such as that of the Cairn Terrier Club of Southern California. In addition, Col. Potter Cairn Rescue Network places dogs across the United States.

You also may find a purebred Cairn or Cairn mix at a local shelter or general rescue. However, if you have your heart set on a Cairn, be very careful with any organization that doesn’t specifically serve Cairn Terriers and doesn’t have any medical papers or DNA testing on the dog they identify as a Cairn. There are many dogs that are labeled Cairns but may not be. For example, my dog Jitsu was originally advertised as a pure-bred Cairn Terrier. Having grown up with the breed, I knew on sight that he was no such thing (we adopted him anyway and he’s a wonderful dog, but temperament-wise quite different from a Cairn). So if you’re searching for a Cairn at non-breed-specific rescues be skeptical about a dog that’s designated a purebred Cairn. 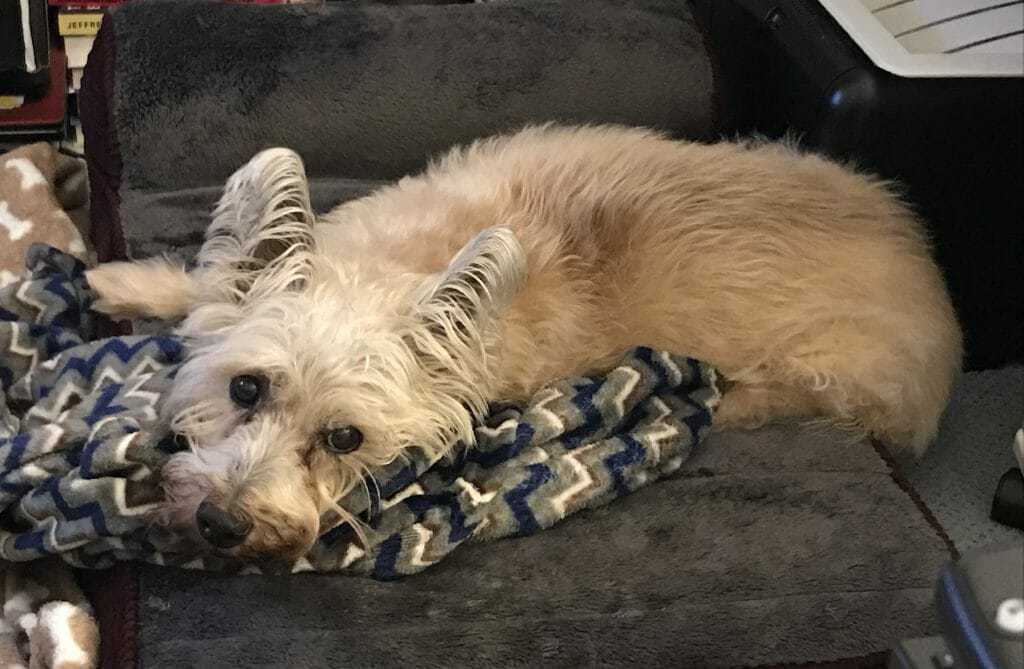 Solomon, a pure-bred Cairn Terrier, was adopted from a rescue.

Cairn Terriers are happy, independent, and lovable companions, that will thrive in the right home. Now that you know all about them, you can make an educated decision about whether they’re a good option for you and your family. 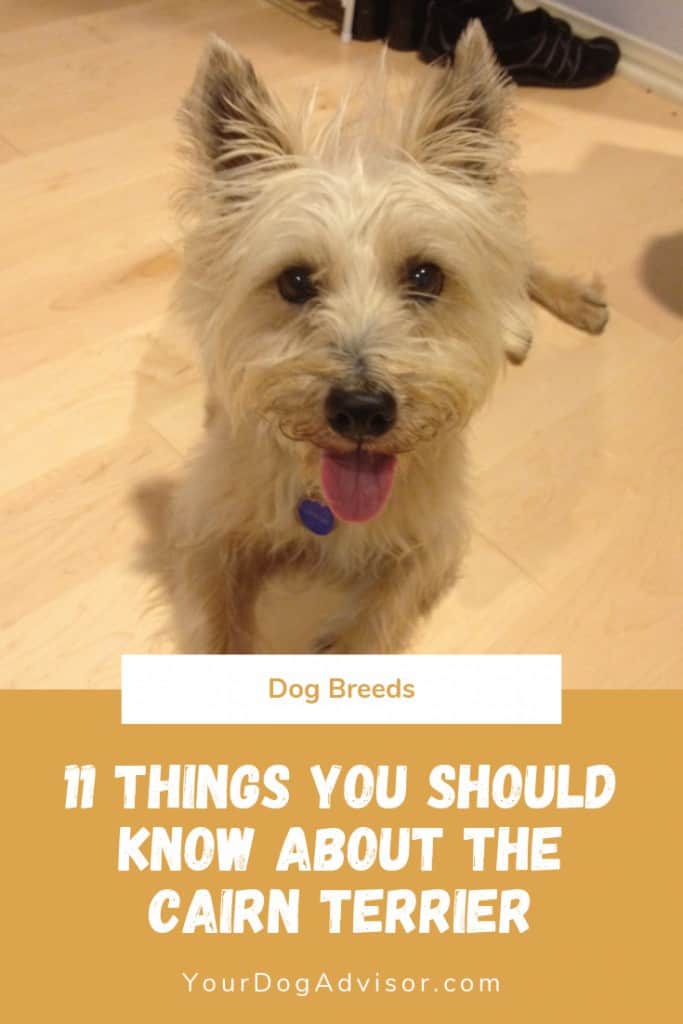