Norwich Terriers are one of the lesser known terrier breeds.  If you do meet a Norwich Terrier, you’ll find that these spunky and energetic dogs make quite an impression. Small, playful, and brimming with personality, Norwiches make for great pets. Before bringing a Norwich into your home, though, there are several things you should know about them.

1. History of the Norwich Terrier

Norwich Terriers were originally bred in the late 1800s to hunt rats in East Anglia, England. Norwich were bred from a mix of other small terrier breeds. Throughout their history, they’ve been known by multiple names including Turmpington, Jones, and Cantab Terriers.

The first Norwich didn’t arrive in America until 1914, when a dog named Willum was brought to Philadelphia. They were officially recognized by the American Kennel Club in 1936. 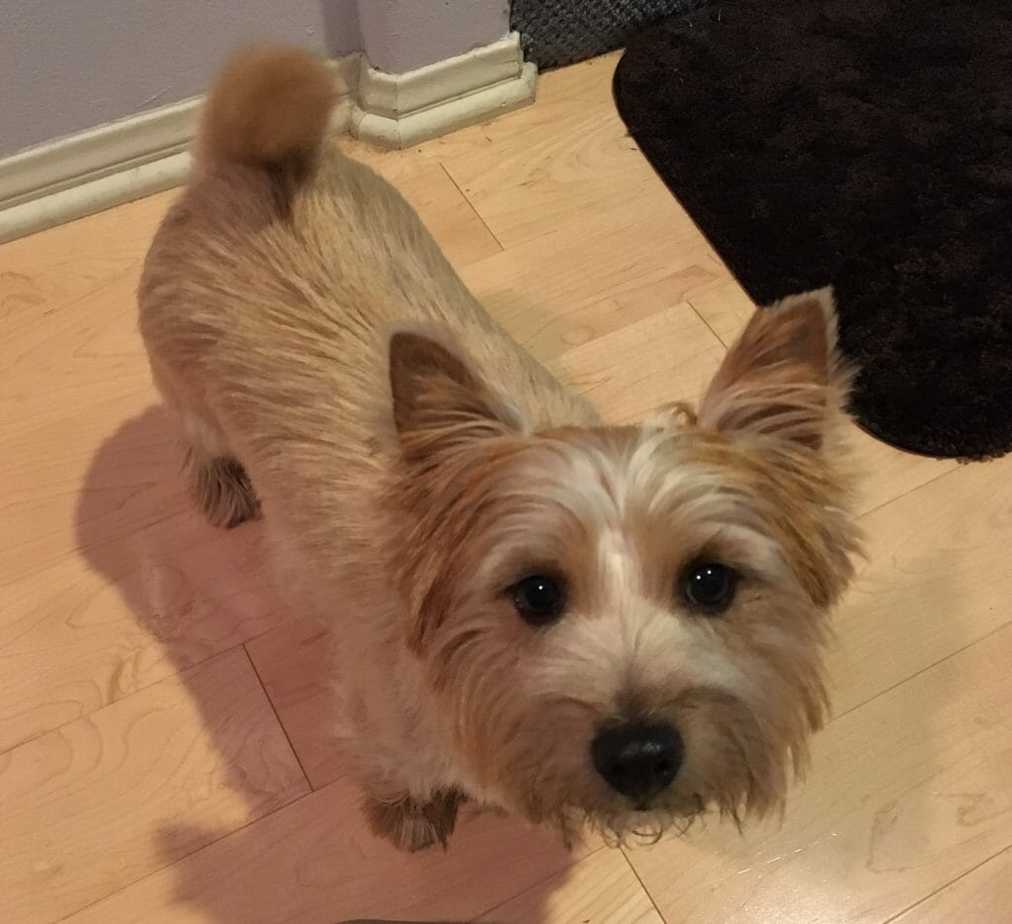 According to the AKC, Norwich Terriers should be 10 inches tall at the shoulder and weigh about 12 pounds. They’re stocky dogs with a wide body, short legs, a foxy face, and pointy, or prick, ears. Despite AKC’s breed standards for the Norwich, you’ll find the height and weight of these dogs can vary. For example, my Norwich Terrier, Cordelia (or Cordy for short), is about 16 pounds.

You should also be aware that Norwich are extremely food motivated and can be prone to becoming overweight. As a result, it’s important to watch how many calories they eat and not provide them with an excessive number of treats on a daily basis, even though they’ll be happy to eat anything you give to them. The battle of the bulge has been a struggle for Cordy since we adopted her when she was 3. Despite eating diet food and having her intake well-monitored, she puts on weight easily if we aren’t careful. And she has a much easier time adding pounds than taking them off!

3. They Have a Terrier Personality 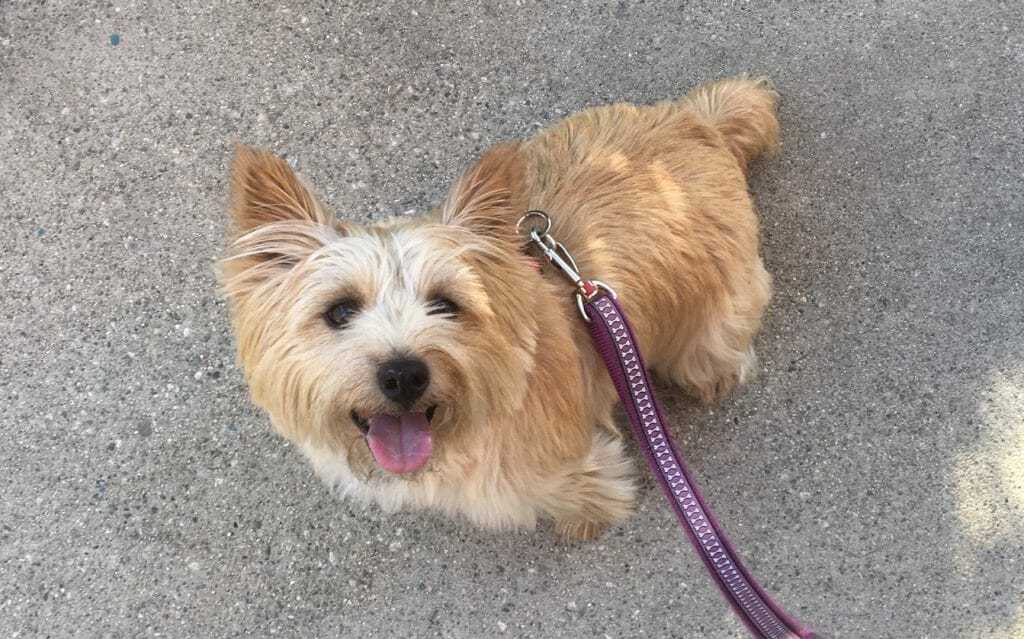 Like many terriers, Norwich are alert, curious, and assertive. They want to please you but they can also be stubborn about what they want — especially if it involves food. Even though they’re little, a Norwich will never acknowledge it. They have big personalities and they’re confident, brave, and busy, happy to chase prey or explore new situations.

Fortunately Norwich are also affectionate and like being around people. They won’t necessarily be interested in being your lapdog, but they’re good companions who’ll want to stick close to you. Cordy, for example, doesn’t always enjoy being picked up, but she loves attention, especially if a belly rub is involved. She likes to lie on the couch with the whole family, and during the day, she’ll periodically bark to alert us when other dogs are walking by or a squirrel has run across the nearby yard.

4. Norwich and Norfolk Terriers Used to Be Considered One Breed 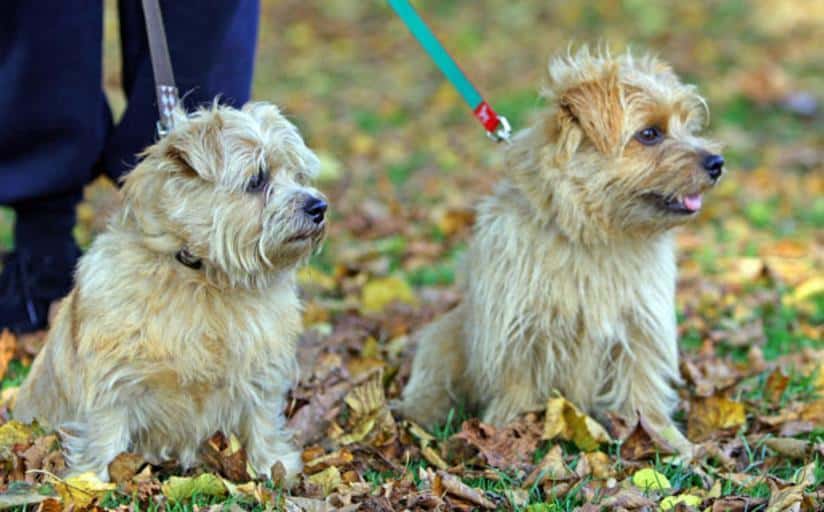 Norfolk Terriers have floppy ears like the dogs shown in this photo, while Norwich have pointy ears. 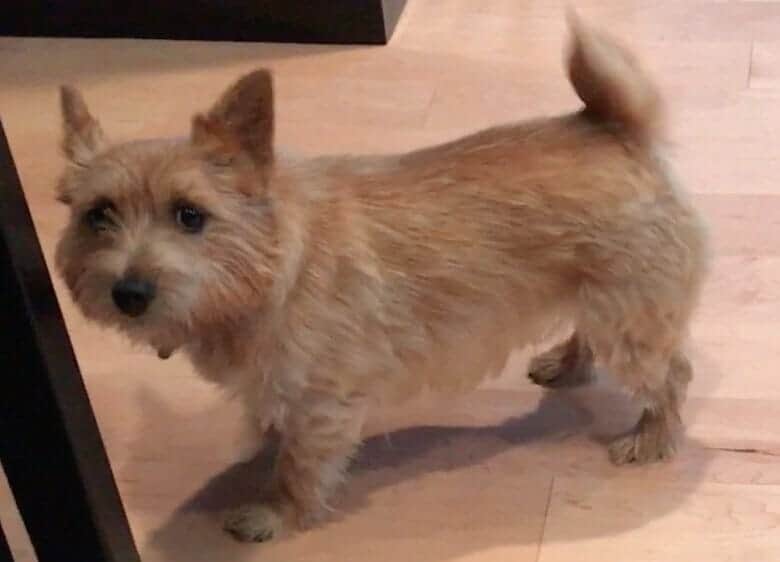 Many Norwich Terriers have short, stubby tails, but they weren’t born that way. Norwich Terrier tails are typically docked, or amputated, shortly after they’re born.

The practice comes from the Norwich’s history as a working dog. When Norwich would go after rats or other vermin, people would pull them out of the burrows by the tail. If the end of a long tail was pulled though, the tail would often break. So, docking a Norwich’s tail to a medium length provided enough room for a person to grip the dog’s tail without worries of breaking it.

Today, the procedure is purely cosmetic. However, a medium docked tail is still part of the AKC’s official breed standard for the Norwich Terrier. As a result, many Norwich breeders dock their puppies’ tails as a matter of course. Despite the AKC’s continued endorsement, tail docking is banned in some countries and the American Veterinary Medical Association has come out against the practice of tail docking for cosmetic purposes.

6. The Norwich Has a Double Coat

The Norwich has a double coat that consists of a wiry, straight topcoat and a soft undercoat. The top coat is nearly weatherproof if it’s properly cared for. You should brush a Norwich weekly, but outside of that, their grooming needs are minimal.

In order to maintain a Norwich’s double coat, it needs to be stripped approximately twice a year. Stripping is the process of pulling out the dead hair in the topcoat and can be done with a tool or even by hand. It’s a time consuming process however, so it may be best to find a groomer who can do it.

Of course, a Norwich can also get a haircut instead, but you’ll find this makes their coat lighter in color and softer to the touch. It also eliminates some of a Norwich coat’s protective function and creates the need for more frequent bathing. You can find Norwich in four different colors: black and tan, grizzle (a mix of black and red hair with some white), red, and wheaton.

7. Breeding is a Challenge

Norwich Terriers are a challenge to breed, which is part of the reason they aren’t more popular. They have small litters with an average of two to three puppies and Caesarian sections are often required. Plus, it can be difficult to get a Norwich to conceive in the first place. And even when puppies are born, they may not be healthy enough to live without some intervention like tube-feeding. Sadly, newborn pups have a high mortality rate.

If you’re interested in getting a Norwich puppy, it’s important to find a reputable breeder and have the patience to wait for a dog to become available. It can take a while! It’s also important to know that because of the scarcity of the breed, puppies can be expensive.

The Norwich Terrier Club of America also warns that because the demand for Norwich is greater than the supply, some disreputable breeders have taken to passing off Cairn Terriers or Cairn-Norwich mixes as purebred Norwich Terriers. This scam is mainly happening over the internet. Cairn Terriers are great dogs but aren’t the same as Norwich, so puppy buyers should beware!

If you’d like to get a Norwich and aren’t invested in getting a puppy, it can also be worthwhile to look for an adult Norwich at shelters, rescues, and by calling breeders. We found Cordy after calling several breeders to find out if they knew of any available adult dogs. We were very lucky to learn about Cordy, whose original owner was looking to re-home her.

8. They Suffer from Upper Airway Syndrome

Norwich are a healthy breed as a general rule. However, they’re prone to certain issues. One of the most concerning and least understood is upper airway syndrome. Norwich are often raspy breathers, and recently research has found that upper airway syndrome is to blame. Upper airway syndrome impacts the voicebox, or larynx, and causes respiratory issues. Symptoms can vary from rough breathing to exercise intolerance, distress in the heat, and even death if the condition is severe and goes untreated.

Studies are being done to better understand upper airway syndrome in Norwich. Research reported in PLOS Genetics in May 2019, found that Norwich that have the condition share a specific gene variant, which means there’s a genetic component to the condition. As a result,  even dogs without symptoms may carry the genes that cause it, but breeding has the potential to weed it out of the Norwich genetic pool in the future.

Norwich can also suffer from neurological disorders like epilepsy and degenerative myelopathy, hip dysplasia, and patellar luxation. Good breeders will screen their dogs for these conditions so you should know if there is any potential for problems.

9. They Need to Be Leashed Outdoors

Norwiches were bred to be hunters, and even though the average pet Norwich won’t serve that function today, they still have a strong prey drive. They will try to go after rodents and small birds by lunging at them and barking wildly. As a result, unless they’re in a securely fenced-in yard, you should never let a Norwich off-leash. Electronic fences that are buried underground aren’t a good choice either. Norwiches are so driven to chase after prey animals that they’ll ignore the shock delivered by the fence and run out of the yard before you know it.

Cordy exemplifies this breed characteristic. If a small rodent or bird is in her sightline she barks and charges with gusto. If she were ever off-leash she would quickly lose herself in the chase. As long as she’s leashed though, it’s fun to watch her do her “job,” although the squirrels and birds she barks at never seem quite as intimidated by her as she’d like!

In order to stay healthy and happy, Norwich need to get regular exercise. They should get at least one or two 15 minute walks a day or engage in regular play sessions. If you take them out in very hot weather and they exercise too long or too vigorously, they can get overwhelmed by the heat. As long as a Norwich’s exercise requirements are met, they don’t need a lot of space and can be happy living in an apartment.

Many Norwich excel at competitive events like agility, earthdog, and obedience too.

Norwich make great family pets. They’re good with children, especially if they grow up around them. Adult dogs who haven’t grown up around children may be more hesitant around younger kids however. These dogs would probably do better with older children. Since Norwich are sturdy little dogs, they can stand some rough-housing with younger children as long as they’re comfortable.

Norwich also embrace having another dog in the house with them. They can even get along with cats as long as they’ve been around them enough when they’re little. Given the Norwich’s instinct to hunt small animals though, if you like to keep pets like mice, guinea pigs, and hamsters in your home, a Norwich probably isn’t the right dog for you.

Cordy loves her doggie brother Jitsu. They have fun playing or lounging around together.

In sum, Norwich Terriers are adorable little dogs that are full of personality. Now that you know all about them, you should know if a Norwich will fit well in your home. 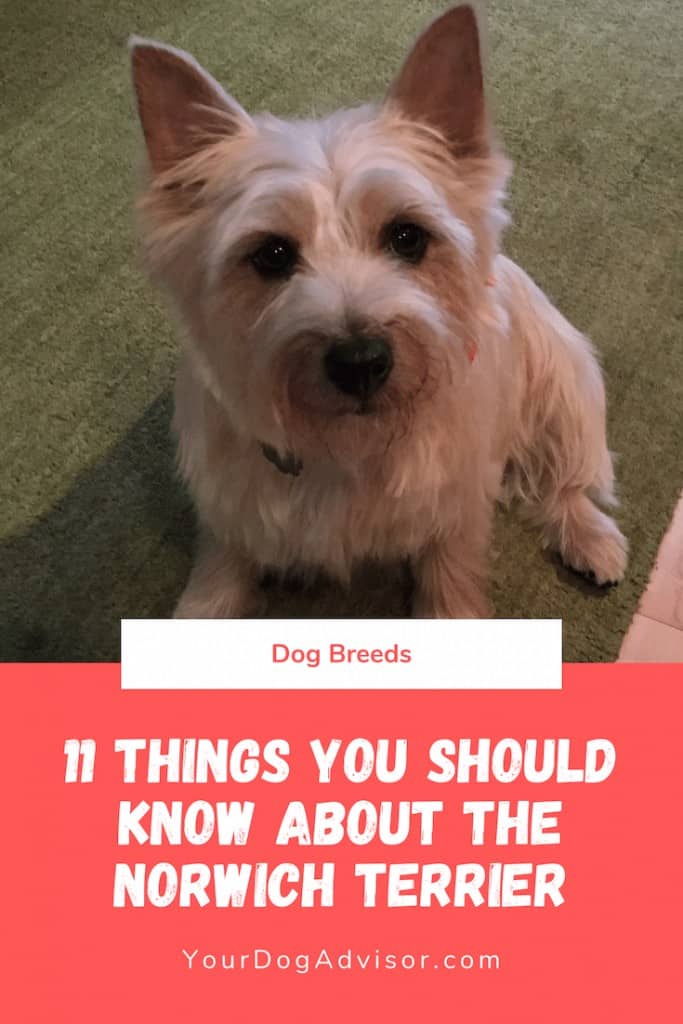