Rachael Ray is a household name for food — human food, that is. When I first saw that she’s behind a brand of dog food, too, I was intrigued. What made her dog food special? Why should I buy it for Eira, my Alaskan shepherd?

At first, I didn’t buy it. Eira seemed happy enough with her Kirkland dog food, so I stuck with that for a year. But here’s the thing: we live an hour from our nearest Costco, and dog food doesn’t ship to Alaska. Exhausted at the thought of doing a Costco run just for dog food, I decided to pick up some Rachael Ray Nutrish at the grocery store instead.

We ended up loving it. In fact, Eira lets me feed pieces of kibble to her like treats. Usually I have to use an actual treat to entice her to learn new tricks. But she’ll take her Rachael Ray dog food any day, any hour, any minute. It’s pretty amazing. I don’t think I’ve ever been able to use a dog’s regular old kibble in that way.

Dogs can be such picky eaters sometimes. My dog Bella didn’t seem to care for food as much as normal dogs. As a puppy, she was almost too skinny. I regularly added meat or treats to her food to try to help her like it. But even changing foods didn’t do much for Bella. She just didn’t have a ravenous appetite.

Eira is a little different. She definitely loves to eat and gets howly if you don’t feed her breakfast and supper right on time. But even though she enjoyed her Kirkland food, there were days she’d leave it for a while before finally coming back to eat it.

Not so with Nutrish. Eira adores the stuff. She scarfs it down within minutes after I pour it into her dish. If you have a picky dog, you may want to try Nutrish simply for the reason that my sometimes-picky dog never turns it down. Even when we left her with a boarding service for the first time, Eira ate her two Nutrish meals every day. She didn’t miss even one. 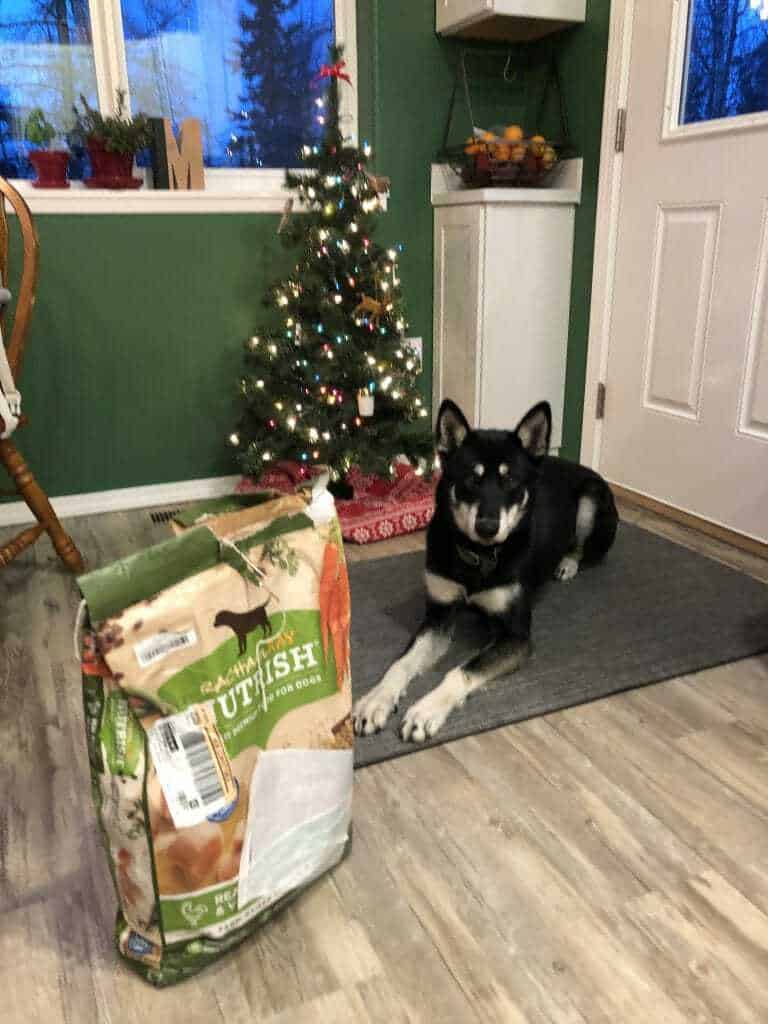 #2: The Ingredients Are Good for the Price

I had to check the ingredients list, of course, and see what was listed as the first six. In the Rachael Ray food that Eira loves, the first six ingredients are: chicken, chicken meal, soybean meal, whole ground corn, dried peas, and ground brown rice. For vegetables, the ingredients include alfalfa and dried carrots. And of course, the food contains all the vitamins and minerals a dog needs in order to thrive. 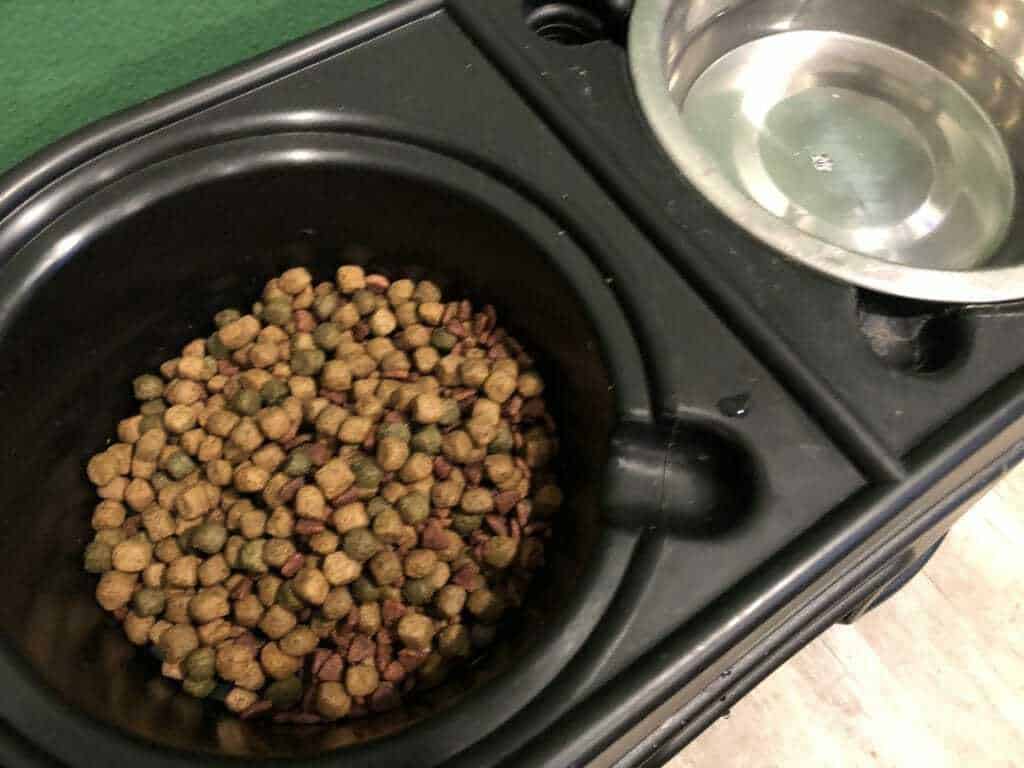 Eira’s Nutrish dry dog food in her elevated pet feeder. I love how the kibble has several different sizes and textures to it. I think that makes mealtime more satisfying for Eira.

If you know about dog food, you know that including fruits along with vegetables is ideal. But most dog foods that include fruits are pricier than those that don’t, and Rachael Ray’s dog food is very reasonably priced. That’s one reason why we love it.

#3: A Portion of All Proceeds Go to the Rachael Ray Foundation

I feel like I only recently started seeing Rachael Ray Nutrish food on the shelves, but apparently the company has been around for a while. Ray, a dedicated pet lover, started the brand in 2008 to provide dogs and cats with healthy food from natural sources, inspired by Rachael’s own cuisine.

In 2016, Ray started the Rachael Ray Foundation, which is funded entirely from proceeds of Nutrish sales. The foundation supports several of Ray’s causes, including childhood hunger and pet rescue missions. So basically, when you buy Nutrish from anywhere, you are helping rescue dogs and cats who don’t have homes. You’re also helping make sure kids everywhere don’t go hungry.

How amazing is that?

Was Nutrish Sued For Containing Pesticides?

Now that you know the three reasons I love Nutrish, it’s time to investigate its history as a brand. First, let’s look at recalls. As I’ve said before, a recall doesn’t always mean something is fundamentally wrong with a certain type of dog food. Salmonella infestations, for example, are common in things we humans eat all the time — lettuce, for example. Most of us know when these items get recalled and know to avoid lettuce until it hits the shelves healthy again.

The same is true for dog foods that put out salmonella recalls. Sometimes, things like that happen and they don’t mean the dog food is bad.

If the dog food is recalled for other things, though — say wires or pig bristles in its food — that’s a red flag.

In its entire 10+ years of existence, Nutrish has only been recalled once, in 2015, for potentially elevated levels of Vitamin D in several of its fish-based cat foods. Nutrish dog food has never been affected by a recall, but…

Nutrish experienced a class-action lawsuit in 2018, where the plaintiff, a man from New York, alleged that Nutrish included the herbicide glyphosate in its dog foods after buying a bag of it at the store. It was not clear how he knew the herbicide was there, nor did he give specific amounts, and ultimately the case thrown out by the court. The judge ruled that even if the food had trace amounts, they were not likely to harm dogs.

So is there an herbicide in the Nutrish dog food, possibly an accidental amount from the various crop ingredients —  alfalfa, carrots, and other vegetables? It’s possible, but not probable. But if there is, the amount is likely so trace that it does not affect dogs at all. And here’s what the J.M. Smucker Company who manufactures Nutrish had to say at the time of the lawsuit’s inception:

“We were disappointed to be recently notified of a lawsuit filed against us claiming we knowingly deceive pet parents about our products. Despite what this lawsuit claims, we would never use ingredients in our products that harm pets. The pesticide mentioned in the lawsuit, glyphosate, is commonly used by farmers but is obviously never added as an ingredient in our products. All our products meet or exceed federal food safety requirements.”

And Rachael Ray has continued to feed her own dog, Isaboo, the Nutrish food, which is always a good sign.

Check out this cute video of Isaboo visiting her mama at work:

Okay, now let’s get to the products themselves so you can choose which Nutrish dog food is perfect for your pup.

This dog food comes in three different flavors — we’ll take a quick look at some of the best ones.

If your dog loves a hearty, beefy dog food, this is the perfect healthy choice for her. The first six ingredients are: beef, beef meal, dried peas, soybean meal, whole ground corn, and chicken fat. Further on, you’ve got alfalfa, carrots, and beets for the vegetables. Again, this dry dog food does not contain any fruit, so that’s a drawback. But the price is very reasonable! Find a 40-pound bag here: 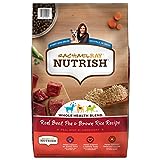 This last Thanksgiving, did you give your dog turkey leftovers? If she’s a devoted turkey fan and won’t eat anything that isn’t the Thanksgiving bird, give this dry dog food from Nutrish a try. Its first six ingredients are: turkey, turkey meal, brown rice, dried peas, dried plain beet pulp, and  brewers rice. True to the Thanksgiving spirit, this dog food contains cranberries and venison as ingredients #11 and #12. You can tell Ray was thinking of a Thanksgiving feast when she dreamed this mix up. 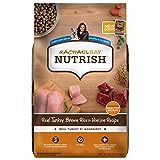 This is the dry dog food that Eira recently fell in love with, and since I already listed the ingredients above, I won’t list them again here. Suffice it to say that Eira gives this dog food a resounding two-paws-up. 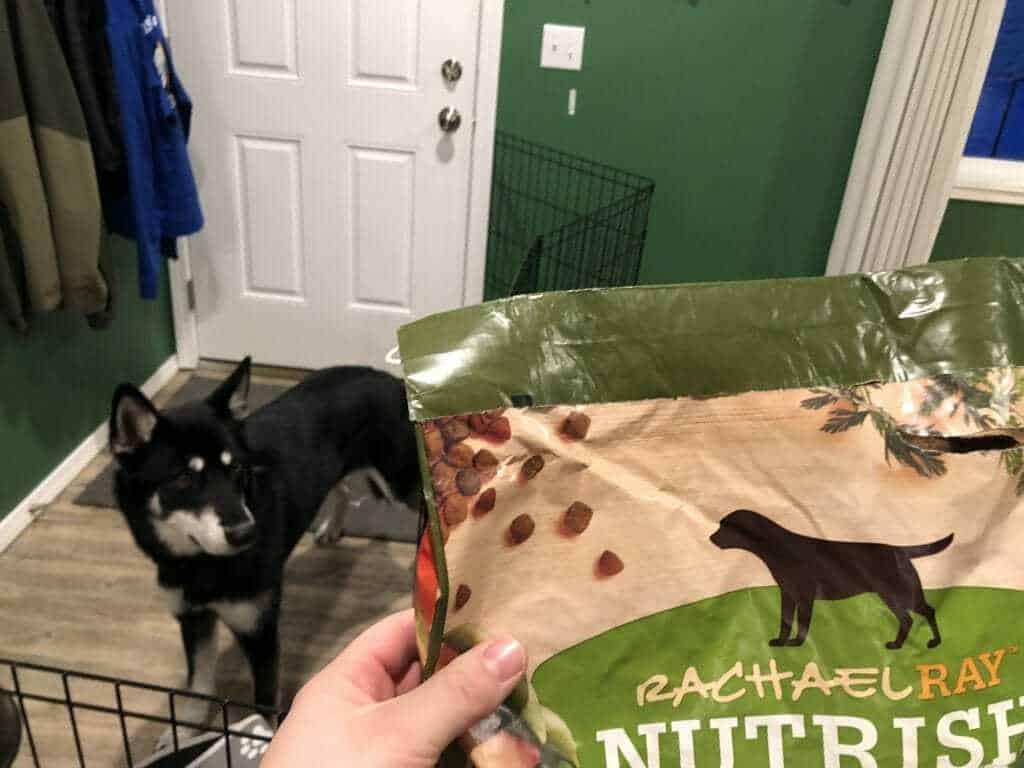 Eira eyes her bag of Nutrish with eager anticipation

Literally two seconds after I pour it into the bowl, Eira’s eating. 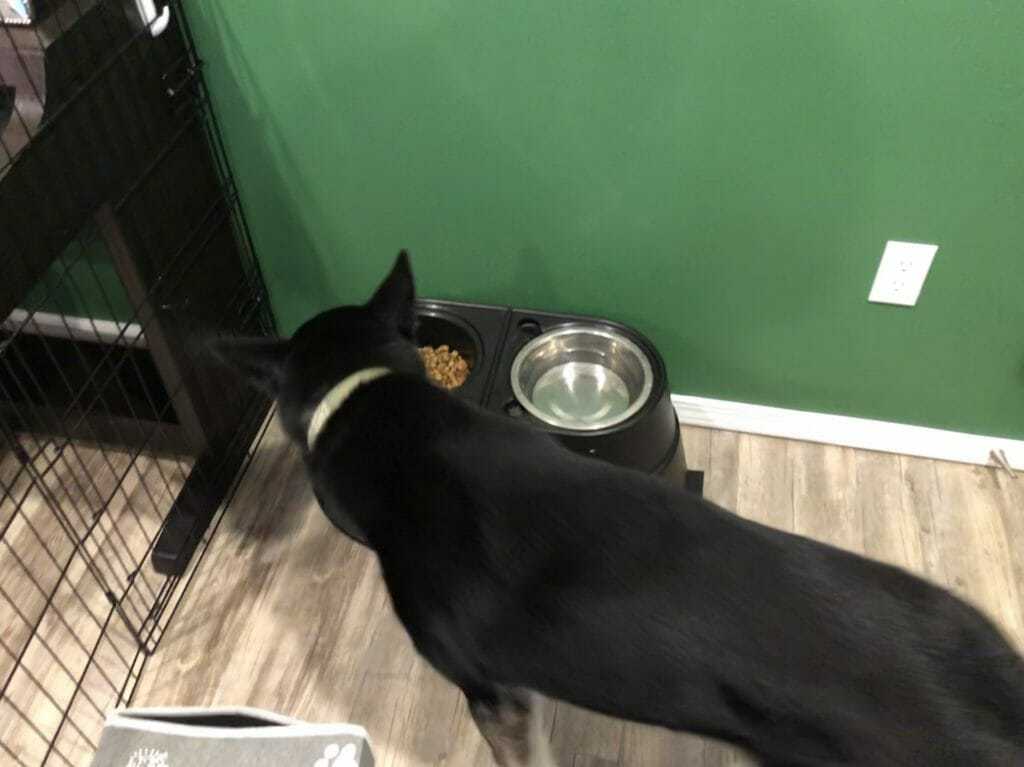 When she sees that I’ve poured the food, she goes straight into her puppy playpen and chows away. 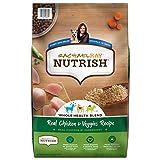 If you’re looking for more fruits and veggies in your dog’s food, Nutrish has you covered. For a bit more money, you can buy Nutrish Dish — dry dog food with all those lovely vegetables and fruits that are missing from the less expensive dry dog foods. Nutrish Dish kibble is full of visible dried peas, apples, chunks of meat, and more. You could almost imagine your dog’s kibble there on a plate in Rachael Ray’s kitchen! 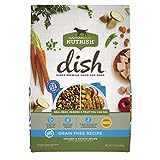 What lovely fruits and vegetables does this plainly named Nutrish Dish food have? Cranberries, carrots, peas, and apples. The first six ingredients are: beef, chicken meal, dried peas, brown rice, brewers rice, and chicken fat. The fruits and veggies follow soon after. This food isn’t grain free, but it contains no corn or corn gluten ingredients, as well as no wheat or wheat gluten. And like all Nutrish foods, whether they’re Nutrish Dish or not, the food contains no animal byproducts or byproduct meal. 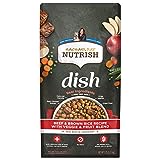 Since Eira loves the chicken and veggies Nutrish food, she would love this one, too. Its first six ingredients are: chicken, chicken meal, dried peas, brown rice, brewers rice, and pea protein. Like the other Nutrish Dish foods, the fruits and vegetables are cranberries, carrots, and apples, in addition to the peas. As in the other Dish foods, the chicken is US farm-raised and the rest of the ingredients are also US-sourced, which means your dog is getting a high-quality food.

While Ray has a line of dog food that’s grain free, the last line I want to point out is the Nutrish PEAK dog food since it’s not only grain free but also contains raw ingredients. Well, one of the PEAK foods does. There are all kinds of PEAK foods to choose from, and they feature proteins from wild animals like bison, salmon, venison, duck, pheasant, and quail. So if you’re into that, check out the link below, where you’ll find all the different PEAK flavors. None of these have the raw freeze-dried bites — we’ll get to those in a moment.

Okay, onto that raw stuff. If you’ve been toying with the idea of going raw, but aren’t sure you want to devote so much time, money, and energy to that diet, try Rachael Ray Nutrish PEAK Raw Bites.

It’s a combination of high-protein kibble with freeze dried bites of raw beef. Your dog will absolutely love it. The first six ingredients are: beef, beef meal, dried peas, pea starch, pork flavor, and chicken fat, and later on there’s lamb, sweet potatoes, potatoes, and flaxseed. If your dog needs tons of protein and isn’t satisfied by regular old kibble, try this stuff from Nutrish.

Yes, it’s expensive. But say you have a rescue dog that doesn’t want to eat much. It would be well worth it to give them a food with juicy chunks of beef inside to start getting them nourished again. 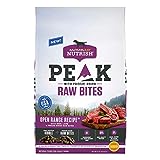 What’s your favorite Nutrish dog food? Let us know in the comments! 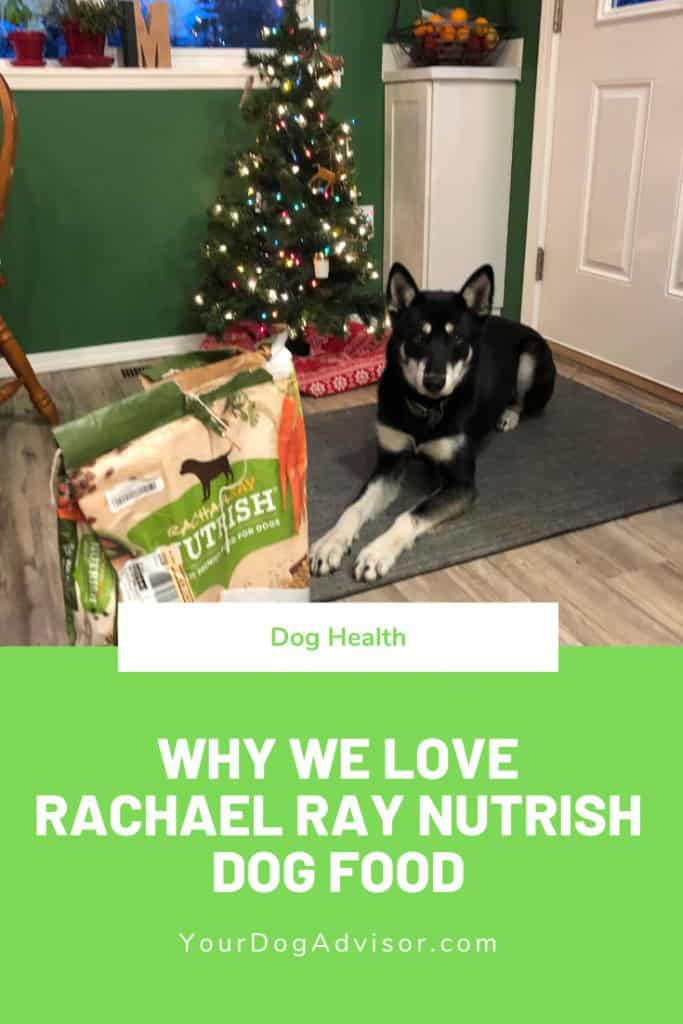