Most of us go to the grocery store to purchase the food we eat. We can find food for our dogs there, too: Pedigree, Purina, Iams, and the like are found in nearly every store in the country. It’s estimated that around 86 million US American families own dogs, so the market is strong for dog food, and foods like the brands listed above sell like hotcakes.

But are they healthy for our dogs? We’ve established that foods like Pedigree generally are not. Filled with corn, meat by-product, and corn and wheat gluten, cheap dog food might do more harm than good. But is that always the case?

There’s a Purina factory in Flagstaff, Arizona, and I’ve driven by it countless times on visits to my parents. I always plug my nose when I go by; when I was younger, I commented that the factory smelled like “ground-up horses mixed with cereal.” It’s not far from the truth. In the past, some Purina foods were found to have horse meat in them — usually under the category “meat by-products.” The foods were mainly those sold in Italy and Spain, where it might not be so unusual to eat horse.

Take this scenario for example: I was visiting a friend in Paris, France, and staying with her family, who live on the outskirts of the city. One day, she came upstairs and asked me if I would be eating the horse her mother was cooking for dinner, or if I wanted something else. I could barely keep my jaw off the floor. Horse! Suddenly the smell coming from downstairs made me feel nauseated. I tried not to show my disgust, but my dear friend picked up on it.

“It’s no big deal to eat horse in France,” she said.

So it would follow that it’s no big deal for it to be in dog foods, either, but the problem was that it wasn’t listed as such in the Purina food.

In fact, Purina, like Pedigree, uses blanket terms for many of its ingredients: meat by-products, for example, instead of the more specific (but still undesirable) chicken by-products.

Let’s break down a few components of a label from a popular Purina dog food, the Purina ONE Chicken and Rice Smart Blend. 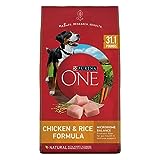 Unlike Pedigree’s comparable chicken and rice food, where actual chicken never once makes an appearance (a huge red flag!), the first ingredient of Purina ONE Chicken and Rice Smart Blend is chicken. This is a strong start! After chicken, there’s rice flour — a decent, but not excellent, source of energy. After that, there’s corn gluten meal. Corn gluten meal isn’t evil, per se, but it sure isn’t helpful to your dog. Corn gluten is the very last protein that’s left of corn once it’s processed, and the fact that it’s the third ingredient means that it makes up a lot of the protein in Purina dog food. (When really, a quality source of meat protein — like chicken meal or broth — would be more appropriate.)

After corn gluten meal, the fourth ingredient in the Purina ONE Chicken and Rice Smart Blend is whole grain corn, which again isn’t terrible but isn’t highly nutritious for your dog — especially that high up in the ingredients list. But the real problem comes in ingredient number five: chicken by-product meal.

What, exactly, is chicken by-product meal? It’s the parts of the chicken that the human food companies couldn’t use, i.e. the chicken feet, necks, beaks, unhatched eggs, and organs, that are then rendered and ground into a dry meal that goes in your dog’s food. Yes, this provides protein — but not a quality protein! Good dog foods will stay away from chicken or other meat by-product meals.

The next two ingredients are whole grain wheat (which is better than not whole grain wheat but is another source of non-animal protein) and soybean meal. Some dogs can have allergies or intolerances to these ingredients, but their presence isn’t what’s bad; it’s that they are both so high on the ingredients list when, again, whole meats, vegetables, and fruits should be up there too.

And that’s another red flag: they aren’t. The only two vegetables that appear on this ingredients list are carrots and peas. With such an animal protein-low, grain-high food, you’d hope they’d at least add quality amounts of vegetables AND fruits. But no!

So, Purina isn’t the healthiest dog food on the market. It’s also not the unhealthiest.

Let’s look at food safety recalls. Most pet foods encounter them at one point or another, so a recall alone isn’t enough to raise alarm. But it’s worth paying attention to why a pet food was recalled and how the company responded to it.

There have been about four recalls in the last ten years for Purina pet food, and the reasons have either been possible salmonella contamination or low mineral levels in their complete and balanced foods. Honestly, this isn’t terrible. It’s not like there was visible pig bristle in the kibble! (I’m looking at you, Pedigree.) The company has been active in promoting the recall of affected foods and modifying the food to make it safe again, which is also a good thing. Again, Pedigree responded in a different (worse) way by announcing that pig bristle wasn’t such a big deal because it was perfectly edible to dogs. Yuck!

All told, Purina dog food is safe enough. It’s not the best dog food out there, but it’ll do if you’re on a budget and if you’re careful to read the labels to make sure you choose a Purina food that has higher quality ingredients.

The other day, I decided to check out some canned Purina dog food to give to Eira. After putting a couple choices back on the shelf — the more expensive plastic tubs, strangely enough, had worse ingredients — I settled on a can of Purina ONE Smart Blend True Instinct wet dog food. 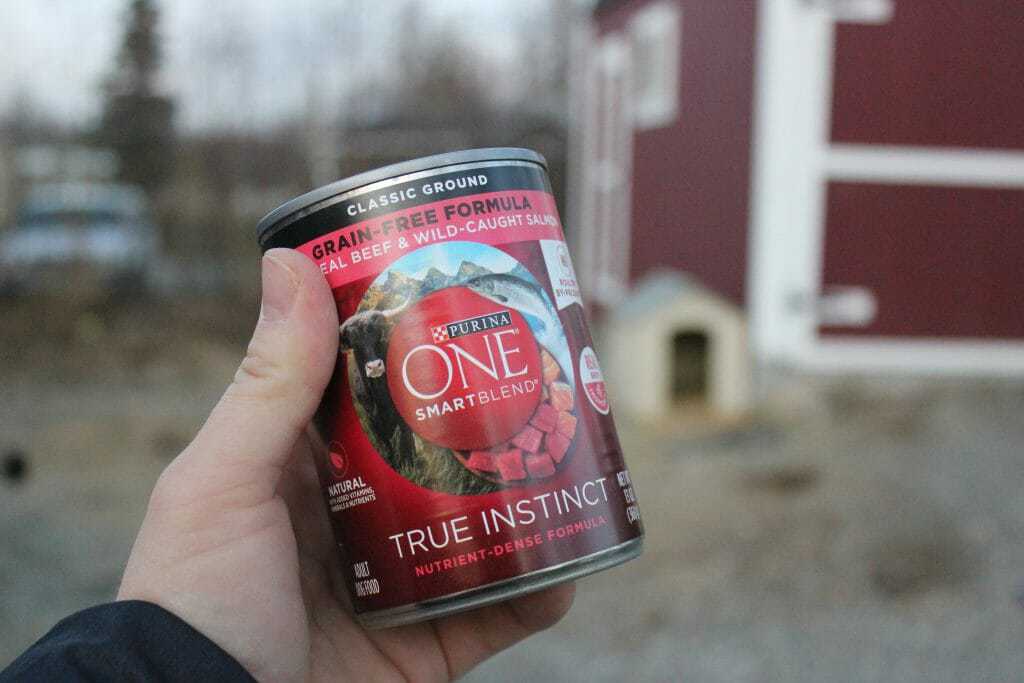 The first six ingredients in this dog food are beef, beef broth, chicken, liver, pork lungs, and salmon. That’s a lot of protein, but it’s not necessarily a mix I’d give Eira all the time. Also, there’s nary a vegetable or fruit to be found in the entire can, which is a negative point. So I definitely got this food as a treat for Eira — kind of like a candy bar would be for a human. Still, the fact that this can has salmon is impressive! Also, there are no meat by-products in it, which is another bonus. 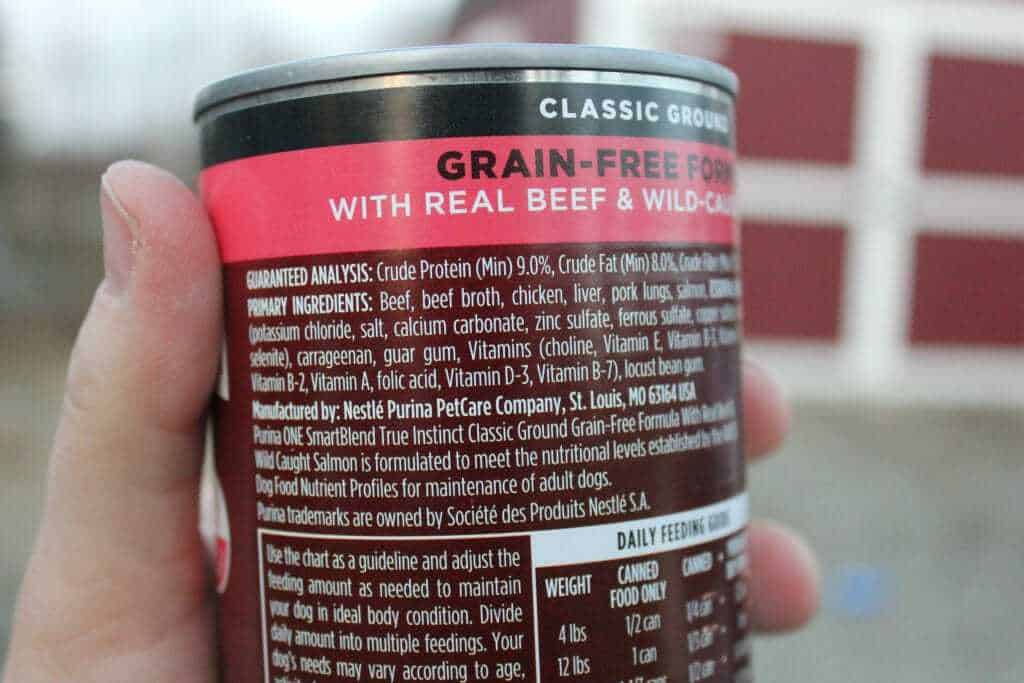 Always read the ingredients list before you purchase Purina dog food — or any dog food, for that matter!

Did Eira enjoy the food? She did. I was a little grossed out by the gelatinous glob of goo at the bottom of the can, which reminded me of that gelatin stuff in canned SPAM. Ew. But Eira loved it. 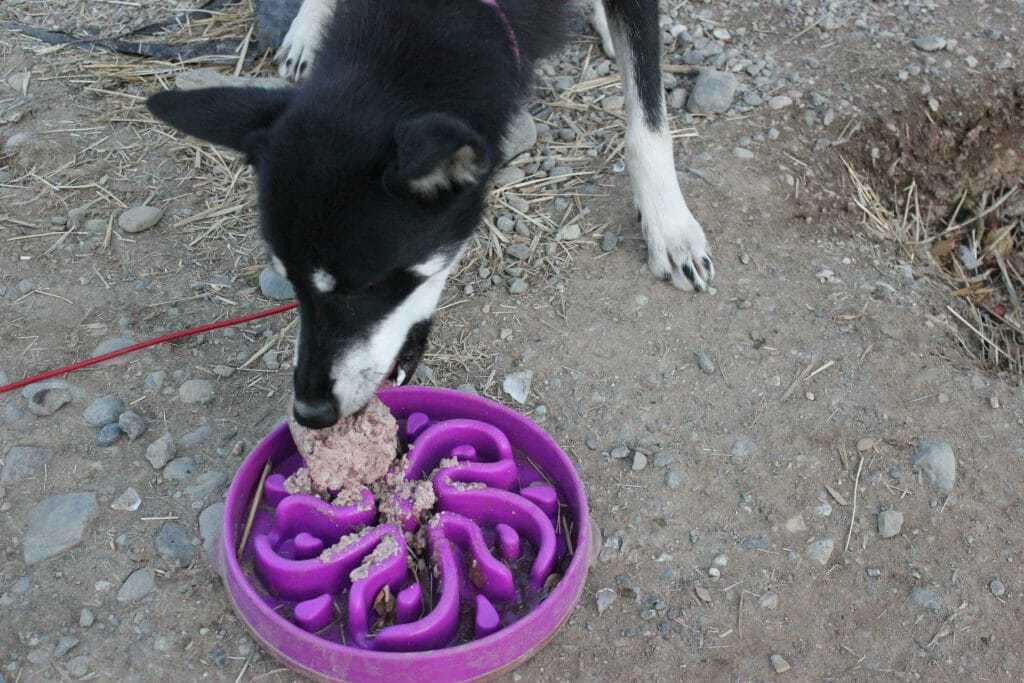 Eira chows down on her Purina dog food.

You can’t see the gelatin stuff in this photo, but it’s there. After I got the food out, it was in a big clump at the bottom. But most wet dog food doesn’t look that appealing anyway. And gelatin is found in many human foods, including popular marshmallow brands. So I really shouldn’t be that grossed out — I do love s’mores.

But it’s safe to say I won’t be buying Eira Purina food often. It’s not deadly or even harmful, but it’s far from the healthiest dog food on the market. 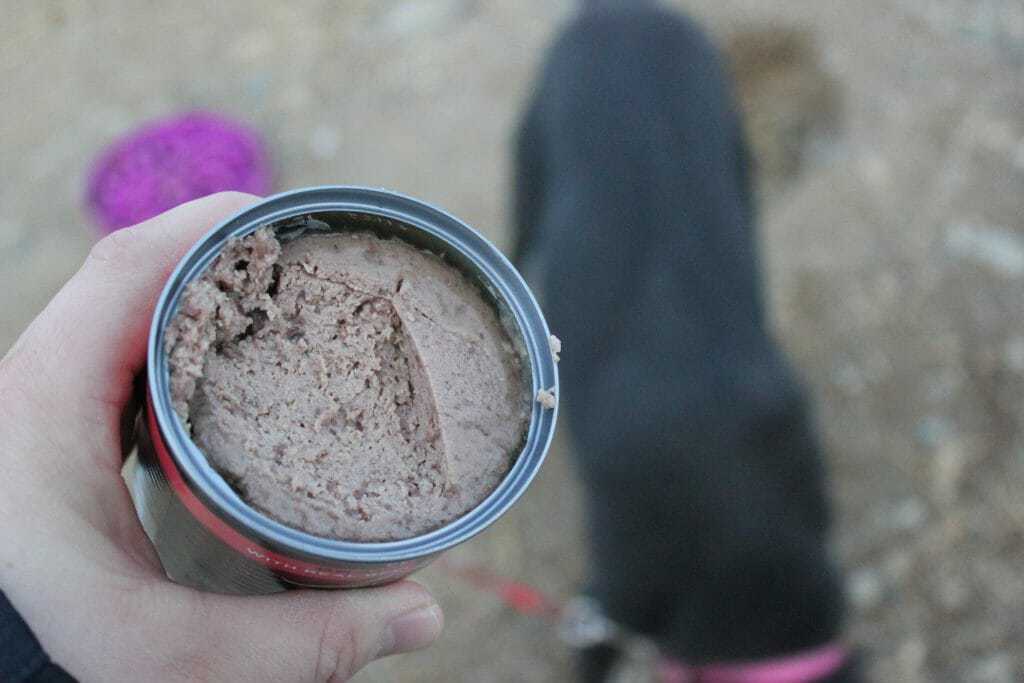 If you want to try the can Eira tried anyway, find it here. 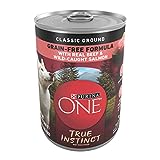 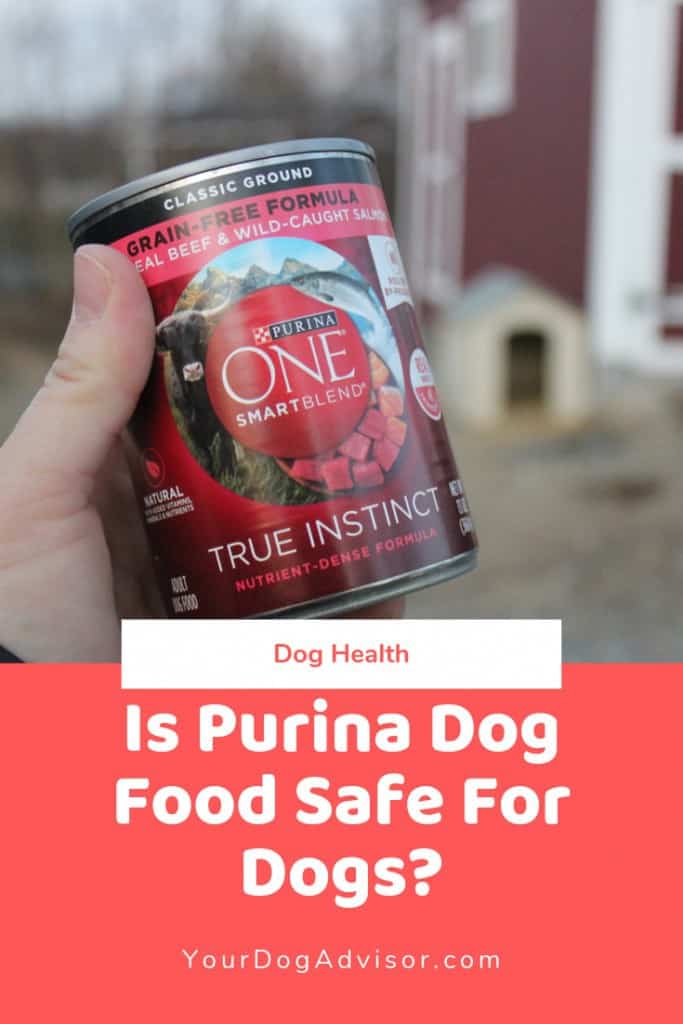