When I adopted Chelsea almost three years ago, I instantly fell in love. I’d never heard of the Ori Pei before, nor was it a breed I had done any research on. After experiencing her loving nature and wet kisses, however, I was hooked.

With a rough history as a stray, Chelsea came to me with numerous scars, both internal and external. This included a scar over her left eye, leaving her partially blind and with an irrational fear of men. Combined with her sassy personality, it’s safe to say that Chelsea is quite unique.

Considered a designer dog, the Ori Pei is a combination of the Chinese Shar Pei and a Pug. Also referred to as a Pugpei, Sharpug, or Pug-a-Pei, this breed is just as playful as they are cuddly. Here’s a look at a few things to know about the adorable Ori Pei.

1. The origin of the Ori Pei is recent

While the origin of most breeds is unknown, the Ori Pei was created just a few decades ago in 1970 by Aaron Silver. A breeder in the United States, he was interested in creating a dog that looked like the Shar Pei but had fewer health issues. By breeding a Shar Pei with a Pug, he was able to do this while also creating a smaller, more manageable breed. This is how the Ori Pei was ultimately created.

2. They have trickster personalities

Known for being incredibly smart, the Ori Pei can be quite the trickster. They love to run away with your shoes or underwear forcing you to chase after them. Chelsea will do this quite often. It’s one of her favorite games. Another game she likes to play is Hide and Seek. When she doesn’t want to come inside from the yard, she’ll stand perfectly still and ignore my calls. She thinks that if she doesn’t move and it’s dark enough, I can’t see her. For this reason, the Ori Pei may not always be easy to train. 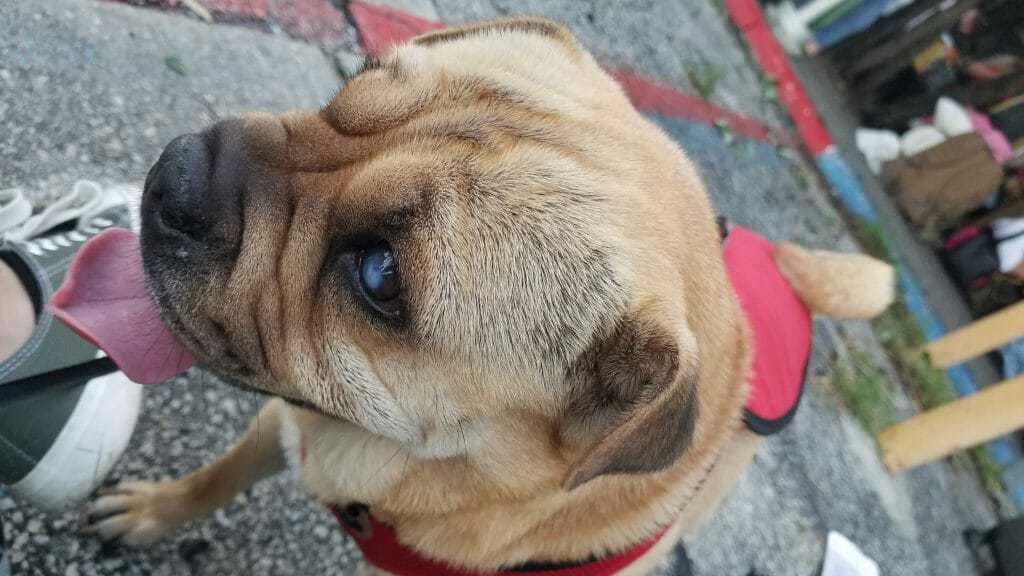 My Ori Pei Chelsea taking a walk with me during one of our many trips together.

The Ori Pei is incredibly loyal. They will follow their favorite humans around the house and won’t hesitate to cuddle up next to you on the couch. If you’re taking a shower, don’t be surprised to find them sitting outside the door or right next to the tub patiently waiting for you. They’ll even hop right into bed with you each night, cuddling up against your body and hogging the bed. It should come as no surprise that since they love the company of their human that they often experience separation anxiety as well.

4. They have separation anxiety

We never enjoy leaving our furry friends behind when we have to go to work, or we go out with our friends, but we can’t take them with us everywhere. Like with most breeds, the Ori Pei experiences separation anxiety when their favorite humans aren’t home. I can’t tell you how many times I’ve been out running errands and check my nanny cameras to find that Chelsea is patiently waiting for me by the front door. On the plus side, she goes nuts every time I come home wagging her tail, bringing me toys, and smothering me in kisses. It’s my favorite part of the day.

The Ori Pei may be small in size, but they aren’t afraid to alert you of any strangers who get too close to your home. For this reason, they make great watchdogs. They might not be a fan of the mailman, but you’ll always know when a potential intruder comes to the door.

When a breed is brachycephalic, it means they have short noses that can make it difficult for them to breathe. The Ori Pei is brachycephalic and will pant more often than other breeds to maintain their body temperature. This also means that this breed doesn’t do well in extreme temperatures, either hot or cold. Short-nosed dogs will also rest more often than other breeds, especially after exercise or play. 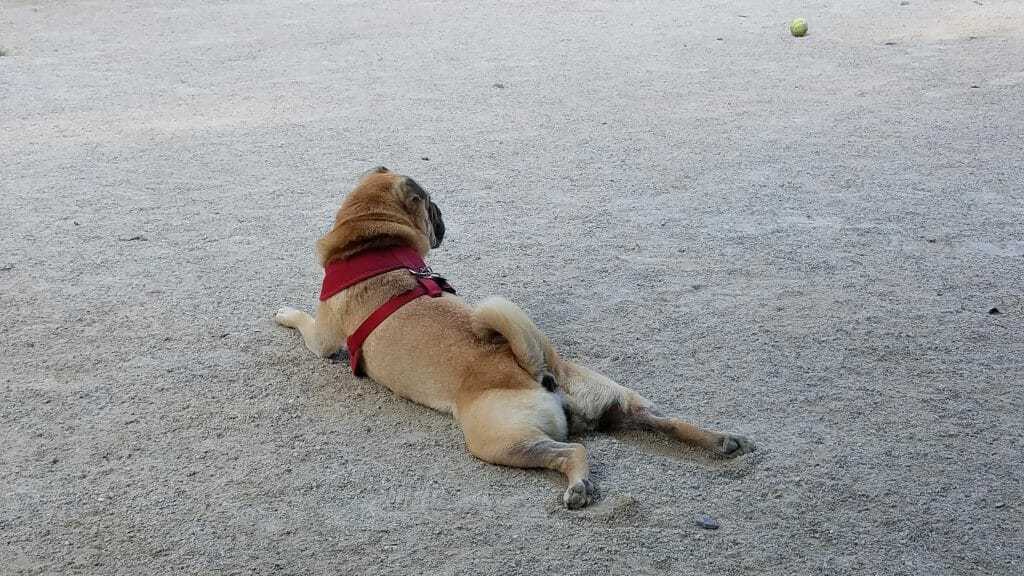 Chelsea relaxing at the dog park as she takes a break from playing to watch the other dogs. Ori Peis are one of the few breeds who can lay down with their back legs sprawled out like this.

7. Their wrinkles need to be cleaned

While Ori Peis don’t have the same amount of wrinkles as the Shar Pei, they still need to be cleaned regularly. Dirt, sweat, and bacteria can get trapped between the skin leading to yeast infections and irritation. To prevent this, it’s important to take a damp cloth or baby wipe to clean the skin hidden by any wrinkles and then dry it with a washcloth.

Taking care of an Ori Pei is relatively easy. They have short fur, so they don’t require much grooming. Since they only shed seasonally, you won’t have to deal with finding fur balls all over your house. Brushing and bathing them regularly can help to reduce shedding. They require just forty-five minutes of exercise per day, either by taking them on walks or giving them free rein in a fenced-in yard.

9. They tend to have health problems

Unfortunately, due to their unnatural breeding, the Ori Pei tends to live an uncomfortable life and often ends up suffering from health problems as they get older. For this reason, it’s suggested that you adopt an Ori Pei rather than work with a breeder.

10. They love to chase small animals

The Ori Pei may not be considered a hunting dog, but they certainly like to chase after small animals like squirrels and rabbits. If they happen to catch them, it’s not unlikely that they’ll become the dog’s snack. My pup Chelsea loves to chase animals, and every now and then she’ll leave me their corpses by the back door. 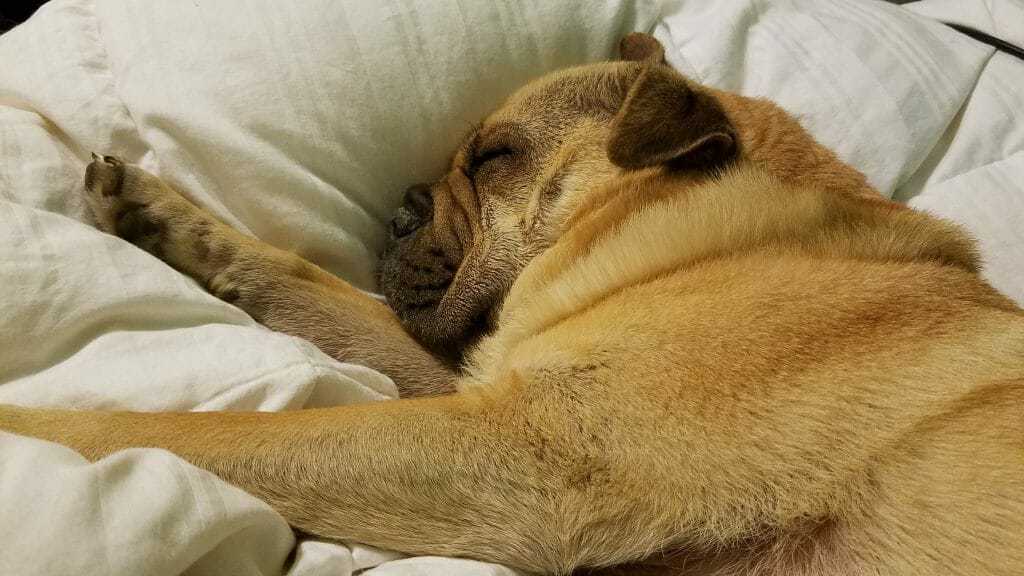 Chelsea taking a nap after a long day of playing outside.

11. They’re impossible not to fall in love with

While their adorable faces certainly help, the Ori Pei knows just what to do to get what they want from their favorite humans. From pawing at you playfully to giving you big puppy dog eyes, it’s hard not to spoil them. I would know. Chelsea is probably the most spoiled dog in existence.

If you’re looking for a loyal dog that will both cuddle and play with you, then an Ori Pei may be a breed you want to consider. Adopting this breed will ensure you always have a trusted companion to share your bed with. Great with small children, they’ll quickly become part of the family. 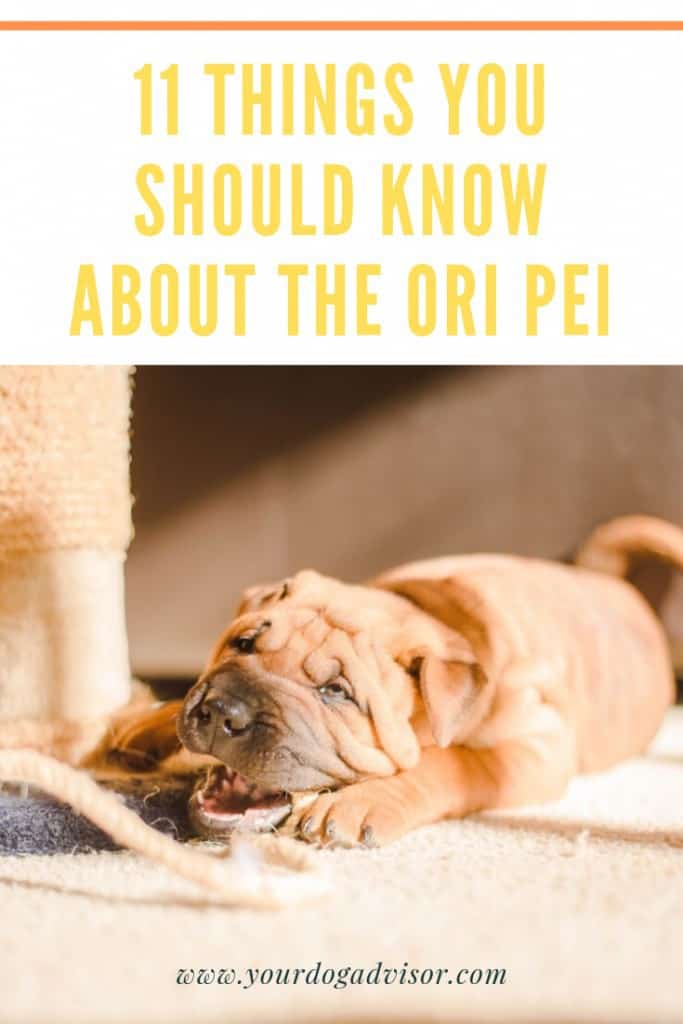