While you can train your dog to an extent, there will come times when even the best training won’t keep your dog from barking, jumping, or even nipping at another dog or person. Take my German shepherd, Bella, for example: she knew how to heel, sit, come, stay, and more at a young age. She never ran off from the house. She was friendly to strangers if they approached her correctly. But one day, we were camping with a group of people when a friend from a neighboring campsite walked up to us. He asked if he could pet Bella, and I said yes. I figured she’d be fine approaching him, so I got up to grab a water bottle off the table.

Bella darted up to the man, bit him on the ankle, and ran to hide under the car! I was mortified. She knew she was in trouble, but I also couldn’t be too frustrated with her — she thought the man was a threat (he didn’t quite approach correctly; he was too eager) and gave him a warning. The bite was shallow and only broke the skin in one area, but I still felt horrible. I tied Bella back up and apologized profusely to the man.

Now, looking back, I wish I’d had some corrective spray with me that day. Unlike electric collars, choke chains, or other forms of punitive punishment, the corrector spray doesn’t hurt the dog — nothing bad-tasting comes out. It’s basically a small bottle that emits a sharp noise that dogs, with their excellent hearing, don’t like. It’s like saying ‘no,’ but with more oomph to it.

And you can use it sparingly. Saying “no” will work most of the time, but there are instances when behavior correction spray will be more effective. 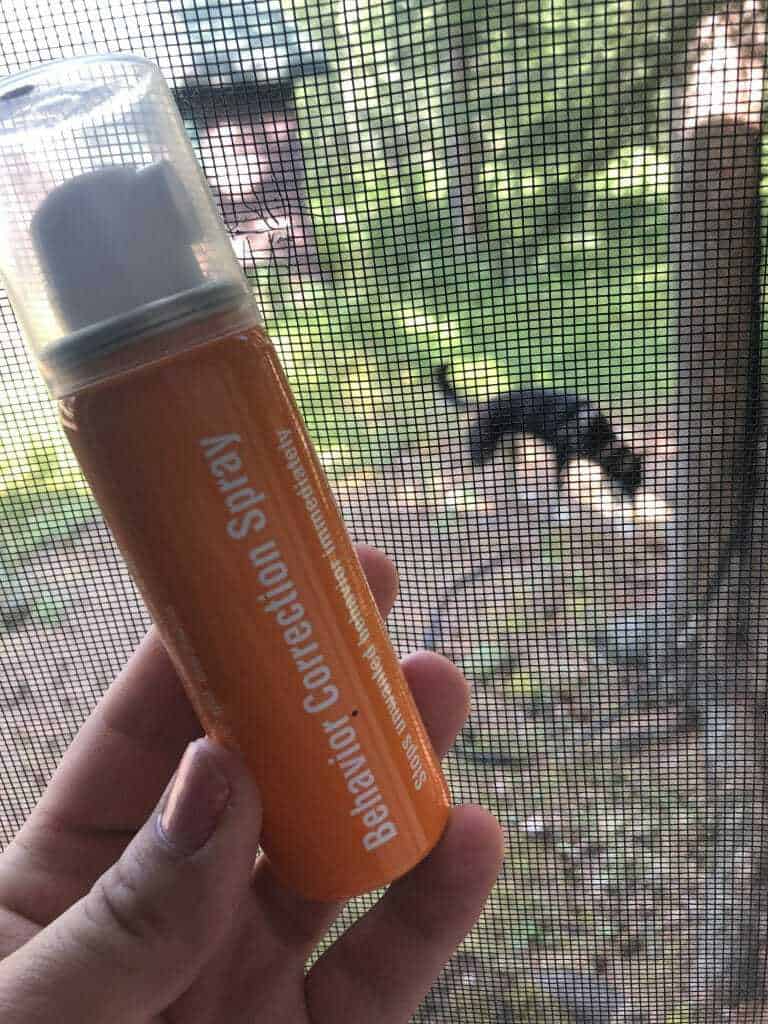 Our bottle of Sentry Good Behavior Stop That! Correction Spray.

I confess that when Eira was a puppy, I didn’t want to use a method like this one. But then we went to visit my in-laws’ home. Their two dogs, Walter and Rosemary, are adorable and sweet…and very, very loud. They bark at anyone who walks in the door, even if it’s a family member. They bark when they want to play, when they’re hungry, when they want to go for a walk. Their bark is sharp and loud, and my toddler hates it so much that he bursts into tears every time he hears it.

My in-laws tried many different methods: saying ‘no,’ giving treats when they didn’t bark, even putting muzzles on them.

None of it worked. Finally they found a behavior correction noise spray at the store. After one use, all they had to do was hold up the orange bottle when the dogs began to bark, and the pups would stop. They then said, “Good puppies!” and gave them treats.

Sometimes, this mix of negative and positive reinforcement is what works best.

Eira is pretty well-behaved these days. We make sure she gets plenty of exercise, lots of time in the house with us, and fresh water and food. She goes for long hikes in the Alaskan mountains, is (finally!) learning to heel, and is beloved by all of us.

But she, too, has an extremely high-pitched yowl. Which, again, makes my son scared of her. We don’t want that! So we bought our own bottle of Sentry’s Good Behavior Stop That! Correction Spray, hoping it would help a little with Eira’s barking problem.

A Review of Sentry’s Good Behavior Stop That! Correction Spray

One reason we ordered Sentry’s spray is that it contains a calming lavender-vanilla scent, so it’s not just a blast of loud noise for the dog. The smell releases into the air and works as a nice air-freshener for your house — it really does smell that good. In addition to the noisy hiss it releases, the spray also contains a pheromone to help stop the dog’s unwanted behavior.

Pheromones are chemical substances that animals release into the air, affecting other animals’ behavior. The synthetic pheromone contained in Sentry’s spray works, according to Pet Central, because “Between a dog’s nose and mouth, they have something called the vomeronasal organ (also known as the Jacobson’s organ) that detects pheromones through different receptors. These receptors communicate with the brain, causing a behavioral response to take place.”

Knowing this information, we purchased the Sentry spray hoping that the calming scent plus the pheromone would help us not need to use it as often as my in-laws’ noise-making spray.

Take a look at the video below to see how it works.

The spray sound was louder in real life than it is on the video, but it isn’t deafening. Just sharp enough to send a message to your errant pup.

The other day, we tried it on Eira. We’d just arrived to the lovely cabins at Red Eagle Lodge, our favorite Alaskan lodge just outside Wrangell-St. Elias National Park. 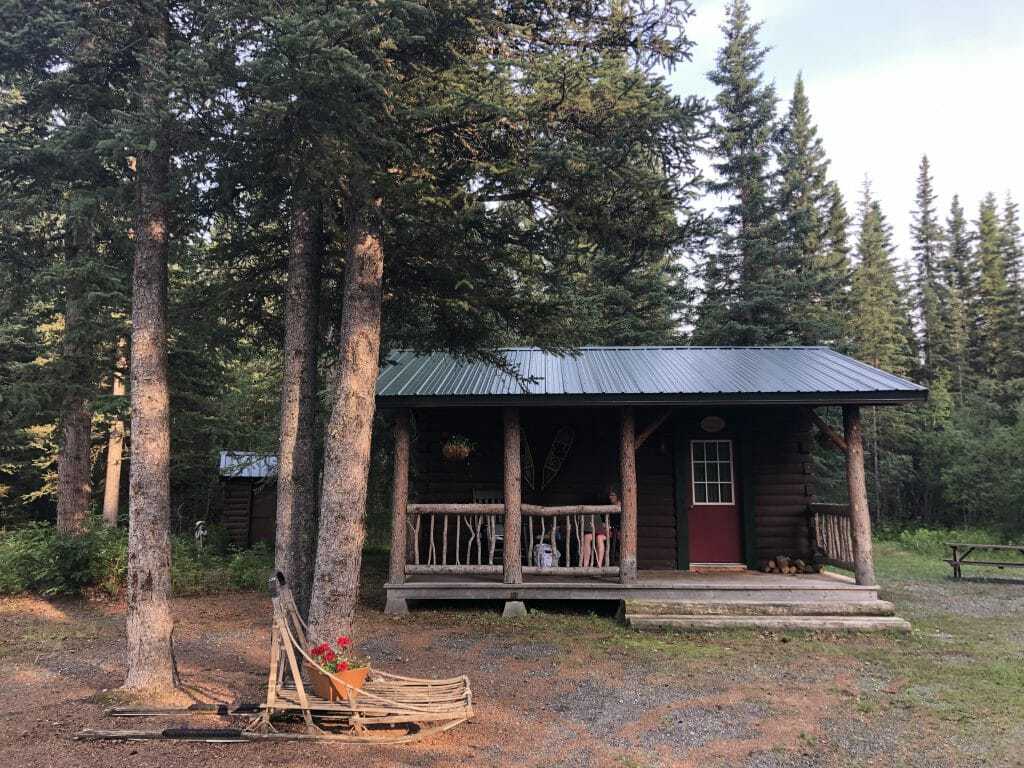 Our cabin at Red Eagle Lodge. Eira’s daytime spot is just next to the cabin, behind those spruce trees.

We tied Eira up outside the cabin so we could unload the truck without her running away. It was late at night, but still light out (Alaska currently still has almost 20 hours of daylight in some areas). Eira started barking. We gave her water and food, but she kept barking, and when she saw us go inside the cabin, she jumped up.

Now, the owners spend a lot of time and money each year polishing the logs that comprise the cabin. We did not want Eira scratching those logs. So we said, “No,” but she jumped up again.

We sprayed the Sentry spray, facing down, into her area. It’s crucial to note that you are NOT supposed to spray it in the dog’s face.

Eira got down immediately. She even stopped barking! She didn’t seem cowed by the sound. She simply got down, tilted her head at us, and didn’t jump back up or make any more noise. We finished unloading our supplies without disrupting the sleeping cabin dwellers and campers, and then we took Eira and our toddler for a walk on the nearby air strip.

If you carry pepper spray while out on your walks with your dog in the event that an aggressive dog charges you, consider bringing Sentry’s pheromone corrective spray along instead. I have had to spray bear spray at a dog once — I didn’t want to, but it was feral and sprinting toward Eira with its ears flat back and a snarl on its face. I sprayed the bear spray to the side of the dog because I couldn’t bring myself to fully spray the strong pepper into its face, and it stopped charging us but then stalked us all the way home.

Now, I have my harmless corrective spray. It works so well that I would fully trust using it instead of bear spray on a dog who was running aggressively toward me! Plus, you don’t have to worry about pepper stinging anyone’s skin or eyes. Like I mentioned before, the Sentry lavender chamomile spray smells amazing. 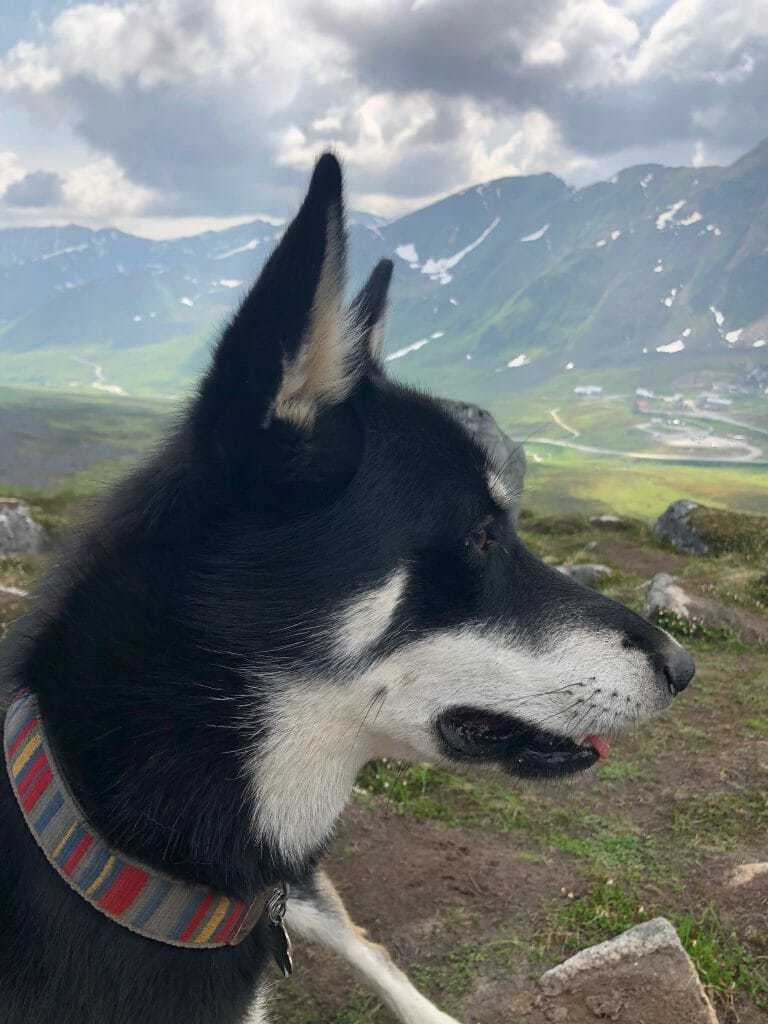 Now when Eira and I explore mountain trails, I bring corrective spray for any aggressive dogs we meet, and save the bear spray for the bears.

We love the Sentry spray, which you can easily purchase on Amazon.

There are several additional spray-based products available, too. The fantastic thing is, the spray bottles last a long time because you only need to use them rarely, to great effect.

If you don’t care for the pheromone or the lavender chamomile scent, you’ll prefer this spray. All it does is hiss air, so it works similarly to the Sentry spray, but doesn’t have all the bells and whistles. While it’s only a four-ounce bottle, you can spray it 300 times. It should last quite a while! It is a little more expensive than the Sentry spray, but if you have an aversion to scents, it’s the can for you. 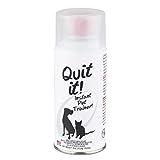 If you take a lot of walks in areas that have loose dogs, you’ll love this pet corrector spray from The Company of Animals. You can also purchase a special holster to go on your belt or backpack so that you don’t have to dig around to find the spray can when you need it, or carry it awkwardly in your pocket. Like the Quit It! Pet Trainer Corrective Spray, this spray emits only noise. It is, however, a bit pricier than the Quit It! Spray. Still, the holster aspect is quite nice! 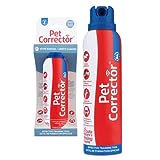 And the holster here: 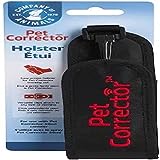 Instead of a spray, my in-laws used this type of noise-based correction device. It makes a honking sound instead of a hissing sound, so if you find that the hiss isn’t working very well for your dog, consider this honking noise instead. Sometimes you need an added burst of noise to help your dog stay away from a fight, or stop barking, or stop jumping up and scratching children.

Even though we’ve only used our Sentry corrective spray a couple of times on Eira, we’ve noticed she barks less. Obviously we let her bark and howl to an extent, because she’s a dog. But when it gets out of hand or she’s really scaring our son, we use the spray. We can rest in knowing that it doesn’t hurt her like an electric collar would, and that if we give her a treat and some praise after she stops the unwanted behavior, then we can use the spray as a pathway to more positive reinforcement-based behavior. 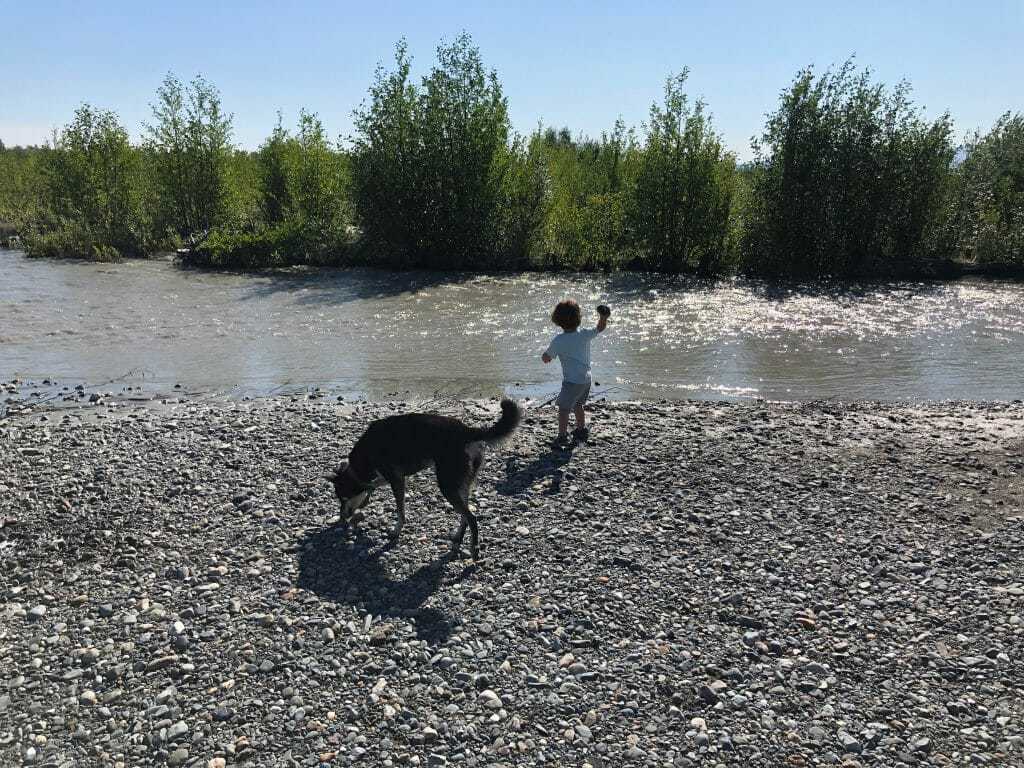 Eira enjoying some time at the river with my son.

If you get corrective spray for your dog, remember NEVER to spray it at your pup’s face, or at any dog or human’s face or body. Spraying it downward in the general area will work just fine!

Have you ever used corrective spray on your dog? Which type works best for you? Let us know in the comments! 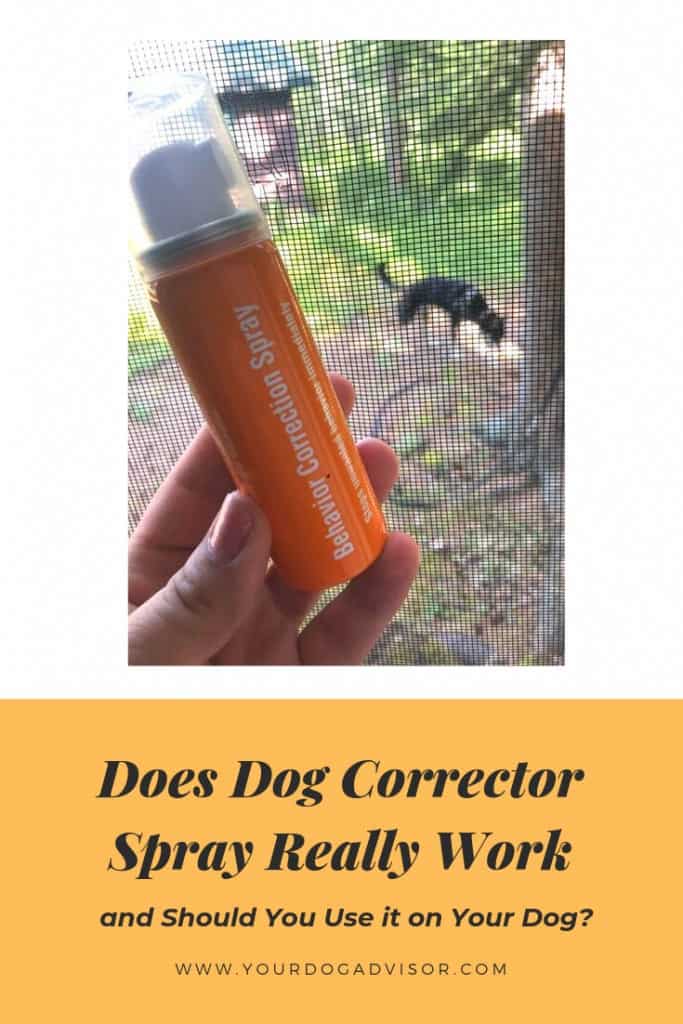