I grew up in southwestern Montana, at the foothills of the Rocky Mountains. This was a perfect place to grow up with my German shepherd, Clancy, who loved nothing more than sprinting up mountains or racing across fields.

It was also the perfect place to see deer lying on the side of the road, and to smell the unmistakable scent of their decay. Sometimes, those nastier parts of Montana life showed up at our front door. Like the time a deer skull showed up on the front lawn, probably left there by some wild animal. Or the time a wild creature shared a fur-covered deer leg with Clancy by leaving it right outside her fenced yard.

Needless to say, Clancy found a way to get that leg into the yard with her, where she proceed to enjoy for no fewer than twelve hours. She licked that bone clean, folks! It was a strange thing to watch; Clancy had never seemed more wild than in that moment. In hindsight, it might’ve been best to remove the leg, because who knows where it came from, how fresh it was, or what diseases it might’ve carried.

But Clancy was no worse for the eating of the deer leg. And later, at Thanksgiving, someone passed her turkey bones under the table. She ate that without incident, too. Maybe, like a cat, she had nine lives, because cooked bones, be it a cooked chicken or turkey bone, can be deadly to a dog.

I didn’t find this out until much later, when my dog Bella, Clancy’s daughter, was about five years old. She was chewing on a cooked chicken bone left over from supper when suddenly she started to gag and choke.

I acted swiftly, opening Bella’s jaw and swiping the offending bone out with my finger. She threw up right after but then seemed okay. I called the vet and was told to keep a careful eye on her for 24 hours, and to not let her eat cooked chicken bones because they can splinter and slice through your dog’s organs.

Raw bones are much better because raw bones, like the deer leg Clancy enjoyed years before, don’t typically splinter and are much safer for dogs to chew. 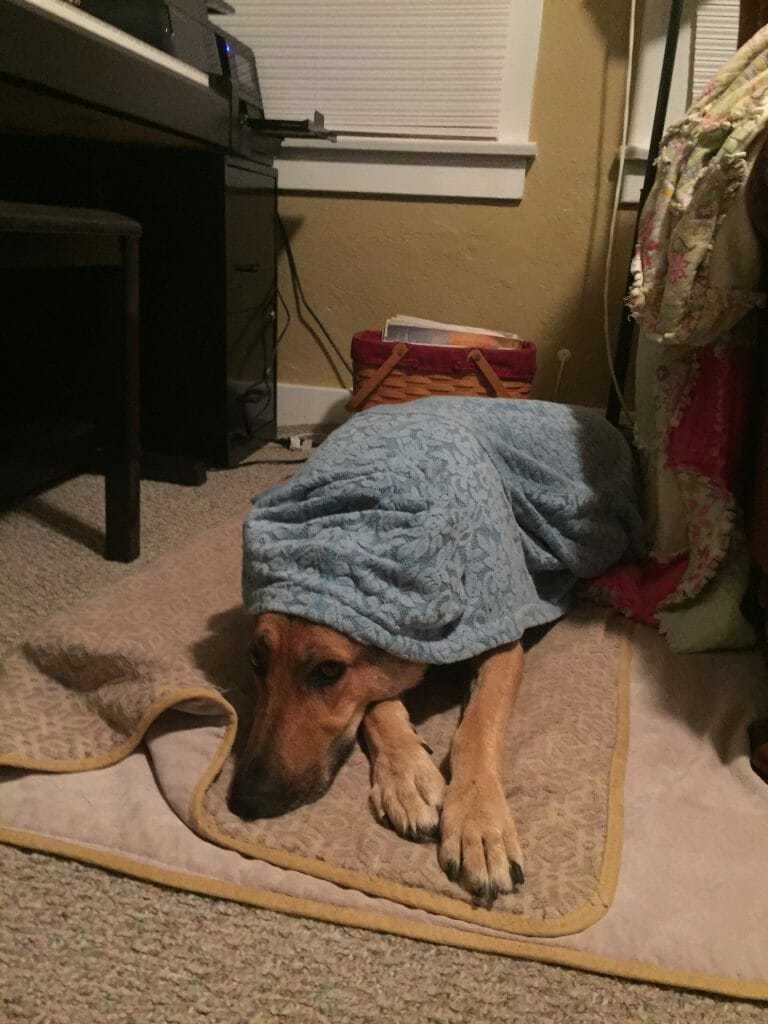 Bella looking exhausted after her choking incident with a chicken bone.

Horrified, I ran to tell my husband we could never give Bella chicken bones — or cooked bones of any kind — ever again.

We were lucky that Bella didn’t seem to have ingested any splinters.

But what happens if your dog isn’t so lucky? What if your dog eats a chicken bone? What do you do next? 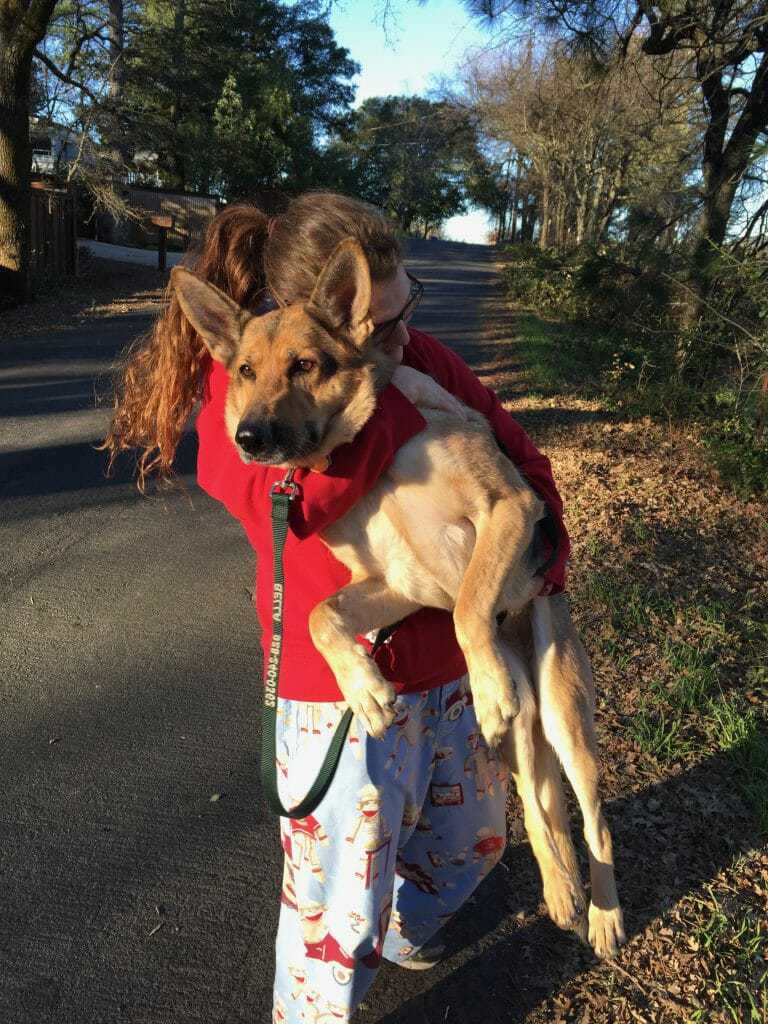 This is the hardest thing to do, because your dog is your baby. But if you leave a plate of chicken bones on the table and your dog jumps up and gobbles them while you’re in the bathroom, the first thing you need to do (as long as your dog isn’t choking) is stay calm. If you panic and yell at your dog to stop eating the chicken bones, she might start gobbling faster because they taste so good and she knows you’re mad but she can’t help it — they’re delicious.

Or if you just see a licked-clean plate and a guilty dog, try not to get angry in your fear. The first thing you should do is call your vet. Some vets will tell you to give your dog a soft piece of bread to try to keep the fragments from puncturing the stomach. Others will have other tips. Or they might tell you bring your dog into the vet or to the nearest dog hospital.

Once, my baby ate a stick (he was trying to be like his sister, my German shepherd Bella!). He choked, vomited, and then had a strange, hitched breathing. I called his doctor and she told me to take him to the emergency room, where they could perform x-rays to see if his intestines were blocked off or in danger of being punctured. 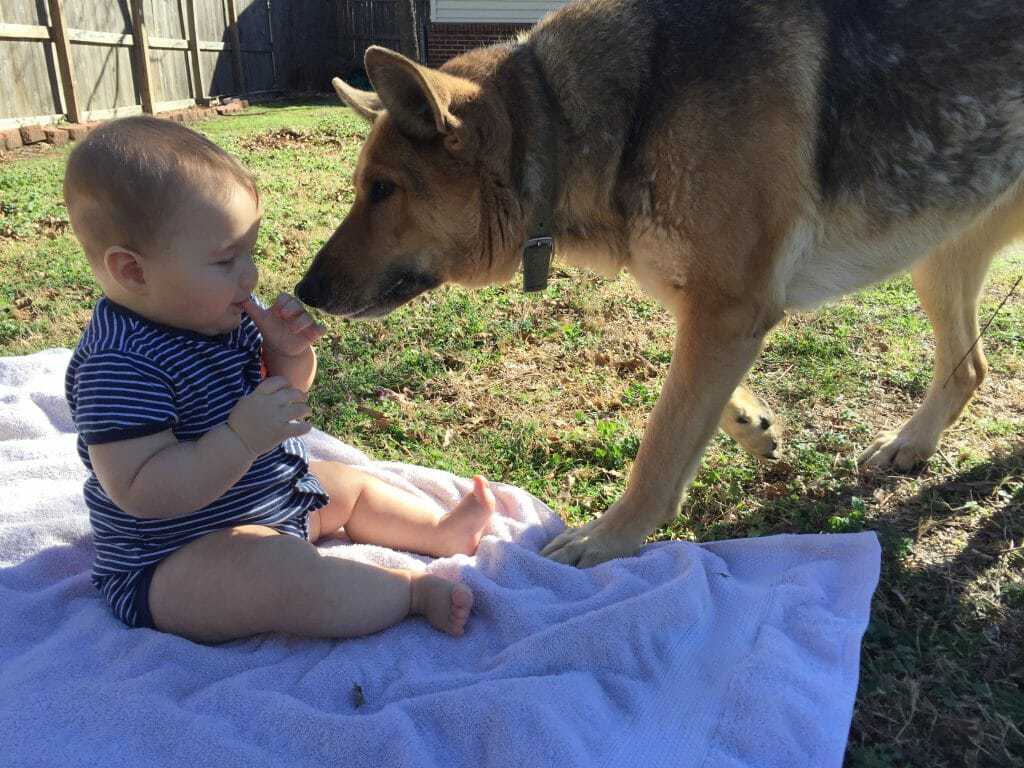 My son and his sister Bella.

In the x-rays, no sticks were visible. They had already passed through his digestive system and appeared a few days later…in his poop. This is what you might need to do for your dog, if she’s already ingested chicken bones: keep a careful eye out for vomiting, lethargy, constipation, bloating, or loss of appetite, all of which could be signs that the chicken bones have done damage or are causing problems.

If you notice your dog having any issues, bring her to the vet or animal hospital immediately.

Keep in mind that just because your dog ate chicken bones doesn’t mean they’re 100% going to puncture or block anything. The risk is definitely there, but take a deep breath and move your dog’s bed into the room with you if it isn’t there already so you can monitor her throughout the night. Watch for chicken bones in her stool within three days. If you don’t see any, take her in to the vet again — they could be blocking something in her intestines, throat, or esophagus.

Basically, if there’s no choking emergency or obvious sign of distress, the event of your dog eating chicken bones will be a time of passive concern. As a parent I have experienced this several times; even as a dog owner, I’ve felt it many times. Once, someone left a bottle of antifreeze in the garage and we put Clancy in there without checking for it. By the time someone found the antifreeze (which is absolutely deadly to dogs if you don’t seek immediate care) in the garage with her and we weren’t sure if she was okay.

She ended up being fine, but it was a scary watching and waiting period. Part of owning dogs, though, is understanding that you will have scares like this. And most of the time, everything will turn out fine and you can learn important things from the experience. Hopefully your dog will learn something too, but don’t count on that for safety!

Once your dog gets through a chicken-bone episode, it’s time to up your game in the keep-chicken-bones-away-from-pets game. As soon as you’re done eating chicken with bones, throw the bones in the garbage and then take that garbage outside and put it out of reach of your dog, preferably in your outdoor dumpster or garbage can. Don’t underestimate your dog’s ability and willingness to go trash-can diving indoors if you dump chicken bones there.

Also, keep them off the counters. You may think you have pushed the chicken bones far enough back so that your dogs can’t reach, and you might put off cleaning up because of it, but dogs are smart. They can and will jump up to get chicken bones if they’re big and determined enough. They’re wired to love meat, after all.

Give Your Dog Safe Alternatives

Eira doesn’t go after meat too much because she has a Benebone, a delicious-tasting chew bone that she absolutely loves. Benebones are safe to chew for about a month or so, and the company has detailed instructions on when a Benebone becomes unsafe for use. Make sure your dog has tasty chews like Benebones, Nylabones, or bully sticks — which are highly digestible and tasty to dogs — for your dog to eat so that when you eat chicken, she isn’t so tempted to gobble and eat chicken bones. 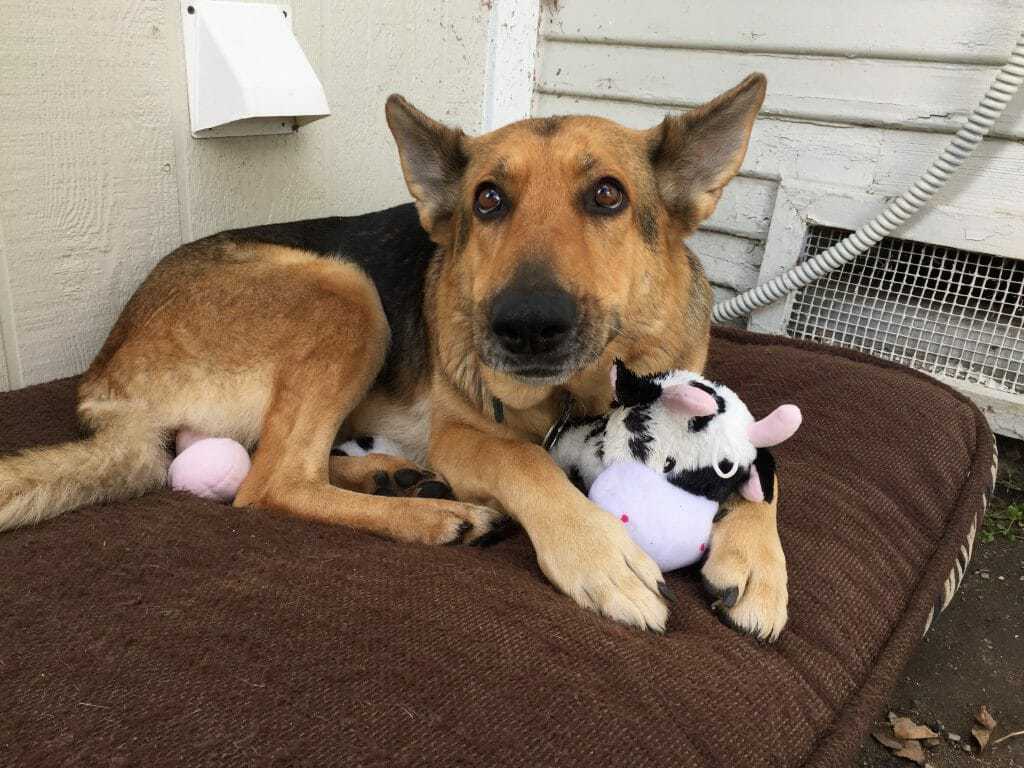 Bella didn’t want me to take her cow away from her! But I’d given it to her as a substitute for further chicken bones. 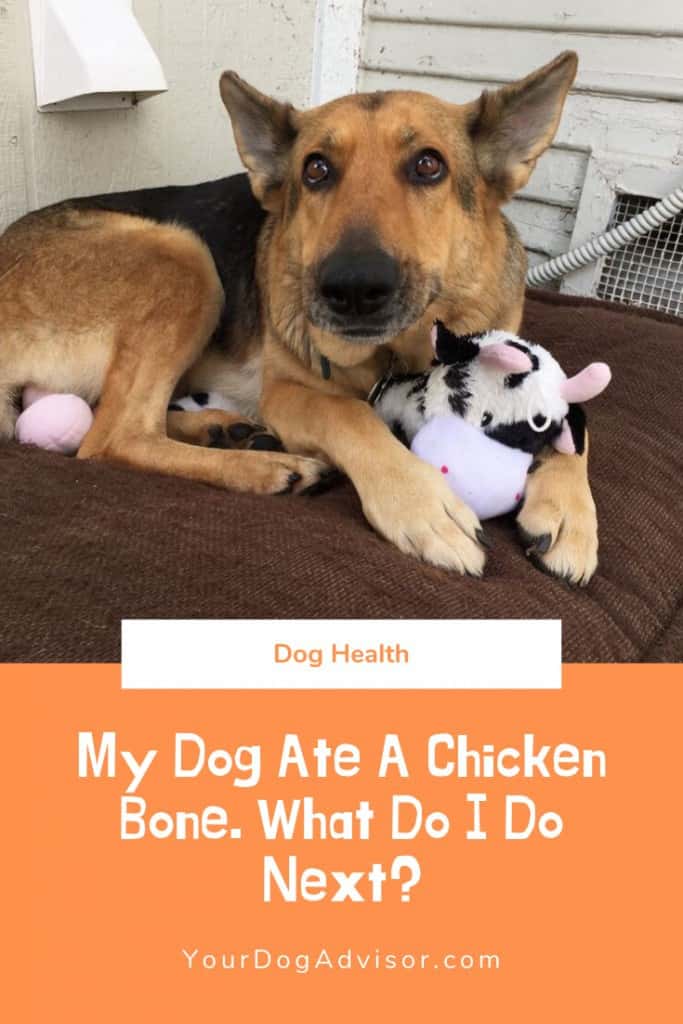