Let me make a confession first: I never even knew dog diapers were a thing before this week. Puppy training pads? Yes. Fresh patches of grass for dogs to pee on? Yes. But after recently finishing two and a half years of diaper-changing days with my toddler, I thought diapers were out of my life for a while. 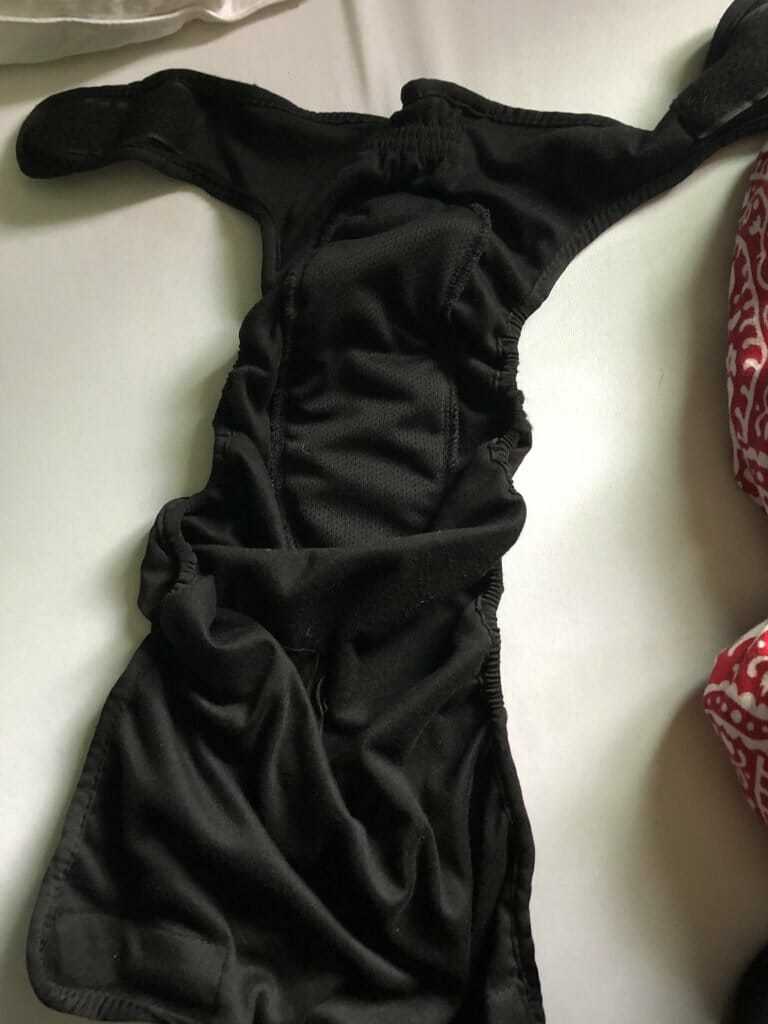 It somewhat resembles a diaper for humans, but this diaper is specially designed for dogs.

And then, Eira started acting strange while we were camping in Denali earlier this week. The day we got home, she started dripping blood everywhere. “Oooh,” I said when I saw. “She’s in heat.”

Bella and Clancy were never spayed. We bred Clancy once, and Bella never, but we wanted to keep the option open. They were both purebred German shepherds, and we loved the idea of continuing the breeding line but a good time for that never came. Sometimes I wish we had spayed Bella; maybe it would have altered her fate with bladder cancer.

When we got Eira, our veterinarian told us it might be a good idea to wait until Eira had one heat cycle before she got spayed. There are different drawbacks and benefits here: for one thing, spaying before the first heat cycle drastically reduces a female dog’s chance of getting mammary cancer. Every time a dog goes into heat, her risk for mammary tumors increases. Spaying so profoundly affects whether or not tumors grow to the point that out of all female dogs who do not get spayed, 25% of them will develop tumors in their lifetimes. Some of these tumors are fatal; many are not. All tumors cause the dog discomfort and pain and cost a lot in veterinary bills to remove—definitely more than a simple spaying procedure.

With that logic, earlier seems better.

A Messy Problem for Female Dogs

But research also suggests that sterilizing dogs too early can alter their bone growth, resulting in orthopedic problems later in life. Because German shepherds and other larger breeds are already prone to hip issues, it can be good to wait until a dog’s skeleton has more time to mature before spaying or neutering.

Because Eira s a larger dog—a mix of Alaskan malamute and German shepherd—and therefore grows more slowly than smaller breeds, we decided to spay after her first heat cycle but before the second. We’re hoping that this course of action will allow her bones to develop more properly but also give her the cancer-shielding benefits of spaying her before a second heat cycle.

As soon as I saw those drops of blood on the floor, I knew we had a problem. Eira doesn’t have a fenced backyard. If a male dog smelled his way to our house, the both of them would have free reign to get busy before any of us noticed. And we do not have the time and space for puppies (although if Eira were to get pregnant, we would figure out how to responsibly care for the dogs!).

Besides, Eira loves to hang to hang out inside, not outside. Bella and Clancy were more outdoor dogs than inside dogs and both roamed freely in their big, fenced backyard. Heat cycles weren’t much of a problem.

Dog Diapers to the Rescue

“I think they sell dog diapers at the pet store,” my husband said.

I zoomed out the door and came home half an hour later with two reusable cloth dog diapers. I let Eira sniff the box before opening them, and once I took them out, I told her we’d be putting one on her so she could stay in the house without bleeding everywhere. “I know you don’t feel great, girly,” I said, and she limply wagged her tail.

It took two of us to get the diaper on her: one to hold Eira in place and one to navigate the diaper, which first has to go over her tail and then get strapped over her hips. 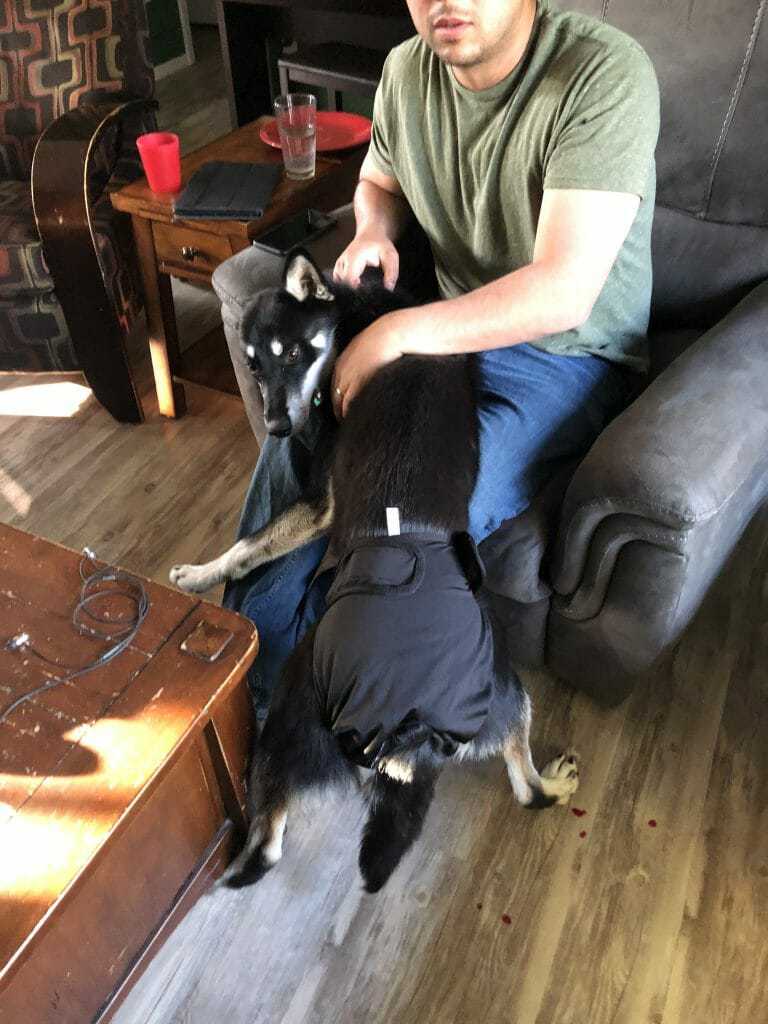 As you can tell, Eira wasn’t too pleased with her diaper at first. But if you look at our floor you’ll see why we needed it!

Sound confusing? With my family’s help, I took a video of Eira getting her diaper put on. If you’ve never used or seen a dog diaper before, the video will clear things up for you.

Thankfully, Eira’s gotten used to diaper and she doesn’t try to rip it off. I’m not sure we would’ve experienced the same level of success with Clancy or Bella!

Why Else Would a Dog Need a Diaper?

Canine diapers aren’t just for dogs in heat. If you have an older dog who’s struggling with incontinence, a diaper could be a good solution. If you’re flying with a smaller dog and know you’ll be going several hours without a potty stop, a diaper can allow your dog to relieve herself before landing.

Dog diapers can even help puppies who are learning how to go potty outside. While you won’t want to depend on diapers forever in this situation, they can be nice when you take your puppy to a friend’s house or another public space where potty access isn’t readily available.

If your dog has recently had surgery, a dog diaper can be a good potty solution for her during recovery.

You can purchase disposable diapers or reusable diapers. Below we’ve rounded up our 10 favorites.

Who says dog diapers can’t be fashionable? These pretty, flower-patterned washable diapers from CuteBone are specifically designed for females in heat. These super-absorbent, waterproof diapers might even help your pup feel a little less silly about wearing a diaper. While the closures are made of velcro, the material won’t catch your dog’s fur and tug at it in a painful way.

It appears that while these diapers are designed for estrus, they can also catch poop and pee if necessary. To avoid having to change a really yucky dog diaper for a menstruating dog who knows how to pee outside, make sure you go out with her several times throughout the day without her diaper so she can pee and poop in the grass. 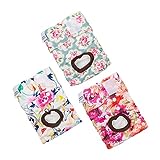 If your male dog struggles with urinary incontinence but can hold his poop, check out these male dog wraps. They only go over the male’s belly, not his behind, and they protect your floors and furniture from excessive wetting. This makes the diapers a little less intrusive (no going over the tail) and easier to wear, so if you have a dog who hates wearing things, these could work well.

Like the female menstruation diapers, they’re machine washable, super absorbent, waterproof, and comfy. And they’re hugely discounted on Amazon right now, so if you need a male diaper right away you’ll want to check these out. 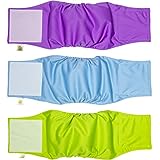 Some dogs absolutely hate wearing diapers. They’ll do anything to rip the diapers off and chew them to bits, wasting money and causing frustration on their owners’ end. That’s why this diaper keeper from Surgi Snuggly is such a fantastic product. It is not itself a diaper; it’s a comfortable full-body suit that keeps diapers in place. You can use a disposable diaper or even just a dog diaper pad inside the diaper keeper and the diaper won’t go anywhere.

The Surgi Snuggly is also ideal for post-spaying or post-neutering stitches protection. Instead of putting an uncomfortable cone on your dog, slip a Surgi Snuggly over her body, insert a diaper pad, and let your pup heal in peace. Invented by a veterinarian who saw a need he could fill, this body suit comes in a size that can fit any dog.

We’ll be ordering one for Eira when she gets spayed later this summer!

You get two awesome diapers for one price with this diaper—it’s what we bought Eira, and is the diaper featured in the video above. This diaper is roomy enough for either males or females and has that handy hole for a tail. Eira’s been using her SoPhresh diapers for three days now, and we haven’t had any leaks! We’ve also put them through the washer and dryer, and they’ve held up perfectly so far. 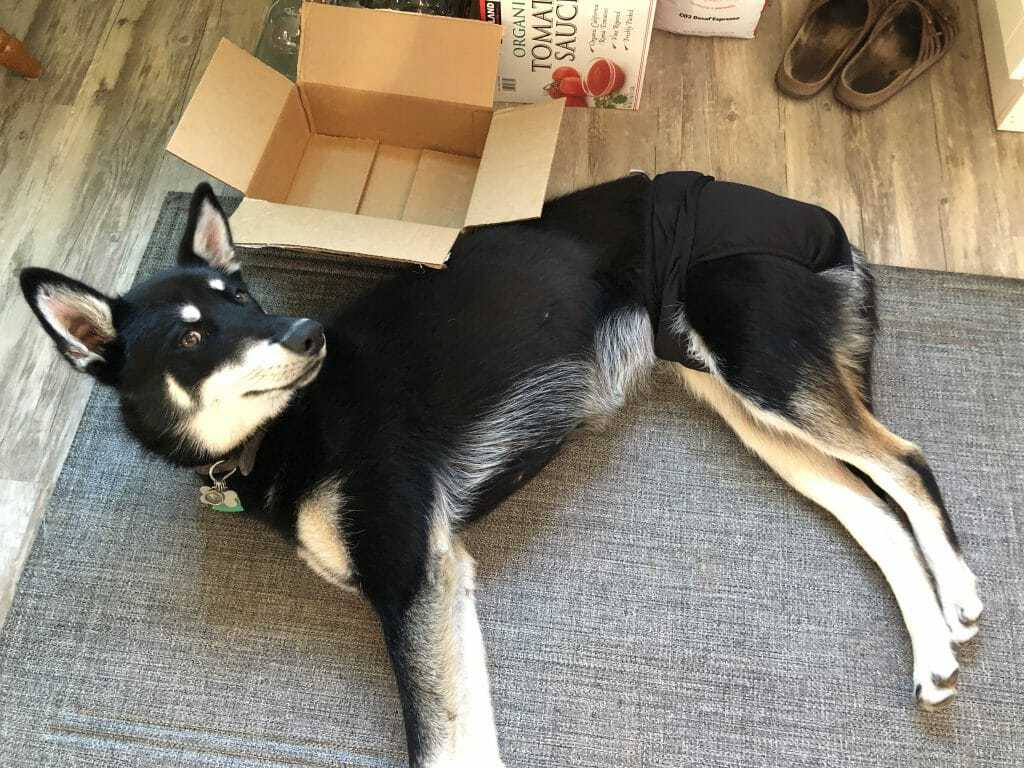 Eira in her SoPhresh diaper.

I don’t know how well this diaper holds up under the pressure of urine or feces because we make sure to give Eira plenty of diaper-free potty breaks. But the mesh is super absorbent and the material is durable, so I’m guessing the diapers do a good job with any fluids or solids a dog could eliminate.

Eira has the ‘extra-large’ size and it fits her well because of the adjustable velcro. She definitely has room to grow into it, though. 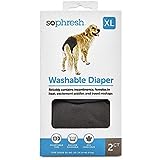 While we love our SoPhresh diapers, we’re thinking of ordering a pack of PetParents diapers for use with the Surgi Snuggly when Eira gets spayed. These ones have a waterproof outer layer to keep all your carpets, floors, and furniture free of pee, and are extra absorbent with a slightly more comfortable-looking tail hole. And for a lower price, each pack comes with three washable diapers.

LIke the SoPhresh diaper, the PetParents diapers are for both male and female dog use. 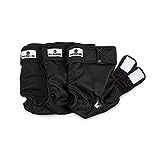 Also, the price for these diapers is unbeatable. You’ll pay much more for disposable diapers from your local pet store. 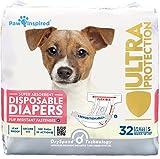 These are the best disposable wraps we found for male dogs who need extra help with urinary incontinence. And they even have a wetness indicator to let you know when your dog has gone pee in his diaper so you can change it before it gets uncomfortable (although with their instant-dry technology, these wraps feel dry longer than a washable diaper). 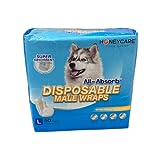 If your small dog or puppy is struggling with potty issues but wants to stay stylish, these small-dog diapers are a perfect solution to her (or his) problems. Meant for dogs as light as 3.5 pounds, these diapers feature cute fabric prints that make your dog look like she’s wearing jeans or colorful shorts—not a diaper. 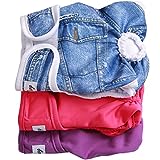 Perfect for an active dog in heat, these diapers are made from breathable sport material that wicks away moisture. You can insert a pantiliner or pad (or even tissues) according to how much your dog is bleeding, and you’ll rest in the knowledge that she’s comfortable while running and playing.

If you’ve decided not to spay your dog for breeding purposes, you’ll want to get her several packs of these diapers to keep her comfortable and active during her heat cycle. 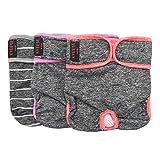 Finally, a lightweight female dog diaper that comes with its own pads! This wonderful washable dog diaper liner and pad set eliminates making two purchases or finding two different brands that fit together to maximize your dog’s comfort. Instead, you simply pop a pad into the liner and change either just the liner or the entire diaper when needed—it’s up to you. This can save you on laundry, big-time.

The removable pad attaches to the diaper liner with button snaps, so you can rest assured it won’t fall out. 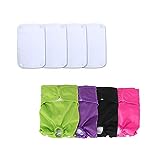 Now That You Know All About Dog Diapers…

Let us know if you’ve ever used one! And if you haven’t, you might want to put some of the above diapers on your shopping list for emergencies. 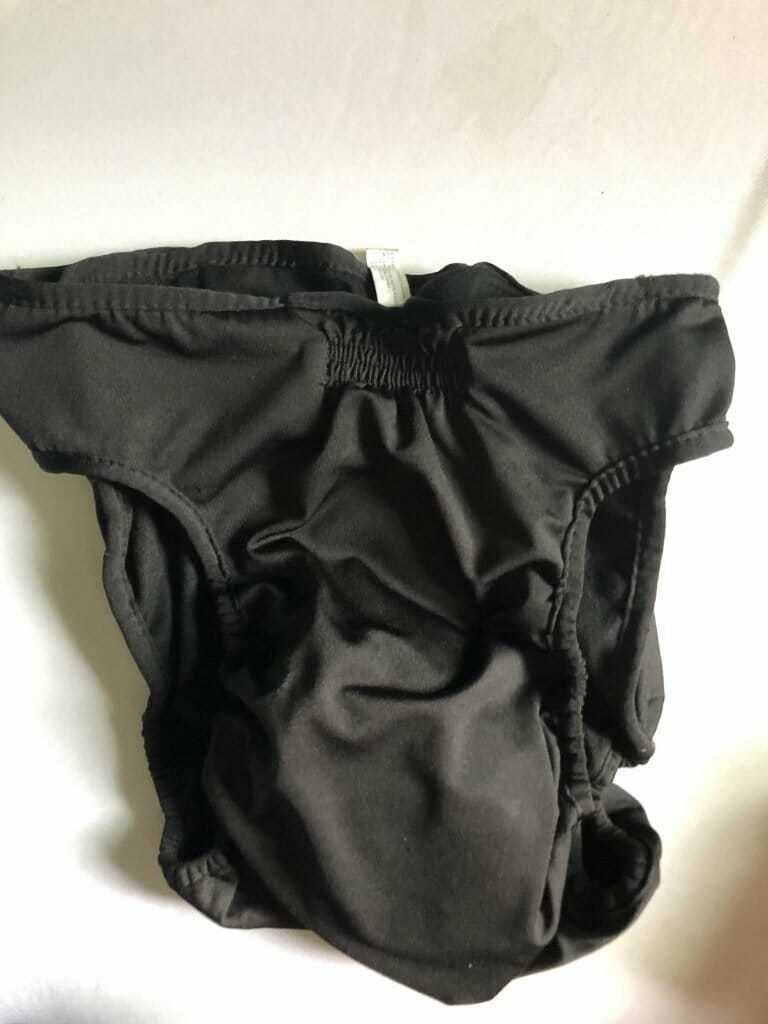 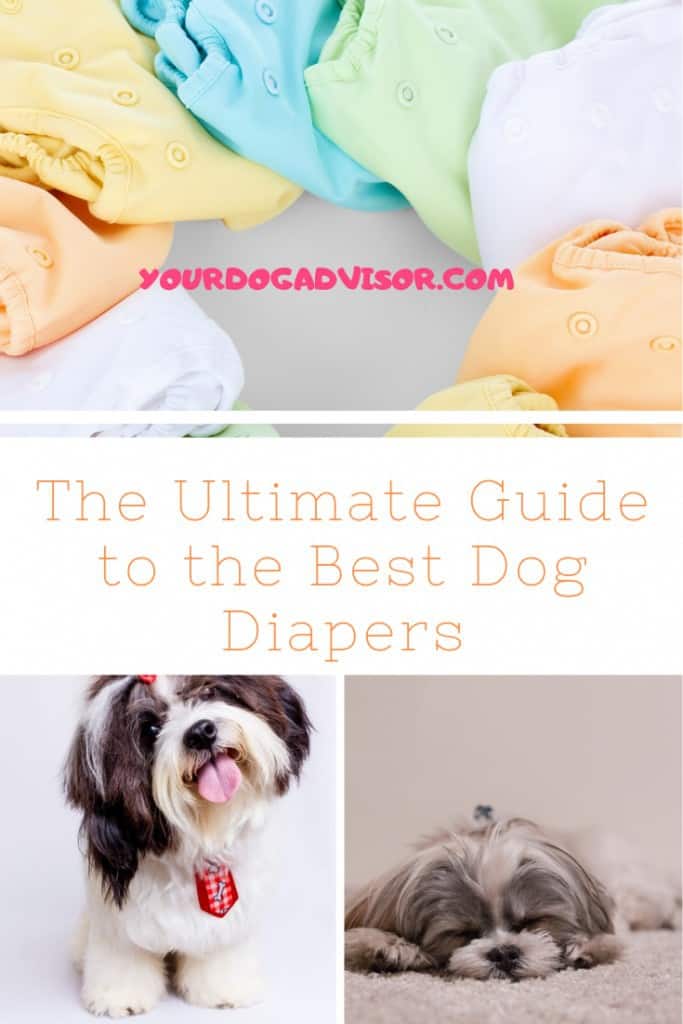