When I was growing up, our German shepherds weren’t inside dogs. They got to hang out in the laundry room on cold winter days and nights, but during the day they were out in their spacious, snowy yard. A certain family member of mine didn’t like dog hair everywhere and also, we lived in a rental home that didn’t need to get chewed up. Once, one of Clancy’s babies chewed the outdoor siding of our rental, and that was awful! Years later, Bella did the same thing to a rental my husband and I were living in. We’d put her outside while we went to get Indian food, and when we got back, she’d chewed the siding off a corner of the house trying to get back inside. I think she had some psychological issues surrounding coming inside; she feared that once put back outside, she’d never get to come inside again and thus stayed outside as little as possible. Eventually, we had to crate her when we left the house so that she stayed safe and the house didn’t get chewed.

From the start, we’ve followed a different path for our Alaskan shepherd, Eira. She loves to spend time inside and does so every day! But as we learned when she recently got spayed, she doesn’t want to be stuck inside all day long. So she spends a fair amount of time enjoying the fresh air, too. As a puppy, Eira chewed things constantly. I remember at night, I’d pick everything chewable up off the floor and hope that she wouldn’t get ahold of the table legs or couch in the night.

But that became a task I didn’t feel like doing nightly — and it’s gotten even more pronounced now that my three-year-old son has developed a deep love of trains. 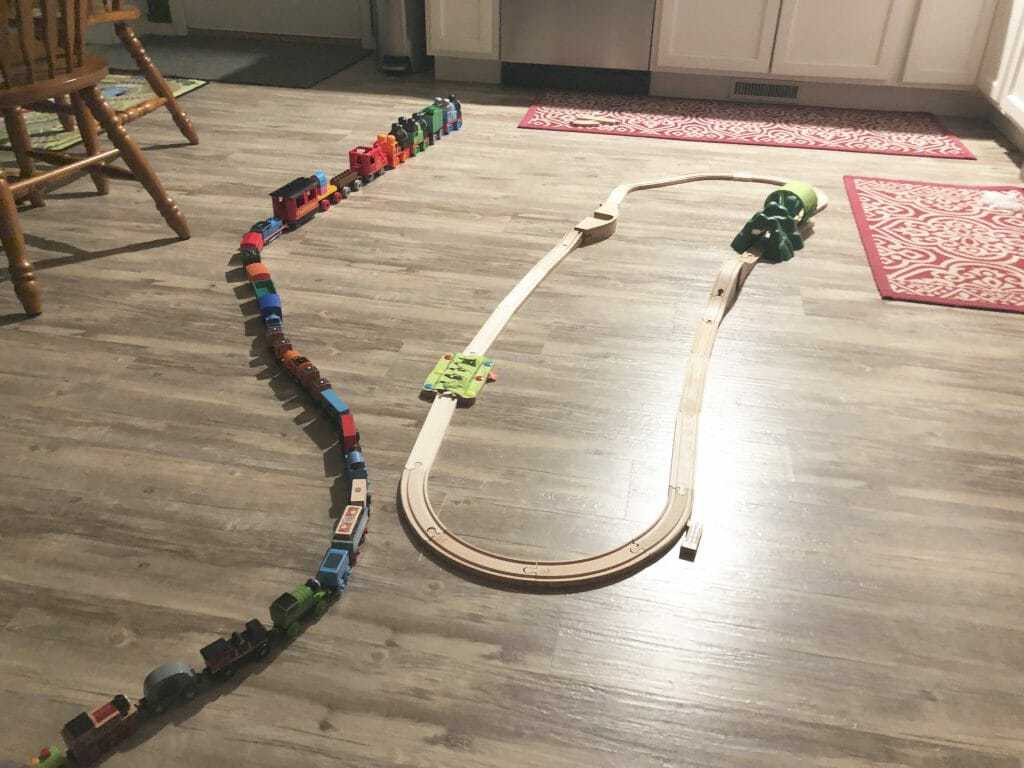 My toddler currently adores trains — and has lots of them, too!

He often creates long, elaborate trains that take up lots of floor space. A lot of the trains and tracks are wooden. And dogs love to chew wooden things. Recently, Eira got ahold of a train and gave it a brief chew, which traumatized my Thomas-loving son. So I knew that in order to keep the peace between them, I needed to figure out a solution. 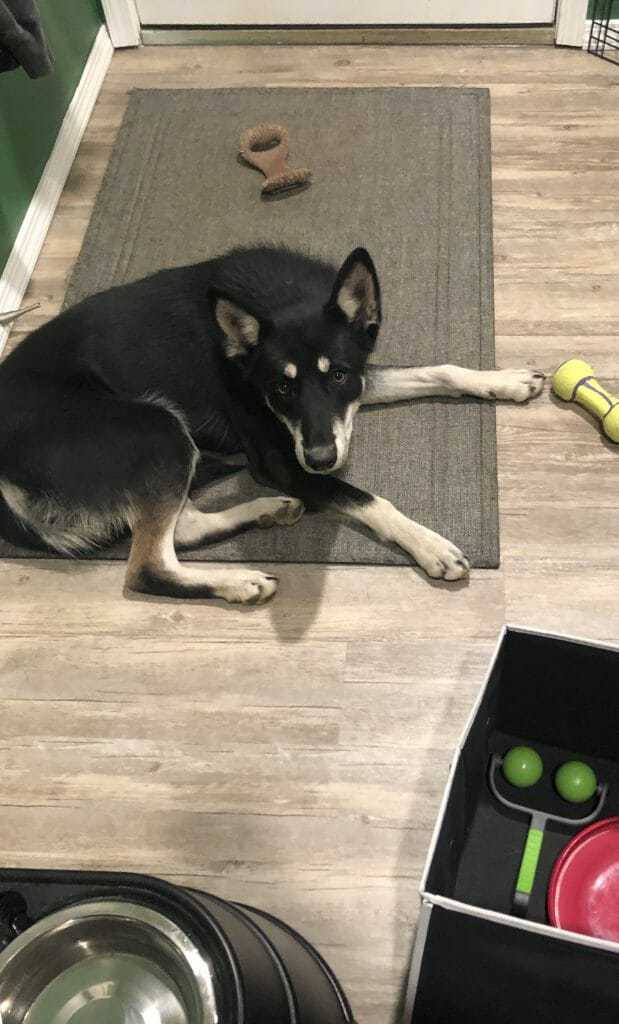 Despite having plenty of toys around — the Benebone is still her favorite — Eira sometimes prefers to chew wooden trains!

That’s when I stumbled across the life-saving magic of anti-chew spray. Designed to make a non-chewable item bitter to the would-be canine chewer, anti-chew spray seemed like the best answer to my problem. But, I wondered, would I have to spray all of my son’s trains? Or would spraying a few of them do the trick to make Eira know they tasted yucky?

The anti-chew spray I chose

After doing some research into all the options on the market, I decided on Suca Pets Premium Anti-Chew Spray. My favorite thing about this spray is its short ingredients list and the fact that it’s safe for dogs if they do get their tongues on it. All it contains is deionized water, witch hazel, and natural bitter agents.

Witch hazel is safe for dogs to ingest in small amounts and can be used to relieve various skin problems, too, but hopefully your dog doesn’t ingest any of it because the point is for them to NOT enjoy the anti-chew spray.

So how did it go with Eira? I decided to go the route of just spraying a few of the wooden trains and letting her sniff and decide what to do. If she was still a puppy, I would probably spray all the trains, as well as the house’s base molding (which she chewed last year as a puppy), as well as the brake shift in my car, which she chewed last year, and pretty much the entire house. But her chewing bouts are sporadic and seemingly limited to the irresistible wooden Thomas trains.

The directions on the spray say to spritz an object 3-10 times, depending on the object’s size and length. I sprayed Harold the Helicopter first because Eira has tried to steal this one away from my son before. 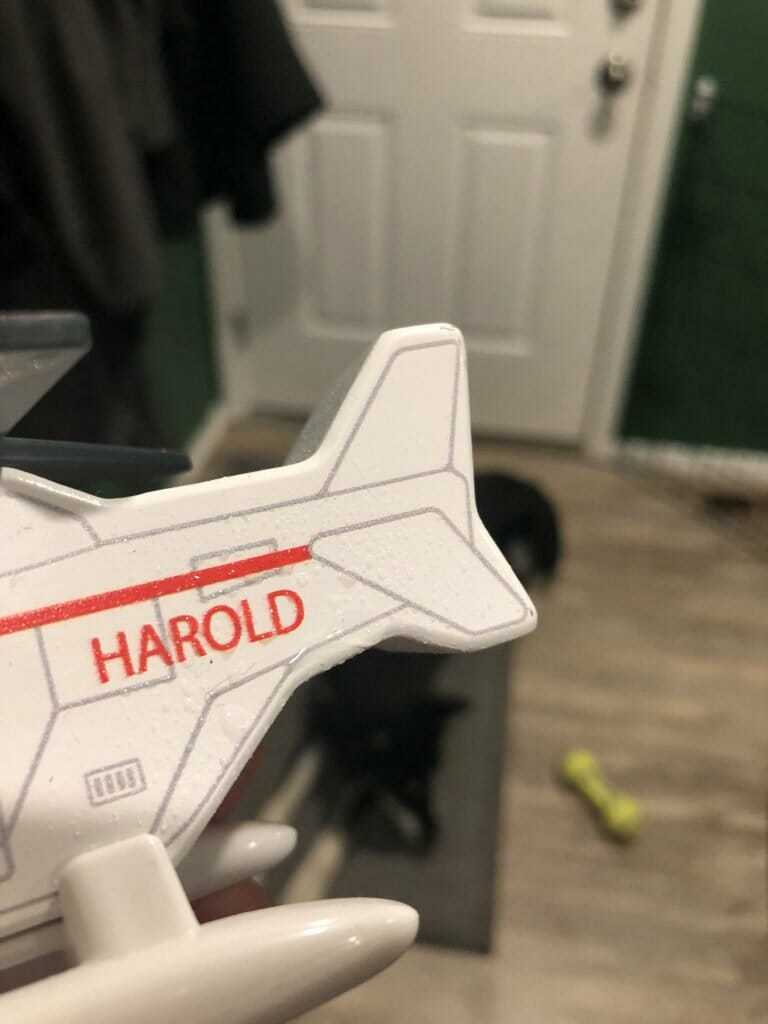 Harold the Helicopter gets sprayed with anti-chew solution.

The spray smells slightly medical, like gauze or antiseptic spray, but it’s not unpleasant or overly strong. I let Eira sniff the spray. She did not lick it. I left the toy near her for a few minutes while I left the room to do something else. When I came back, Eira had not touched the toy. I honestly think the smell alone alerted her that this was not something she wanted to put on her tongue! I sprayed a few more trains and then left them out all night.

That’s what I call a successful anti-chew spray. I wish I had had this when she was a puppy, or when Bella was trying to chew her way back into the house so many years ago. The spray bottle is actually pretty big for the price, and you can spray all sorts of things with it: your kids’ toys, your furniture, electrical cords the dog shouldn’t chew for her own safety, houseplants that might be toxic to your dog, clothing, shoes (which is a big one! Eira used to love stealing shoes and boots to chew, and she chewed up my toddler’s expensive Bogs boots last year!), and more.

If you want to try the Suca Anti-Chew Spray, which I highly recommend for new puppies, you can find it below. 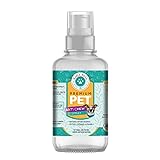 If the Suca spray doesn’t work for you or you prefer to try something different, we have several more top picks below.

If you have a super-chewer on your hands and it seems like nothing is working, this alcohol-free formula might do the trick. It doubles as a anti-hotspot spray with soothing tea tree oil— keep hotspots away and soothe them at the same time! The ingredients in this spray are purified water, emulsifier, bitter agents, and tea tree oil. You can spray it on anything, just as with the Suca spray, but Rocco & Roxie recommends you spot-test cherished shoes, fabrics, or furniture first to make sure the spray does not change the color. 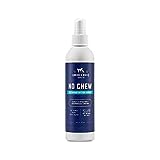 We all know puppies love to chew, but some adult dogs persist in their chewing habits and sprays designed for puppies won’t work for them. Emmy’s spray claims to be formulated to stop puppies AND adult dogs from chewing things, and it makes use of lemongrass oil along with bitter agents to keep pups from chewing. It also contains things like propylene glycol, though, and isn’t as pure as other sprays, so you may not want to use it on young puppies, and you’ll want to keep an eye on older dogs who are around it. And with all anti-chew sprays, be sure to store them out of reach of both children and pets! 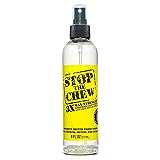 This anti-chew spray relies on baking soda, emulsifiers, and fragrance oils to keep dogs from gobbling up inedible things. One of the reasons we’ve listed several different anti-chew sprays with different ingredients is that it’s possible one ingredient will deter your dog more than another will. So if one spray doesn’t work, return it! Most have a 100 percent satisfaction guarantee. Then try another spray until you find one that works for your dog. Also, keep in mind that you can’t spray something one day and expect it to be potent several days later. If your dog persists in wanting to chew your favorite shoes, spray them daily. When people ask you why your shoes smell funny, show them a picture of your puppy. They’ll understand! 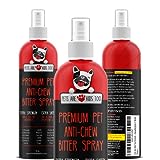 Pets Are Kids Too Spray
Buy on Amazon 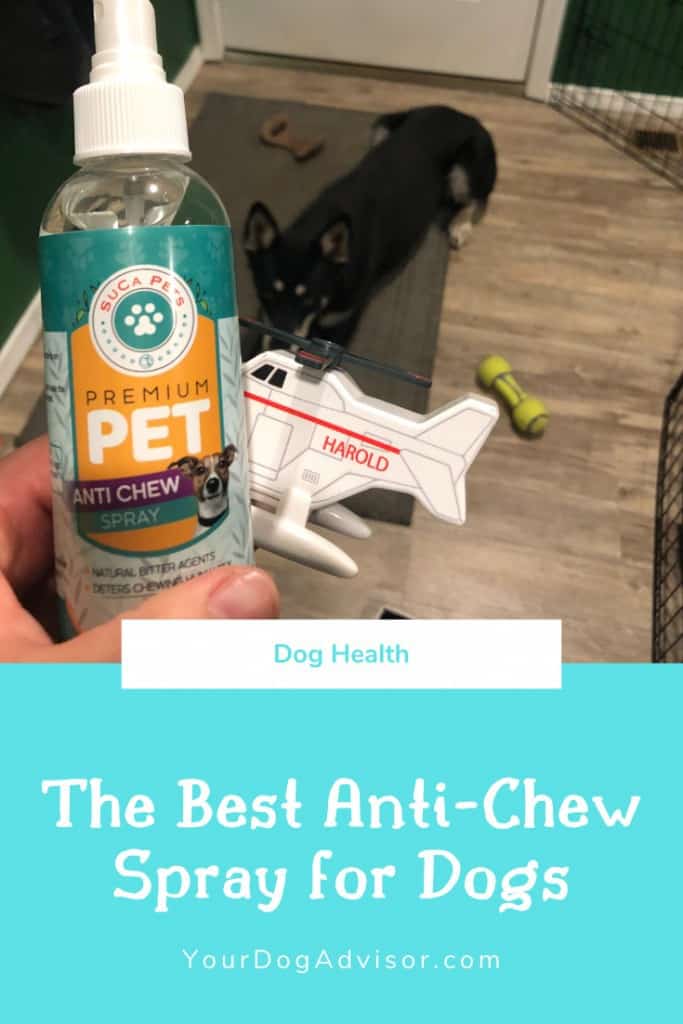